RVing in Key West after Irma

The only thing we knew about Key West prior to visiting was that it was the Southernmost point in Florida. We also knew it had been ravaged by Hurricane Irma just three months prior to our visit, but had no idea what to expect. Luckily, we were pleasantly surprised that we were still able to enjoy all of the go-to Key West activities.

Booking a Campsite in Key West

After learning that it was almost a three-hour drive on a single road, Route 1, to get to the actual city of Key West without a single Walmart or Cracker Barrel to boondock at, we decided to bite the bullet and book an actual campsite. We usually limit our campground stays to when we need to dump our black/grey tanks, fill our potable water, and charge a lot of electronics. Or if we simply just want to spread out and relax for a day. 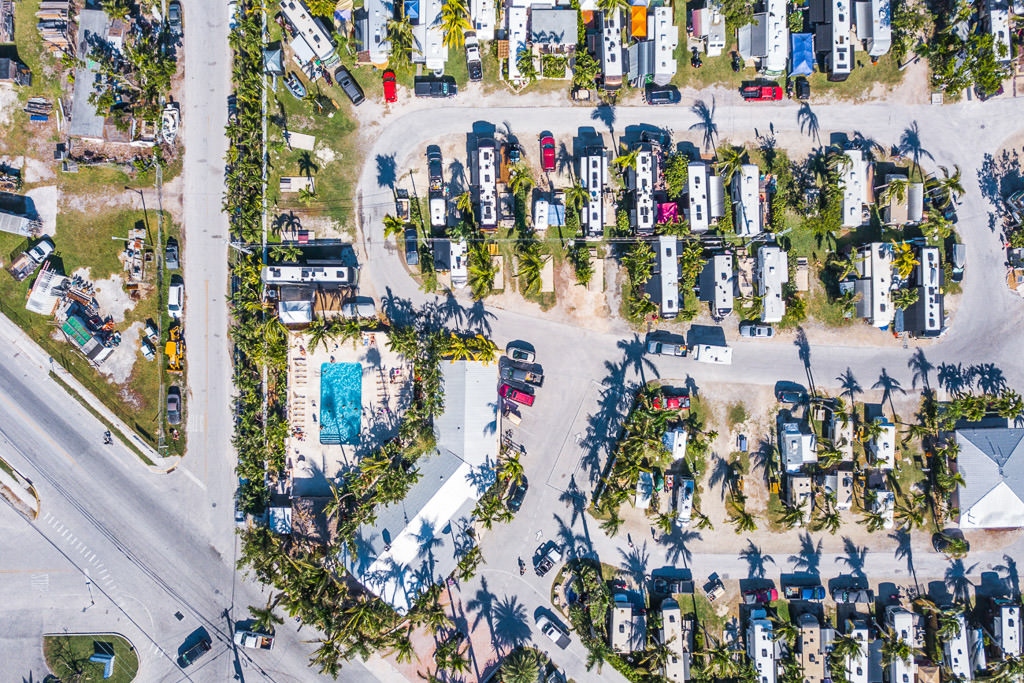 On average we only stay at campgrounds once a week, but this time it was Christmas, so we decided to splurge. Many of the state parks and privately-owned campgrounds were decimated during the hurricane and some project they won't even be ready to reopen until 2019. So, with limited supply, we jumped on the last available site at Boyds Key West Campground, the second closest campground to Key West, located on Stock Island, a short 10-minute drive from all the action. 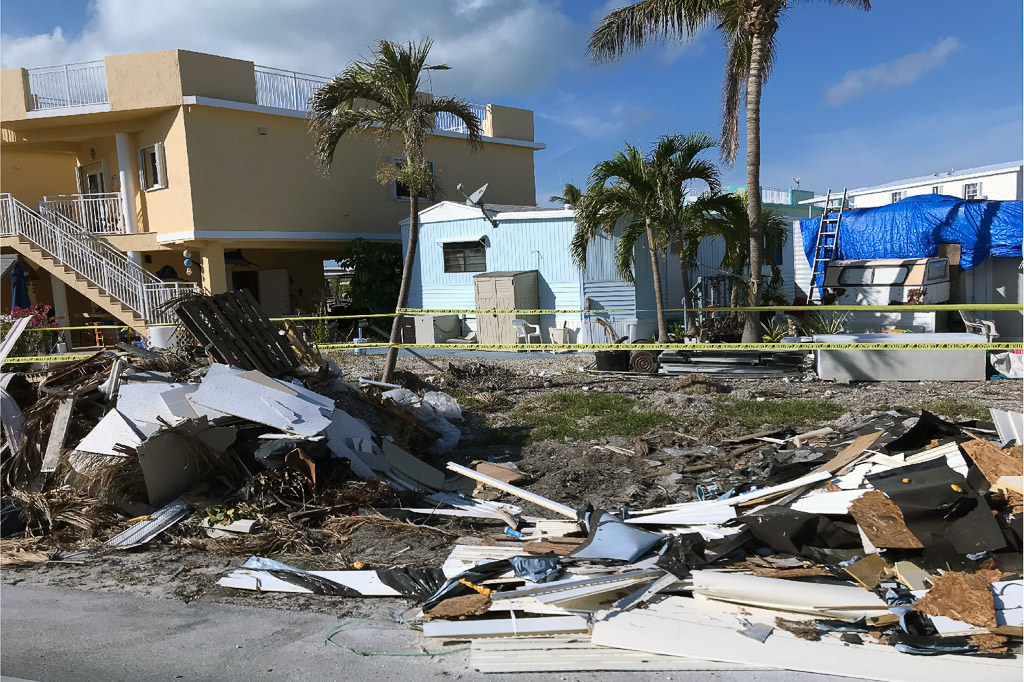 Typical roadside on the way to Key West.

We were a little concerned after seeing the miles of debris that was piled along the sides of Route 1 that we may not be going to the paradise we were expecting, but that feeling quickly changed as we pulled into Boyds. Although the sites are very tightly packed, the place runs like a well-oiled machine with 24-hour security, clean bathrooms, game room, pool, and fully stocked camp/gift shop. 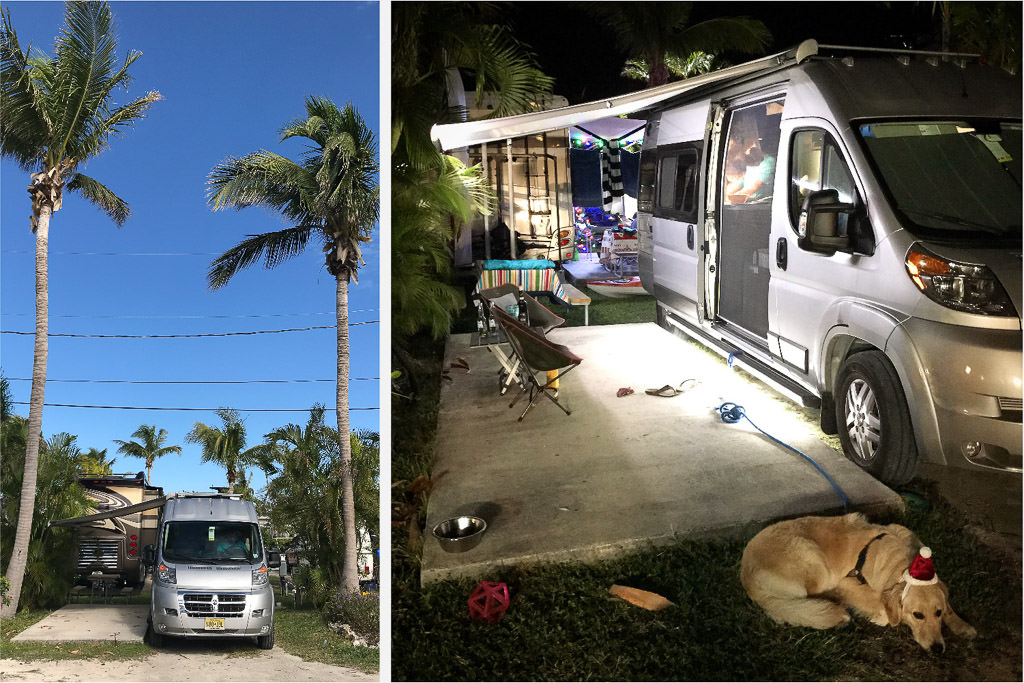 Our setup at Boyds. Lucy is waiting for Santa!

Everyone was in the Christmas spirit and we spent every nightly dog walk admiring the festive RV lights. The day we arrived, the campground ran a trolley for campers to see the various Christmas lights around town, but we were unfortunately too late for it. We did, however, get to see campground Santa and Mrs. Clause on Christmas Eve.

We ventured into town on Christmas Eve, with the first stop of course being the dog beach on Vernon Ave. Once we got Lucy, our golden retriever, as tired out as possible, we walked a few blocks down to the Southernmost Point (in the Continental U.S.) Marker. 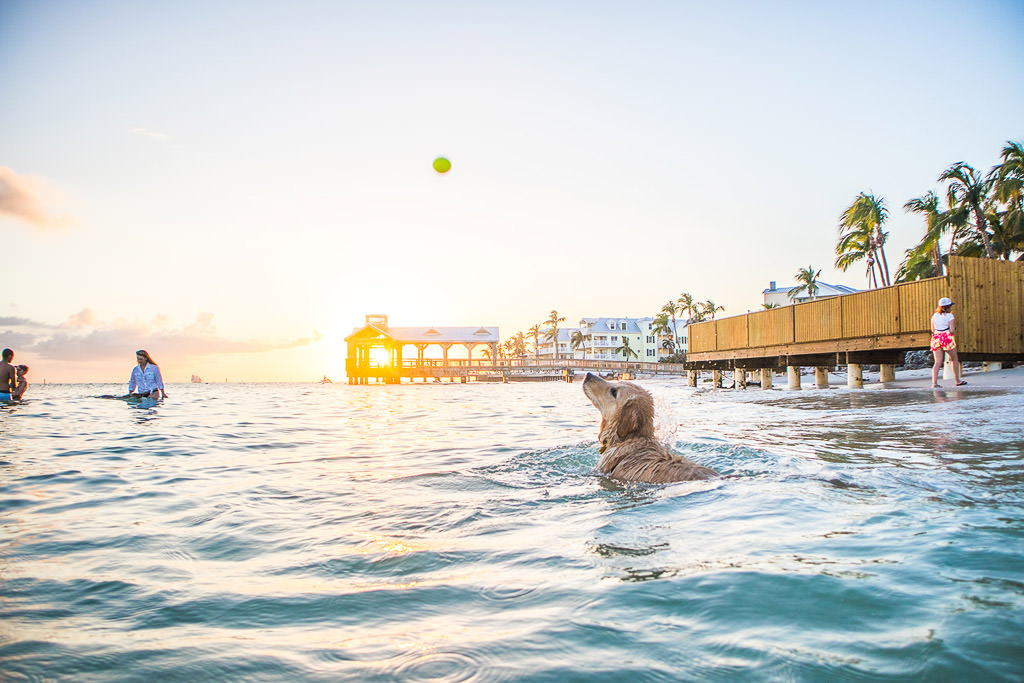 A popular tourist attraction, we didn't want to wait in line for a photo, so we just photobombed someone else's shot. We took a brief drive around town just to familiarize ourselves with the area, expecting it to be a dead-zone, but it was a hot bed of activity both on Christmas Eve and Christmas Day. 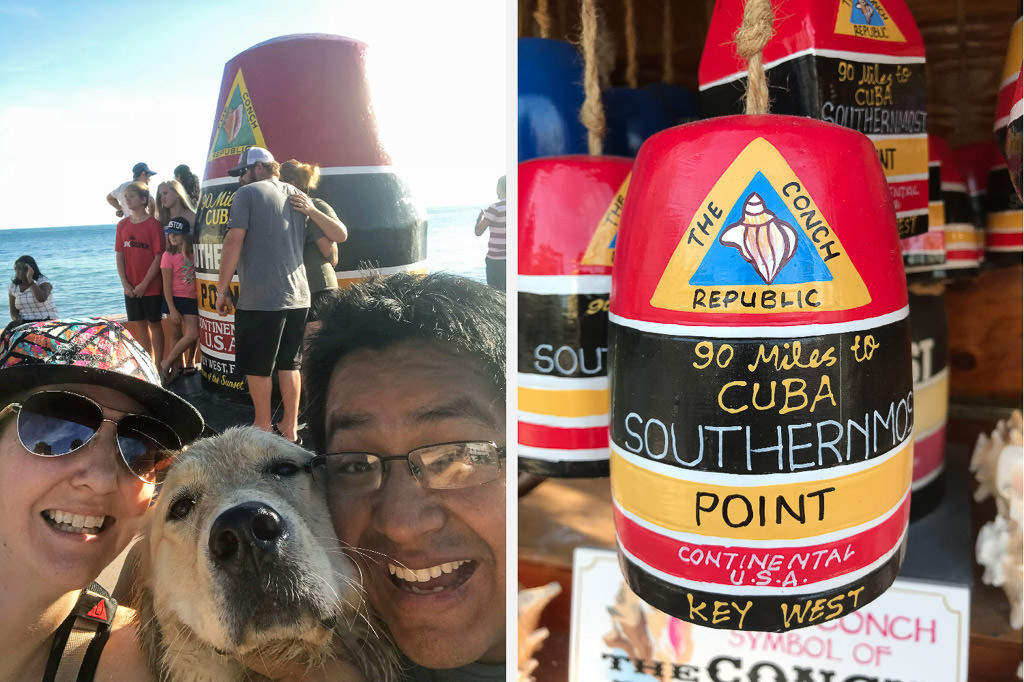 During our stay, we also explored Mallory Square and ate some conch fritters and empanadas on the dock at sunset. This is the perfect place to be for all sunsets in Key West, as it is full of street performers, artisans, and delicious pineapple drinks. 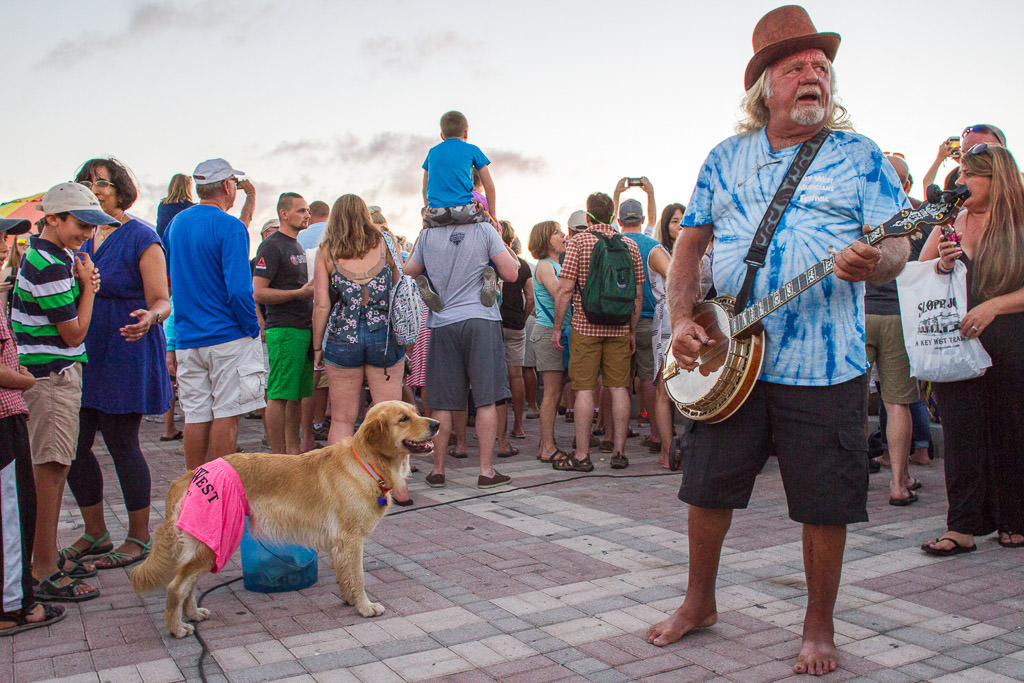 This golden retriever collects tips and drops them in the bucket!

We wandered Duval Street and ended the night as we did any other night in the Keys, with a slice of Key Lime Pie from Kermit's, my favorite of the four places I tried ... and yes, I tried both Kermit's locations just to make sure it wasn't a fluke. 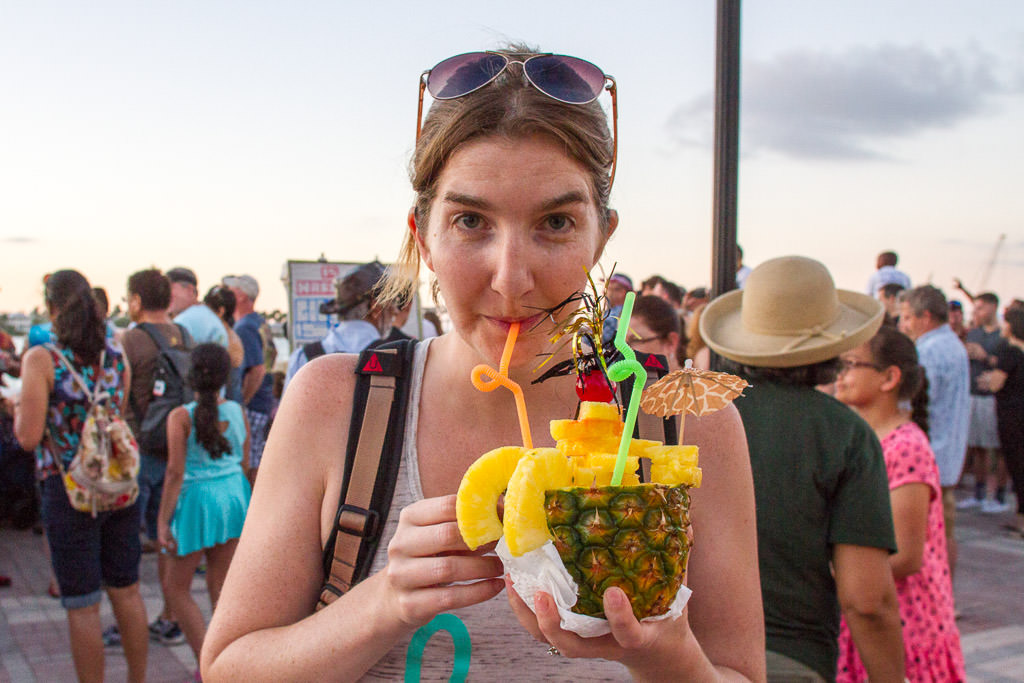 My favorite drink in Key West!

The day after Christmas, I took a tour of the Ernest Hemingway House on Whitehead Street. I am not a cat person by any means, but part of the draw to take the tour is to see the 54 cats that inhabit the property. About half of the cats have 6 toes and a lot of them are descendants of Hemingway's original cat Snow White. They have names like: Mark Twain, Pablo Picasso, and Elizabeth Taylor: the vixen of the house since she is the only cat who escaped the house's one-litter-only rule to have a second litter. 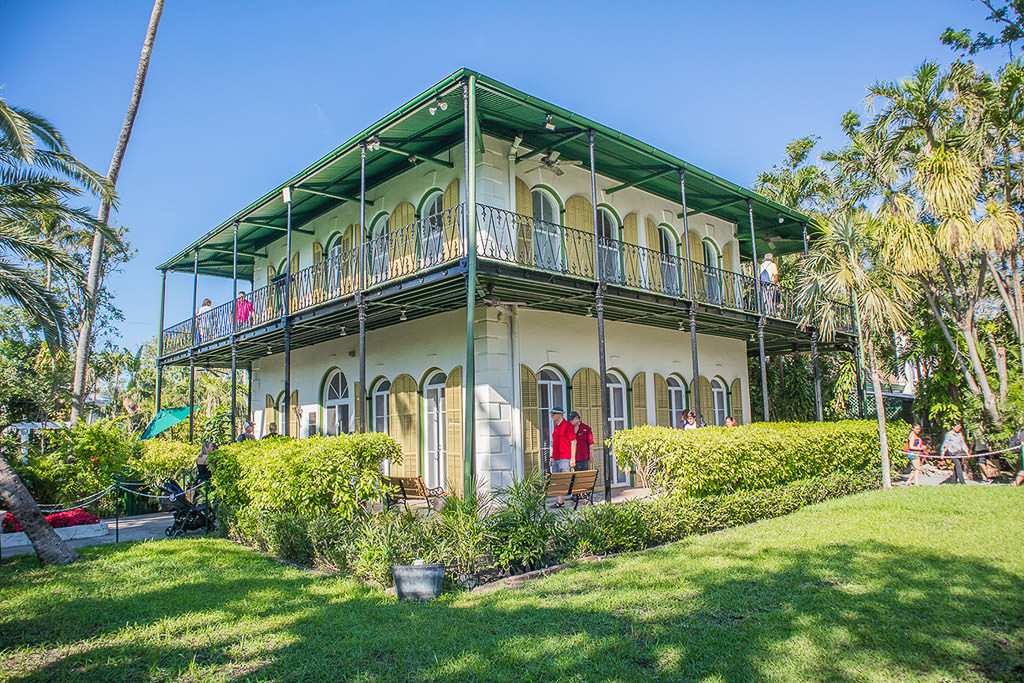 Ten staffers stayed in the house during Irma with the cats and they all survived. The house, which is the highest point in Key West at 15-ft above sea level, sustained minimal damage compared to the towns north of Key West, in which many residents are still displaced. Clearly, I was focused on finding as many cats as possible during the 30-minute tour. Although, the guide was fantastic and even if you know nothing about Ernest Hemingway, the tour was very entertaining. 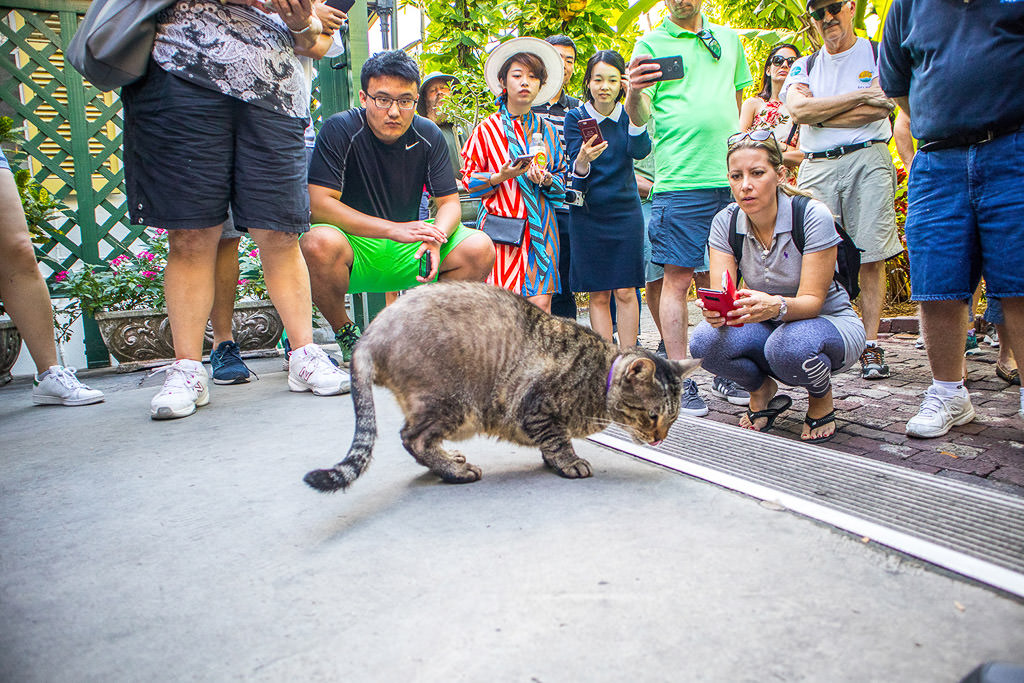 6-Toed cats are the stars of the tour.

Getting on the Water

On our last day in Key West we found Lazy Dog Adventures, a dog-friendly stand-up paddle (SUP) board and kayak rental company along the Cow Key Channel separating Key West from Stock Island and only a few minutes' drive from the campground. After a quick SUP lesson we were off, Humberto and Lucy in the kayak and I on the SUP. 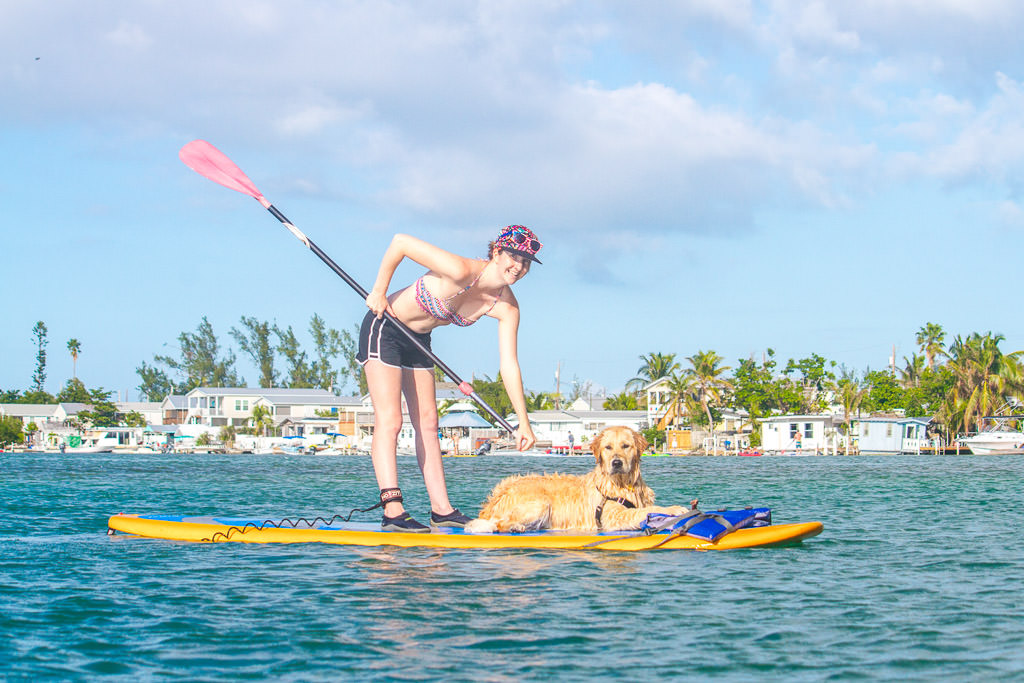 It was a shaky experience at first, but she finally got the hang of it!

Although by the end, Lucy abandoned the kayak for the SUP. She loved pulling seaweed out of the water as I paddled her around. They had a dog (and people) wash station so that we didn't have to waste any water washing Lucy from our van.

One more sunset, seafood dinner, and Key Lime pie in town and we set off for our long drive off the island. About an hour into our journey, we realized we really wanted to do the drive during daylight, so we tested our luck by boondocking at a random boat launch. We've heard that Key West is not very good for boondocking, but thankfully we made it through the night without the dreaded 2.a.m knock.

Our last stop, before heading back to Miami the next morning, was the Old Bahia Honda Bridge which was great for photos and we even got to witness a shark rescue!

Overall, we had a great trip and did not feel that the recent storm prevented us from enjoying any of the Key West activities we were looking forward to. Our main suggestion would be to make sure you secure a campground before your trip, since they can book up very quickly and there are not many boondocking options. It may take a while for Key West to completely recover, but don't let that stop you from making the trip!

For more from the Gunn family, check out their blog: AdventureGunn.com.