The state of Florida has some of the best State Parks for camping. Plus, there are also county parks which add to this great mix, as well as all the levels of private RV parks you would expect - from the very basic to the resorts. Staying out of the cold or enjoying swims in the gulf in warmer weather makes traveling the Gulf Coast ideal for any time of year. We love that there are so many sights along the drive and so many great places to camp in our Winnebago! 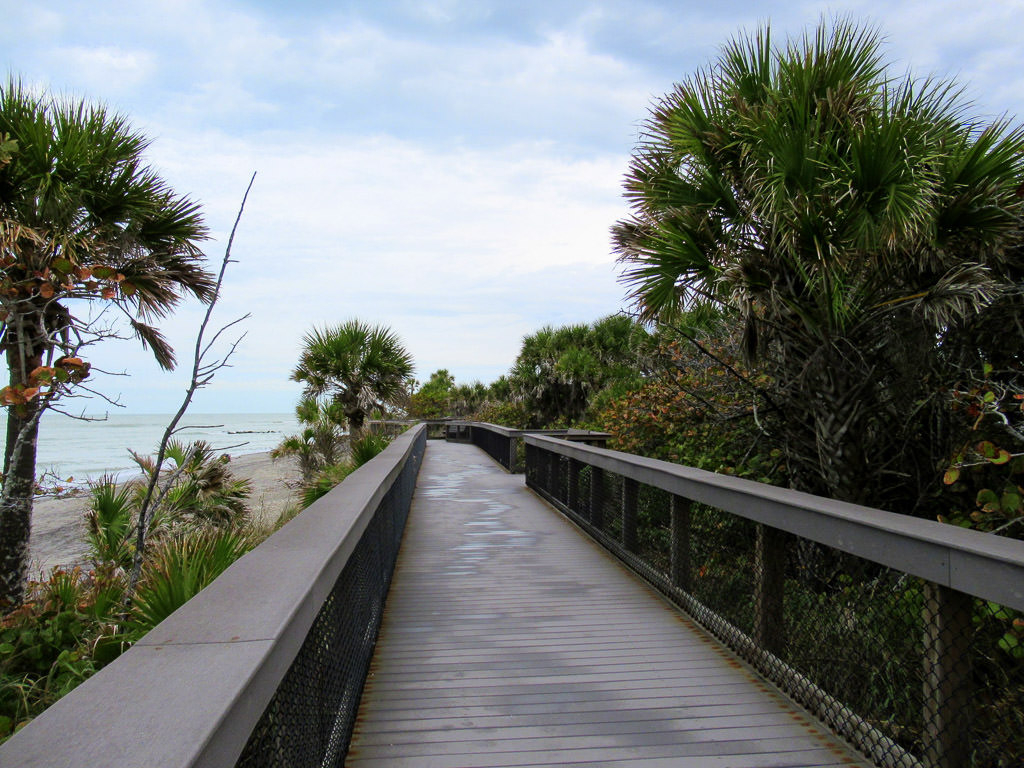 Favorite campsites along the Gulf Coast (from north to south)

We start this journey 135 miles north of Tampa. Once the Gulf's terminus of David Levy Yulee's Florida Railroad, the first in the state, Cedar Key became a major port for shipments to Central and South America. This Gulf Key derived its name from the groves of cedar trees which were decimated in the manufacturing of pencils.

We camped at a small RV park and motel, Low Key Hideaway, which included our own deck on the bay, and a Tiki Bar a short walk from our campsite. There is good island biking and great award-winning clam chowder at Tony's Seafood. (We love the chowder so much that we order a case once a year and have it shipped to us up north!) 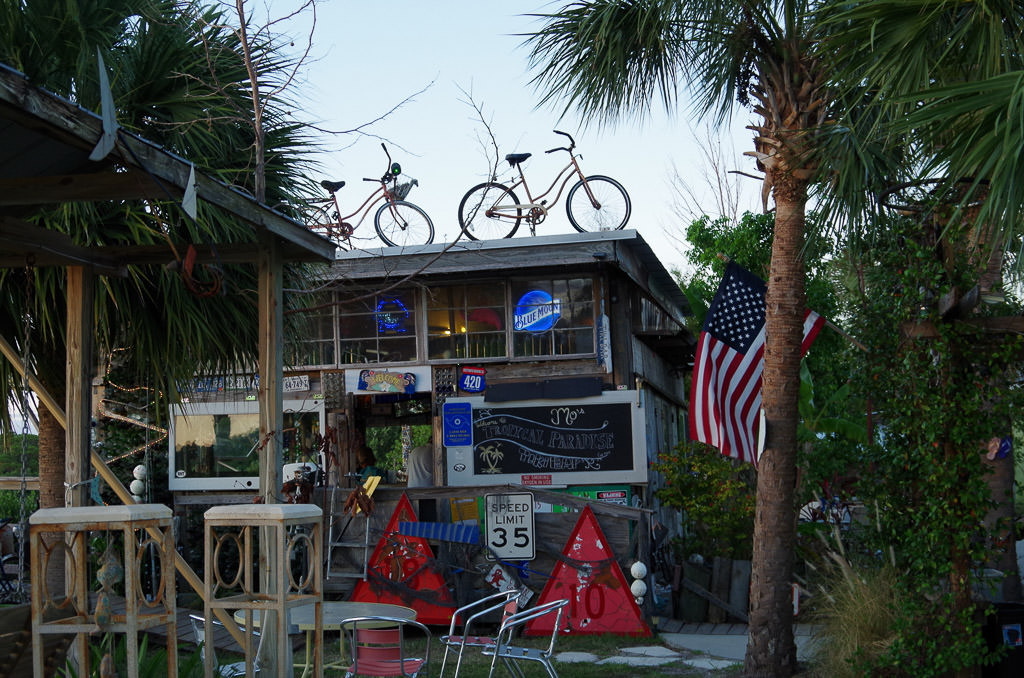 Pinellas County Park is our next camping stop traveling down the Gulf. Located at the southern tip of St. Petersburg, the campground boasts many secluded bay view sites. This park has two large swim centers with food and gift shops only steps from beautiful gulf beaches.

There are also ruins to tour of the namesake fort from the Spanish American War. From the park, there is also a tourist ferry to Edgemont Key where another, now partially submerged, fort can be toured via snorkeling from the boat. (Snorkels can be rented on board.) Visitors can disembark on the key either instead of the snorkel adventure, or in addition to it. Huge Gopher Tortoises roam this small island -- amazing to see! An added benefit of this county park is the more than eight miles of biking and pedestrian trails crisscrossing the peninsula. 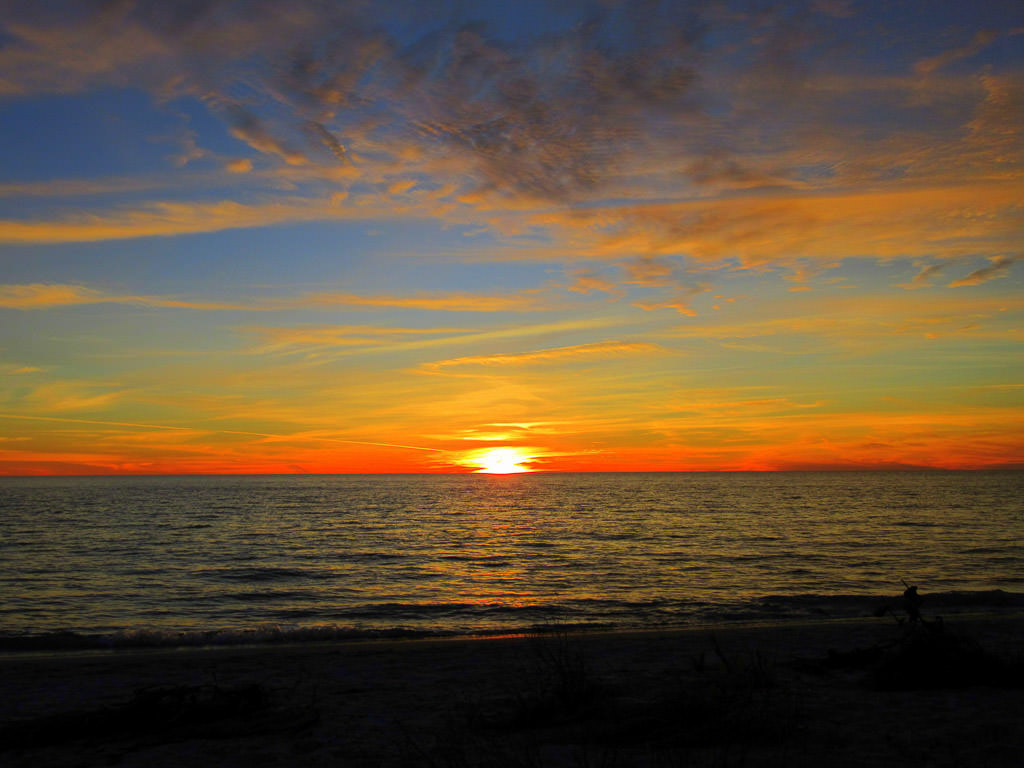 Our favorite campsite along this Gulf route is 15 miles south of Sarasota. Set inland less than a mile from the Gulf, this park has lots of daily activities including hiking, kayaking, nature walks/talks, music, campfire programs, morning stretching and more. Located adjacent to the ten-mile paved Legacy Bike trail, there is easy access to Venice Beach, and with the future expansion, Sarasota.

Many of the campsites here are relatively private due to heavy Florida foliage, and some of the sites are on the South Creek for added charm. However, it is challenging to get campsites due to the popularity of this park - with its close proximity to the beaches and the many cultural events, great restaurants and activities in Sarasota. 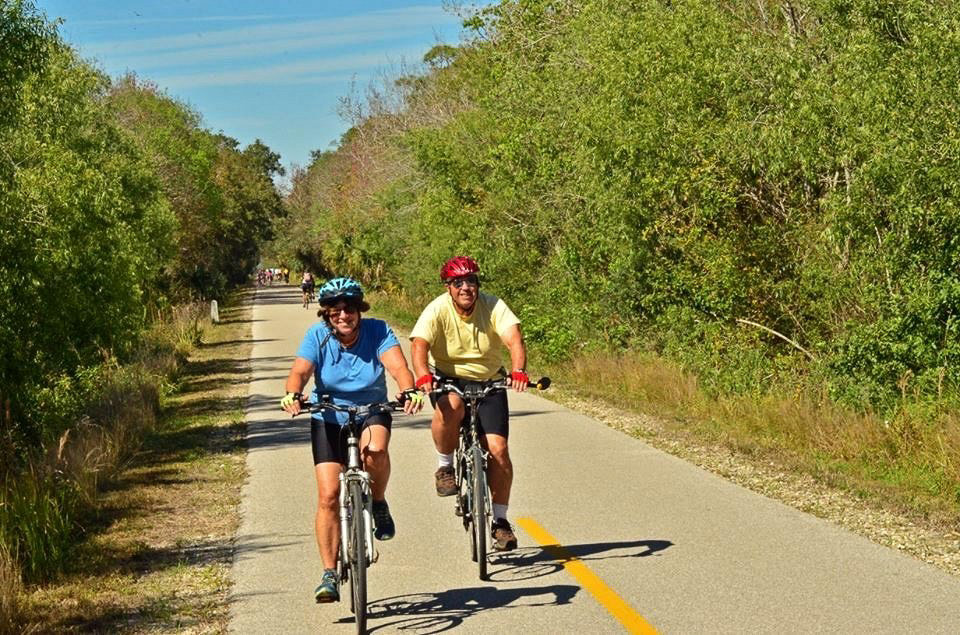 On the way to our next campground, we stopped just south of Naples at the Edison and Ford Estates. We were excited to find ample parking for our Winnebago. In fact, we were 'escorted' by an associate in a golf cart to the parking area for our vehicle.

On site, there is an excellent 15,000-square-foot museum showcasing Edison and Ford and their inventions and developed consumer products. There are many artifacts, historical cars, and videos, as well as the laboratory where Henry Ford worked to develop a synthetic rubber for WWII. A tour of Ford's winter home provided magnificent views and was the site for entertaining inventors and entrepreneurs of the early 20th century including Harvey Firestone and John Burroughs. 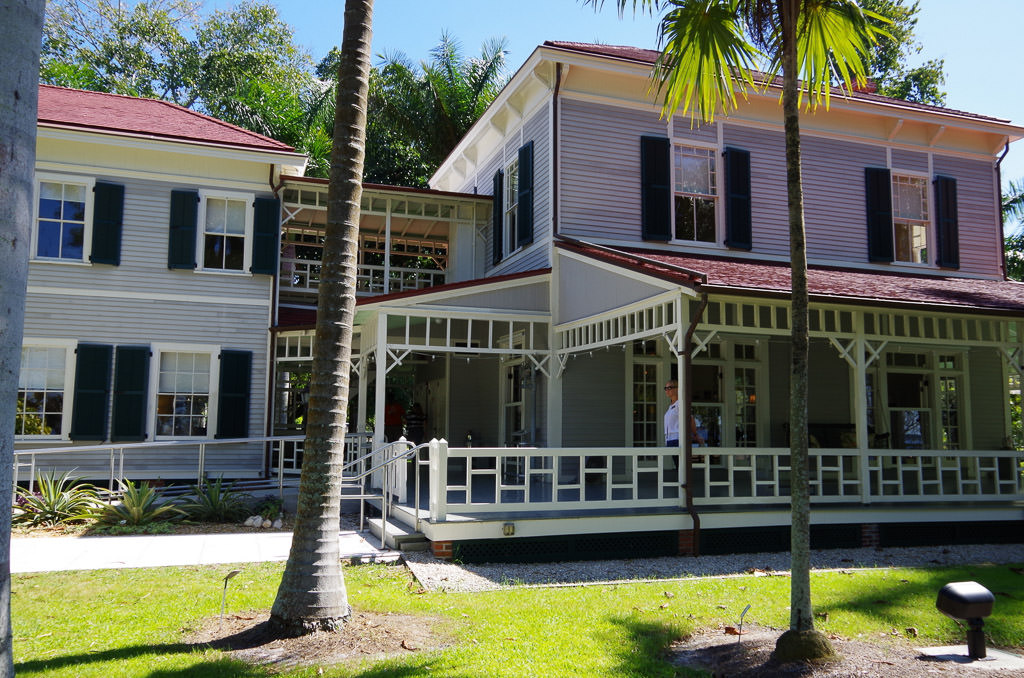 At this park, the state of Florida has restored 11 of the village buildings from the late 19th-century commune established by Dr. Cyrus Teed. He believed that the universe existed on the inside of a hollow Earth and created this settlement on the banks of the Estero River. Living as celibates, the Koreshans built and operated a successful farm, a nursery, and a botanical garden. The state campground is within the boundaries of the park and just a short walk along the Estero River. A fascinating tale of history. 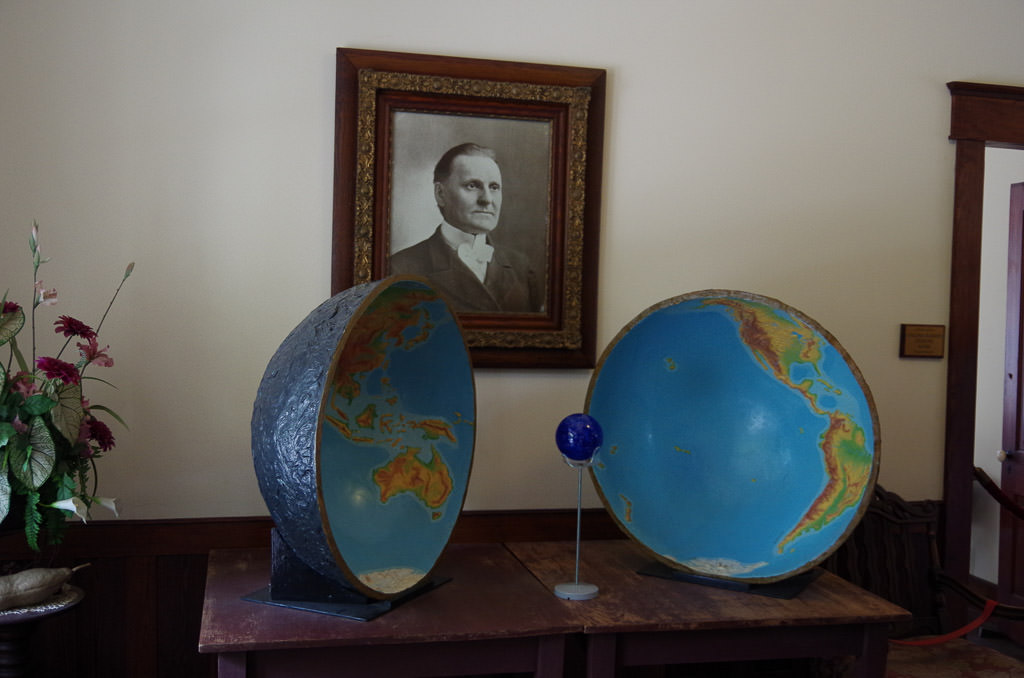 We end our camping tour on the mainland, a short drive from Marco Island. In addition to a recently updated and comfortable campground, Collier Seminole State Park has the last surviving Bay City Walking Dredge that was used to build the Tamiami Trail across the Everglades.

Nearby, in addition to Marco Island, there is the must-see Naples Botanical Gardens with a world-renowned Orchid collection. We also headed down to Everglades City and stopped at a local seafood restaurant that had the best stone crabs we've ever had. We met the owner who asked that we not publicize his restaurant as he's over 80 and has more business than he wants! 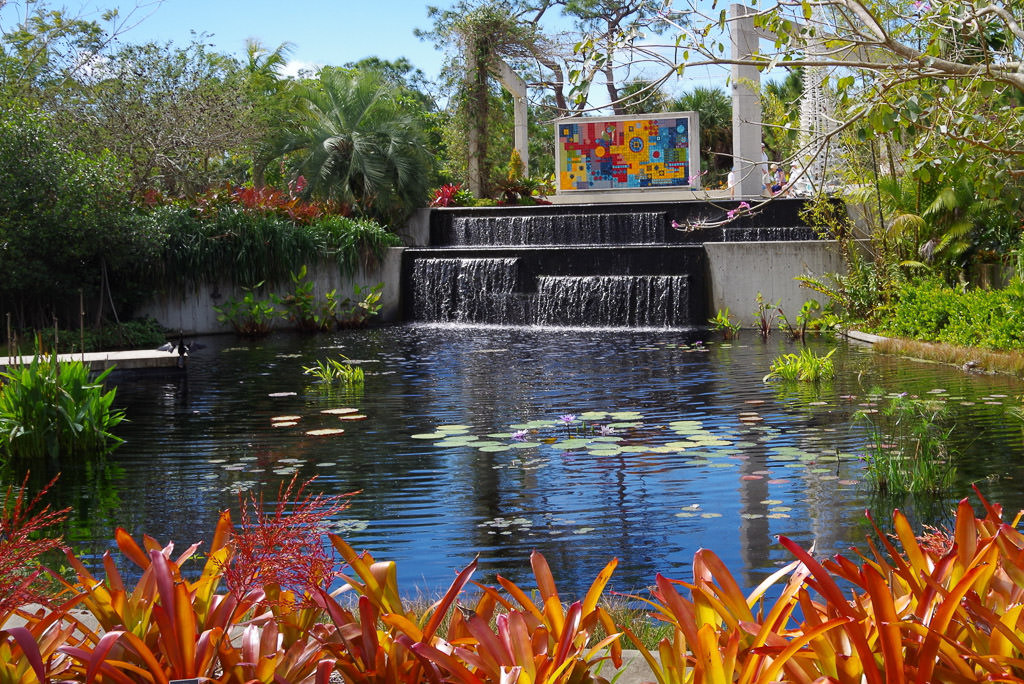 You can stay up to 14 days in one park, then you must leave for at least three days, if you plan to return to the same park. Florida State Parks are wildly busy during peak travel times, so planning way out into the future is imperative. You can book campground sites 11 months in advance at 8 a.m. Eastern time. During peak times, plan to have your site picked out and be ready to book at the exact time available. Go online and "Click" at 8:00.00 (maybe a few seconds earlier to allow for the Internet delay) and hope you were successful. Not all State Parks require this craziness. But in peak season at many of the coastal parks, plan on this method. (Talking to fellow campers, another option is keeping a watch for cancellations, and pounce when available). 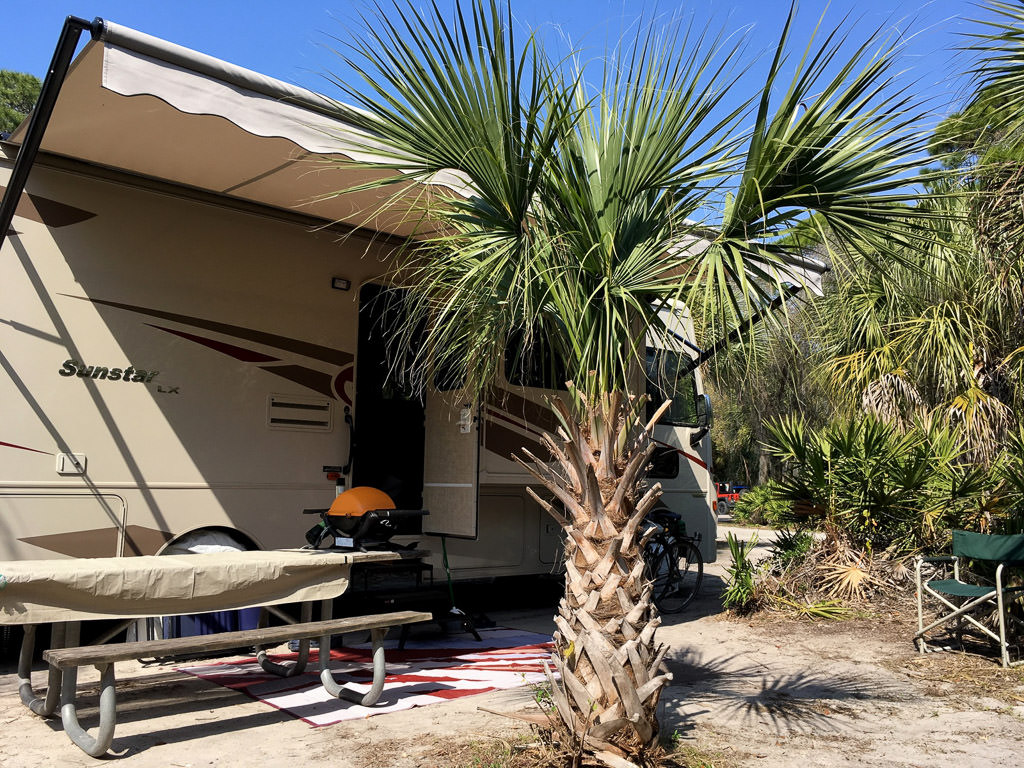 Limits vary more, but most allow for 14 days or longer. Reservations for these are six months in advance or longer, and booking starts right after midnight. These parks are usually not in as high demand, but booking early does improve site selection.

Surprisingly, well-located RV parks in highly popular areas may almost never be available. RVers rebook for the next year before leaving. So again, pre-planning is a must (or be left to sleep at a Walmart parking lot). 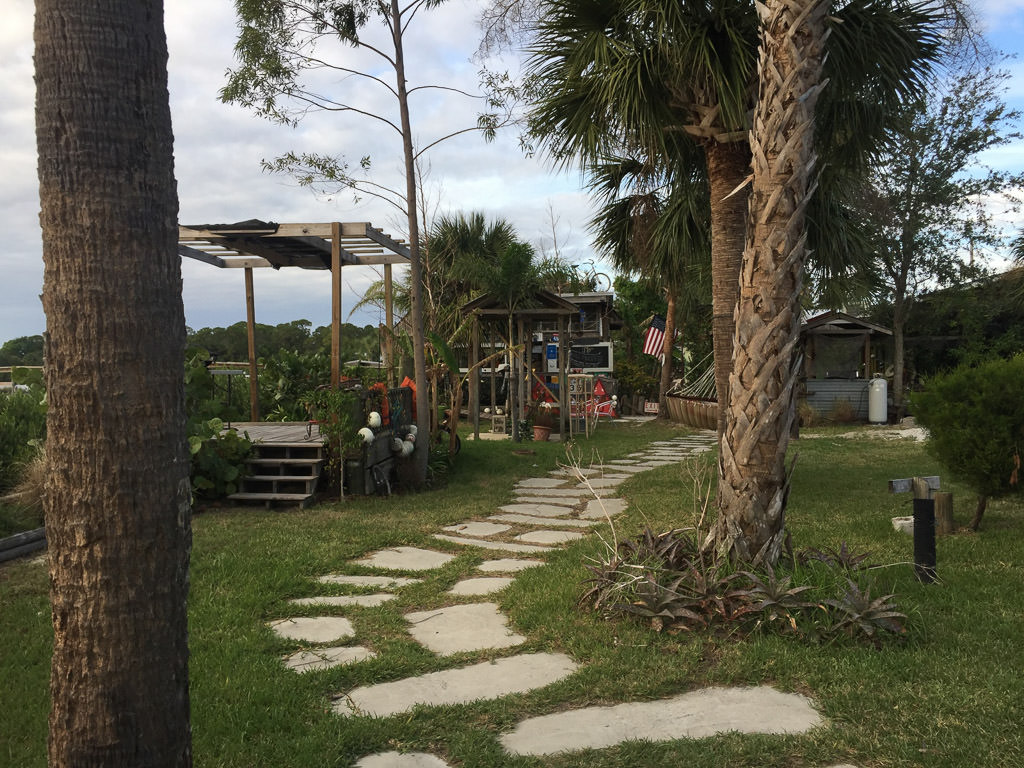 Enjoy the sun, the water, the drive, and the camping!

Driving down the Gulf affords lots of great camping, touring, and eating. We've mentioned just a few of many stops along the way. We didn't mention the well-known Sanibel Island with its great beaches, shelling, restaurants and bike trails. But Sanibel is not very motorhome friendly due to its narrow, congested roads and very limited RV parking spots. Still, it is worth a stop, if you want to accept the challenge. When we asked about getting a site at the one campground on the island, we were told people who get in once come back year after year, forever!