As we walked through the gates of Disney's California Adventure park, it suddenly hit me that we were standing in the old Disneyland parking lot.

As part of a strategic plan to duplicate the multiple amusement park concept the company pioneered at Walt Disney World in Florida, California Adventure opened in 2001 and while the first impressions were politely encouraging, attendance and reviews fell short of grand expectations.

Success took a little over a decade of introspection, redesign and a billion dollars, but there's no doubt that the current incarnation of California Adventure (re-dedicated in 2012) lives up to the quality of the Disney brand. As an alternative to it's venerable older sibling across the entrance plaza, California Adventure offers up a more satisfying adult experience while certainly delivering an equally engaging day for the younger set. 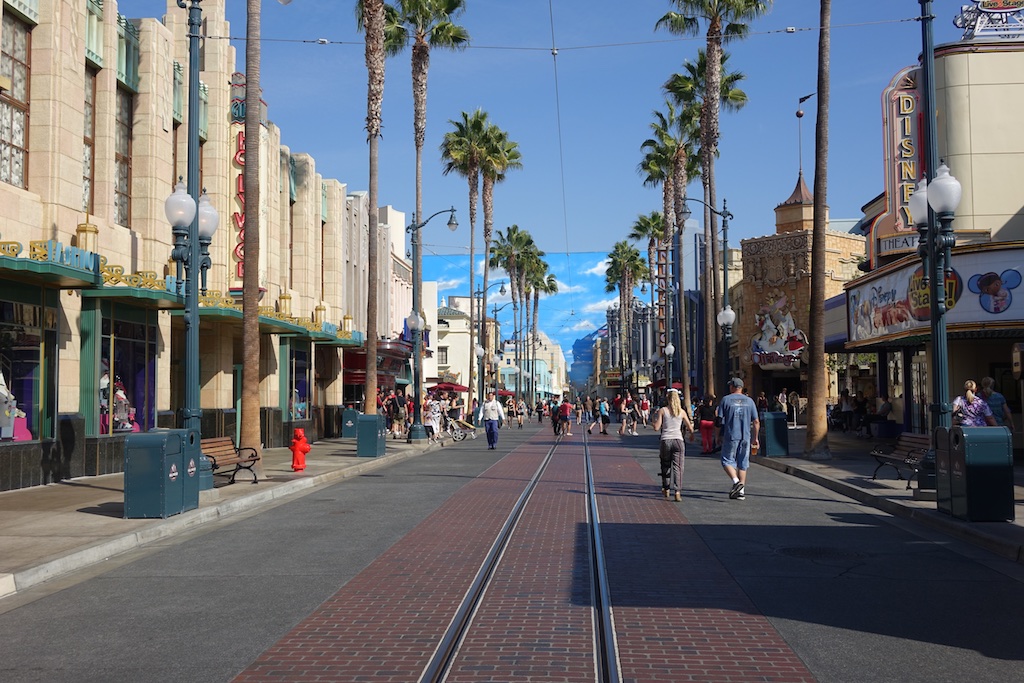 If it's your first visit to the park, it's best to plan for a FULL day instead of trying to dash through both Disneyland and California Adventure. The park is roughly laid out in a loop which you can work either in a clockwise or counterclockwise rotation. That's not to say a little ping-ponging back and forth won't happen, but we found the clockwise rotation to be a pretty good strategy. 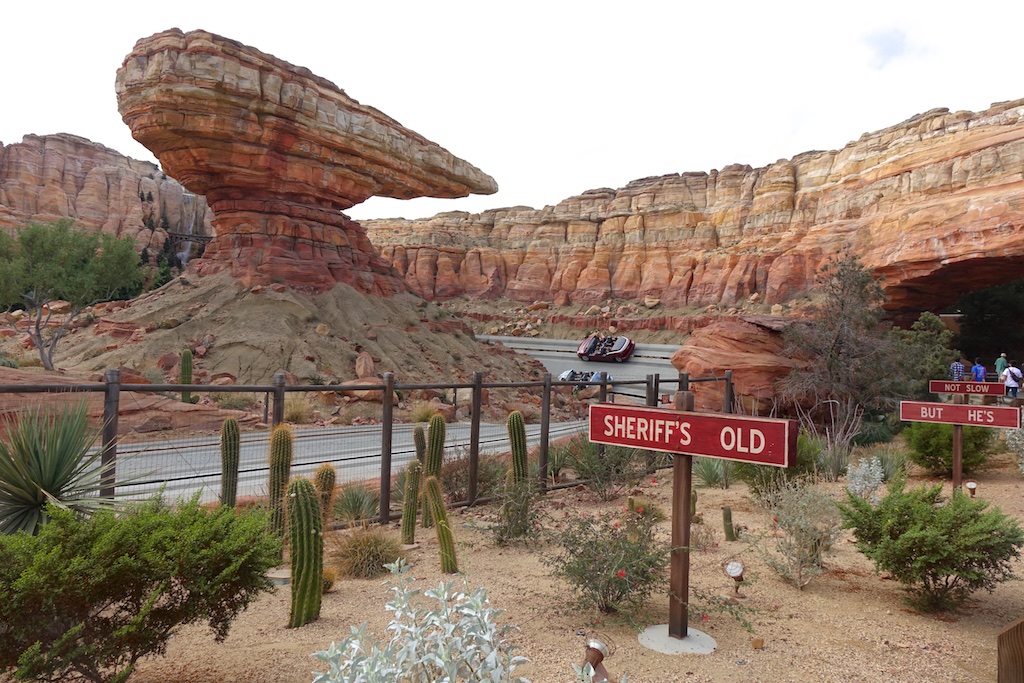 Cars Land with plenty of Route 66-ness brings the animated feature film to life with a centerpiece ride that takes you into a ride-along re-creation of the film (life imitating art?) and finishes with a high speed race through convincing sandstone canyons. 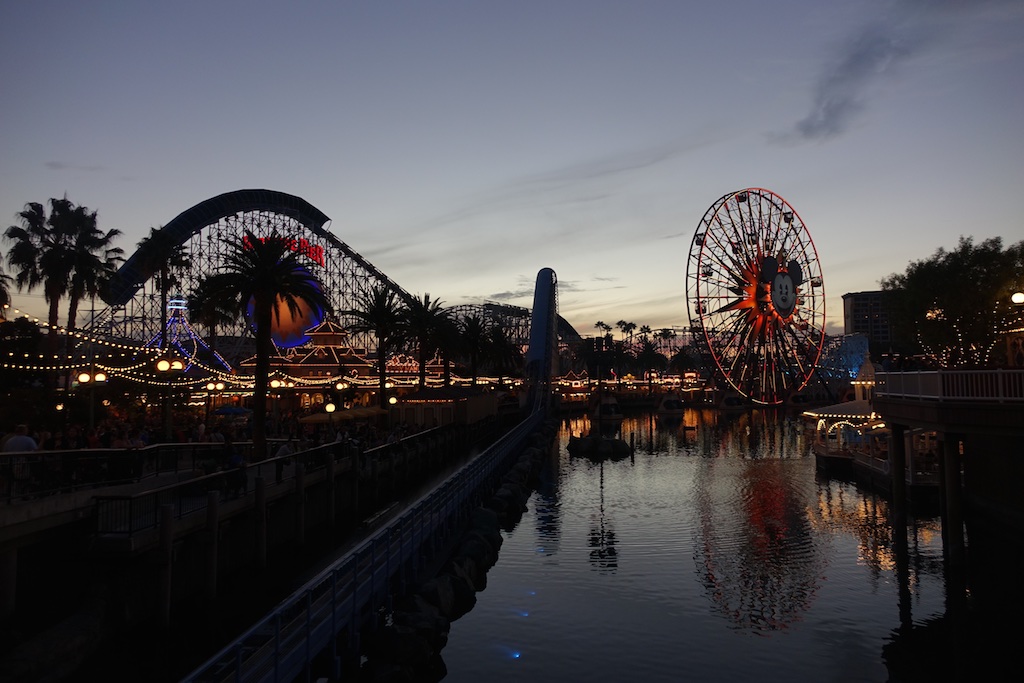 Paradise Pier is built around a large lagoon and the designers did a marvelous job of recreating an early twentieth century ambience. On the way you'll walk by old cannery buildings, boardwalk games of skill, and below a towering roller coaster that rockets overhead. The four minute roller coaster ride had its share of curves, and a complete 360 upside-down loop, but of all it's laugh inducing thrills the real shocker was at the very beginning where as the cars start their climb they're rapidly accelerated upwards. 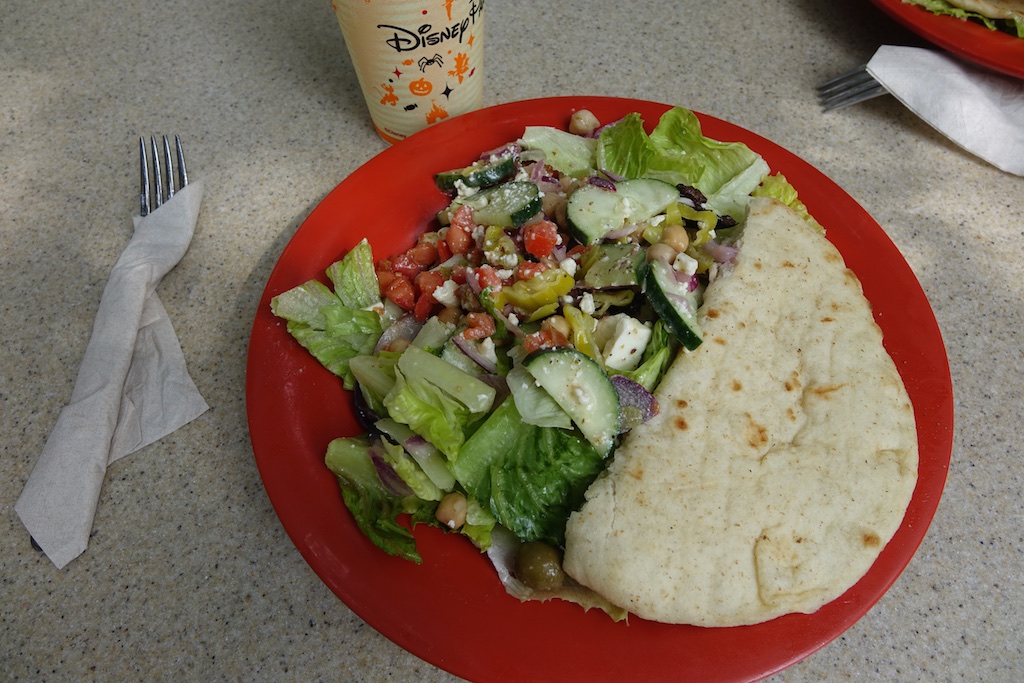 We were at the the far end of the park at Paradise Pier around lunchtime and appreciated Disney's continuing commitment to healthy food choices. We ordered tasty Greek salads and sat down just as a vintage jazz combo, "The Sons of Ellis Island" fired up. 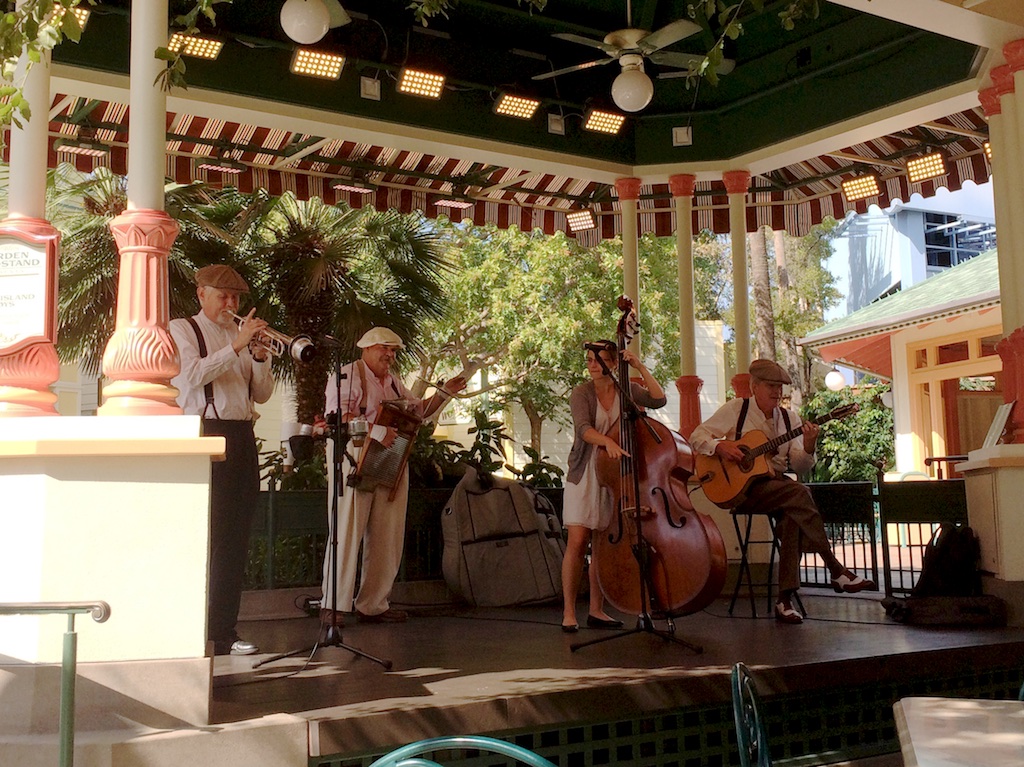 Amid the finely tuned design of a 21st century amusement park the Sons (and one "daughter") reminded me that even with all of Disney's state-of-the-art entertainment, pure joy could be as simple as sitting in the warm California sun tapping to the smiling beat of four great musicians.

In the Soarin' Over California theater we sat in gently swinging seats looking at an IMAX-like screen that created the equivalent feel of being in a hang glider sailing over California's grand landscapes. 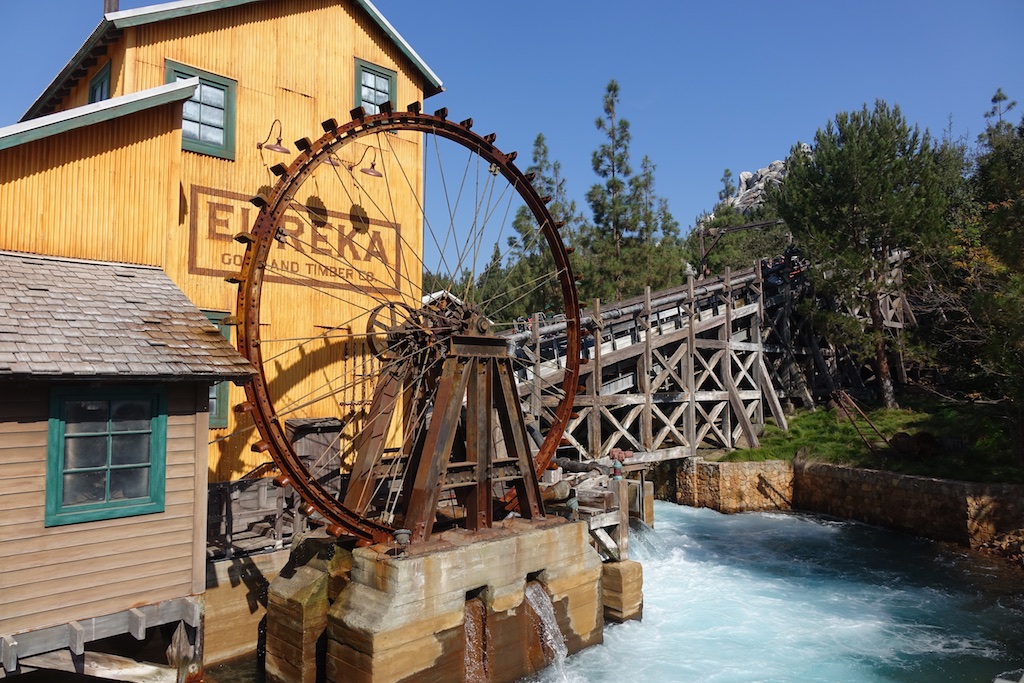 Nearby we got drenched riding the Grizzly River Run rapids ride. Take a raincoat, poncho or quick drying clothing and a waterproof camera (I wisely kept mine tucked deep away in my waterproof backpack).

Another big surprise was the Disney's "Aladdin: A Musical Spectacular" in the 2,000 seat Hyperion Theater in Hollywood Land. At just a little less than an hour in length it was a Broadway worthy spectacular with exuberant performances and highly inventive staging. The show shares a lot of it's creative DNA with the longer Broadway version. And clearly, many in the audience were repeat visitors as they seemed to respond on cue just like a midnight showing of the "Rocky Horror Picture Show." 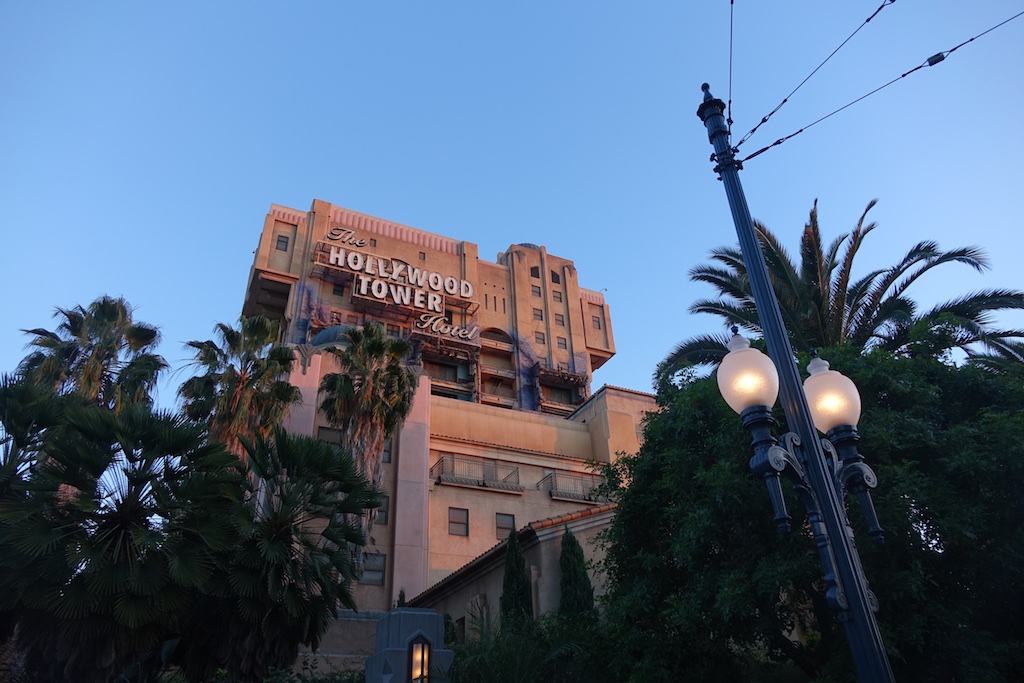 Right next door to the theater was the Twilight Zone Tower of Terror. Typical of many Disney rides, there's plenty to entertain you while you wait to get to the ride itself. And once you do, it's a pretty short trip -- and I'm not saying that in a bad way. The shock of of malfunctioning elevator is best kept to a minimum.

By late afternoon we were pretty satisfied with our complete circuit of the park and, as the sun headed off toward the Pacific, a new magic, painted in light, began to brighten the streets, shops and attractions. At the very beginning of our day we made a reservation at one of the park's high-end establishments, the Carthay Circle Restaurant. The restaurant is named after the Hollywood movie theater that premiered "Snow White and the Seven Dwarfs." The interior design is a 1930's wonder that has been fitted out in exquisite detail. Waiting to be escorted upstairs to the restaurant I observed that after people checked in and waited in the large lounge (we were thirty minutes early), hostesses would appear and magically know who you were. Of all the behind the scenes Disney "how do they do that?" wonderment, this remained the largest mystery of the day.

Dining in the Carthay Circle Restaurant is about as far removed from hot dogs and funnel cakes as you can get. The richly detailed appointments, including a Disney themed ceiling mural, relaxing glow of lighting, and well-honed service are definitely on par with many of the high quality restaurants we've eaten at across the country. And the quality of the cuisine? Remarkably good. We placed it right between a high-end hotel and boutique artisanal restaurant in both price and quality. 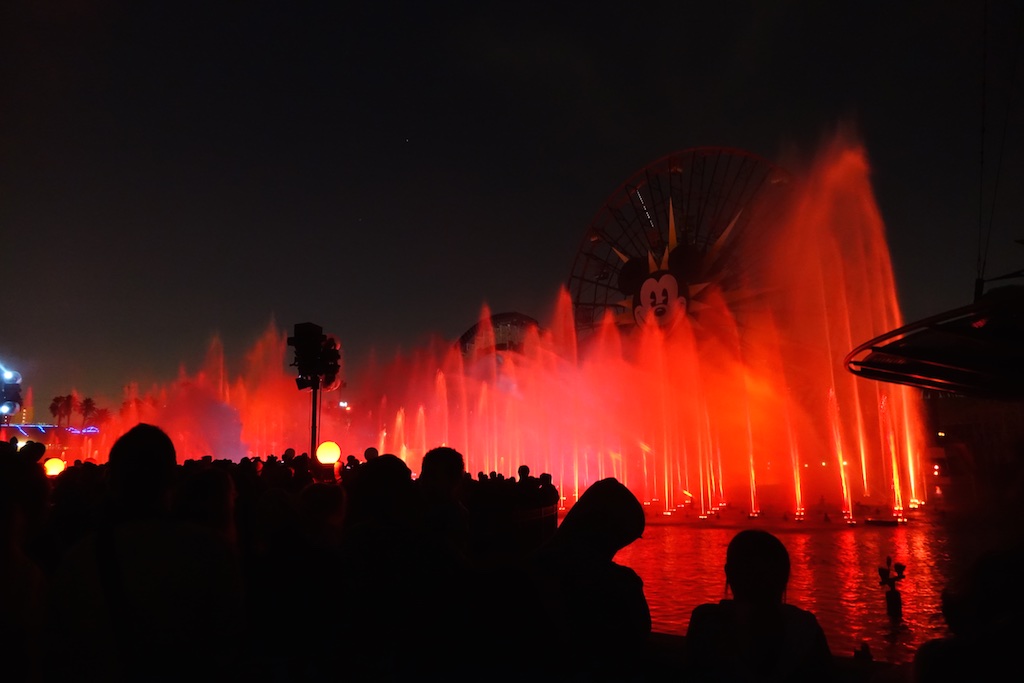 Had we made an earlier dinner reservation we would have liked to have lingered more in the restaurant, but to top off our are stuffed-at-the-seams day, we skipped coffee and desert and walked quickly back towards Paradise Pier to watch the "Wonderful World of Color" evening show. While across the way Disneyland finishes its evening with fireworks, California Adventure dazzles with an epically panoramic blend of fountains, lights, video projection on curtains of water jets, and a fidelity rich soundtrack that, after some of the other day's memories fade, will remain vivid for years to come. It's impressive, original, and totally Disney in all the best ways possible. 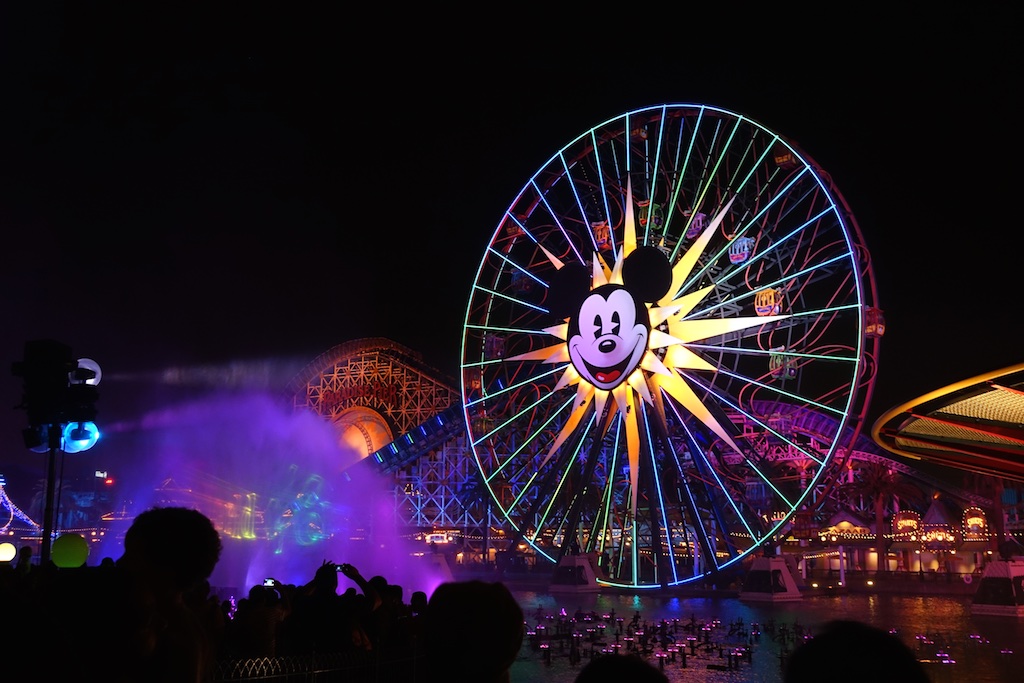 As the explosion of water fountain jets receded into the once again tranquil lagoon and the highly amped music softened to its regular, throughout the day, soundtrack, we followed the current of happy visitors out of the park and separated off to our quiet fifteen minute walk back to the Navion at the Anaheim Resort RV Park.

Each of Disney's two parks has its charms and, if your travel time allows, it's fun to experience both. For us, we really enjoyed the first-time exploration of California Adventure and the welcomed shift toward family entertainment with some rewarding adult grace notes. It certainly is an excellent way to use an old parking lot.

Visiting Disneyland and California Adventure with an RV is a very popular and convenient strategy. However, it's just gotten a little harder. Recently one of the RV parks with several hundred spaces nearby closed. Interestingly the property was purchased by Disney to be turned into an employee parking lot.

There are several parks nearby and we chose the closest, the Anaheim RV Park Resort. This is an older park with a variety of spaces for tents, trailers, and RVs. For its proximity it's pricing is slightly higher, but certainly fair. 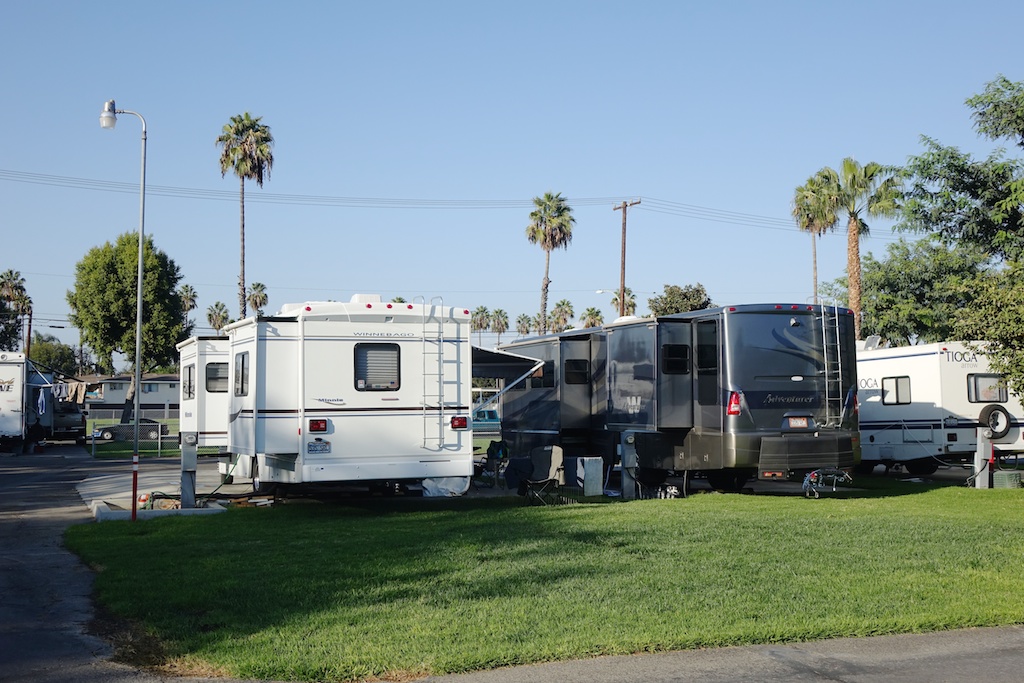 After spending three days here, we could see that a lot of care and effort goes into maintaining the property. All the sites are paved and the pool area was frequently tended to. The park has recently refurbished one building of bathrooms and all the other common facilities, even if older, were well tended to. 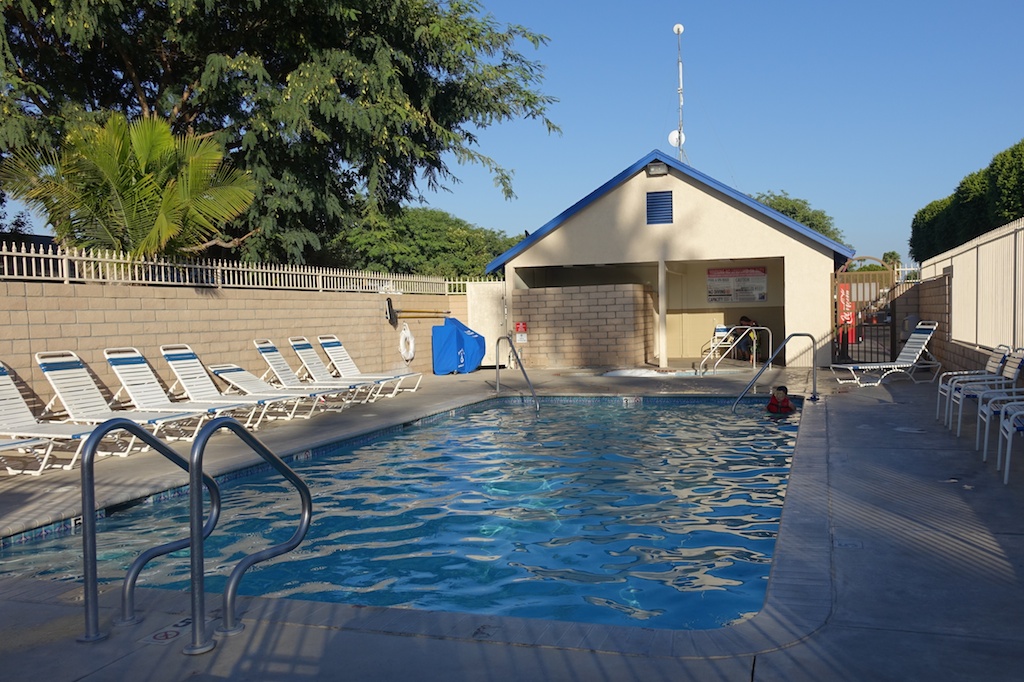 We enjoyed the friendliness of the front desk staff who explained to us that they had a full range of Disney friendly services such as a low-cost city-run shuttle that stopped in the park, car rental delivery to your site, and the all important pet walking service if you're at the Disney parks all day. 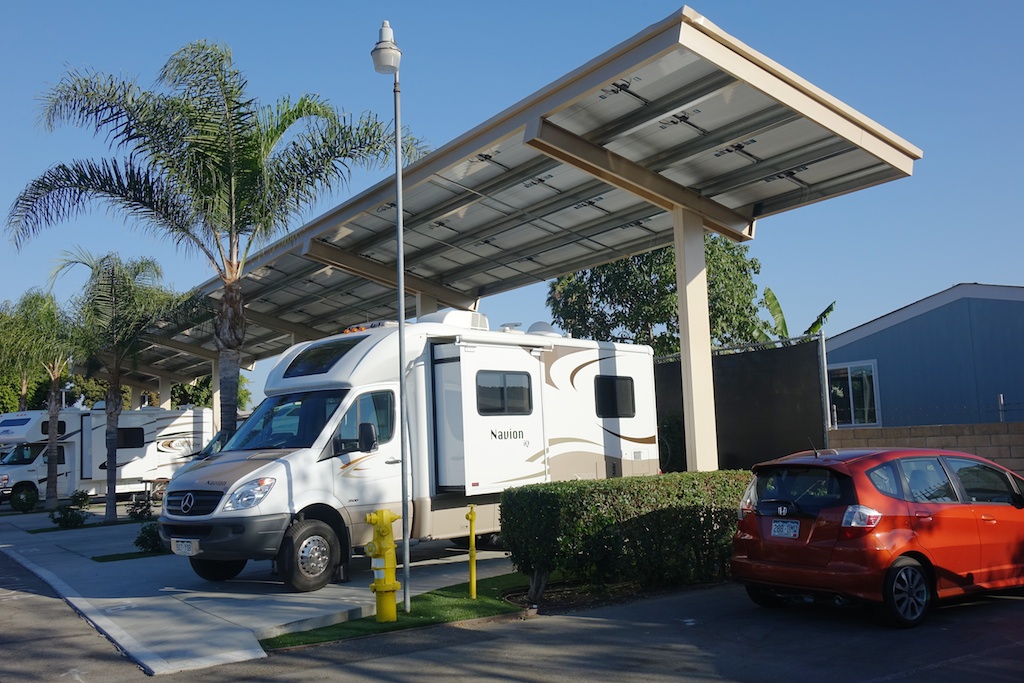 Sites offer basic cable and some, but not all are satellite friendly. Ours wasn't but we enjoyed the shade of a large solar panel system feeding the park's grid. Fortunately, HD over the air TV signals come in loud and clear. The park has TengoNet wifi, but we stuck to our speedy AT&T hotspot which gave us good LTE speeds.

What we really loved was that it was an easy and safe one mile walk to the park entrance. For us, the 20 minutes it took to walk back and forth was about as hassle free as it gets. There are also two grocery stores within a 5-10 minute walk if you don't have a car (or even if you do).

If there's a drawback, it would be the screened noise from the adjacent freeway. Remember, it's southern California, so freeway traffic is a 24/7 event. Nonetheless, with our windows closed and the A/C on it wasn't bothersome. For all of these reasons, the park, while not fancy, certainly deserves the good on-line reviews it's earned over the years.

(And now a brief legal moment. For this trip I had contacted Disney for press information. They graciously extended a one day pass for two guests. We spent our first day at California Adventure. I was free to write and photograph anything I wished without any corporate review.)