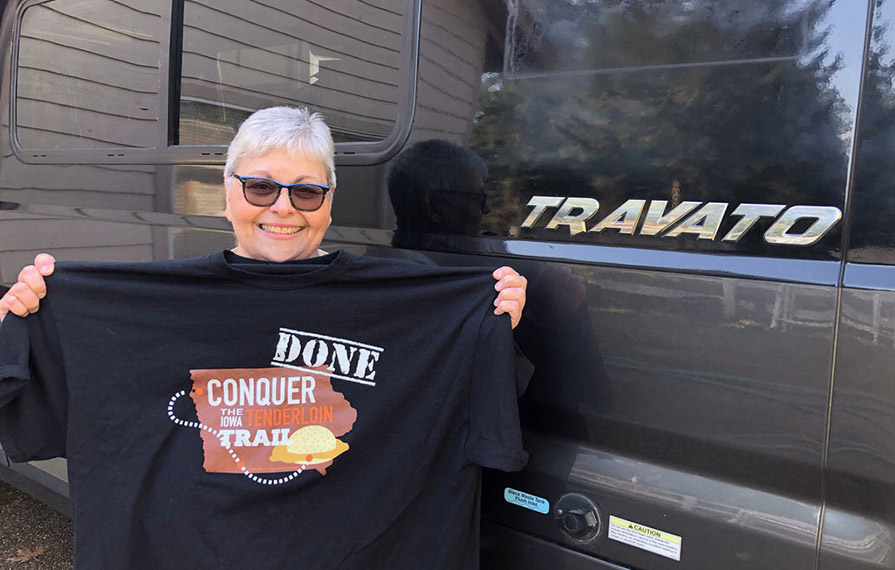 Last summer, I spent some time touring the Hawkeye State – something I have never done before and a road trip I now highly recommend.

Besides being the headquarters of Winnebago, Iowa is also the country’s top producer of pork. One of my goals while visiting was to take on the Iowa Pork Tenderloin Trail. This is a fun promotional challenge sponsored by the Iowa Pork Producers Association. Besides the good eats, traversing the state in pursuit of the challenge exposed me to many different parts of Iowa.

Most of the restaurants were small places in small towns. Every mile driven was worth it because of the interesting things I might otherwise have missed – like beautiful areas used as filming locations and unique historical sites.

If you're traveling through Iowa to visit the Winnebago Factory Service Center, attend Winnebago’s Grand National Rally, or for any other reason, this is a unique activity to incorporate into your plans to make the trip an even more memorable one!

An Introduction to the Iowa Pork Tenderloin Trail

To start the Iowa Pork Tenderloin Trail, you go to one of the fourteen restaurants listed on their promotional page and pick up a passport listing the names and addresses of the participating restaurants – all of which have won awards for their pork tenderloin sandwiches. Once you order a sandwich, you have the restaurant stamp your passport. When you have collected ten passport stamps, you send the completed passport to the Iowa Pork Producers Association and they will send you a commemorative t-shirt. I got mine! 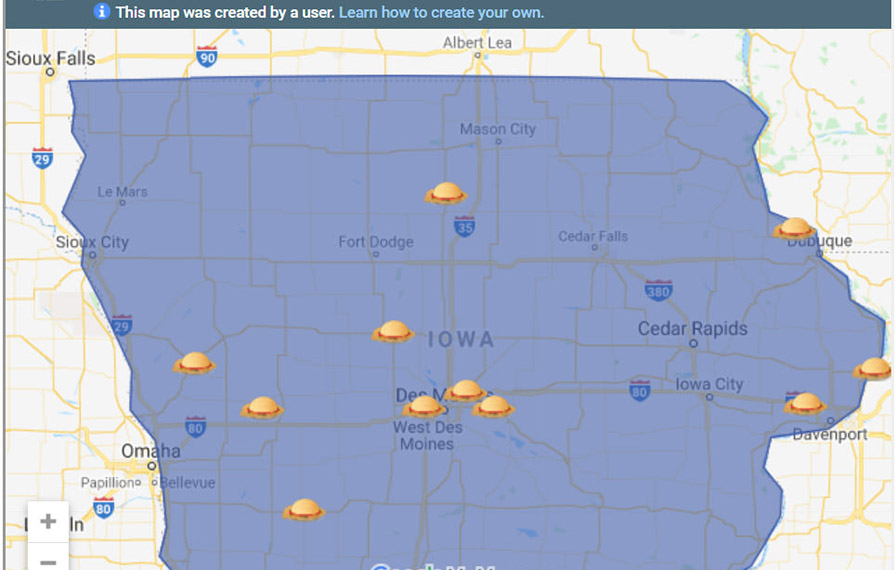 For those who may not know, pork tenderloin sandwiches are a THING in Iowa. Everyone has an opinion on how these deep-fried pieces of pork should be prepared: very thin or not so thin; a crispy crunchy breading or a thick batter coating. Some of the restaurants offer a grilled option. But grilling seems almost sacrilegious.

I ate ten of these sandwiches over a span of about three weeks, breaking it up with sightseeing and camping. Some of the restaurants were only open for breakfast and lunch. Some only on certain days of the week. Three of the places on the passport were permanently closed or closed due to COVID during my visit (in summer of 2020), leaving me with only eleven to choose from for the ten I needed. Scheduling the remaining ones as I crisscrossed Iowa was often tricky.

Then there’s the size of these things. Of the ten tenderloins I ate, most were way larger than the bun. My trick was to use the bun as a template, cutting away all the extra pork so that I had a normal-sized sandwich. I took the remaining pork to go. It was not unusual for me to get another meal or two from one sandwich.

Favorite Sandwiches & Stops Along the Way

I did have a loose itinerary for this journey, and it didn’t all have to do with pork. I was meeting a friend at a campground just over the border in Wisconsin for Labor Day Weekend and also wanted to see some attractions in-between visiting these restaurants.

My first pork tenderloin was at the Belmond Drive-In in Belmond, Iowa, just thirty-five minutes south of the Winnebago Visitor Center. If you blink as you pass through the town of Belmond, you will miss this small, squat building situated on a corner. Their dining room was closed due to COVID, but they were doing a great drive-thru business. I walked up to the take-out window and ate at a picnic table outside.

Not only was this my first sandwich, but it remained one of my favorites with its thin crispy texture and perfect seasoning. It was also where I had my very first fried cheese curds. Next time you’re at Winnebago, take a detour to the Belmond Drive-In and say hi to Joe and Jewel, the owners.

The same day I visited Belmond, I found myself at the Field of Dreams movie site in Dyersville. I really enjoyed visiting there since Field of Dreams is a favorite movie of mine. People come from all over to play catch and hit balls on the baseball diamond made for the movie.

From there I headed to Gramma’s Kitchen in Walcott for dinner, and my second pork tenderloin of the day. I did a lot of driving that day, mostly through post-card beautiful rural farmland. 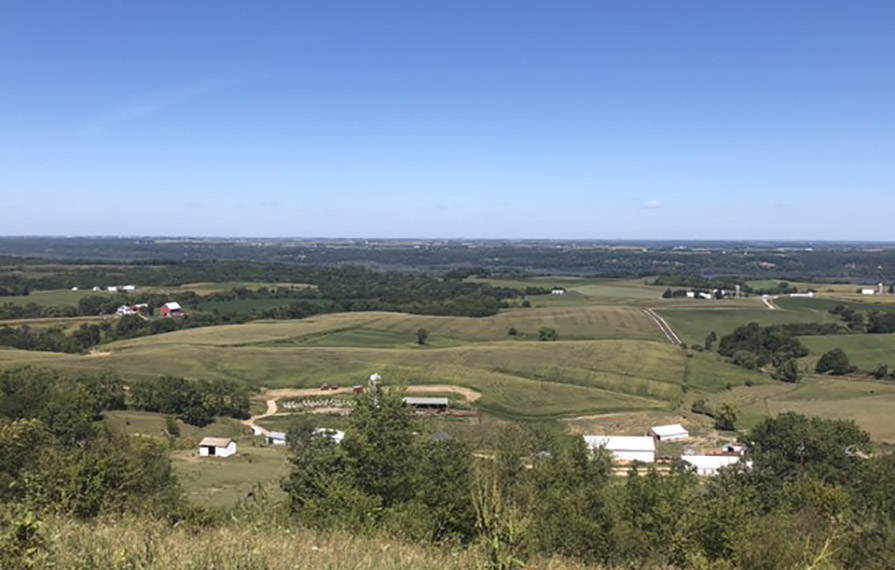 The sandwich at Gramma’s was the juiciest I had of the ten, but more importantly, the restaurant is right across the street from the World’s Largest Truck Stop, where I spent the night in my Winnebago Travato. There is even a Truck Museum at this gigantic truck stop. Every RVer should see this place.

Still making my way northeast toward Wisconsin, the next day I stopped at Stouts Irish Pub in Clinton and had another pork tenderloin sandwich. This was the largest of all I had, and I took enough pork back to my van for three more meals.

While in Clinton, I discovered the Sawmill Museum and stopped in to check it out. It is a very informative and entertaining museum about the sawmill and lumber industry in the area and has a lot of stuff for kids.

My next pork tenderloin sandwich was a few days later in Balltown, population of about 60, at Breitbach’s Country Dining. This restaurant was very much out of my way, but it turned out to be a gem.

Breitbach’s is a destination restaurant that is only open on weekends. You access Balltown via a gorgeous hilly drive with fabulous scenery. Opened in 1852, Breitbach’s is Iowa’s oldest restaurant. It has been in the Breitbach family since 1862. Supposedly, the outlaw Jesse James once dined here. 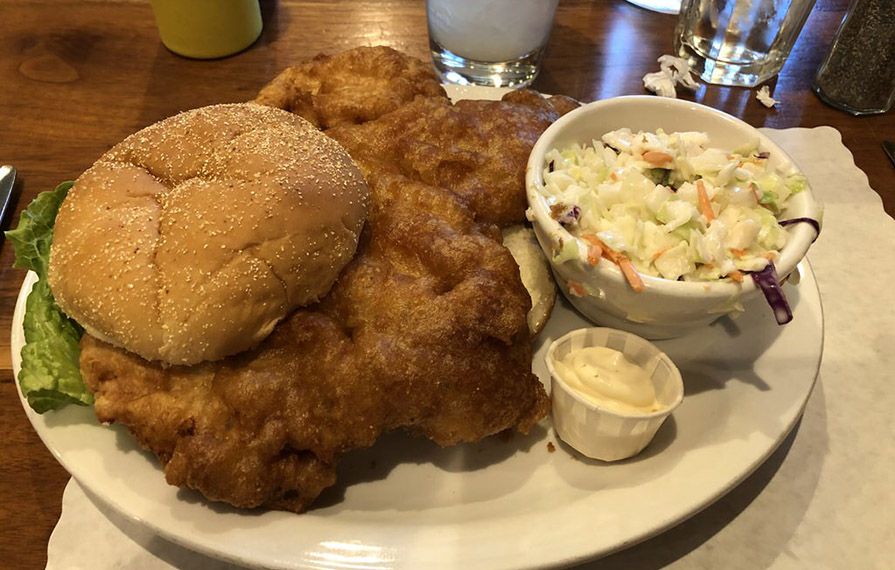 Their pork tenderloin sandwich quickly landed on my favorites list. Even though I prefer thin tenderloins with crunchy breading, the beer batter, light-as-air coating of this sandwich won me over, as did their coleslaw and pie.

I also had the pleasure of chatting with owners Mike and Cindy Breitbach while there. Cindy makes their incredible pies herself, hand-rolling them with a prized rolling pin that she does not allow anyone else to touch.

After spending a week camping in Wisconsin, I went back into Iowa to finish up the Pork Tenderloin Trail and to do some sightseeing in Cedar Rapids and Iowa City.

My next pork tenderloin was in Prairie City at Goldie’s Ice Cream, a tiny café. I ordered it through their walk-up window and dined at one of the picnic tables. This was another one of my favorites!

One of the other things on my Iowa bucket list was to visit the Bridges of Madison County; the covered bridges made famous by the book written by Robert James Waller and by the movie starring Clint Eastwood and Meryl Streep.

Here I have a confession to make. Although this was on my bucket list, I had no idea I was in Madison County until Tony, the charming owner of the La Vida Loca Winery, a Harvest Hosts location, mentioned it while we chatted on his porch. Time to change plans! 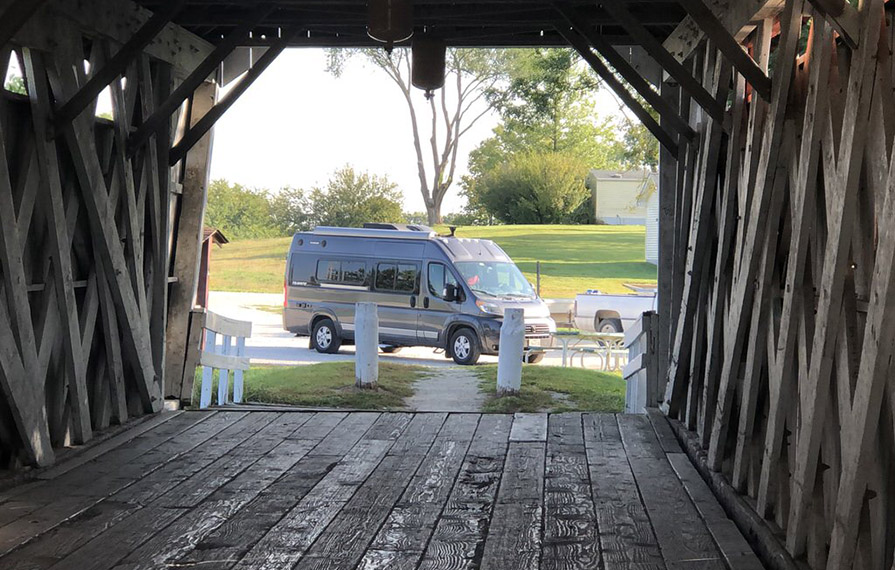 From inside the Imes Covered Bridge, the oldest of the remaining Bridges of Madison County, built in 1870.

Early the next morning, I visited all six of the bridges. It took me over three hours and I enjoyed each and every one of them. All but one are in the town of Winterset. To visit a couple, you have to drive down miles of dirt roads. Not a problem in my Travato, although my cat was not happy about it.

At one of the bridges, I ran into a couple of ladies who were doing the same thing. They were Iowa residents who had never seen the bridges until that day. We had a nice visit and they told me about several more things to see while in Iowa. The list of things I would have to see on my next trip was already growing!

The Cutler-Donahoe Bridge, built in 1870, was moved and is now a major feature of the Winterset City Park. If you visit it, take time to walk around this large, lovely park. Winterset was also the birthplace of John Wayne, and not far from this bridge is his birthplace and a museum.

The Three C’s in Corning & Other Small-Town Gems

From Winterset, I drove about forty minutes to the town of Corning and my next pork tenderloin at The Three C’s Diner. Their sandwich was excellent and definitely one of the better ones I’d had. As with many of these places, it was tiny and I ate outside at a picnic table. While there, I learned that Corning is also the birthplace of Johnny Carson, so I took a swing by his childhood home after eating.

One of my favorite things to do is to get off major highways and travel small roads. After Corning, I stumbled across the site of the first train robbery in the west, executed by Jesse James. Shortly after, I visited the small town of Stuart, the location of the First National Bank robbed by Bonnie and Clyde. A few miles later, I was in Dexter where the Barrow gang shot it out with the police in 1933. 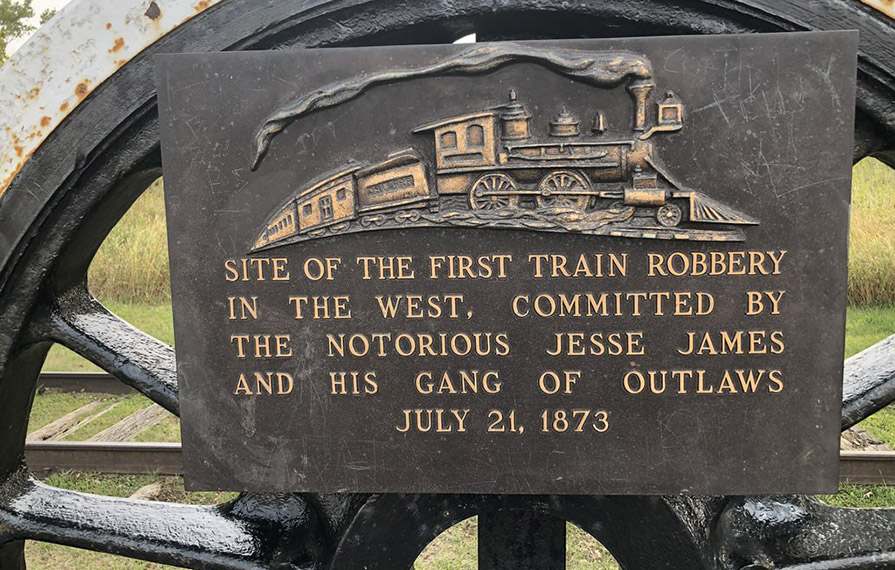 Finishing Up the Trail & Touring the ‘Danish Villages’

My next pork tenderloins were on the same day. The first was an early lunch at the Brick Street Market in Bondurant, just outside Des Moines. Another excellent sandwich and the perfect size. Dinner found me in Ogden at The Lucky Pig Pub and Grill. It was great, as was their coleslaw.

At this point, I had two pork tenderloin sandwiches left to make the ten I needed to conquer the challenge. The ninth one was in the small town of Dunlap at Dairy Sweet, a very popular local cafe. Their sandwich was good, but not one of my favorites.

The tenth sandwich proved to be a challenge all on its own. I was close to another restaurant on the list, Larson’s Pub in Elk Horn, so headed there, thinking I’d order the food to go and have it later for dinner. Problem was, the place was unexpectedly closed for the next five days. The last of the available restaurants on the list would entail quite a bit of backtracking. I was also a bit weary and wanted to take a few days off the road. The solution was the Cass County Fairgrounds in Atlantic. This turned out to be a great place to stay for several days!

I got back to Elk Horn a few days later to get my last pork tenderloin sandwich. Larson’s Pub was not open yet, so I did some sightseeing. Elk Horn and the neighboring town of Kimballton are together known as the “Danish Villages.” 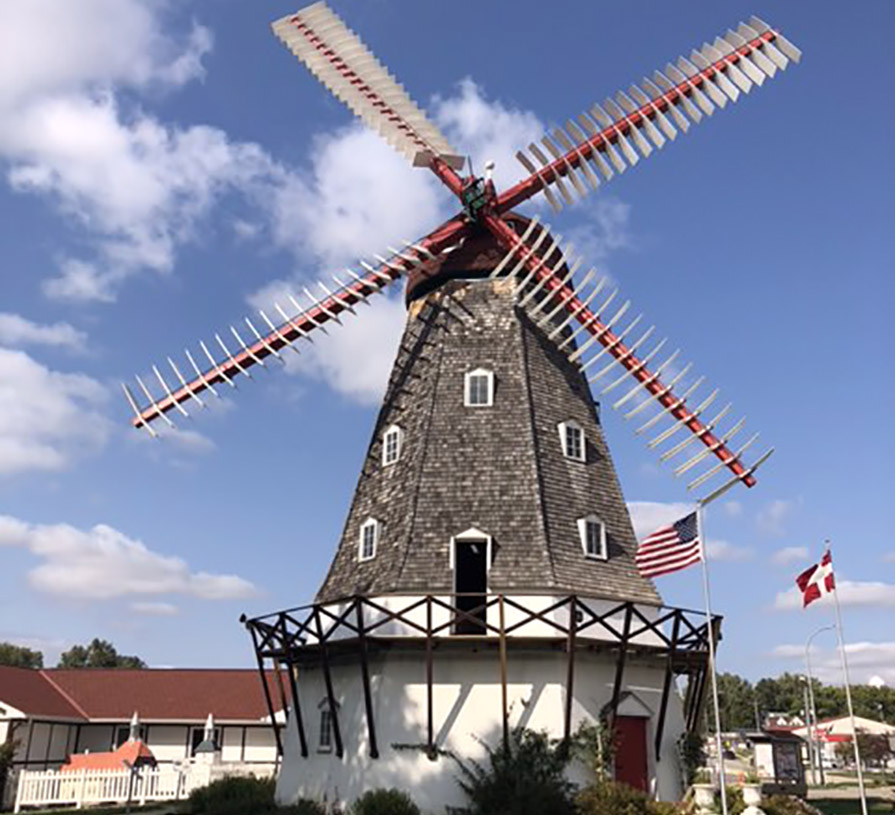 Kimballton has a charming park of sculptures centered around the stories of Hans Christian Andersen. Elk Horn has the oldest working windmill in the U.S., along with samples of Viking buildings and other Danish heritage information.

Larsen’s was only open for a few hours and only for takeout, which was ordered through a window facing the sidewalk. I took my food back to my van and ate it at a local park. The sandwich was good, but not one of my favorites. However, it was my last.

I had conquered the Iowa Pork Tenderloin Trail! But the real prize was seeing all the amazing things along the way and meeting some of the warmest people imaginable. That beats a t-shirt any day, even a cool one.

There are no comments yet. Be the first to leave a comment.