Top 10 Lessons Learned After Switching from DIY #VanLife to a Class B RV
Why a Winnebago van still offers the same level of adventure as a self-converted one, but with many more conveniences.
By: Mikah Meyer 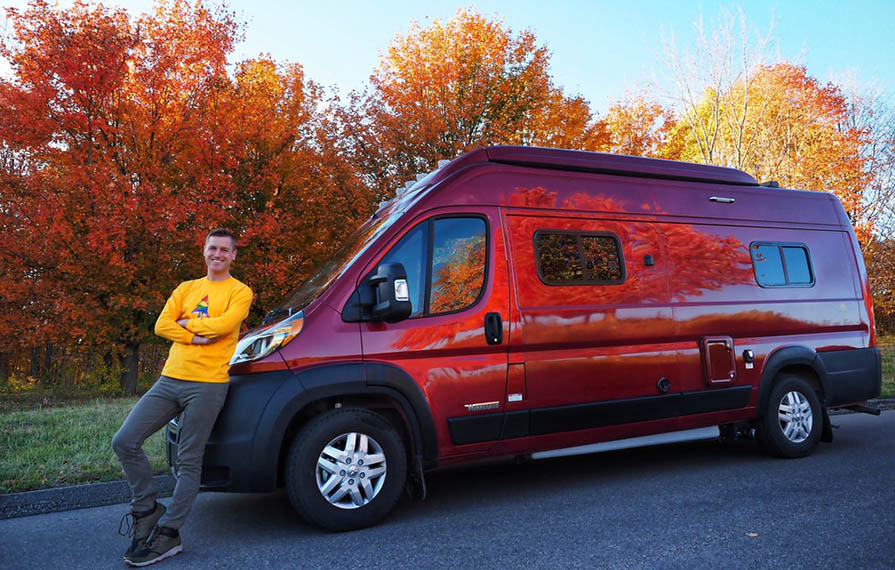 My first venture into road life came from age 30 to 33 when I visited all 419 National Park Service sites while living in a self-converted Ram Promaster 2500 Cargo Van. As I wrote about for WinnebagoLife in September, that van home basically consisted of a queen-sized bed, a fridge, and a water jug.

Now, I’ve just finished 40 days living in the brand-new Winnebago Solis while completing a 210-mile Run Across Minnesota, and learned a few things while running six miles a day and living in a professionally built RV for the first time. 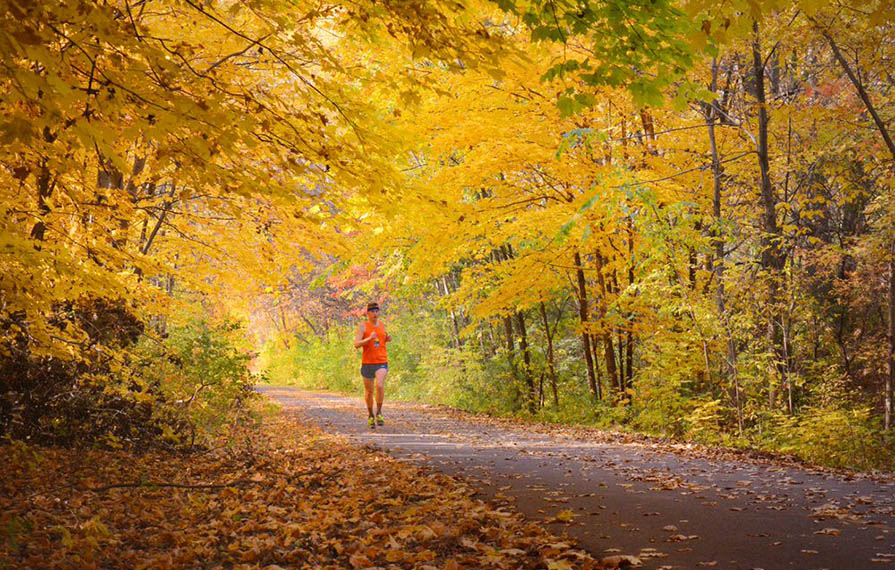 1. You Can Still Boondock

Having avoided paying campsite fees for the vast majority of my three years visiting the national parks, I was terrified an RV would be too conspicuous to boondock.

Any night I didn’t want to stay in a campground, I was perfectly fine. Everything from casino/Walmart/24-hour parking lots to city streets, without a knock on my windows or call to the cops.

And the Solis held enough water I could still shower and use the sink between hook-up spots. A huge improvement from my previous #VanLife experience. 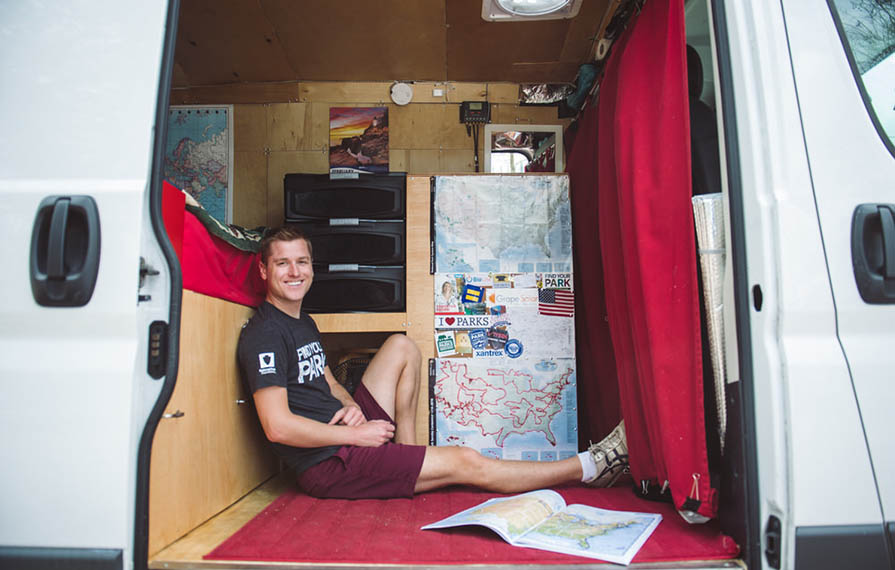 Inside my self-converted van, ‘Vanny McVanFace.’

The worst part of my self-converted van home was that if it was above 67-degrees Fahrenheit, it was impossible to sleep inside. The humidity was too oppressive even with fans pointed on me. So I’d sometimes alter my travel or book a hotel just to sleep.

Not in “Soren The Solis.”

During my Run Across Minnesota, temps ranged from 86 to 32, but I never had to worry if I could sleep, because no matter where I was, I had climate control. 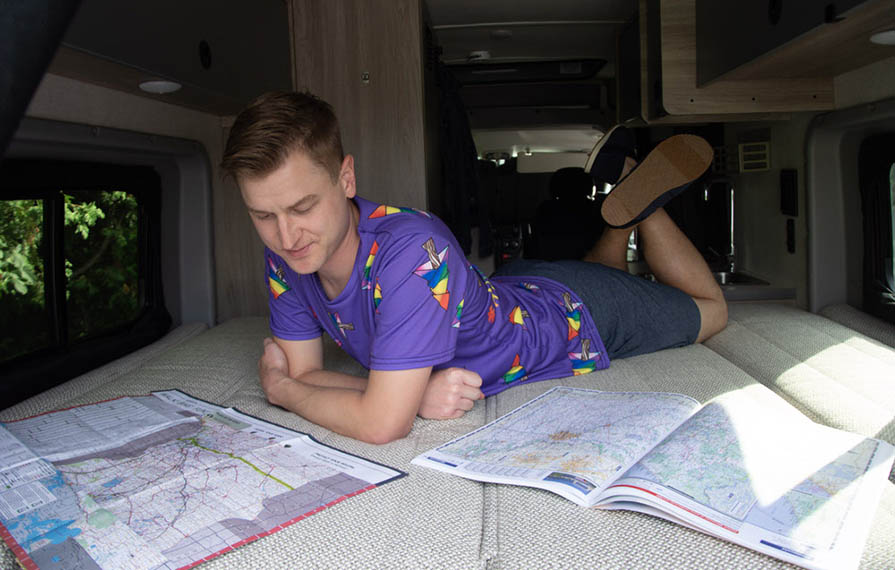 Even with the luxury of the above-mentioned climate control, the pop-up roof tent still provides the sensation of camping.

Because of the flexible side material and the zipper flaps that let in air and a view, it feels like you’re sleeping in a tent—just one that’s way easier to set up/take down, and safely elevated from animal attacks! 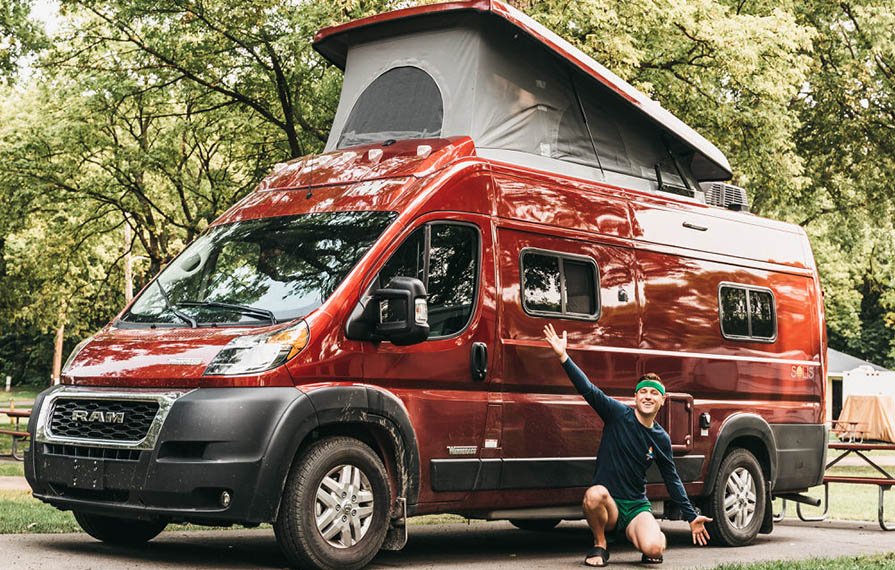 4. I Don’t Have to Go into Walmart to Wash My Retainer!

When I lived in a van, I’d often use a public bathroom to wash my expensive dental night guard under running water – a splash from a bottle just didn’t work as well. Plus, I wanted to save my water for drinking!

Now, having a sink in the Solis made waking up and being able to clean my retainer as well as start hydrating immediately, much easier than having to get dressed to go somewhere public.

The propane stovetop meant I also didn’t have to go without my regular morning tea!

Click here to see the steaming hot thermos I had LIVE on FOX Minneapolis’ morning show seven days into my Run.

In my self-converted van, I had just one power strip which all my electronics had to plug into.

In the Solis, there are five double-socket USB plugs all over the RV!

This meant I could charge everything from my phone to an iPad without having to turn on the generator (the USB plugs run off the solar and built-in battery).

These power plugs were enough for a small USB-powered fan to run, and provide a light breeze or white noise, overnight without the hum of the generator.

6. The Convenience of the Lights

My previous van home had a string of LED lights that circled the whole interior, and a portable BioLite BaseLantern that served as my two lighting options.

With both a main light in the Solis, and click-on options above the table, sink, both sides of the bed, and near the rooftop tent, I could stay up into the wee hours of the morning editing photos from that day’s run, and I wouldn’t wake up my Support Person with the brightness of the interior lights.

“Convenient” is the word I used most when using these lights for everything from improving the views of my food at dinner to needing to find an item just before bed. 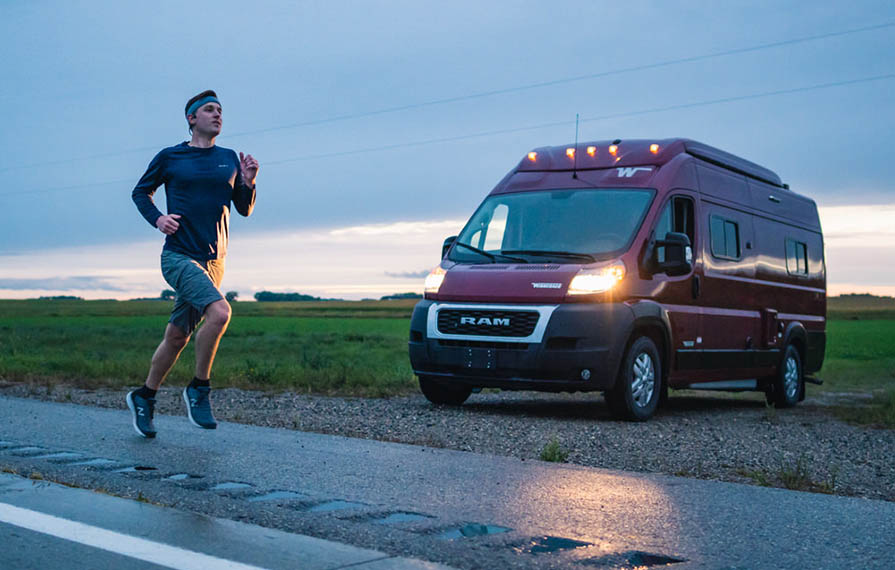 My previous #VanLife home had five standard house solar panels bolted to the roof. The remaining air space underneath kept me terrified of driving over 80 mph – in case the air pressure might rip them off my roof.

With the Solis’ flexible solar panel (that rests flush on top of the rooftop tent), I could drive as fast as I needed and never worry about my entire trip being ruined.

Speaking of worrying, during my run I was invited to share inspiring words from the road on NBC Minneapolis’ KARE11 “Monday Refresh.” Watch here.

As a male, I admit I have some unfair advantages to using the restroom while living on the road.

But because I had 11 different Support People helping with my Run Across Minnesota, some of whom were female, I felt so much better about their experience because they could have a convenient bathroom at all times, just like me.

The three built-in showers (one interior, two exterior) were also clutch when I was finishing daily runs in the middle of nowhere and wanted a warm shower to clean off the sweat. The Solis’ various heating modes (from ECO to BOOST) meant I could get hot water very quickly if I decided a shower was needed immediately.

And to witness the Final Mile of my 210-mile journey across Minnesota, ending on a beautiful fall day in a quintessential Minnesota river town, watch the 60-second summary: 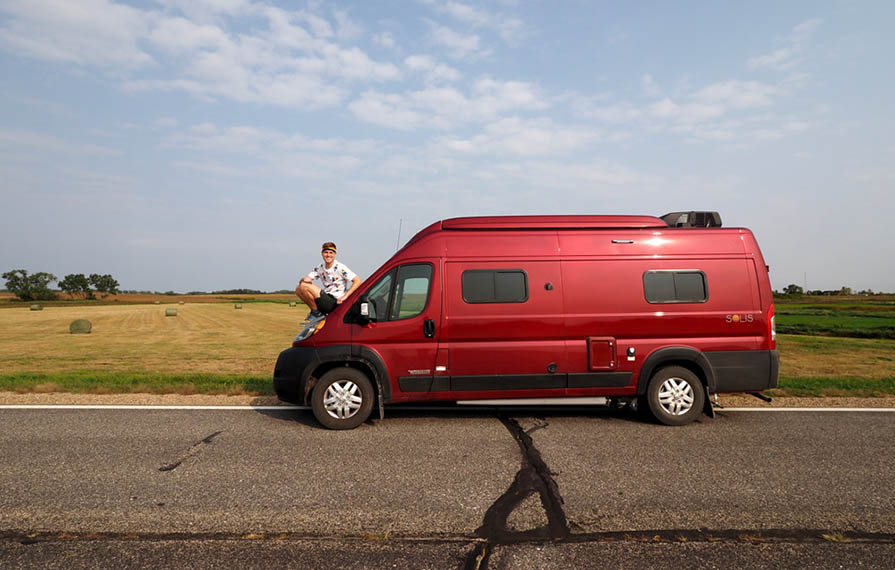 9. The Bucket Seats Are Amazing

“We can eat dinner together in here,” I said to one of my Support People, while they looked baffled.

“Just pull on the front right corner of the driver’s seat and it will turn around!”

My self-built van had a row seat, which meant I had to climb over it every time I wanted to access the living quarters.

Having two bucket seats that could spin around provided such easier access between the driver’s seat and living area, and also allowed for more comfortable seating if there were more than two people in the RV at once. 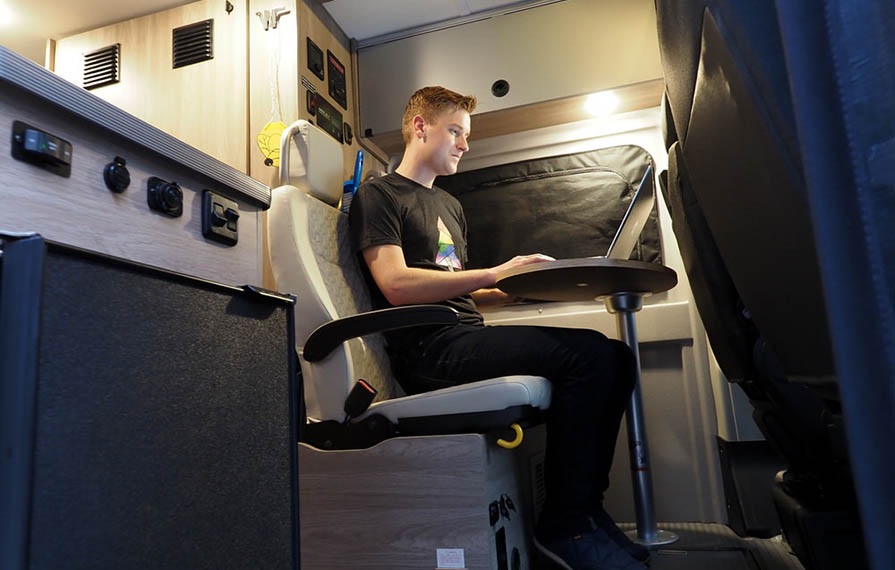 My previous van home had enough underbed storage to hold three years worth of clothes for every season.

Having cupboards and storage holes all over the Solis – with magnets that held the cupboard doors open when accessed – saved me so much time and hassle compared to trying to get “that one item I really need” buried deep within my van.

I also was carrying $10,000 worth of bikes that Schwinn generously provided to help my Support People speed ahead of me and capture pictures. The added 15 inches of length in the Solis 59PX version allowed me to sleep a lot easier knowing the bikes were inside, safely stored from both the elements and potential thieves. 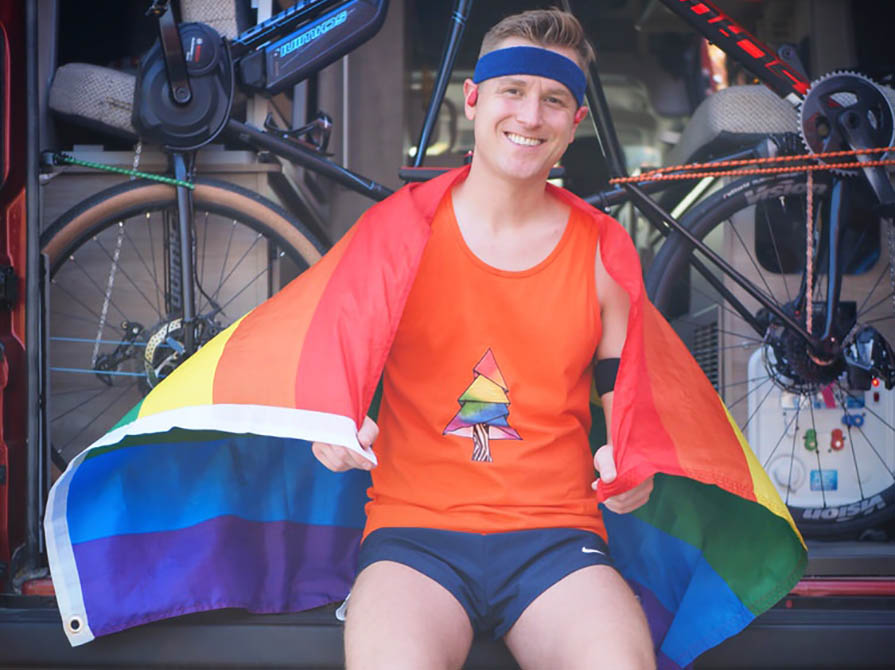 “We are still talking about your Solis!” commented a person I met in Montevideo, MN, 33 days after I based from the town of 5,383 people (I think each saw the RV during my few days there).

But it wasn’t just Montevideo.

Everywhere I drove, from my supply run in Brookings, SD, before the Run started, to the Costco parking lot in Minneapolis the night before I returned Soren back to Winnebago, I’d hear some version of “That’s a sexy RV!” from a passersby.

The most common descriptor used for my home on the road.

And they hadn’t even seen the inside… 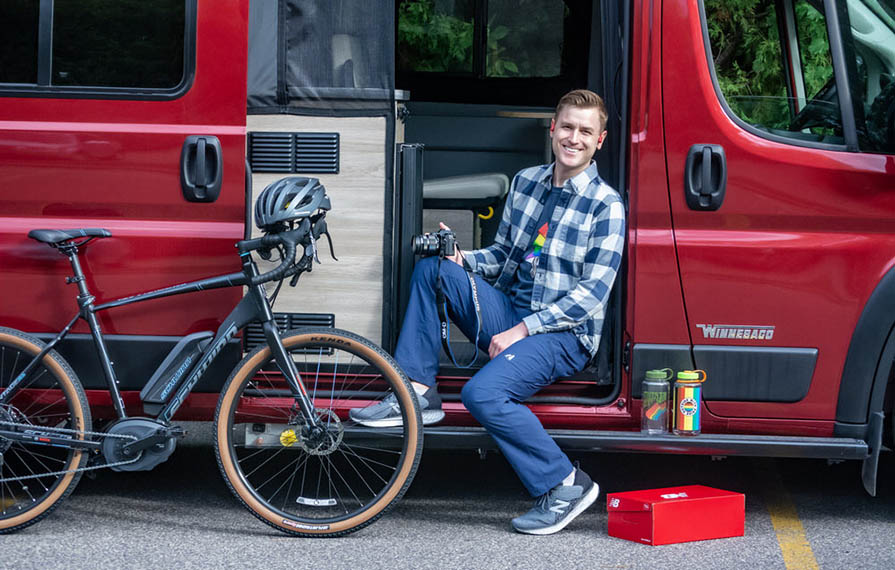 Overall, I couldn’t have completed my Run Across Minnesota during this pandemic without an RV, so I’m forever thankful it worked to test out a Winnebago Solis. Without Winnebago’s help, I wouldn’t have been able to use this Run to launch the Outside Safe Space: the multicolor tree you see in my photos which is designed to make the outdoors a more safe and welcoming place for all.

Learn more at: MikahMeyer.com/AdventurePride or in this PBS video coverage.

And to witness the Final Mile of my 210-mile journey across Minnesota, ending on a beautiful fall day in a quintessential Minnesota river town, watch the 60-second summary:

Plus, see all the best photos from the Run Across Minnesota on my Instagram @MikahMey 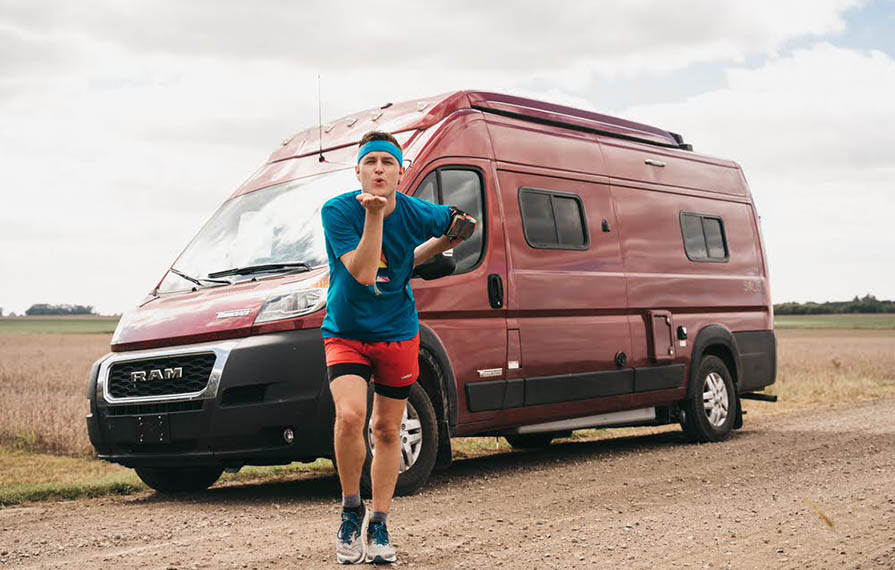