By early evening on Friday the last of the big rigs were rolled out of the Las Vegas Mirage hotel's event center. It was the end of nearly a year's worth of work and two and half days of meetings, presentations, and yes, a little socializing - Vegas style.

This was Winnebago's annual Dealer Days meetings where all the Winnebago dealers came to see the latest products being built for their showrooms and lots. In the long march out of the Great Recession, the past couple Dealer Days have featured some big announcements and splashy reveals as the company took on the gargantuan challenge of significant updates and adding new models to all their product lines. 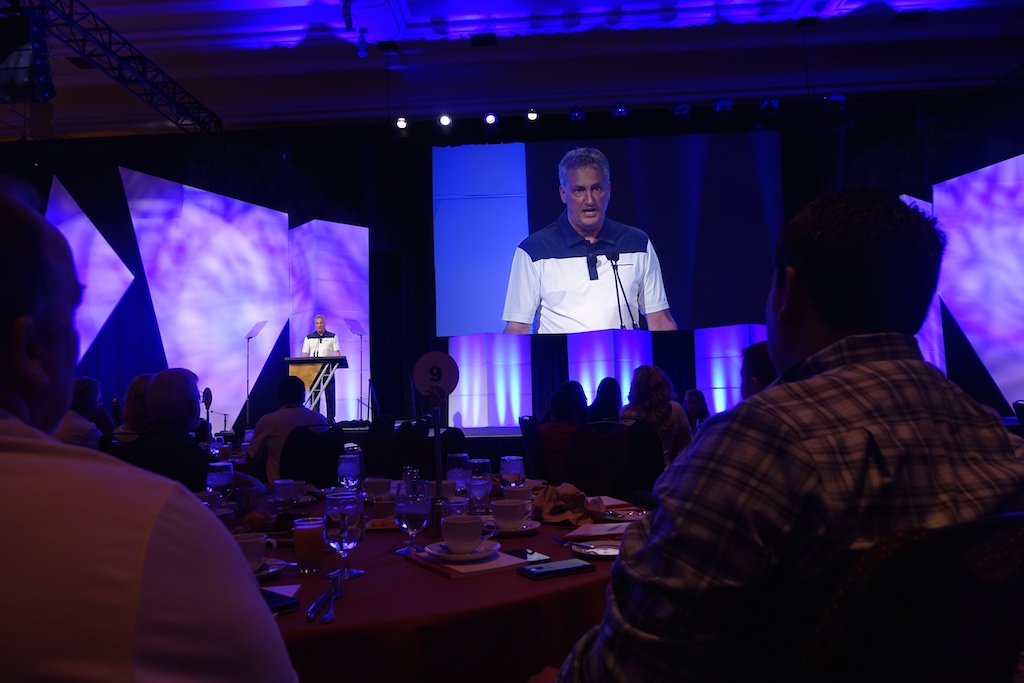 This year the company's announcements were more modest in scope, though certainly interesting. Business has been brisk for the company and it's dealers, and in an interview with RVBusiness, the company's CEO, Randy Potts, acknowledged that the demand for the company's products is so healthy that they announced the opening of a new manufacturing facility in Waverly, Iowa.

Potts also announced that the company was investing $20 million dollars in manufacturing and IT infrastructure improvements. These investments will yield benefits in higher quality, reduced cost, and improved productivity.

While this year's storyline didn't have a single blockbuster announcement, there were still plenty of new things to talk about, and to see.

The value leading Vista/Sunstar line added a nifty new floorplan (31BE) that, with the multi-adjustable bunk beds, can sleep seven in a compact 31' foot coach. Additional upgrades will also be available to the product line with options such as full-body paint. 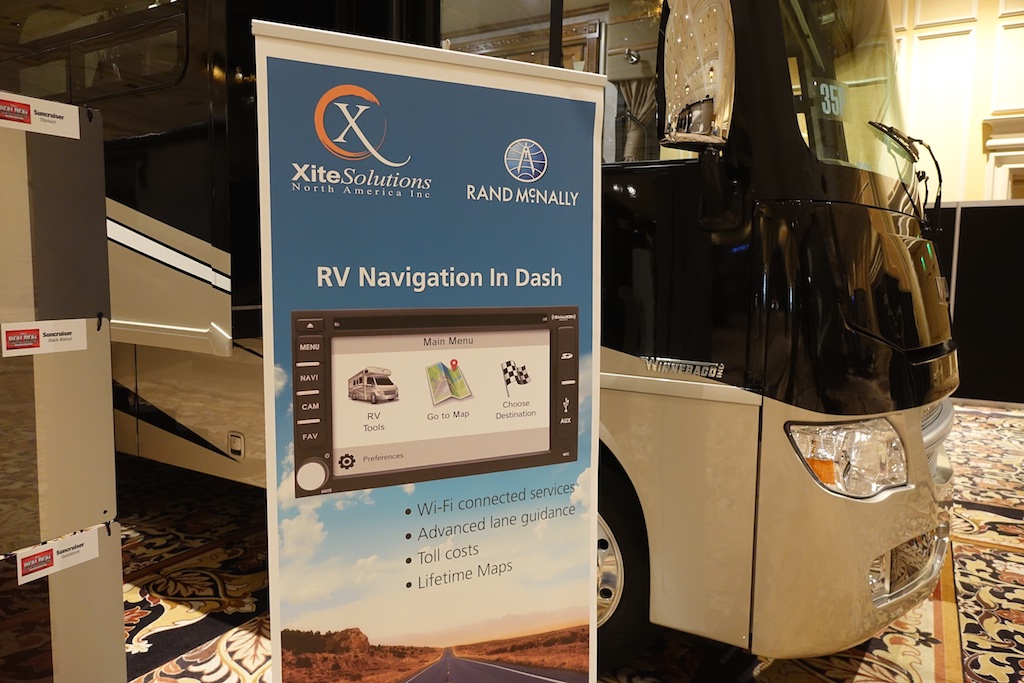 The top-of-the-line gas Class A motorhomes, Adventurer/Suncruiser saw a complete makeover starting with a distinctively contemporary exterior front end design. Inside, the Adventurer showcased a new upgrade to the Xite Infotainment system that features a massive 10.5" screen in the dash, but also a smaller screen in front of the passenger that completely mirrors the main screen for auxiliary control - you can even feed music or the GPS display to the living room flat screen.

In the diesel pusher lineup a new floorplan (38P) was introduced featuring a peninsula kitchen and two entry bath.

The big interior updates the Navion/View product line introduced last year have made a perennial red-hot seller turn white-hot. This year the company plans to show some similar interior love with refreshed interior designs for the Minnie Winnie/Spirit later in the year. 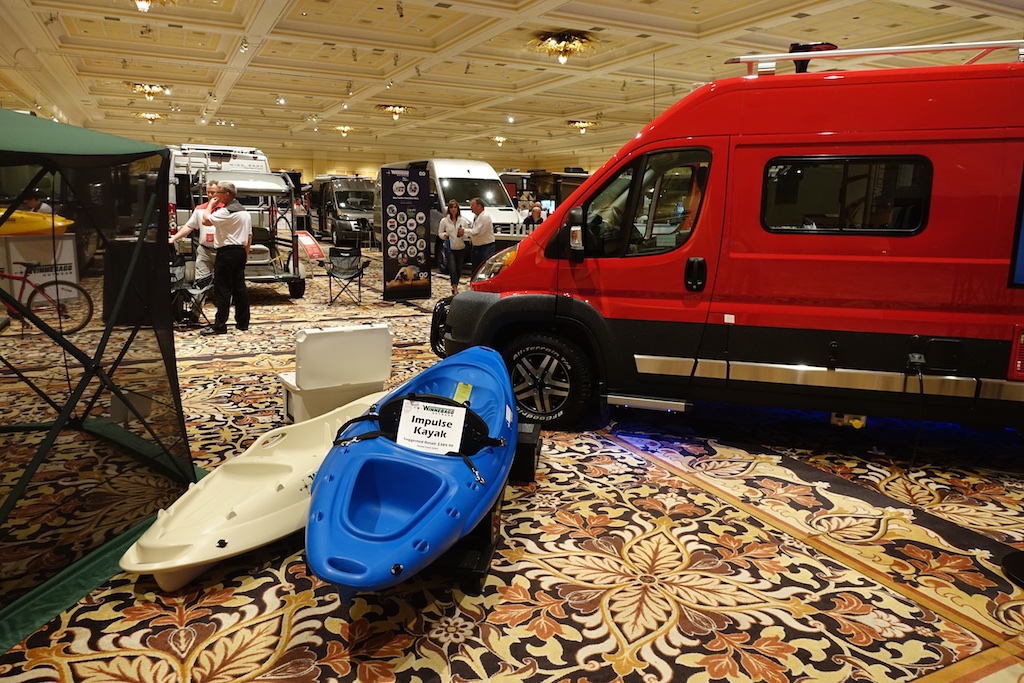 And speaking of red and white hot: those colors are exactly the way the two Travatos on the floor were painted. The original 59G floorplan was featured with a lower panel wrap of tough bed-liner vinyl and accented by a "Flying W" tire tread graphic along with high intensity fog lights and a cow-catcher bumper that screamed, "dare ya!" 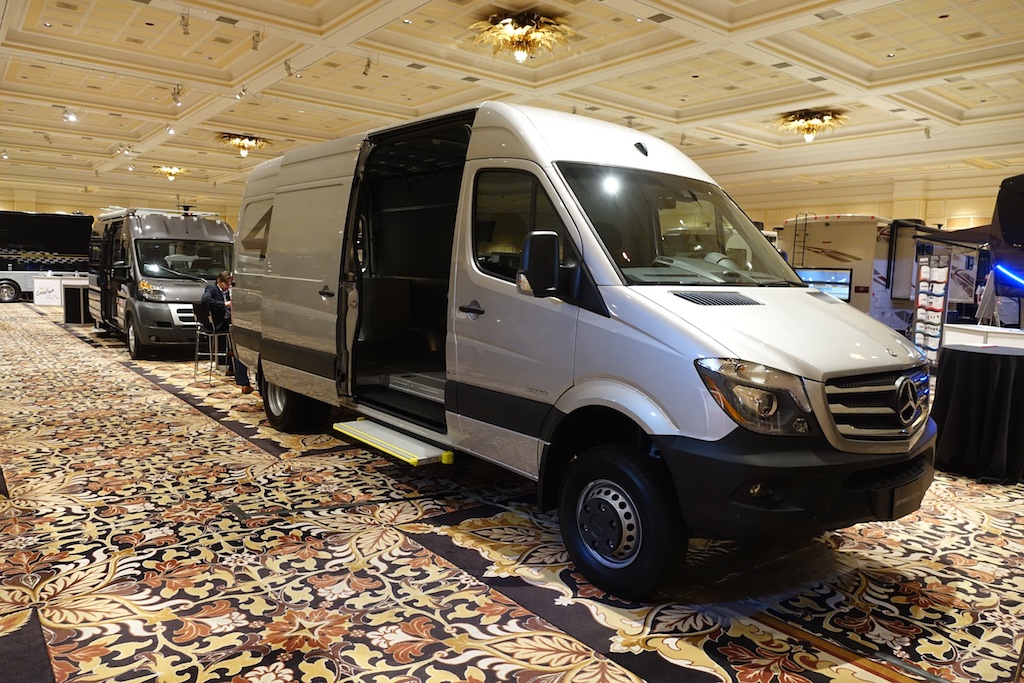 And with the hint of things to come the Mercedes team brought along one of the first all-wheel drive Sprinters in the US. This will ultimately lead to spotting Era's in places where you'd least expect to find them. 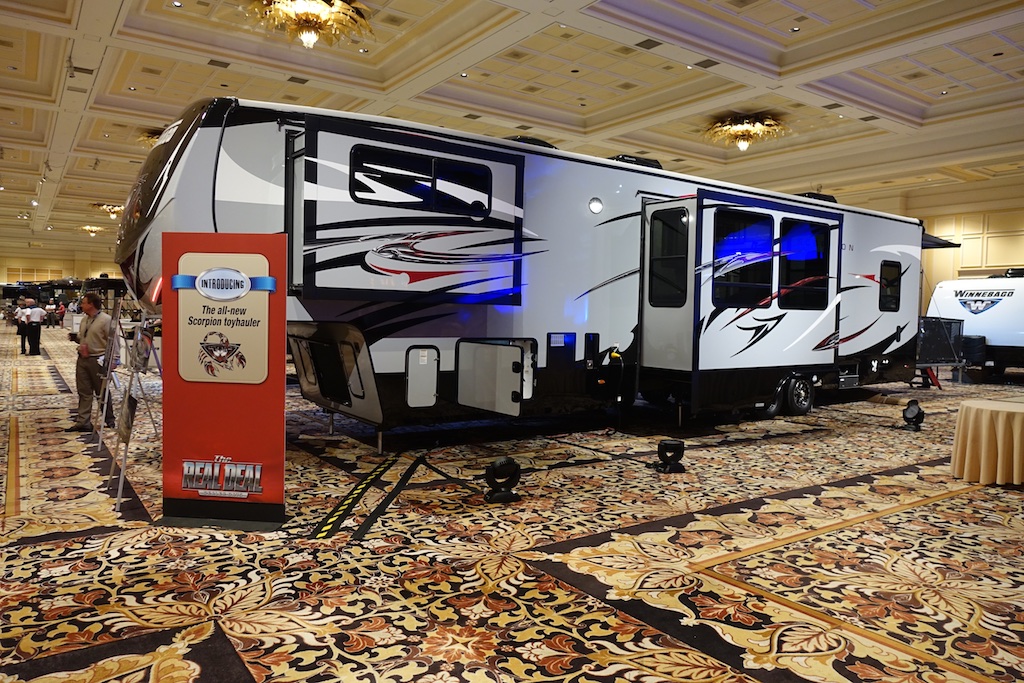 The BIG story with Winnebago Towables is the massive Scorpion toy hauler fifth-wheeler that'll glide down the highway on three axles. It's a mobile man-cave that can just as easily be enjoyed by mom and the kids. The Scorpion gets your attention right away with the liberal use of red LED accent lighting. And like, all Winnebago towables, the cabinets, furniture and build quality remains the quality leader in its class. 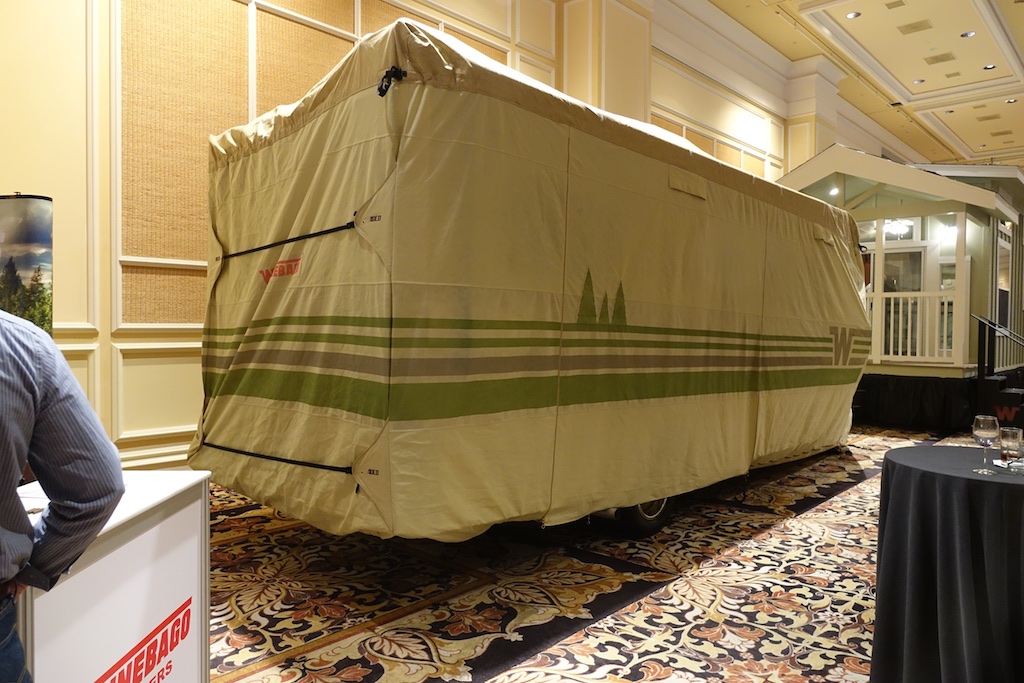 There were two other products introduced with the Winnebago name. The first is a new line of outdoor covers being produced by the best in the business: ADCO. ADCO has been manufacturing RV covers for sixty years and will soon be offering a collection of Winnebago signature covers. 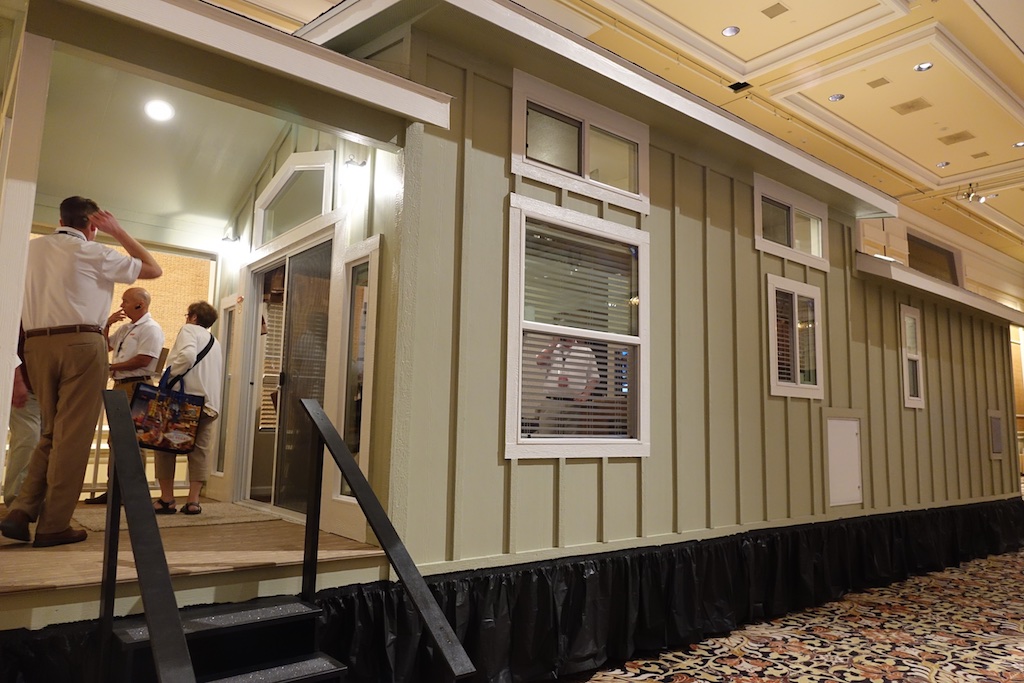 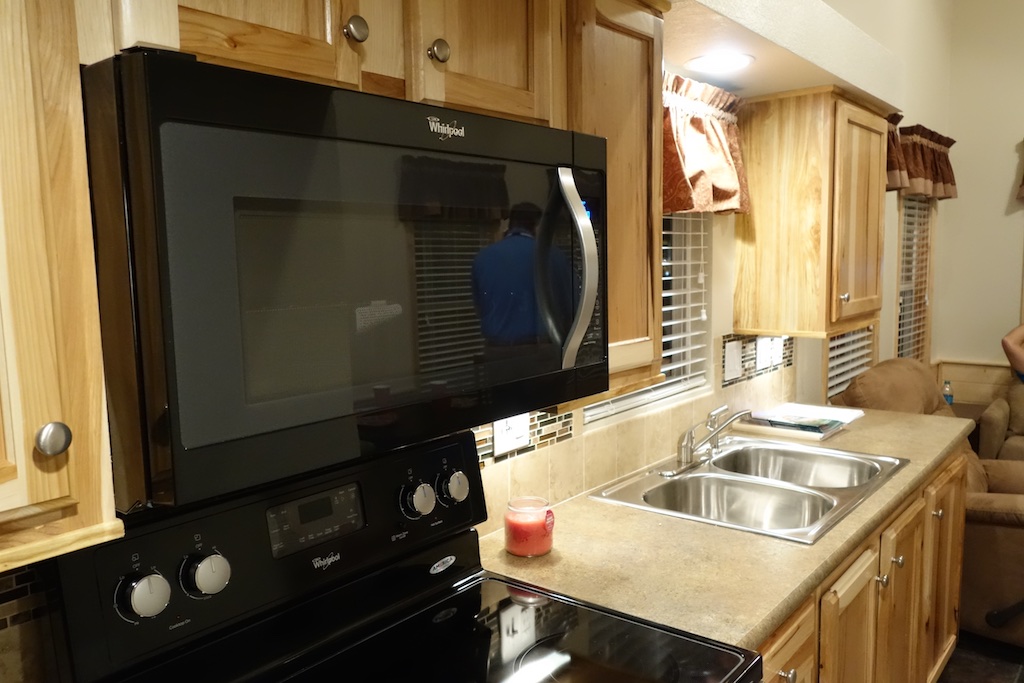 Champion, the second largest manufacturer of park model units, managed to barely slip under the Mirage Event center's high doors two Winnebago park models with designs and upgrades that will be unique to the Winnebago label.

Finally, the company brought some real magic to the evening's traditional dealer awards dinner with the appearance of magician Mike Super. Summer television viewers last summer saw Mike reach the final round in America's Got Talent. From the middle of the audience, to the stage in front, Super startled, amused, and totally mystified the audience who rose to their feet in a rousing standing ovation. Winnebago's Marketing and Sales Promotion Manager can now add "levitation" to her list of career skills as seen in this video.