Kelli Harms looked at her closet contemplating a seven-day trip to Las Vegas. Jeans for work. Comfortable shoes for the day. Something dressy for the company dinner. Except for phone calls, texts and e-mails home, her job as a mother and wife would be suspended for a week of work that was the culmination of months of meticulous planning for Winnebago's Dealer Days.

As the Marketing and Sales Promotion Manager for Winnebago, Kelli was part of a small team who was tasked with the critical assignment of showcasing the company's 2015 product line to over 300 of their North American dealers.

In an interview with an RV trade publication, Winnebago CEO Randy Potts, talked about how the company has roared back from the recession and is now "doing more with less." And when you look at the incredible logistics and complexity it takes to put on Dealer Days and realize that this ballet of American commerce is choreographed by a small handful of talented and passionate staff, you can't help to be impressed with their creativity and dedication.

Whether you love or loathe the action and glitz of Las Vegas, there's no denying that it's a first-rate location for corporate events. This year the company chose The Mirage Hotel for Dealer Days. The Mirage has a conference and event center with a grand ballroom that is so large it comfortably held the company's entire line of motorized and towable products, with additional room for a large stage and banquet tables for 400. 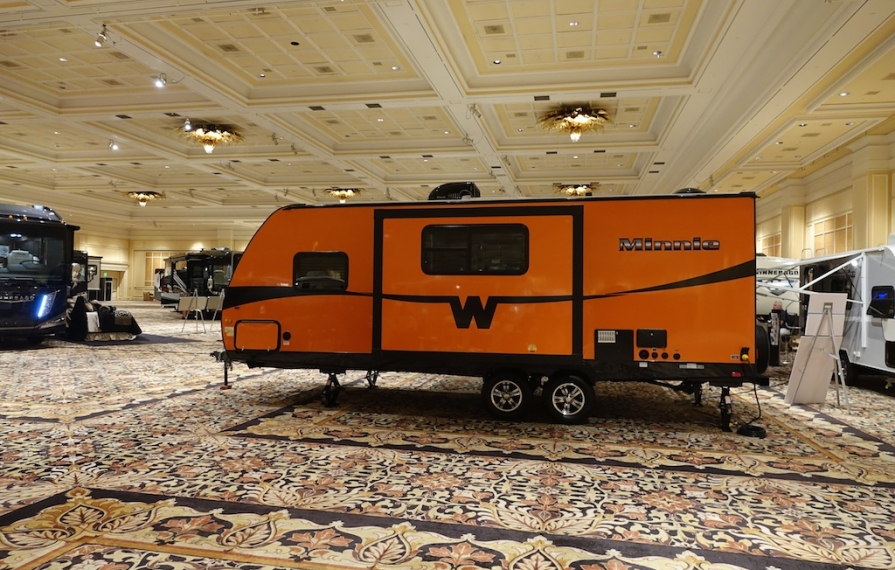 One of the big logistical challenges was driving, towing and shipping products to Las Vegas and then, two days before the show, rolling everything inside onto the carpeted floor of the ballroom. Under the direction of Winnebago staff and long-trusted contractors, teams positioned the motorhomes, and towables, cleaned the interiors, polished the exteriors, and placed steps and displays all around.

Concurrent to getting the products ready a lighting grid was hoisted to the ceiling, a stage built in the front, and a production platform erected in the rear for audio, video and the show directors. Video projectors, computer controlled lighting, video cameras, teleprompter, and microphones were wired up and tested.

Prior to arriving in Las Vegas the Winnebago marketing team worked through lists and lists of items from company shirts to note pads, to meal planning and entertainment. The routine ten-hour days leading up to the event in Forest City, now became twelve to fourteen-hour days on-site. Most of the Winnebago team would spend their entire time in the hotel with maybe one evening free to step out onto the strip. Forget the glamor and excitement of travel. This is hard; intense work that is critical to keeping assembly lines moving and competitors on their toes.

The event would kick off with an evening welcome, open bar, hors d' oeuvres and an open house of all the products except for three big rectangles draped in black cloth. Earlier in the day, as an army of people hustled to get all the exhibits and products in place, Harms sat at a table in front of the stage with the event's producer watching and listening as each executive and product manager rehearsed his presentation. Occasionally a presenter would stop, and a short discussion on final wording and message tweaking would ensue. If it were necessary, the script would be rewritten and any of the supporting visuals adjusted. 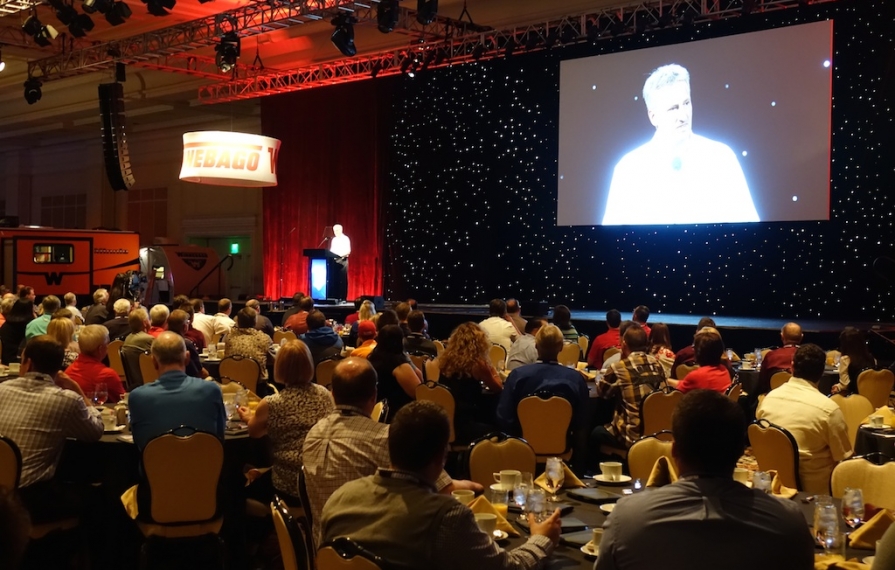 When the doors to the event center swung open Monday evening to welcome the dealers, there was a phalanx of Winnebago ambassadors to meet them. The conversation was lively, and the growing sound pitch quickly faded with the lights, smoke, and on the stage appearance through theatrical fog of emcee Jim Cunningham who strode onto the stage as Captain James T. Kirk. Of course, this was all tied to a launch video of a Winnebago strapped to the back of a Saturn 5 and the meeting theme, "Out of This World."

As far as corporate sales events go, Dealer Days walks a fine line between excitement and excess. Though there's plenty of sizzle, it sits atop a midwestern sensibility that keeps a hawk-eyed focus on relationships and products.

This year there were two big announcements: A Grand Tour and Ellipse Ultra and the reintroduction of a classic design in the form of a new Brave and Tribute. In addition, there were new floor plan introductions of Winnebago Towables and refreshed interiors and accessories throughout the motorhome line. 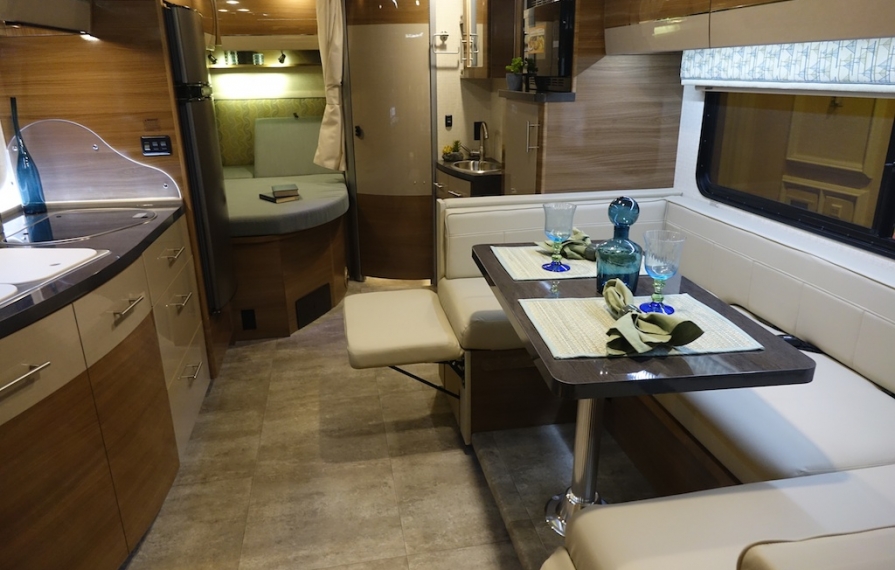 Next to the barely year old Ram Promaster Travato and Viva/Trend sat the company's wildly popular Sprinter products, the Navion and View. The new 2015 24J floor plan is one of the most traditional layouts in the industry and one of the company's most popular. However, with some creative rearranging, the company designers have pulled off the ultimate magic act of providing a surprising sense of a larger coach in the same compact dimensions. And part of that magic is the new high-gloss Italian cabinetry and LED lighting that led many dealers to praise its European inspired design.

The Grand Tour is an evolutionary product that moves the company's top of the line coach a lot closer to the ultra-premium market. While the mechanical aspects of the Grand Tour are the same as the current version, there is a noticeable step up in luxury appointments, finishes, and automation. What struck many visitors who toured the coach was how close in features and finishes it was to products costing twice as much. 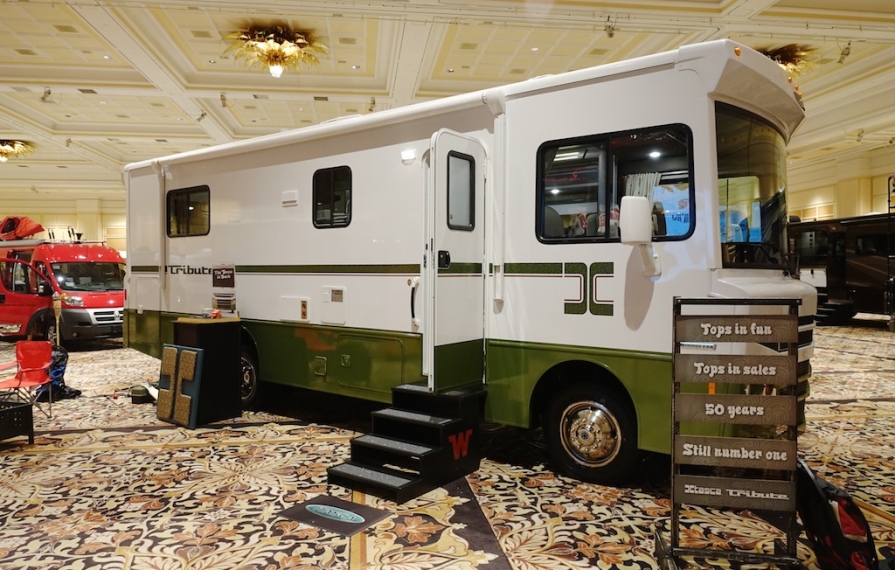 When the black shrouds covering the Brave and Tribute were pulled off along with the sound system pumping "The Age of Aquarius" the applause and hoots were spontaneous and enthusiastic. By returning to the classic design of the early Winnebagos, the company has made a bold bet that differentiation counts. Today, as you head down a freeway at 65 it's next to impossible to tell the make and model of motorhomes passing in the other direction. Not so with the new Brave and Tribute. With their signature brow, notched back, and candy bright colors you'll know instantly they're a Winnebago. 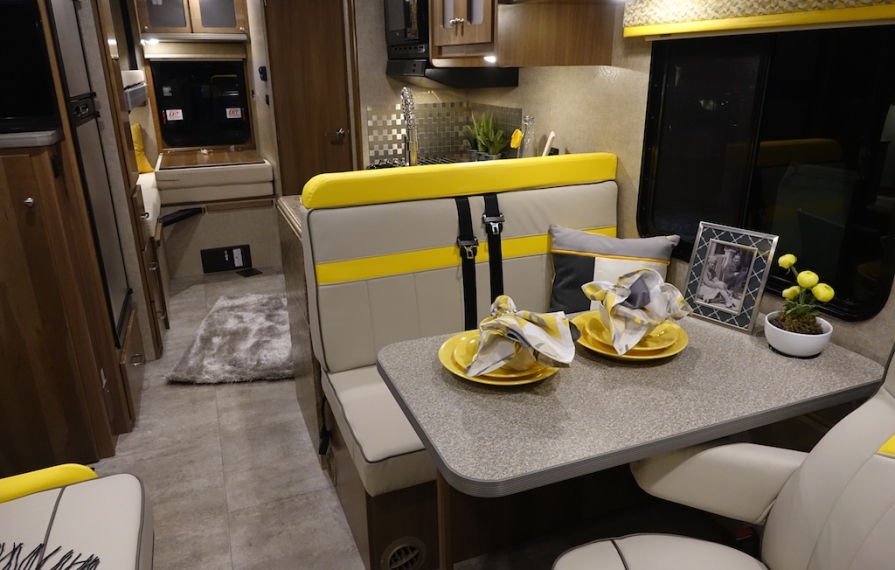 Clearly the inspiration for the Brave and Tribute's exterior design permeated the interior. The bright upholstery accents, etched glass sliding cabinet doors, and ribbed brushed aluminum trim brings a nostalgic smile to older eyes, but at the same time you know this is a place where Lululemon, Patagonia, and iPad equipped families will want to travel.

By noon on Wednesday, it was all over. In Kelli Harm's full week in Vegas, Dealer Days was a 2 1/2 day interlude. The next morning she'd be up early for a 7 o'clock morning flight home. It was 84 degrees out at the hotel pool surrounded by sun lizards and the faint churning of daiquiri blenders. She looked at her watch and the stack of boxes yet to be packed and shipped home and knew that her one window of free time had closed. That evening, she sat around a dinner table at the hotel with the company's marketing team celebrating success, critiquing the event, and setting the plan in motion for next year's Dealer Days. The conversation focused on making next year even better, just like the Winnebago assembly lines where continual improvement has become a daily mission.