The View that Drove to Russia

That "fill in the states" map many RVers decorate their rigs with seems much too limited to place on Bob Tait and Maureen Kelly's 2006 Winnebago View. This lively couple with a wickedly ambitious sense of adventure has 130,000 miles on their lovingly named "Bothan Taistil." It's Gaelic which translates into "cottage for travel."

Between sips of a late afternoon coffee fortified with a touch of whiskey, Bob is outside his suburban Pittsburgh home, sitting in his treasured Bothan Taistil, reflecting on world travels and contemplating the fine art of coach modifications. He laughs, "I want to be the person to put the most miles on a View when I die." It sounds like an attainable goal given the couple's energy and travel ambitions.

Second acts in life often provide unexpected twists, and it was at an outdoor function where Bob was serving up food that he met Maureen. "I'm surprised my cooking didn't kill her right to begin with," Bob chuckles. "I was divorced and she was widowed. She was with another guy and as we said goodbye I told her date that if he ever wanted to give her up, that I wanted to be the first in line."

Maureen was an early childhood reading specialist for years, and Bob had risen through the ranks to become the VP of an international company that specialized in design and certification of consumer packaging equipment. Their interests in hiking, biking, enjoying the outdoors, and traveling were a perfect match.

Bob had never owned an RV before, but it was actually Maureen who put them on the road to adventure. In 2002 Maureen discovered the Mercedes Sprinter. She bought one and started making modifications to it for camping. From the Jersey shore to the kidney bouncing washboard road to Chaco Canyon in New Mexico, Maureen and Bob launched into retirement at a speed faster than a rural Texas interstate. The Sprinter was tasked with safely conveying them to Alaska as part of a three-month road trip. And it was in Anchorage where they first set eyes on a Winnebago View. They almost bought it then and there, but waited until they returned home to get one from a local dealer.

With Bothan Taistil now an integral part of the family, a Cape Cod wedding was planned followed by an international three country driving honeymoon into Canada, through the US, and down to the bottom of the Copper Canyon in Mexico. But, apparently simply spanning the breadth of North America was not enough as Bob contemplated a far more audacious travel goal.

"I connected with another View couple who I learned had some experience RVing in Europe. Their names were Tom and Judy Salmon and they had named their View Papillon," Bob explained. "Our plan was to ship our motorhome to Europe and I remember seeing it at the dock looking very tiny next to all the John Deere trucks that were also being loaded." 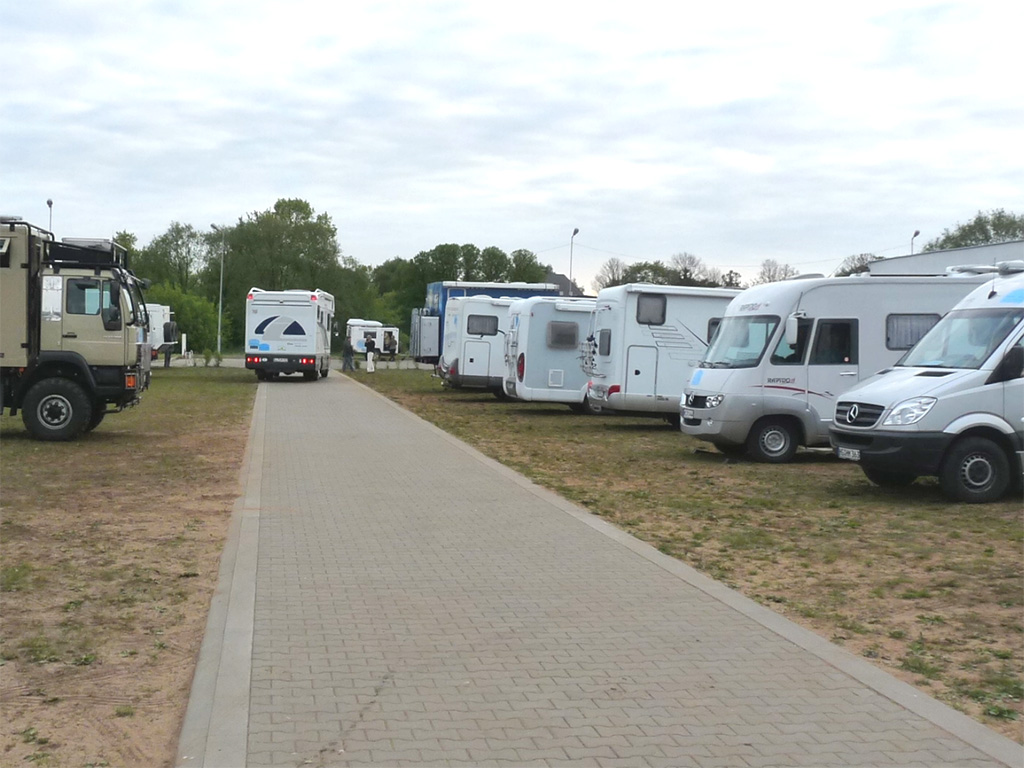 Bob and Maureen met their traveling cottage as it was driven off the freighter in Antwerp, Belgium, and immediately pointed it south to France. Bob recalls that, "Many European campgrounds are pretty nice, but they're very different from American ones. One big difference is that they mostly provide only 15 amp service and you need a long one-hundred foot extension cord to tie into a central power location. I also think that European campers are even more socially gregarious than Americans."

Maureen's condensed itinerary teases the imagination. Paris (yes they drove in Parisian traffic!), Normandy, Bordeaux, across the Pyrenees into the Basque region, through Madrid to Lisbon and the Portugal coast, back through Spain and Granada, Alhambra, and Barcelona. Bob pauses for a brief instant, "When we were in Gibraltar there was a moment where we contemplated putting the View on the ferry over to North Africa, but then decided to do the more sensible thing to follow the Moorish influence through Southern Spain." 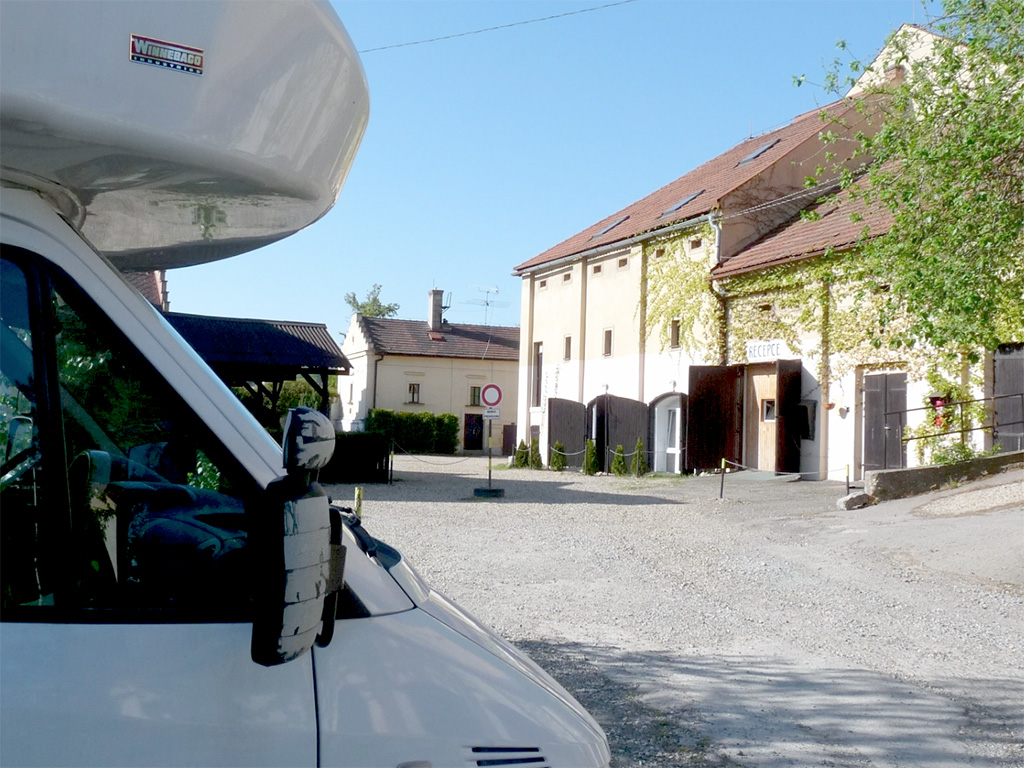 In a local village.

Bothan Taistil rambled through southern Europe by the villages of the famed Cinque Terre, on to Rome, Florence, and the sparking clear waters of Lake Como. Pointing north once again toward the cooler air of Switzerland, the scenic towns of Interlaken and the high peaks of the Jungfrau filled the panoramic view of the windshield each day.

"We put the motorhome on the Chunnel train to get to England," Bob continued. "Maureen got pretty nervous in the passenger seat as we were now driving on the wrong side of the road. In Europe, we were required to place a USA sticker on the back of the rig and in England I also had put a sticker on with an "L". That signified to other drivers to be cautious around me as I was a "learner." In all our travels the only accident we had was when I clipped the passenger side mirror, but fortunately a dealer got a new one for us in a couple of days."

Though many European campgrounds are away from the city centers, their public transportation options are better. Bob and Maureen had no problems getting anywhere then wanted by bike, bus, or train. And the reception managers at the campgrounds consistently spoke English and were full of travel tips, directions and ideas. 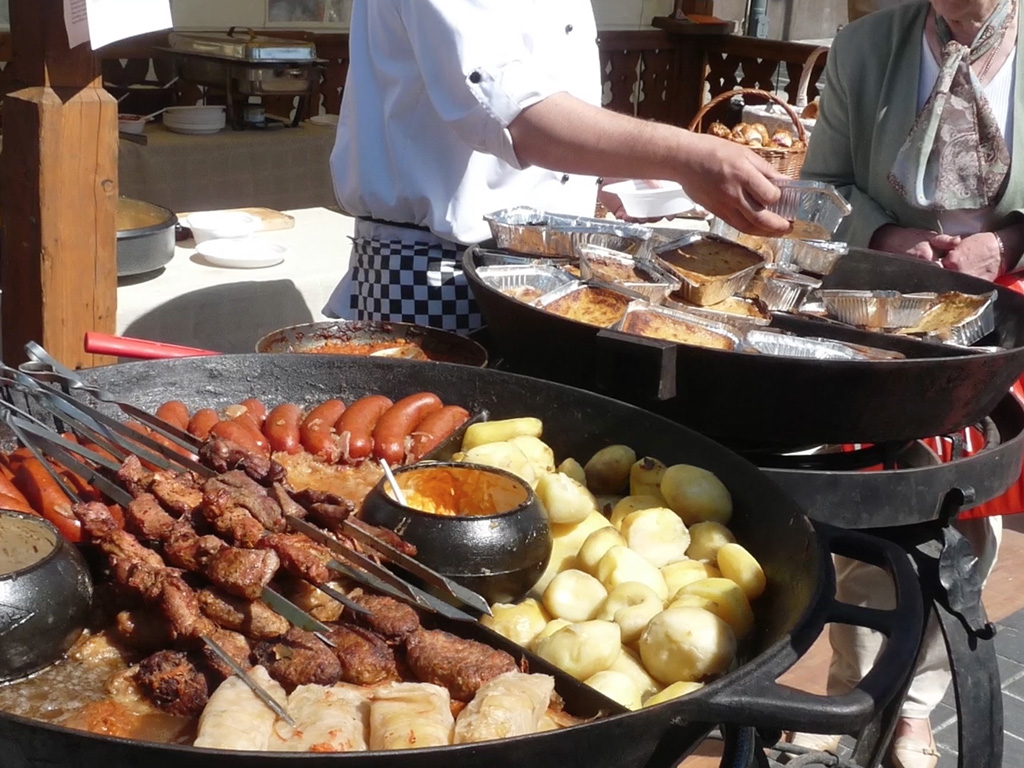 The first leg of their European adventure drew to a close as Bothan Taistil was driven back to the town of Leese, Germany. Bob's company had an office in Leese and adjacent to their offices was a stout building that they could store their motorhome in while they returned to the states for a few months. It was a perfect place to park it, but one with a chilling legacy. This was the only building the Nazis used in their start to develop germ warfare weapons.

Now, back in the US for a few months, Bob and Maureen spent their time on winter beaches in Florida and even a cruise. But, these pleasant diversions couldn't come close the thrill, romance, and adventure of their time spent in their beloved Bothan Taistil. In April, the couple returned and awoke their traveling cottage from hibernation. 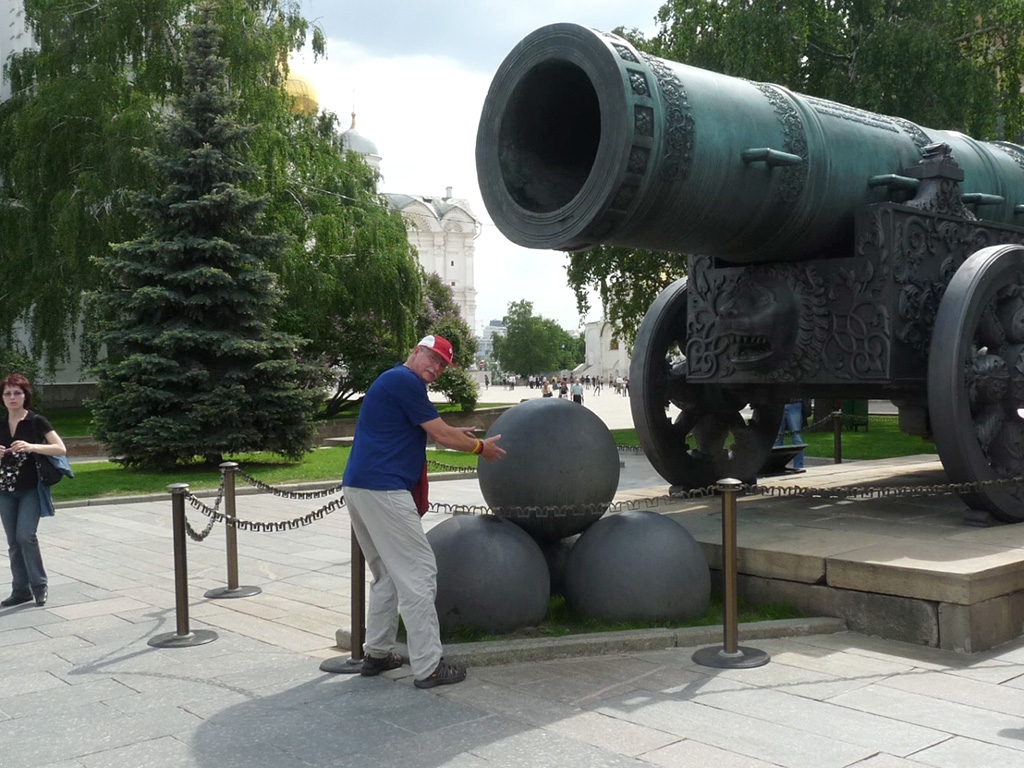 Bob sizes up a cannonball.

Bob's penchant for printed maps along with a GPS helped him devise a northern route that would take them to countries and towns far less familiar to most world travelers. They biked along the Danube, walked though Vienna and stopped in the Eastern European cities of Warsaw, Poland; Vilnius, Lithuania; and Riga, Latvia. Unlike Napoleon, their march to Moscow was one of appreciation, not conquest. They rendezvoused with Tom and Judy Salmon and together they joined an Italian operated caravan that included 14 French units made up of motorhomes and trailers. After crossing the border at Zilupe, Latvia they were on really rough roads. "It's as if they simply scraped a wide path across the land," recalls Bob. "There were several flat tires along the way with the trailers and whenever you got out of your rig you'd have to wear a bright safety vest, which was true of nearly everywhere we traveled." 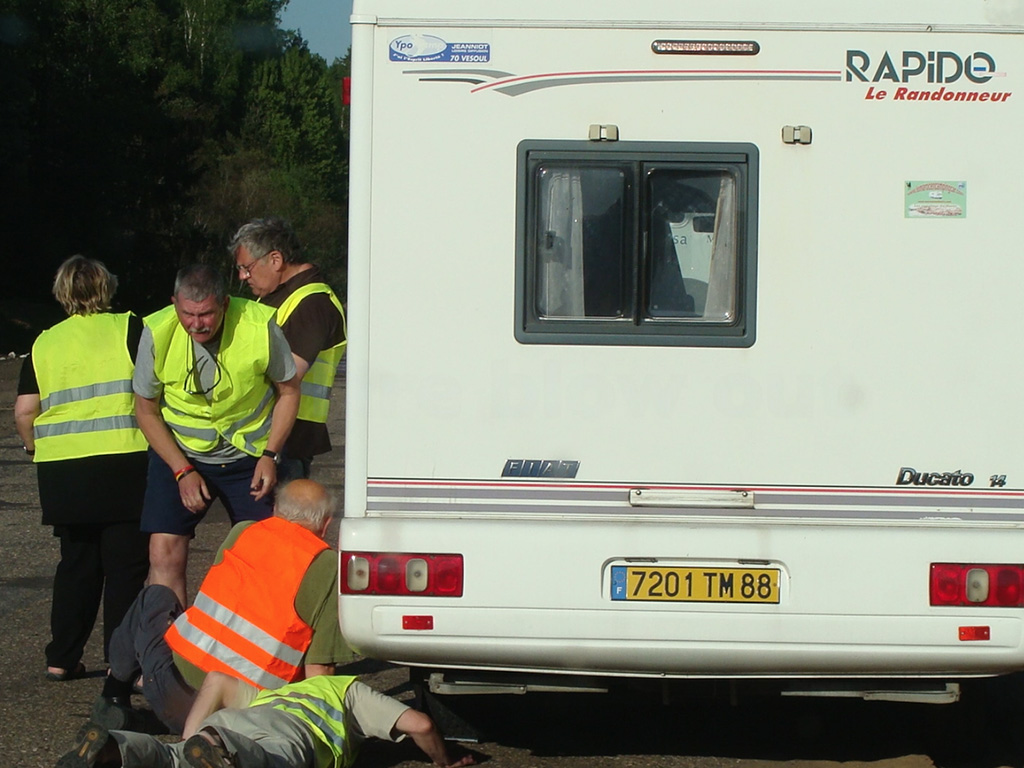 Safety first: Europe requires RVers to wear vests when outside of their vehicle on the highway. 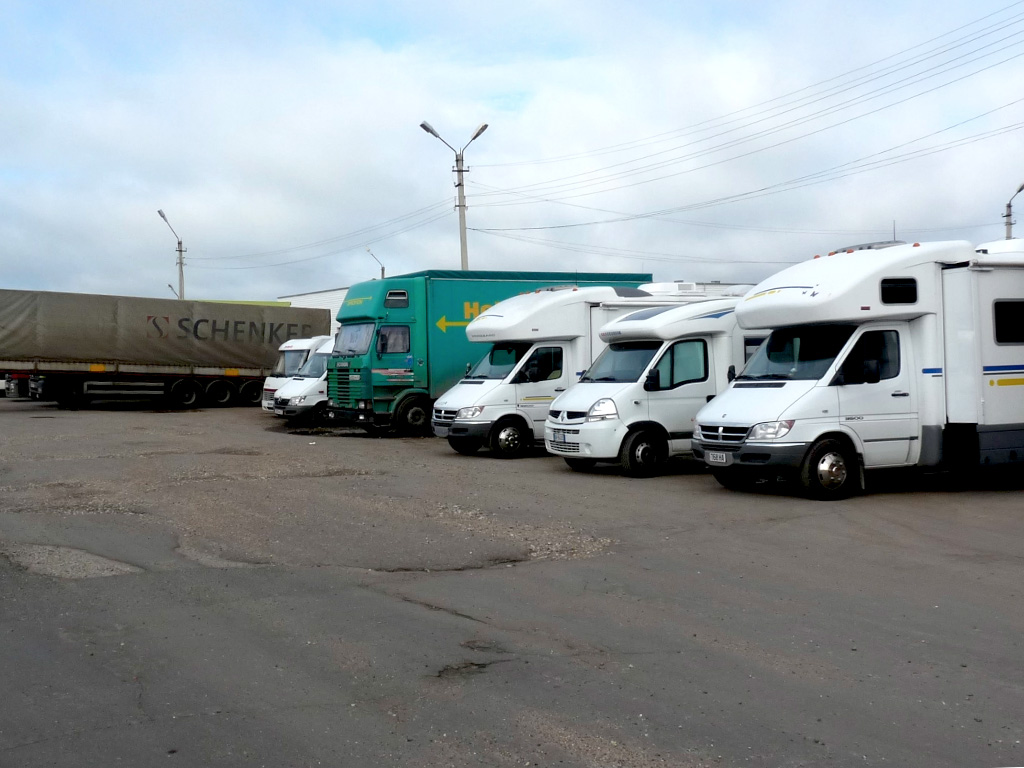 The 400+ mile trip to Moscow would take two days. The caravan pulled into a truck stop to spend the night. "It was a fort!" exclaims Bob. "An honest to goodness fort with barbed wire, walls and everything. It was designed to protect the truckers from being robbed." 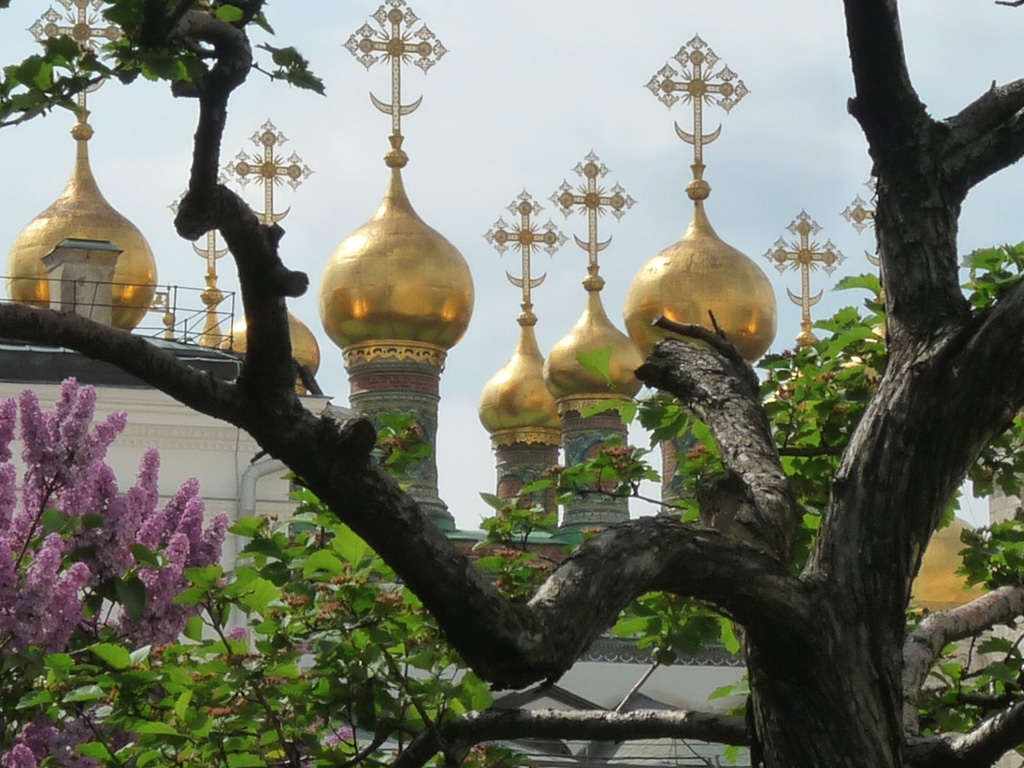 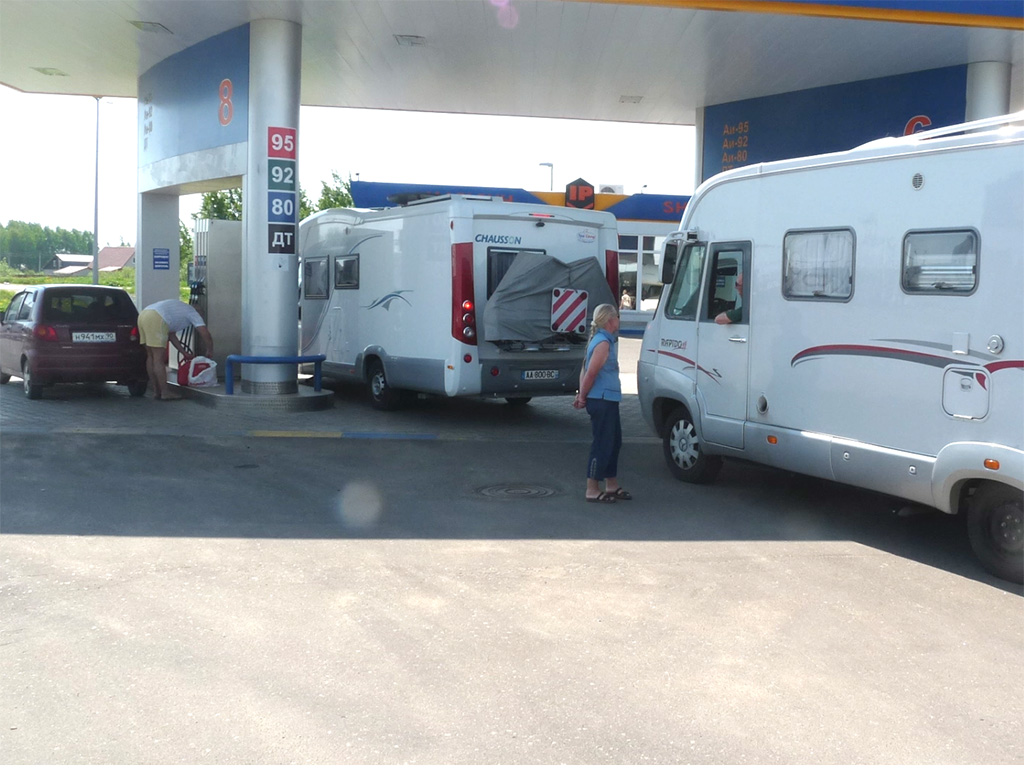 Filling up in Russia.

Closer to Moscow they encountered the Golden Circle. It's a ring of towns beyond the outskirts of the city where there are beautifully restored churches, many with the traditional onion shaped gold domes. In Moscow Bob and Maureen toured the Kremlin and many other local museums and markets. But beyond seeing the rich history of Russia they both agreed that the camping experience was. . .well. . .rather primitive. 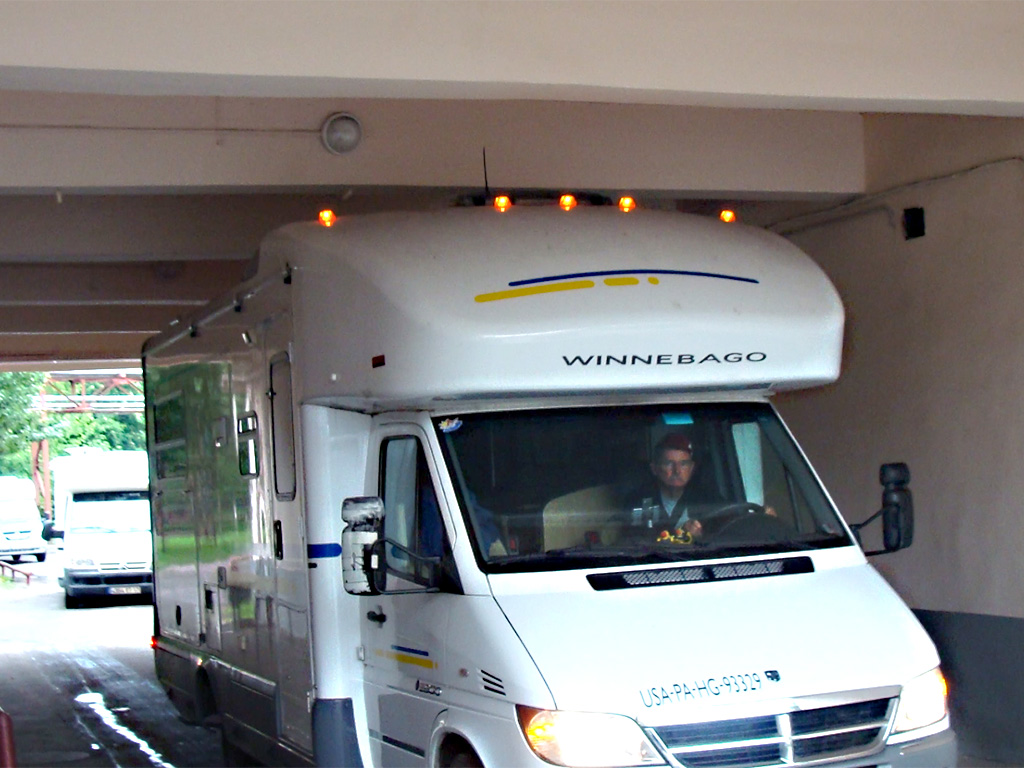 While Maureen directs, Bob inches under a very low clearance.

Bob smiles, "I remember that we parked near a gymnasium and the clearance was so low I thought I would have to let the air out of my tires to get under it. Fortunately, Maureen watched from the outside and we barely squeaked under. To add fresh water I had to cut a big opening from a plastic jug, walk across to a faucet, fill the jug and then walk back and pour it into my tank with a makeshift funnel. I had to go back and forth quite a few times to fill the tank. And dumping the holding tank now that was something different. It wasn't anything more than an open manhole that I carefully had to drive over and then get out and pull the drain slide." 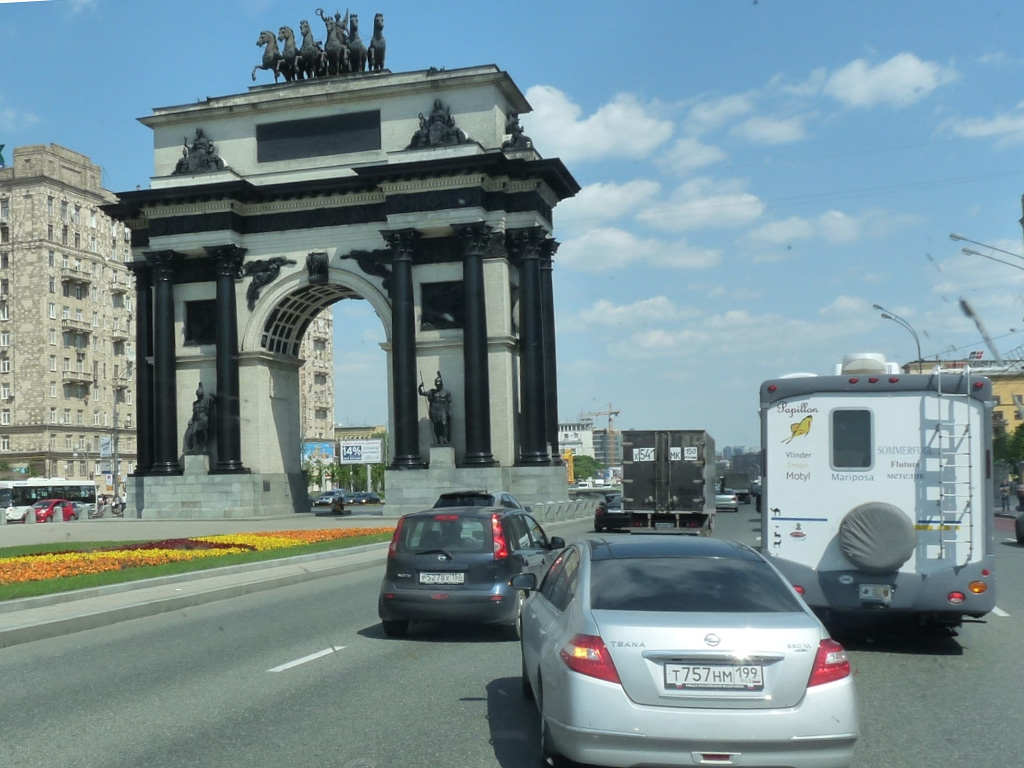 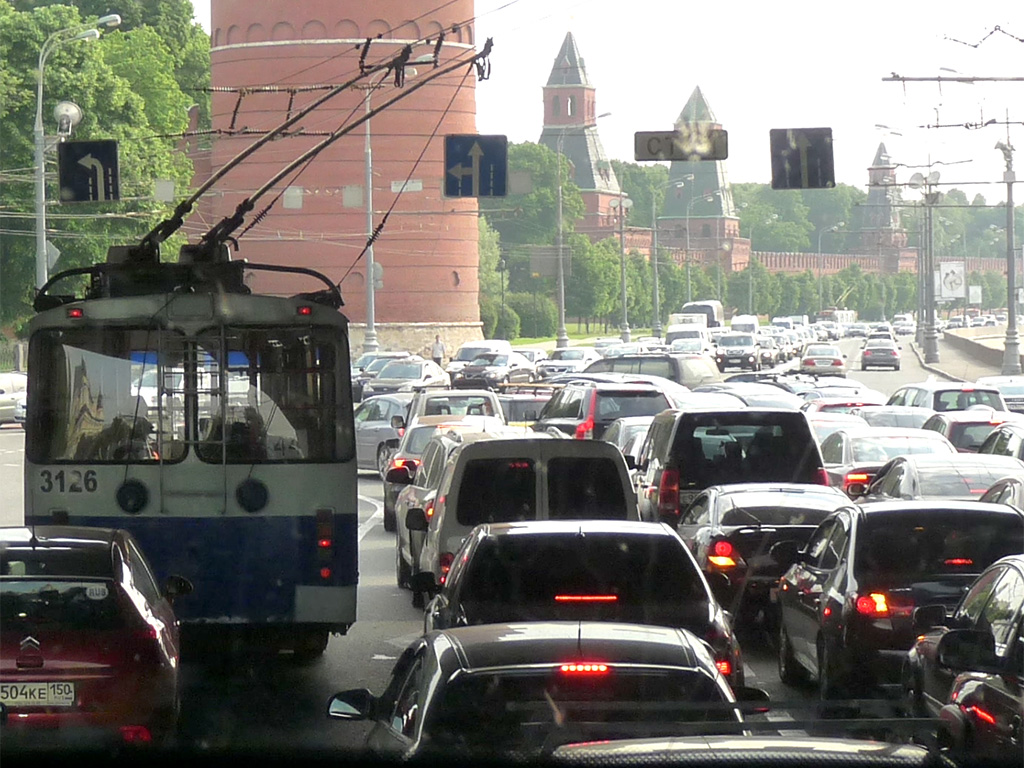 From Moscow the caravan drove northwest to St. Petersburg and the famed Hermitage museum, the Church of the Spilled Blood, and Catherine's Palace. Not far away a long line would await them at the Russia-Estonia border and the final leg of their trip back to Germany.

For as grand and adventurous as Bob and Maureen's travels were, they concluded without any bad incidents. Beyond the replacement of the mirror, Bothan Taistil proudly wears a scratch or two as medals of valor from its epic journey. And it wasn't until their preparation for shipping their little View home that Bob encountered an officious and misinformed German customs agent who claimed that their coach would not clear American homeland security unless it was completely emptied to the point of its original purchased condition. If you're a motorhome owner you can surely relate to the incredible hassle Bob and Maureen went through to entirely empty their coach and box up every last one of their possessions separately. All for nothing!

On a day, sometime back in 2006, a shiny Winnebago View rolled out from the factory floor in Forest City, Iowa. Like others before and after, this little View moved along a line being crafted, section by section, component by component, by American hands. As the final pre-delivery checks took place and a driver rolled it out of the plant, little did anyone know of the stories it would see and the unique name soon to bestowed upon it by a spirited couple from Pennsylvania. And so the adventures of Bothan Taistil began, written in diesel fuel and retold with love.