My 5 Must Haves for Summer

I don't like bugs or humidity or eating outside or sleeping in tents or any of that typically camping experience stuff. Really, it's a miracle my husband convinced me to move into an RV at all. I am not the ideal Winnebago candidate.

But with the help of the most powerful air conditioner in the world, Heath convinced me that living in an RV would not be at all like real camping. And other than the fact that I woke up with a spider bite on my leg last week, he's held up his end of the deal!

After two years of RVing full-time, I've become a little more outdoorsy. I've started planning all of our routes based on which national parks we can visit, with the caveat that I will book us at nearby parks that offer electricity and water. But our goal this summer is to be as active as possible (AKA keep us from working in front of our computers all day in the RV) while we tour the Rocky Mountains from southern Colorado all the way to Banff National Park in Canada.

So to help us get outside (okay, to make it easier for Heath to convince me to come outside with the bugs and the bears), we've invested in five awesome things to make our summer travels as awesome as possible.

Heath and I both attended college in Austin, Texas which, much to my surprise, is a hot bed for stand-up paddle boarding and kayaking. Last year while spending our fall in Austin, we went kayak shopping for Heath and ended up buying two inflatable kayaks for the cost of one hard shell kayak. Little did I know, this would soon become my favorite form of "exercise" and a great way to work on my tan. 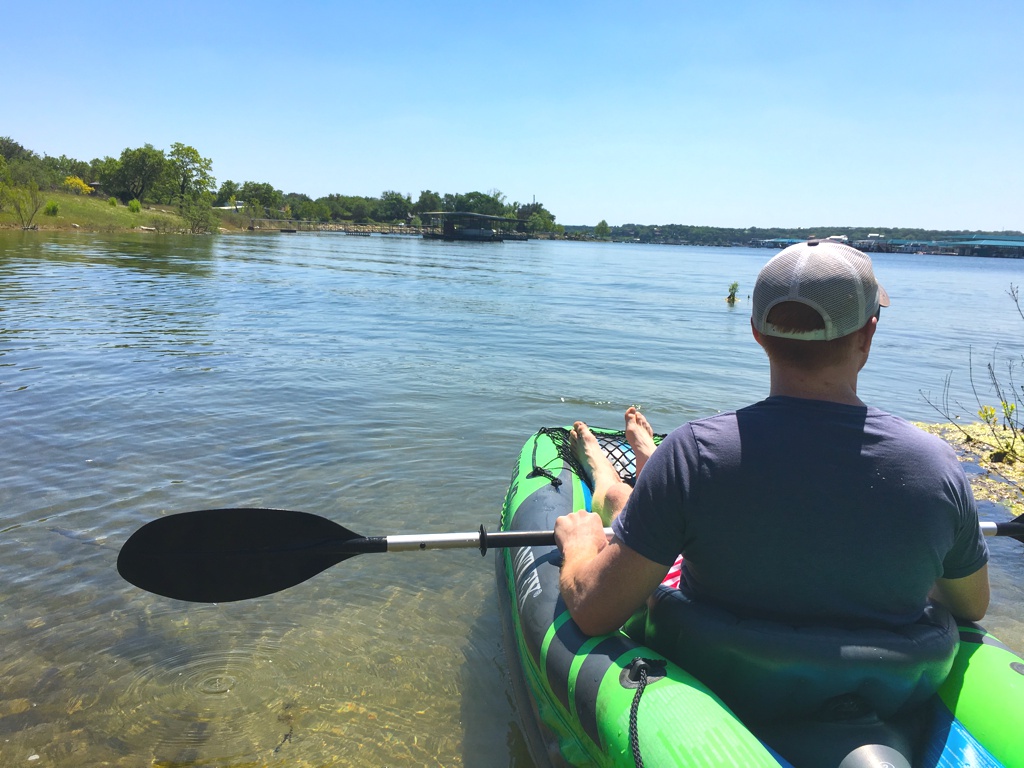 I was initially pretty nervous about kayaking--especially in a kayak that could easily get a hole or go flat leaving me stranded in the water--but these are by far my favorite outdoorsy purchase. My mom visited us on the lake recently and even enjoyed kayaking! Sure, she freaked out thinking she was going to capsize at any given moment, but she made it out alive and even climbed out of the boat onto the dock without falling overboard. I inherited my dislike of the outdoors from her, so the fact that even she loved kayaking is really saying something!

We prefer the inflatable kayaks over hard shells because they are extremely easy to store. We don't have to worry about strapping down large kayaks on our RV or car. Plus, Heath borrowed a friend's kayak while my mom used his and he sank immediately. So inflatable might just be the safest option!

Why did I think biking was just for kids? I haven't owned or ridden a bike for at least a decade but Heath has been begging for a bike ever since we married. I finally gave in and surprised him with a bike for our anniversary. His face in the bike shop was like a kid on Christmas morning. 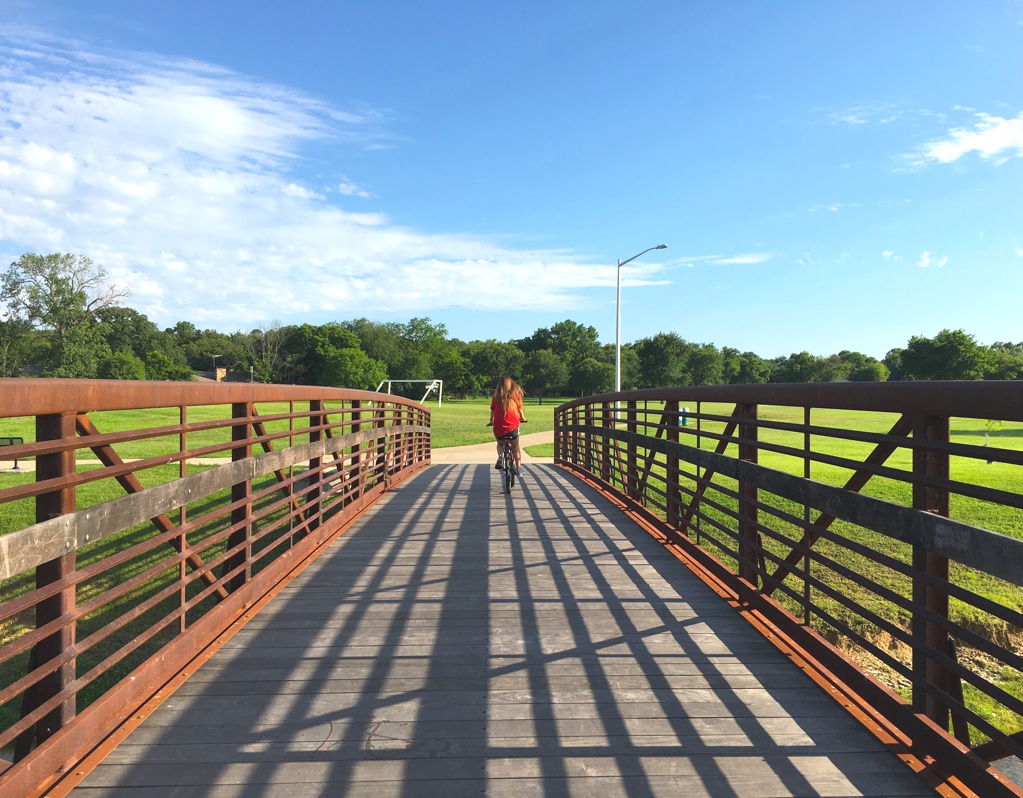 He kept pulling bikes off the rack and riding up and down the aisles. People stared. But it has been a great investment, and way cheaper of an expense than I realized. Now I can finally be that person on hiking trails blazing past all of the hikers on my cool pink bike. I just need to buy Heath a good helmet before he tries to do something crazy.

Believe it or not, I'm allergic to smoke. Yes, smoke. We used to travel and cook with your average charcoal grill, but the food Heath grilled would make me so sick from all the smoke that the meat would absorb. (I know, I'm a Texan who can't eat at barbecue restaurants, it's a tragedy!) Eventually we just threw out the grill and stuck to cooking on the stove. 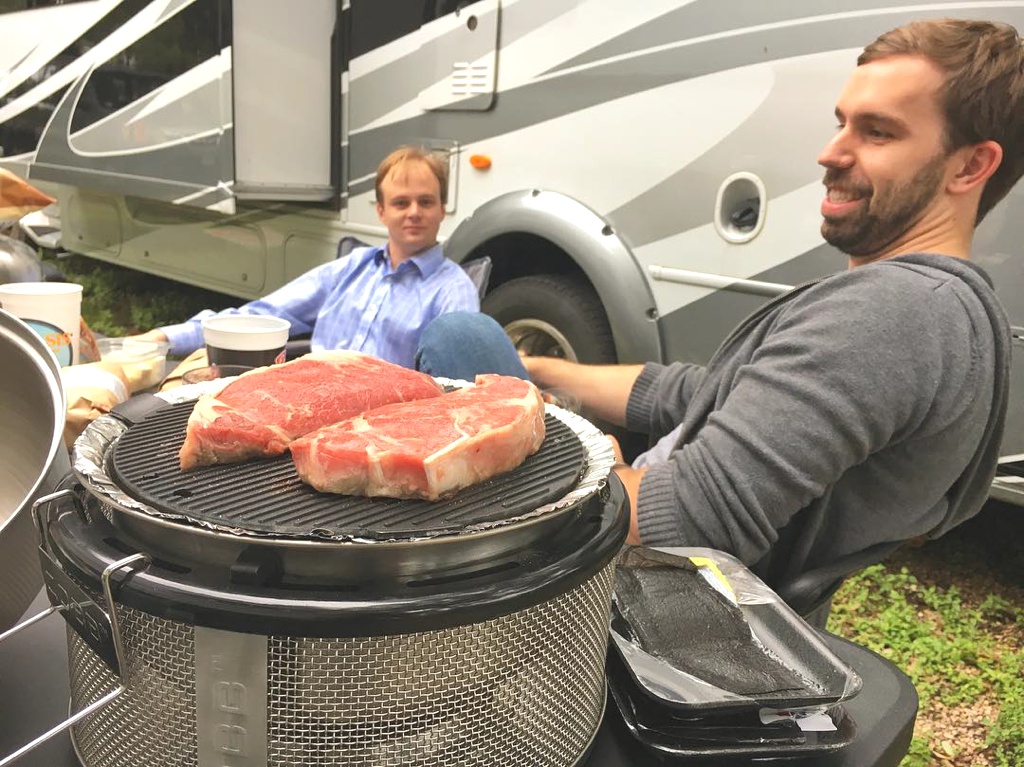 We recently picked up a Cobb grill, which if you haven't heard of it, is very similar to the Green Egg. It's small, weighs less than 20 pounds, comes with a carrying bag, and emits no heat, so you can use it on top of picnic tables at parks with no issues. We are completely obsessed. Heath loves grilling and he can finally cook me food that doesn't taste, well, gross. 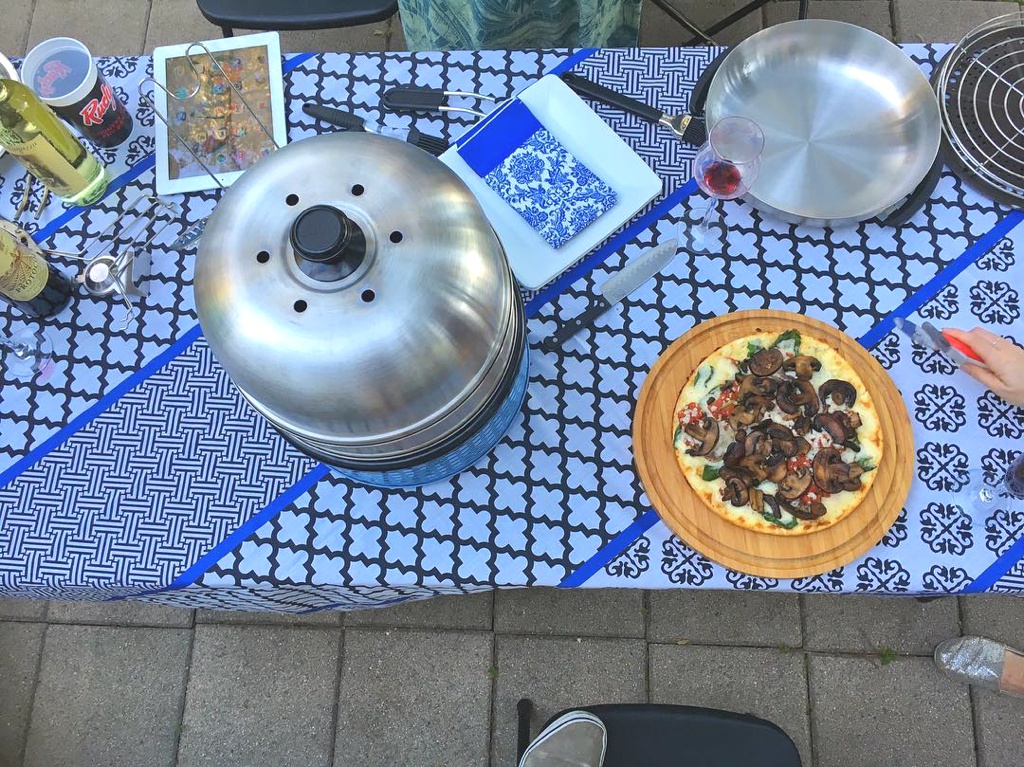 We've only grilled meats on ours so far, but we've seen others grill pizzas and even make a cake! I'm super excited to this more, especially so we can avoid using our oven and heating up the RV!

Heath is from a very small Texas town. So when he asked me if I wanted to play corn hole or washers, I responded with a "Huh?" Apparently these are extremely common games, that I had never heard of. (Am I alone in this?) 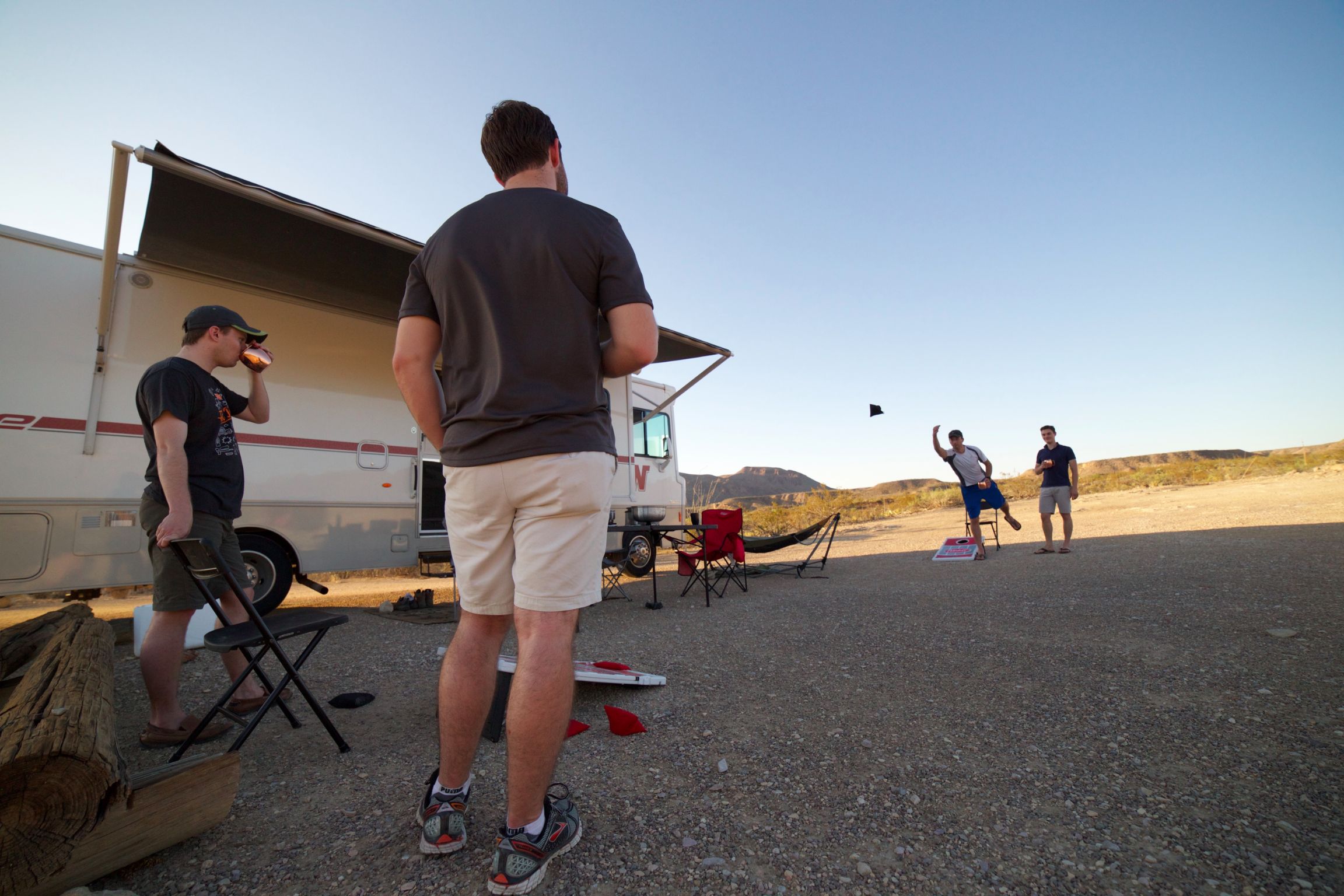 Now we travel with both and play them almost every time we have company. Plus, we've lent them out to our neighbors to play, so the lesson here is that if you bring outdoor games, you'll become the most popular couple in the RV park and make new friends on a daily basis. 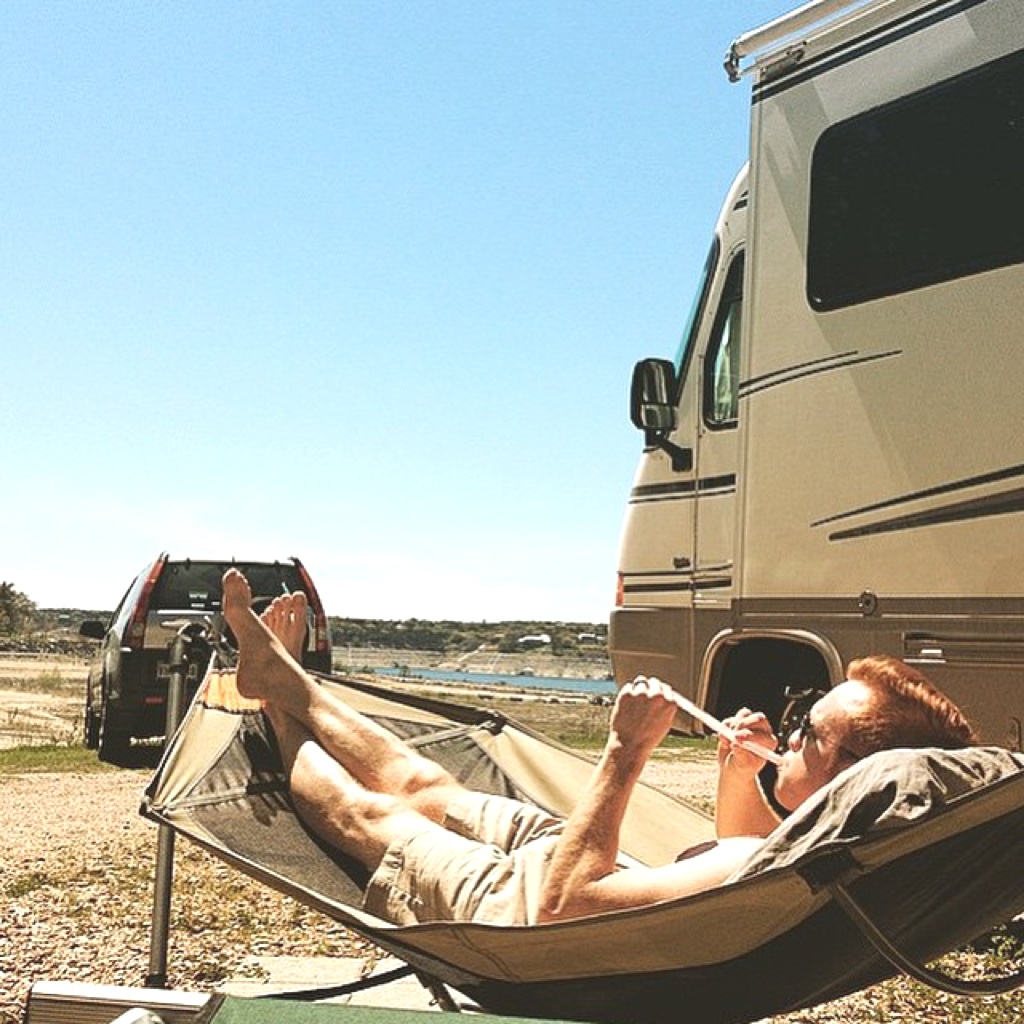 If nothing else, you need a hammock in your life. This is non-negotiable. Some of my best naps have been in our hammock. We purchased a stand-alone hammock that comes with it's own stand and fits in a carrying case, so we never have to worry about searching for trees or tying the hammock properly so it doesn't fall down. We just pop up the stand and voila! You're ready to lounge. After all, with all the kayaking and biking and hiking and spending all of your time exploring, you'll want a nap.