Liftoff: the Herzogs hit the highway

"We do not take a trip, a trip takes us." Maybe John Steinbeck was right. I'm not sure which comes first--the notion or the motion? But I do know this: As the RV Industry Association's "Explore America Family" for the past 15 summers, we -- the Herzog family -- have traveled more than 100,000 miles through 48 states, from the Green Mountains of Vermont and the Bluegrass region of Kentucky to Yellowstone and the redwoods.

Room with a view, overlooking the Pacific.

And a Winnebago has always taken us there.

For about a decade, there were four of us along for the ride--me, my wife Amy, and our two sons, Luke and Jesse. We journeyed from coast to coast and from infancy through pre-adolescence--until a few years ago, when the boys continued a multi-generational family tradition of spending their summers at an overnight camp in northern Wisconsin. But Amy and I still rolled on--just the two of us, a multi-state second honeymoon of sorts, in a Winnebago Via. It was sleek (a smidge over 25 feet long), stylish and basically perfect for our needs. 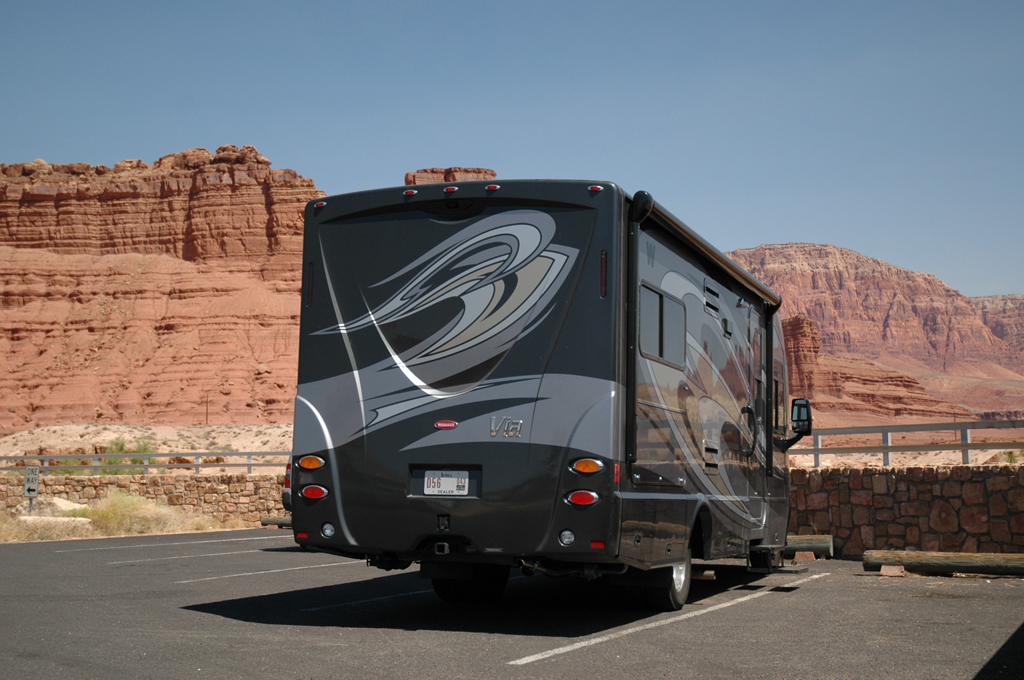 Prowling the canyon lands of the desert southwest in a Via.

Before that, in the summer of 2011, our 10th straight year as a summer adventuring foursome, we opted (naturally) for an Adventurer 37F. The king-sized bed, the queen-sized sofa sleeper, the one-and-a-half bathrooms... we felt like road royalty, which was good because we pointed ourselves toward the majestic Rockies. The two LCD TVs came in handy as we binge-watched Star Trek: Voyager. Again, appropriate, because we boldly went where even we hadn't gone before--trekking to marvels like California's Trees of Mystery and Colorado's Royal Gorge and Utah's Golden Spike. 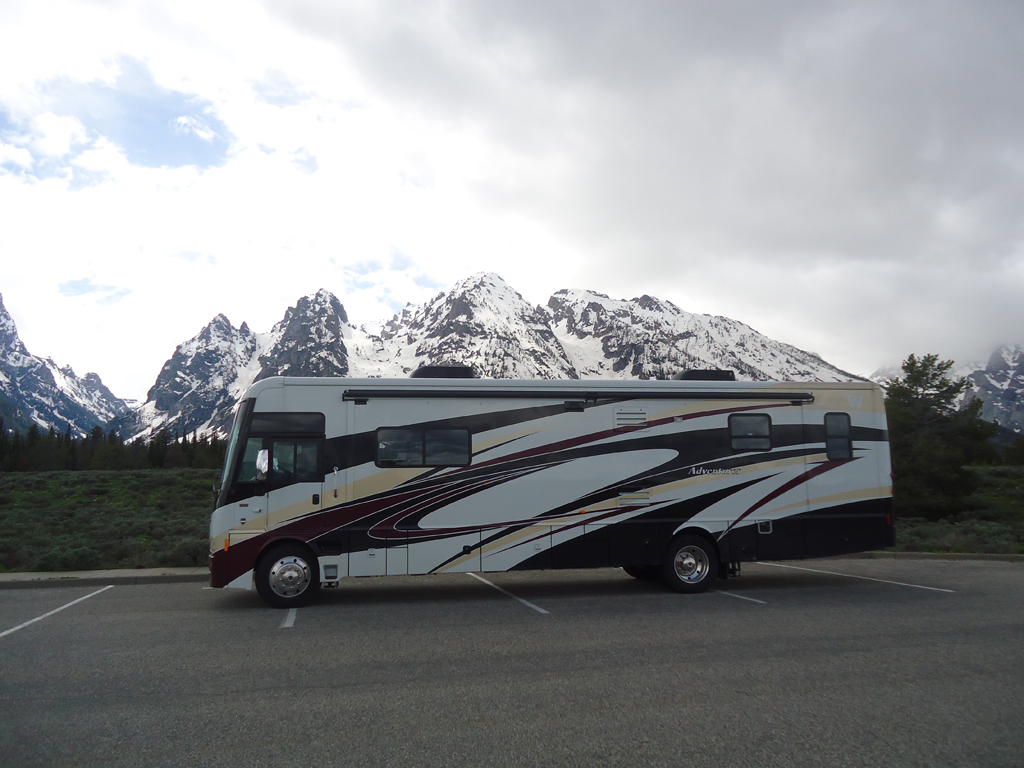 The Rockies look bumpy, but the Adventurer is a smooth ride.

A couple of years before that, in 2009, we even drove a concept vehicle, an electric-diesel hybrid--a rolling reminder that Winnebago is always testing and innovating and looking forward. The fact that it happened to coincide with publication of a children's picture book that I had written called S is for Save the Planet, well that was serendipity. And S was also for the Southeast. We explored everywhere from Nashville and the Natchez Trace Parkway to Key West and the Kennedy Space Center. 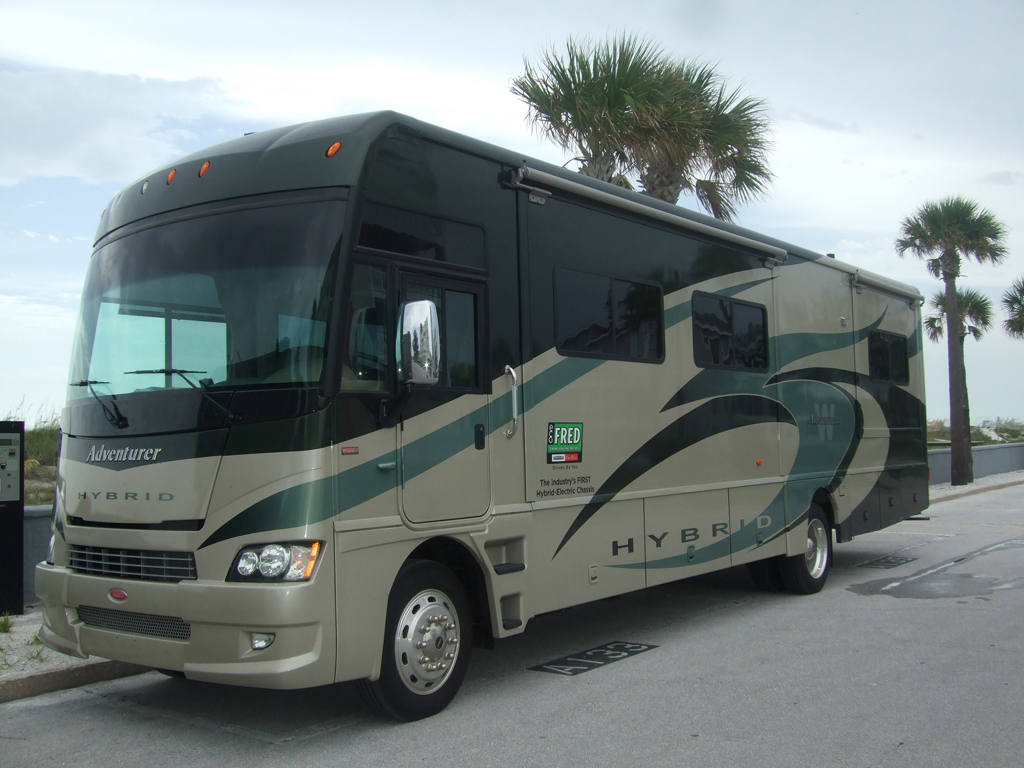 Our prototype test rig a few years ago.

So what about this year? Well, we're going Back to the Future.

I've long described the RV experience as a perfect combination of nostalgic sensibilities and modern technologies--a throwback vacation utilizing futuristic innovation. Why not combine the best of past and present, right? More than four decades ago, it was a Winnebago--with its iconic Flying W and "eyebrow" design--that sparked America's romance with the road trip. And now the design is back in the form of the Winnebago Brave 31c--retro-styling, but with the modern bells and whistles that we have come to expect. 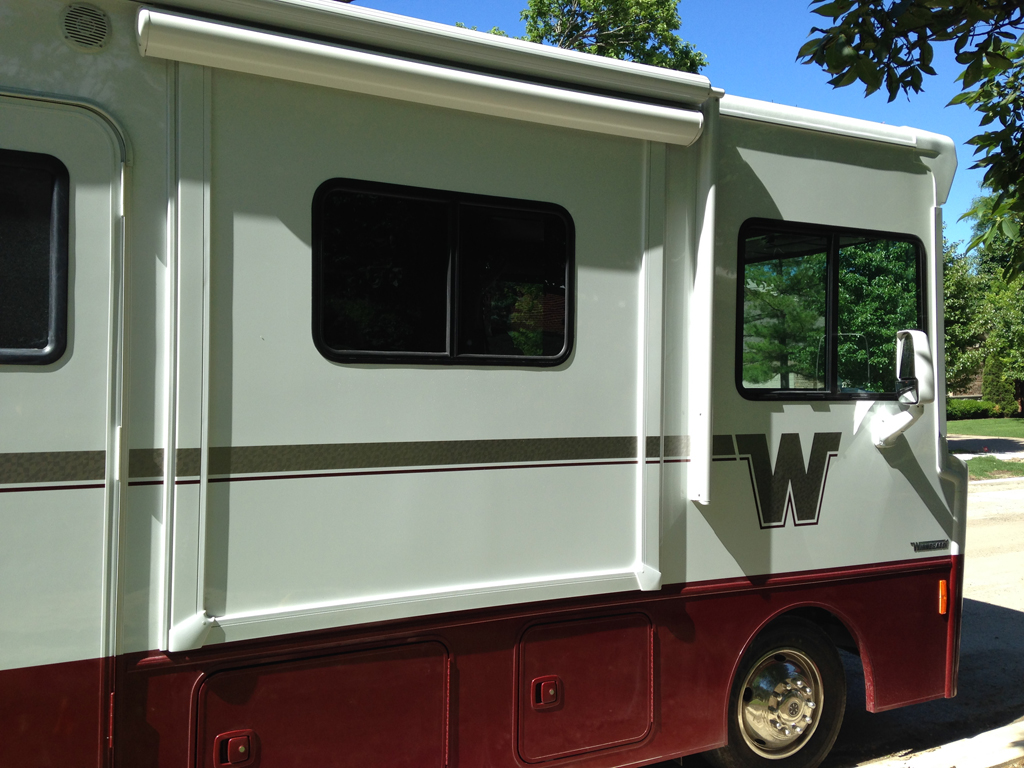 A paint scheme named for a Tommy James and the Shondells song? Why not? It's perfect for the Brave.

The exterior color scheme is called Crimson--n-Clover (other options: Woodstock tan, Mello Yellow, Bell Bottom Blue). Inside, we've added a peace sign pillow to complete the vibe. And we've brought along an iPod brimming with Janis Joplin and John Lennon. 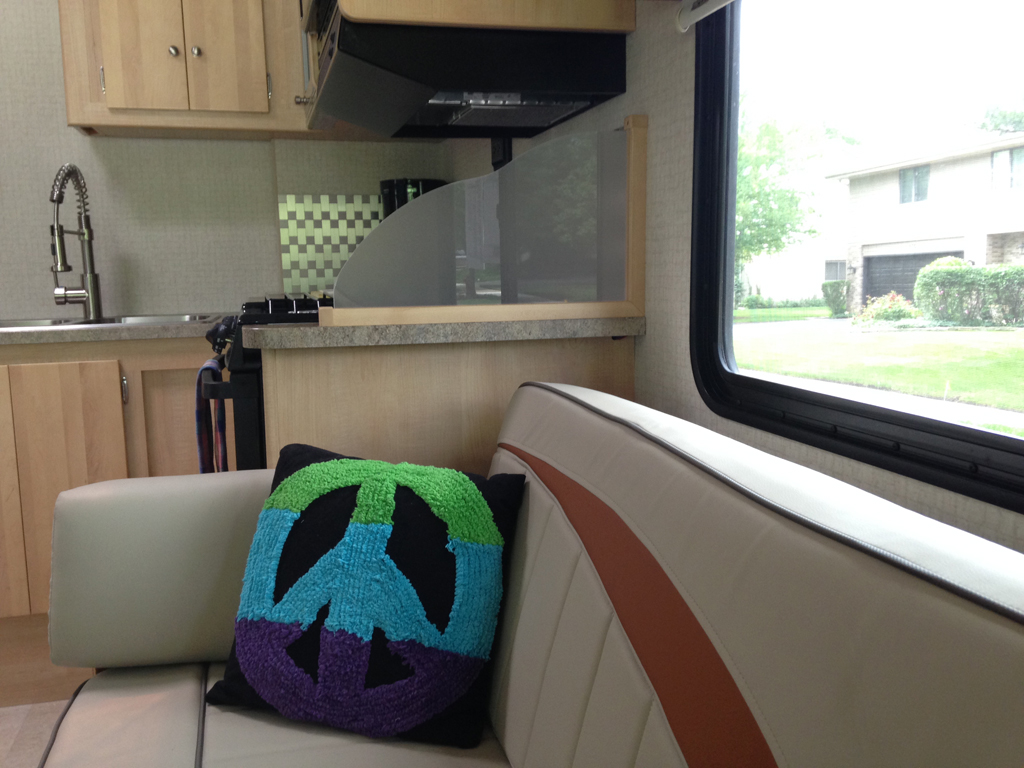 Channeling the 70's with our own little touch.

Our almost-33-foot peace-mobile is loaded with features, including two slide-outs (one of them a full-side slide), a king-sized bed, an electric-powered loft bed, a moveable dash console that slides between driver and passenger, and two LCD TVs (one of them a 46-incher that pops up magically next to the dinette). 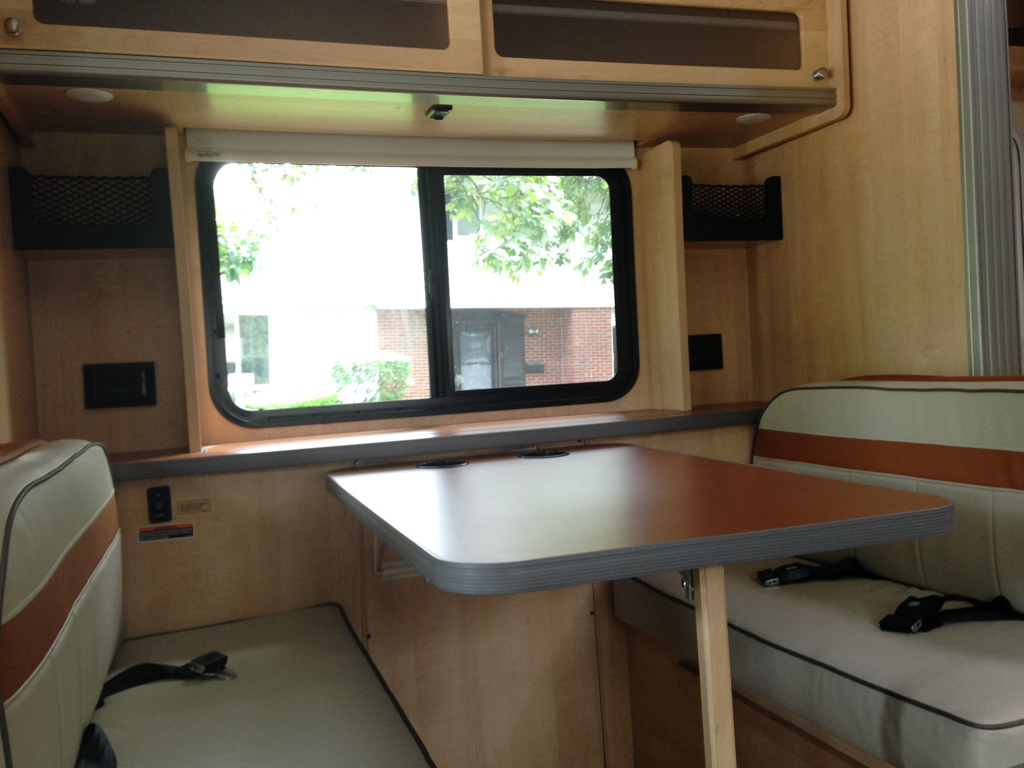 It's a great dinette view with a window.

So the Brave looks like it will take you back in time, but it acts like a window to the future. Hence, Back to the Future. In fact, it turns out that 2015 is the very year that Marty McFly chose for his futuristic trip in his time machine (in the sequel). Yup, believe it or not, we're there. 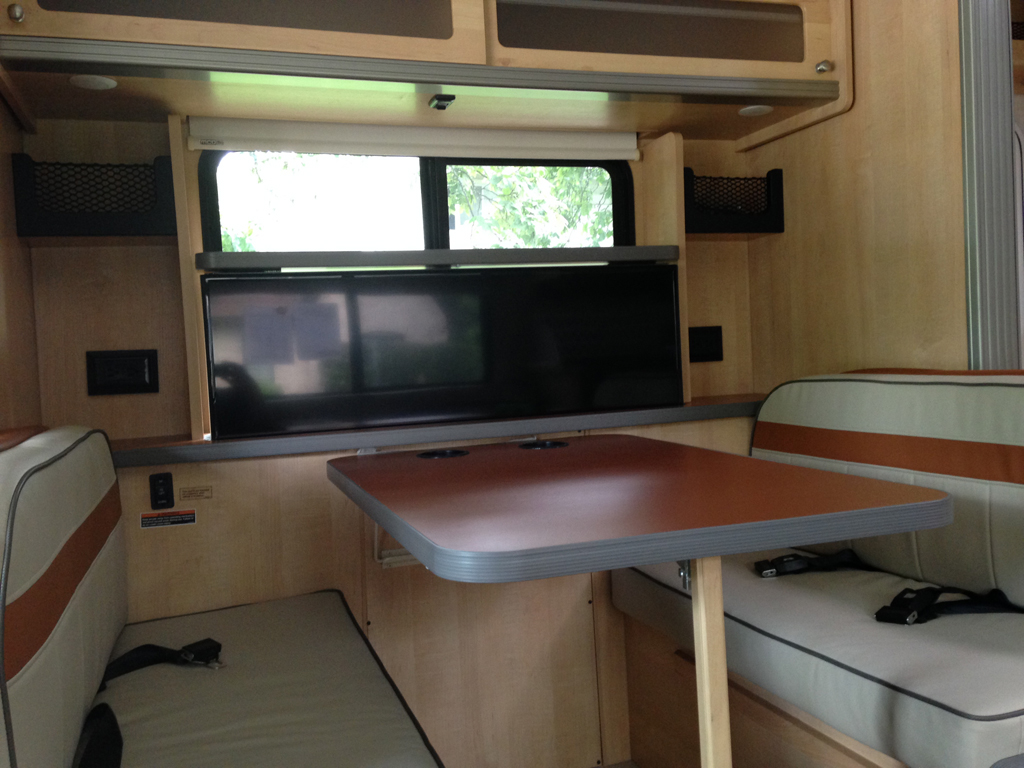 But wait. What's coming up from the counter?

Maybe we'll watch that movie again this summer. Of course, his time machine was a Delorean. 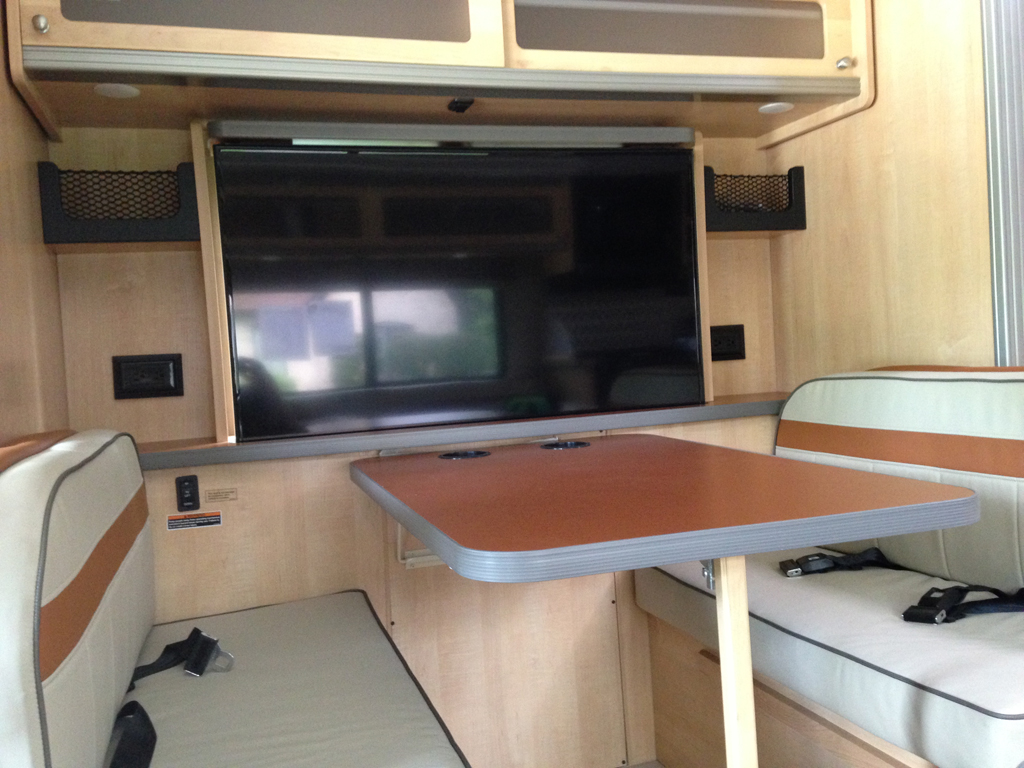 It's movie night! Or maybe even movie morning.

Where will this John-Steinbeck-meets-James-Bond piece of machinery take us this summer? Starting from Chicago, we're going to traverse 11 states in six weeks. We'll experience Mount Rushmore and Minuteman missiles and minor league baseball; Flaming Gorge and Devils Tower; Lake Itasca and the River of No Return. We'll explore Fargo and Forest City (Winnebago's hometown); Sioux Falls and Spokane and Salt Lake City; Boise and Billings and Bismarck; Milwaukee and Madison and Minneapolis and Missoula.

We'll see the Great Falls of Montana and the Badlands of South Dakota. We'll look up at the World's Largest Buffalo and peer down from the dizzying heights of Going-to-the-Sun Road in Glacier National Park. We'll watch a night blast at the Crazy Horse Monument. We'll channel Wild Bill Hickock in Deadwood and George Armstrong Custer in Little Bighorn. We're even going to zip through a town called Zap. 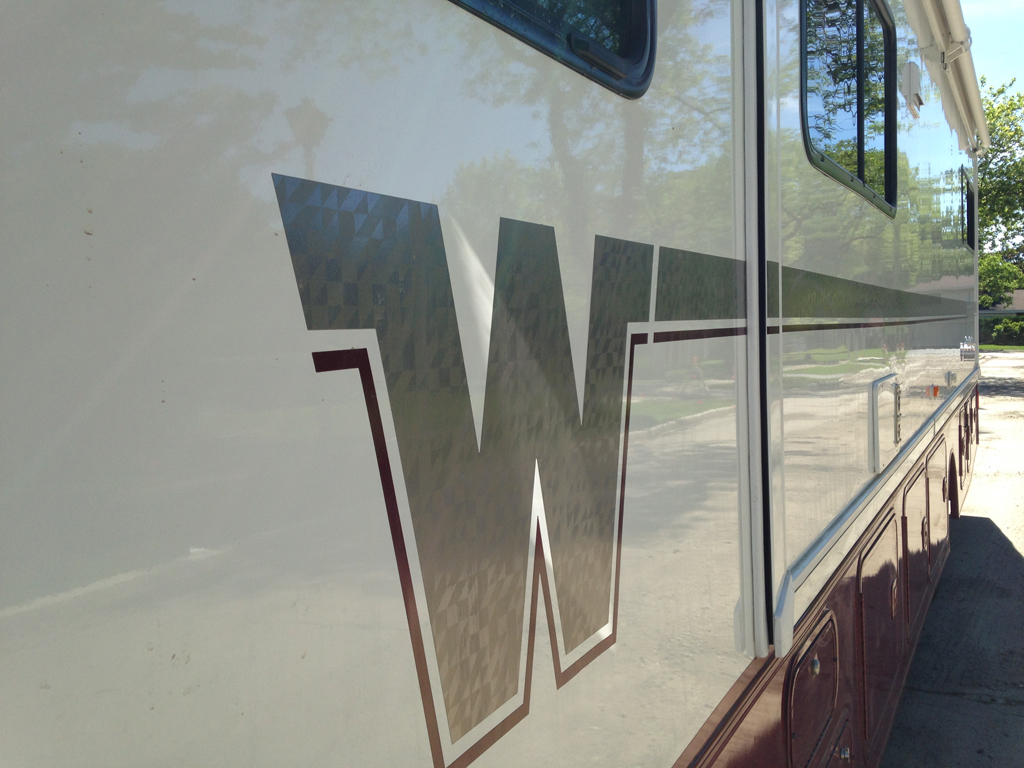 Loud and proud. The Flying W wraps across the Brave.

So come along for the ride Back to the Future. There aren't yet any flying cars, but the Flying W will do just fine.