EKKO Origins: How VanLifers Helped Develop this New Ultra-Compact Class C
An inside look at the research that went into this unique Winnebago motorhome.
By: James & Stefany Adinaro 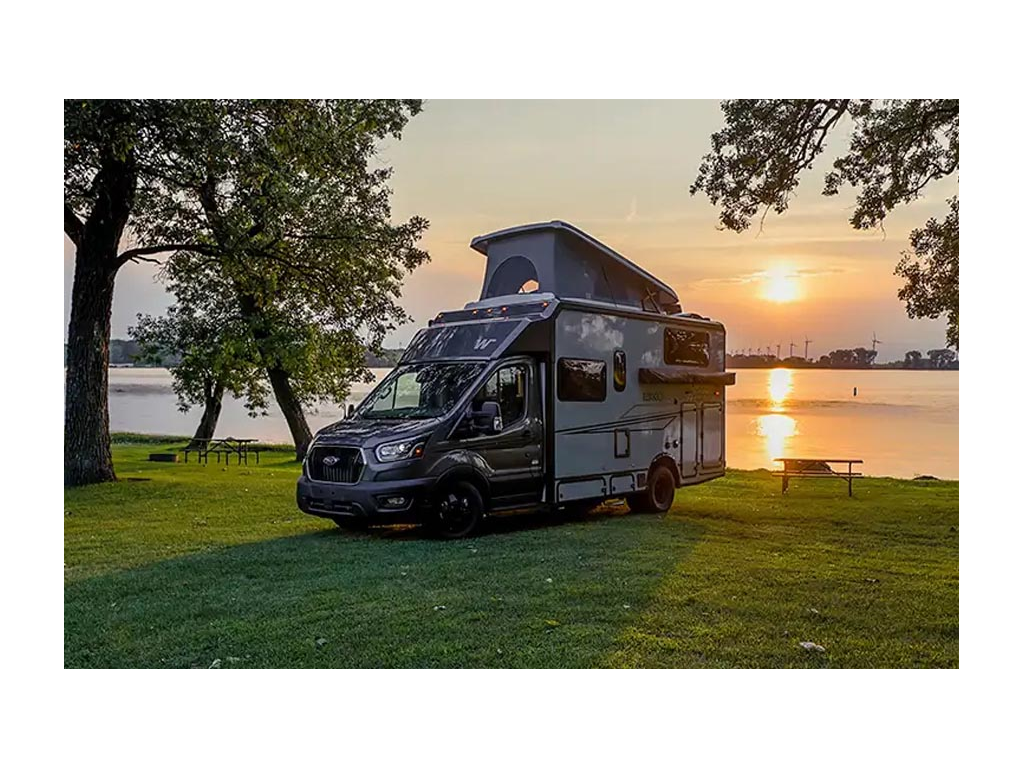 Have you ever wondered how Winnebago comes up with an entirely new RV? I’ll be honest, I never thought about it before myself. Turns out it’s a long and involved process that takes many years. The EKKO, Winnebago’s newest RV, is a perfect example.

The EKKO is a unique Class C RV. It has a similar footprint to many campervans, making it one of the smallest Class Cs around. The ultra-compact size and its large gear garage make it an exciting option for RVers like James and me who prefer to stay small, but still want to haul ‘toys.’ 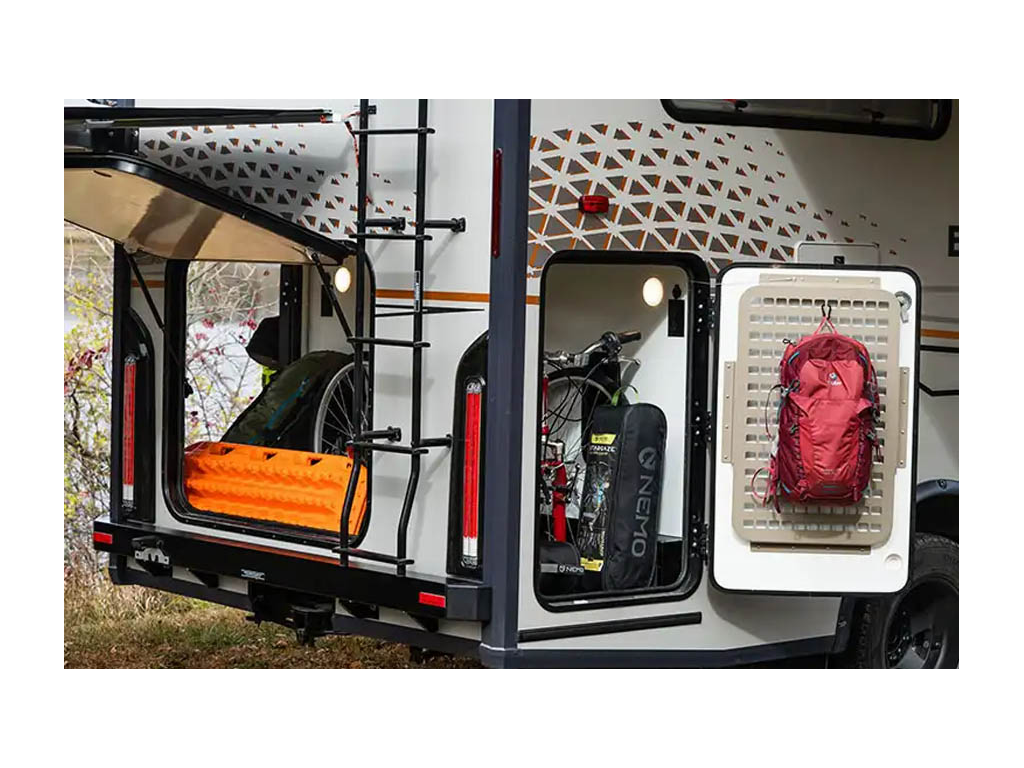 The EKKO has been years in the making and comes with quite an interesting backstory, too. Well, at least to me and James it’s interesting, because we happen to have a small part in it. And it’s quite possible that you also influenced the design, and don’t even know it! I’m jumping ahead, though. Let’s back up. 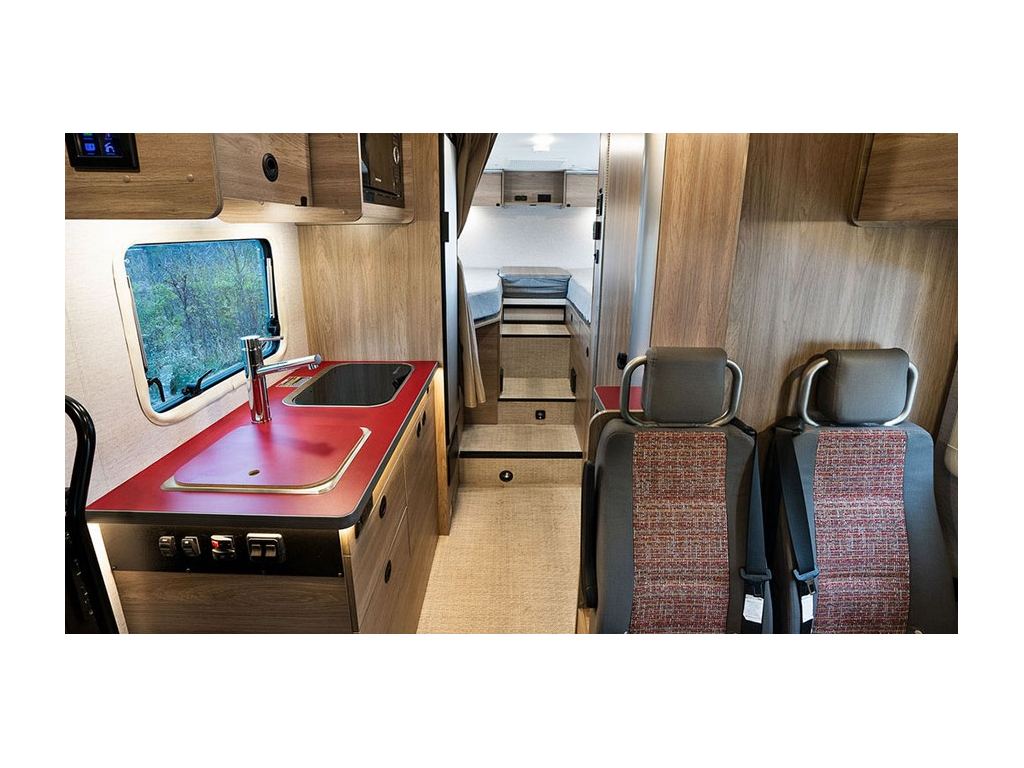 In August of 2017, James and I RVed around four different European countries. After a stop to tour the impressive Truma facility in Munich, we headed to Dusseldorf for our trip’s grand finale – attending the biggest RV show in the world: Caravan Salon. 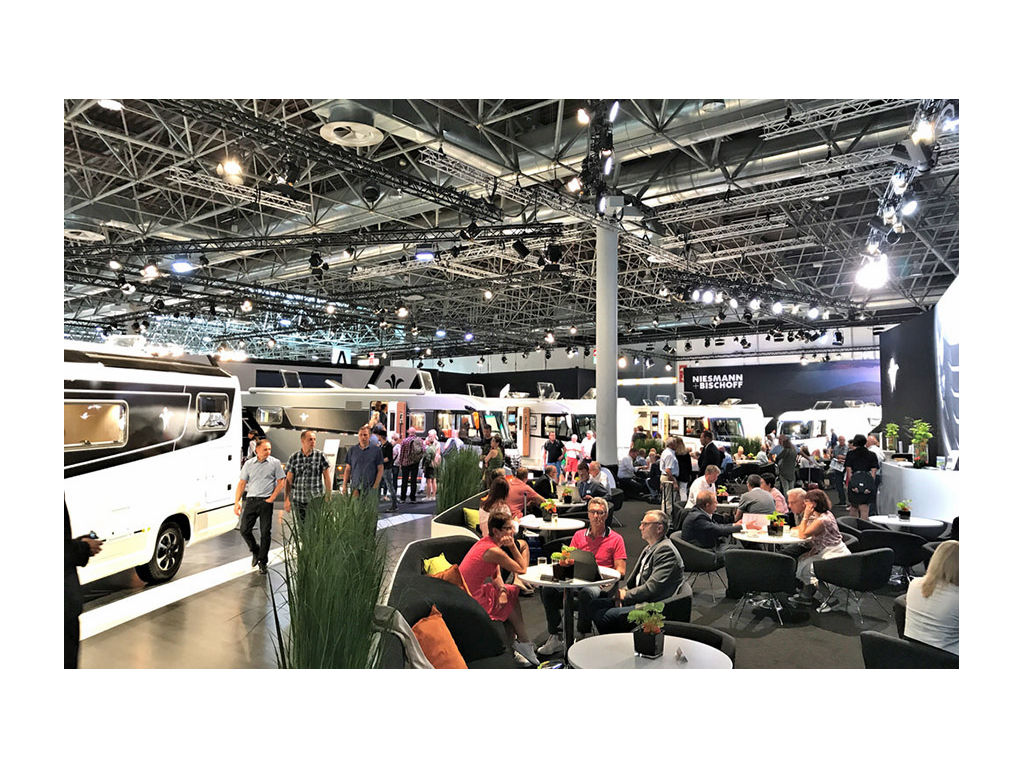 We were far from the only Americans at the show. Winnebago sends their product managers and designers to Caravan Salon each year, too. They have many suppliers based in Europe: Mercedes, Truma, Dometic, Tecnoform, Froli, Thetford/Norcold, etc., so it's a great opportunity to meet the design teams and also research European trends.

Russ Garfin, the Director of Compact Coaches, was one of the Winnebagans at the show that year. We were already friends with Russ through our work promoting healthy RVing on our website, “The Fit RV.” So, when Russ found out we were attending the show, he suggested we meet up and tour some coaches together in order for him to get our American perspective on the European designs. 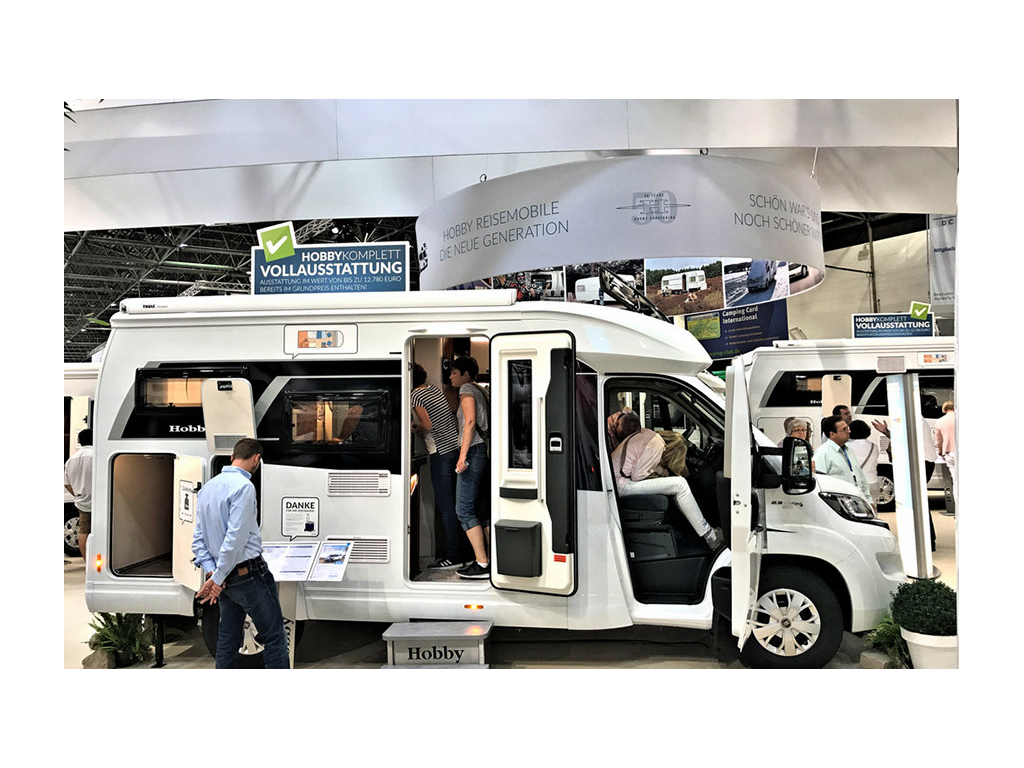 Ultra-compact Class Cs are common in Europe, though they were unheard of in the U.S. back in 2017. They’re around the same footprint as a campervan and have gear garages (sound familiar?). This type of RV makes perfect sense in Europe, since European RVers tend to be working families who mostly RV on weekends and need the garage to transport their bikes and scooters. They also need the RV itself to be small and light to meet with strict rules and regulations (and many narrow roads).

When James and I saw the ultra-compact Cs at the show, we were love-struck. “What sort of wonderful RV awesomeness is THIS, Russ?!? Why don’t we have these in the U.S.?!?” He explained it was already on their long-range plan, but there were a couple obstacles: a) through their research, an ultra-compact C was unproven in the U.S., and b) other projects had been taking priority. We spent the day checking out the ultra-compact European rigs with gear garages, getting more dazzled with each one we saw. It seemed Russ was paying more attention to them, too. 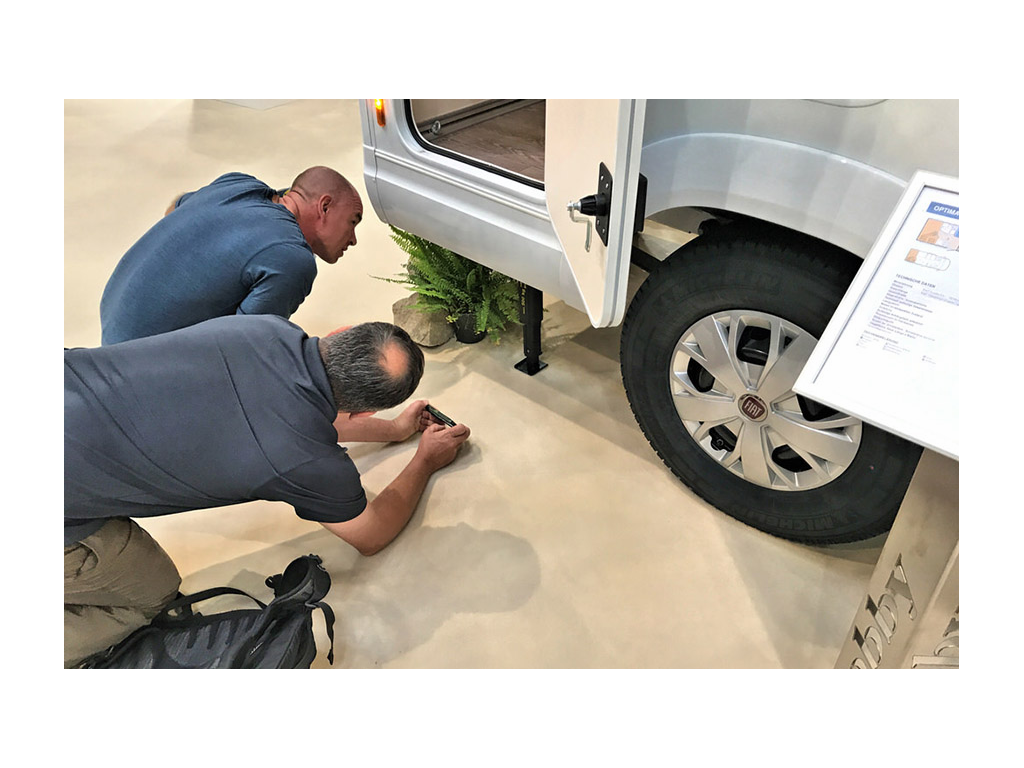 James and Russ checking out a compact RV at Caravan Salon 2017.

We didn’t know at the time, but our excitement was timed perfectly, as Russ’ team was already kicking around some ideas about how they might use the future 2020 all-wheel drive Transit that they’d learned about from Ford. Between the news from Ford and the Dusseldorf inspiration, Russ got the team to rally around the concept of an ultra-compact Class C with a gear garage. The EKKO was officially underway.

When Winnebago gets an idea for a new model - any model - it takes research time before formally making it into the New Product Development queue. I recently interviewed Russ Garfin about the research that went into developing the EKKO. Russ explained it took an amazing team effort to research this idea and make the EKKO become a reality.

These are the five main research areas they pursued:

1. The core product team monitored (and continue to monitor) all the RV-related social media groups.

They tapped into van owner groups, Class C groups, and even general RVing groups. Since the team knew they wanted to make the EKKO a boondocking rock star, they put a lot of their focus on feedback from RVers whose camping style is more ‘off the grid.’

As an example, one takeaway from van owner groups was that many vanlifers are interested in the same things: the ability to RV to remote destinations, in all seasons, and in rigs that allow them to be self-sufficient as long as possible. Van owners also tend to haul gear for their active pursuits.

But in a van, meeting all these design goals at once is difficult. A van has metal, ribbed walls which will always pose limitations on how well any van can be insulated. There’s also no way to efficiently cut exterior storage compartments in a van. And with limited space in a van, things like larger holding tanks are difficult. The team took all the Class B limitations and addressed them in the EKKO. The weaknesses of Class B vans became the EKKO’s strengths. 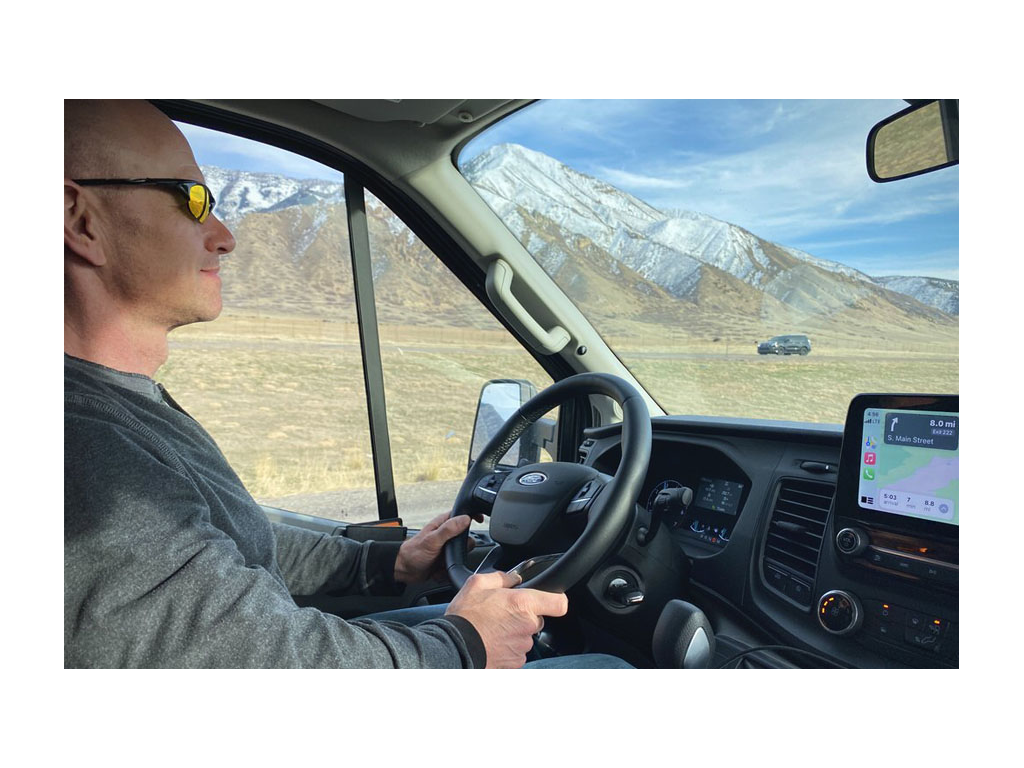 If you saw Winnebago at any RV event you attended in the past few years and you talked to them, even in an informal capacity, it’s quite possible your feedback was noted and included in the EKKO development.

As an example, the team took this input from owners of other Winnebago-based Class Cs: 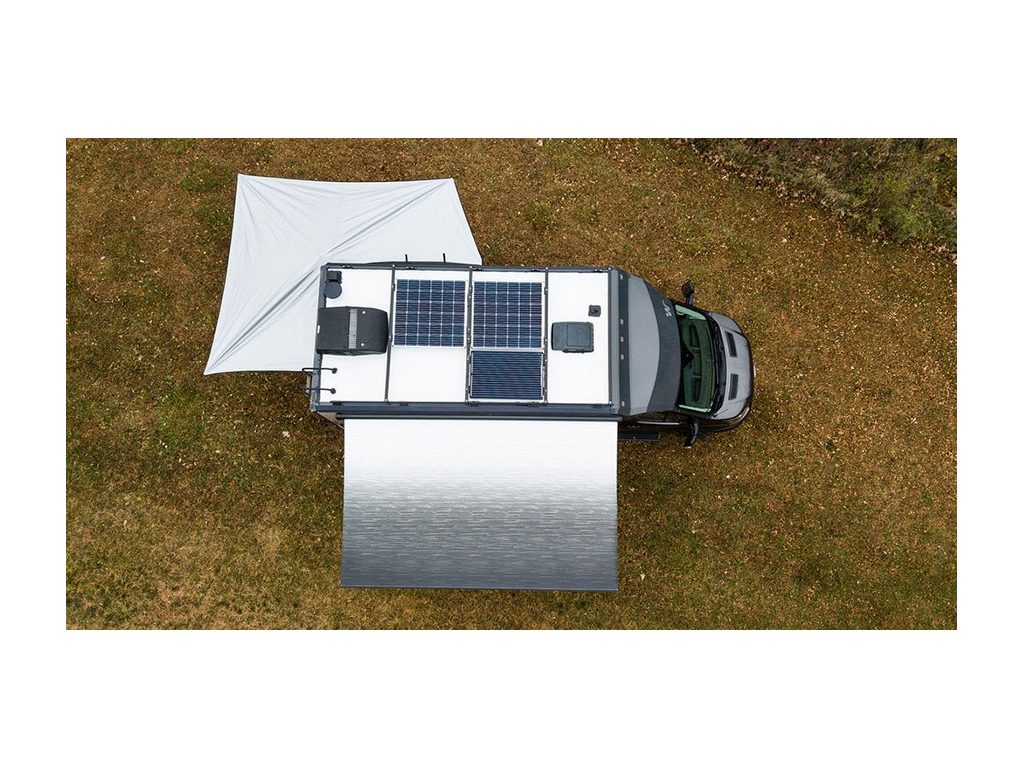 3. The team pulled info from warranty issues and repairs on their current Class B and C coaches.

To minimize the time owners might have to spend at RV service departments, the team researched the most common things that go wrong in RVs, and then put strategies in place so those things won’t happen with the EKKO.

All these things added cost to the EKKO, but as Russ explained, “it’s important for us that our owners get the better performance, so the higher cost will pay off in years of trouble-free, reliable function.” 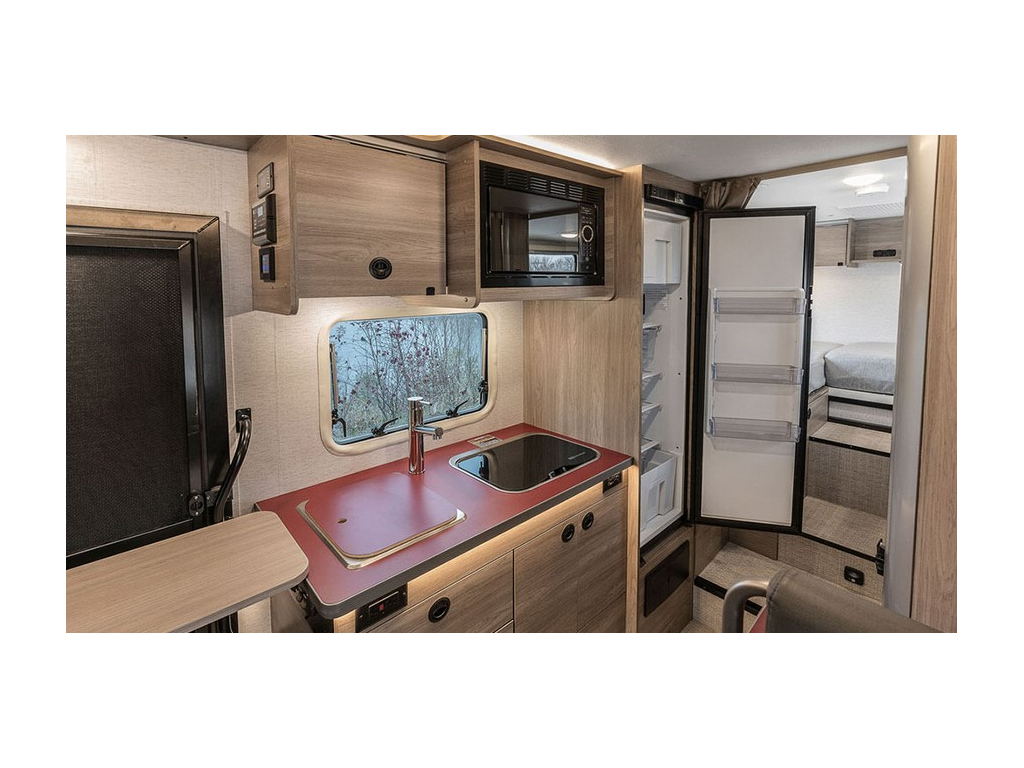 4. They studied proven designs from previous Winnebago Class B and C products.

When it came time to work out the details, the team researched RV designs looking at mechanicals and construction schematics.

“The actual construction and mechanics of building the EKKO aren’t revolutionary themselves,” said Russ, “all the important stuff in the EKKO is tried and true. Our team is experienced at building RVs, and it shows in how our products evolve, with the EKKO being a good example of that. We took all the best of what we’ve learned from our other products and put that into the EKKO.”

For example, the heavy-duty aluminum extrusions that surround the body are made in-house at Winnebago. Their experience with aluminum extrusion allows them to design many other purpose-built components, too, such as shelf edging or door stiffeners, as well as their interlocking wall structure.

“We also have over 60 years of experience with stamping, forming, and corrosion protecting the steel components that beef up the superstructure of the EKKO,” said Russ. “EKKO buyers can be confident that the structure in their EKKO will hold up and secure their investment.” 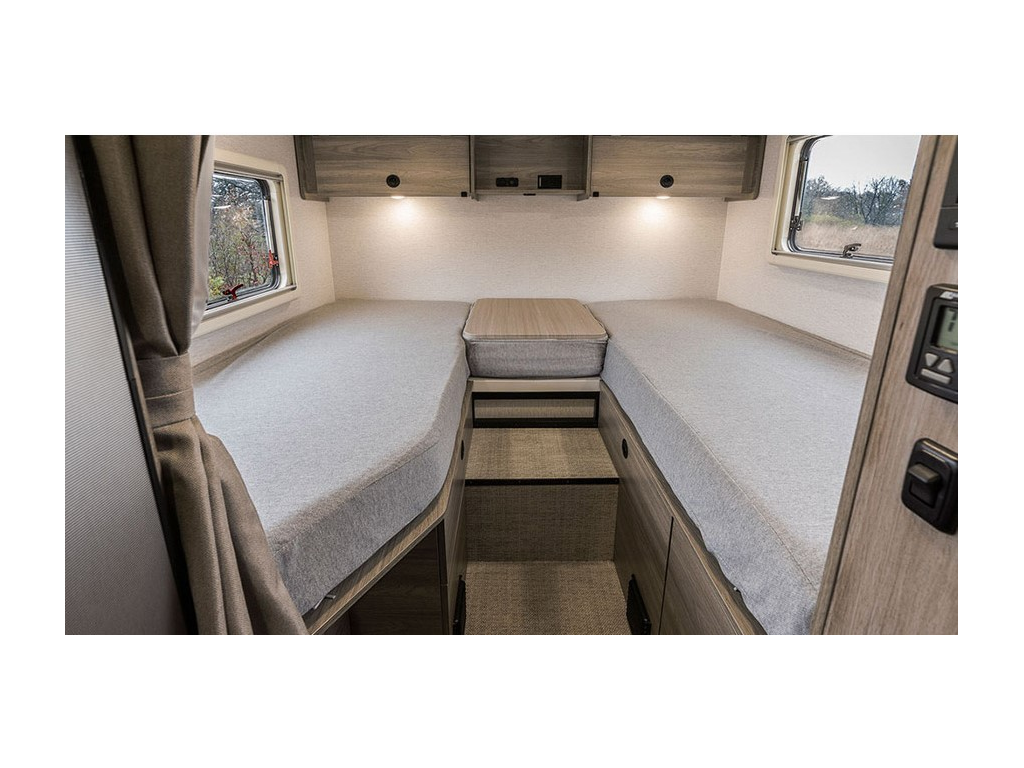 Russ fully gives credit for the clever bathroom in the EKKO 22A to European design. The pivoting shower wall was engineered in cooperation with one of Winnebago’s European suppliers. They designed the pivoting wall using a relatively new composite that was introduced at the Dusseldorf show in recent years… technology that’s not yet available in the U.S. It is completely waterproof and won’t warp or flex. The team also studied the footprint of the European compact coaches as they trimmed the EKKO down to its unusual (for the U.S.) ultra-compact size. 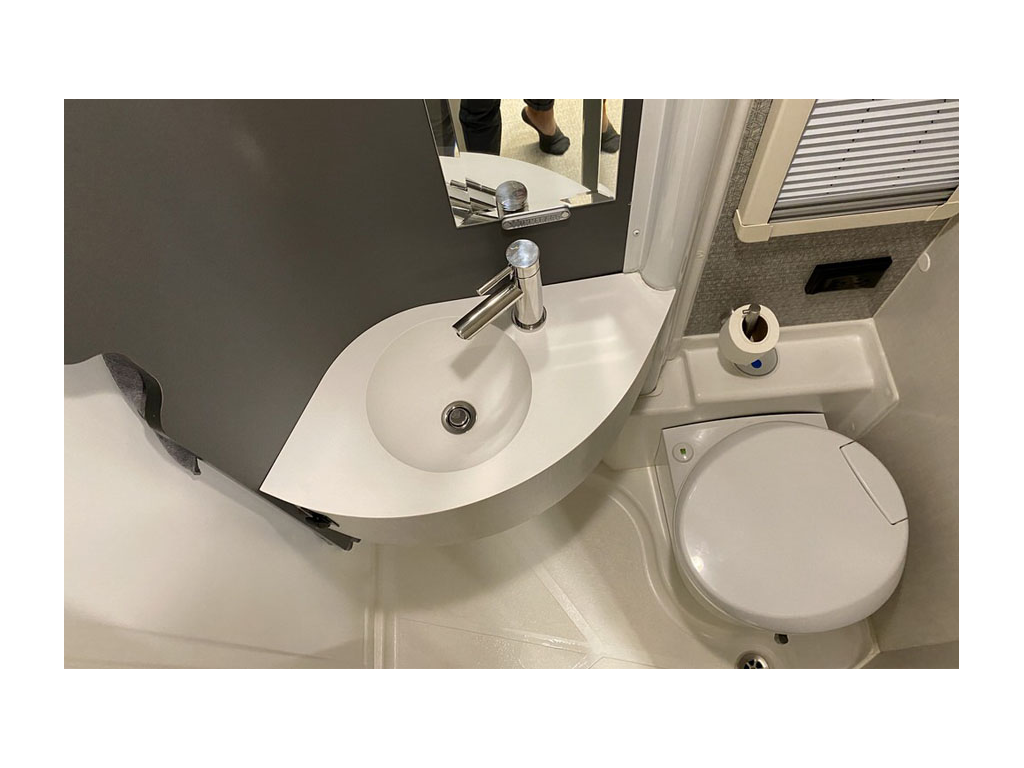 And Now Back to Our Part in the EKKO Story …

At that same Dusseldorf show in 2017, James and I filmed some YouTube videos sharing the ultra-compact European RVs and discussing how perfect we thought they’d be for us… if only we had them in North America. We’ve been talking about them ever since, and if you follow us you’ve probably heard about our dream “C minus” RV before.

We hoped getting others excited about ultra-compacts would keep it on Winnebago’s radar as a priority project. Back in the beginning, Russ had been quick to caution us that researching new concepts happens all the time, but doesn’t always lead to a final product. So, we knew just James and I alone didn’t have the power to nudge Winnebago into making it real. We needed all of you telling them, too.

And then this fall, we got word. They made it happen. It was real! 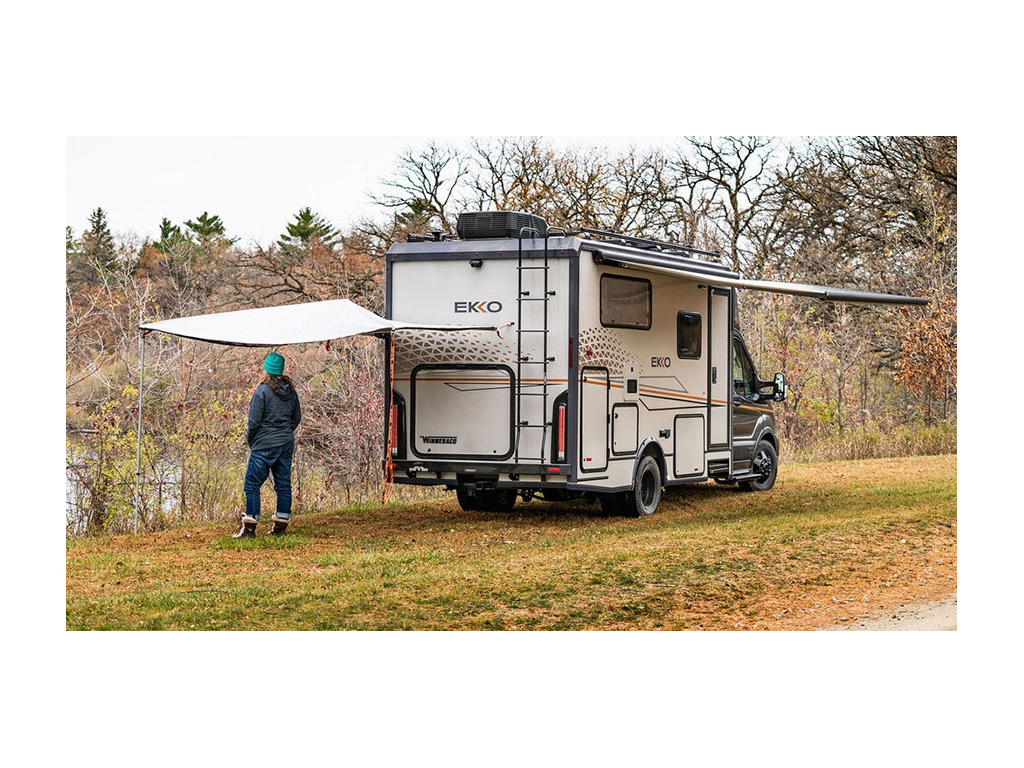 For years, it was just this idea, a fun thing to dream and chat about. Seeing it go from that tiny seed of an idea in Dusseldorf to an actual real RV gives me a special affinity for it, like it’s got a little part of me in it. But, really, I know it’s not just me! It’s got a part of so many of you, too. The EKKO is a 3+ year amalgamation of the best suggestions from you, me, social media groups, RV meetups, lessons learned from past RVs, and European design. And let’s give the core EKKO team some credit, too! After all, they’re the rock stars who spent the past few years of their lives creating this awesome RV. 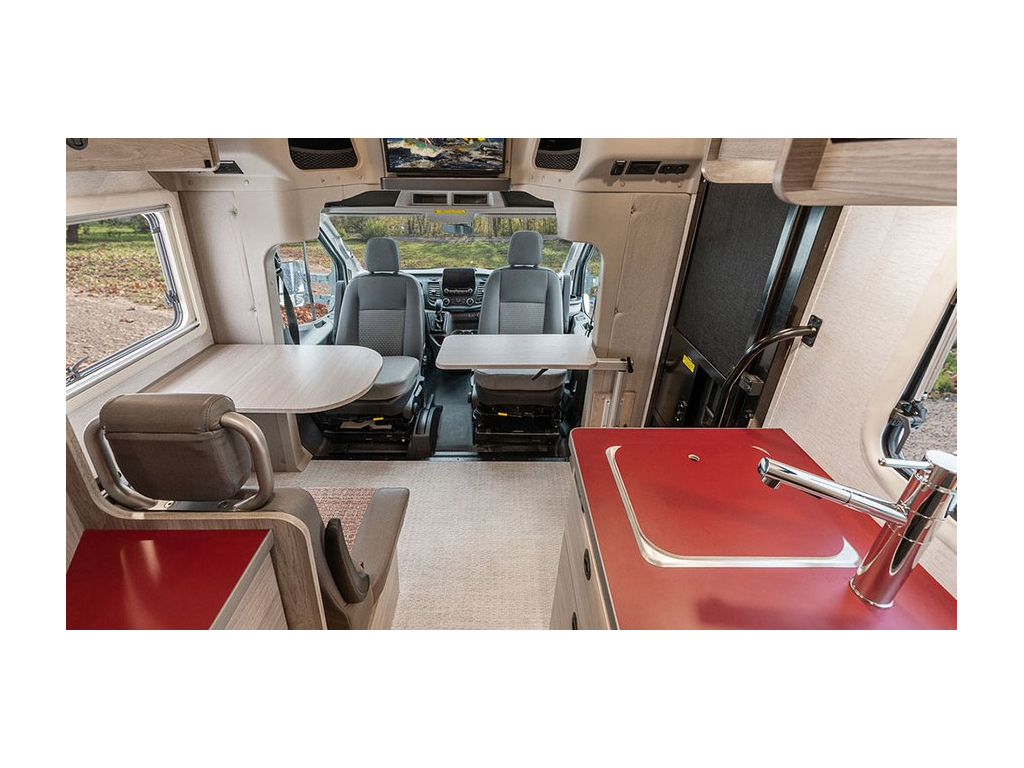 We’re still many weeks out from getting our new EKKO, but it’s hard to think about anything else right now. If you’d like to learn more about the EKKO, feel free to come join us in the Winnebago EKKO Owners and Wannabes group on Facebook!

User commented on June 6, 2021 11:53 AM
The EKKO appears to address many of the challenges of true four-season RV motoring, certainly more so than other "claimed" four-season RVs. It is probably impossible to make ANY Class B/C meet "ALL" a customer's needs. My thinking is Winnebago took many measures and thought out many issues to try to put together a unit that could address many of the more serious challenges posed by the outdoors - namely very cold winter weather and very hot summer weather. There are other true four-season RVs made in Germany and America that will cost five to eight times the cost of an EKKO, and are very expensive to run and maintain. From what I can see, I think Winnebago has put together a winning formula here and I'm very intrigued by this new addition to the Winnebago fleet.
User commented on June 29, 2021 10:19 AM
Where can I see a non prototype EKKO to see if I really do want to order one? Thank you in advance!, Per