Picking a Family-Friendly Vehicle to Tow a Travel Trailer

We have been traveling full-time since May 2014, but this is our first time with a trailer. In the past we had a diesel pusher 39-foot motorhome and a 23-foot Class C. But until our recent purchase of a Micro Minnie travel trailer, we had never experienced the world of towable RVs before!

Buying the right tow vehicle for your trailer is a process in itself, but with a little research and due diligence, you should be able to find the right fit. I would also err on the side of doing your own research on the vehicle's tow weight and carry capacity and the trailer's. I wish we could say just ask the dealer, but that is not always the case.

Instead, you need to become the expert in what you are looking for and you need to do your own research and go into the dealers with this knowledge, so you can ask the right questions and verify that you are actually getting what you need. We almost bought the wrong van because we figured they wouldn't show us one with the 4.8L. But they did, and just thought it was the right one. Luckily, we double checked and didn't make the wrong purchase. 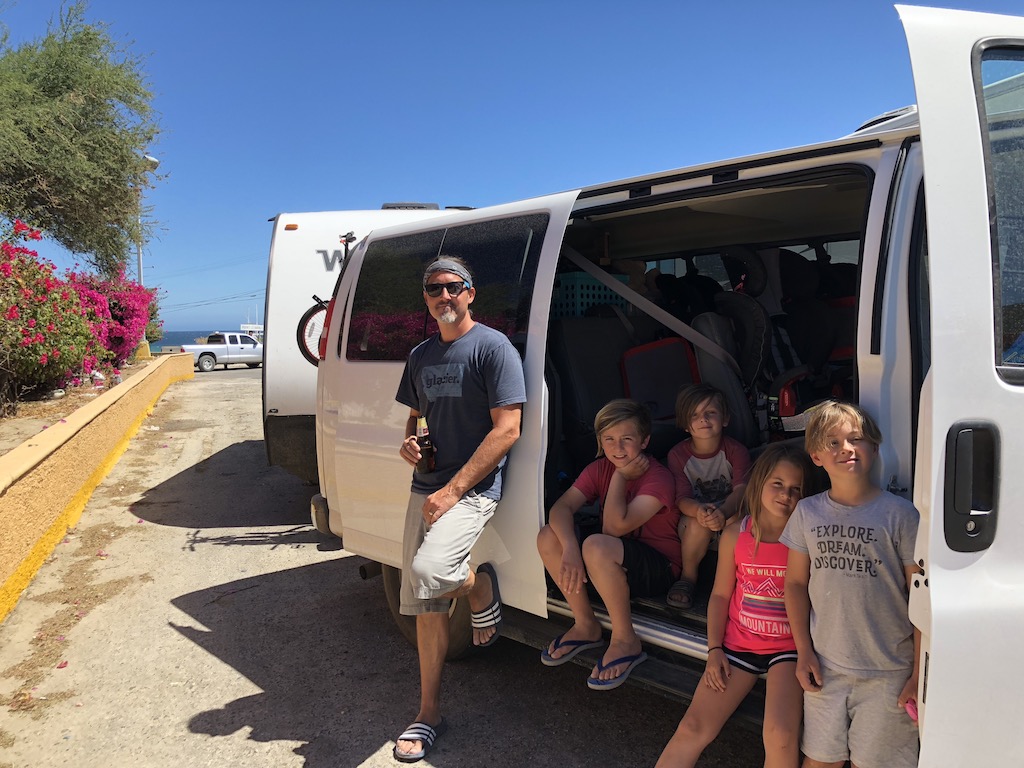 How we decided on a tow vehicle

Ruling out a pick-up truck

Four kids and a dog is not the best setup for a pick-up truck. There just isn't enough room in the cab for everyone to fit comfortably. Could we have made it work? I am sure we could have, but we thought a van would be a better fit for our family.

With a van we would also be able to remove a row of seats and build storage out in the back (trailers don't have that much storage in them and we knew we were going to need more). It also meant we could put a camper toilet in the van for bathroom emergencies on the road (something I was concerned about with kids and the long road trips we take).

When we knew we were going with a towable we knew we had to put some good thought into the vehicle that would tow it. Part of the reason we left the Class C was we were just too heavy for it. We didn't want that to be an issue again. That being the case, weight and what the tow vehicle could handle was a huge factor for us.

Then we assessed the weight in the van. As a family, we weight just under 700lbs and then there was all of our storage stuff in the van. We had an idea of what all our stuff weighed from going through the weight issues before and weighing multiple times with the View. So, we took that and doubled it for good measure! 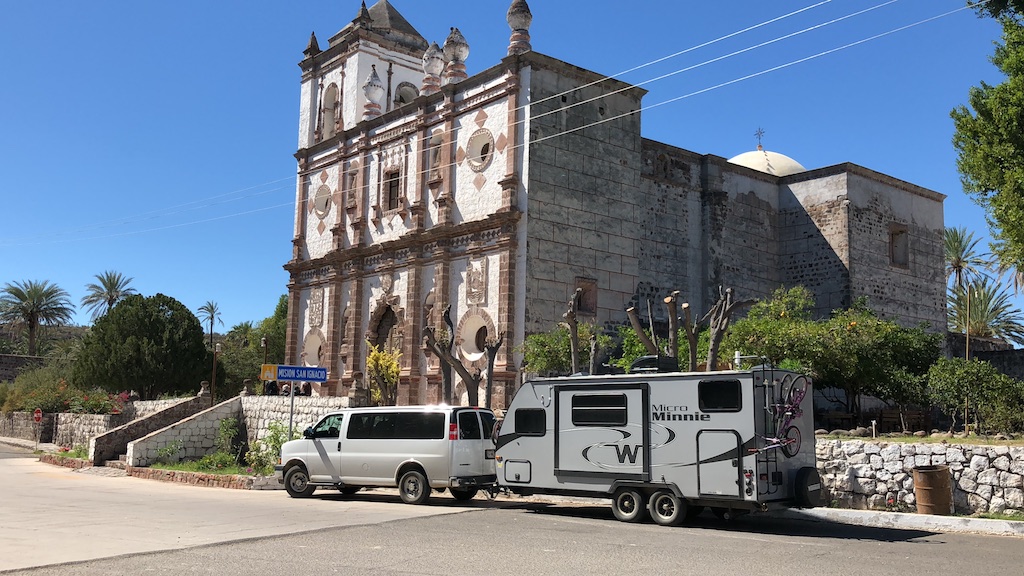 Deciding between a 12 vs. 15 passenger van

Now that we settled on getting a van, we had to decide between a 12 passenger and 15 passenger. The 15-passenger made sense for the space, but we decided to go with the 12 passenger for ease of traveling and for ease of driving it around town since it would be our only vehicle.

Also note if you decide to go with a 15 passenger, you will want to make sure it is a newer one with the wheel base in the right location. When they first came out with the 15 passenger, they didn't move the wheels, but just added another row to the rear of the van and this is a safety hazard. They have since lengthened the wheel base on newer models.

Which 12 passenger van to get?! My husband did some research and we decided to check out the Chevy Express 3500 with the BIG engine. We didn't want weight or power to be an issue.

We found what we thought was the one, but then found out it had the smaller 4.8L engine which meant it could tow less weight and from reading the forums, seemed to bog down when going uphill while pulling a load. We love the mountains and didn't want any part of that. Instead we wanted the 6.0L which could tow just under 10,000lbs.

Luckily, our local dealer was able to find a Chevy Express 3500 6.0L at the auction and brought it back for us to check out. This was the one! We bought it and headed home to get it ready and find the trailer.

Putting it all together

The Winnebago Micro Minnie 2100BH travel trailer came in at 3,760lbs dry and could hold up to 7,000 pounds max. The vans we were looking at could tow 9,600lbs and had a gross combined capacity (weight of van, plus weight of trailer) of 16,000lbs. We wanted the van that left us room - not one we had to worry about weight. 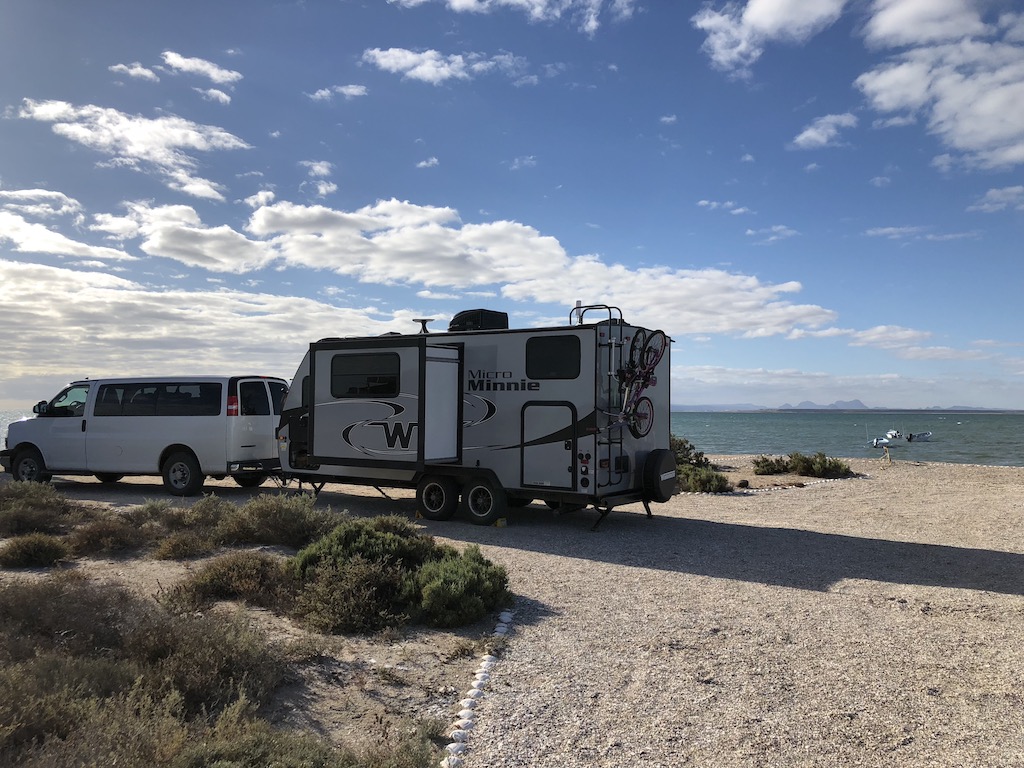 We think we have the right combination: The Chevy Express 3500 and the Micro Minnie 2100BH trailer. My husband did his research and we knew what we needed for our family. The really fun part came when we had one week to get everything together, so we could get out of the freezing cold of Wisconsin and start heading to Baja, Mexico!