Why a Family of 6 Chose a Micro Minnie Travel Trailer

We have never had a trailer before and never really thought we would get one. We always thought we would be a motorhome family. But here we are a family of six, plus our dog Indy, in the Winnebago Micro Minnie 2100BH, a 21-foot travel trailer!

We started with a large 39-foot diesel pusher motorhome when we first got on the road in 2014. It had four slide-outs and was huge. It was a great rig for transitioning into full-time travel. However, we only really enjoyed it once we got somewhere (assuming they had a site that could fit us). But it was not so great when we were trying to travel and wanted to be able to make random stops.

This led us to purchase a 2006 used Winnebago View. That got us to 23 feet. It was great for traveling around, but we quickly realized we were just too heavy for it. Not that we didn't fit. Surprisingly, we were able to configure things to fit in there pretty nicely.

We added a double bunk on top of the full bed in the corner and then that left the dinette and the bed above the cab. Don't get me wrong, it was tight. But we always try to travel to places where we can be outside, so combining the inside space with outside living worked well for us.

The problem was, when you add up all of our body weights (even if I lost 30 pounds!) and the weight of the things we wanted to bring along, we were just too heavy. That being the case, we knew we needed to make a switch to something else.

At this point we were due for a new car since our current one was over 10 years old and had over 115,000 miles on it. It was great for when we were traveling, but we were starting to feel it wasn't going to last much longer.

Add that on to the fact we wanted a new rig and it just seemed to make sense to get a car/van that could tow a new trailer. We started to ask, would a trailer work for us? 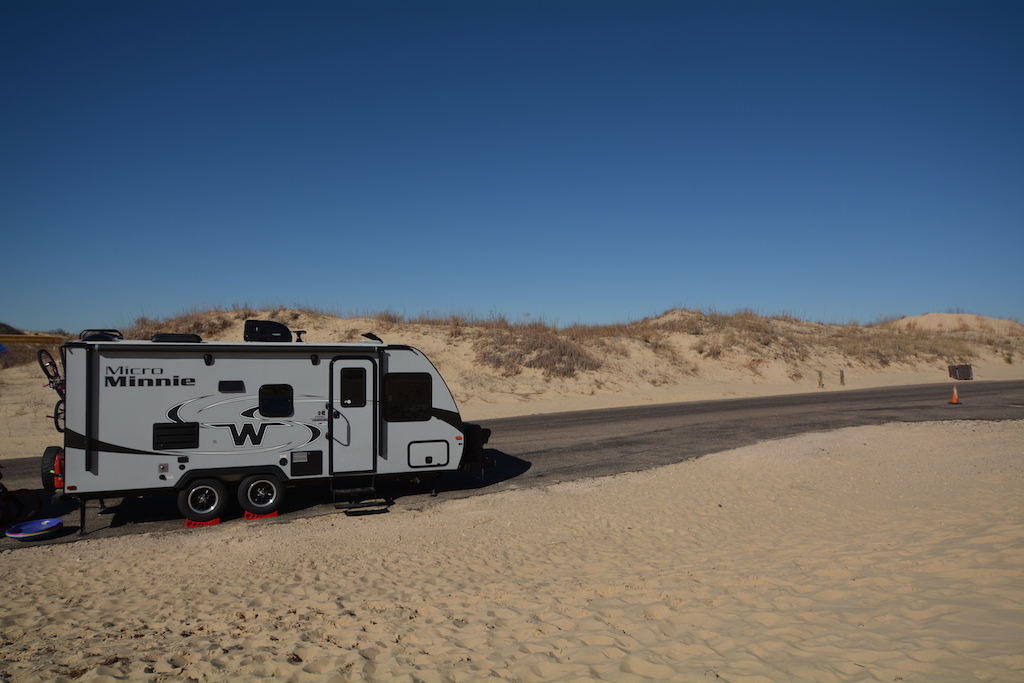 We started looking around and found the Micro Minnie 2100BH at i94 RV -- a dealership right by our hometown in Kenosha, WI, where we were staying for a few months. It was great to be able to walk through one and the sales staff was awesome about answering our questions. We knew we could make it work. The two bunks in the back were great for two of the kids and then the other two could sleep on the dinette/bed. And Craig and I have a full bed in the front.

Finding the Right Vehicle to Tow It

Now what to get to pull it. The trailer is pretty light coming in under 4,000 lbs with a load capacity of 7,000 lbs, so we knew we wanted something that could tow the max 7,000 lbs. We weren't interested in a pickup truck since that would be tight for six people and a dog. Instead, we started to look at 12 and 15 passenger vans.

Our long-term goal is to build a van out into a camper van. So, if we wanted to do a little more back-country exploring or camping, we had that option with a van. We found the 3500 Chevy Express and saw that one of them had a towing capacity of almost 10,000 lbs. Perfect!

After dealing with the weight issues with the View, we were happy to go overboard this time around. We test drove a 15 passenger and then a 12 passenger and even though the 15 passenger gave us more room for a van build out and storage, the 12 passenger was much better for getting around town. Since this was going to be our only car it made sense to go with the 12. 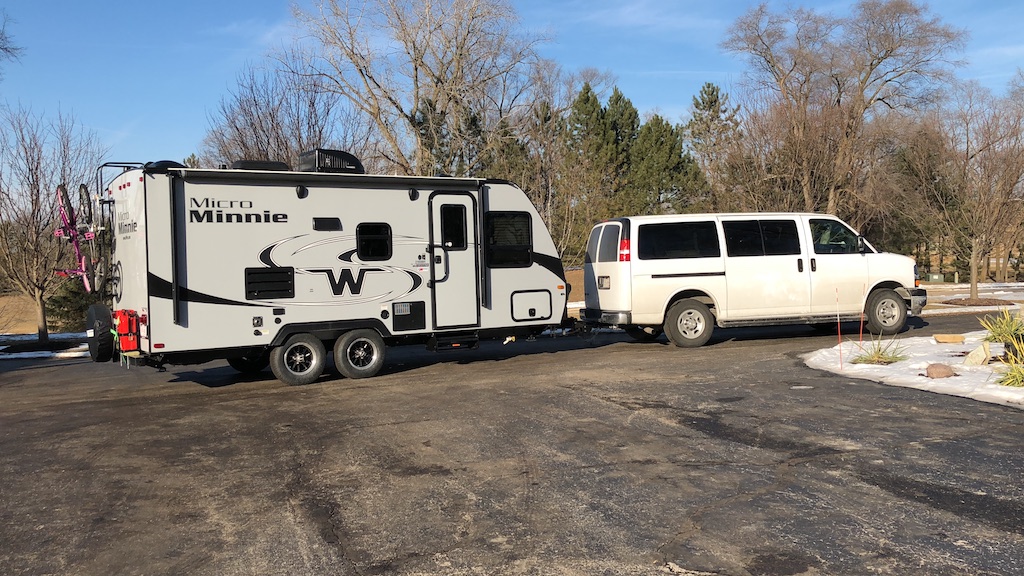 Putting It All Together

We bought the van first and took out the back row of seats and Craig built some shelves back there, so we had somewhere to store things. Since the trailer doesn't have much for storage, the van gives us the extra needed space.

We then traded in our View for the trailer. Craig has never really towed anything before, but with the trailer being a double axle and the no-sway hitch we got, he said he can barely feel it!

We still have a lot to learn and figuring out how to set things up in the trailer, so nothing falls when traveling, will be a work in progress. But we are getting there. The kids have a lot more space to spread out now -- they are two per bench right now. And our dog Indy has a spot snuggled in right in between Craig and I. Plus, the van has a plug upfront -- perfect for charging my computer while I am working while traveling. We also got a camp toilet that we put in the back of the van -- just in case someone can't hold it while we are driving down the road!

Time will tell if we like this setup better than a motorhome, but it is kind of fun to experience all these different ways of living and traveling full time! 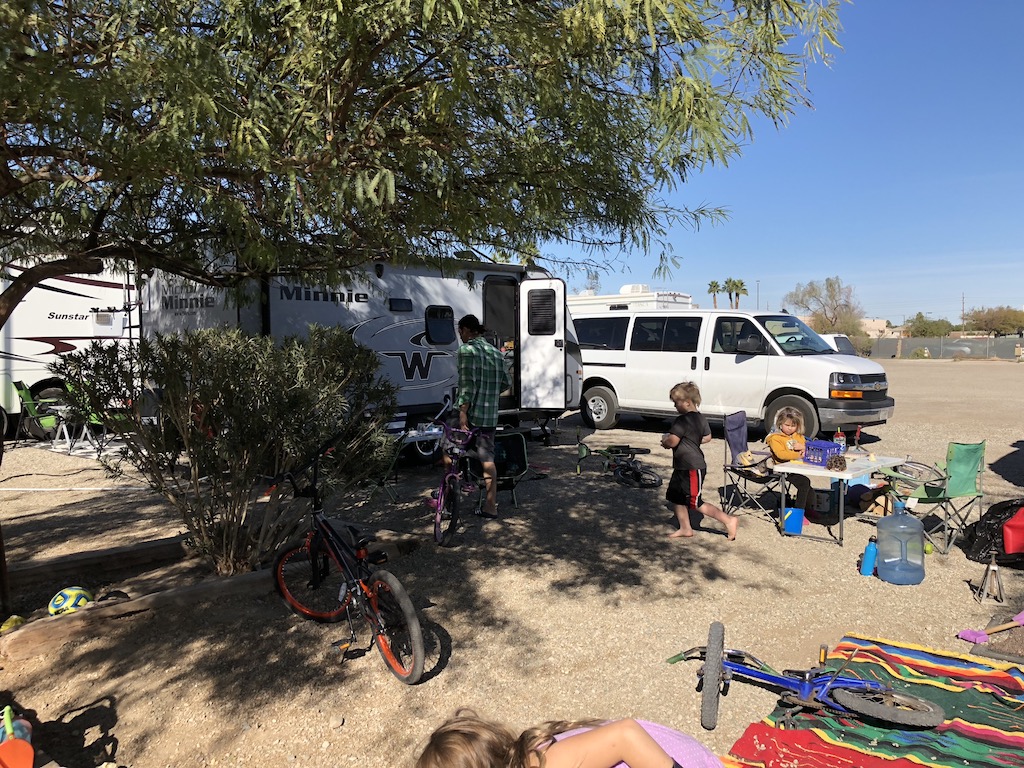 For now, we tested the combination out by driving 2,500 miles from Wisconsin to California and just crossed over the border into Baja, Mexico. We plan to spend three months exploring Baja before going up the California coast. You can follow along on our journey through Baja on Facebook and Instagram, @crazyfamilyadventure.