Winnie the View Heads to the Big Apple

Our family loves to kayak. It really doesn't matter whether it is in the ocean, a lake, or a raging river, if we are in our boats, we are pretty happy. In fact, it was that hunger for adventure on the water, that prompted us to sell our home and move into a Winnebago View, otherwise known as Winnie the View, so that we could spend an entire year together as a family on the water. As we started to map out our journey, the majority of our planning efforts were spent researching rivers and wild and scenic places across North America. After months of brainstorming and plotting our course, we realized that a year was not going to be enough time to explore all of the places on our list. We had to substantially consolidate our list of adventures and prioritize our destinations to fit into our 365 day timeframe. We sat down as a family at the kitchen table and each listed our top priorities for the year so that all of us had a voice in finalizing the plan. Peter wanted to spend time at the Ottawa River in Ontario, Canada kayaking huge whitewater rapids with the best paddlers in the world, I wanted to paddle throughout Florida and explore the Keys and Everglades, and Abby shocked us both with an announcement that she wanted to experience the Big Apple. It wasn't that we were opposed to spending time in a city, but the thought of navigating the streets of New York in a 24 foot RV with a trailer was pretty daunting. Nonetheless, it was the top of her list, so we agreed to make it happen. 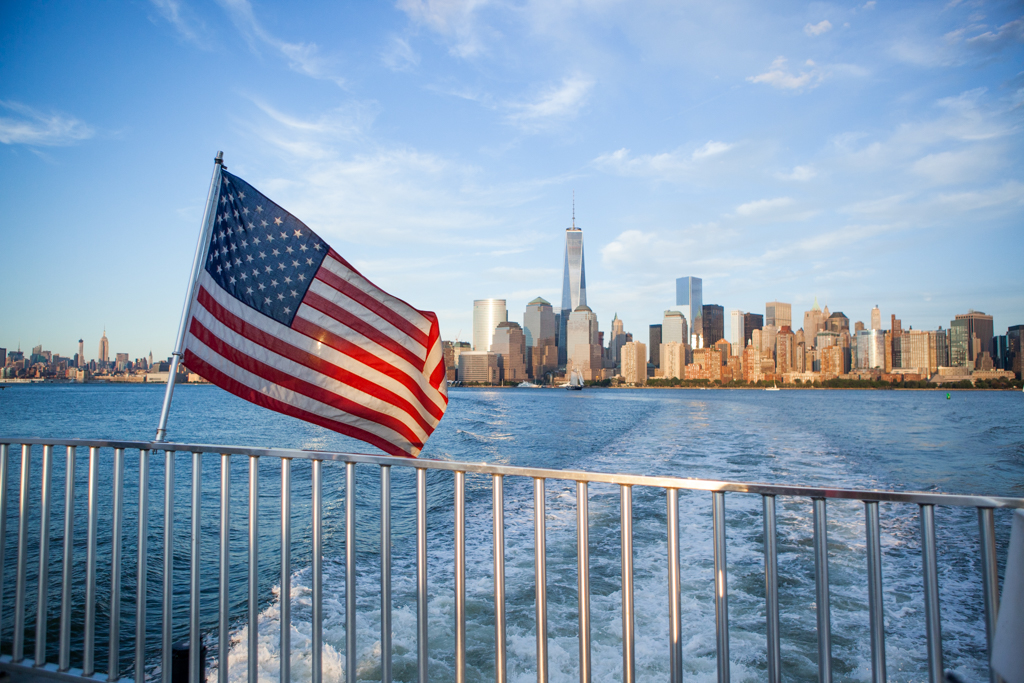 Three months, 14 states and 12,000 miles later, we found ourselves heading down the Eastern Seaboard, with NYC just over the horizon. A quick search of the internet, gave us two options for camping near Manhattan. Both Liberty Harbor RV Park and a Walmart were located just across the Hudson River in Jersey City, and from there it was a quick ferry ride into the City. We opted to save on camping fees by staying at Walmart so that we had a bigger budget for fun in the city. Besides we were planning on spending all our time in Manhattan, so we really just needed a place to park. Not having to drive in Manhattan was a big relief and the ferry turned out to be an experience in it's own right. We could see the Manhattan skyline from New Jersey, but as we crossed the river, the scale of the buildings increased exponentially. It was a dramatic grand entrance for our big city adventure. 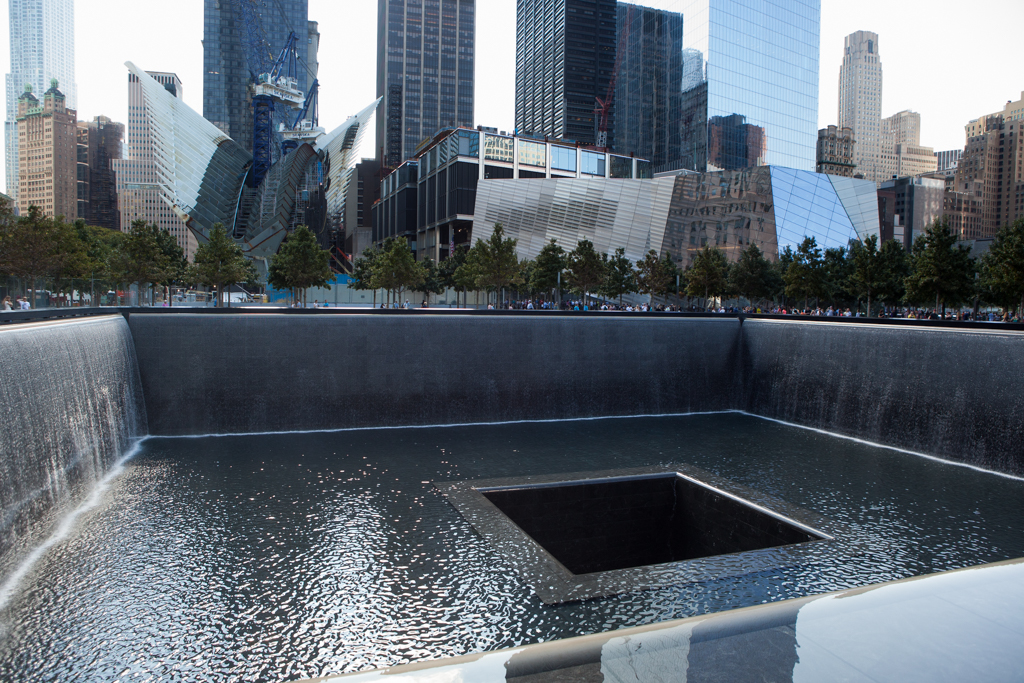 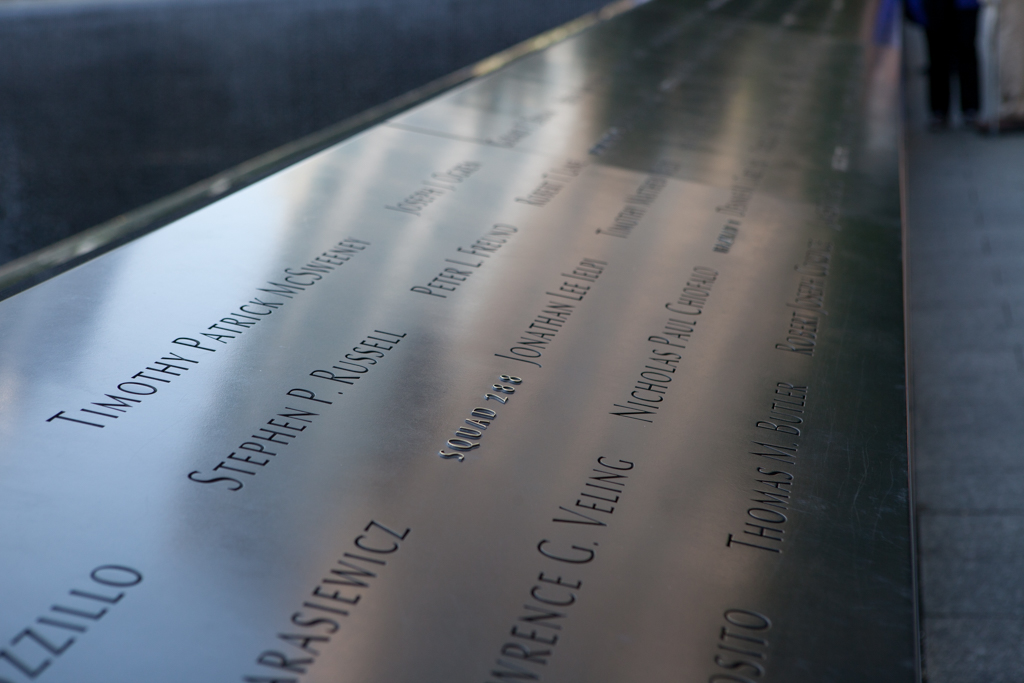 A quick half mile walk from the ferry terminal brought us to the 9/11 Memorial at ground zero. Although it was still under construction, it was a profoundly powerful lesson for Abby of the devastation and destruction of the terrorist attacks that happened several years before she was born. 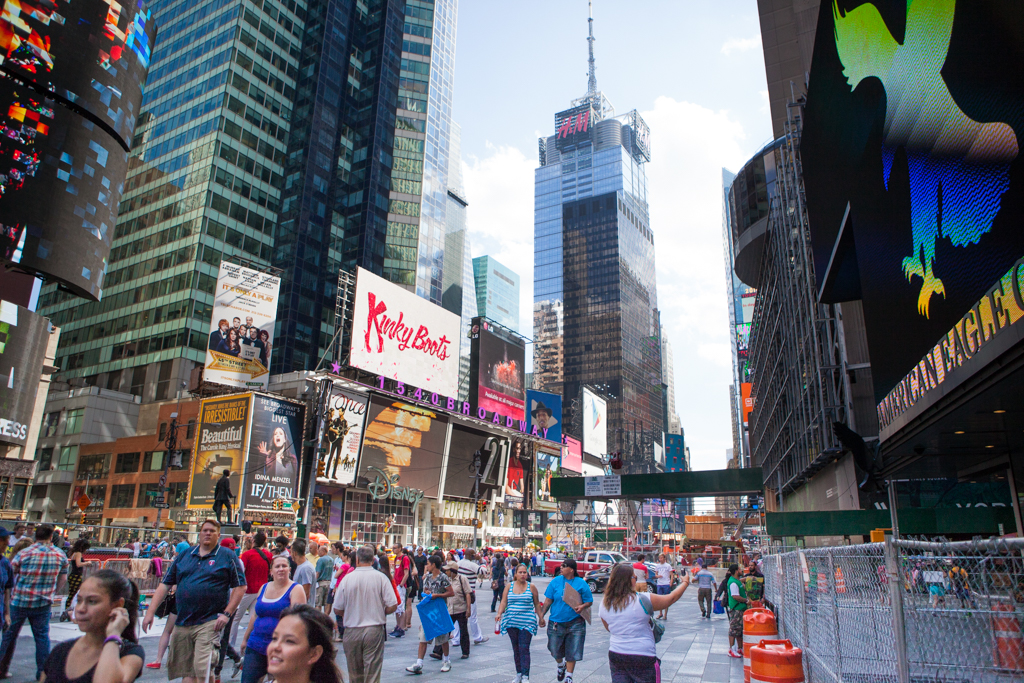 From the solemn and reverent Memorial, we ducked into the subway and in ten minutes resurfaced in the center of Times Square filled with bright lights and mayhem. We wandered along 5th Avenue looking in extravagant windows and exploring gothic cathedrals. We strolled through Central Park, shopped in FAO Schwartz and ate a hot dog from a street vendor. When it was time for dinner, Abby requested ravioli in Little Italy. We hopped on the subway in Times Square and this time found ourselves exiting the bowels of the city in the heart of Chinatown. Watching Abby take in the radical transformation of environments each time we emerged from the subway station was a definite highlight of our New York experience. 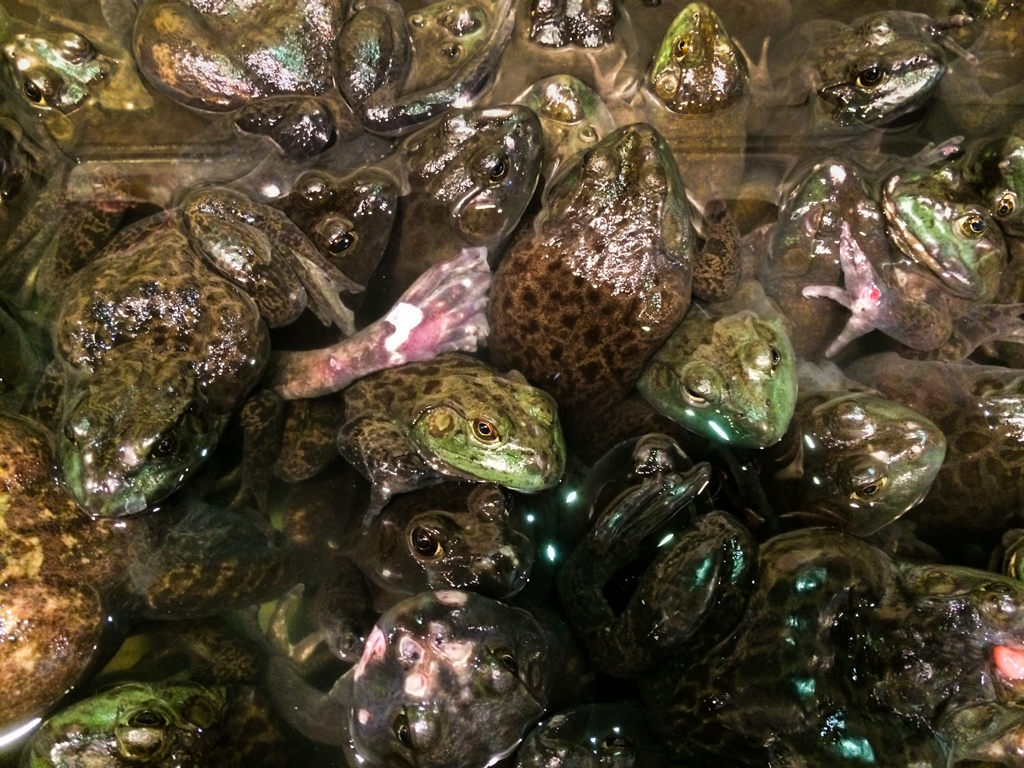 Chinatown proved to be fascinating. We wandered through markets stocked with strange foods, and strolled down alleys filled with street vendors that displayed everything from designer purses and sunglasses, to storefronts lined with walls of aquariums filled with lobsters, eels, sharks and other exotic creatures from the sea. 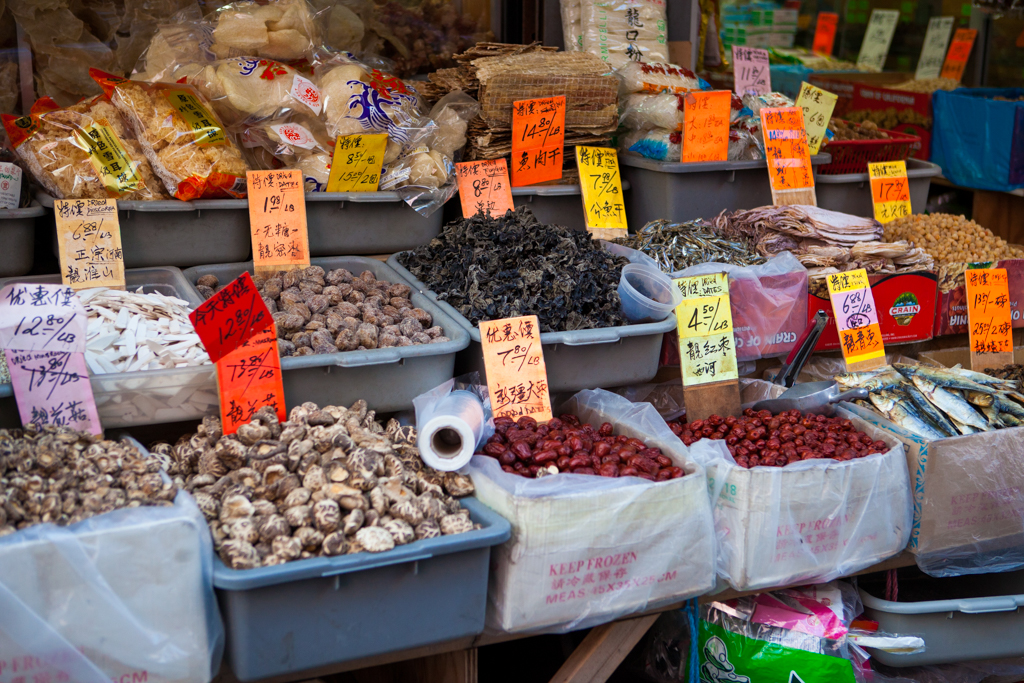 Within just a few blocks, we crossed an invisible line and were enveloped with the sweet aroma of bread and wine and handsome young men with thick accents inviting us into restaurants boasting the best food in New York - we had arrived in Little Italy. After a marvelous ravioli feast, we wandered back through the financial district to the terminal and boarded the ferry just as the sun began to set. As we pulled away from Manhattan, the buildings tuned to gold and the water filled with diamonds as the sun dropped below the horizon turning the sky a brilliant shade of red. And as spectacular as the sunset was, our eyes were drawn to a group of 8 kayakers paddling across the Hudson Bay at sunset. We all agreed to forget riding the double decker sightseeing tour bus the next day, we were going kayaking, AROUND THE STATUE OF LIBERTY! (You can watch the video by clicking here) 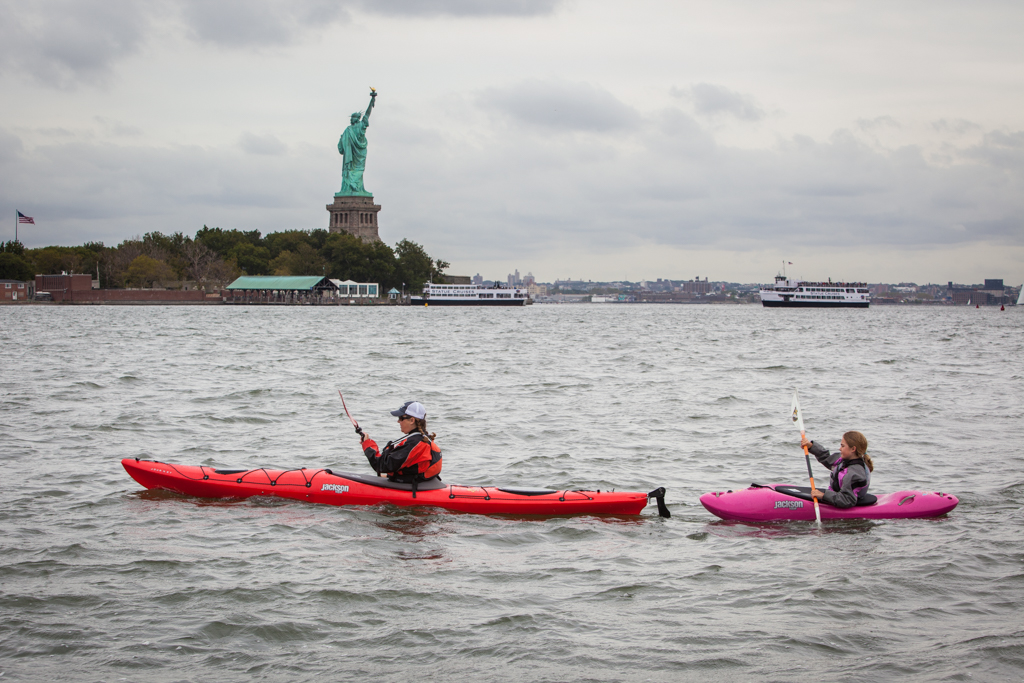 The next morning, we woke to wind and cloudy skies, but decided that it was probably still reasonable weather for paddling. We drove to a nearby boat ramp and quickly readied our gear under the watchful eye of several skeptical fisherman. I am not sure if they were more concerned for our safety or our sanity as we launched into the choppy water for a kayaking excursion in the Hudson Bay. We paddled toward the main channel where we faced waves from the ferry boats that seemed to grow larger with every paddle stroke. The wind bit at our faces and stung our eyes as it sprayed us with a fine mist of saltwater as we emerged from the shelter of the bay. As I followed Abby's 14 foot kayak into the shipping lanes, I watched her vanish deep into the trough of the wakes generated by the passing freighters and ferries only to reappear on the crest of the next wave. We suddenly seemed very, very small in scale next to the giant cargo ships coming to and from the Port of New York. Once I calibrated my brain to the scale and hustle-bustle nature of the harbor, I realized that kayaking was an incredible opportunity for a rare glimpse into the magnitude and importance of the Port of New York. The views of the Statue of Liberty were pretty cool too. 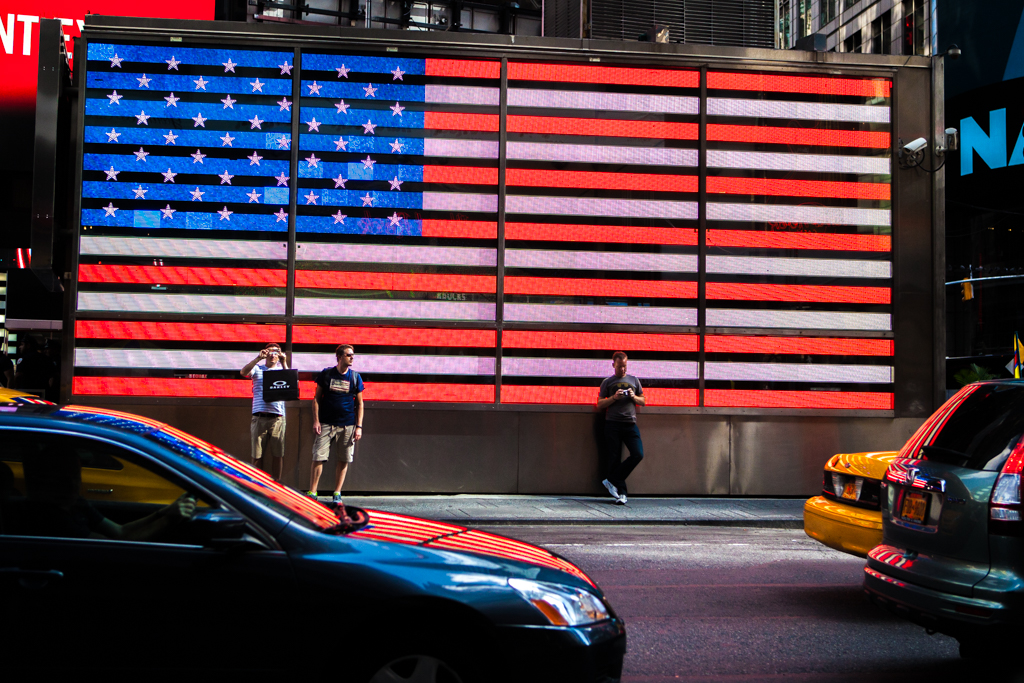 On our last day in the City, we enjoyed an evening on Broadway where we saw a fabulous performance of Wicked. We ended the night with a stop in a nearby deli for some authentic New York cheesecake before boarding the subway and bidding adieu to the city. We found the Times Square Subway Station to be as busy at 10 PM as it was at noon, and the character of it's clientele was as vibrant as the lights outside. As our train made it's way downtown, the crowds began to diminish at each stop until finally we were the only people remaining. I looked into the adjacent cars and realized we were completely alone on the subway in New York. It was equally thrilling and terrifying at the same time. I mean, when are you ever completely alone in Manhattan? But at the same time I couldn't help but remember every single scary movie I have ever watched about New York, and they all start with someone completely alone in the wrong place.

The remaining 10 minutes it took to get to our stop seemed to take an eternity. Twice I am almost sure I could hear the scary music that plays right before something really bad happens in a movie. Finally the announcement for our stop echoed throughout our empty car and we emerged once again from the bowels of the city up into the financial district. 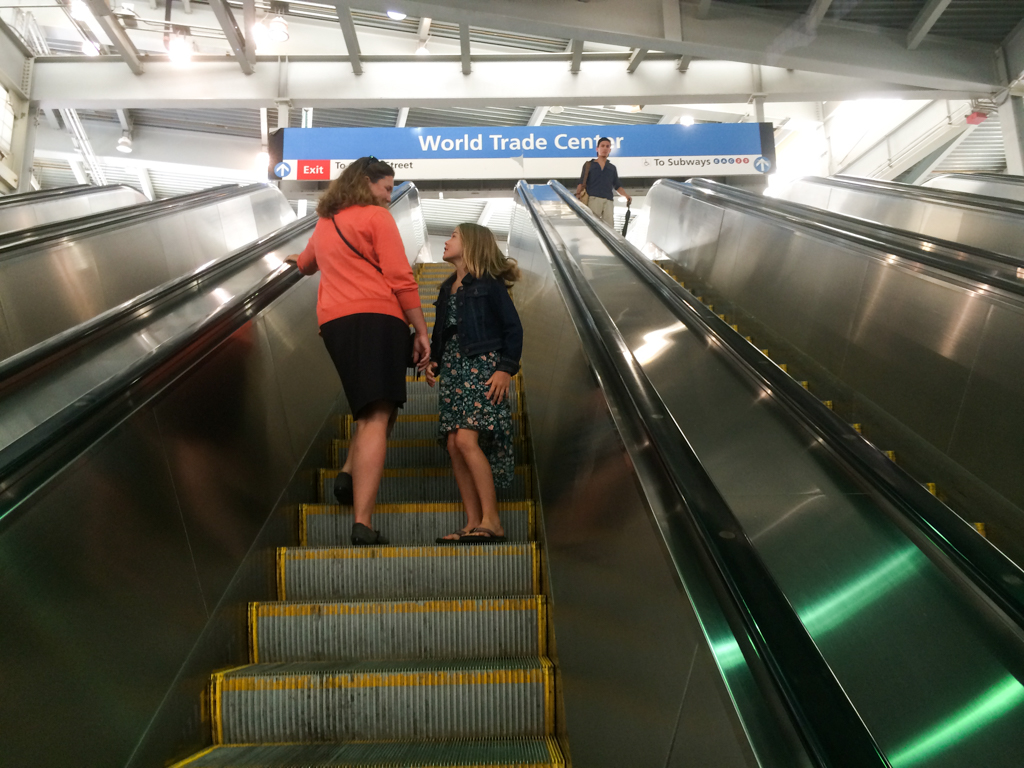 With the help of our iPhones, we quickly navigated the deserted streets back to the ferry terminal, but as we rounded the corner to the entrance, my heart leaped into my throat. The terminal was dark and the gates were locked up tight for the night - we had missed the boat. A thousand thoughts raced through my mind all at once. How much would a cab cost from New York to New Jersey? Where are all the cabs - we had been walking for 10 minutes and not passed a living soul. Are we safe? Where are all the people Now what? Fortunately for me, Peter is a man of action and was already leading us to a well lit street. We turned a corner and found a very nice hotel with a bell man outside. He was extremely helpful and recommended a private car service called Go Green that happened to have just dropped off a client and was waiting outside for his next fare. The driver was absolutely wonderful and took us all the way to our RV in Jersey City for only $36 - just a little more than the ferry cost.

With three days of adventures behind us we stumbled back into Winnie the View, tired, content and ready to crawl into the warm comfort of our own beds. Home sweet home never felt so good. Who knew that our time in the Big Apple would be so much fun. Thanks Abby for the great adventure.

(Learn more about the Holcombes by clicking here)