In geologic time fifty years is but a quarter of an eye blink, but on a human scale, it's the span from pre-teen photography buff to world wizened traveler. So while the slow drip of time had barely grown the speleological features of Carlsbad Caverns, this return visitor had added inches in both height and girth. But wait, I'm getting ahead of myself.

Our destination was Fredericksburg, Texas to attend the first RV Entrepreneur Summit. From Denver, it's not a particularly interesting drive so I studied the map for a more elegant way of descending south to avoid the dusty expanse of the Texas panhandle. From Colorado, a line through New Mexico seemed like the more scenic choice.

Our first stop was Santa Fe which is a frequent and favorite destination. For this particular trip, our tow car stayed behind and the strategy was to secure a hookup site at the Trailer Ranch RV park (55+) which is about five miles from the town's main plaza. Getting to and from the center of town was effortless using our Uber app (Lyft also operates in Santa Fe) and the trips were a very reasonable $12 dollars each way.

With all the great dining options Santa Fe had to offer we found ourselves in the mood for the warming comfort and spice of Mexican food at The Shed in Sena Plaza.

The Shed has been in business since 1953 and I was just a kid some fifty-five years ago when I had my first blue corn tortilla there. Beyond the large menu and ample servings, it's still a very affordable and popular restaurant. With a rabbit warren of dining rooms, it wasn't surprising that even on an off-off season Tuesday night the restaurant was packed by seven o'clock.

The next morning we pointed the Navion south to Alamogordo and White Sands National Monument. The National Monument is adjacent to Holloman Air Force Base and the missile test range. Shortly after you leave town there is a large sign advising drivers that there may be delays of 30 minutes or more during missile testing - the ultimate road hazard. My last trip here was as a teenager and I remember climbing up a virgin dune only to discover three dimes (with no footprints at all) glistening on the surface. 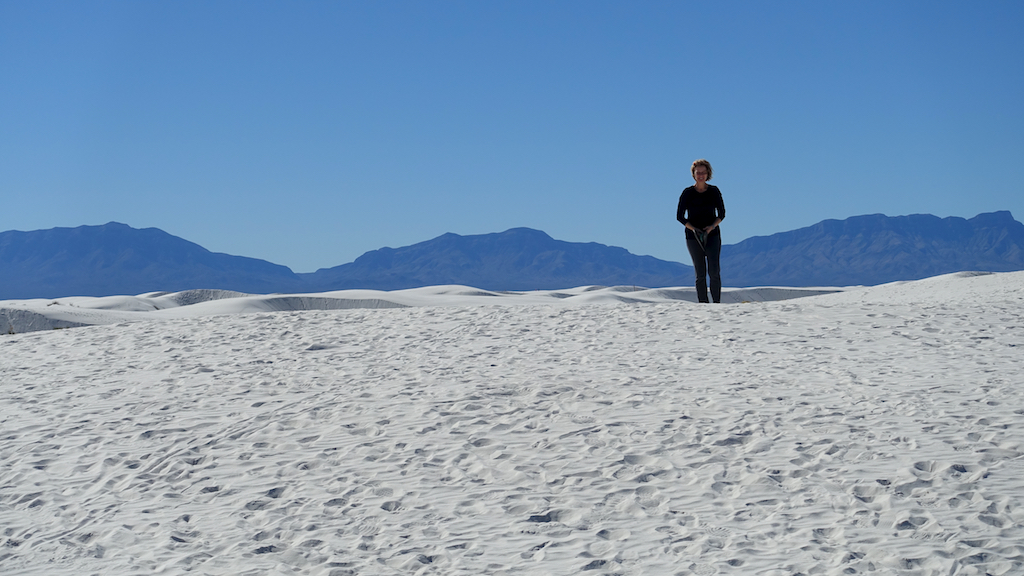 The dunes are made up of pure gypsum and are the largest of their kind in the world. As the pavement turned into a plowed white road through the dunes it was kind of freaky to see tire tracks and road plow rows as if you were driving in the middle of winter in the Colorado high country. But a different reality of the day was displayed on the dashboard of the Navion with a reading 74 degrees -- on an early afternoon in late February. 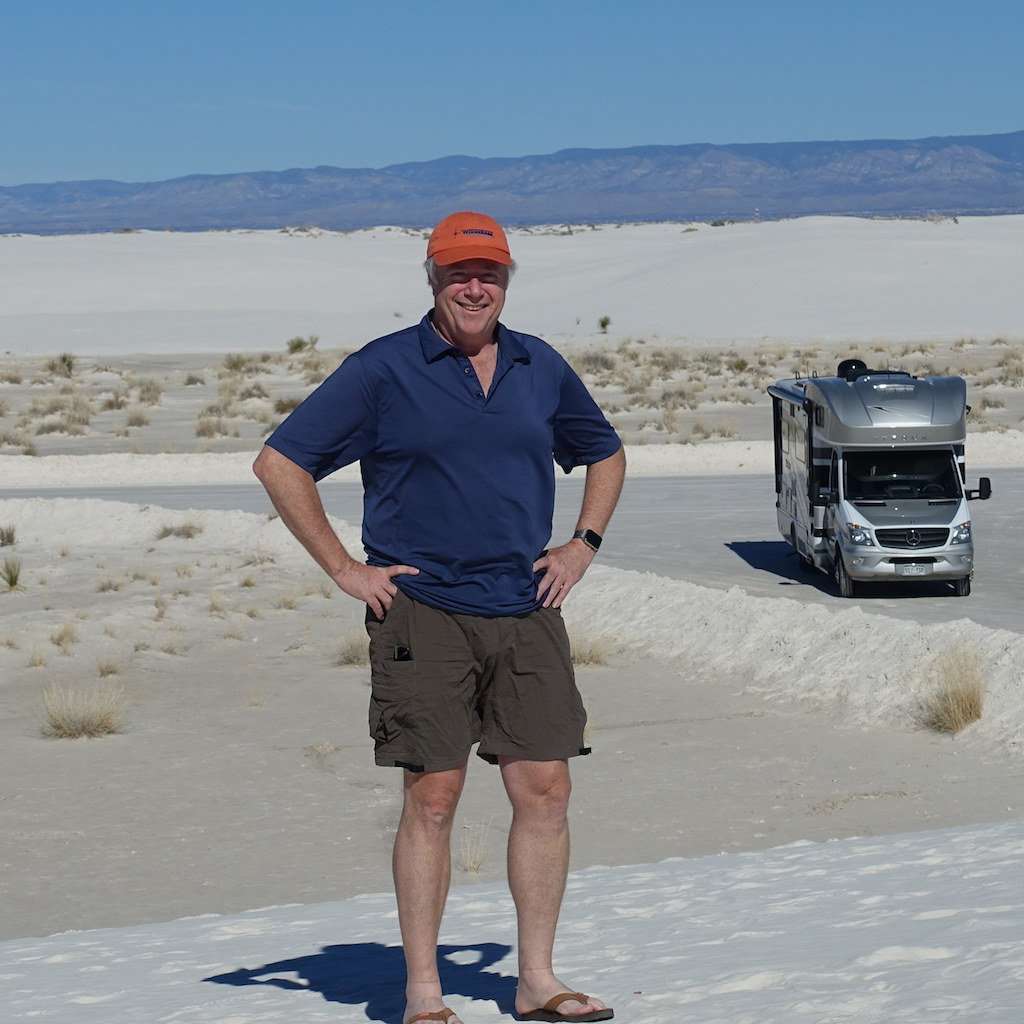 Photos memorialized another bucket list check-off, fine white sand squeezed up through barefooted toes, and a thorough dusting was undertaken prior to climbing back into the Navion.

While White Sands is a bit off the beaten path from highly traveled I-25, the town of Carlsbad (about 30 minutes north of the caverns) is a definite driving commitment. . .and worth every penny of gas.

A couple of days before we planned to visit the caverns I got onto the park's web site. In looking at tours, the site kicked me over to the company that manages tours. There are a variety of ones available and some require a lot of crawling and shimmying. For this trip, I opted for a more tame experience of the King's Palace that is only available by guided tour.

The night before we were guests courtesy of Walmart in Carlsbad and parked on the north side of the store along with several other trailers, motorhomes, and semis. The next morning we drove about 40 minutes south to the park turnoff at White's City. It's a small collection of a tourist and convenience gift store, gas station, motel, and quite a few RV hook up sites. There is no overnight camping in the park, so if you're looking for a hookup close by, this is the best bet.

White's City takes its name from Jim White. White was a sixteen-year-old cowboy who, in 1898 is credited with discovering the cave's natural entrance after observing what he thought was smoke from a distance only to see, as he got closer, tens of thousands of Brazilian free-tailed bats taking to the early evening sky. Until his death in 1946 White became the advocate, promoter, and protector of Carlsbad Caverns.

It's a winding eight-mile drive up to the visitor's center, but it's both big-rig and 5th wheel friendly with plenty of oversize parking. The visitor center is quite large with exhibits, cafe and gift shop. We arrived about an hour before the tour and elected to take the elevators down to the Big Room where we and fifty others would spend ninety minutes touring the King's Palace. 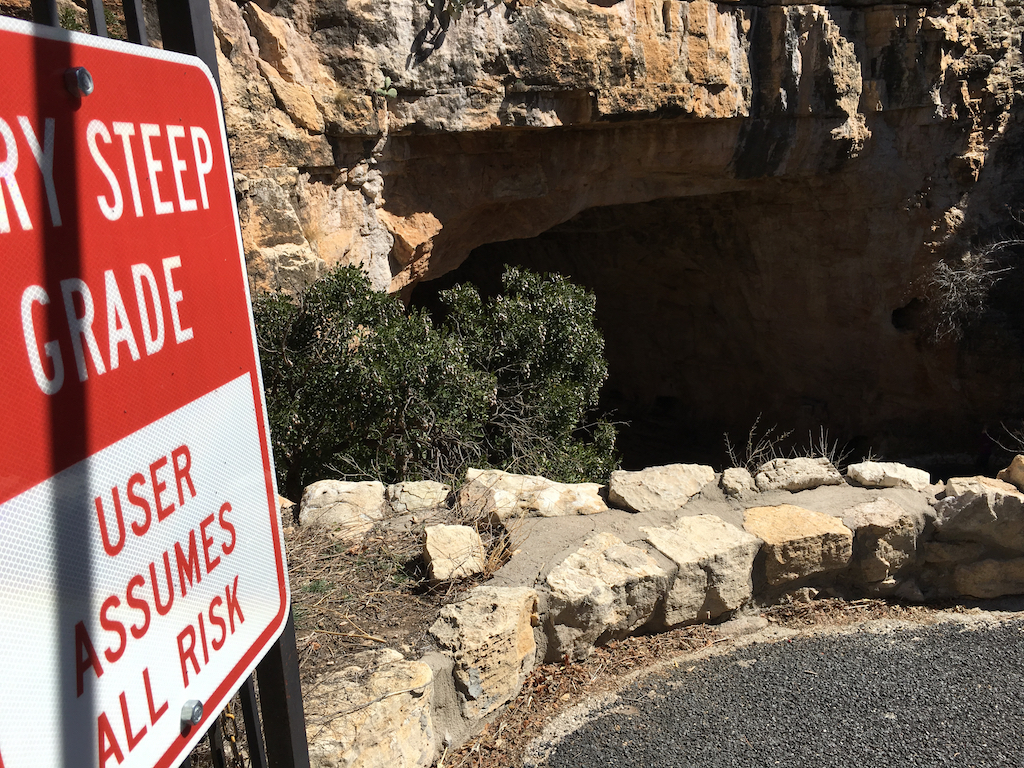 The natural entrance to Carlsbad Caverns is a paved, winding, and a STEEP 1.2 mile, 800' foot descent.

So let's talk about the ups and downs of Carlsbad Caverns and the elevators. There is a 1.2 mile paved and handrail bordered trail that switchbacks down eight hundred feet into the cave. A common strategy for most is to walk down via the trail and return via the elevator. Of course, our different inner hiking drummer whispered to us, "you'll get better exercise if you take the elevator down and then walk back UP the trail to exit." And, not surprisingly, that became our plan.

We learned that on a Sunday in high season that upwards of 5,000 people will visit the caverns in a day. Being that it was off-season it was estimated there would be one-tenth of that amount and, true enough, we felt like we had the caverns to ourselves. A week earlier on the President's Day weekend, one couple told us of a three-hour wait to return to the surface. 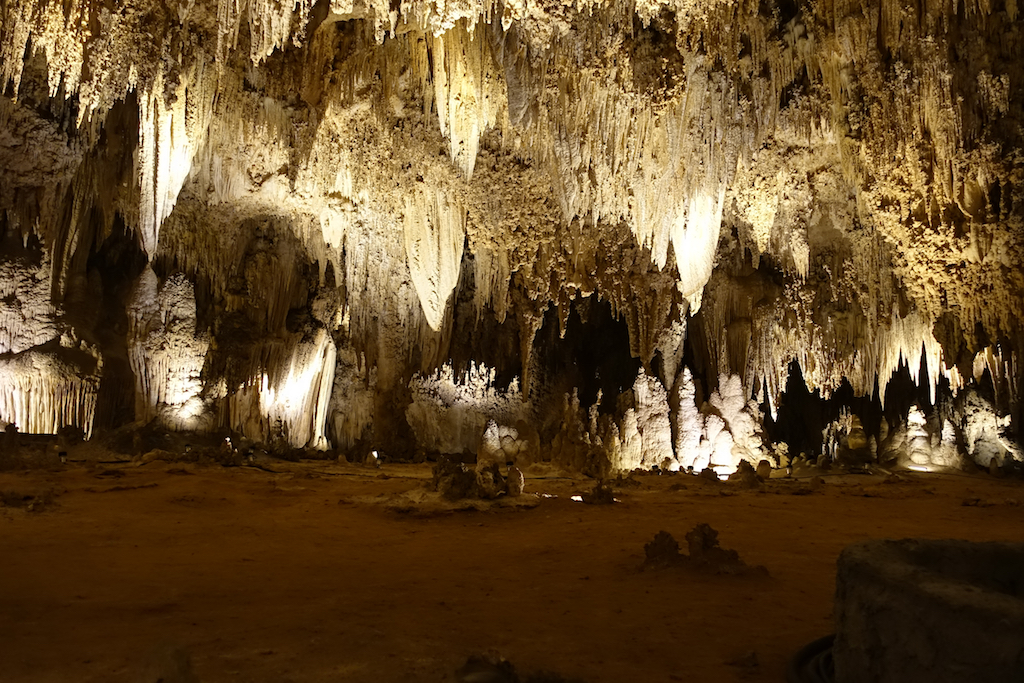 Our tour started promptly with Ranger Charlie giving a lively and well-practiced presentation. The tour's focus was less on the complex geology of the cave and more about the spirit of exploration. Ranger Charlie talked a lot about Jim White and the more modern explorers who floated helium filled shopping bags with a rope to hook on and then ascend upwards to a roof in the big room. The rope is still there and there apparently is another cavern above it. 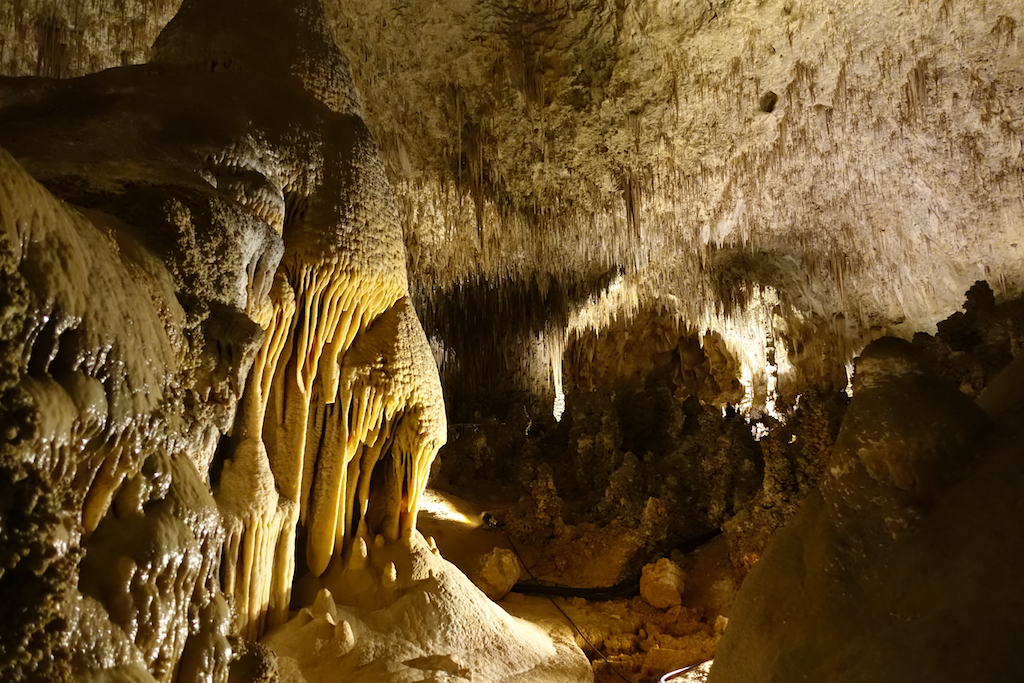 The path deepened into one exquisite room after another as did our appreciation for the hearty and fearless souls who first explored these geologic voids without any knowledge of what was beyond the edge of a single candle. To drive that point home Ranger Charlie had us sit along the pathway walls and first turned off the lights in the chamber and then, with a breath of help from one of our fellow tourers, blew out the candle. Darkness. Deep. Enveloping like a lead-lined shroud. In the dark the ranger spoke of Jim White's tale of being deep in the cave with only one match left, it was easy enough to envision how profoundly scary it would be to find yourself in a sightless world with no sense of where you are or where you should head. 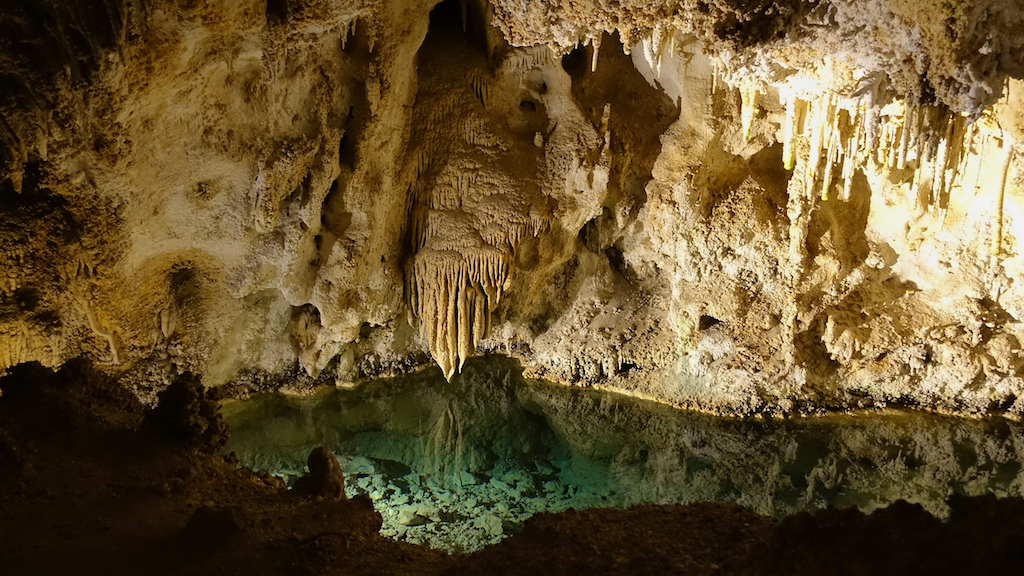 In the quiet impenetrable ink of the moment, there was a rough click of a lighter. Then a candle flicker. Then the reassuring awakening of the LED lights in the cave. Our moment of explorative imagination had passed and we were once again on our feet walking in almost library quiet through more fantastical features. 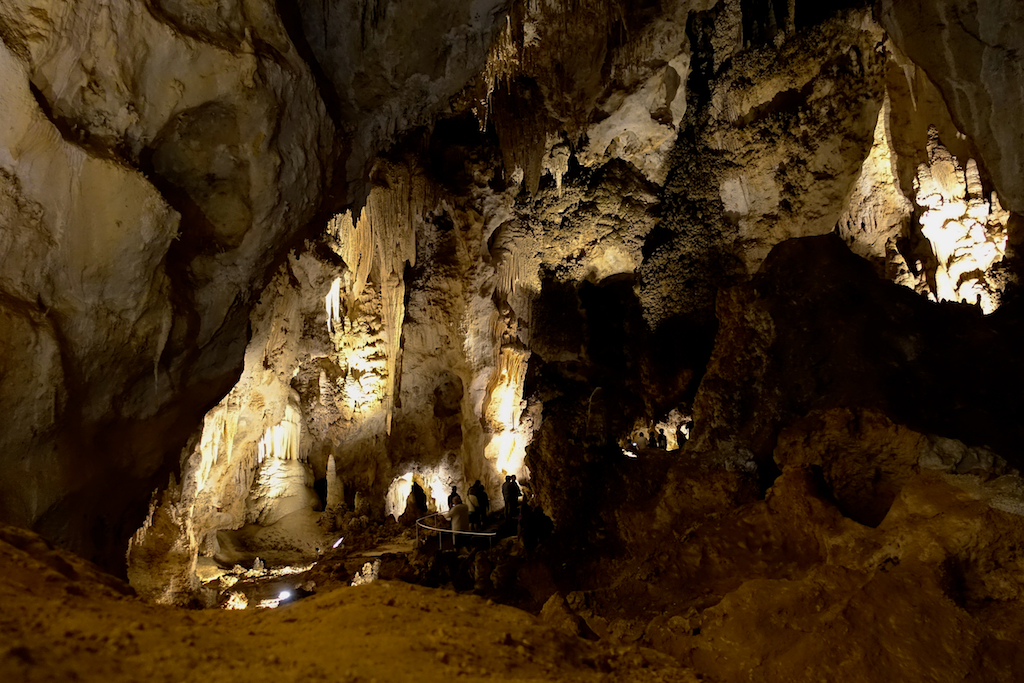 It's BIG! Can you spot the people in the picture? This was one of the smaller rooms.

After the tour ended, we set about to do the full circle of the big room which took a good forty minutes with occasional camera stops. I was quite pleased with the long shutter exposures of my little Sony travel camera and with more memories collected we found ourselves back at the elevators, restroom and snack bar 800 feet below the surface. We had accomplished our tour objectives and now it was time to reverse our course and hike up and out to the daylight. 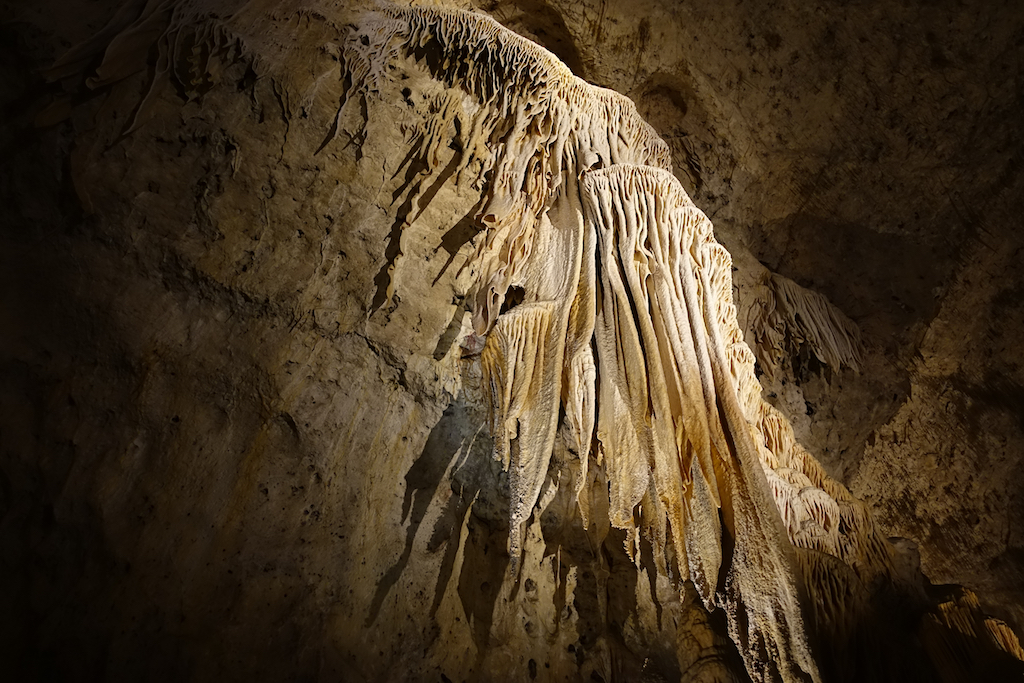 As we started up the insistent incline I thought about our "heart of darkness" moment and mused to myself how completely un-fun our ascent would be in total darkness. With occasional visitors descending, there were often chuckling remarks about our going the other way. We took it both in stride and pride at our contrary choice. We were making good time and from my Apple Watch display (cool that it illuminates in dim light) I had estimated it would take us roughly thirty minutes to pop to the surface.

About fifteen minutes into our ascent something interesting happened. The lights went out. I mean out. It was a definite power failure. Now, in the interest of providing a factual account of this event, in a few moments, the emergency lights kicked in. But the illumination was minimal. At some points, we could only dimly see the curves of the path, but the well-smoothed steel handrails offered the surety that we were where we should be. Eventually, we hit a point in our ascent that the iPhone came out of my pocket and was held high in flashlight mode so we could see the path.

It was about another ten minutes of walking when we saw rays brighter and bluer than the dim emergency lights. Somewhere in my memory cinema, I had quick flashes of scenes from "The Abyss" and "Avatar." There was something both ethereal and other-worldly about the descending glow of brightness. And there was something even more comforting -- the knowledge that we were a couple hundred feet, but still a lot of switchbacks, from the surface.

We ascended to the entrance only to be met with strong 30+ mile per hour winds. The throttling drone of the auxiliary power generators carried along with the wind. It was a lean-in moment to continue up the several hundred yards to the Visitor Center where we happened to meet Ranger Charlie.

"Did you guys have a power outage about twenty minutes ago," I asked.

"Yes we did, but we got things back up right away," he replied.

"Well, we just came up from the cave and it's still emergency lights only," I said.

He smiled with surprise and gratitude, "Wow. We'll get on that right away," and hurried into the office behind the front counter.

I'm sure that for those who were descending as we were coming up they were soon to see the caverns fully lit as we did, but not before they too would have a fun story of unanticipated adventure to tell.