Where the Soul of the West Lives 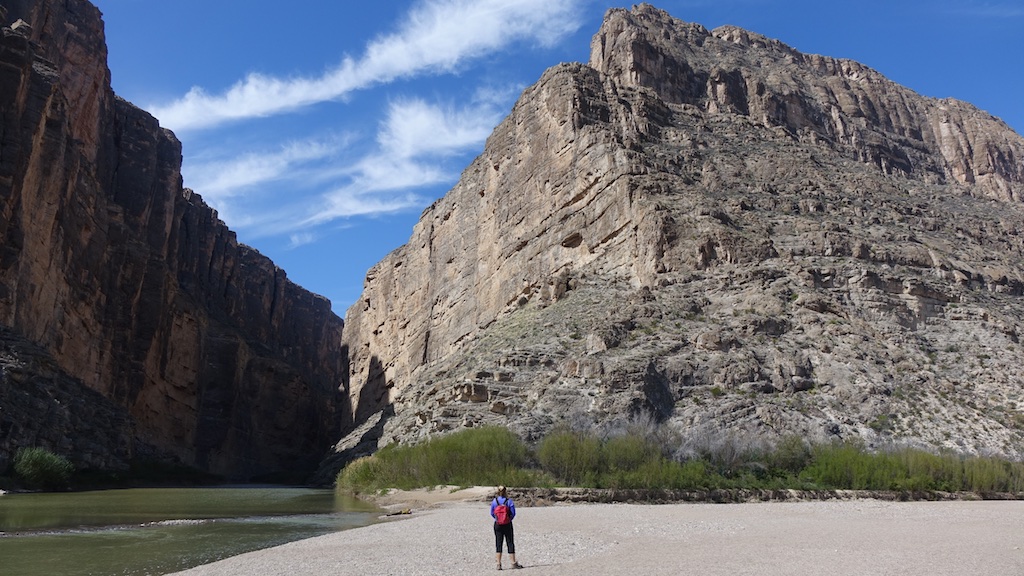 A benign border. The Rio Grande cuts through Santa Elena Canyon with the US on the right and Mexico on the left.

Big Bend National Park, separating the US from Mexico, with the Rio Grande as the dividing line, was our destination. Typical of national parks during high visiting seasons (for Big Bend it's anytime EXCEPT summer), trying to secure a last minute campsite or RV hookup was pointless, so, settling for the next best thing we found a hook-up at the Lost Alaskan RV Park in Alpine, about 100 miles north of the park.

Alpine sits at the remarkable altitude (at least for Texas) of 4,700 feet in the higher northern tilt of the Chihuahuan desert. Like many west Texas towns it's a hardscrabble, somewhat dusty place, but with a sense of orderliness, pride, and community that seems to embody the western cowboy image, more so than more northerly western states.

And our impression of the endless expanse of the west with miles of barbed wire running along two-lane blacktop, pointing to low ridged mountains on the horizon, has been shaped by the stories told through books, art and movies.

A little less than a thirty minute drive west from Alpine the traveler decelerates to drive through Marfa. Shortly after leaving Alpine the low rocky mountains give way to a flat, dusty, arid plain and coming up on Marfa, from a slightly higher elevation, the town is easy to spot as a oasis of trees defines civilization looking much like a lake in the middle of the yucca and scrub of the desert. 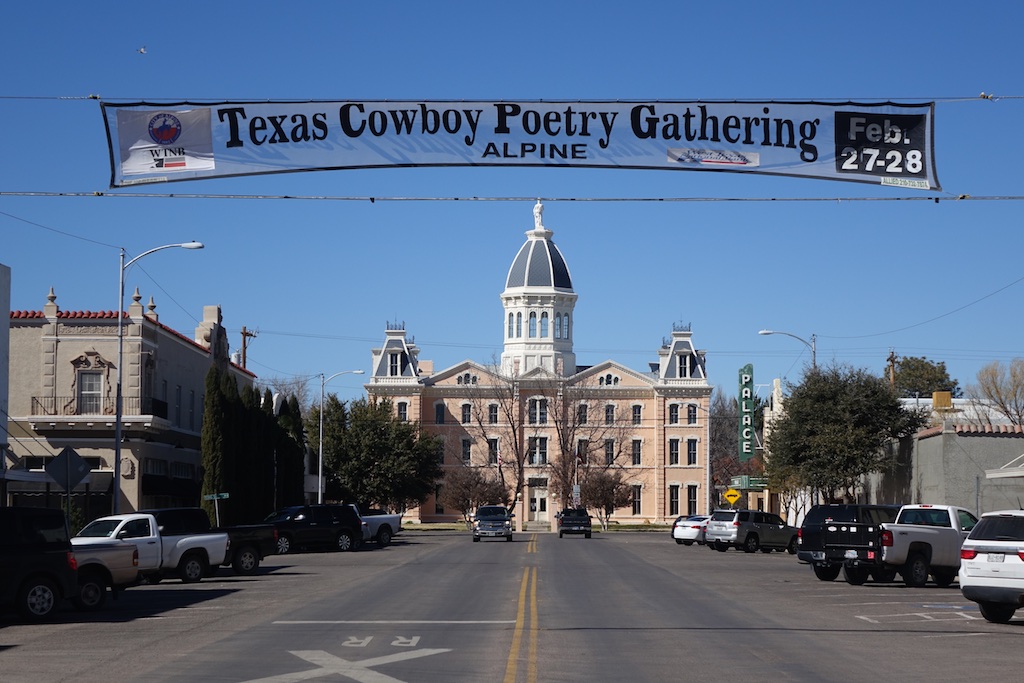 Marfa has it's own charms with little flickers of new age rediscovery - think Santa Fe and Taos forty years ago. While the austere land around Marfa may repel, the legacy of old architecture attracts. The county courthouse is a splendid wonder and dominates the view as you drive down the town's main street. And just off to the left is the historic El Paisano hotel with strong hints of Spanish colonial architecture and some magnificent cypress trees, planted long ago to stand as sentries in the hotel's entry courtyard. 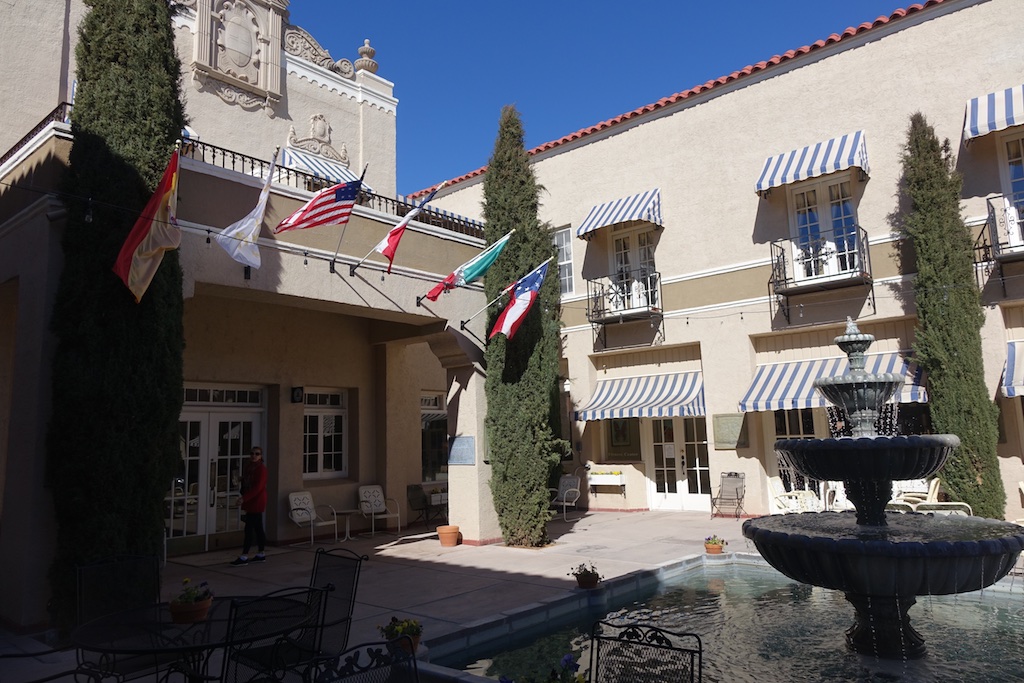 Old Spanish charm awaits inside at the Hotel Paisano in Marfa.

Perfectly maintained and restored, the Hotel Paisano is one of the very few, if not the only, Southwest hotels (often near the rail line) still in existence. And, in a very unusual way, it plays a supporting role to the legend of Texas as written about by Edna Ferber and put into Technicolor in the George Stevens film "Giant." This sprawling epic of love and oil in the arid Texas plains was shot around Marfa. The hotel hosted the crew and actors which included Rock Hudson, Elizabeth Taylor, and James Dean. This was to be Dean's third and final movie before he died in a car crash at the age of twenty-four and before the film was released (Dean was nominated posthumously for an Oscar). 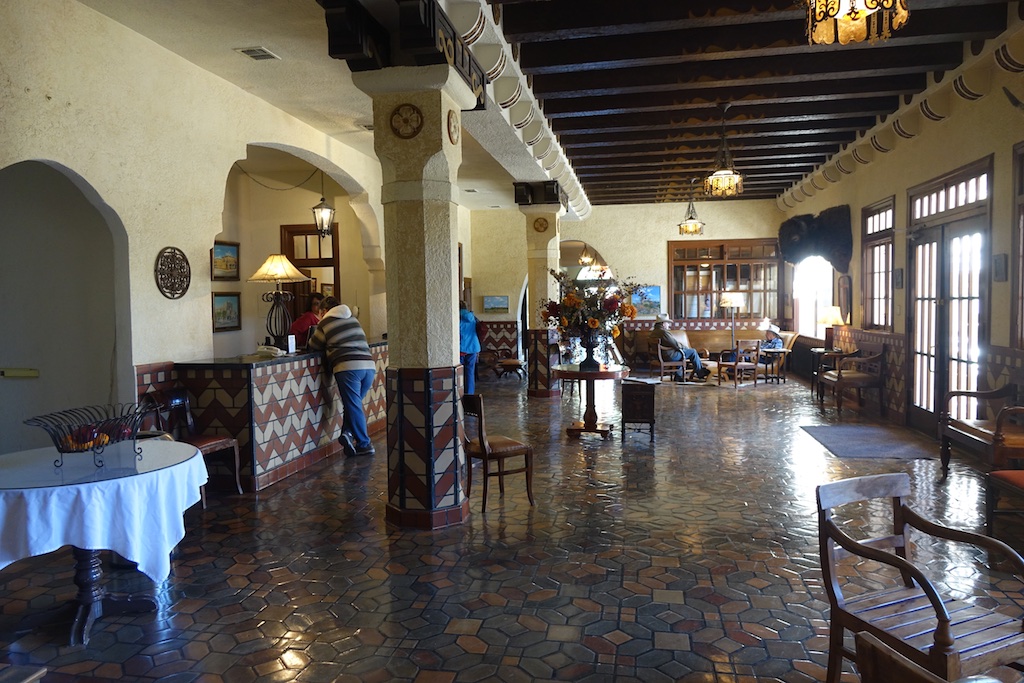 A quiet Saturday afternoon in the Hotel Paisano.

In the hotel's rambling gift shops where one room leads into another, one room is dedicated to the film selling posters, books and, of course DVDs. My favorite trinket was brass room key tags, the room number stamped into the metal along with the name of the star assigned to the room.

Movies have shaped our modern view of the American West, but there's a well-practiced art form that, perhaps more than anything else takes you deep into the core of the western experience. And just by pure, dumb luck, we stumbled across it on the one weekend a year where the truest essence of western culture fills the parking lots at the Sul Ross State University where visitors congregate from across the country for the "Texas Cowboy Poetry Gathering." In 2015, the Gathering was celebrating it's 29th year. 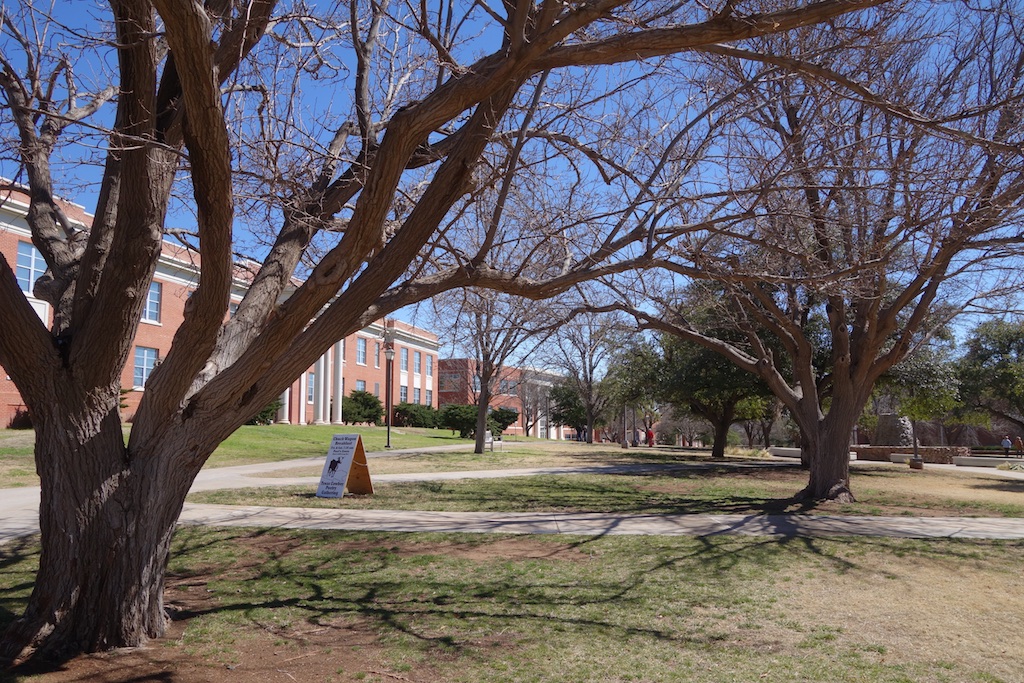 The Gathering is a non-profit event where over fifty storytellers, poets, musicians, and singers come together -- and many of the participants possess all these skills. To learn more about the event we sized up the lunch crowd at the McDonalds across the street from the University and chatted up two women who showed us where to go and purchase a program - for a buck.

Talk about entertainment value. With your one dollar program came the performance list that, throughout the mornings and afternoons for two days, you could go to the classrooms where groups of performers would play, recite and story tell for an hour -- all for free. There were also two evening performances at $15 per ticket, but those were sold out well in advance.

We followed the suggestion of our two McDonald's advisors and made our way for a 1:30 performance in a computer science classroom. We arrived about a half-hour early and, by fifteen minutes before the performance, it was standing room only.

After a brief introduction, the rotation between a storyteller, musician/storyteller, and singer would cycle four times with each subsequent performance weaving an enchanting spell over the appreciative audience.

We sat in a tiered lecture hall with swing-away seats behind narrow desks where student laptops usually sit. At the front of the classroom were three projection screens and video projectors hanging down on poles in front of them. There was a desk with a video equivalent of the old overhead projector and, hanging over the center marker board was a hand-painted expanse of canvas of a western sunset scene to help create the mood.

In a modern, high-tech classroom, even with the mural-like backdrop, the venue seemed at odds with the romance of the west which we were all pining to hear. It didn't matter. 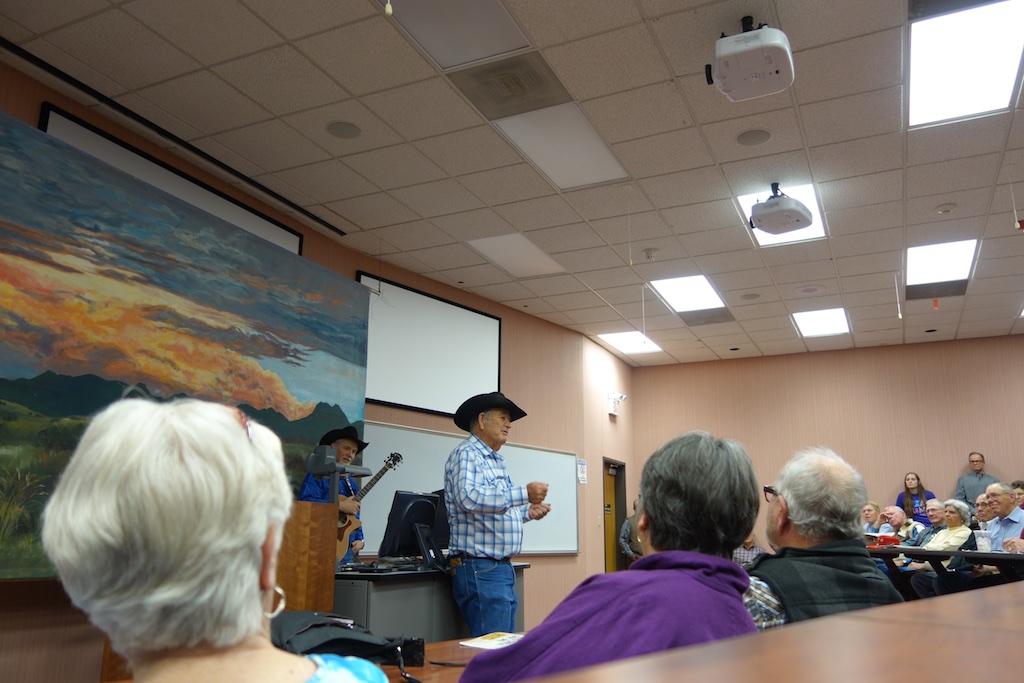 Apache Adams starts quietly, but reels the audience in with tales of the modern west.

First up was Apache Adams, an older cowboy from the area, probably well into his seventies. Here's a man who found a lot of humor in life from cattle feeding, to bill collection, and every story ended with a well deserved laugh and round of applause. Adams, with an ample girth overhanging his belt buckle, a sun-weathered face, and black cowboy hat, fished a small top spiraled notepad out of his pocket to review his list of stories, much like an NFL quarterback would read the plays on a wrist band. 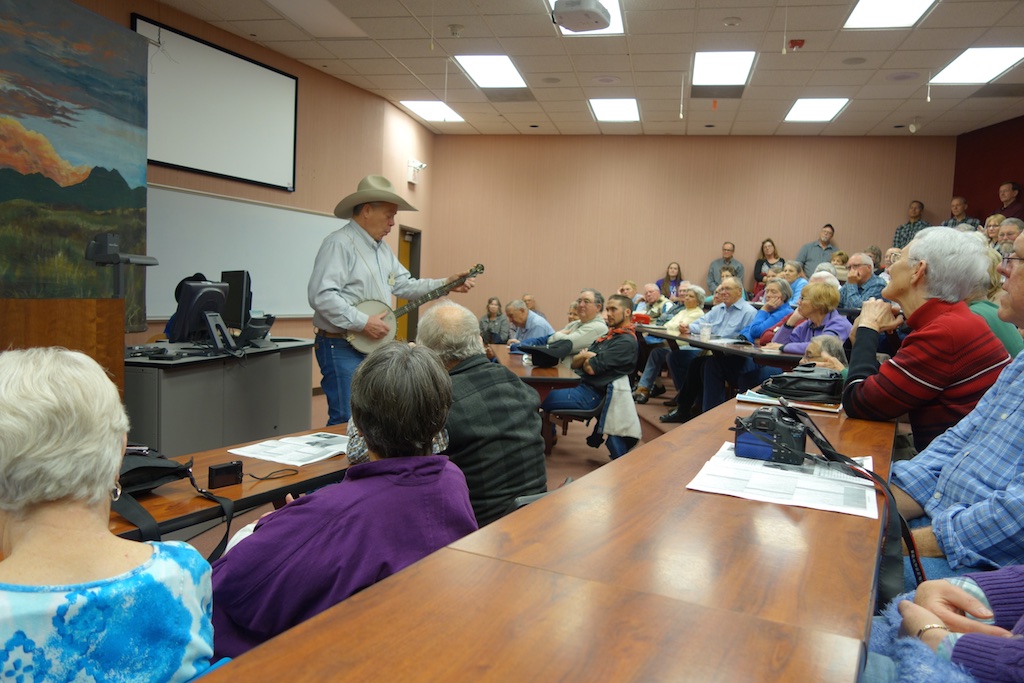 Sitting behind the desk, the next performer rose, Pipp Gillette, a man in his 60's from a family cattle ranch in Lovelady, Texas. Pipp and his late brother Guy recorded eight cowboy music albums and had won numerous regional and national awards. Gillette's performances included some songs accompanied by either his well worn banjo or guitar. One poetic recitation was accompanied by "the bones." In this case these were rib bones of a less than cooperative cow in Gillette's heard years ago. Played expertly like castanets, they were the rhythmic counterpoint to an amusingly delightful poem, told in an Irish brogue, of how the devil "furnished" Texas. 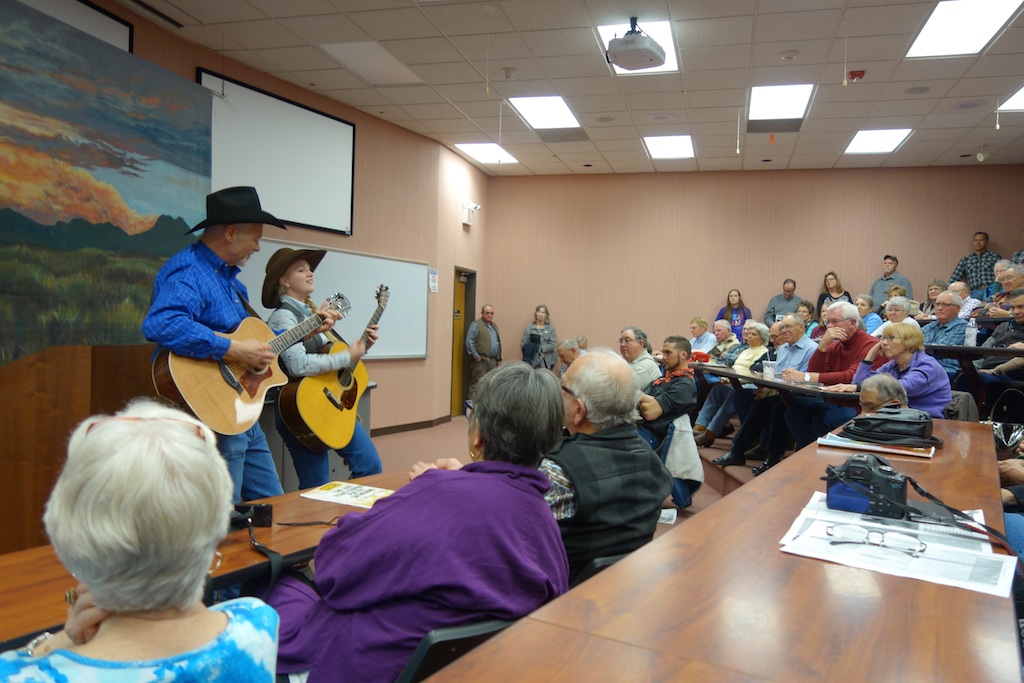 A fresh face of the 21st century west, with a 19th century heart, Mikki Daniel, charmed a very appreciative audience.

With the performers, and certainly most of the audience, being near to or collecting social security checks, it seemed like eighteen year old Mikki Daniel, from a dairy ranch outside of Dallas, was completely out of place. But, her cowgirl hat, boots, jeans and guitar fit right in. And with a well practiced, sweet-sounding, pitch perfect voice she strummed and sang songs from vintage Dale Evans to contemporary Susie Boggess. Her strumming, while doing a little storytelling of her own, was captivating and also affirming that the allure and charm of telling the story of the west through songs and poetry are still being embraced by younger generations.

As this trio of performers rotated one to the next, the walls of the classroom melted away. I could smell the woodsmoke of a fire, interrupted by an occasional crack of sparks. A cool evening breeze behind the back didn't seem to bother as the warmth of the fire in front was more than enough. The orange flickering light of a newly added log bringing the singers, poets and storytellers in and out of the shadows.

If you want to find the soul of the west, you'll find it wherever cowboy poets gather, to sing songs, wax poetic, and spin tales. It can be anywhere in the country. But somehow in a land of pickups, broken-in cowboy boots, and a glittering canopy of stars over high desert plains, it seems just a little more magical -- especially when you stumbled on it by accident.

Southwest Texas is dotted with RV parks usually in sight of the highway. There are several we drove by as we explored the Alpine and Marfa area. The Lost Alaskan RV Park says that they're the best park in the area. And, in our estimation, that is a very factual advertising claim. 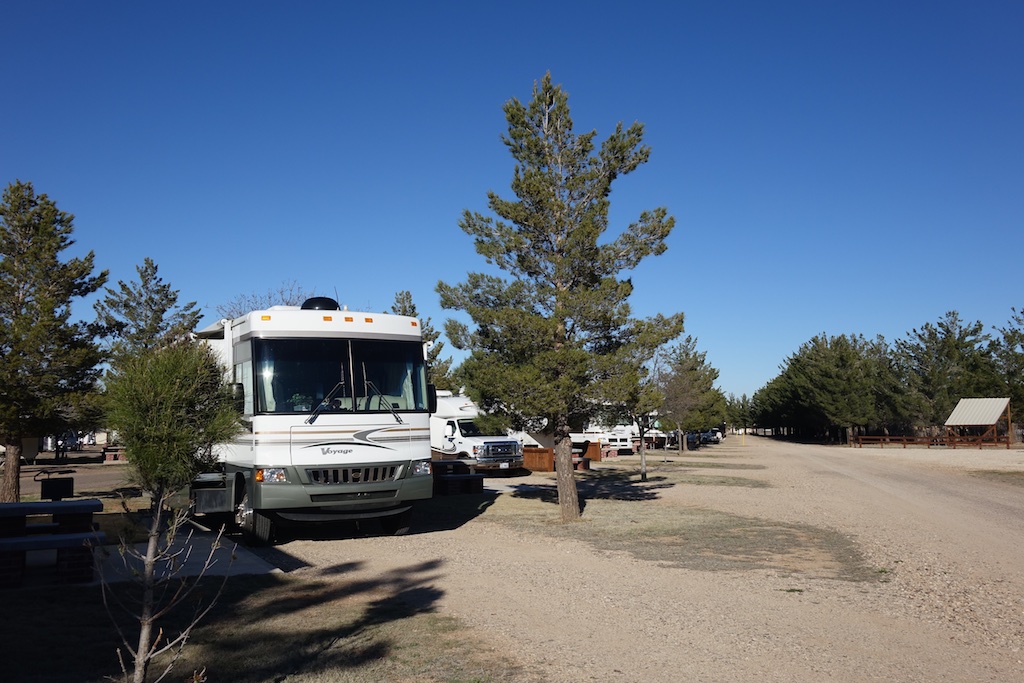 All the sites are drive throughs which is perfect for big rigs and large 5th wheels. The sites are well spaced, have brick and concrete picnic tables and, for most sites, good satellite access, plus limited cable service too.

The park wi-fi system seemed to sag under the weight of lots of guests. We preferred to stay with our AT&T wireless hotspot, but even though AT&T's service is fast LTE, it too suffered from painful delays - however it was quite speedy at 1 AM.

There are a few commercial campgrounds that are 10 to 20 miles away from the Big Bend NP park entrance. Don't expect much. They looked like pretty basic gravel sites with hook-ups no trees or amenities. On the other hand, staying closer or, if you're fortunate to get a reservation, inside the park saves a nearly 300 mile day of driving to and from Alpine.