Since this is a post about the Black Hills, I'll start by quoting the Man in Black: I've been everywhere, man.

If we're talking the Fifty Nifty, I'm not exaggerating. Start reciting the lyrics to Johnny Cash's classic road trip song, and I can check the American places off my list, one by one. Reno, Chicago, Fargo, Minnesota, Buffalo, Toronto, Winslow, Sarasota...The song goes on, but I can keep up.

Of course, there is always a road not yet taken--even if it's a road that you've already taken before. What is mean is this: Even if you're re-visiting the same place, it's NOT geographical deja vu. When you re-explore, it's always a new experience. So it was with us and the Black Hills of South Dakota.

Sometimes you revisit the same place, but seek out new experiences. So this time around, before we actually reached the Black Hills, we stopped for a peek at a fleeting (relatively speaking) moment in history--at Minuteman Missile National Historic Site.

For about three decades, beginning in 1963 during the height of the Cold War, there were 150 missile silos in western South Dakota, containing Minuteman Intercontinental Ballistic Missiles and controlled by 15 Launch Control Facilities. Two facilities remain--Launch Control Facility Delta-01 and Launch Facility (missile silo) Delta-09--along with a Minuteman Missile Visitor Center that tells the story of the Cold War and nuclear deterrence and the 24/7/365 alert status when the missile fields were operational.

Think about that for a moment: This once super-secretive symbol of nuclear tensions now has a visitor center. So we visited. My favorite part? The gift shop sold Dr. Seuss's decidedly anti-proliferation "The Butter Battle Book." I got less of a kick from the fact that the shop also soled "Atomic Fireballs" candy. There was one Launch Control Facility for every ten Minuteman II nuclear missiles. Our ranger-guided tour of Delta-01 (tickets were first-come, first-served) included topside support buildings, as well as living and dining areas for the eight Air Force personnel stationed there. Apparently, they liked to play Battleship. Then we climbed into an elevator that took us 31 feet underground. And we walked past an eight-ton blast door, which was adorned with yet another example of dark humor. And we got an up-close view of the complicated (if antiquated) electronics at the fingertips--and the stunning responsibility on the shoulders--of the people who were tasked with overseeing a 1.2-megaton nuclear warhead. I would describe it as a rather haunting feeling. And by the way, one and only one Minuteman Missile was ever launched from an active facility--an unarmed missile on March 1, 1965. It arched over the prairie to a height of one mile and, seven seconds later, landed in a pasture in Newell, South Dakota. So what was new to us as we headed toward the Black Hills. Now, sometimes revisiting an old place is all about timing--even something as simple as the time of day. A few years earlier, when we drove along Highway 240 through Badlands National Park, it was an overcast day, and it was approaching dusk. The otherworldly scenery offered a sense of foreboding, what Frank Lloyd Wright himself characterized as "an indescribable sense of mysterious elsewhere."

This time around, when we doubled back to take the drive after visiting the missiles, we saw the rugged formations from a new visual perspective. Conservation writer Freeman Tilden described the Badlands as having "colors that shift in the sunshine... and a thousand tints that color charts do not show." The bright mid-afternoon sun offered a completely different palette. We saw the eroded buttes of the Badlands from different angles. The pinnacles and spires cast different shadows. The vibe was altogether, well, different. 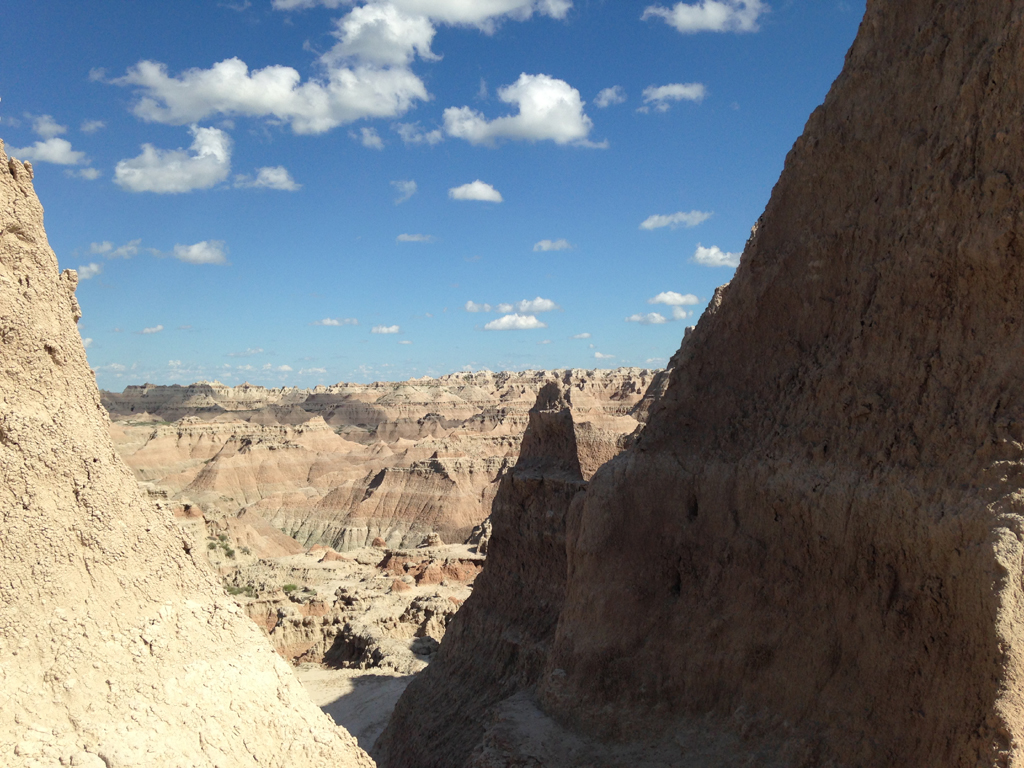 And for a while, we found ourselves accompanied by a few friends. That was good timing, too. Of course, the time of year also matters. We once visited Grand Canyon on September 30, when the leaves of the aspens surrounding the North Rim were turning from green to gold. Perfect. And we once toured Disneyland in mid-February when the crowds were thin. Brilliant. On this trek through the Black Hills, we arrived on an exact date that was serendipitous. In fact, we made it just in time. And it was a blast. Literally.

Seventeen miles southwest of Mount Rushmore, the Crazy Horse Monument, begun by sculptor Korczak Ziokowski in 1948, is still very much a work in progress. It is touted as the world's largest mountain carving, and when it is done--decades from now--it will be truly breathtaking. A horse and rider 22 stories high. A reminder to the world that the Native Americans had great heroes, too. Amy and I were heartened to see the scores of visitors there--both Native and non-Native alike. So we took a selfie with Crazy Horse, a sentence I'd never thought I'd write. The monument's sculptor died more than three decades ago; his family (including ten children) continues to manage the project, and there is a cultural center and sculptors studio on the premises. There is a nightly lighting ceremony, but twice a year--on June 26 (the date of the Battle of Little Bighorn) and Sept. 6 (the sculptor's birthday)--there is a night blast on the mountain. It is a series of more than 100 carefully-placed mini-explosions, working their way up toward the top and sounding very much like war drums. Powerful experience to honor a Sioux warrior. And we timed it perfectly.

This is the best night-blast photo I could muster... Of course, you can't really cruise through the Black Hills without making a stop at Mount Rushmore. We did it several years ago with our sons, staying for the nightly patriotic ceremony, paying our respects to Washington, Jefferson, Lincoln, and Theodore Roosevelt. In fact, along with the likes of the Statue of Liberty, the Golden Gate Bridge, and perhaps the Gateway Arch, I'd put Mount Rushmore on the Mount Rushmore of man-made American creations. This time, sans kids, we took the half-mile hike around the Presidential Trail, which led us past the sculptor's studio, where we were fascinated by a model of the original Rushmore concept. Who knew the presidents were originally going to have torsos and clothes? And we stopped for a spell in the Mount Rushmore Museum, where we collected facts the way the bottom of the mountain collects rubble. Doane Robinson--ever heard of him? He was the state historian who first conjured up the idea of a mountain carving to bring tourists to the Black Hills. Yeah, chalk that up as a winning idea. Fifty-eight years old--that's how old Gutzon Borglum was when he first began carving Rushmore in 1925. Which should give us all hope. And Lincoln--that's what Borglum named his son.

Speaking of which... it just so happens that my latest book, just published, is called The Presidents--a 96-page, illustrated coffee table book about the first 43 men to hold that office. Based on a painting by super-talented artist Zachary Pullen, it's the most visually stunning project I've ever had a hand in creating. So I've become a bit of a prez nerd. I can talk for days about not just Washington and Jefferson, but the likes of John Tyler (15 kids!) and Chester Arthur (80 pairs of pants!).

So I couldn't resist this photo--four icons who served as president and one presidential painting that serves as the book cover. Two masterpieces. And it just so happens that Rapid City, South Dakota--the City of Presidents--has something called the Presidents Walk, which features life-sized bronze statues of the commanders-in-chief scattered throughout the downtown area. We found a locator map at the visitor center (corner of Seventh and Main) and literally strolled through history. Jefferson is penning the Declaration of Independence. Harry Truman is holding the infamous "Dewey Defeats Truman" newspaper. John F. Kennedy is holding the hand of John Jr. William Howard Taft is preparing to throw out a first pitch (he was the first POTUS to do so), as Martin Van Buren looks on rather haplessly from the opposite corner. There is anachronistic irony galore. LBJ? He's perched in front of a gun shop. Richard Nixon? He was sitting about 15 feet from a "Road Work Ahead" sign. George Washington stands alert at the entrance to a Starbucks. George W. Bush offers a thumbs-up in front of a Hardee's. 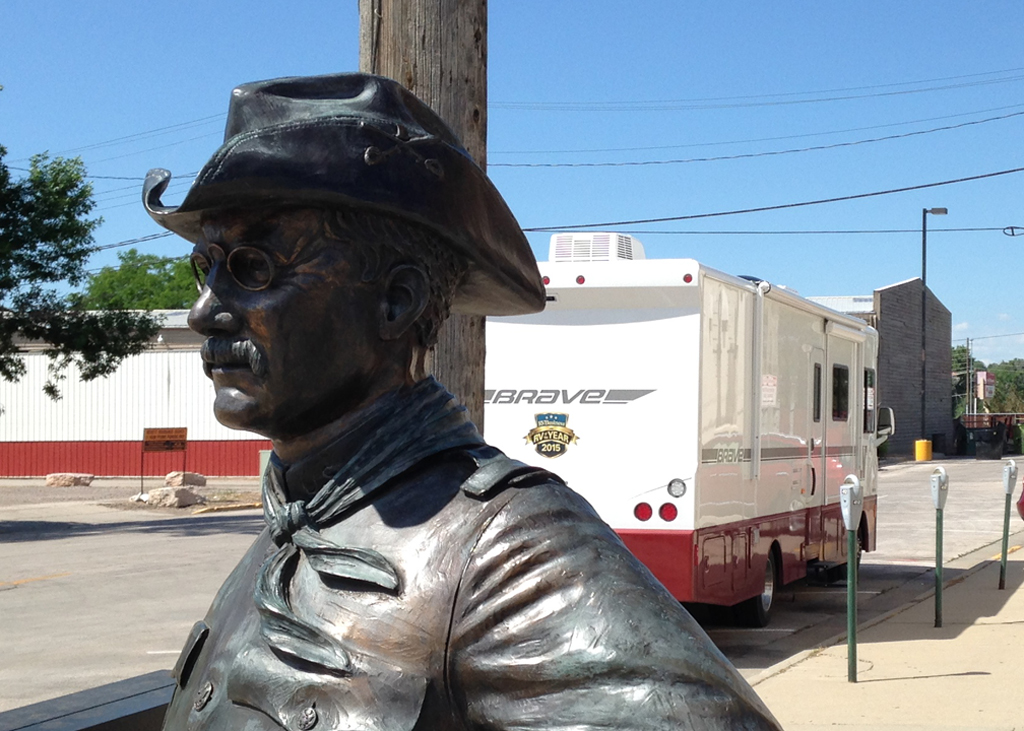 So that capped our colorful travels through the Black Hills. Then we traveled on, knowing that we'll always find something new to experience. After all, as Theodore Roosevelt once said, "Believe you can, and you're halfway there."