What Our 6-Month European Van Adventure Looked Like
Highlights of the Holcombes’ 18-country Revel road trip!
By: Peter & Kathy Holcombe 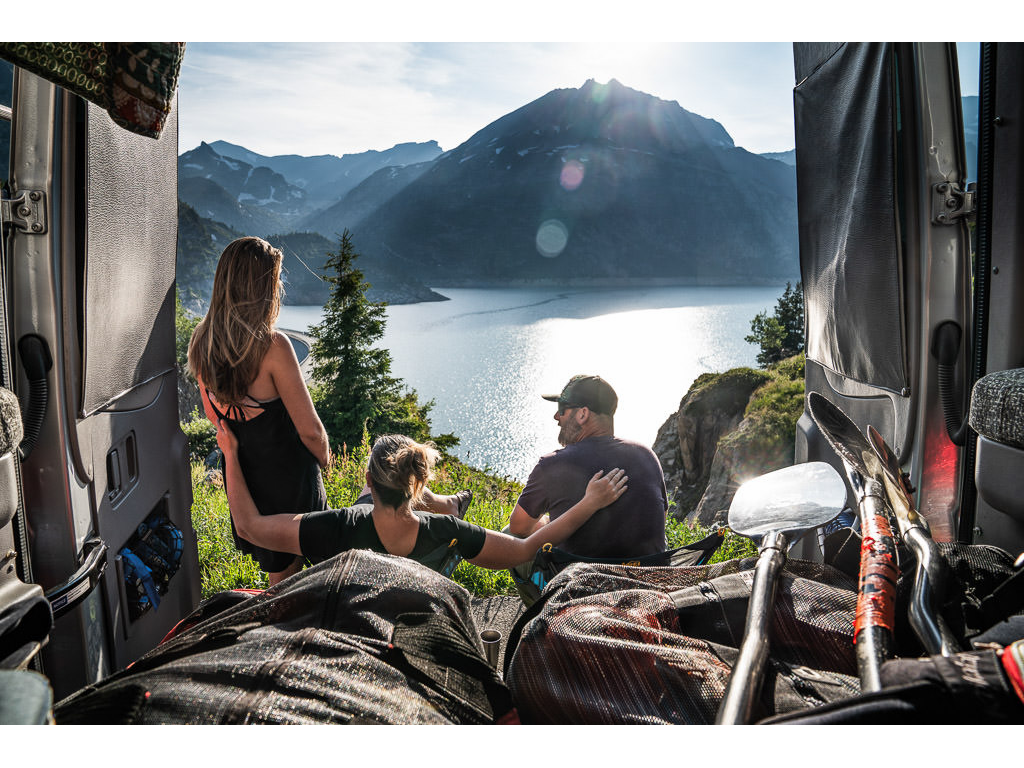 In June, we shipped our Revel from Baltimore, MD, to Zeebrugge, Belgium for a six-month European adventure. We traveled 40,000 miles across 18 countries. From the top of Norway to the tip of Spain, and the mountains of Croatia to the coast of Scotland.

The view of Lac Émosson in the French Alps just outside of Chamonix (pictured above) was one of many extraordinary boondocking locations we discovered on our journey.

Here are some other highlights of our trip …

Highlights of the Famagogo Europe Tour

After arriving in Paris a few days ahead of the Revel and exploring the city, we picked up our rolling home and made our way to Spain. 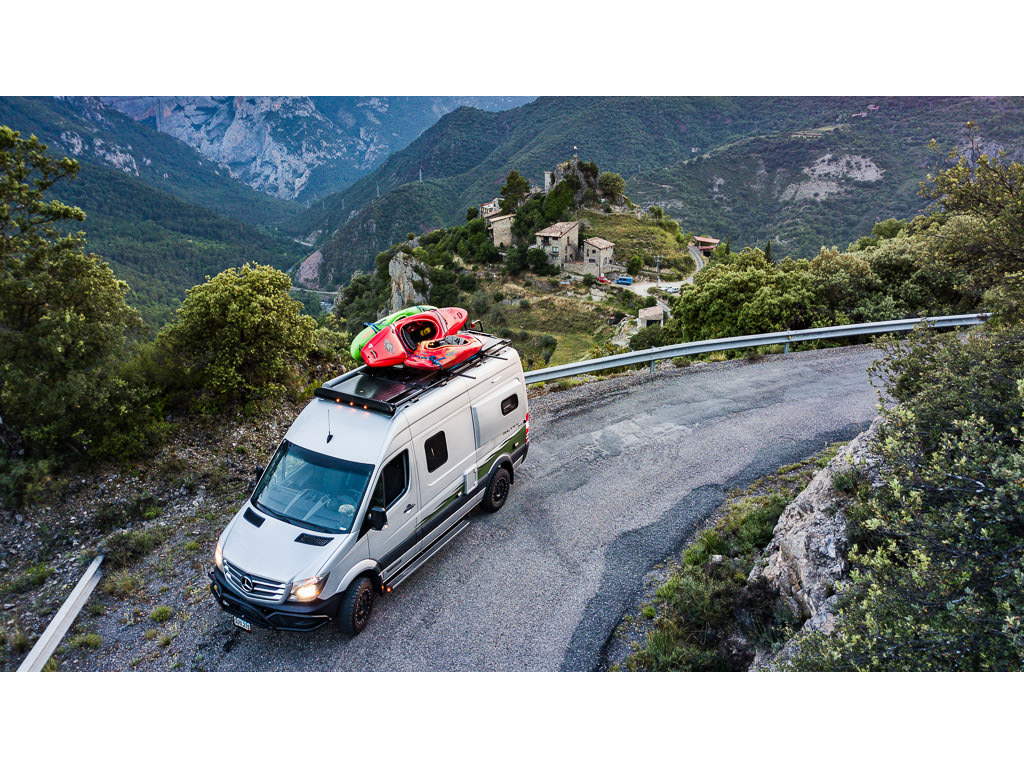 Our first month in Europe was spent exploring the Pyrenees around the small mountain town of Sort, Spain. The peaks were dotted with tiny villages that left us feeling like we had traveled back in time to an era long past.

We were in Sort, Spain, for the Freestyle Kayak World Championships. Our daughter Abby qualified for one of the positions to represent team USA at the event and spent the month of June training and competing amongst the best kayakers in the world. She ended up placing 4th in the world and we couldn’t be prouder of her accomplishments. 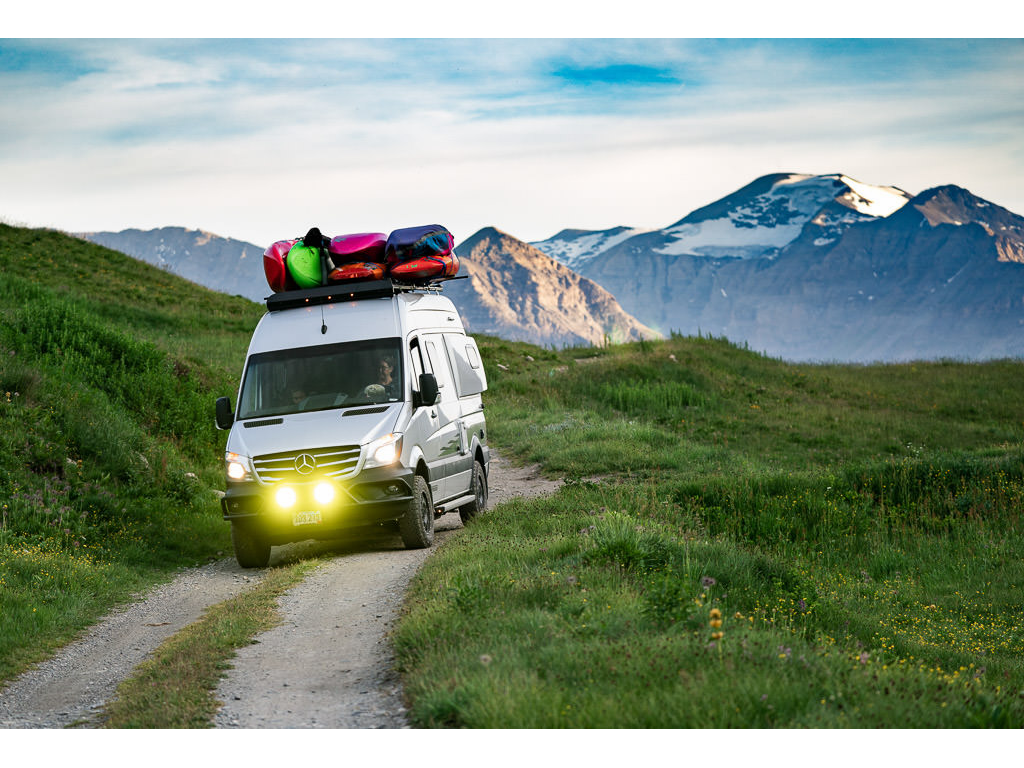 The Revel proved to be the perfect vehicle for our European odyssey. It was small and nimble enough to maneuver comfortably through both large cities and small villages, and rugged enough to take us down remote mountain trails in the French Alps. Peter’s creativity was supercharged in the Alps and he was up with the sun every morning taking full advantage of the golden hour to capture the majestic scenery. 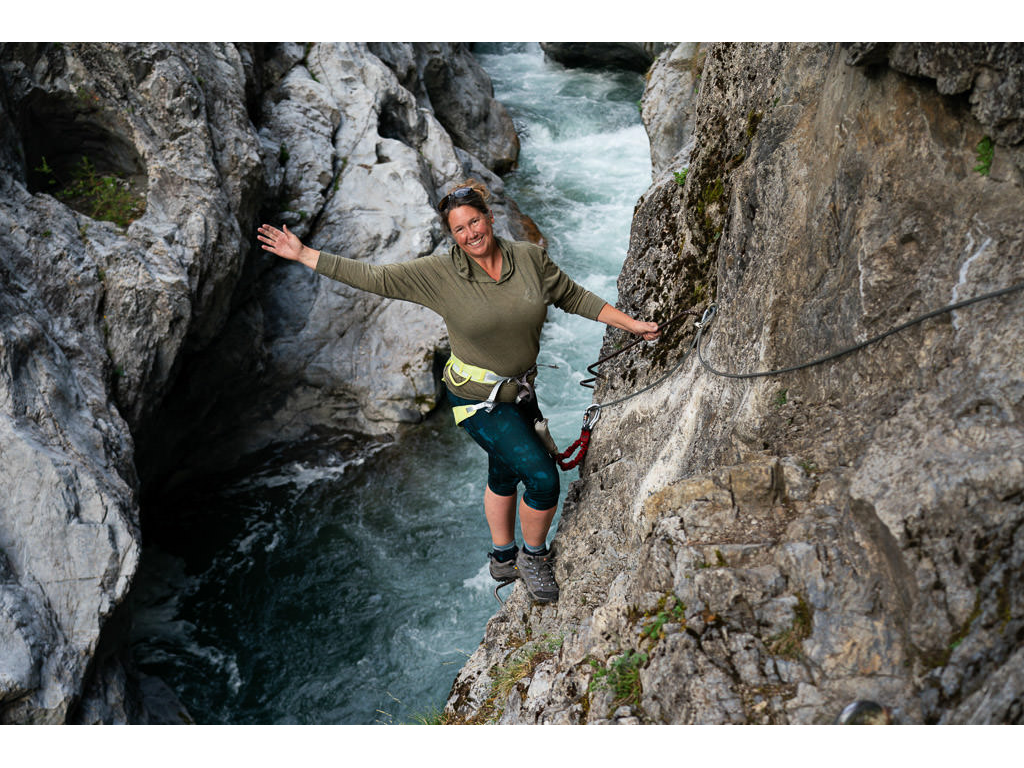 Just below the Chateau Queyras in the Hautes-Alpes in Southeastern France, lies the Gorges du Guil. Abby loved exploring the tight confines of the gorge in her kayak. But, above the River Guil was one of our very favorite adventures: the Via Ferrata de Fort-Queyras. A via ferrata is essentially a ladder that is embedded in a cliff with a cable that runs alongside the route where you can attach a harness as a safety precaution.

Driving through the Swiss Alps 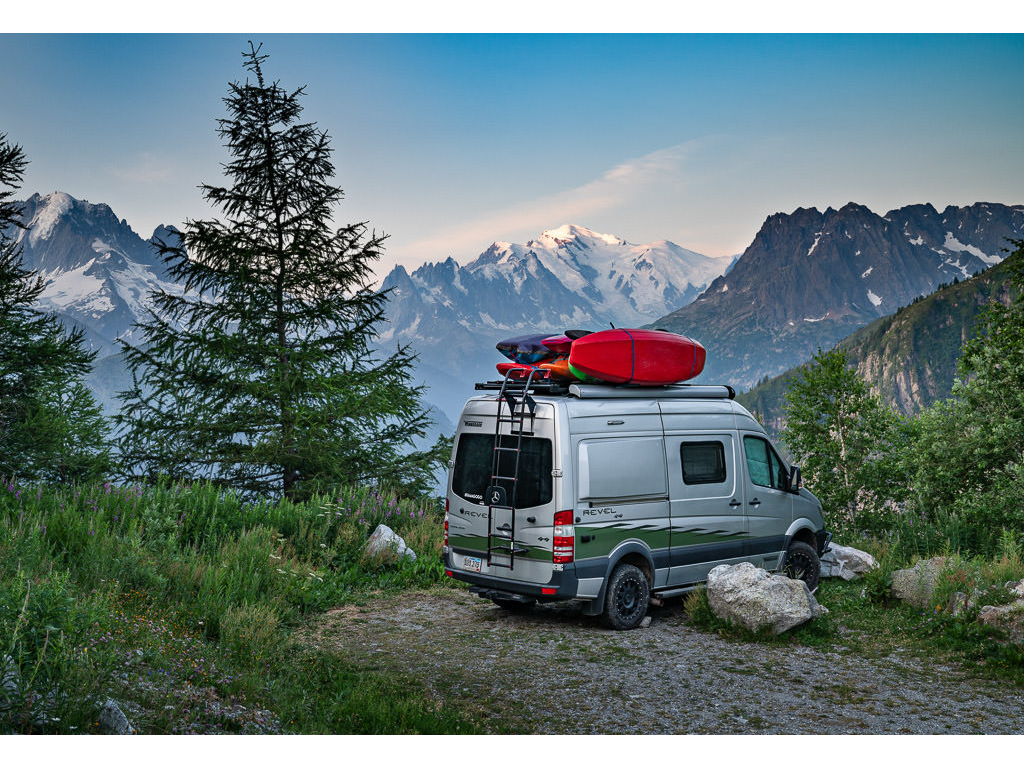 We often elected to travel on the smaller secondary roads over the highways of Switzerland and were rewarded with magnificent scenery every single time.

I think Winnebago knew exactly how we would feel on this adventure when they named the Revel. We certainly “reveled” in every moment we spent in the Swiss Alps.

One of our major objectives of this European road trip was to explore Norway. Even the tunnels in Norway are a marvel to behold. The Lærdal Tunnel is the longest road tunnel in the world at over 15 miles long. It was designed with lighting that mimics the sunrise to help relieve the monotony and keep drivers awake for the 20-minute drive through a huge mountain. 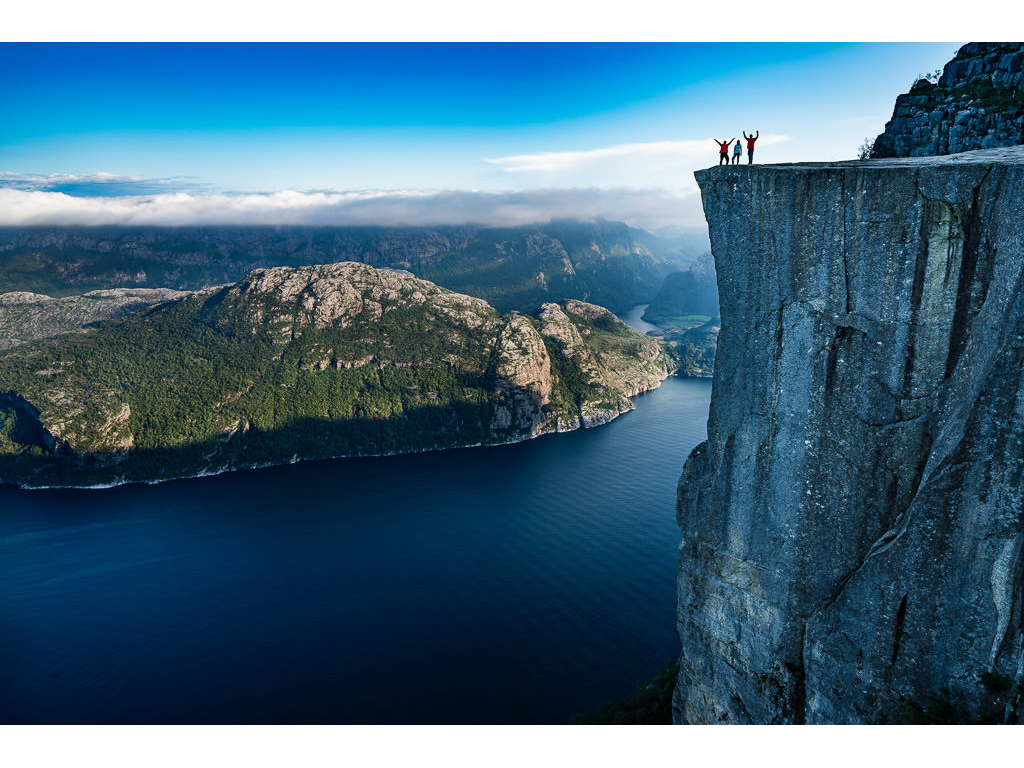 A favorite experience was the six-mile hike to reach Pulpit Rock. It was a steep and rugged trail, but oh, what a place! Another favorite was Voss, Norway - one of the premier whitewater kayaking destinations in the world. 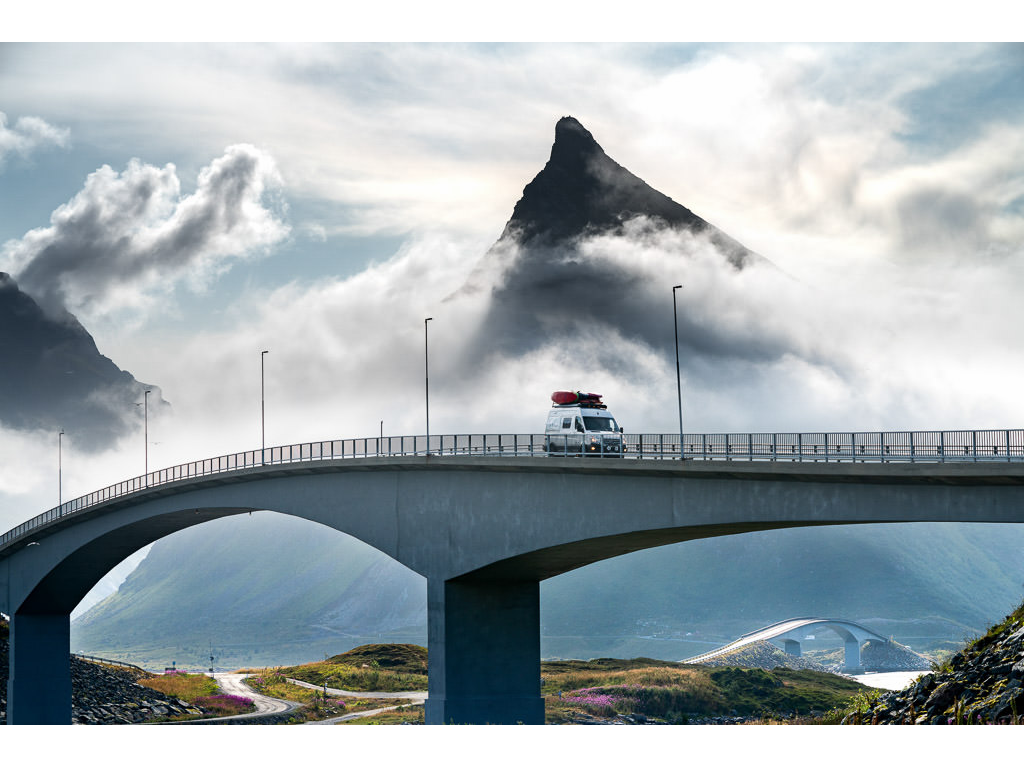 The bridges in Norway are a beautiful blend of form and function – this one in Lofoten being the perfect example. The Lofoten Peninsula in Northern Norway was punctuated with quaint fishing villages and spectacular scenery. Norway has a law that guarantees the right to camp for up to 48 hours as long as you are at least 100 meters away from any structure, regardless of who owns the property. There are thousands of pristine places like this that are perfect boondocking sites across the country. A strong ethic of leave no trace keeps these spots clean and available.

As much as we love our Revel, we also love escaping into nature and spending a few days in the wilderness. While the visitor center in Nordkapp, Norway, is the primary destination for those seeking the northern-most point of Europe, there is actually another peninsula just across the bay that is a few meters farther north that is only accessible via foot. 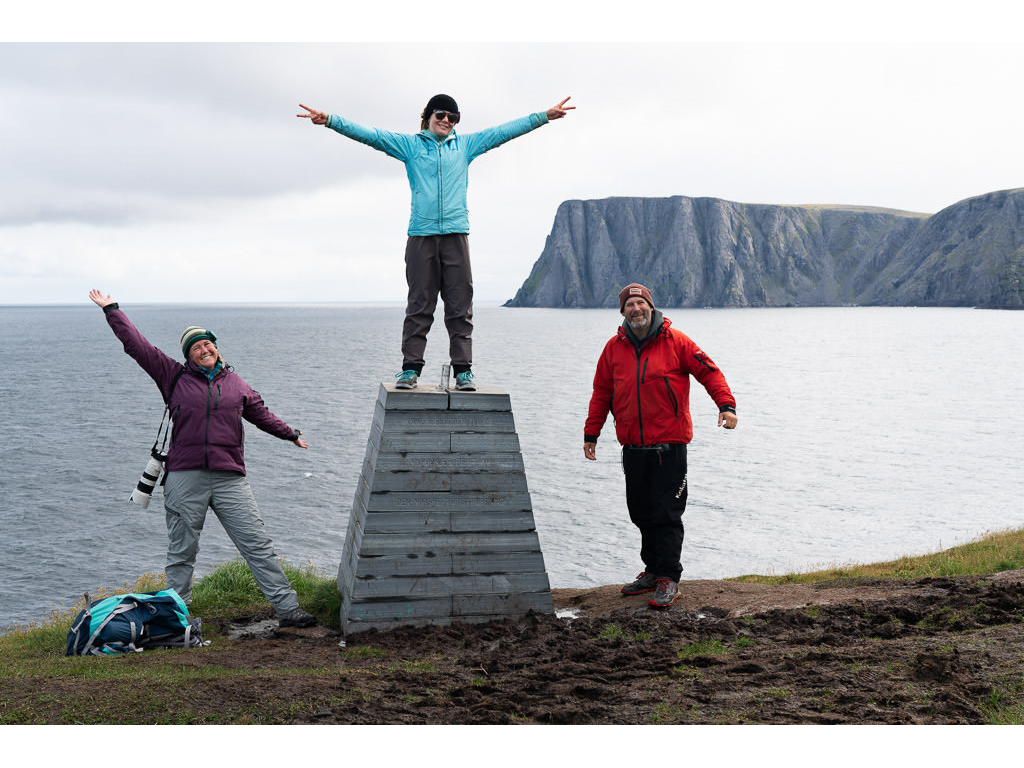 We spent a couple of days backpacking to the true northernmost point of Europe and found ourselves surrounded by reindeer. We arrived just as their coats were turning from brown to white in preparation for the winter snow. 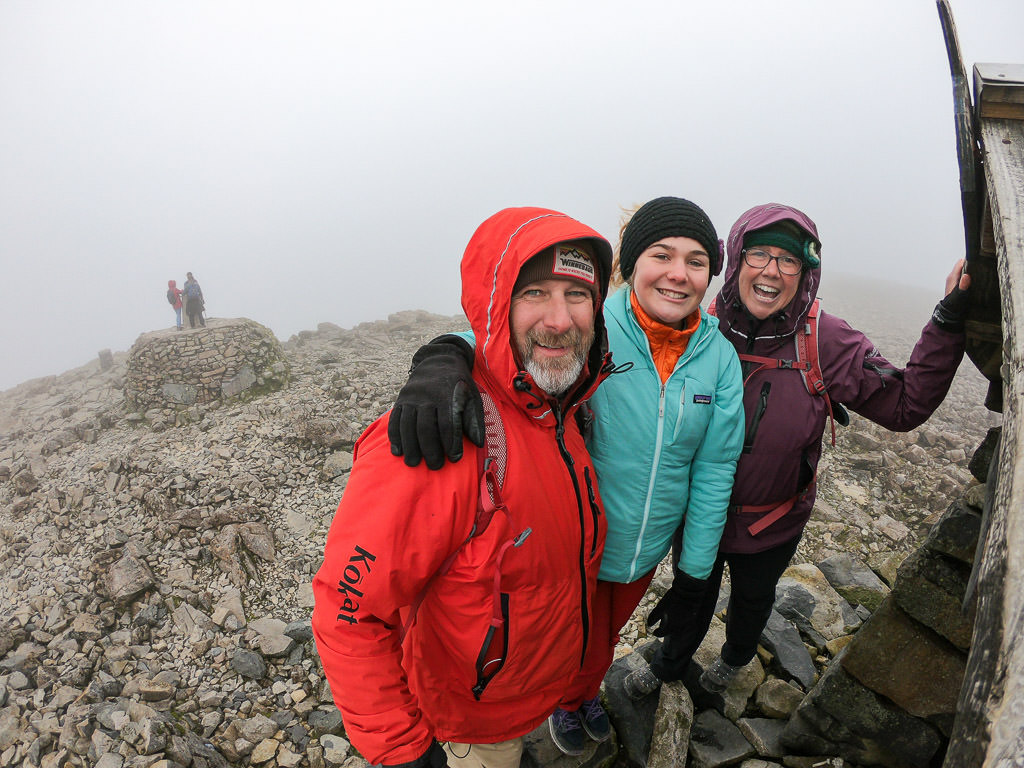 We have always been intrigued by the mountain lore of Ben Nevis (the highest peak in the United Kingdom) and couldn’t resist the opportunity to experience it ourselves.

While most of our ascent of Ben Nevis was sunny and beautiful, this peak lived up to its foul weather reputation and swallowed us in a sea of clouds just as we reached the summit. 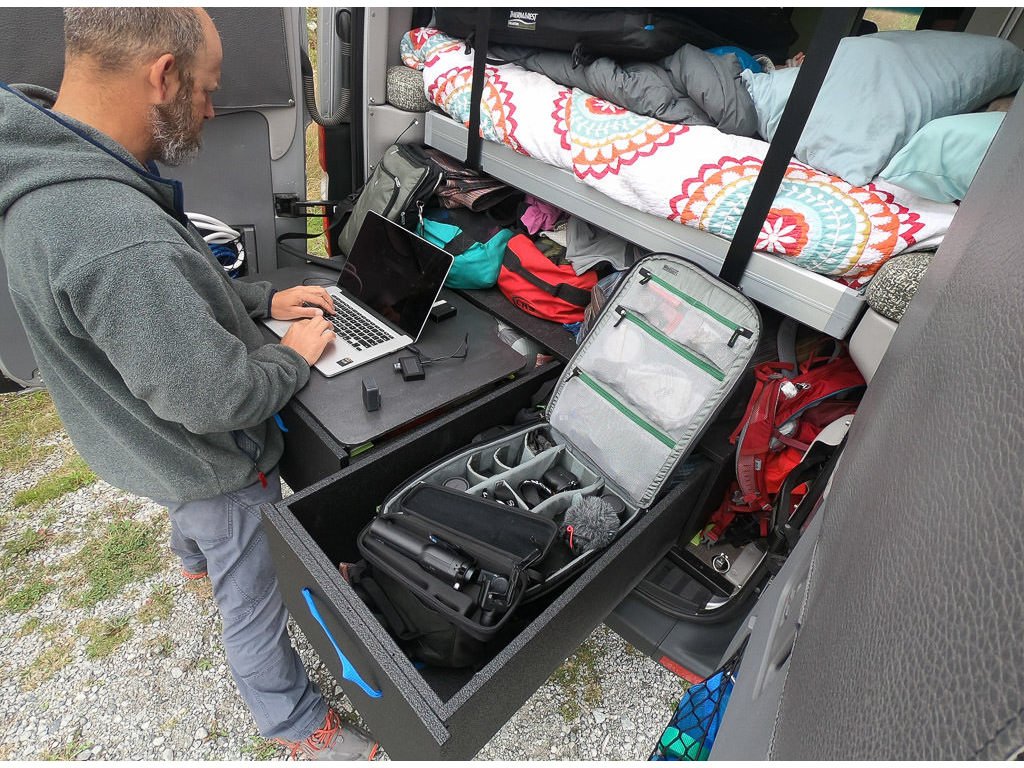 Before we left the States, we built in a drawer system in the garage area of the Revel to help us organize our gear. What we didn’t know at the time was what a fabulous workstation it would prove to be. Peter spent countless hours in his “stand-up office” as we explored Europe. 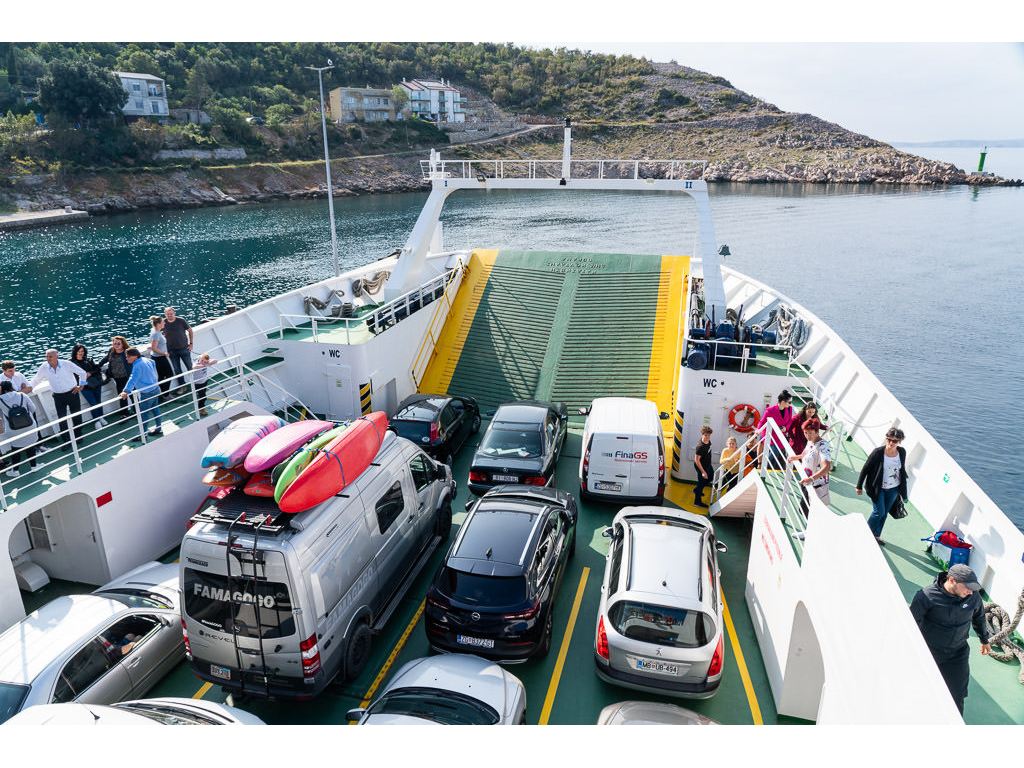 There are countless ferries across Europe, and we loved where they could take us. Here the Revel is headed to the Isle of Rab in Croatia. 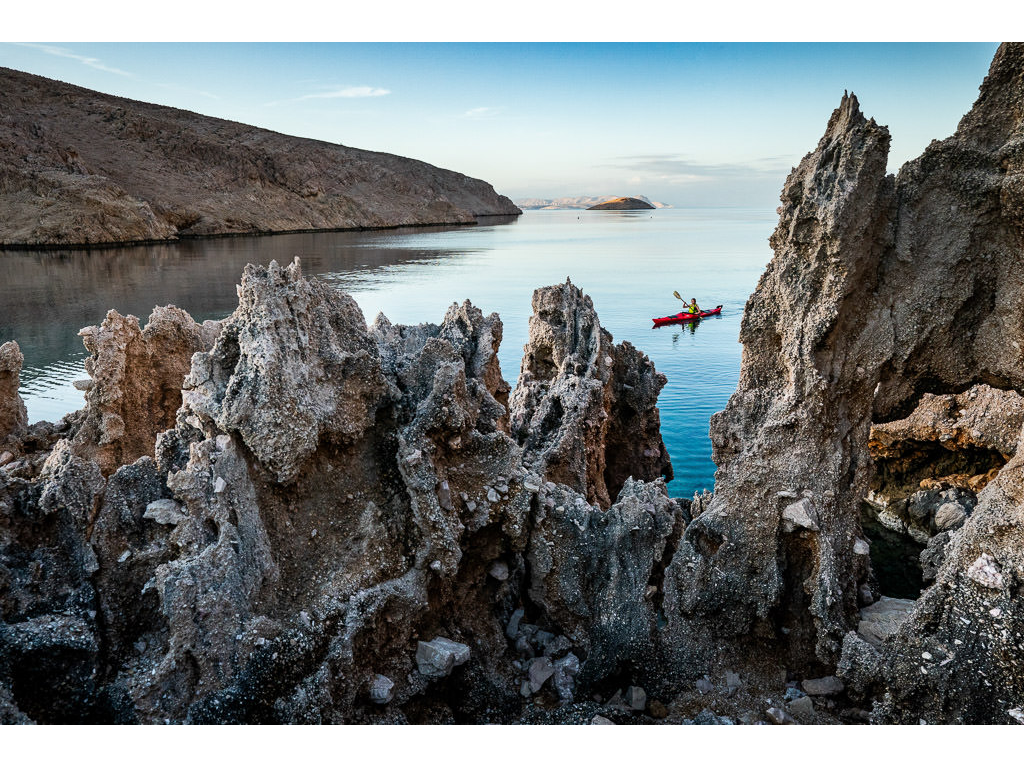 While in Croatia, we spent a week living out of our kayaks as we circumnavigated the Isle of Rab. From the crystalline waters and the surreal landscape to the wonderful people who welcomed us at every stop, this area captivated our imaginations and stole our hearts. 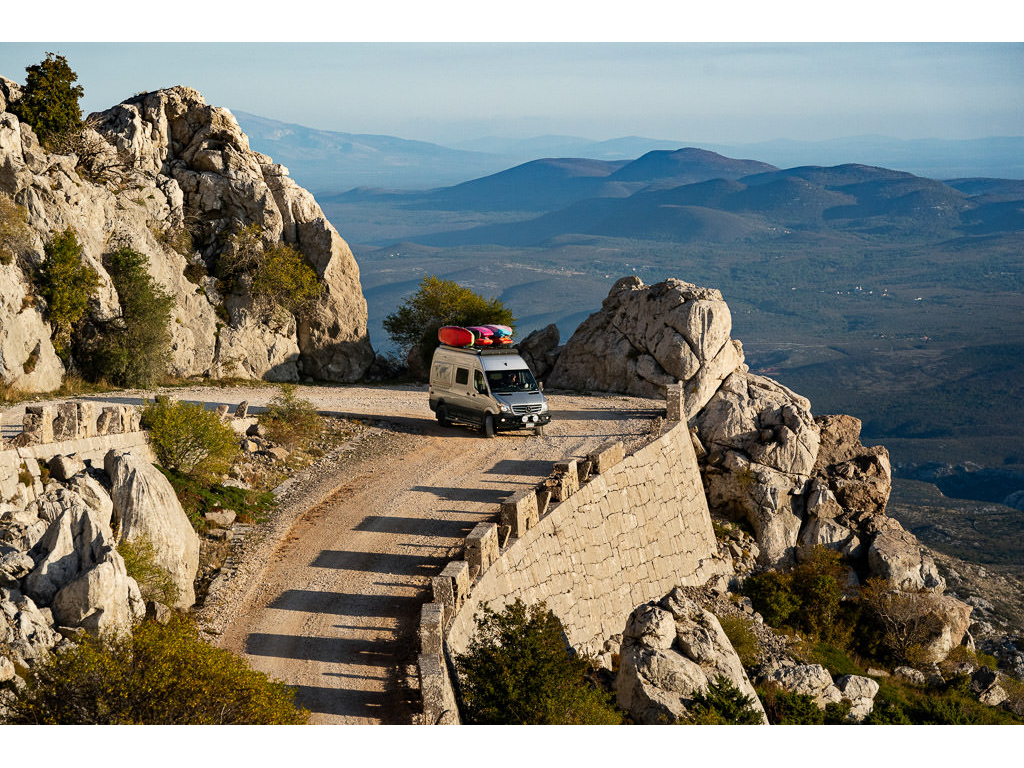 When back in the Revel, exploring the mountains of Croatia was a sobering reminder of the devastating impact of a war waged more than 25 years ago. The mountains are lined with both memorials to those lost and active landmines that have yet to be cleared from the Croatian War in the early 1990s. The people of Croatia are incredibly kind and grateful to the American people for helping them achieve their independence.

Discovering the Dolomites in Italy 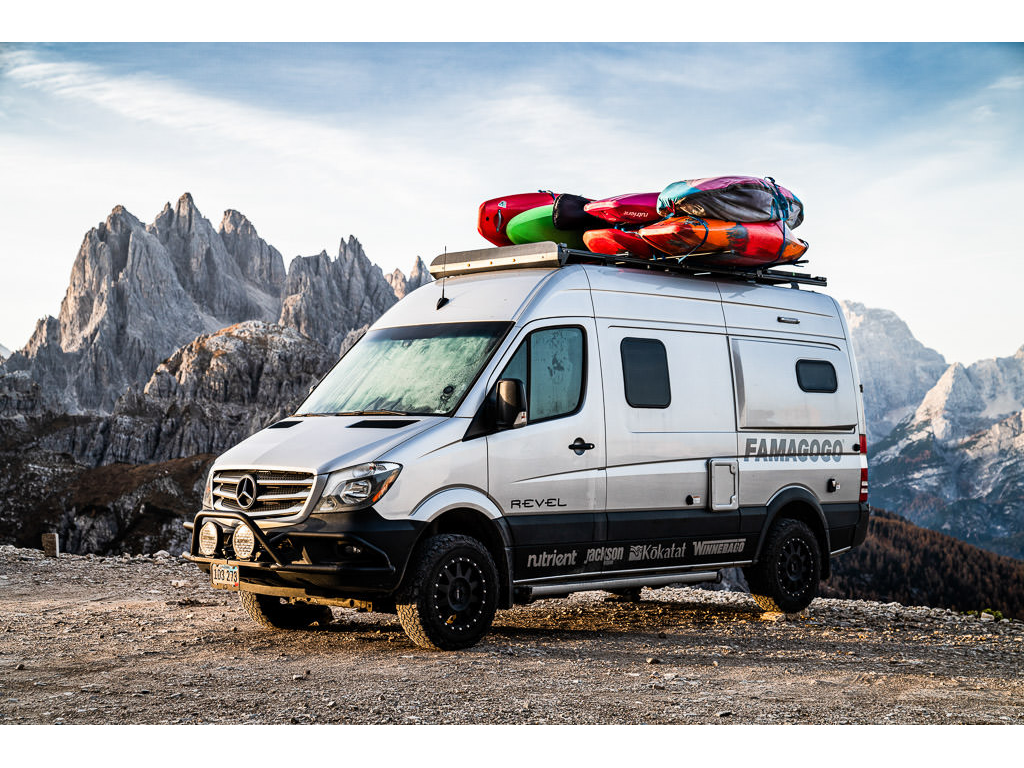 After exploring the Alps and the mountains of Norway, we thought that we had seen the most beautiful mountains of Europe…and then we discovered the Dolomites in northern Italy. 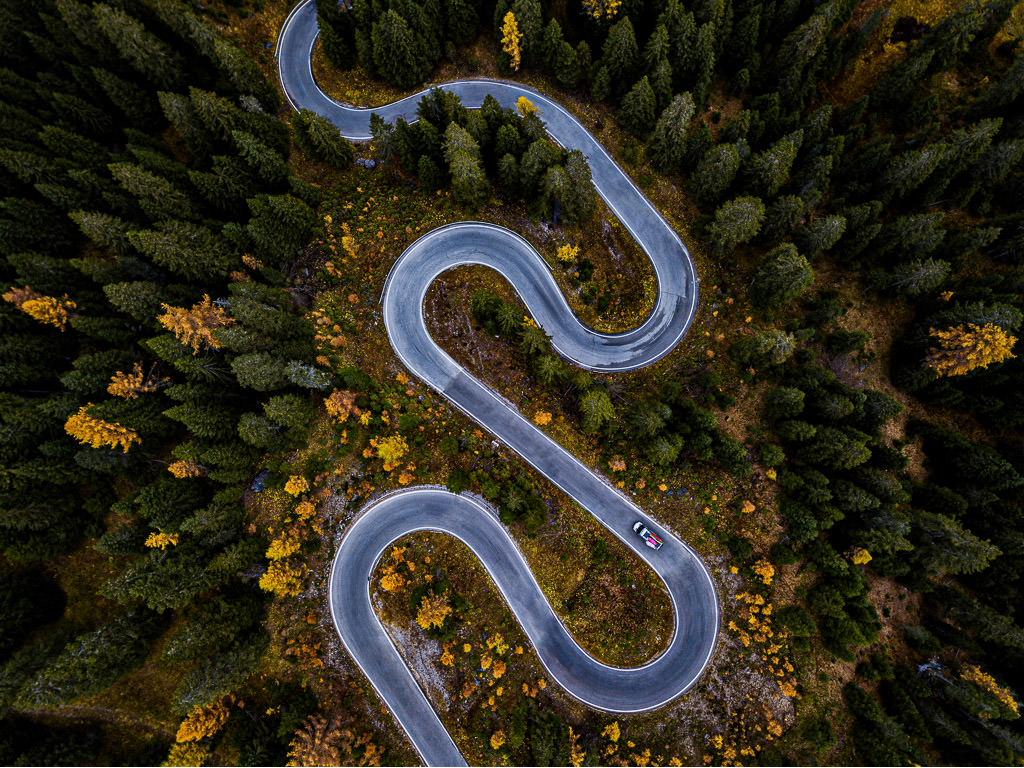 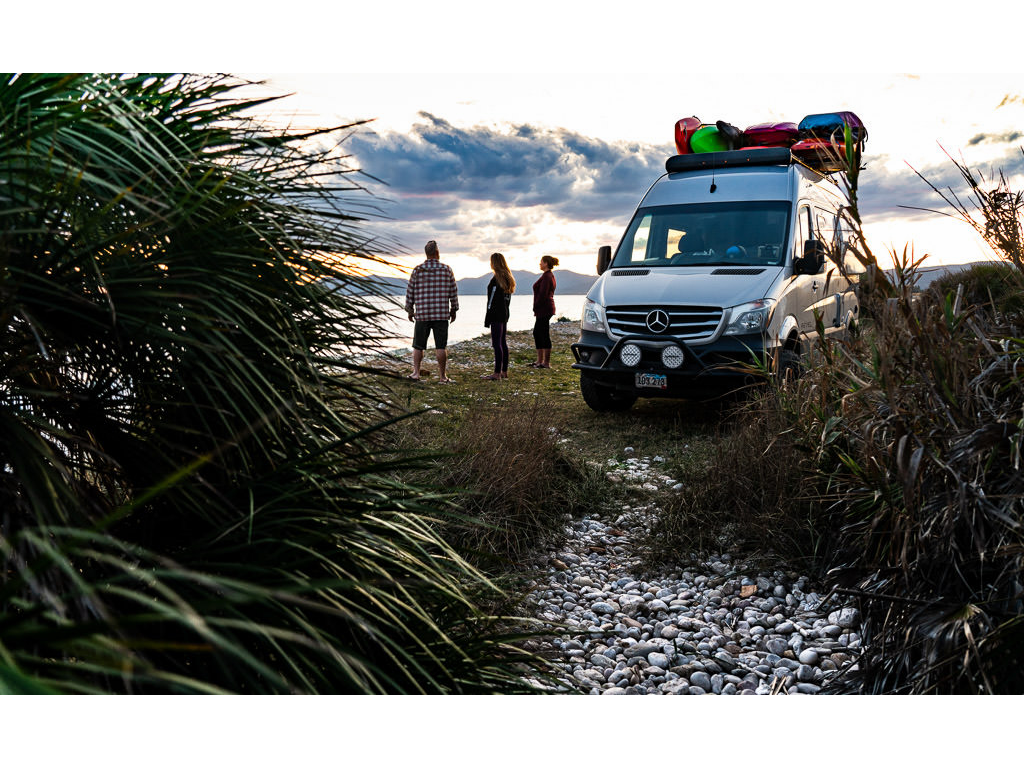 Although we were warned repeatedly about leaving our van unattended in southern Spain, the seaside boondocking was top notch. Abby loved exploring the beaches just outside of Gibraltar. 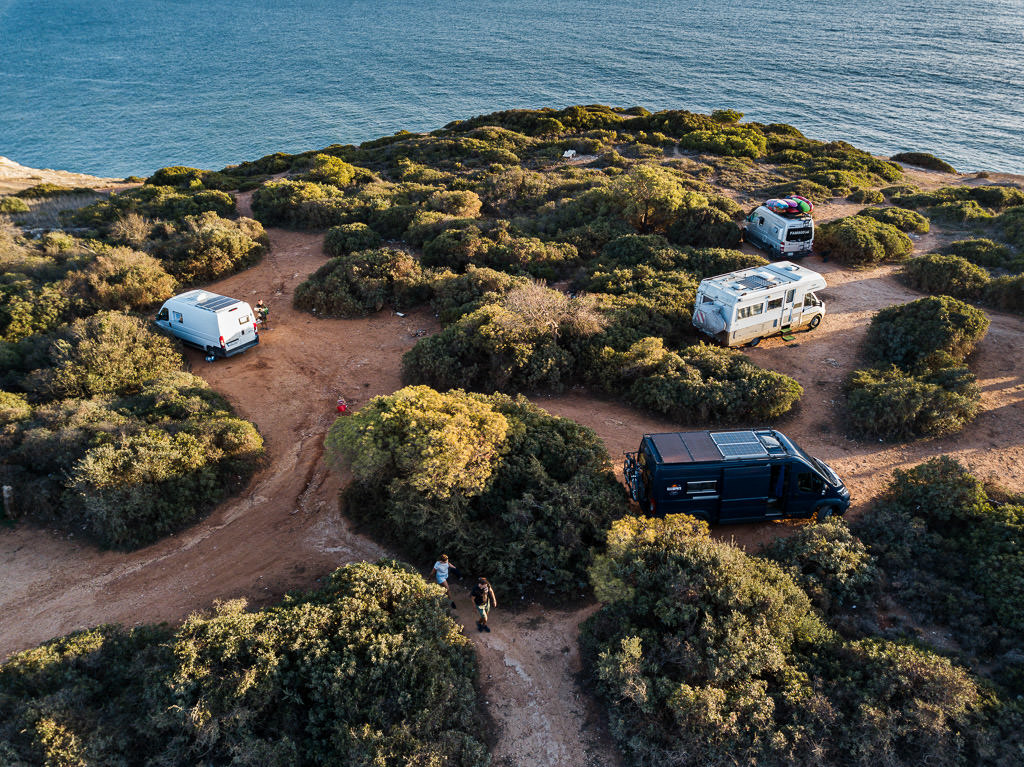 All along the coast of both Spain and Portugal were free parking areas where RVers migrated south to escape the doldrums of winter. Abby loved exploring the sea cliff formations in her kayak along the southern coast of Portugal.

After Portugal, we made our way back to the UK and shipped our Revel home from Southampton, England. Then we enjoyed a few days in London before flying back to the States to await our reunion with our well-traveled rolling home. 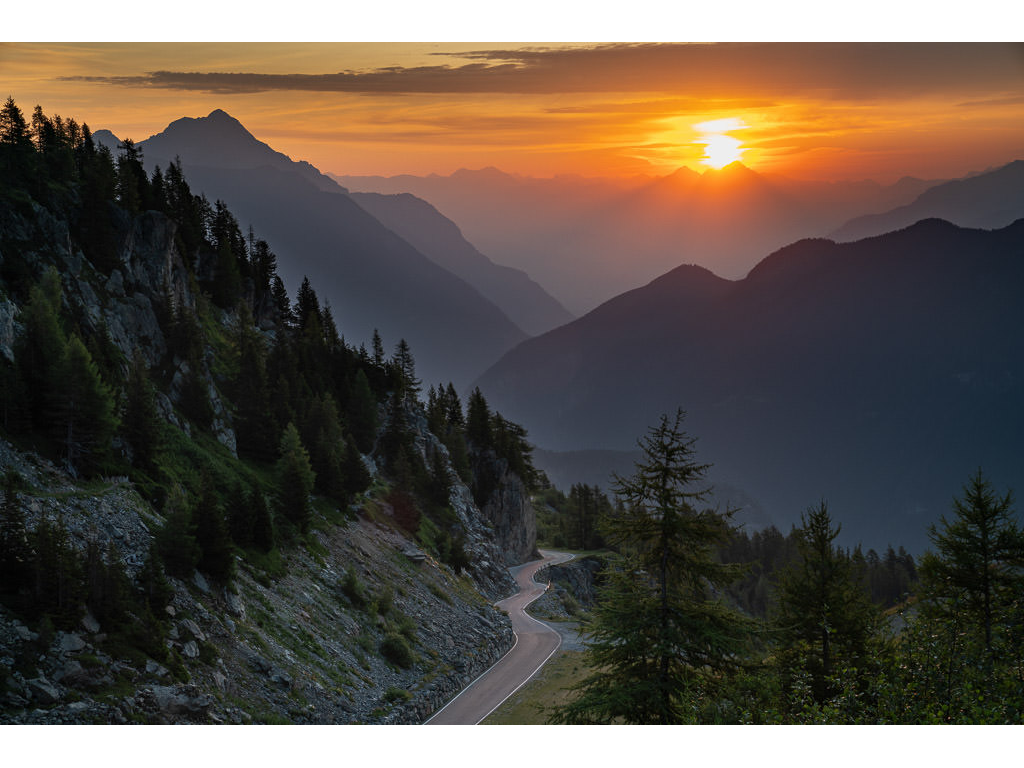 Taking a Winnebago around the world seemed like a completely crazy notion at first, and in all honesty, when we were drowning in a sea of logistics trying to pull off the first leg of our world tour, I really wondered if shipping our Revel abroad would be worth the headaches.

But after a long day navigating new cultures, landscapes and languages, retreating to the familiarity of our own home was an immense comfort. As we pulled the blinds at night, we felt completely safe and content regardless of the exotic and unfamiliar reality that surrounded us. It helped ease the fatigue that often accompanies international travel and made us feel right at home regardless of where we were parked. We weren’t quite ready to come home and cannot wait to start planning Phase Two of the Famagogo World Tour. Where should we go next?!?