What Every RVer Should Know About Hurricane Season

Beautiful beaches, Disney World, mouth-watering food, and college football attract RVers and tourists to the Gulf and Southeast every year. But every year, hurricane season also rolls around.

Visitors flying in need to double-check airline policies when planning a trip to the Southeast in the summer and fall (which also happen to be when good deals pop up). But, as an RVer, you have a unique advantage. You're on wheels! As long as you're well informed, you're free to plan a trip to Epcot's Food & Wine Festival or enjoy the beaches while the water is still warm enough for swimming. But, there are a few things to keep in mind when visiting at this time of year.

As born and raised Floridians, Jon and I have weathered major hurricanes, like Hurricane Andrew, and tropical storms. With more than 30 hurricane seasons under our belts, we've picked up a thing or two we'd like to share with our fellow RVers.

The Atlantic Hurricane Season begins on June 1st and ends on November 30th. While many people associate hurricane season with summer, the peak of hurricane season is actually from mid-August to October.

Locations in the U.S. affected by hurricane season include Florida, the Gulf Coast, the Southeast - and, as Hurricane Sandy reminded us all, the Northeast.

Storms begin their journey as tropical disturbances and depressions off the coast of Africa or in the Gulf of Mexico. When tropical depressions intensify to 39 mph winds or more, they become tropical storms and receive a name.

If a tropical storm reaches wind speeds of 74 mph, it becomes a hurricane. Once a hurricane, the storm is then categorized from 1 to 5. A category 3, 4, or 5 hurricane is considered a major hurricane.

The categories of the Saffir-Simpson Hurricane Wind Scale refer to a hurricane's wind speed. But, keep in mind hurricanes can bring lots of water and tornadoes with them, too.

In fact, a term you'll hear (and should know) is storm surge. Storm surge refers to how many feet the water will rise as a hurricane makes landfall. (Katrina's storm surge is what broke the levees in New Orleans back in 2005). 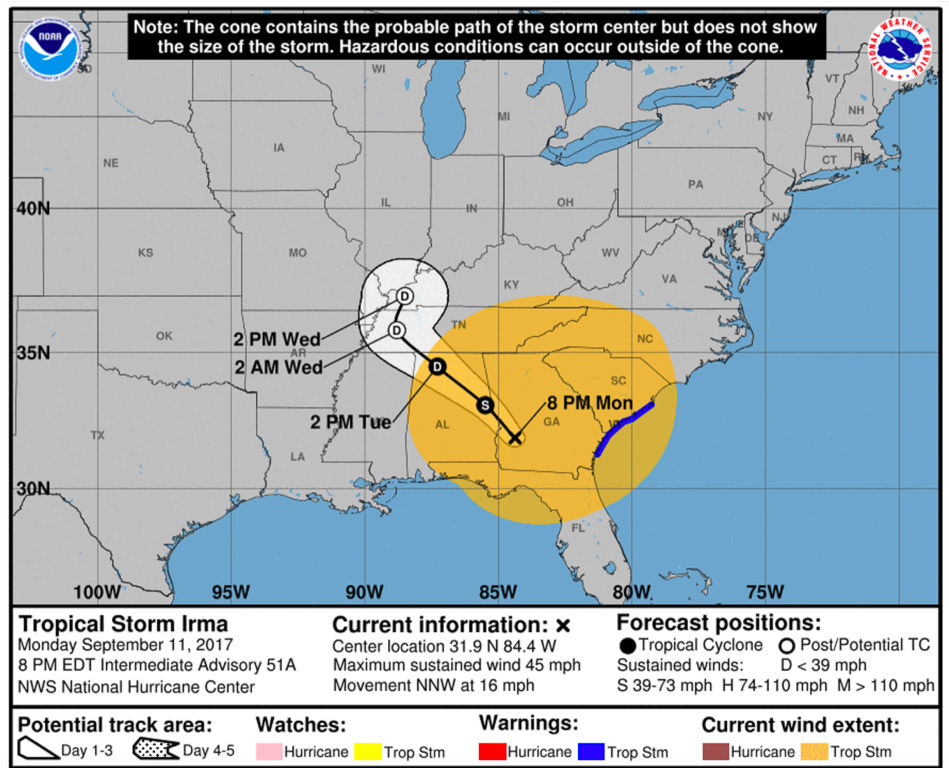 September 10th Advisory as Irma continues into Georgia as a Tropical Storm. You can see how assuming you should just head north out of Florida would have still placed you in the storm's path.

Armed with the basics, you're now ready to make sense of all the info flying around.

When Should RVers monitor storm activity in the Atlantic?

If you're in the Southeast, Northeast, or the Gulf Coast during June 1st to November 30th - ALWAYS.

I know as RVers we struggle with connectivity at times, but you should check the news and weather regularly. A storm could go from tropical depression to landfall as a named storm in less than a week.

Good places to monitor the activity in the Atlantic as an RVer are www.nhc.noaa.gov and local TV (channels, websites, and social). Some good state-specific resources are visitFlorida.com, the Texas Department of Transportation evacuation routes, and the North Carolina DOT evacuation maps.

When a storm begins to develop, it will also begin to make the headlines.

At first, you'll see meteorologists discuss the probability of a tropical depression becoming a tropical storm and the possible track it will follow. Even at this early stage, you should definitely be paying close attention as an RVer.

In addition to the high winds and wind gusts, the adverse weather conditions can include flooding, thunderstorms, tornadoes, storm surges, and rain. 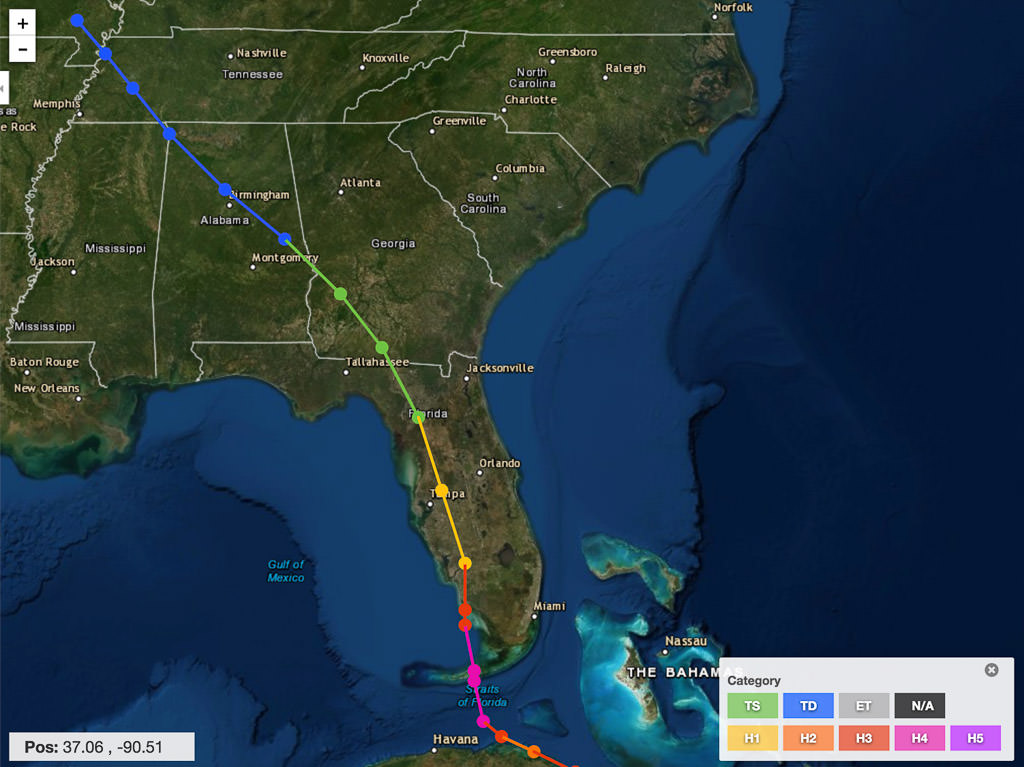 Irma's actual track through September 13, 2017. The track shows the path of the eye of the storm, not the entire area that would experience severe weather. You can also see how this storm would have "followed" you if you just assumed you should head north.

As watches and warnings go up, you'll also hear about voluntary and mandatory evacuations. It's important that you follow any evacuation orders from the local governments.

As an RVer, you should go ahead and leave even if the order is voluntary. Many times, while an order may be voluntary for locals, it will be mandatory for visitors, since visitors are often evacuated first.

Be sure not to assume that you must be by the water to be evacuated. If inland flooding is a concern, it's possible that inland areas will be evacuated too.

Throughout all of the above, you'll repeatedly see and hear about "the cone." The cone maps out the probable path of the eye of the storm. That means any area within the cone may get hit with the strongest part of the storm. You'll notice that the cone widens out as the forecast goes further out into the future.

While viewing the cone, don't assume areas outside of it won't be impacted by the storm. Remember hurricanes are much larger than their eye. 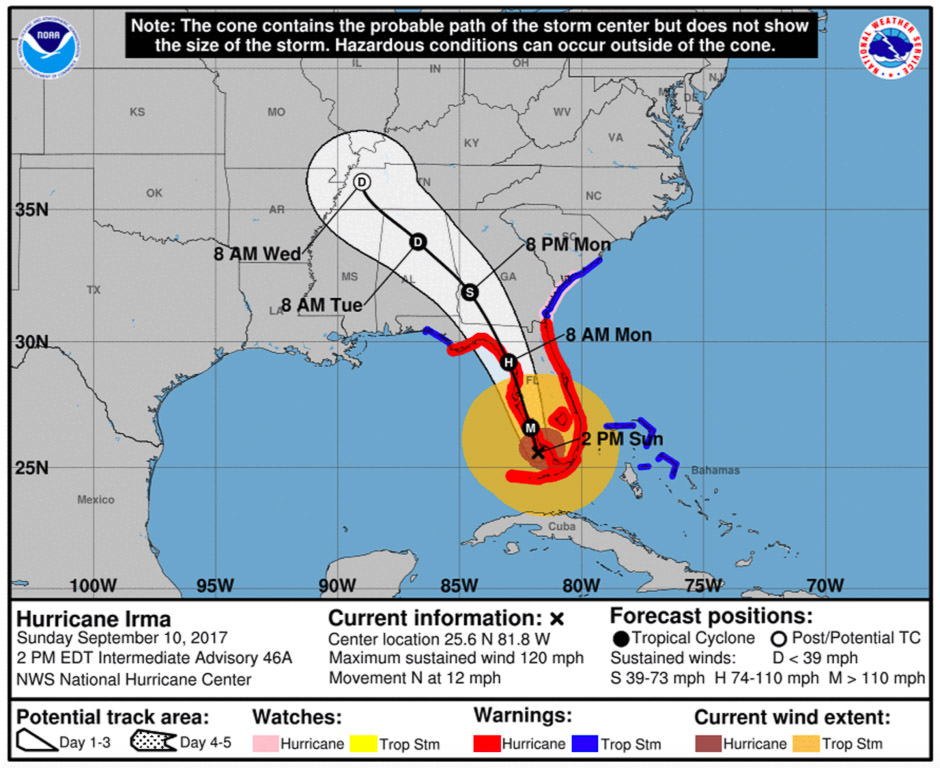 As an RVer, we recommend that you leave an area threatened by a storm early. Don't wait for watches and warnings, particularly if you are in the Florida Keys.

Locals around you will wait and see, but they'll be hunkering down in a solid structure if they stay to weather the storm - RVs are great because they're not fixed. This is the time to really enjoy that feature, since that also means they aren't as solid as a house!

Still, others may wait even though they plan to leave, but their drive will be different from yours. Leave early to account for "RV drive time." Also, remember it takes time to make your way through Florida.

For example, to head west out of Florida, you generally take I-10. If you're down in Key West, it's roughly nine hours to get to I-10. From there, it's at least another four hours before you hit Alabama. And neither of those time estimates account for extra drive time as an RVer.

Also, keep in mind that waiting may mean you'll face congestion, gas shortages, or long lines at the pumps. 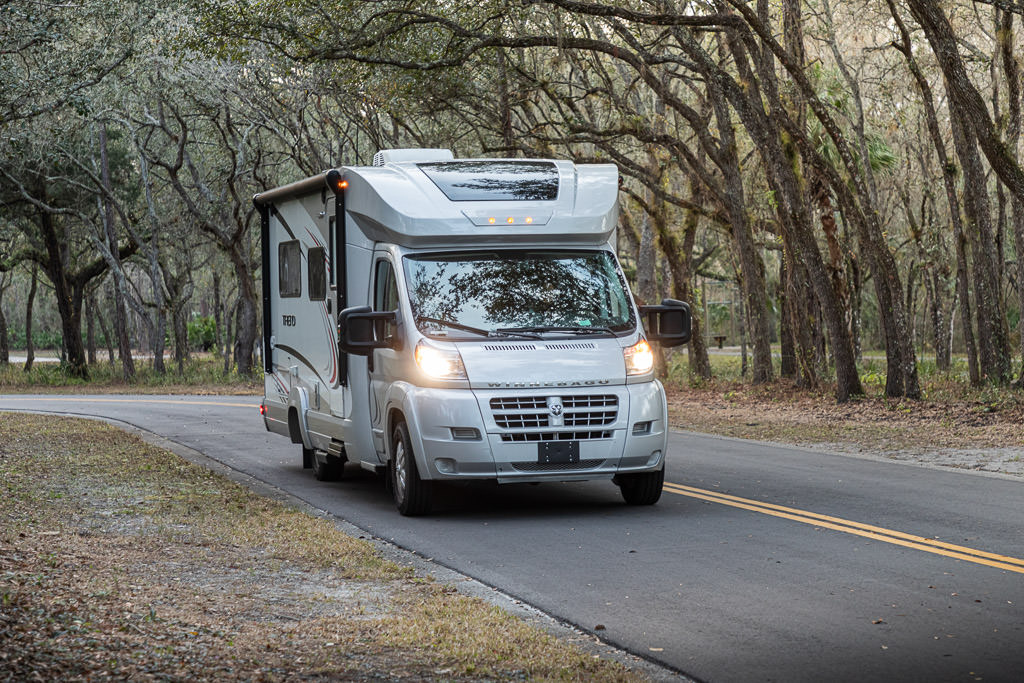 You'll hear locals around you say things like "it's just a tropical storm" or "it's only a Category 1". News outlets will caution against that line of thinking because there's more to the storm than just the winds, which is what the categories are based on.

For RVers, it's even more important not to fall into that frame of mind. We know RVers who were camping in Georgia, where 2017's Hurricane Irma traveled to after Florida. Though Irma had weakened to a Tropical Storm, the storm caused downed trees and power lines at their campground. A tree fell mere feet from their camper! Luckily, it fell far enough away. But as you can see, an RV is no place to be during a tropical storm.

Don't Stop Too Soon or Assume

If you're leaving the Gulf Coast area or the Northeast, you'll head west. Head west far enough, and you're in the clear.

The Southeast can be a bit tricky because the storm could follow you. Here, be sure to carefully listen to what forecasters are saying.

From Florida, and other parts of the eastern seaboard, don't assume you just want to head north.

Remember our friends were caught by Irma in Georgia. Others stopped too soon and were caught by Irma in Orlando. In fact, during Irma, many people went north only to be caught by remnants of the storm in other parts of Florida, Georgia, and Tennessee. Meanwhile, we did have some friends that went west to Louisiana and were able to make the best of the situation in nice weather.

Keep up to date with the forecasts to help with your route planning.

Routes Out of Florida

If a storm threatens the Keys, it's only a matter of time before everyone is evacuated. You'll want to head out early because the only way out of the Keys is US-1. Once you're back on the mainland, most people will head north either on I-95 or on Florida's Turnpike (which becomes I-75 north of Orlando). However, you might want to try the much-less-traveled US-27 and then connect to US-441.

In general, when leaving Florida, you might want to try using the U.S. Routes rather than the Interstate Highway System roads (think I-95, I-75, etc.). On google maps, click on "options" and select "avoid highways". On a map, look for those roads marked in blue rather than red. 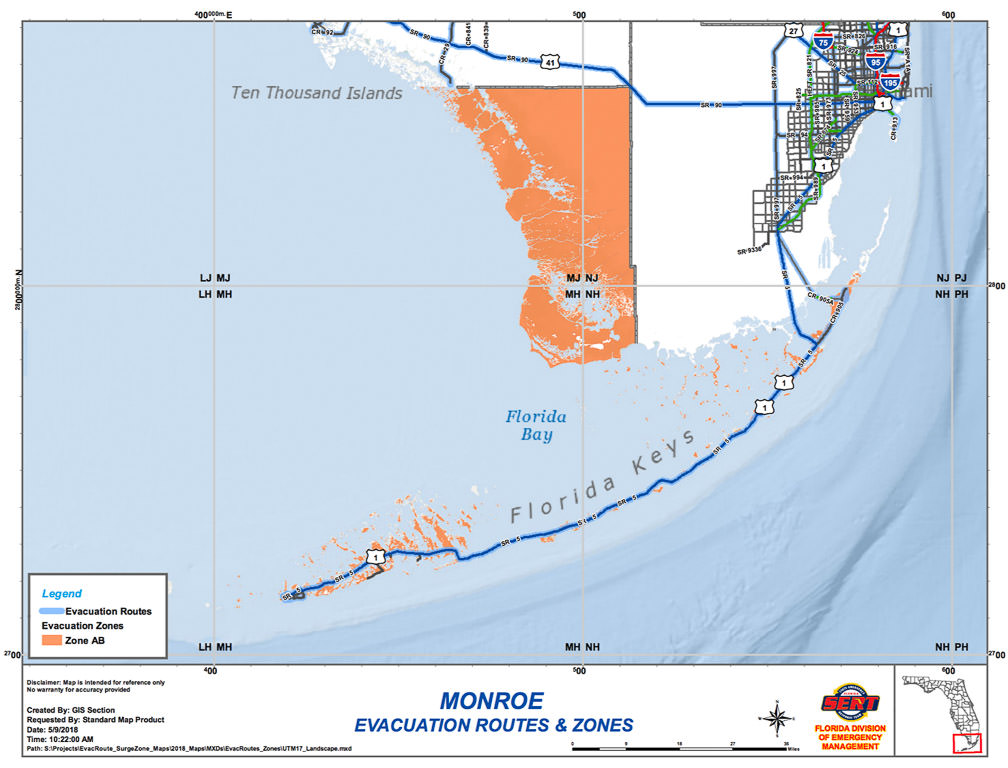 As you can see, evacuation routes out of the Florida Keys are very limited. The Interstate Highway System roads (in red) will be busier. You can try using the US Routes System (or blue highways) to avoid congestion.

After a storm passes, travel could be made difficult by flooded roads, power outages, non-functioning traffic signals, debris, and downed power lines. You'll also see many campgrounds near affected areas fill up.

After Hurricane Michael hit the panhandle last year, many of Florida's state parks and even Disney World's Fort Wilderness were at full capacity. Residents severely affected by storms will take refuge in their RVs at campgrounds while their property is secured, restored, or amenities like water and electricity are restored.

Though this hurricane season is projected to be a busy one, now you'll be prepared to visit and adjust your route if needed. Have you ever traveled through the Southeast or the Gulf during hurricane season? Let us know your experience in the comments!