Uncovering a Photo Mystery in the Desert Southwest

In our RV travel life, we've spent six years and over 80,000 miles traipsing across the continent. Typical of many RV travelers, we've collected our fair share of National Parks and must-sees. Some places we have returned to, that I first saw as a child, are at once both nostalgic and new, through adult eyes.

Increasingly our destinations are less driven by bucket list check-offs, and more by whimsy or serendipity. And it was a little of both that led us on a forensic expedition into one of the least-visited areas of the desert southwest.

Meet my mom and dad: Julie (Julius) and Hermine. Both of them died some years ago and, as an only child, I became the de facto preservationist of the family movies and photos. I spent the entire summer of 2018 digitizing a priceless treasure lode of over 12,000 images and documents and scores of hours of home movies.

When my dad died in 1992, I put together a slideshow memorial of his life with my mother and I came across this picture. 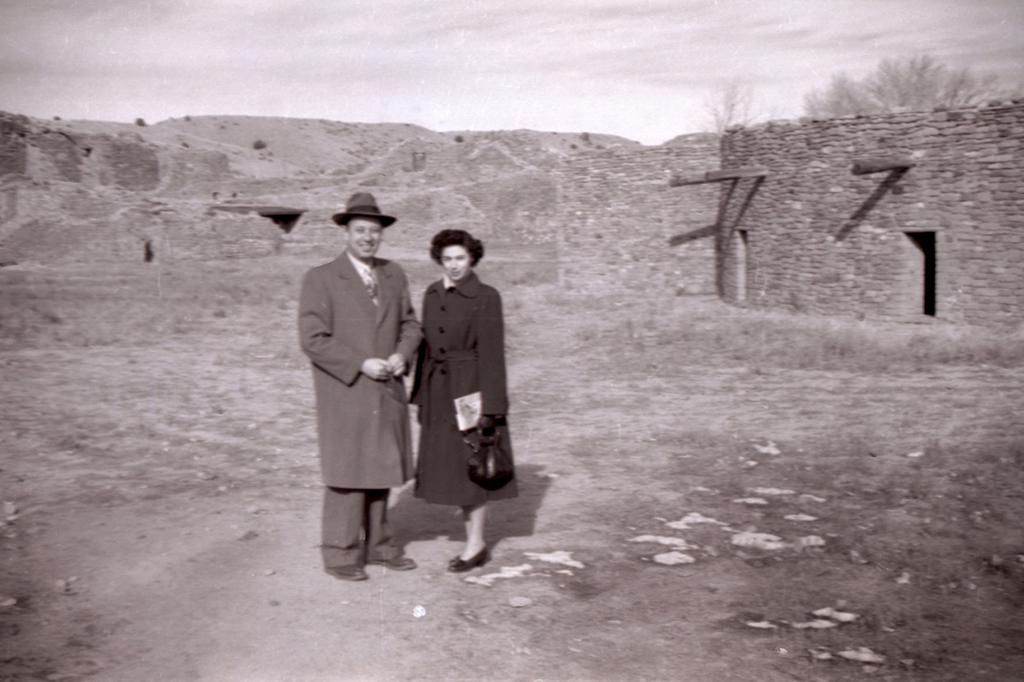 Twenty-six years later I rediscovered the small snapshot again. From accompanying images I know that the year was 1948. As a post-war ambition, my parents moved west from New York City to settle in Denver a year earlier.

I really love this picture. What fascinates me is the formality of their dress against the backdrop of some type of southwestern ruins. I suspected that this was one of Dad's first trips working as a clothing manufacturing rep. Years ago, I sort of chalked it up to being at the Taos Pueblo. However, as I was studying this, and the other pictures in a paper photofinisher's envelope, I knew it wasn't Taos -- the Taos pueblo walls are smooth and these are stacked rock.

I studied this and the other photos very carefully. I looked at the hills, the cottonwoods in the background, the vigas coming out of the building, the square doors. Oh, and let me take a moment to comment on their travel attire. 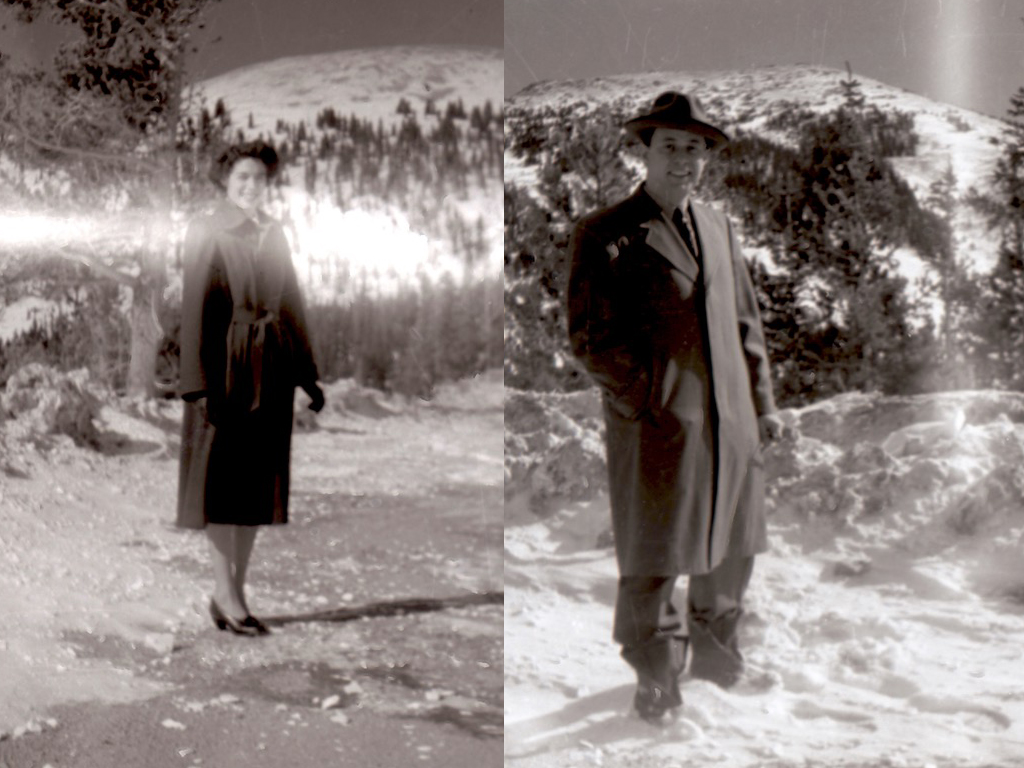 While people certainly dressed to "go downtown" in those days, I don't think this was standard "road trip" apparel. My hunch is that Dad was seeing customers in the area that day.

Here's another one that's a bit blurry, but interesting in that shows more of the ruins. This got me thinking more about Anasazi and Chacoan cultures. 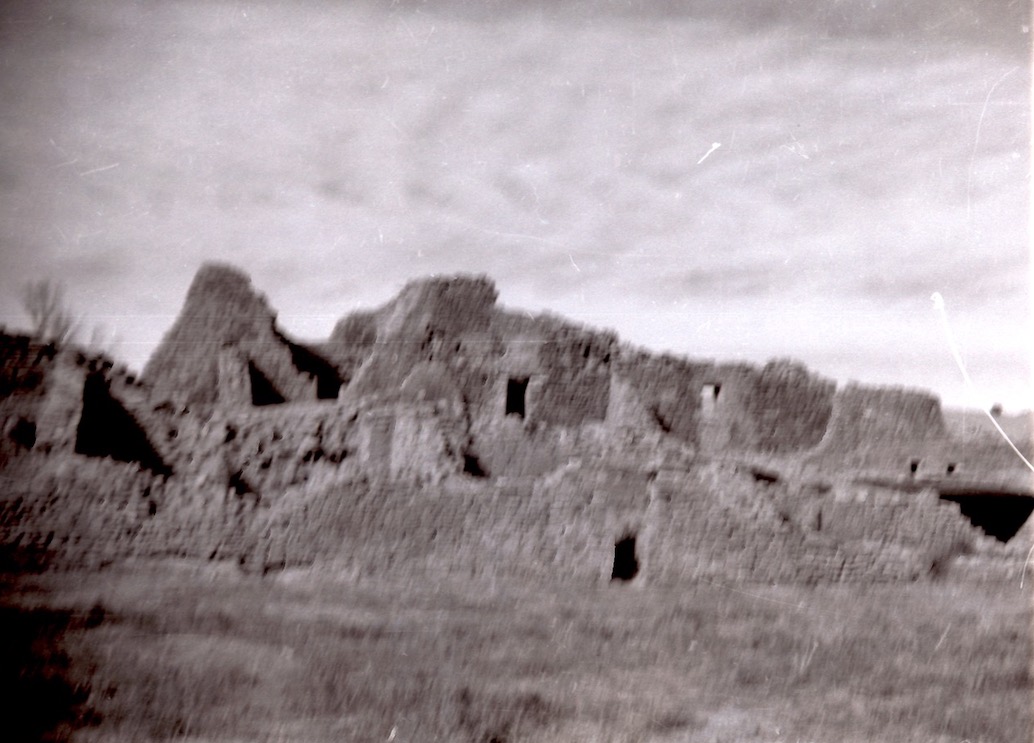 In this same collection of photos were a few more. It had to be a southern trip from Denver and, most likely into New Mexico.

This partially double-exposed photo matches up perfectly with the view from Wolf Creek Pass looking down on Pagosa Springs. The freeway system had yet to be built, and it made sense that the folks would travel on US Highways (in this case US 160).

These images definitely confirmed they were on a Southern Colorado/Northern New Mexico trip. But where was that photo of the two of them taken?

I started looking at a map of the four corners region. Using Google, I put in keywords for pueblos and chose to filter by images (I use this feature a lot). I looked at Chaco Canyon, but the configuration of the structures didn't match. I then thought of Hovenweep and found a picture that, for a few days, seemed in my mind to be a possible match. However, I was still struggling with the background topography.

One night, around midnight, scanning thumbnail images of a Google search, one of the images that came up in a Hovenweep search looked interesting. It took me to the ruins at Aztec, NM.

Back in the late 1990's, I was the CEO of a high-tech company that became the first to commercially plot locations on a map (ATMs for Visa). It was all so miraculous, even with slow connections, the paucity of information, and clunky interfaces. Fast forward into the late teens of this new century, and I sat in the glow of my Mac reviewing satellite images like a Tom Clancy CIA analyst hunting down the enemy.

I used Google Maps to pinpoint Aztec. These days, Google Maps is so powerful that when you search for a specific location, you can also see related photos (and a lot of them are 360-degree navigable). This is the photo that piqued my interest. Very close. A definite possibility.

I then clicked on a navigable picture. It was a walk around a big Kiva. 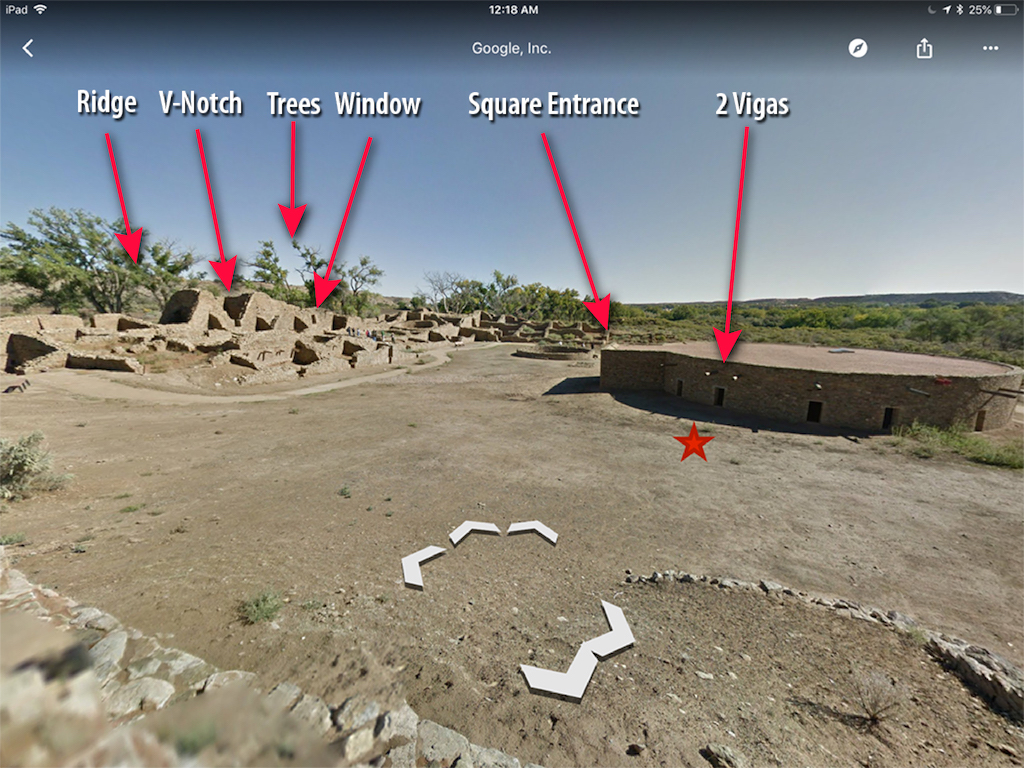 Bingo! It all snapped into place. The barren hillside behind the ruins match, as do the cottonwoods. The confirmation of the steep ruins matches picture two. But the true triangulating moment comes with the vigas on the Kiva. Look at the doorway above the star. There are two vigas above that door. Then look at the square entrance to the kiva, just to the left of it. The star is close to where they were standing.

Now, go back to the Julie and Hermine's photo and you'll see these elements all aligned in the photo. Going back to the first picture it all fit. 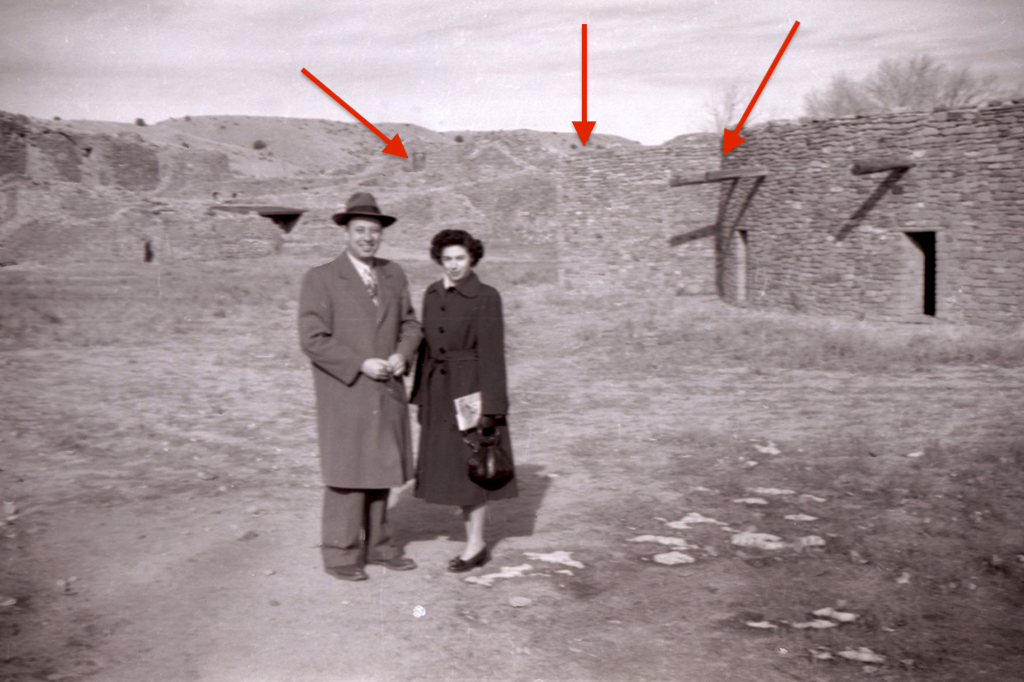 They either came south or headed north into/out of Colorado from Durango. Aztec is due south on US Highway 550. That would have been the main route back then.

And this is how our next trip began. I immediately started looking at routing options and using the AllStays app checking out RV campgrounds.

When we approached the front desk at the visitor's center, I asked the ranger if we could walk anywhere on the grounds. He smiled and politely explained, "Well, we ask that you stay on the marked paths." I slid an enlargement of the photo across the desk and said, "I'd like to take a photo on the same spot my parents stood, seventy years ago."

As he looked down another ranger sitting behind him leaned forward, they both smiled and the first ranger looked up, "Wow. That's really cool. Go ahead, I'll let the other rangers know that it's okay." 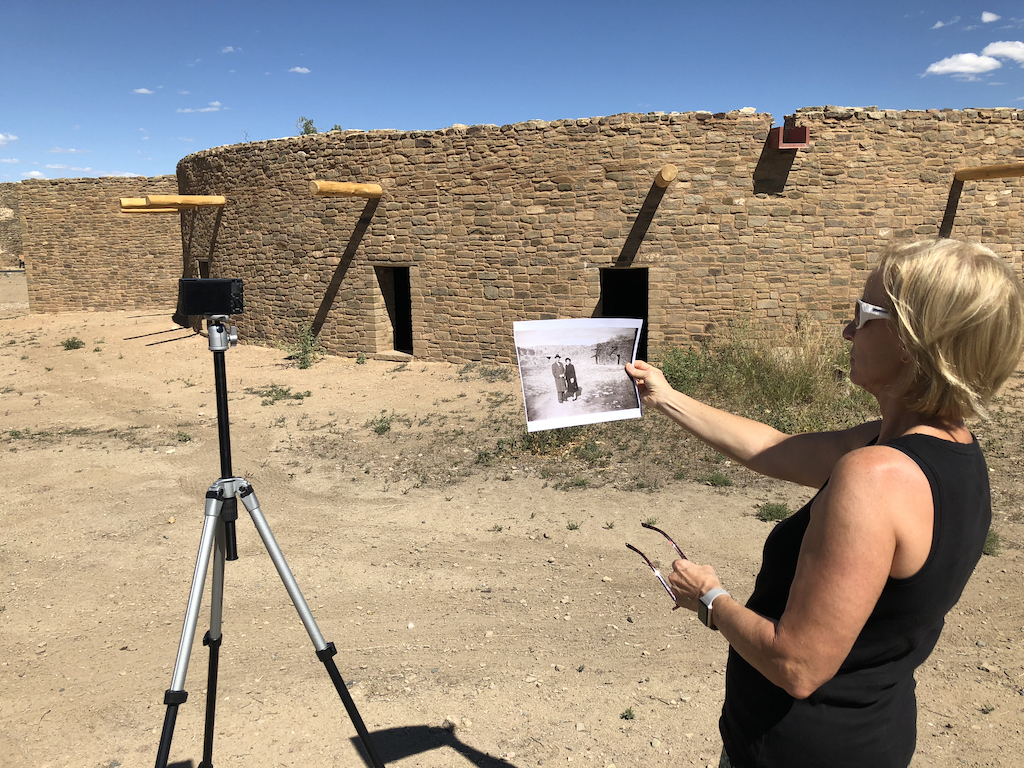 Holding the old photo as a reference we made a rough guess of where Julie and Hermine would have stood. Then, with the camera on a tripod, we shot several self-timed images.

I could tell from my folk's picture that they had visited the ruins in very late winter and in the afternoon. Seventy and one-half years later, we were there at the autumn solstice - also in the afternoon. The angle and the shadows are fairly close. And look at the cottonwoods in the background. They weren't there 70 years ago.

Compared to the photos, movies, and stories of my parent's travels, I sometimes feel like we're players in a science fiction movie. From that day in 1948, before the federal highway system, before motorhomes, before GPS screens in cars with real-time traffic updates, before a smartphone that has more power than all the collective computers in that post-war world, and before an image could be captured digitally and sent instantly to anywhere on the planet, my parents had the same sense of adventure and discovery. Twenty-three years later, they would buy their first motorhome. And in twenty more years, travel 200,000 miles throughout their adopted homeland of the Rocky Mountain West. And as Terry and I roll along in their tracks, sharing their same sense of wonder, they are with me always.

Travel Tips for the Desert Southwest

The desert southwest and RVs were meant for each other. There are lots of boondockable opportunities. And also plenty of dusting and vacuuming of the desert dust.

Within the four corners region, the BIG attractions are Mesa Verde National Park and Monument Valley. And then there's the B-list which are harder to get to, but arguably equally as impressive and fascinating. Those include Goosenecks of the San Juan, Hovenweep, Canyon DeChelly, and Chaco Canyon.

In returning from southern California to Colorado, we knew we needed to wind up in Aztec. (Aztec got its name when early settlers mistakenly assumed the ruins were built by the Aztecs from Mexico. They weren't. It was the Anasazi people who populated in the area roughly between 500 and 1300).

Our route would take us off of I-40 and north from Gallup, New Mexico, to Durango, Colorado. In between was a long desired and hard to get to destination, Chaco Canyon. Chaco is totally worth it. Unlike the cliff dwellings in Mesa Verde, Chaco is built on the valley floor and some of the original buildings go up four stories. Definitely take the time for a ranger-led tour. It's a graduate course on Puebloan anthropology.

Whether you come in from the north or the south, there are 20+ miles of dirt road, and we found the northern road to be annoyingly washboard-y. It's nearly 40 or more miles for any services near the Chaco visitor center, but there is a campground. I wouldn't recommend it for Class A's, but B's and C's who are happy to boondock for a day or two will be fine. Your stay should be rewarded by a light-pollution-free canopy of stars.

If you have a tow car, the best strategy is to leave the rig at the campground and do a day trip to Chaco. There are a variety of campgrounds north of Chaco off US 64, between the towns of Farmington and Bloomfield. To the east of Aztec and Bloomfield is Navajo Lake State Park where there are lots of camping and water opportunities (including high-quality fly fishing on the San Juan river).