One unintended surprise of the early summer purchase of our Specialized Turbo S e-bikes is that suddenly every RV adventure took on a new aspect of places we could explore on two wheels. And while an e-bike has given us a youthful boost of speed and range, these adventures are still equally wondrous on regular bikes and they're not particularly hard.

We had planned to meet friends for a four day trip on the Salmon River in Idaho over the Labor Day weekend. For a change we left our Ford Focus tow car at home and took the bikes in search of riding adventure before and after the river trip.

On our way to Lewiston, Idaho we stopped to visit fellow Skinnie Winnie owners who live in Boise. Quite conveniently our friends' home was just a block away from a scenic paved bike path that followed the Boise river four miles into downtown. Boise is truly a small city gem of the American west and riding along the clear, cool water of the Boise river on a late summer day was glorious. Our tour guide and host, Tom, took us to various city locations on or near the bike trail. 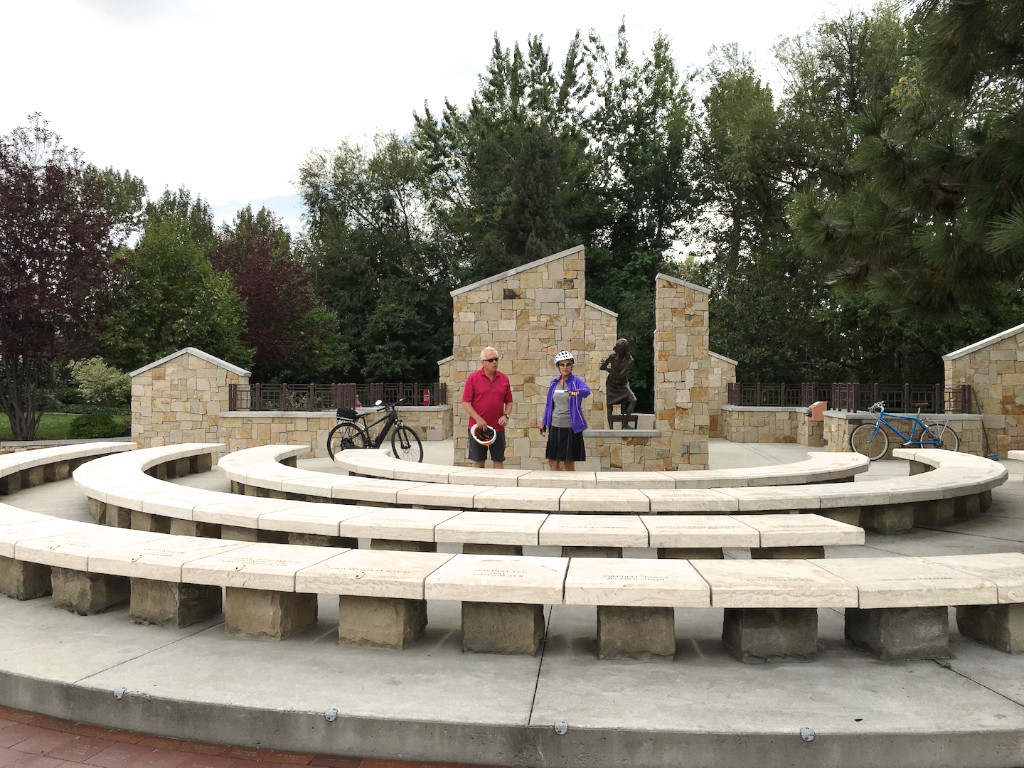 Terry and Tom examine the Anne Frank memorial right on the bike path near downtown Boise.

Lunch was at a local sandwich place that, without insider knowledge, we would have driven by as some place unremarkable, but the sandwiches were anything but. After lunch, we rode about 200 feet right across the alley to the Cinder winery for an hour or so of tastings and, well, a few bottles for the back of the bikes. It was delightful and a great way to experience Boise, yet this urban adventure was only a small warm-up for the two outstanding rides that were yet to come.

After the river trip we drove a couple of hours to the south end of Lake Coeur d'Alene. The lake is huge and we were still thirty miles south of the town of the same name. We had booked two nights near Plummer, Idaho at Heyburn State Park and had chosen this location because of it's "right next door" proximity to the Trail of the Coeur d'Alenes rail-to-trail. 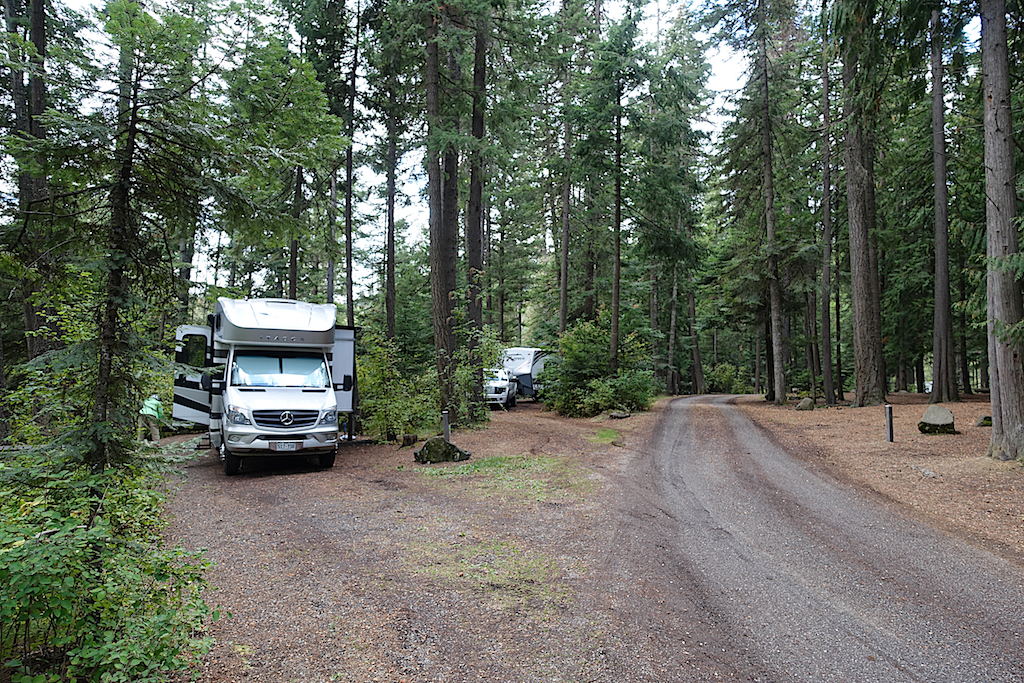 A very quiet site at Heyburn State Park. There are some big pull through sites, too. You can see that having leveler's on the Navion helped. . .a lot.

This is a 72 mile long paved path that edges the south end of the lake along an abandoned Union Pacific grade. Before the railroad, miners used steamboats to move ore across the lake. When the railroad was finally constructed a lot of mine tailings were used to create the rail bed. 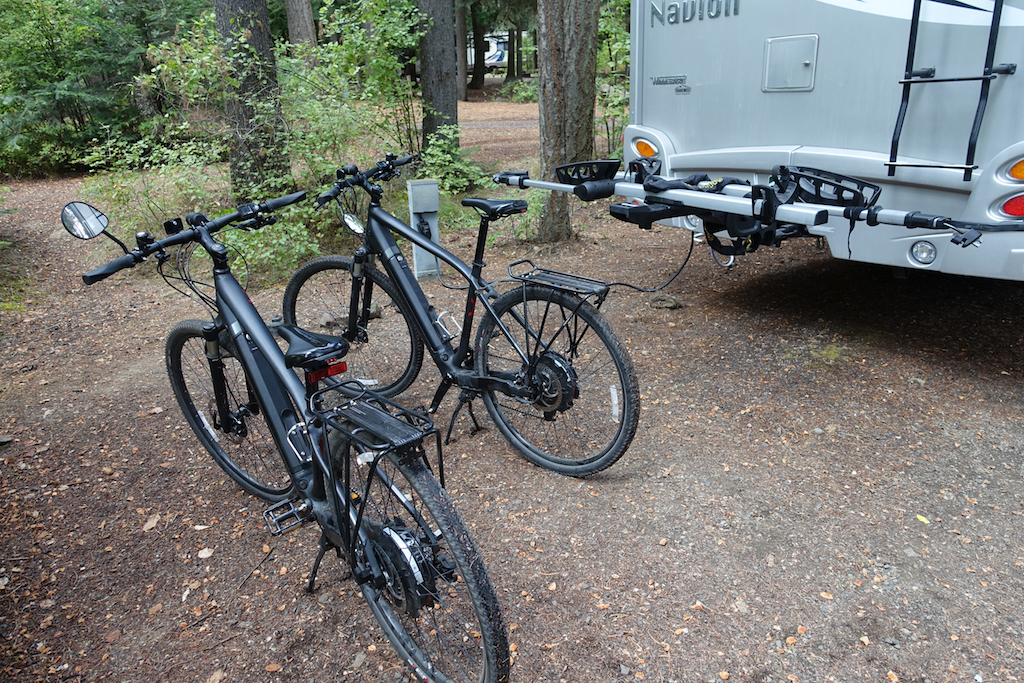 Ready to roll. The Specialized Turbo S bikes stayed secure throughout the trip with our Thule T2 Pro rack.

Decades later, with more exact environmental concern, it was determined that a lot of the railroad grade bed had tailings with long term low-toxicity. That's where a pretty brilliant idea was cooked up to leave the tailings in place, but stabilize them by paving over the grade. Hence an unusually long paved rail-to-trail path. 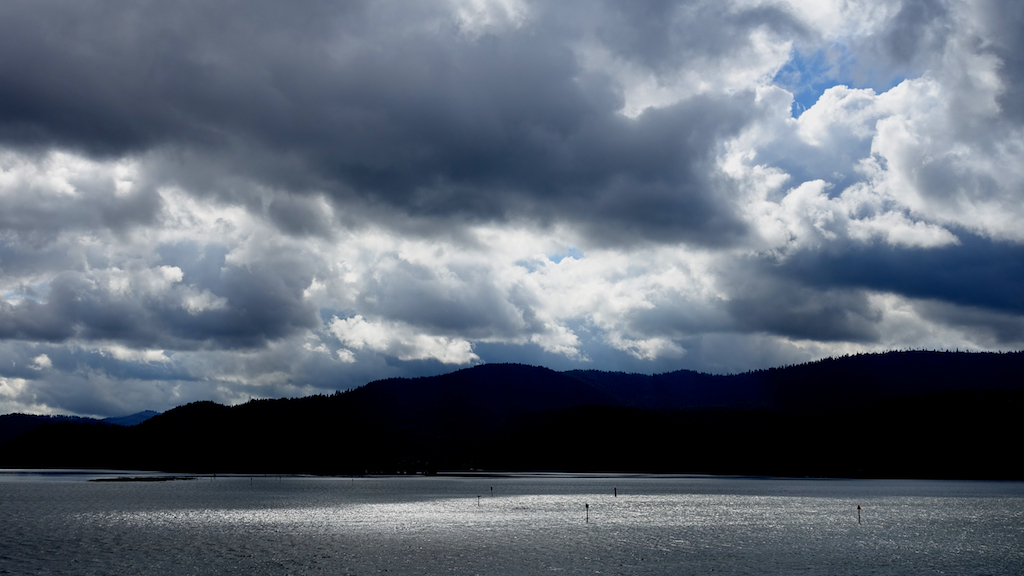 A late summer storm front had passed through the day before, but still lingered on when we rolled onto the path. Fortunately, everything had dried out and what was left were cool temps and mostly cloudy skies. Actually, that made perfect biking weather. 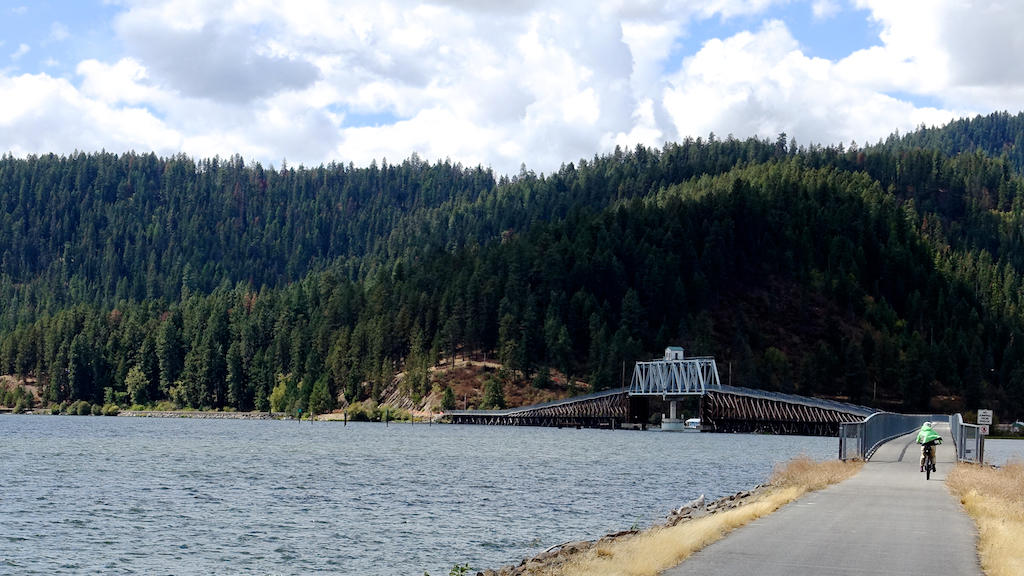 About a half hour ride from the Navion we arced up and over the historic Chatcolet Bridge to the east side of the lake. Like the entire trail it is a bikes only route so we could stop for plenty of picture taking without interruption. A couple of miles beyond, as we continued to edge around the lake, we came upon a collection of apple trees ripe with fruit. We picked a few small ones for an immediate late morning snack and a few to return back to the Navion with. 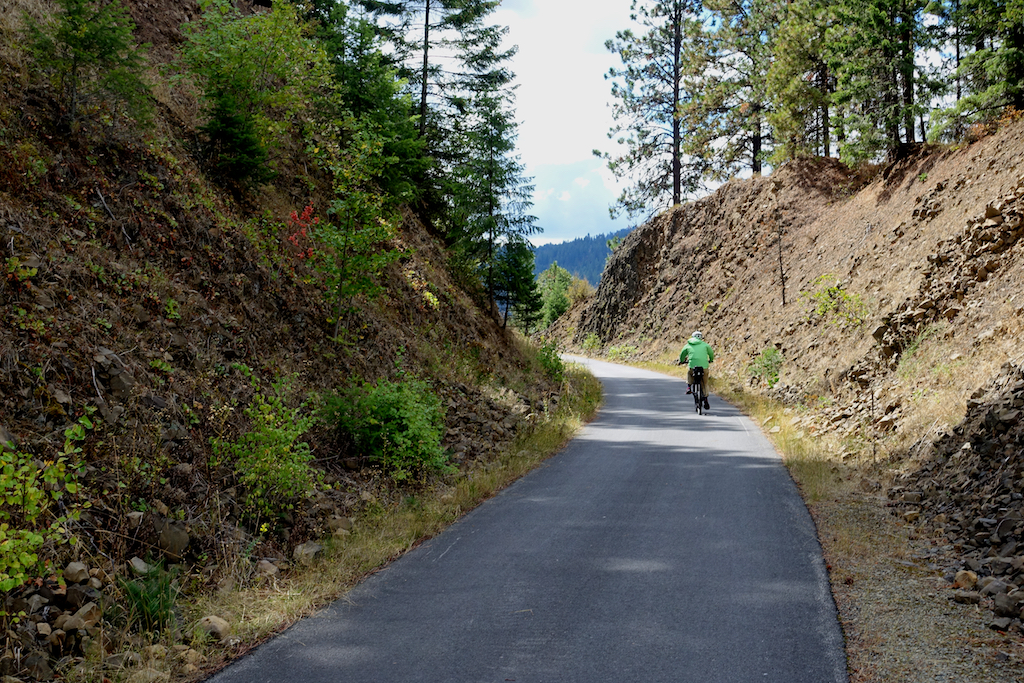 By the time our trip odometer came up at 15 miles we had rolled east away from the big lake and through a chain of smaller lakes that were on both sides of the Coeur d'Alene river. Now we could enjoy a return trip with all the scenery behind us now freshly in front. 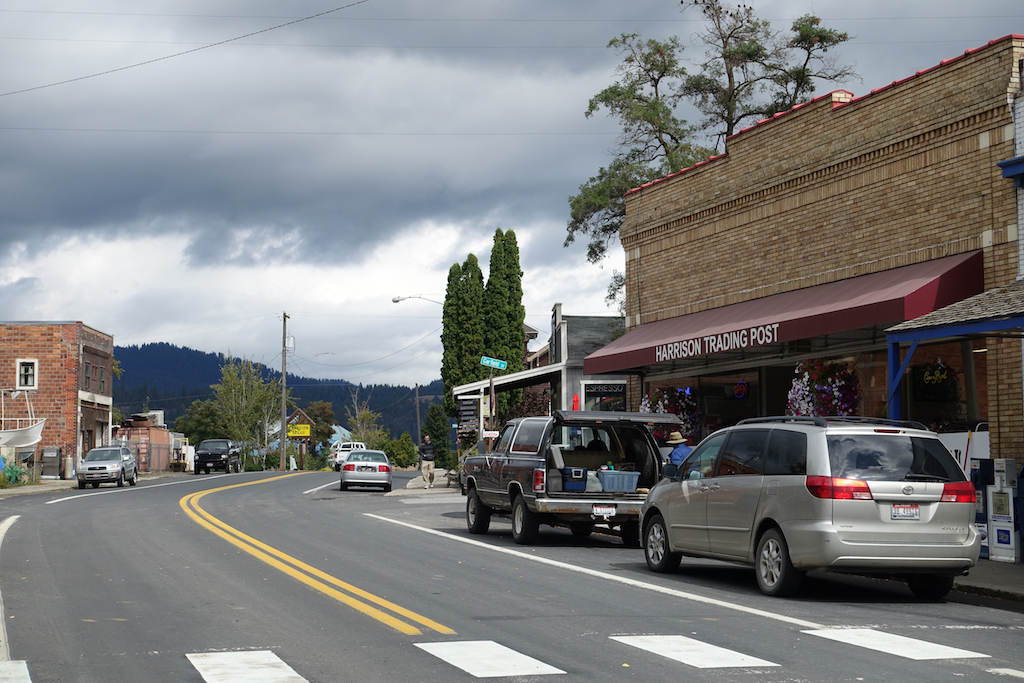 Harrison's main street which is right above a marina on the lake.

Returning on the path we were intrigued with the little town of Harrison and rolled uphill a block from a small marina to the main street. It was populated with a couple of nice looking lunch spots and local shops clearly geared toward the seasonal tourist trade. Not surprisingly the sale rack in front of an outdoor clothing store called to Terry. I stood outside glued to the public library's hot spot and through my bike headphone speaker I could hear Terry talking with the salesperson inside. When I heard "I think my husband would really like this," I knew it was my cue to come inside to see what she had found. Ten minutes later I was stuffing a great Under Armor fishing-style shirt into my bike pack.

Fresh picked apples, great scenery, cool weather and a cool new shirt -- it was a pretty perfect day. But there was still another even more over-the-top adventure ahead of us. 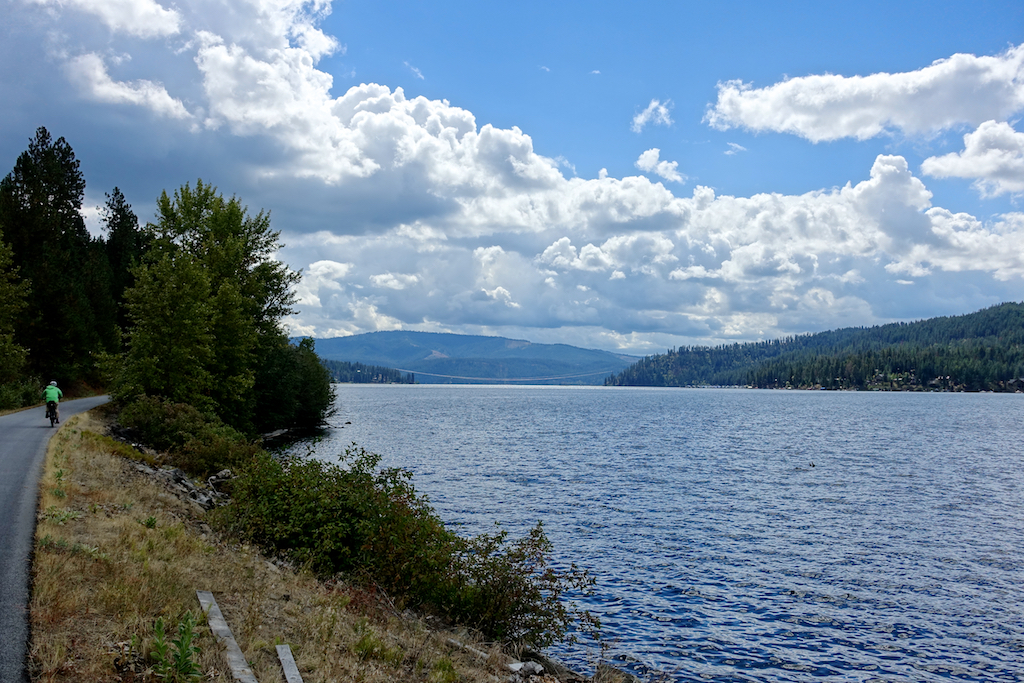 After apple picking, heading south to the Navion and our campsite at Heyburn State Park.

The next morning we drove up to and through the town of Coeur d' Alene. If we hadn't have been on a tighter timeline to return home to Denver I certainly would have stayed for a day or two to explore this beautifully charming community. We're definitely going to come back.

We traded in two lane roads for the ease of divided highway driving now heading east on I-90. A week earlier one of our river guides had told us of the Route of the Hiawatha on the Idaho/Montana border. It sounded exotic and like a must do adventure. He wasn't kidding.

There's the Lookout Pass ski area at 4,500 feet at the state border where you pull off and buy a $10 dollar trail ticket at the lodge. If you have your own bikes - great. If you don't, no worries, you can rent one. And for the less-in-shape you can do a one-way downhill rental with a school bus shuttle to bring you back to the start. You also need a bike light. More on that in a moment.

From the ski area we headed about another five miles east on I-90 and got off at the Taft Exit 5 and continued another two miles along a well graded road to the trailhead. 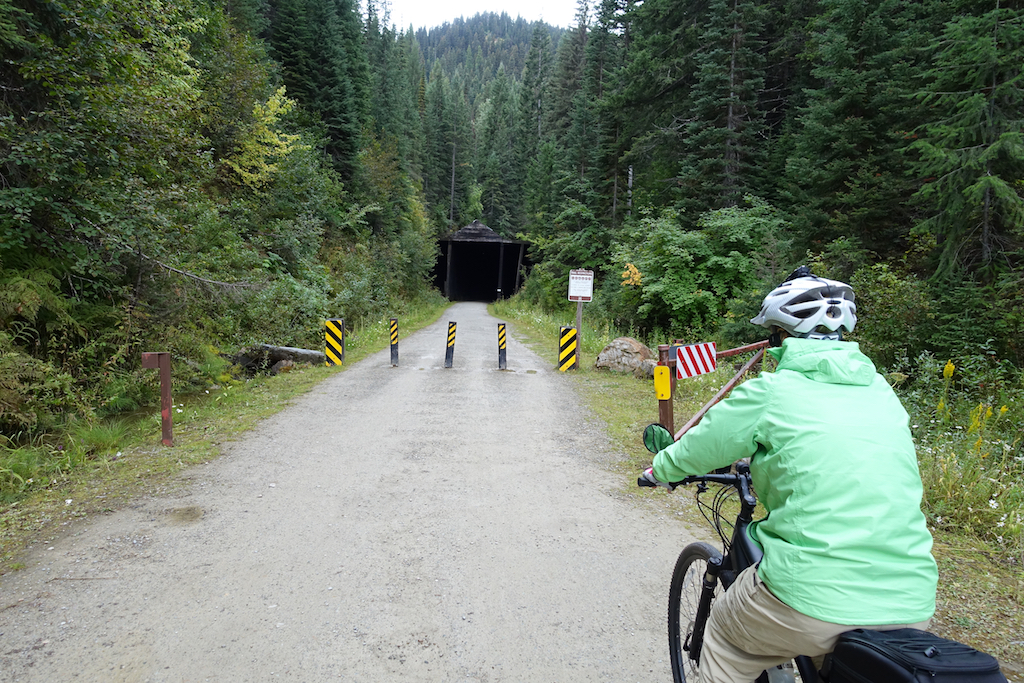 The journey begins with a long dark ride.

The bike trail runs through the heart of the Bitterroot Mountains and in its fifteen miles of length goes through ten (count 'em TEN) tunnels and seven high trestles. Starting to sound exotic enough for you yet? Remember that bike light? You need it right at the beginning so you can roll through a 1.6 mile tunnel in pitch blackness. Not only was I happy to have a bike light, but also a very bright LED headlamp. It's dark. Starting out, the tunnel goes downhill slightly so you can see a small dot of light for minutes until you emerge. On the return. Nada. Zip. Zilch. Only the distant tiny lights of bikers coming toward you. It's just on the edge of creepy and 100% cool. 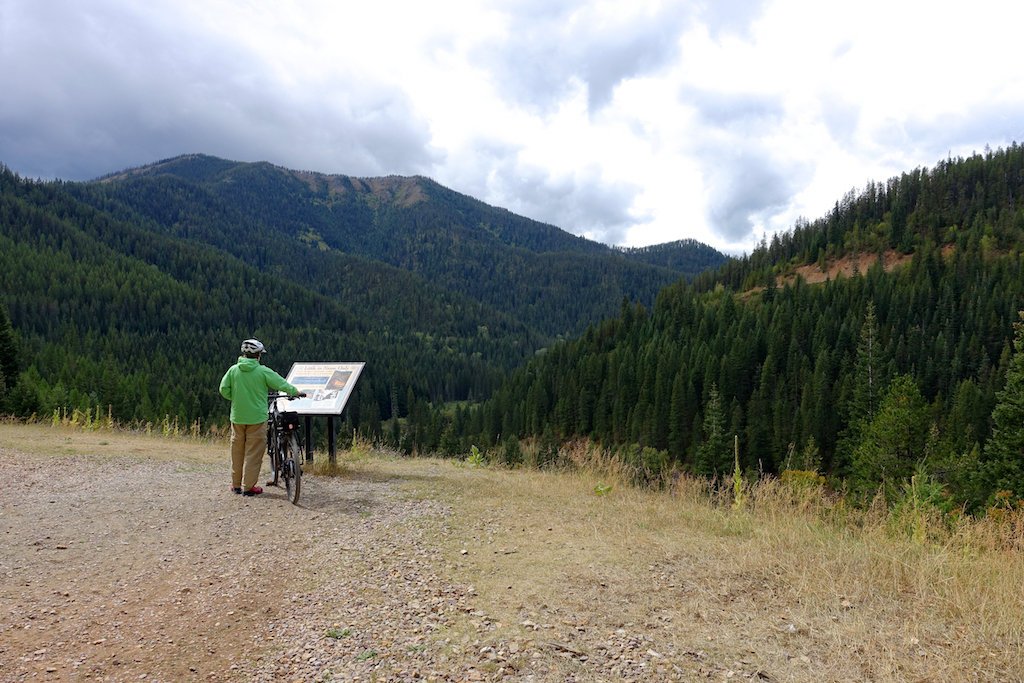 Pull outs and mountain vistas are all along the trail along with a lot of fascinating history.

Along the way there are well placed historical signs that offer fascinating insights into the storied history of the railroad's past. One of the signs described the Great Fire of 1910. Almost to the date we were there 106 years later. It consumed nearly three million acres which is roughly the size of Connecticut. The smoke drifted as far east as Watertown, New York and as far south as Denver. The nearby town of Wallace, Idaho was burnt to the ground. However, with a century of natural healing, you never would have known this conflagration had occurred. 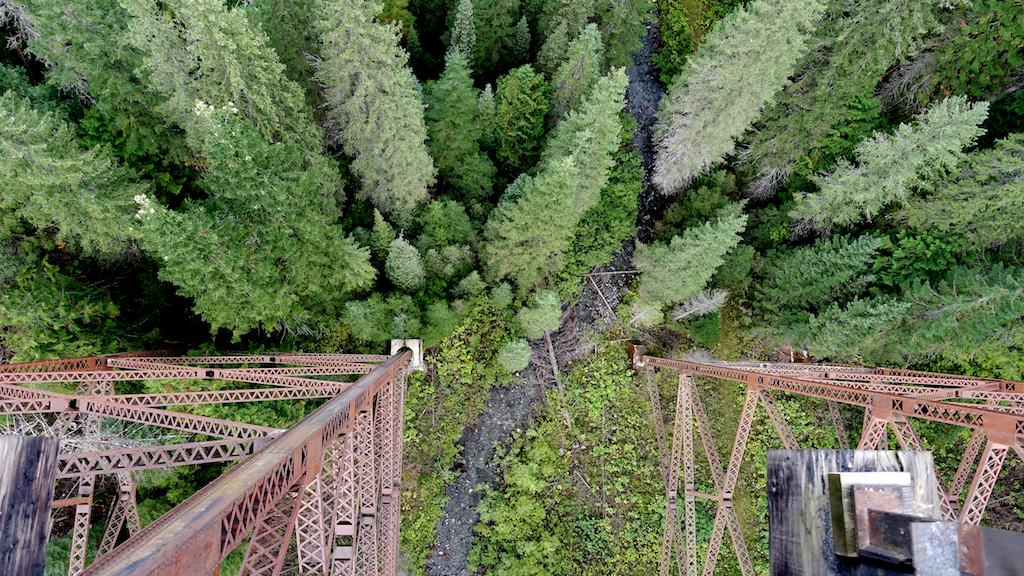 Looking straight down to a creek below.

With each slight curve, trestle and tunnel the forested views kept changing with only the occasional sound of the freewheel click of bikes in coasting mode. When we got to the turnaround point for the return, with a 2.1% uphill grade, we mostly used a lower percentage of power assist to add a helping hand to our uphill return. Nonetheless, that extra e-bike boost allowed us to easily do this roundtrip and love our bikes even more. 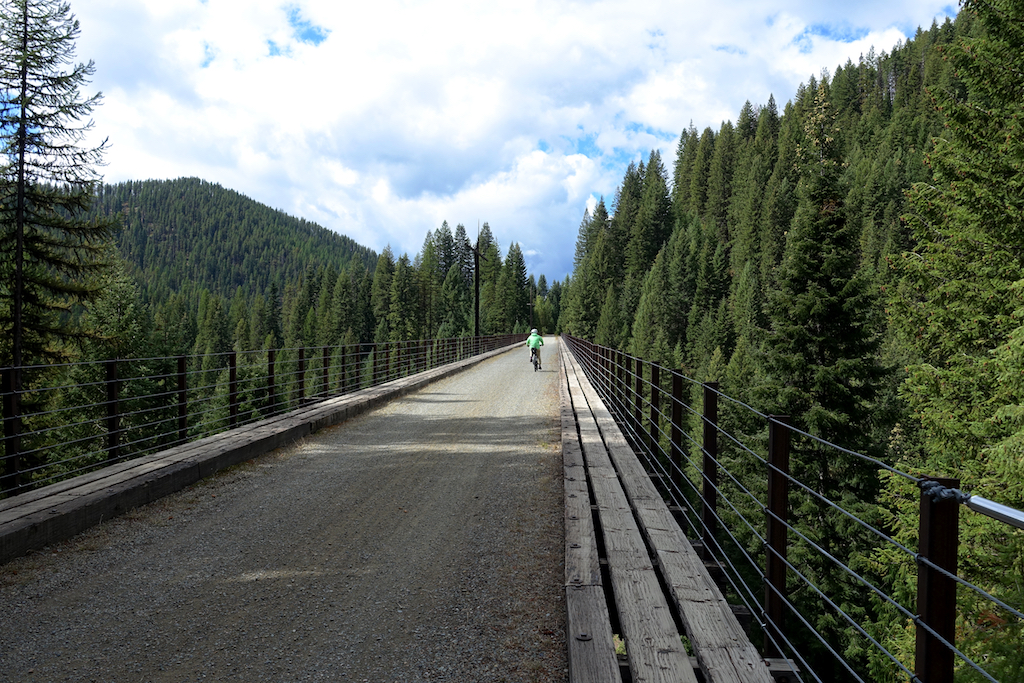 The return uphill was easy. . .especially with a little e-bike help.

The two days of lakeside and mountain biking were so richly satisfying that, for a moment or two, it was easy to forget we had just done an epic river rafting adventure. But therein lies the deepest reward of RV travel in that every day can bring a different map point and memorable adventure.

If you're thinking about riding the Trail of the Coeur d'Alenes there are two good camping options on either end, especially if you want to jump on your bikes right from your RV or don't have a tow car with a bike rack. Heyburn State Park on the west side is about a fifteen minute paved bike ride to the trail. On the east side of the trail near the town of Cataldo there's a private campground called the Kahnderosa that's adjacent to the trail.

There are a variety of RV parks in and near the town of Coeur d'Alene though you'll still find yourself driving 30 to 45 minutes to the Trail of the Coeur d'Alenes trailheads. Here's a link to RV Park reviews for more listings.

The Route of the Hiawatha trail is open from Memorial Day until mid-September. If you don't mind dry camping, you can stay in the large (and pretty level) parking lot of the Lookout Pass ski area. There are a few Forest Service campgrounds in the area, but you should definitely research access and rig size. We had no problems getting the Navion to the trailhead and I saw a 36' foot class A also in the lot. Bigger than that, might be challenging.

Depending on your plans and direction of travel there are two campgrounds to the east in Saint Regis, Montana: The Campground St. Regis and Nugget RV Park. On the west side there's a campground in Wallace, Idaho: Wallace RV Park  and the Blue Anchor RV Park in the town of Osburn.