Camping season is upon us! So, here's a little explanation of how I see the three different types of camping trips.

Since swearing off tent camping and making our way into the RV world last year, we've had some pretty good ordinary trips and some amazing ones. There was a girls-only journey, a dad-and-daughter camping trip, and I even had a solo trek to Baltimore for a race in December that wasn't really a camping trip.

Experience has taught me that these trips break down into three different kinds.

1. Camping on the way to a different destination.

We've done this one plenty of times, most recently at Green Acres in Ohio. You need a place to park and sleep, at a minimum. You might also need a place to plug in and run your appliances or your air conditioner, for your kid to run around and play, or for a nice hot shower before you get on the road in the morning. Places like these range from free to $50 a night.

For free places to stay, try Wal-Mart, Cracker Barrel or Cabela's. Ask the manager first. You'll have a paved, level spot without much worry about security. Recognize that you're squatting with permission, so no awnings, camping chairs or tailgating. You'll probably also need your sun shades because the parking lots are brightly lit. Ear plugs wouldn't hurt either -- and you may want to ask when the trash gets picked up, so you won't be trying to sleep at the same time.

The Ohio Turnpike has RV overnight parking at many of its service plazas. These are barebones, not much more than a parking space with an electric hookup. There is a dump station, and showers inside the plaza are free. Camping costs $20, cash only, no reservations accepted. This is a good choice if you're tired and just want to rest. Our stop last winter was surprisingly quiet for being so close to the highway.

State parks are a safe, comfortable and generally inexpensive place to camp for a night. Some are surprisingly close to the interstate. Mosquito Lake, where Lindy and XY have stayed twice, is one of these. It's got activities and trails and a centralized shower building, all for $26 a night. Note that different state parks have different rules regarding pets. Also, every state park I've visited has a dump station instead of water and sewer hookups at individual sites. You'll need to allow for time to do this on the way out if you need.

2. Camping that's attached to a destination.

The second type of camping is also incidental to a place you're going, but it's right there. This is what we do when an attraction or a family event offers a chance to stay right on site.

Festivals are the biggest and most obvious examples of destination camping. We haven't actually done one of these yet. The Winnebago Grand National Rally in Iowa is probably the world's largest such gathering. People take RVs to the Electric Forest Festival in Michigan too. And Punkin Chunkin in Delaware offers RV camping -- though we stayed off-site at a nearby state park because it was less expensive and had hookups.

We went to Dutch Wonderland in Pennsylvania the first two summers we lived in Maryland, staying in a hotel across the street each time. Last year, we stayed in Roxanne in the campground next to the park - twice. We also had a trip to Jellystone and one to Lake Fairfax, both campgrounds mixed together with water parks and other activities for kids. And there were two driveway stays with relatives last year, once in Indiana and the other in Michigan.

Destination-attached camping in a small RV gives you the comforts of home right next to the attraction you're visiting. It gives you the ability to retreat to a place of calm if you need, and to keep your own food cold and at the ready. It's unquestionably cheaper than hotels too.

3. Camping that is the destination.

My first introduction to camping was in my 20s, and it was a destination trip. The parents of a good friend of mine from high school and their college friends had started it decades earlier. It was tents, camp chairs and firewood in the middle of Hoosier National Forest, with an outhouse over a hole in the ground. I went back for several years, even flying halfway across the country with Lindy one year when we no longer lived in the Midwest. That annual trip now spans three generations of campers, we haven't gone in years, and you couldn't get an RV within two miles of the campsite. But it was a formative experience.

The two of us, plus the late dog, then the three of us and sometimes the newer dog have been to loads of campgrounds in the area where we live. The breath-taking Assateague Island. The terrific Maryland state parks. We've gone on our own or joined a group. These car campgrounds aren't as low-tech or remote as the Indiana version of camping. (I have seen more than one big-screen TV and at least one espresso maker out there through the years). But they do offer a chance to unplug, see the stars and spend time in the fresh air. Even though I've decided my 41-year-old self is retired from tents and Therm-a-Rest pads, I've gotten some of my best nights' sleep and best naps while out camping.

Over the past few years, we've been fortunate to join another longstanding family camping trip that started with college friends - my in-laws' annual outing to P.J. Hoffmaster State Park near Muskegon, Michigan. The facility is pretty standard state campground fare, though the nearly 300 sites are broken into much smaller loops to keep it from feeling enormous. Also, it's along a Lake Michigan beach. It's nice to have sand and waves with fresh water and less concern about sharks and the sea level rising. 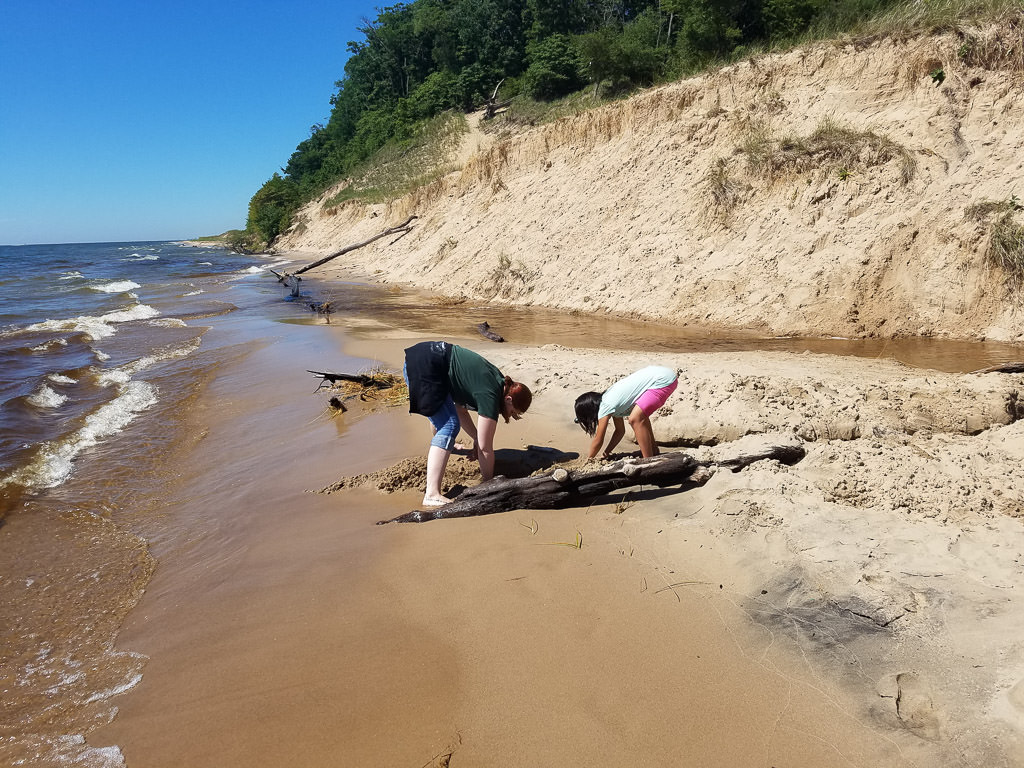 And finally, Hoffmaster has the cleanest campground bathrooms I have ever seen. As in, they're clean at the beginning of the weekend and they keep getting clean during the course of the trip. There's also usually plenty of hot water. We use the bathroom in Roxanne for convenience, but confine the more time-consuming activities to the centralized campground facilities, so this is important.

My in-laws do an amazing job with the logistics for the whole group, as the family that lives closest to the campground. It starts with making reservations the moment they're available and finding enough space for three extended families. Then there's base camp on their site, with a pop-up trailer, picnic tents and tables gathered from all around. A grill, coolers, lanterns and all manner of things for eating on and eating with are the last bits to round out the setup. It's everything you might need for a long weekend at a campground, except the wave of forgotten items that ripples through each one of our campsites and sends every one of us to the store multiple times during the trip.

I get a kick out of watching the different family dynamics, and talking to the kids as they turn into grown-ups. When you see people once a year and know them a bit but not terribly well, it feels a little like watching the latest installment of the 7-Up series. Neat. And XY gets so much grown-up attention that she doesn't even go looking for other kids to play with.

There's always a lot of food. Cookies, snacks and the side dish that each person has been perfecting throughout the course of the year. We introduced the Beyond Burger to the bunch this time, with good success. And we ate a little spaghetti.*

*In my post about last year's trip, I guess I might have made a little comment about an abundance of spaghetti. I'm not sure I said another word about it since. But in the land of campfire folklore, I had given my father-in-law no end of recurring grief on the subject for 12 entire months!

Mea culpa. I shouldn't have said anything. After all, when you have a camp stove that uses a full-sized propane tank and a cooking pot the diameter of an oil drum, you can cook as many noodles as you want! And if 10 boxes of spaghetti for 18 people seems like a good idea, you can hand out gallon-sized Ziploc bags full of the leftovers afterwards. It's a delicious problem to have.

I do feel compelled to point out that this year, after three boxes of spaghetti got dished out, there were no leftovers. The pot was empty. And the meal was delicious.

No seconds for pasta, but nobody went hungry. The last morning of the trip, there's also a traditional stop at the Whippi Dip afterward for fries and frozen treats. 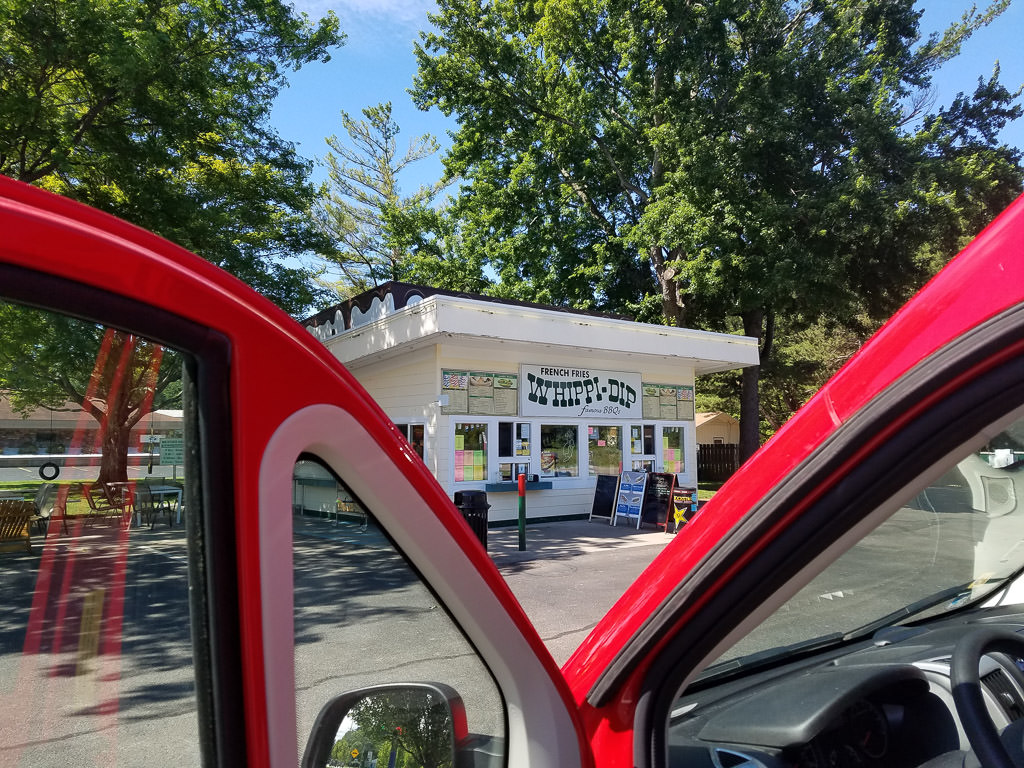 When I was younger, I used to dwell more on the purity of the camping experience -- no watches, no indoor plumbing, as little gear as possible. Now I'm just grateful for the change in environment and the chance to spend time outdoors with people I care about. In an era when even the tent campers are grateful for electric hookups so they can charge their cell phones, I don't have any reservations about driving around with a fridge or a couple of comfy beds behind me either.

Wherever the road takes you this summer, I wish you the best of journeys!