The Quirks of the Quest

When I travel, I do so profoundly. Everywhere I go, everything I explore, everyone I meet... they're all fodder for insight and discovery. Amy and I always remember to pack some intellectual curiosity, so we take these journeys seriously. But I am also a connoisseur of the quirky. Show me something unusual. Topple expectations. Make me smile.

During our recent six-week journey through the Midwest and Northwest in a 2016 red-and-retro Winnebago Brave 31C, I was constantly on the lookout for the weird and wonderful. And it seemed to be around every bend in the road.

The wonderful? I always start counting first and foremost what I like to call "whoa" moments--those moments that take your breath away. Gasps of wonder.

On this 11-state journey, there were many. In the Black Hills. At Devils Tower. Along the Salmon River Scenic Byway. At Glacier National Park. In fact, about a dozen times at Glacier National Park. But I most vividly recall that moment when we reached Red Canyon Overlook along the south end of Utah's Lake Flaming Gorge, when tiny speedboats left behind rippling wakes as they cruised along blue waters through, well, a red canyon. Our gasps came from far-exceeded expectations. 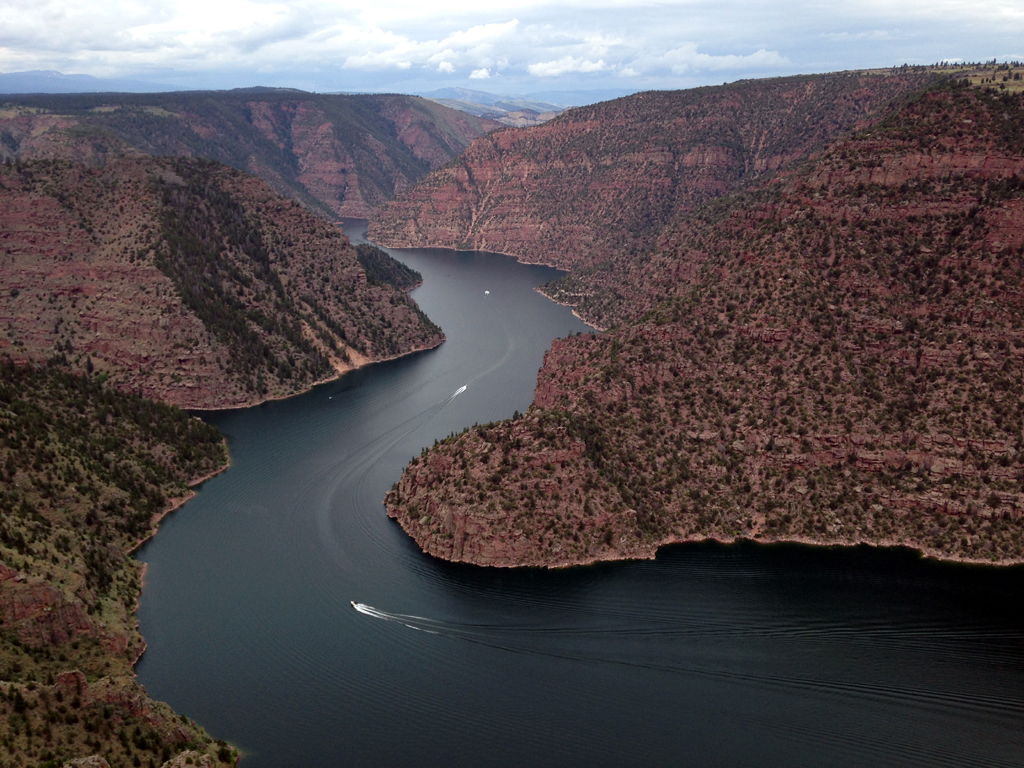 But we always come across a sense of humor nearly as ubiquitous as the sense of wonder. Like, for instance, a certain sign touting Buffalo, Wyoming. I collect town slogans. It's sort of a hobby. And we came across plenty of them along this journey. Stanley, Idaho? "Gateway to the Sawtooth Wilderness." Madelia, Minnesota? "Pheasant Capital of Minnesota." Deadwood, South Dakota? "Where Western Legends Were Born." Bonners Ferry, Idaho? "Jewel of the Gem State." Troy, Montana? "Lowest Elevation-Highest Recreation." But Buffalo took first prize: "More Than a One-Horse Town." 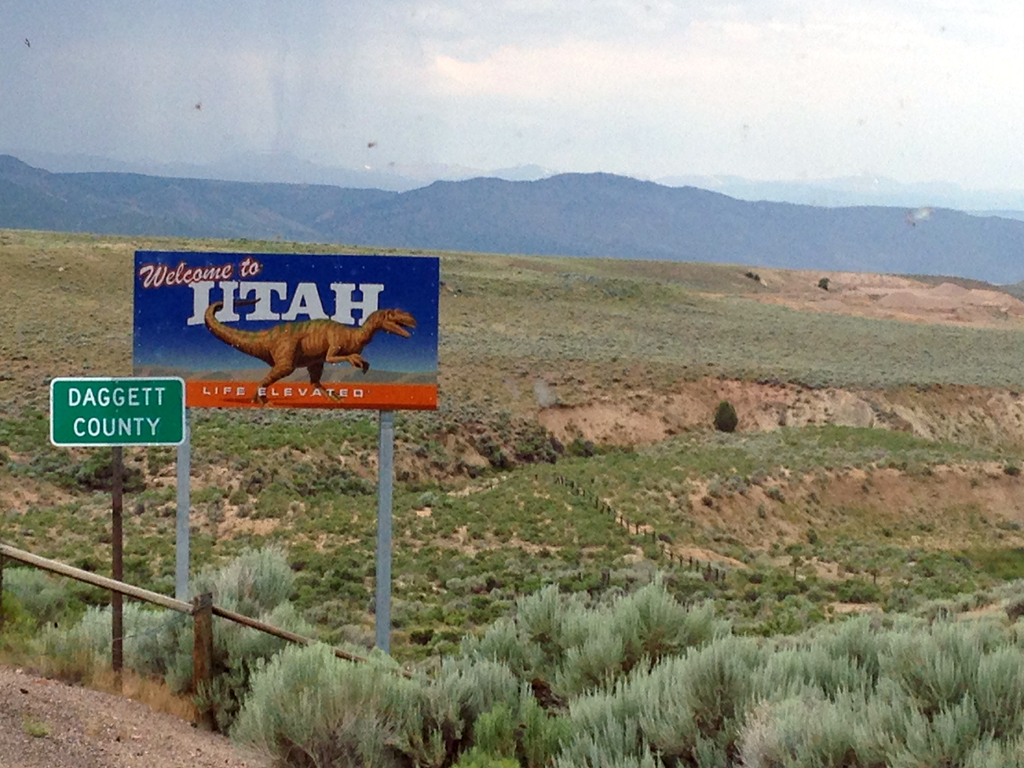 It's not often that a simple sign can lift your spirits. But the marquee for the Stoneyville Saloon in Alzada, Montana, sure did: "Cheap Drinks, Lousy Food." And so did the billboard for Great Plains Zoo in Sioux Falls: "Very, Very Naughty Monkeys." And that tavern in Boise (a place called Pre-Funk) that announced "Free beer, topless bartenders, false advertising." And a get-lost-amid-the-books used bookstore in Sandpoint, Idaho, gave me a chuckle... 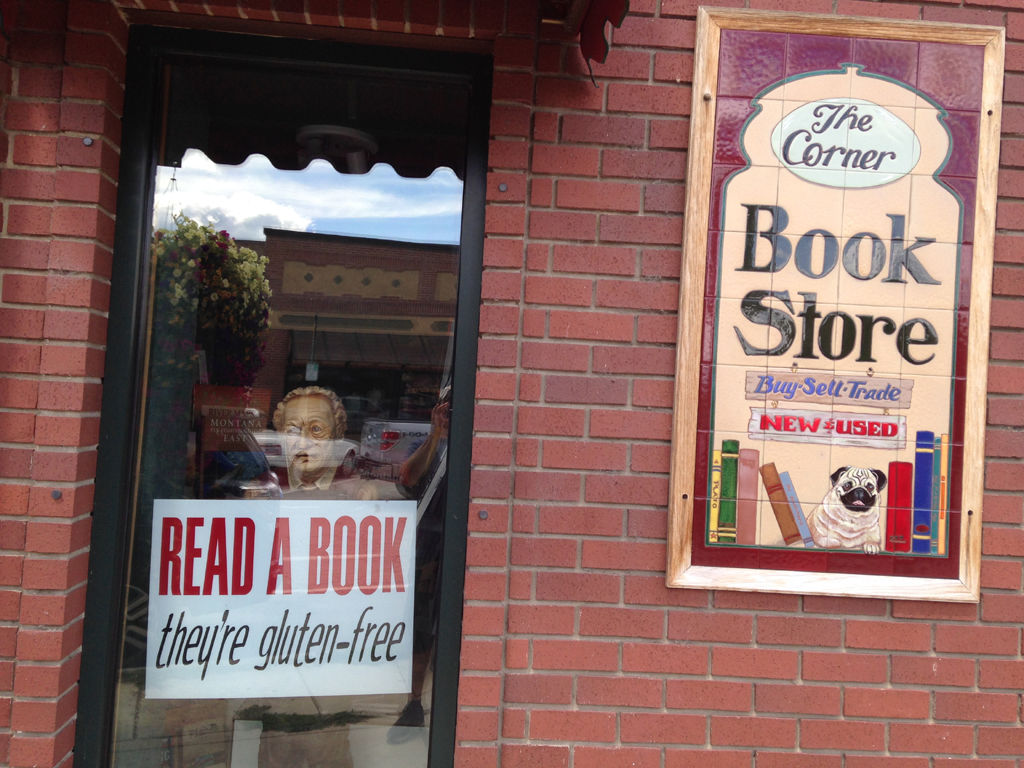 I also could appreciate the t-shirts being sold at the Winnebago Outdoor Store in Forest City, Iowa. 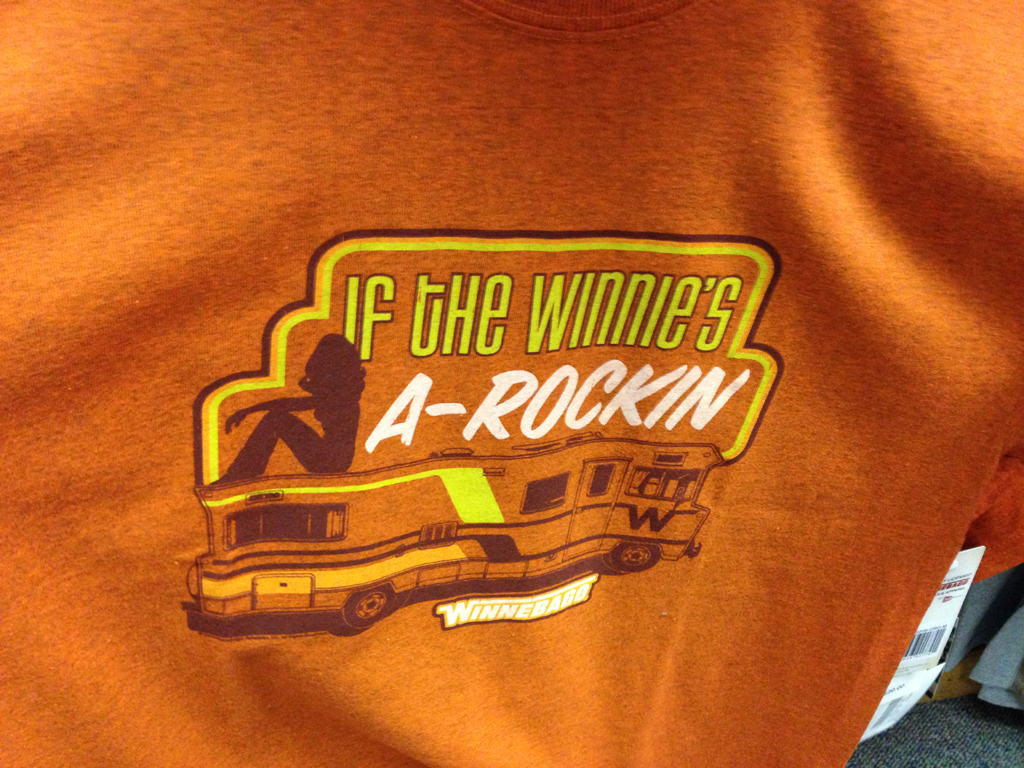 And there were some pithy socks for sale in Sioux Falls... 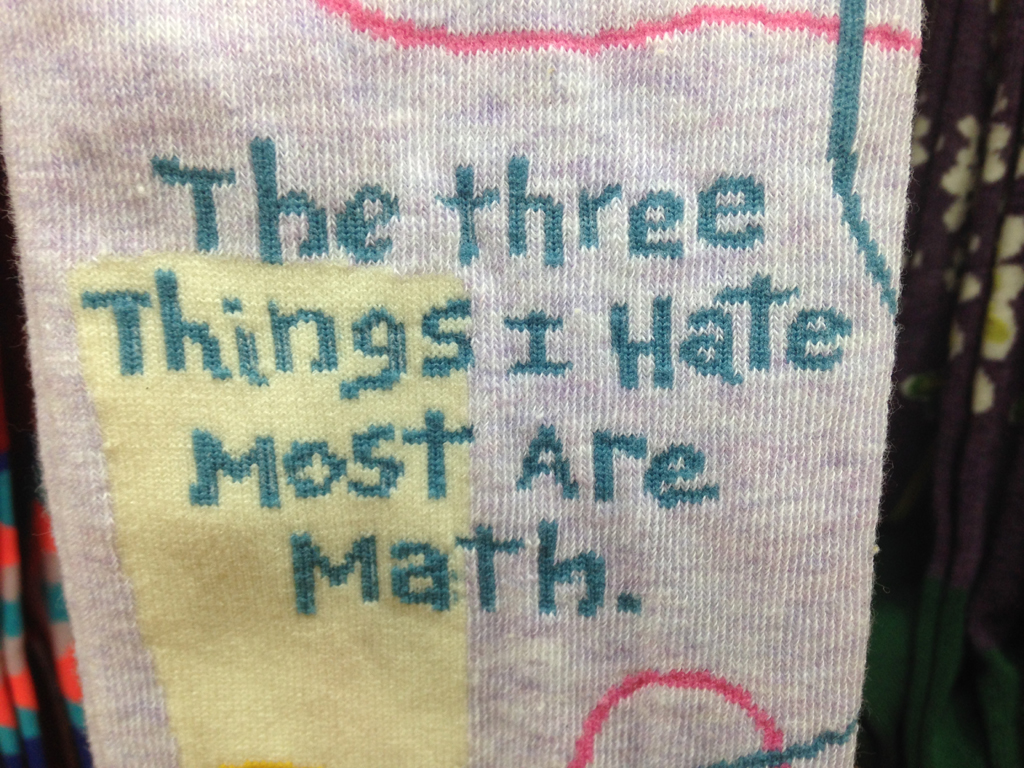 I found it amusing that an invitation to view the Missouri River in South Dakota... was actually not all that inviting... 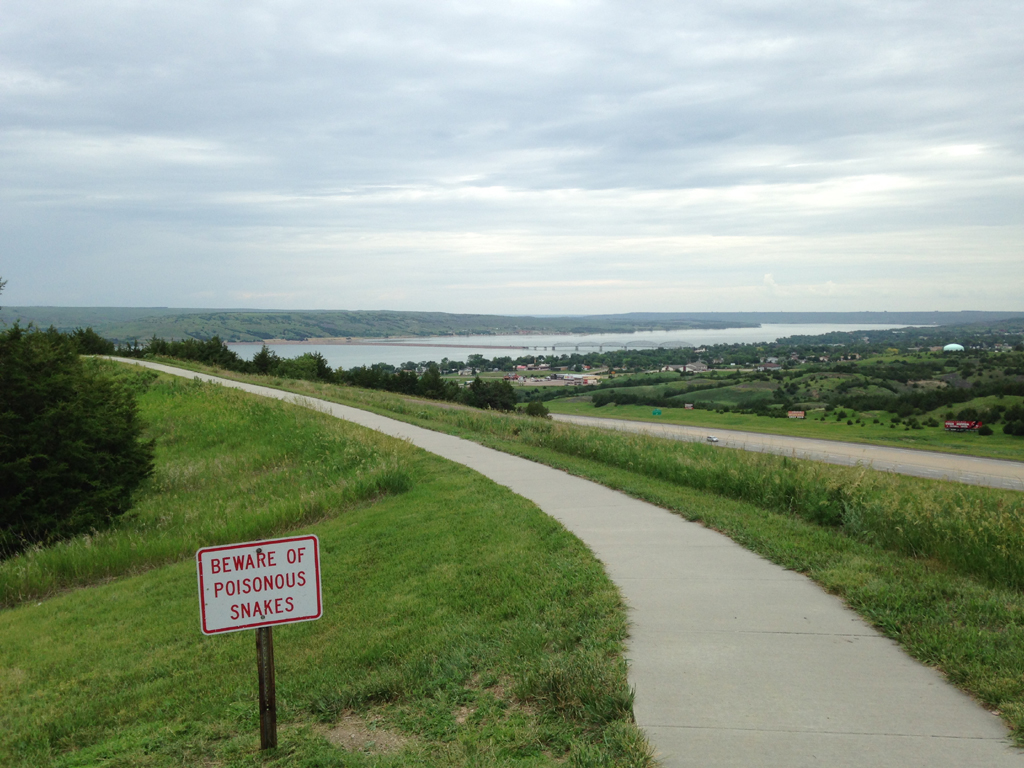 I could appreciate the cheekiness at the gift shop at Minuteman Missile National Historic Site. 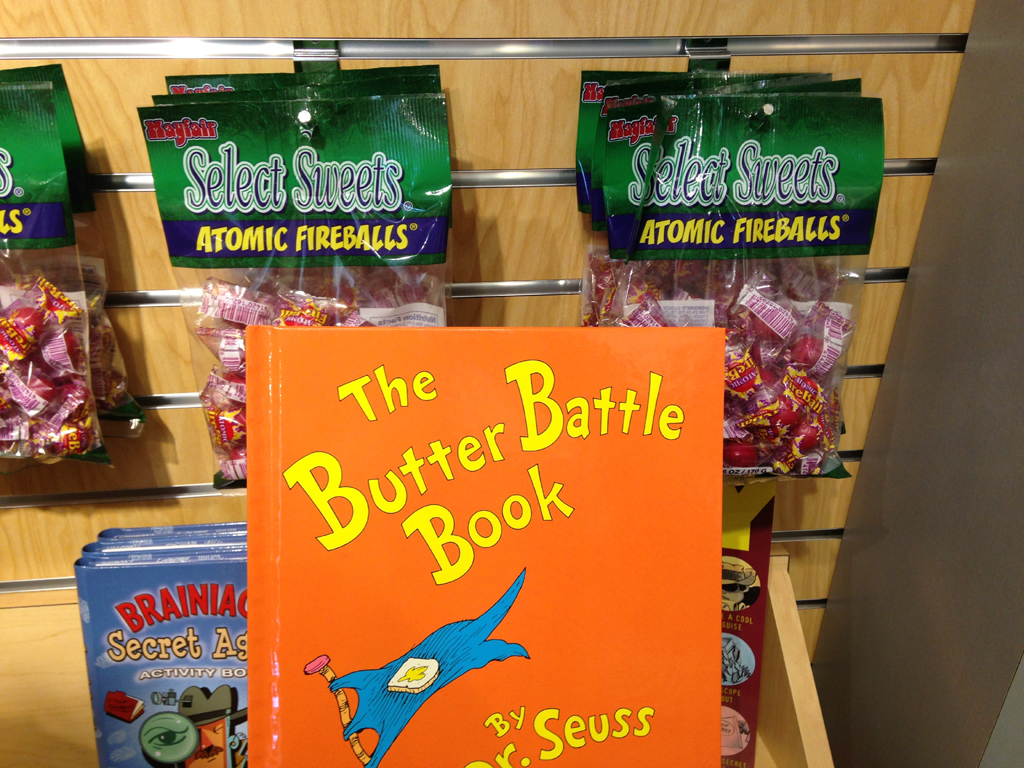 And I could at least understand the dark humor painted on the nearly impenetrable door to the missile control room 32 feet underground. 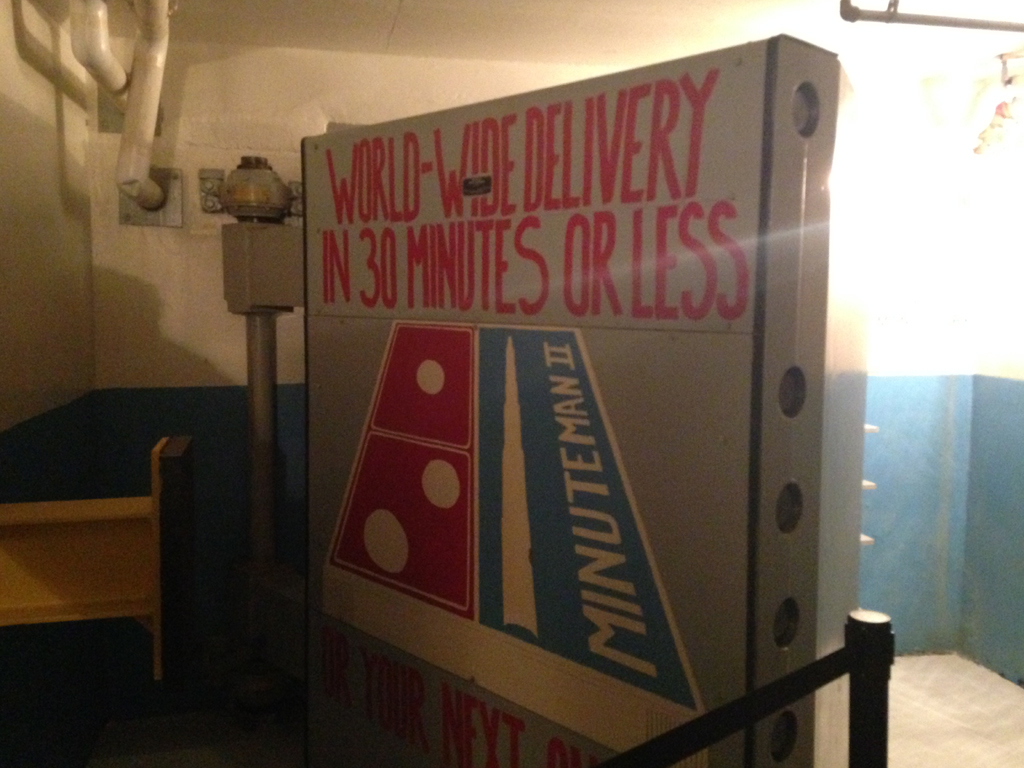 For all the reverence imbued in the 42 statues along the Presidents Walk throughout downtown Rapid City, South Dakota, I still took pleasure in the fact that we found George Washington at the entry to a Starbucks, and FDR standing (yes) before a Furniture Mart, and George W. Bush planted in front of a Hardee's. 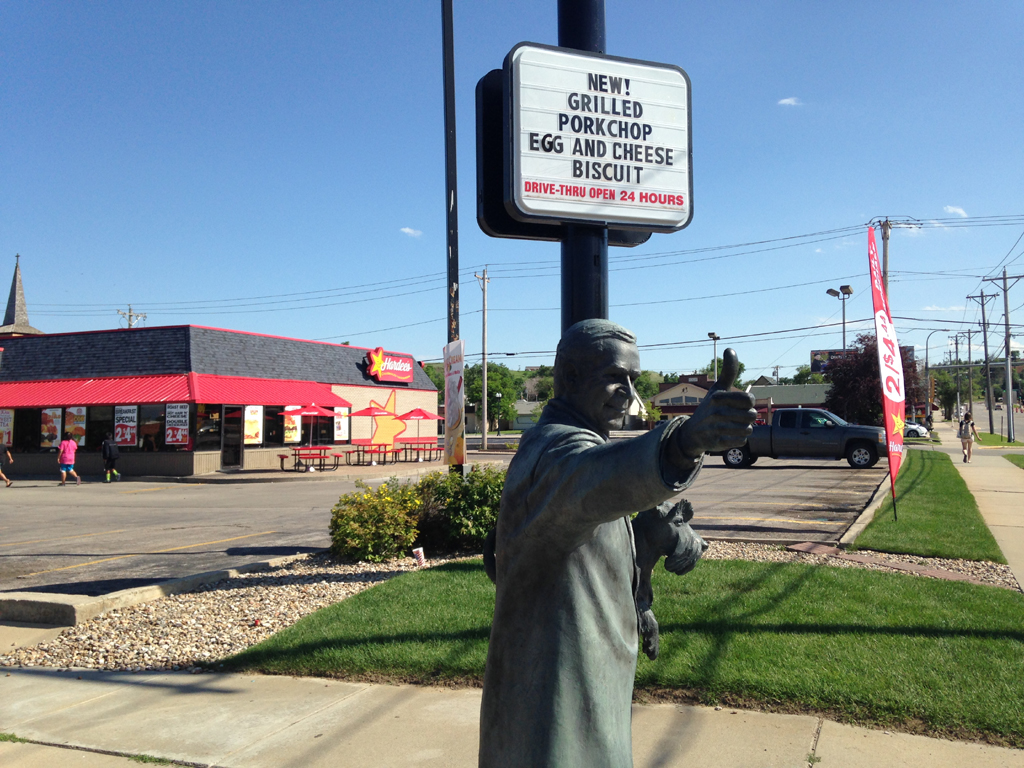 I loved the wacky and wondrous things that we saw along the highway. 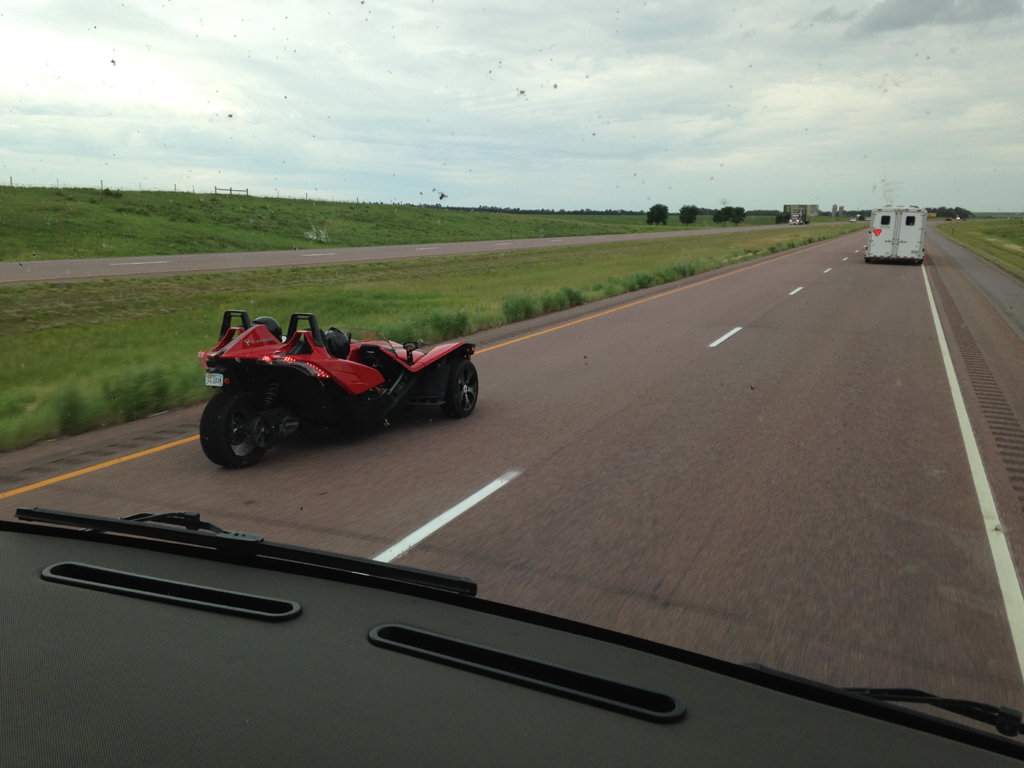 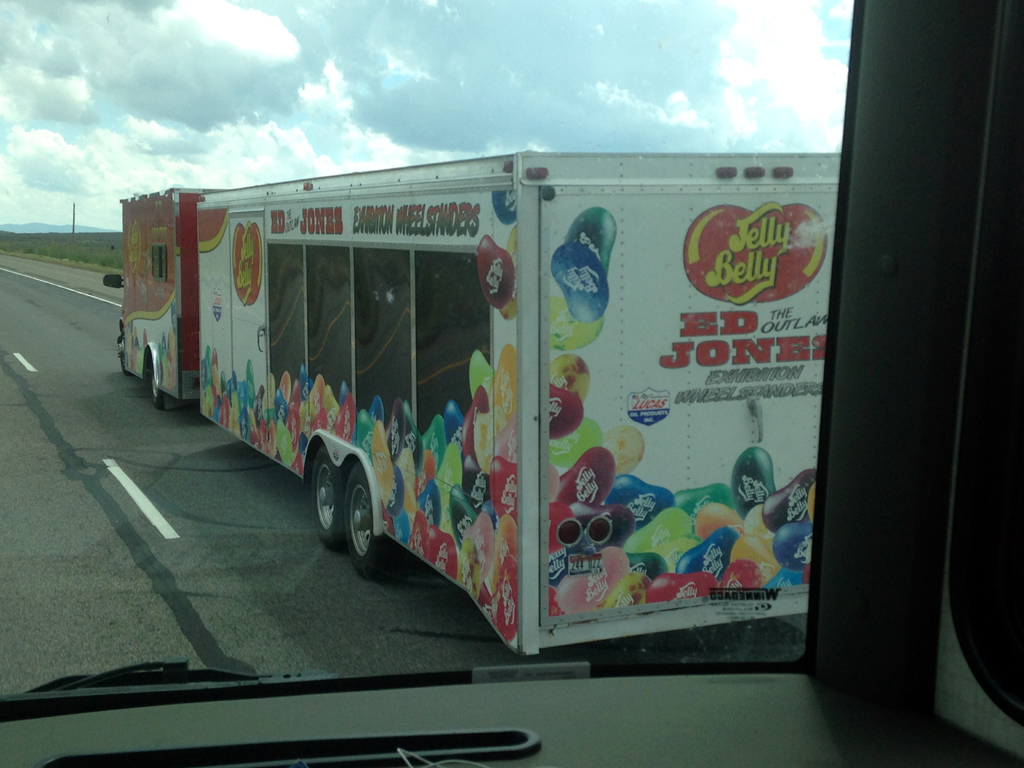 There's a story everywhere. And I found one, literally, in Wyoming--a hiccup of a detour off of I-25 between Buffalo and Casper. 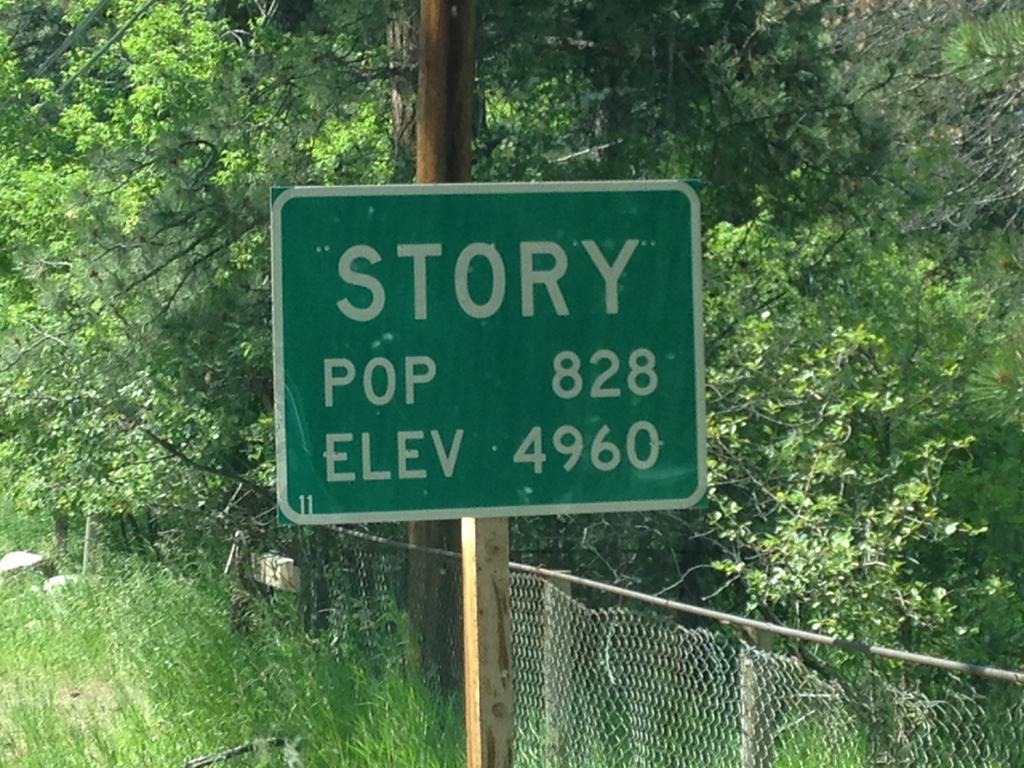 As a pen-to-paper guy, I applaud the name. As a tongue-in-cheek aficionado, I love that this little hamlet boasts a Story Library and a Story School and a Waldorf A Story guest house, and a Storybrooke Lane. Not to mention myriad options about where to take your character. 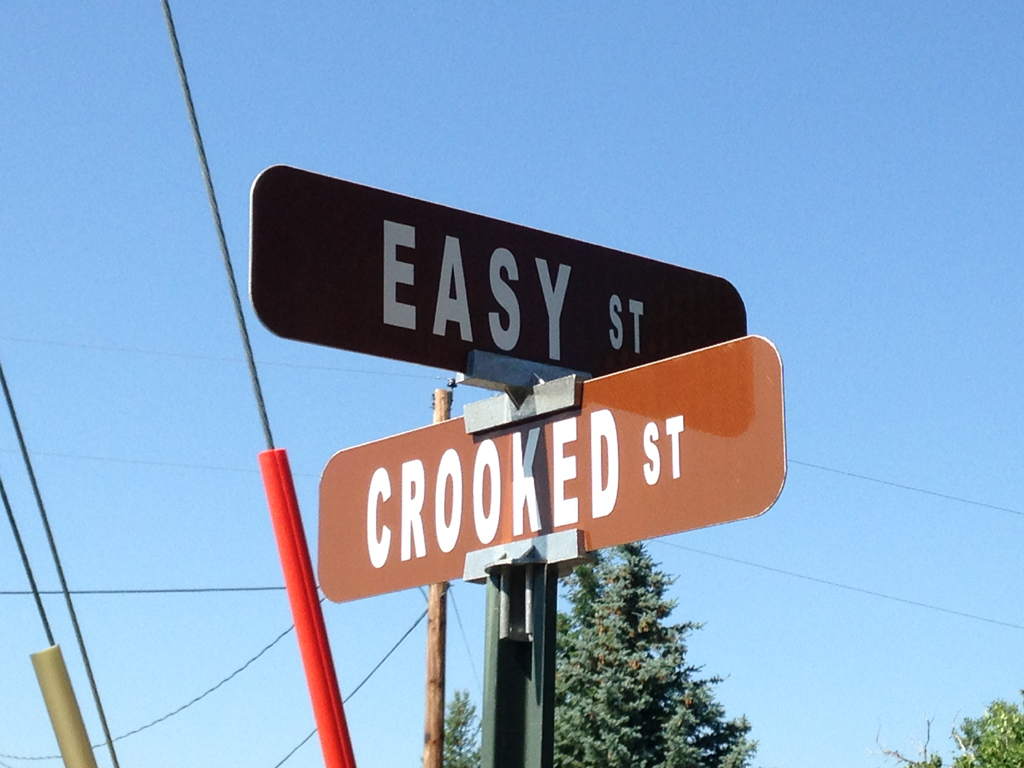 I grinned at the notion that in Stanley, Idaho--the most down-to-earth of places--you can meet someone at the corner of Wall Street and Aces of Diamonds. And that there's a Floating Feather Road in the town of Eagle, Idaho. And that there's a Church Street in Priest River, Idaho. And a Camels Hump Road (notice: no apostrophe) near St. Regis, Montana.

I wish we'd planned a stop at Josephine's Pizza and RV Park in Gibbonsville, Idaho. Or Pinehurst, Idaho's By The Way Campground. I wish we'd filled up at Cruel Jack's Travel Plaza in Rock Springs, Wyoming. Or we'd worked out at Right to Bare Arms fitness center in Darby, Montana (which, by the way, is "Home of the Biggest Little Bull Riding in the Northwest"). And maybe we could have stopped for a bite at Bimbo Bakeries in La Crosse, Wisconsin. 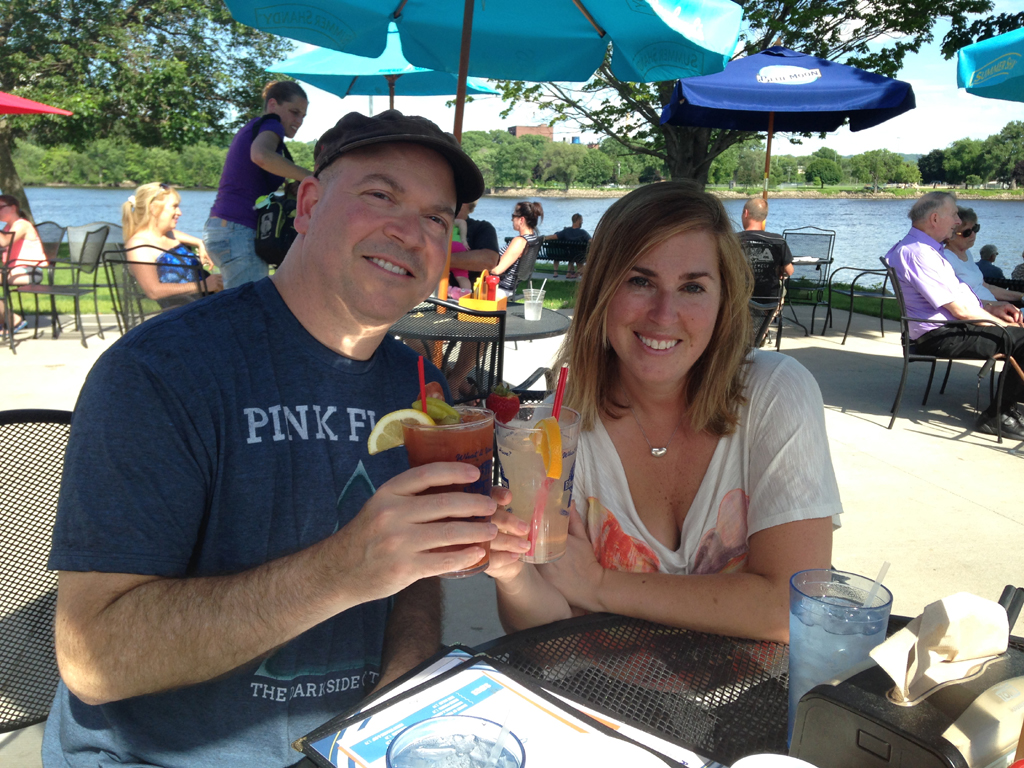 Ah yes, the eclectic foods. We passed up the chance--just west of Jordan, Minnesota--to stop at "Minnesota's Largest Candy Store," which offered "87 Kinds of Licorice" and "155 Kinds of Root Beer." But we did exercise gastronomic geography with all sorts of this-sounds-worth-a-try places. Don't get me wrong. We value the Brave's kitchen as much as anyone. And we actually did try to stick to a healthy diet along the way. But sometimes you can't pass up a taste of the local offerings.

So we took great gulps of icons, sometimes two at a time--like when we sat at the Pettibone Boat Club, eating Wisconsin's famous cheese curds (along with a drink or two) while watching boats navigate the Mississippi River in La Crosse, Wisconsin.

We ate The Belt (basically a BLT with a fried egg on it) at The Deadwood Social Club. At the retro-designed (like our Brave) Phillips Avenue Diner in Sioux Falls, South Dakota, we thoroughly enjoyed Breakfast Poutine (crisp red and white sweet potatoes topped with cheese curds, applewood bacon, tomatoes, gravy and a sunny side up egg). At Utah's Flaming Gorge Resort, we passed up the Polygamy Porter (no kidding) for the Uinta Golden Spoke Hefeweizen. At Kyoko, a hole-in-the-wall sushi joint in a mall spanning the Pend Oreille River in Sandpoint, Idaho, we ordered a roll known as the Larry Bird (we could have ordered the Jessica Albacore).

But our most memorable meal came in beautiful Couer d'Alene, Idaho, on a Wednesday evening that was so surprisingly bustling and hip that it felt like a Saturday in San Francisco. A relatively new restaurant called Crafted called to us. It was just a block or two from a farmer's market offering everything from local huckleberries to purses made out of bicycle tire inner tubes. But Crafted? It offered kegs turned into planters. And a foosball table. And iPads at each table. And an aquarium whose residents are called to action every weekend. 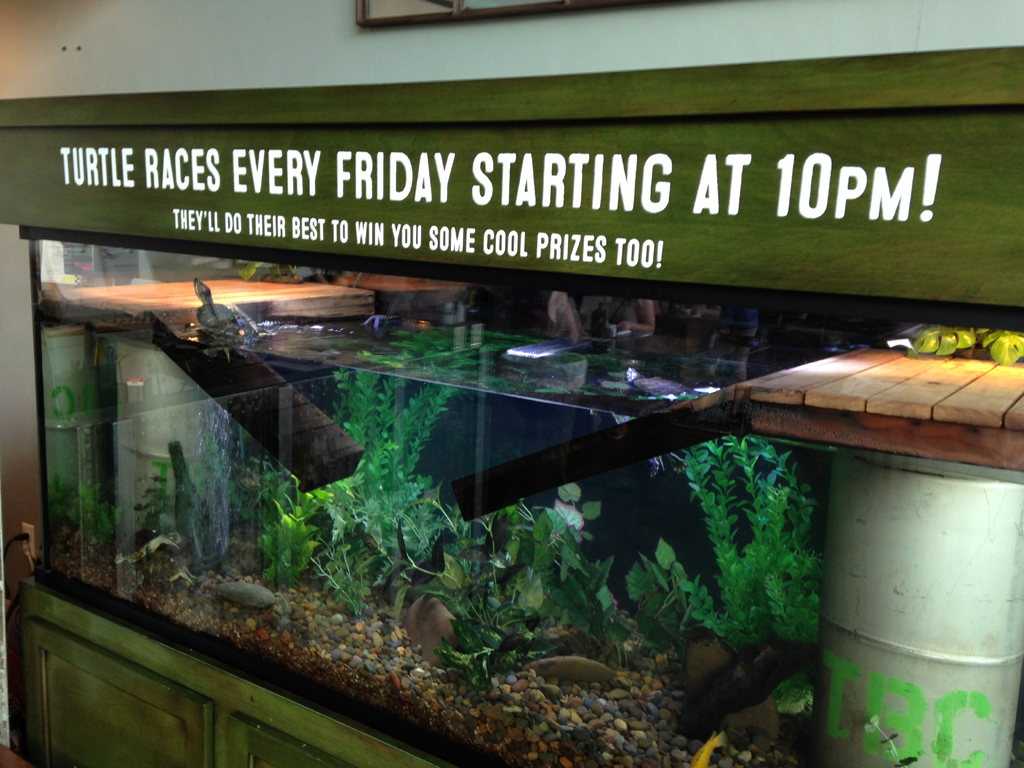 Crafted's menu items have names like That's What C Said and One Giant Leaf For Mankind. Amy and I opted to share a tall glass of pear cider, sweet potato fries with gorgonzola fondue, yellowfin tuna tartar, and The Old Man and the C (shrimp cakes and seaweed salad). The food was as delicious as the quirky atmosphere.

But mostly we just ate up the whole summer experience, equal helpings of silly and serene. Either way, it's hard not to smile. 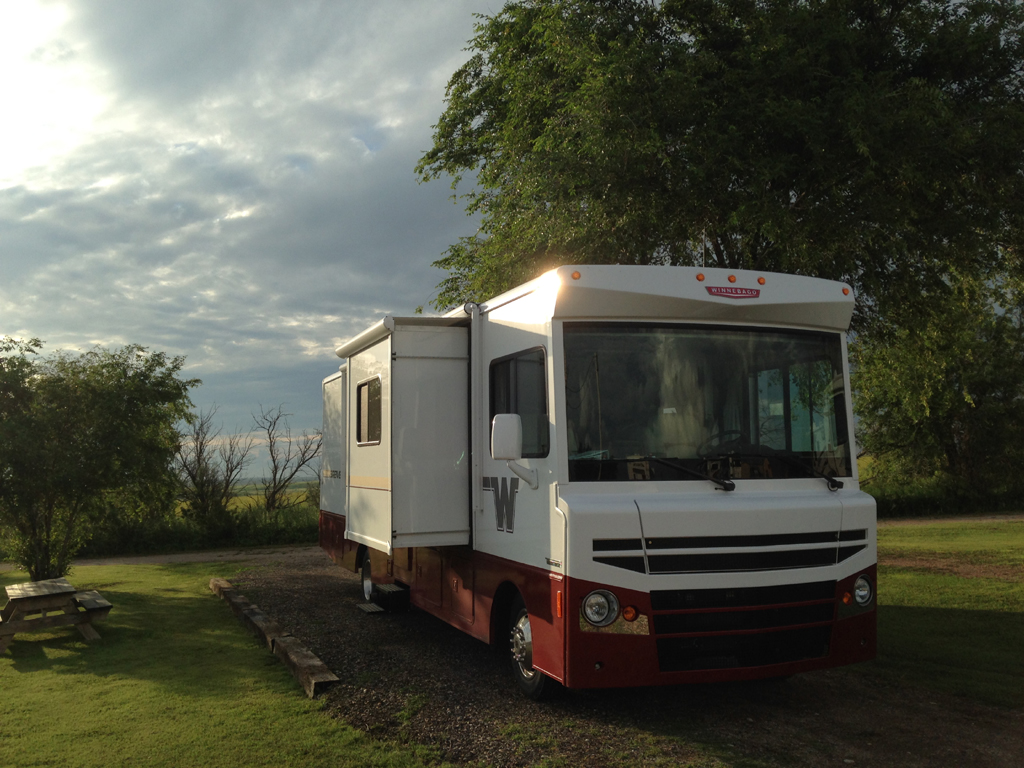