Anyone who has traveled through Glenwood Canyon on I-70 near Glenwood Springs, Colorado has undoubtedly noticed an incredibly scenic section of the Colorado River. At the eastern mouth of the canyon, the river appears to be a gentle, meandering lake: an ideal place to spend an afternoon in a canoe. However don't be fooled by the placid appearance of this very short stretch of calm, because just around the bend to the west the river plunges into a thundering chasm of frothy chaos knows as Death Canyon. And below that is one of Peter's favorite winter kayak runs: Shoshone.

Watch Abby and Peter navigate the river by clicking here for a 2 minute on the water video. 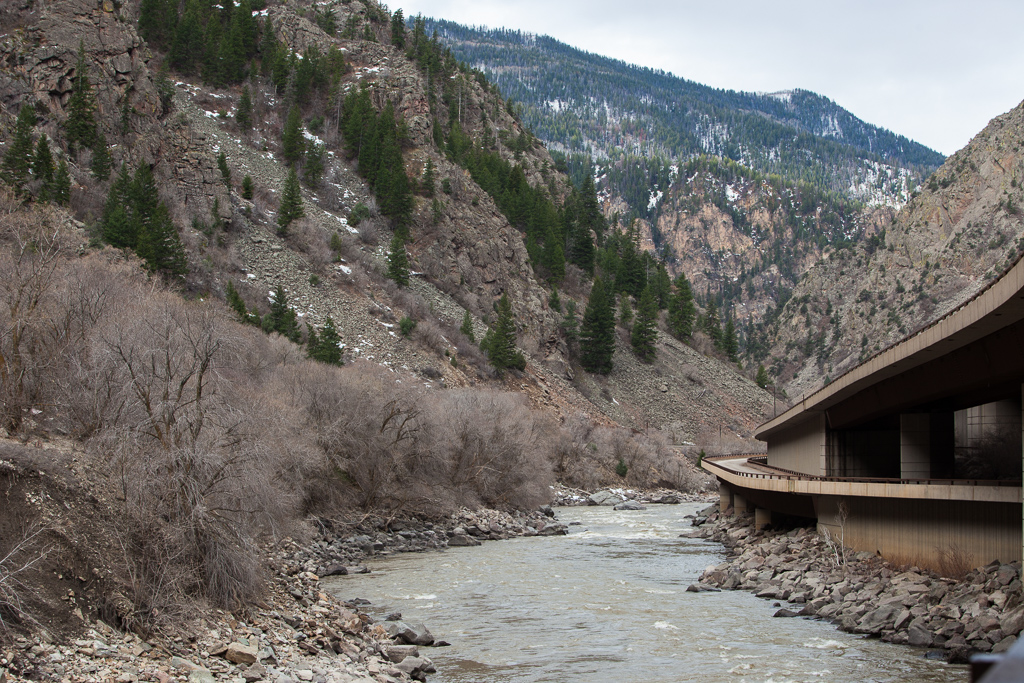 Looking down the Colorado River from the Shoshone boat launch.

The Shoshone section of the Colorado River is notorious in the Holcombe household, because for Peter, it marks the start of a new year of kayaking. For the past seven years, Peter and 30 of his most dedicated paddling friends ring in the New Year with a frosty lap or two down the one mile stretch of class III whitewater. Some years the temperature on New Year's Day reaches a balmy 35 degrees, while other years it peaks in the single digits. Regardless of the weather, Peter has always returned home with tales of beardcicles, de-icing lifejackets with the hand dryers in the restrooms at the takeout and an occasional epic adventure on the river by an ill-prepared or inexperienced kayaker. 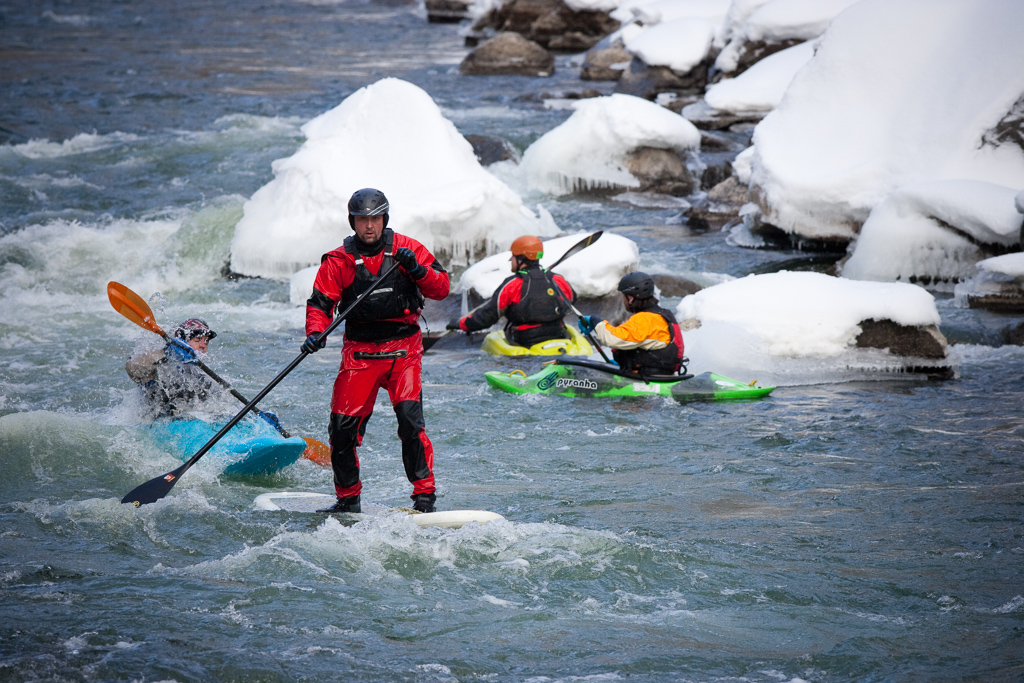 These stories have become legend in our family, providing fodder for numerous campfire stories over the years, and escalating the moderate Class III stretch of whitewater into more of a mental undertaking than perhaps is warranted. For the past two years, Peter has wanted Abby to experience Shoshone for herself, and when we drove through the canyon this spring, he was thrilled when Abby declared she was ready to kayak Shoshone for the first time. Before launching, they walked the entire length of the run, carefully analyzing each rapid, and developing a plan to navigate each obstacle safely. Although she was fairly confident she could make all the moves needed for each of the rapids, they both agreed that her first lap would be better in our two man kayak - the Jackson Dynamic Duo. 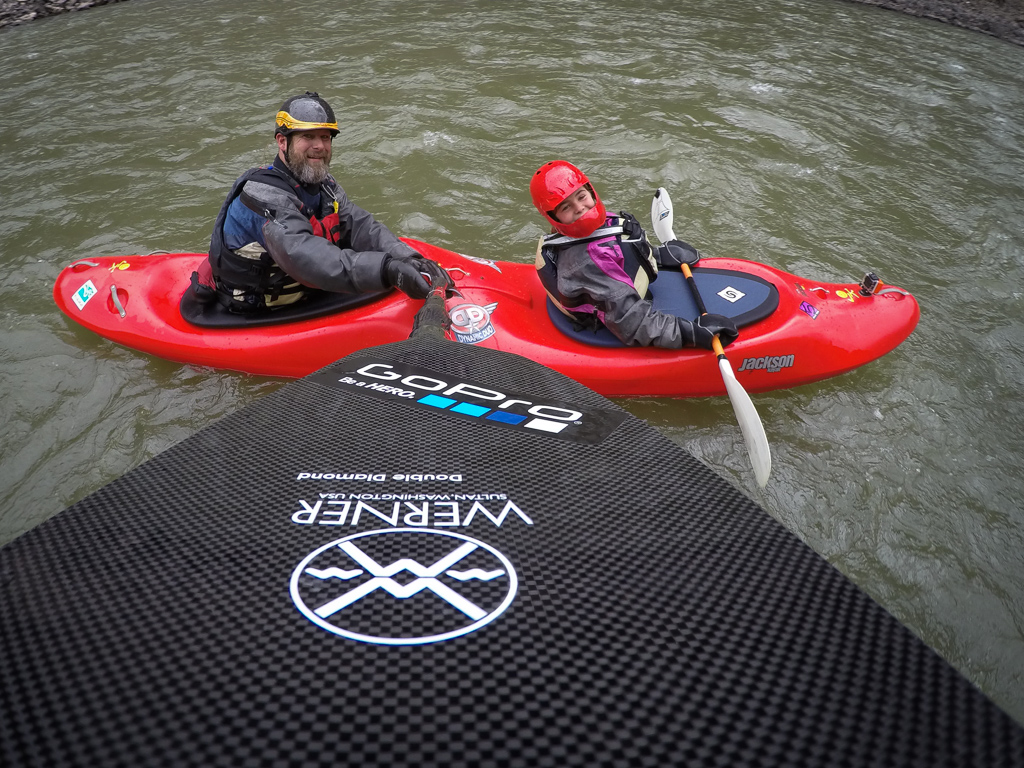 Abby and Peter at the put-in preparing for the inaugural run of Shoshone.

The run starts off with a fairly substantial rapid right off the bat with a steep drop, large powerful waves and several rocks to navigate. As I watched from the shore, I saw Abby completely consumed by the first wave and waited anxiously to see how she would react to what appeared to be a make or break moment that would set the tone for the rest of the run.

Abby is completely consumed by the first rapid on Shoshone

I watched on pins and needles as she shook her head to clear away a face-full of water, and as they pulled into the eddy below the first rapid to regroup, I heard a faint, but emphatic "WAAAAH HOOOO, THAT WAS AWESOME!", echo down the canyon walls. There was nothing but big smiles and voracious fist pumps as Abby and her dad relived each exciting moment through the rapid. 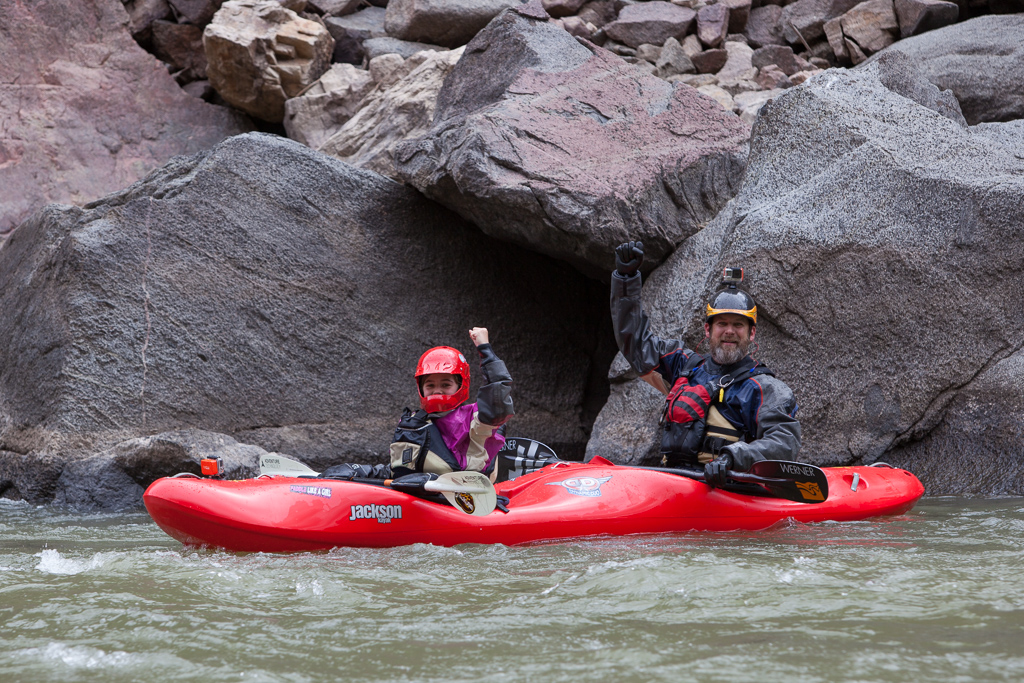 A victorious daddy-daughter celebration after masterfully navigating the first rapid.

After that, the remainder of the run was filled with joyful chatter as Abby and her daddy charged toward the biggest waves and sought out technical paths through narrow channels between rocks in lieu of easier more straightforward trajectories. 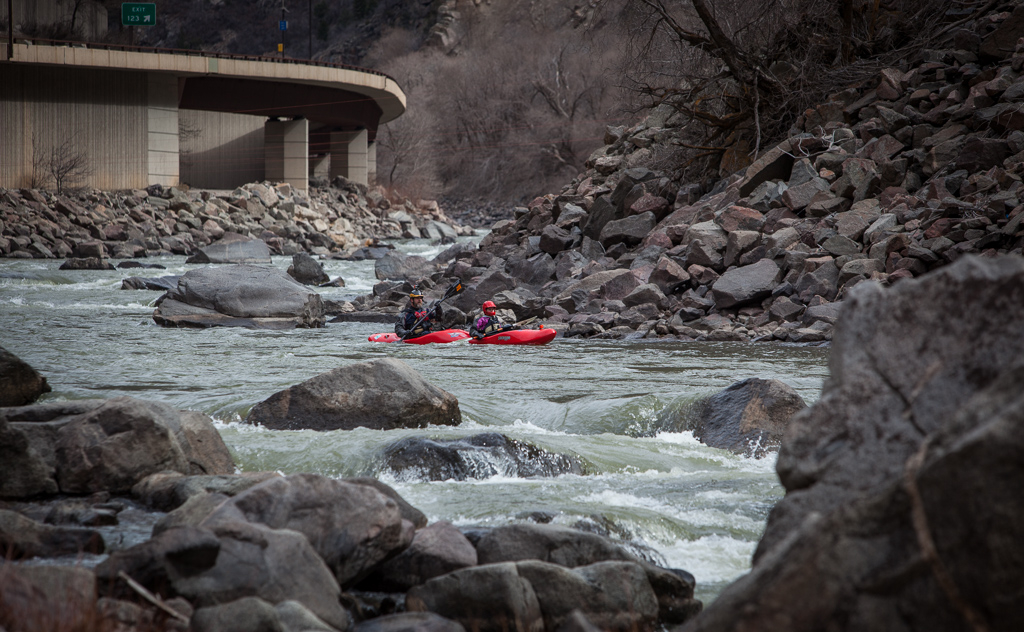 The dynamic duo navigating a rocky section of the river

For Abby, the legend of Shoshone was demystified that day, and her love of kayaking grew just a little stronger. And who knows, maybe next year she will follow in her father's frozen footsteps on New Year's Day and brave the slushy water and icebergs and create her own arctic adventures to share around the campfire.

Abby catching air after charging through a particularly powerful rapid.