The Delights of Hoosierland

In the fall of 2012, my wife Terry and I set out with a mix of excitement and apprehension on our first motorhome trip in a new Navion. It was a 6,000-mile cannonball into the deep end of the pool for the two of us with each and every stop carefully planned and plotted for the four-week voyage.

Now, 80,000 miles and two Navions later, our most recent trip shows how far we've come, not in miles, but in mindset. Paint-by-numbers travel planning has given way to plein air impressionism.

In mid-September we found ourselves rolling across I-80 on the way to an RV industry event in Elkhart, Indiana. It was here that Winnebago would be introducing three exciting products. It was a grand success and you can read more about it by clicking here.

Throughout most of the summer, while I worked on the product launch event, we cut back on some of our RV travel. Now, that assignment completed, we were up for a little road adventure. The only thing we knew was that we needed to be back in Denver in ten days. Now what?

When you eliminate National Parks, scenic wonders, tourist must-sees, family, and friends from the planning calculus, you find yourself with old-fashioned paper maps, and an iPad for fast web and Wikipedia searches. Such is ad hoc travel planning. And that's how we fashioned a remarkably entertaining journey.

Indiana had always been a drive-through state for us and so we figured that, as long as we were there, we'd find out what the state had to offer. Our travel criteria were pretty simple: stay off the freeways, don't spend the entire day driving, look for biking opportunities, and be inquisitive. In some ways, our travel plan (or lack of it) embodied the romantic, but rarely practiced, view of throwing yourself into the wind. Our spin-the-bottle equivalent was GPS roulette played by always choosing the alternative route presented by our onboard Rand McNally Xite infotainment unit.

We were in the northern part of the state and had a vague idea of a few points of interest. Studying the maps, we plotted a path that drifted roughly south through the center of the state and then west.

Just outside of the South Bend/Elkhart area, we began with a couple of nights in Shipshewana. This is the heart of Amish country and never before had we seen so many of the locals rolling by with the clip-clop of hoof-powered carts. We had chosen this starting point because of the Pumpkinvine Trail which is a paved rails-to-trail that winds through stretches of forested areas, homes, and small prosperous farms. The trail connects the towns of Shipshewana and Middlebury and actually runs along the back of the Winnebago Towables plant (it's big!). Along the way, we'd occasionally nod to Amish residents who were walking or riding bikes along the path (horses and carts not permitted). We noticed quite a few large well-kept Amish homes with only a one car garage, but a large stable and cart barn adjacent to it.

Summer was still winning the tug-of-war with fall, and even though we were in the third week of September, we were happy at the self-generated breeze of pedaling through 90+ degree heat. That, of course, required a mid-point deflection at a Dairy Queen that truly was conveniently right on the path. We slowly cooled off with measured sucks of Blizzards to avoid brain freeze. 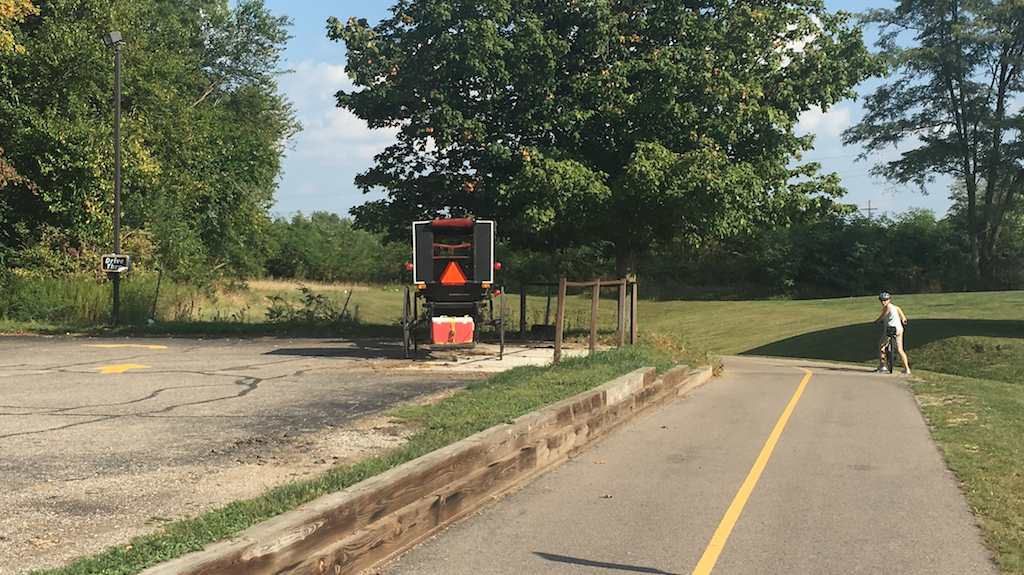 The Dairy Queen drive-thru is conveniently on the Pumpkinvine Trail and offers horse-cart parking for the locals.

Next to us in a corner booth, a half dozen young teenage girls, engaged in lively conversation, crowded around the circumference of the table. Their language sounded sort of Germanic sprinkled with English words of celebrities and brands. It was puzzling and later on during our trip we learned that in some of these more concentrated Amish areas, locals also speak in a mix of Germanic-based language that's often referred to as Pennsylvania Dutch. 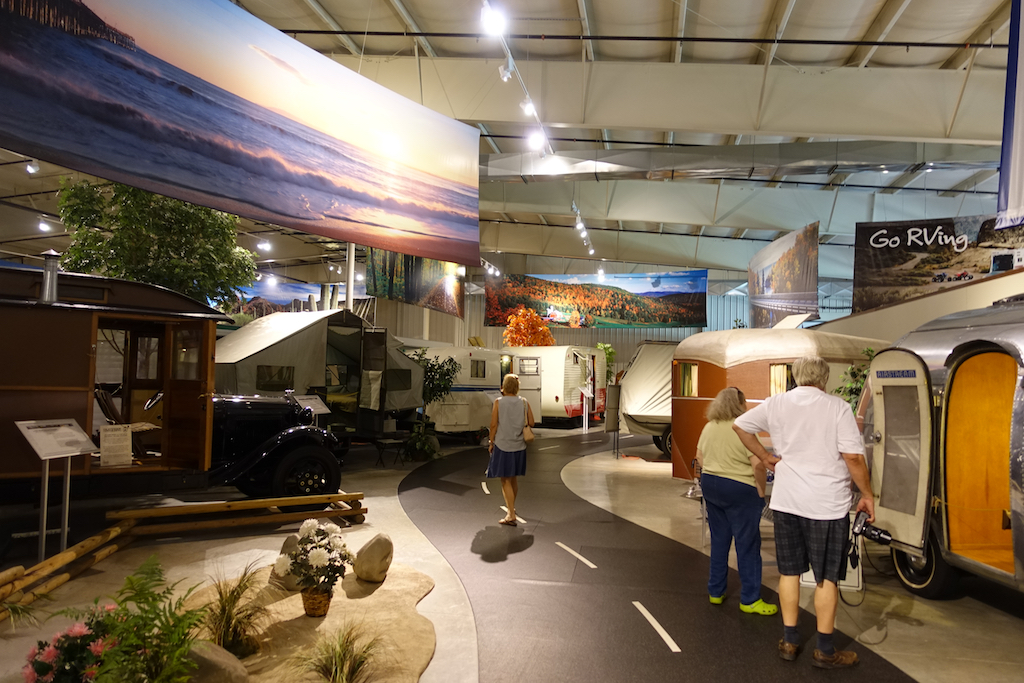 A walk through time with early RVs at the RV/Motorhome Hall of Fame really makes you appreciate all the benefits of 21st-Century travel, like cell phones and GPS displays.

On the morning of our departure from the Elkhart area, we couldn't leave without an obligatory trek to the RV/Motorhome Hall of Fame. With the largest concentration of RV manufacturers in the country, it's not a surprise that the industry would create a venue for self-congratulation and promotion. They got it about half-right. The historical tour of RVs is both interesting and fun. But, whether through limited vision or funding constraints, the opportunity to present the industry today (and of the future) falls pretty flat. Nonetheless, it's worth a one to two hours go for any RVer. And, not surprisingly, you can stay overnight in the parking lot for free.

An abbreviated afternoon drive pushed our southern line toward Indianapolis with an indirect stopover at the small town of Delphi. The town's population is just under 3,000 and it sits along a couple of preserved sections of the Wabash-Erie canal. While this easily could have been a boondockable stay on a normal September evening, the outside temperature was high enough that we sought an electric-only hook-up (an outlet on the outside of a town park maintenance barn) to run the air conditioning without the generator.

We were up early to beat the heat for biking along the canal, over the Wabash, and into the rolling countryside. As we departed late morning for the final 40-mile drive into Indianapolis, we drove by the local high school with a big sign proclaiming it to be: Delphi High School "The Home of the Oracles." Why not? 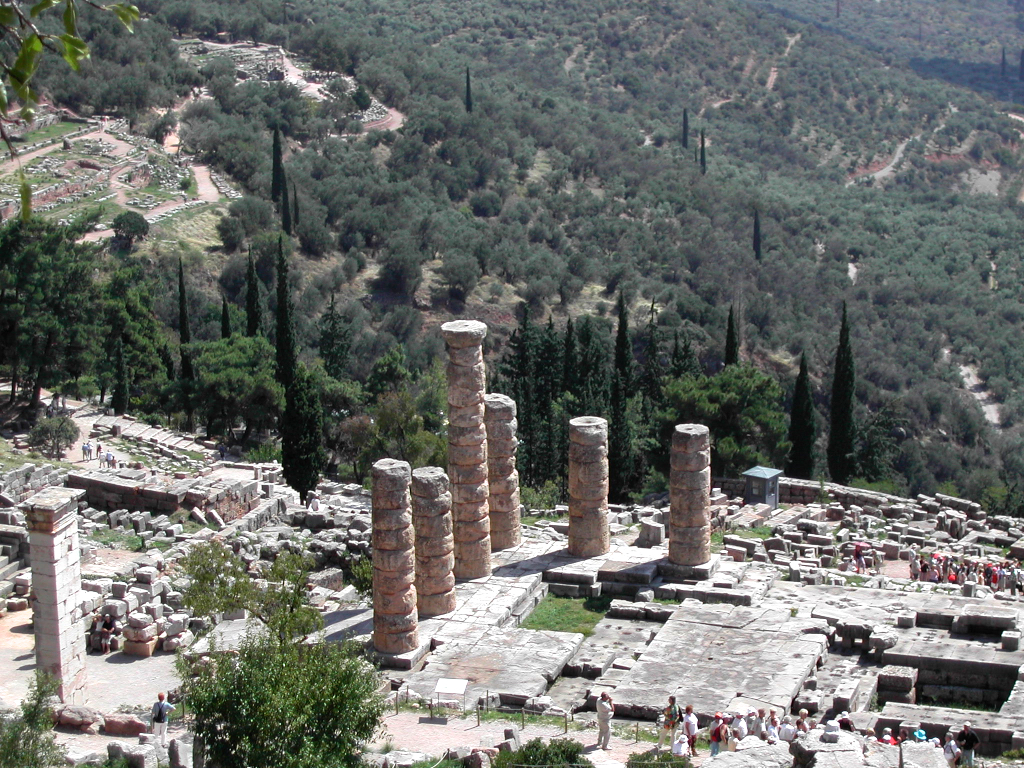 The original namesake is 5,000 miles away. In 2002, we were in Greece and actually visited the town of Delphi (locally pronounced as del-fee). These are the remains of the oracle's temple.

Like most larger American cities, RV camping is more on the periphery of the metro area, but in Indianapolis, you can get a year-round hook up at the large state fairground complex. 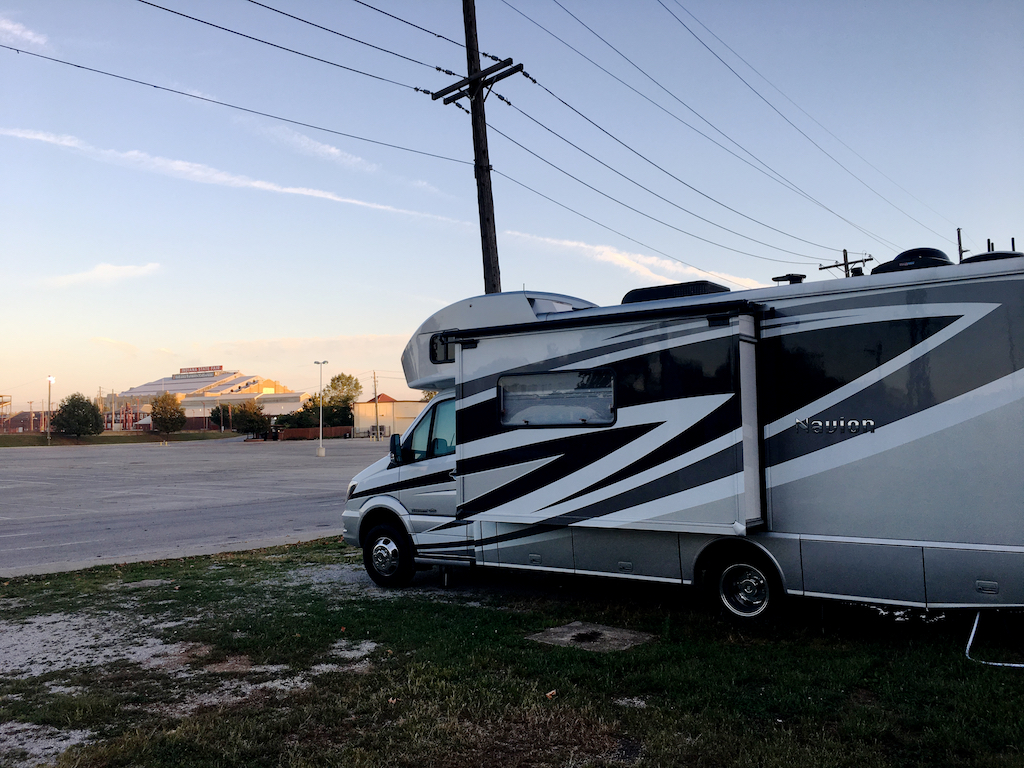 Fancy it isn't, but if you've got bikes with you, it's an ideal location because it's directly adjacent to the Monon Trail. 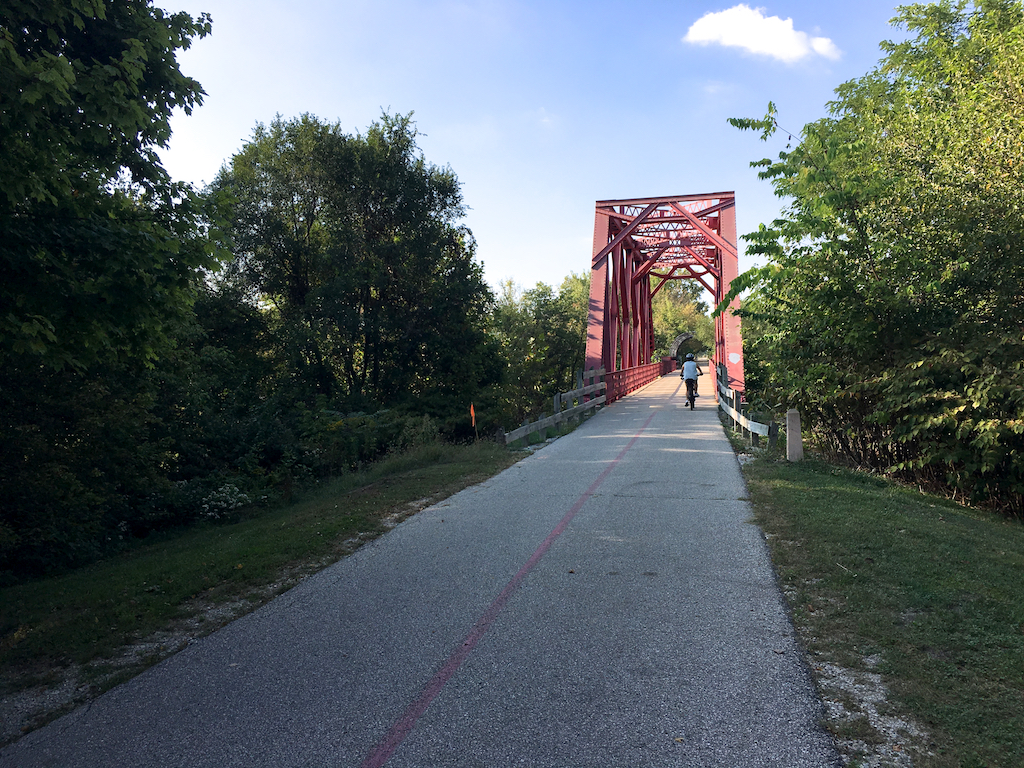 The Monon is an 18-mile paved rail to trail that, from the fairgrounds is an easy and quick seven-mile ride south into downtown Indy. 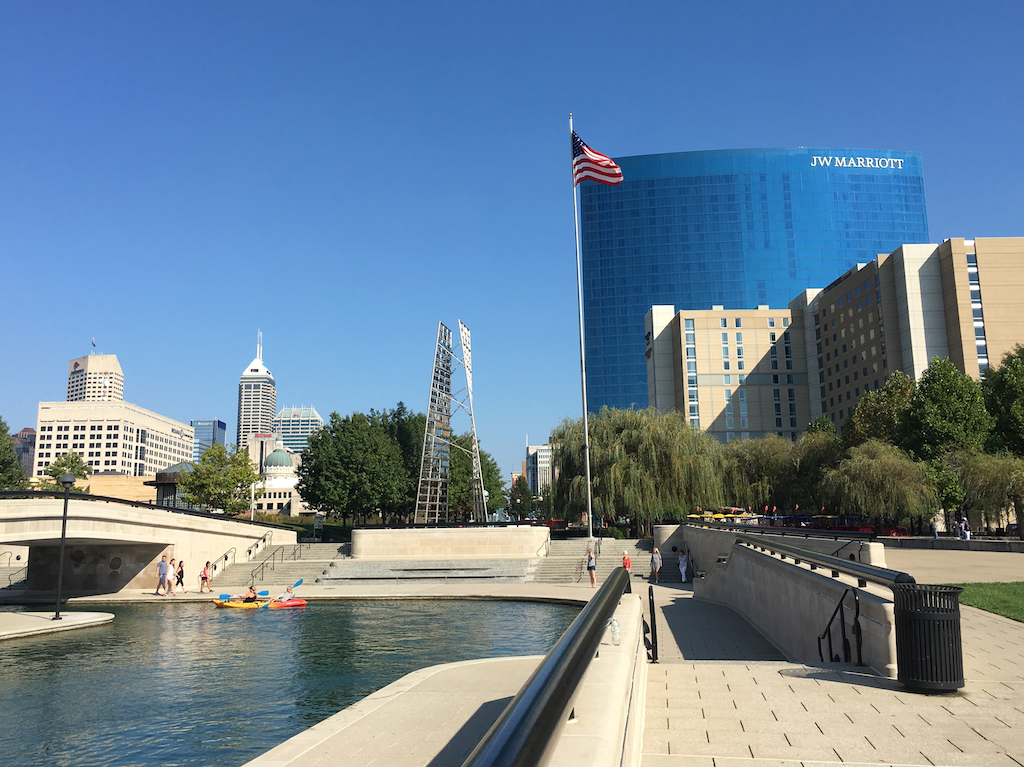 It connects with a recently completed ring of a downtown loop (path, sidewalk, street) called the Cultural Trail. It's a great way to see the city center. 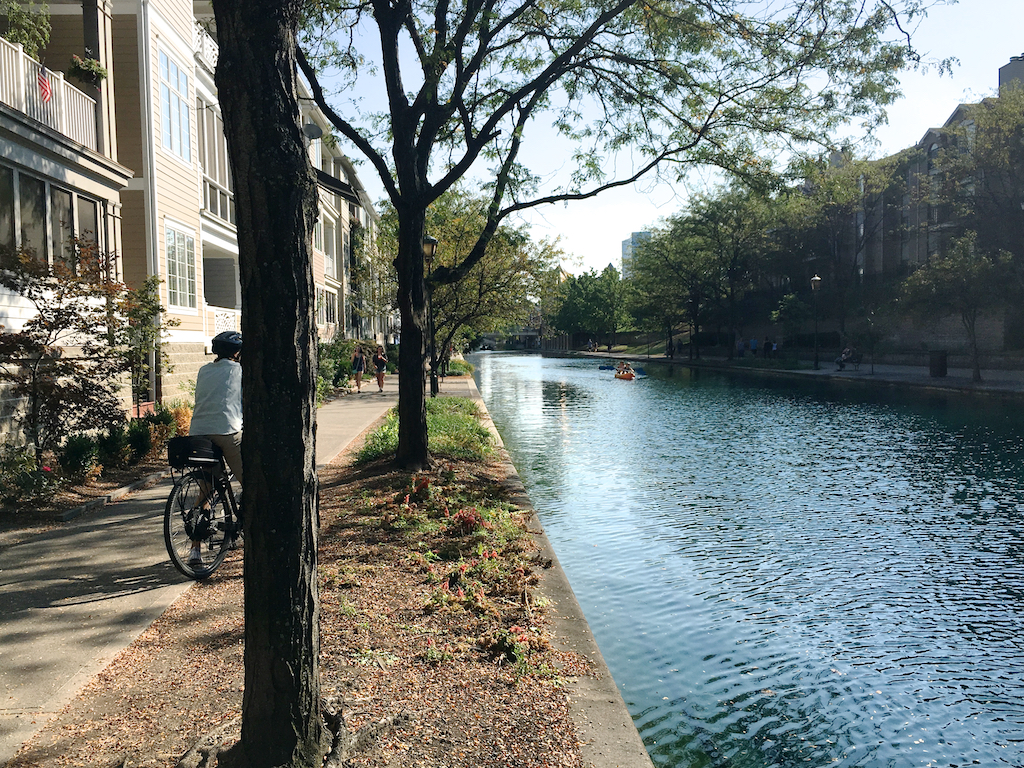 It's not Venice, nor San Antonio. This refurbished canal is adjacent to downtown Indy with many new apartments and condos. 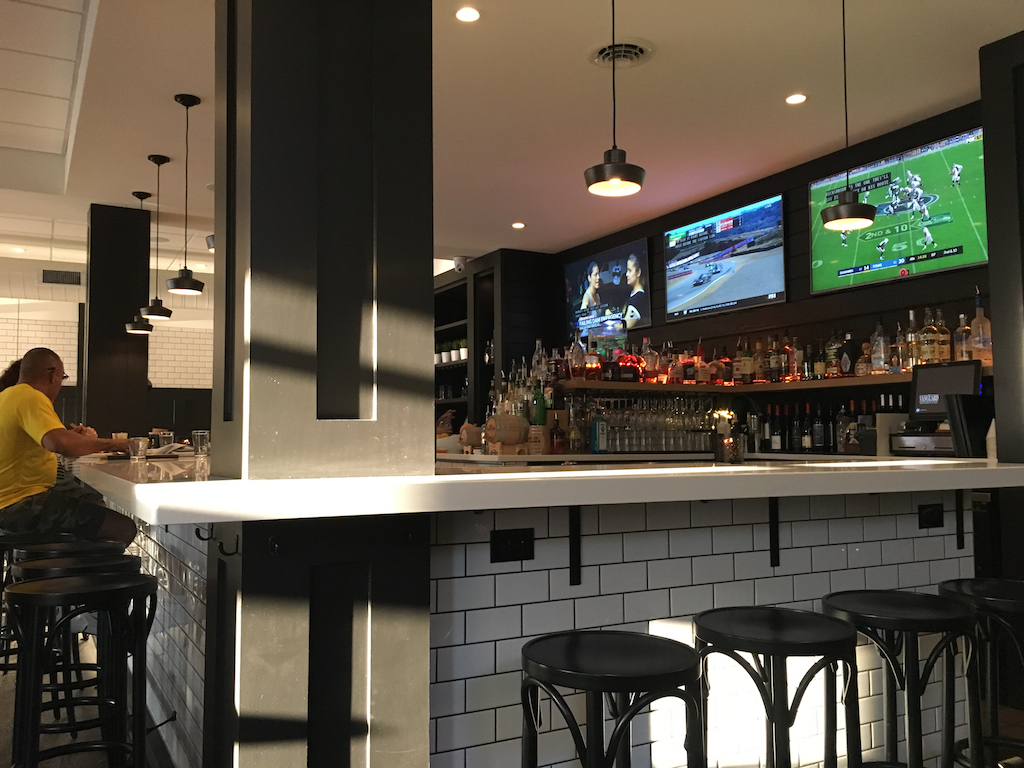 We also ventured north up the Monon and one evening steered off the bike path in the gentrified neighborhood of Broadripple for an excellent dinner and some early Sunday evening live jazz at The Vanguard. Our weekend in Indy left us with the impression that this is a city definitely on the upswing.

About 50 miles south of Indianapolis is, arguably, one of the great small cities of America: Columbus, Indiana. It has a population of around 50,000 and is the corporate home of Cummins (diesel engines). What sets Columbus apart is the symbiotically enhanced relationship the company has had with the community. Going back to 1942, Cummins made the commitment to invest in world-class architects to design both civic and commercial buildings, and the cumulative effect is altogether charming and impressive. 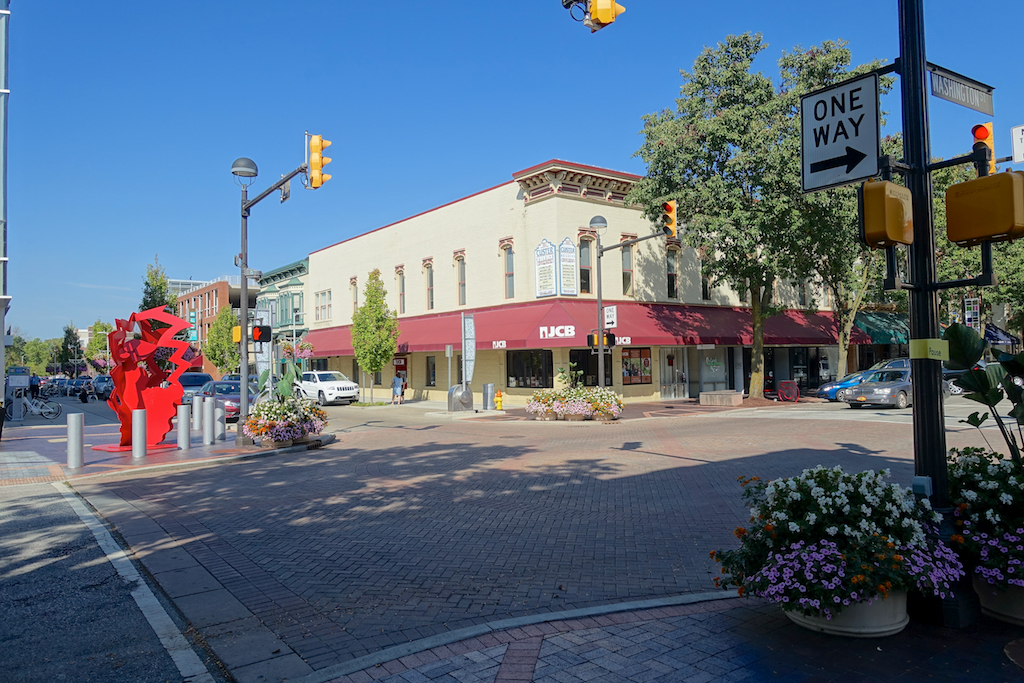 The downtown main street has a near movie-lot quality to its shop and building fronts. 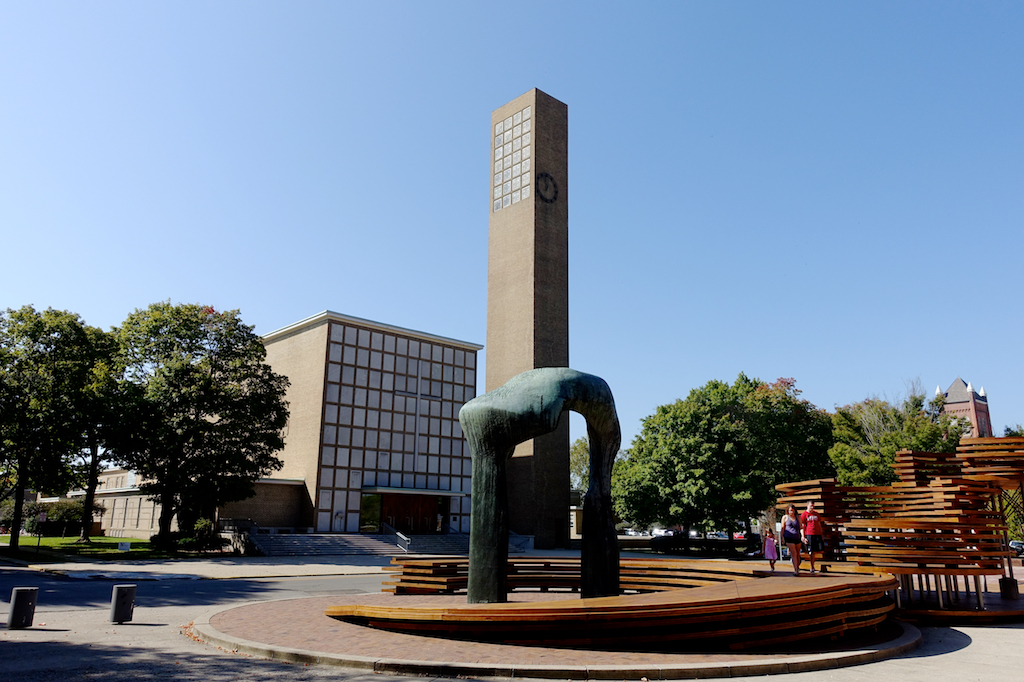 A Henry Moore sculpture sits in front of the I.M. Pei designed library (not pictured) across from a 1940's Usonian style church. 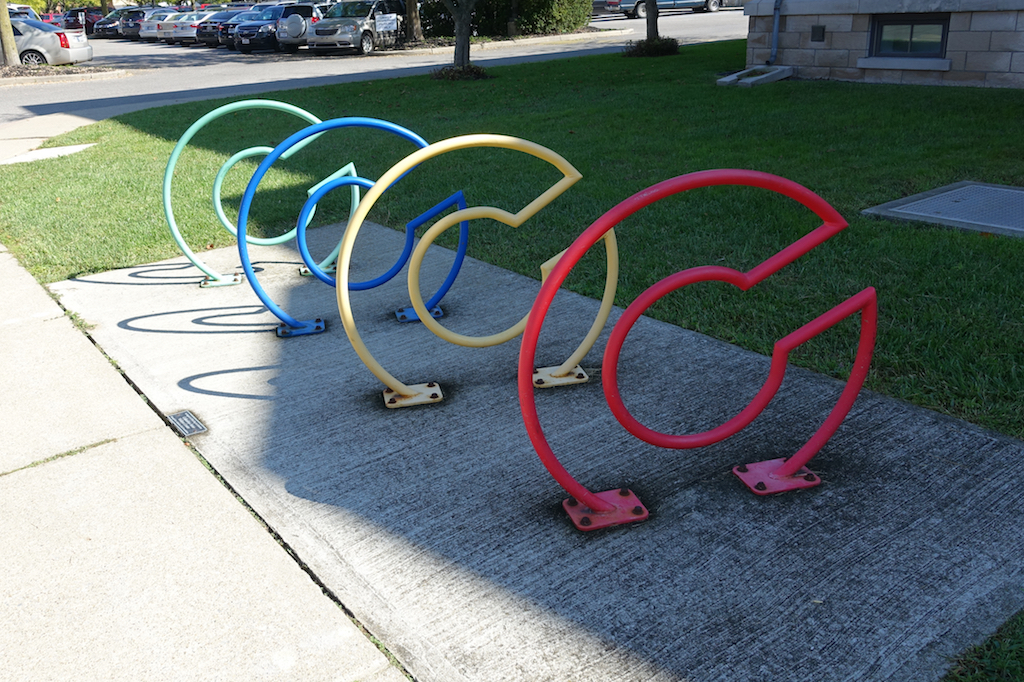 The city's "C" logo is shaped in steel curves that serve as bike racks. 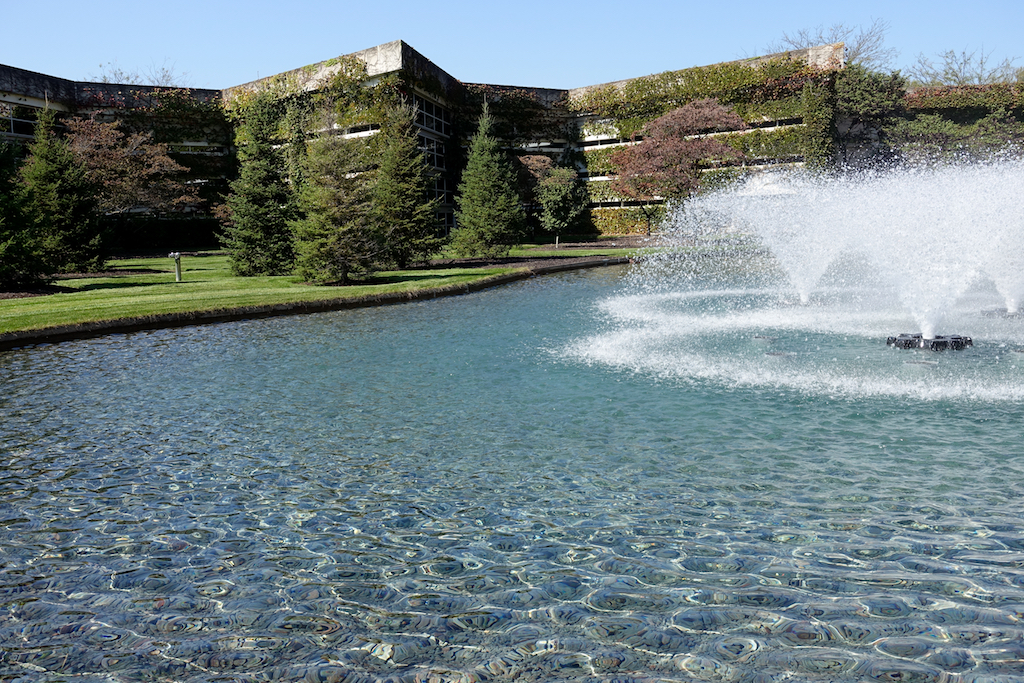 And the Cummins headquarters is a tranquil low-rise building that artfully erases the hard line between architecture and nature. Together a drive and stroll through town are well worth the freeway exit time.

From Columbus, we headed due west through the rolling forests of Southern Indiana, past the beautiful campus of Indiana University at Bloomington, and then southwest toward Evanston, Indiana which wraps around a huge bend of the Ohio River. 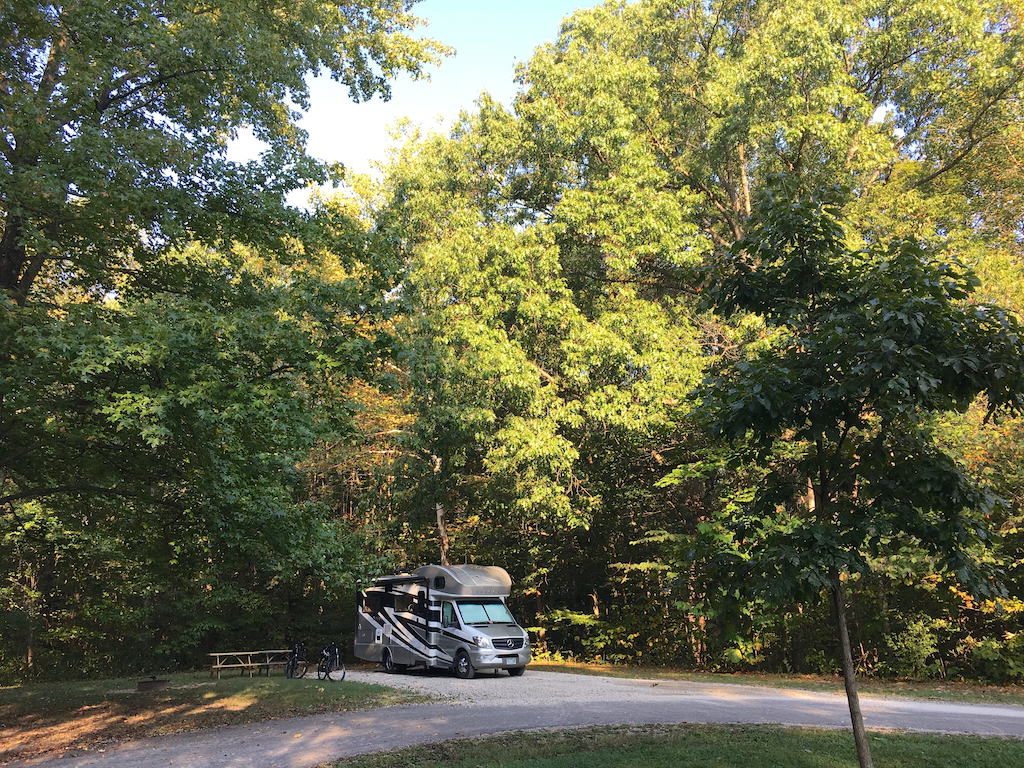 Our final destination was at the heavily forested New Harmonie State Park near the small town of New Harmony that sits on the banks of the Wabash River on Indiana's western border right across from Illinois.

There's a lot of fascinating history about New Harmony and that's what brought us there. When it was founded in 1814, this was the "far west" of the fledgling United States. As its name intones, New Harmony was created with higher social aspirational goals in mind. 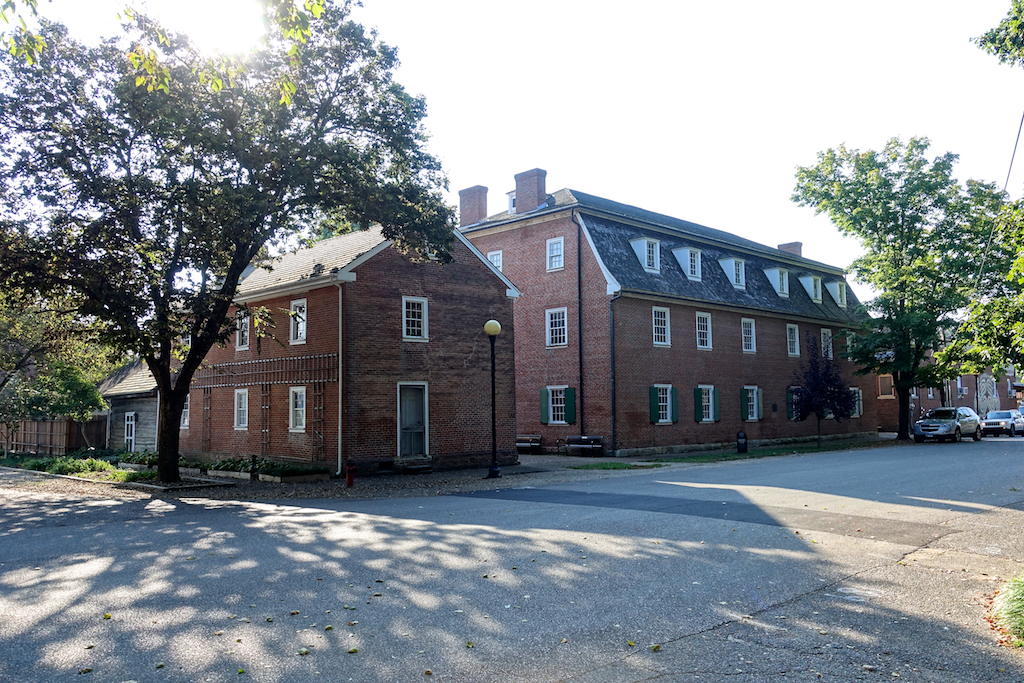 Colonial-period English manor design made its way to the western woods of Indiana. Note the old-timbered cabin behind the two-story brick building.

Its full-time population numbers less than 1,000, but its historical imprint of utopian thinking has rippled through history with scientific, social and educational effect. Notably, there are several locations worth exploring and lingering. 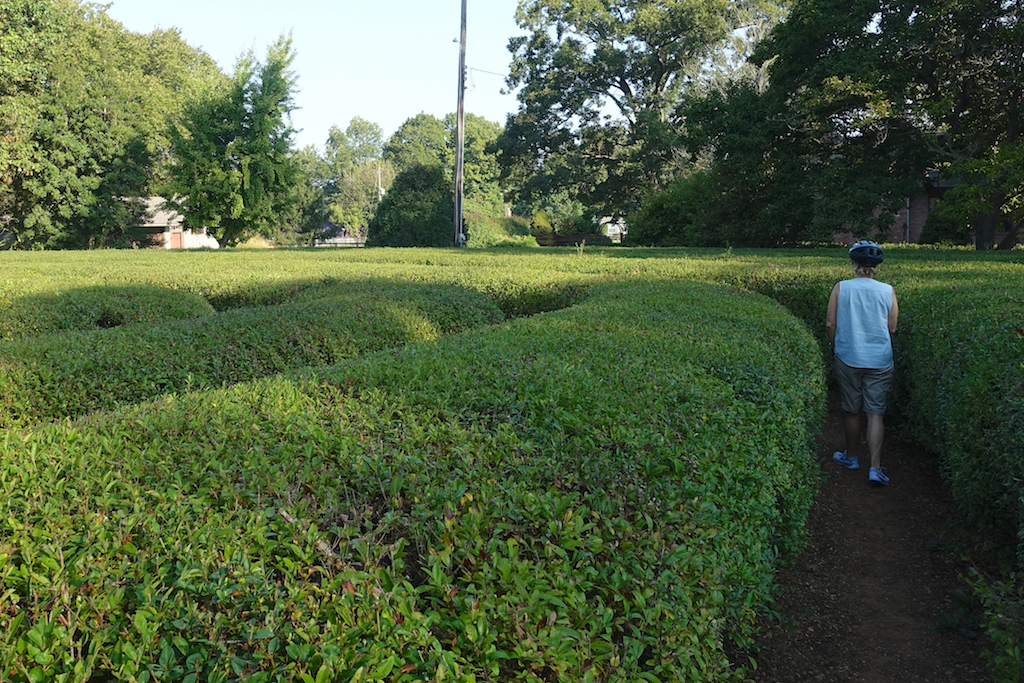 In town is the Labyrinth, which was constructed as a contemplative maze in the 1930's and rebuilt based on historical documents in 2008. 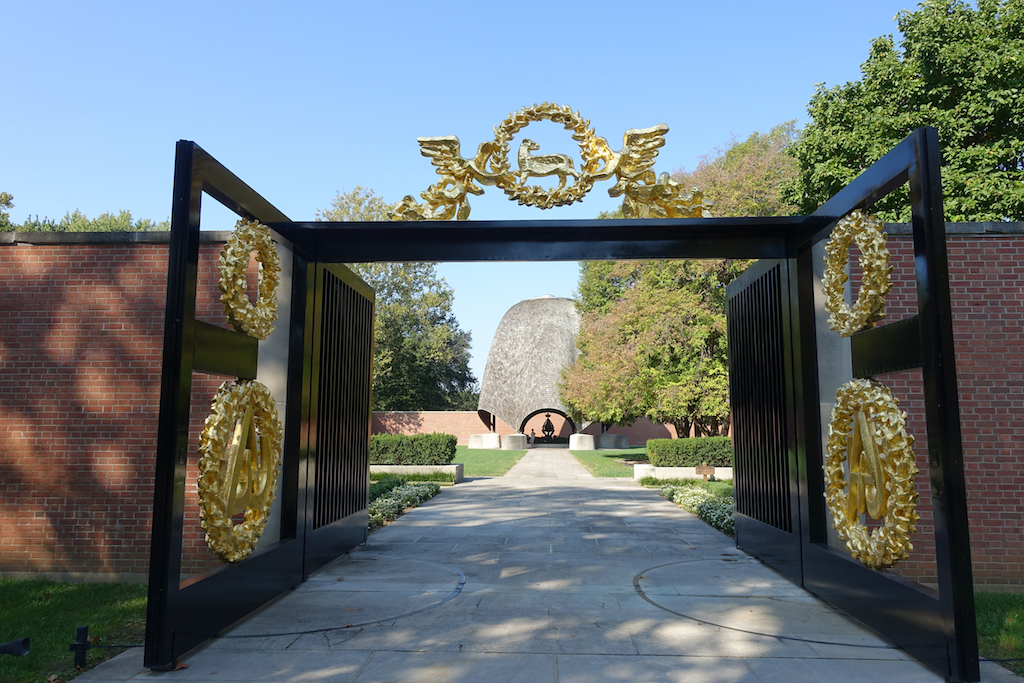 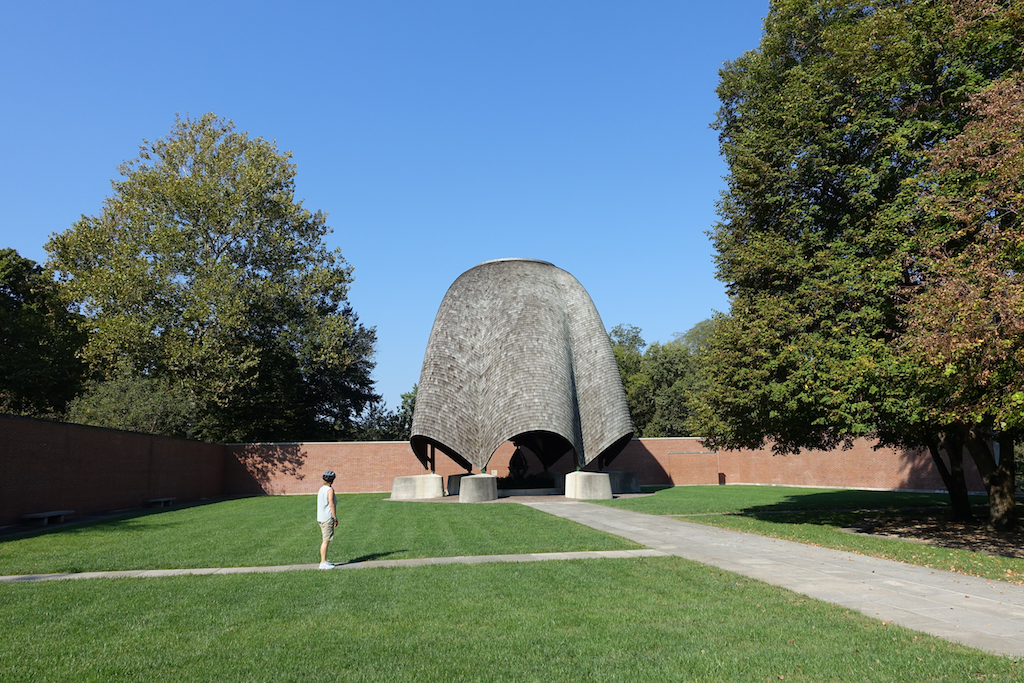 A few blocks away, on the north side of the town, is the Roofless Church that was designed by noted architect Philip Johnson in 1960. 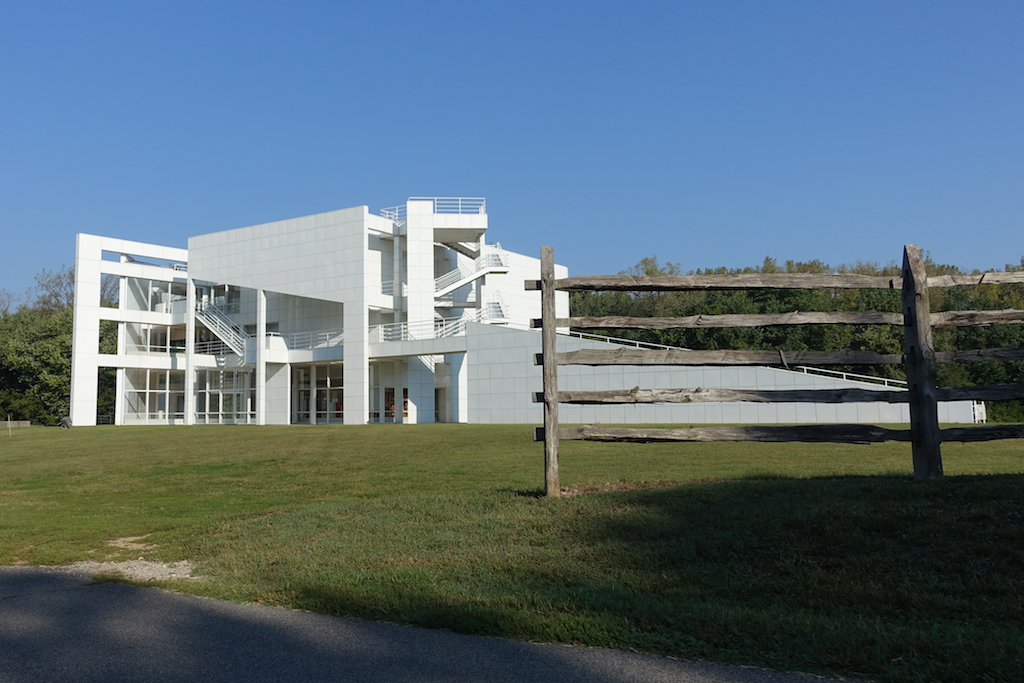 Nearby are the preserved early settlement cabins with ax-cut timbers, and just beyond is the Atheneum which was designed by Getty Museum architect, Richard Meier in 1979. This startling collection of buildings attest to the spirituality and enduring power of human aspiration that they exist lovingly honored in a tiny community far from the greater energy of larger towns and cities.

As an example of departure from the thicker lines of the freeway map, New Harmony, and our other week's worth of discovery throughout Indiana, remind one of the greatness and endless fascination of the American story. Now, with five years and 80,000 miles in the rearview of RV travel, we're sure we've only begun to scratch the surface.