Mt. Rushmore. Crazy Horse. Deadwood. Sturgis. Even if you haven't been to the scenic Black Hills you've heard of these destinations. But what about the George S. Mickelson Trail? Probably not.

Running for over one hundred miles from the southern base of the Black Hills north to Deadwood ran an old Burlington Northern line. It was abandoned in 1983 and in 1991 then Governor Mickelson dedicated the first six miles of the path. Mickelson died before he could see his vision fully realized in 1998 and in his memory the trail was named after him. It was a fitting thank you for his tireless work to make this recreational gem a reality. 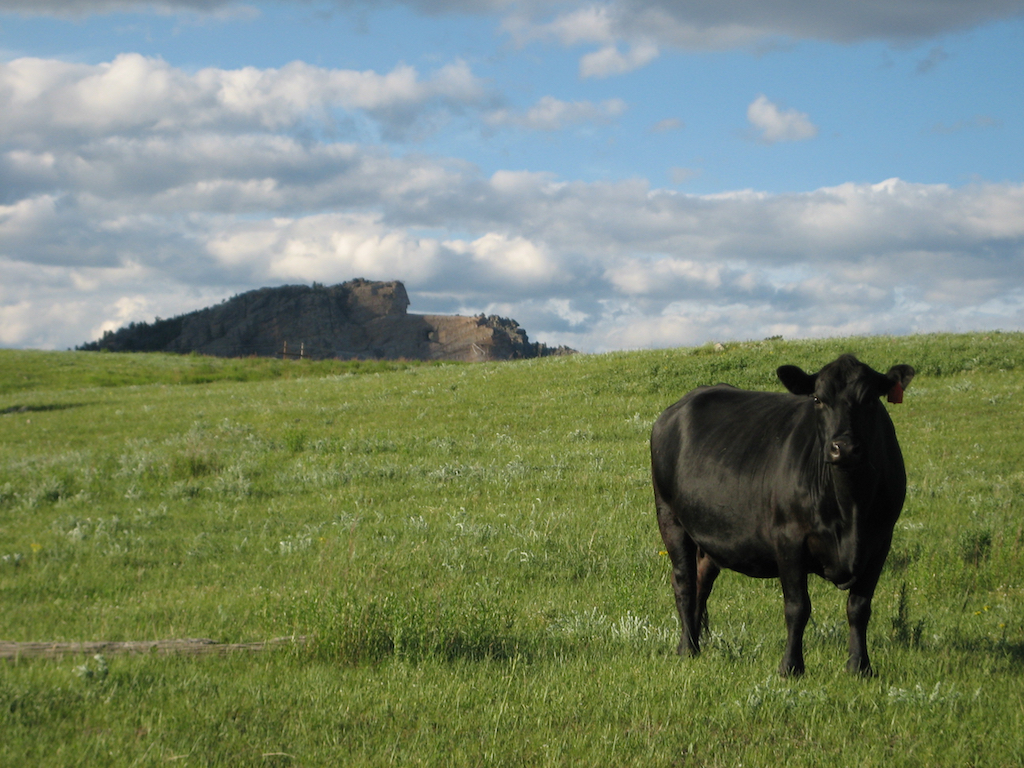 Still life with cow. In the distance you can see the outline of Chief Crazy Horse's head start to take shape.

Over ten years ago in our pre-RVing days we first learned about the Mickelson trail on a car trip to the Black Hills. We stayed in Custer and rolled our bikes onto the trail at the edge of town one evening. We had no idea what we were getting into. It was a beautiful evening in late May and the gentle ride was pretty magical with deer grazing in the valley and small herds of cows gathered in pine rimmed meadows. A few miles up the trail we stopped for a rest and there, a few miles to the east, I could clearly make out the emerging image of the Crazy Horse monument in the distance.

Since then we've done some light cycling across other abandoned railroad grades, but perhaps because it was our first experience of this type of riding, the Mickelson remained special in our memories. Now fast forward to this summer when we finished a great Winnebago Outdoors Adventure trip to Lake Superior. With an open calendar and no particular preference on how we'd return to Denver we found ourselves heading west on I-90 through South Dakota. We were seeing a steady stream of motorcyclists, motorcycles on pickup beds, motorcycles on trailers, and toy hauler fifth wheels carrying. . . motorcycles. A quick mobile Internet search confirmed our suspicion that the annual Sturgis rally was a week away as many pilgrims were rolling west to the earplug inducing rendezvous. While their movie might have been "The Wild One," ours was a little more like "The Silence of the Bikes."

That put us in mind for veering off I-90 and heading southwest into the Black Hills. Terry searched on Allstays for a campground near Hill City and landed on the Black Hills Trailside Park Resort. 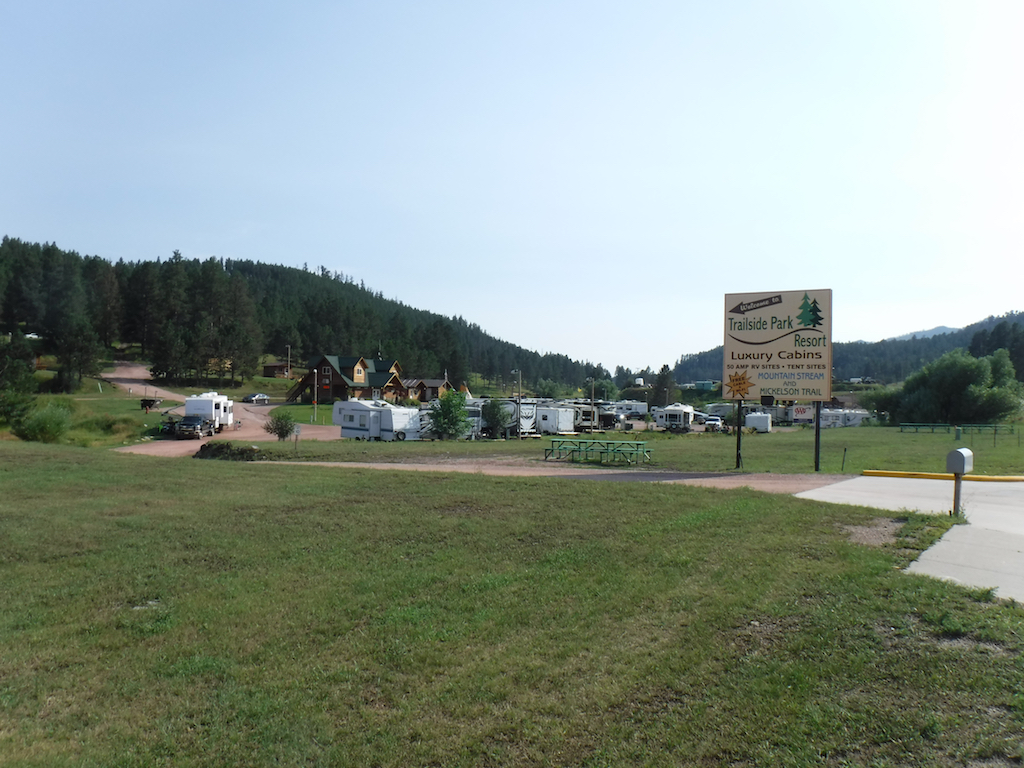 The Trailside Park Resort is less than a ten minute walk into Hill City. The Mickelson trail runs right behind the main office.

I've written earlier about my feelings on how loosely the word resort is used in RV campground marketing. And while one might question using "resort" in the park's name, it was clean and had decent hook-up sites, but best of all the Mickelson trail practically went right through the park. Though we had our tow car with us another plus was that the campground was located less than ten minutes from the center of town which made it a pleasant walk to and from the Desperado restaurant for dinner (reasonably priced and decent quality). 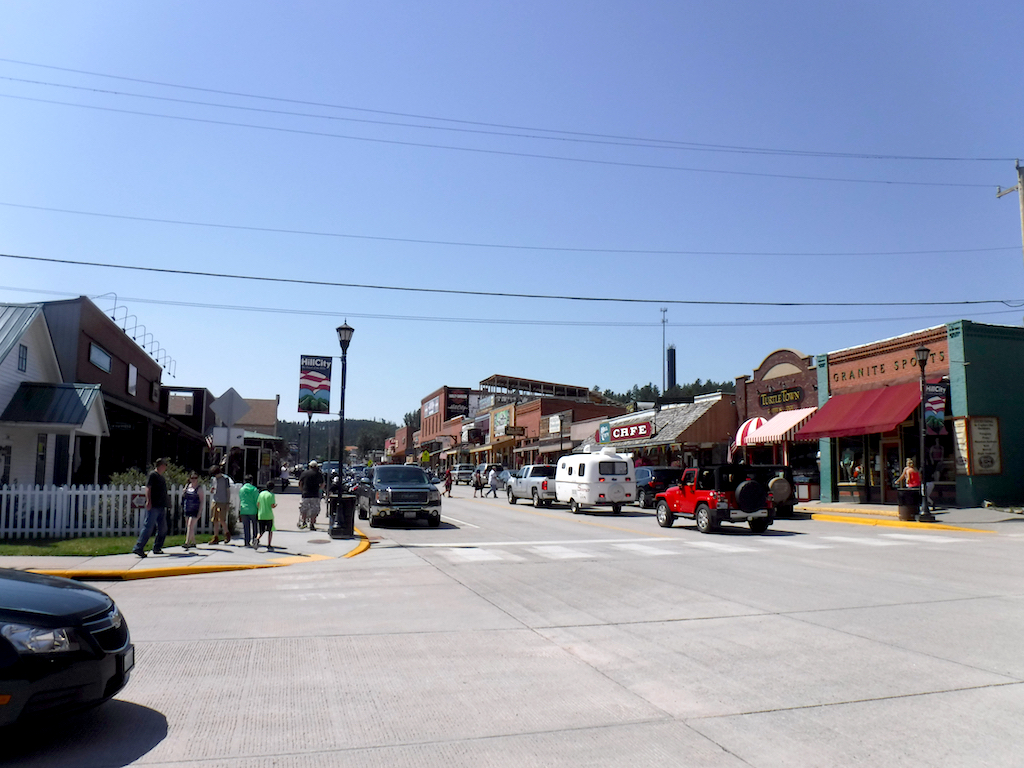 Hill City is a good central point to ride the trail in both north and south directions. 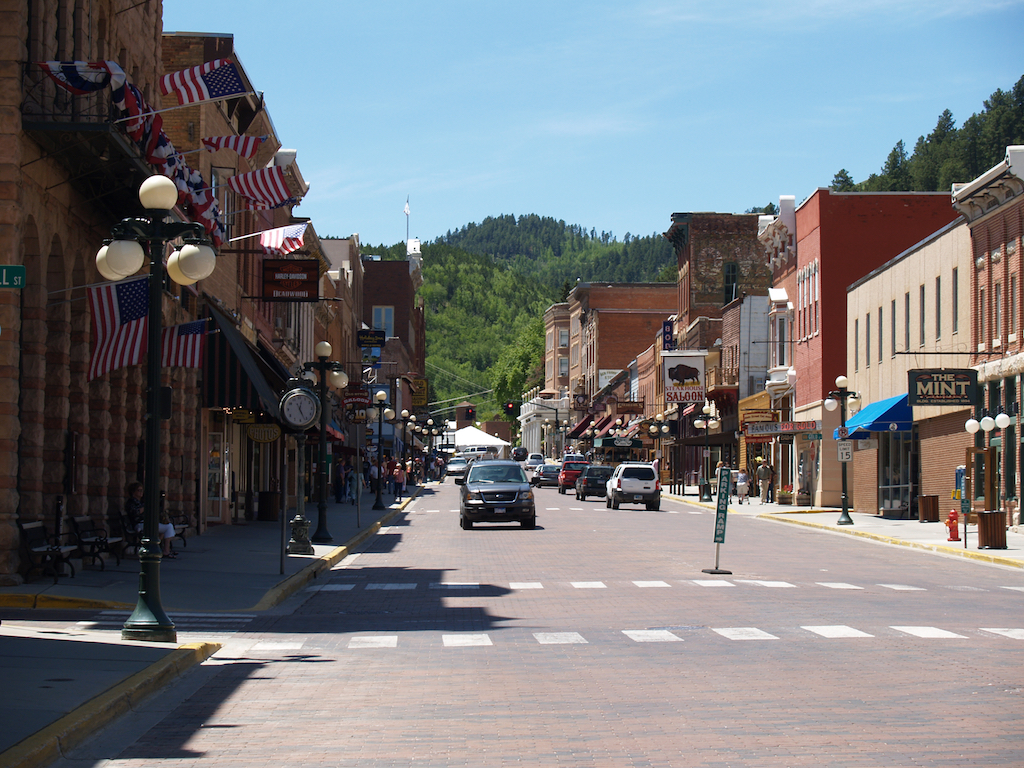 Deadwood is at the north end of the trail. 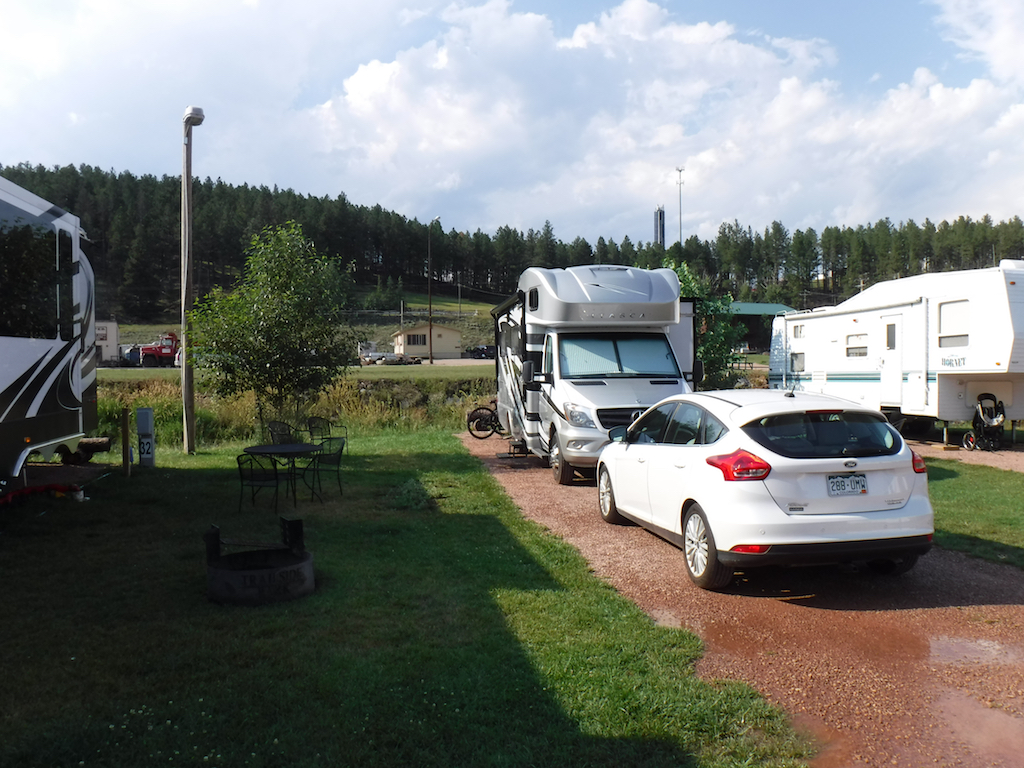 Bike base camp. Notice the cell tower in the background? Forget wi-fit, we rocked 20MB AT&T LTE service in the Navion.

The next morning we headed north on the trail for about 13 miles (26 miles round trip). The old grade took us by homes, ranches and pine forests. We set a simple destination of going through two tunnels before we'd turn around and ride back to Hill City. The trail is well maintained and is fairly hard packed. There's a $4 dollar fee per person, per day to help with maintenance with self-pay stations at the trailheads and at many local merchants. 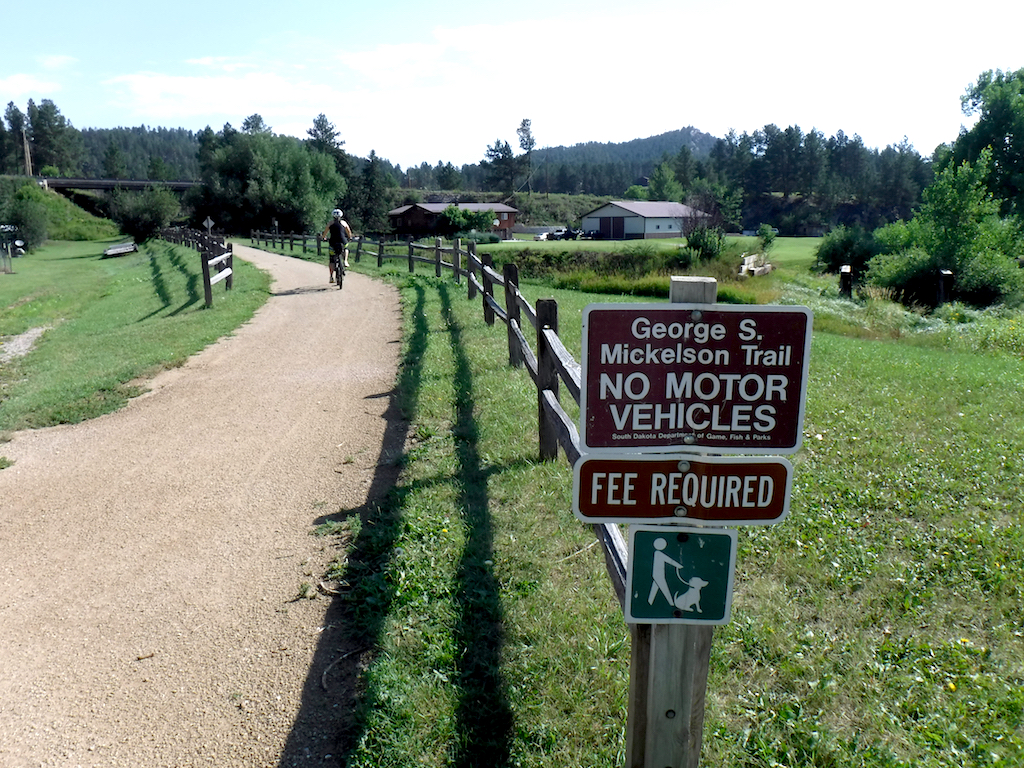 I'd recommend either an urban hybrid or mountain style bike with heavier tires. Lightweight road bikes would more than likely have tire problems. The railroad grades are no more than 4.5%, but before you think that's not much more than flat, be warned that some of the grades relentlessly climb for several miles before descending. 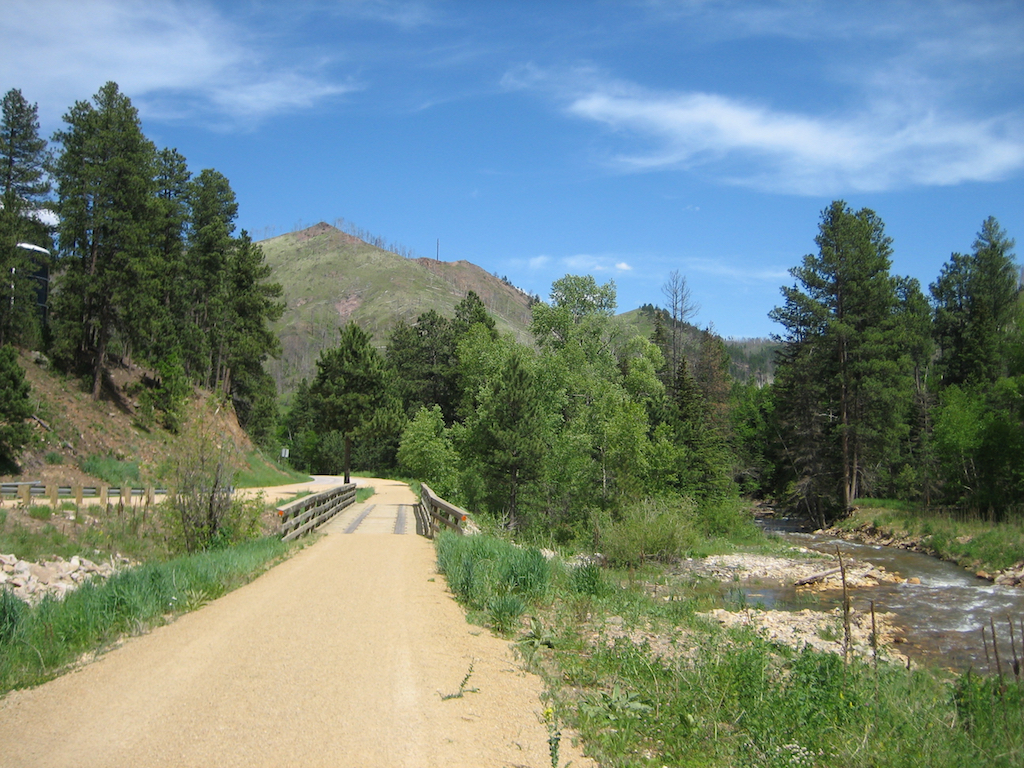 It can be tougher than it looks and it helps to go when the day is cooler, plus make sure you take some water bottles. Though the trail was primarily designed for bikes, we saw quite a few walkers and joggers along the way.

Ten years ago our urban bikes did fine and I remember pedaling hard at certain stretches on the trail, but not to the point of exhaustion. On this return trip we had our new Specialized Turbo X e-bikes and having the power assist took a great experience and turned it into a sensational-beyond-great experience as we could ride farther and more easily. Nonetheless, we got great exercise and later in the day cleaned our dinner plates. 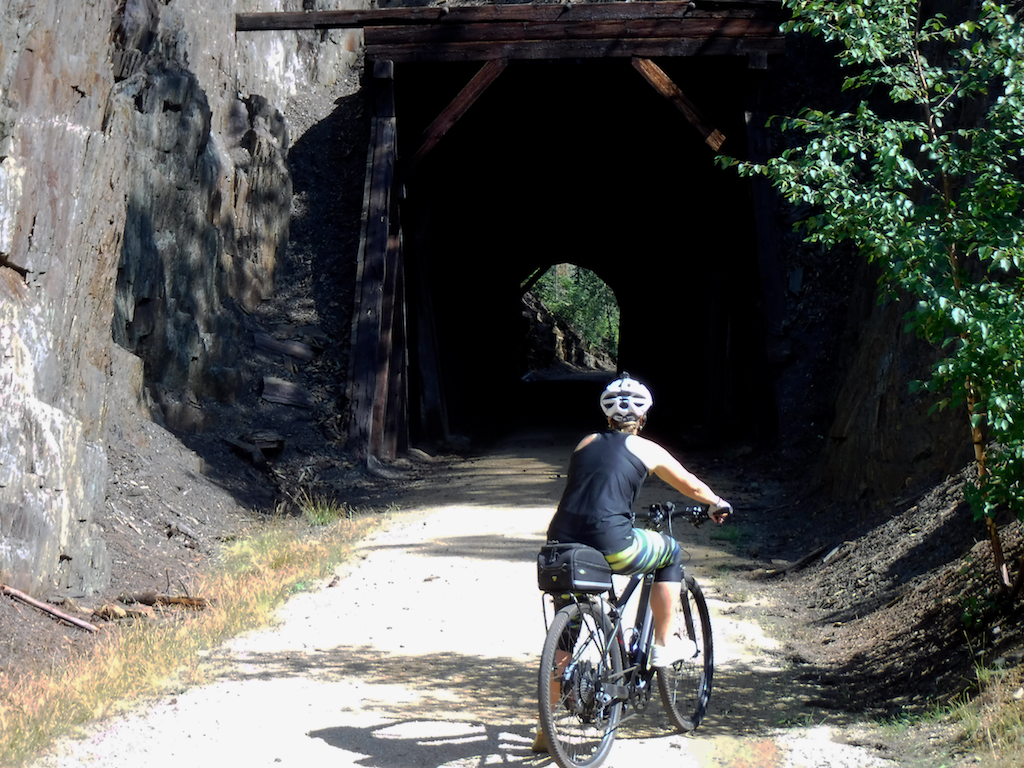 The next morning I did a solo eighteen mile round trip south and up to the entrance to the Crazy Horse monument. The temperatures would climb into the low 90's later in the day, but on the trail the air temp was a cool sixty-five. The air was moist with the scent of pine from the previous night's heavy thunderstorms and in pockets of shadows the storm's marble sized hail had yet to melt. There were no sounds. Only the quiet crunch of my tires on the path or a muted belch of jake brakes from a truck far away on the highway. Crossing the small, clear streams on wood slatted decking would cause my bike to bounce and buck across and force me to ride as if I was posting on an English saddle. Somewhere my inner twelve-year-old whispered for me to go on, go further, top the hill, ride down to the town of Custer. But the adult voice, much lower and louder than a whisper, said, "It's a seven hour drive home and you promised to leave at nine." The adult won out, but the kid will remember the moment.

Bike touring has really added a richness to our travels over the years. From the reverent rides through the battlefields of Vicksburg and Gettysburg, to the rebuilding neighborhood of New Orleans Ninth Ward, and along the hard packed beaches of Hilton Head, all of these rides have left us with great pictures and memories. However, in the middle of one of America's most tourist traveled areas, the Mickelson Trail has a special quiet magic all it's own. It gets two thumbs up from both the adult and his inner child.