From towering high Sierra peaks to neck bending redwoods and sprawling urban carpets, transected by seams of freeways, California is a state of endless exploration. Travelers well know the magnetic draw of the visitors' canon, San Diego, LA, Yosemite, Big Sur, and San Francisco. And with so many layers to reveal, like Russian nesting dolls, we have returned to many of these points again and again.

One of the singular joys of travel by RV is the impromptu elbow room that delinks vacation plans from the exactitude of an airline departure schedule. When the calendar becomes more flexible, and the destination less primary, interesting things happen. 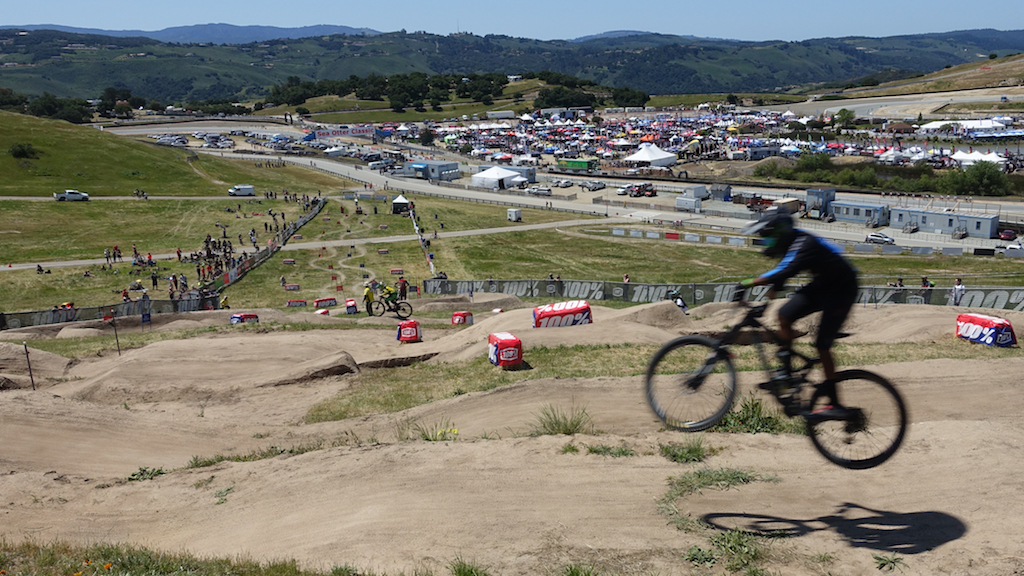 70,000 mountain bikers roll into, around and above the Laguna Seca racetrack at the Sea Otter Classic every spring outside of Monterey, California.

And so there we were in the sunny hills just a few miles east of Monterey at the famed Laguna Seca motorway which, for four days, was ground zero for seventy thousand mountain bike enthusiasts and a dozen Winnebago owners. We were contemplating our return route to Colorado.

Geography has a knack of interrupting the straightest line of terrestrial navigation and as I studied a return route home, California's most storied pathway became the most evident route to follow the line of overland emigres and the transcontinental railroad along I-80, and through the Sierras, across the Donner Summit. Smack dab in the middle of that route line was Sacramento.

To non-Californians perhaps our first understanding of Sacramento comes in the elementary school exercise of properly naming the capitals of all the states. Into adulthood, the city periodically emerges through the din of national news, "Today in Sacramento Governor (fill in your favorite high visibility politico here), announced that. . . ." Alrighty then. Sacramento. Government. That's about it, isn't it? But, of course, there has to be more. So with a couple of slack days in the schedule, it was time to turn a drive-by into a destination.

Before leaving Monterey, one of our Winnebago campsite neighbors, and avid cyclists got wind of our plans and were quick with two key recommendations: make sure we rode our bikes on the American River trail and definitely check out Old Sac. Some quick internet travel searching revealed an RV park at the CalExpo fairgrounds that, conveniently enough, was on the American River bike path. 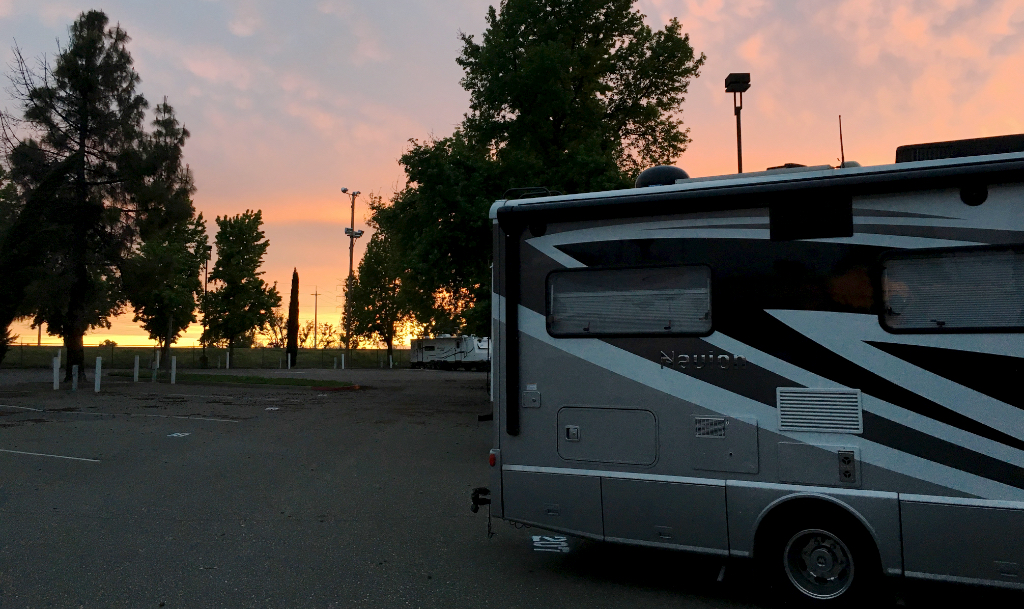 Nothing fancy for an RV park, but the hook-ups worked and the sunset added a moment of charm.

The CalExp RV Park is at the southeast corner of the sprawling fairgrounds. It's basically a pedestal and parking lot affair. Nothing fancy, but it offered full hook-ups and adjacent proximity to the American River Trail (also known as the Jedediah Smith Memorial Trail) which is a lovely 32-mile paved path that runs from downtown Sacramento east to the town of Folsom. We rode about half the distance of the trail that runs through numerous parks which, on a Sunday afternoon, were filled with picnickers, family get-togethers, walkers and fellow bikers. 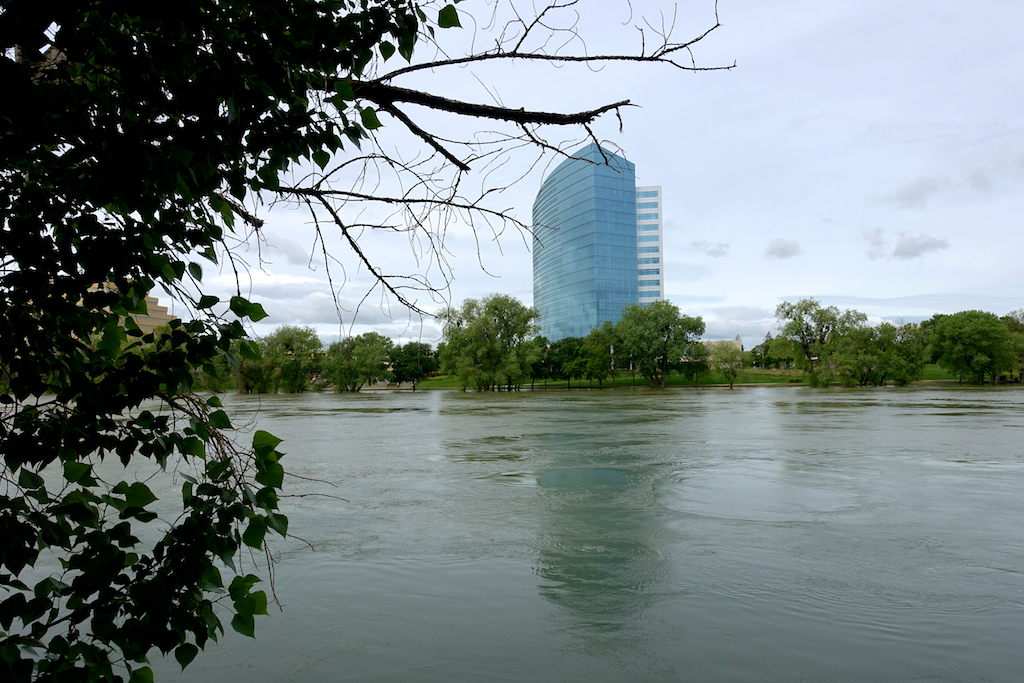 The American River bike trail runs for 32 miles from downtown Sacramento to the town of Folsom.

More often than not, rivers define where civilization takes root and Sacramento is no different. From Jedediah Smith's early fur trapping explorations to the 1849 gold rush, the confluence of the Sacramento and American Rivers has been a landmark, pathway, and neighbor to the city. With the discovery of gold, the city of Sacramento became the staging point and transit corridor as three hundred thousand "forty-niners" came across the Sierras or disembarked from the port of San Francisco in their mad quest to seek fortune near Sutter's Mill in Coloma which is about 30 miles southeast of the city.

The discovery of mineral wealth usually ends in one of two ways -- a ghost town or a city. In Sacramento's case, the gold discovery sparked a more permanent regional commerce that, over decades, was transformed by abundant agriculture.

And though long ago eclipsed by larger coastal California cities in size (though it's no slouch at 2.5 million residents), Sacramento remains anchored at the heart of California history as the seat of government of a state, that many proudly tell you, would be the sixth-largest economy in the world. And that also makes state government far and away the largest employer.

It's about a twenty-minute drive from the RV park into downtown Sacramento. Our plan was simple - we would walk through Old Sacramento and then head south for a few long blocks to the capitol, have lunch and then return back to Old Sac for a tour of the California State Railroad Museum. 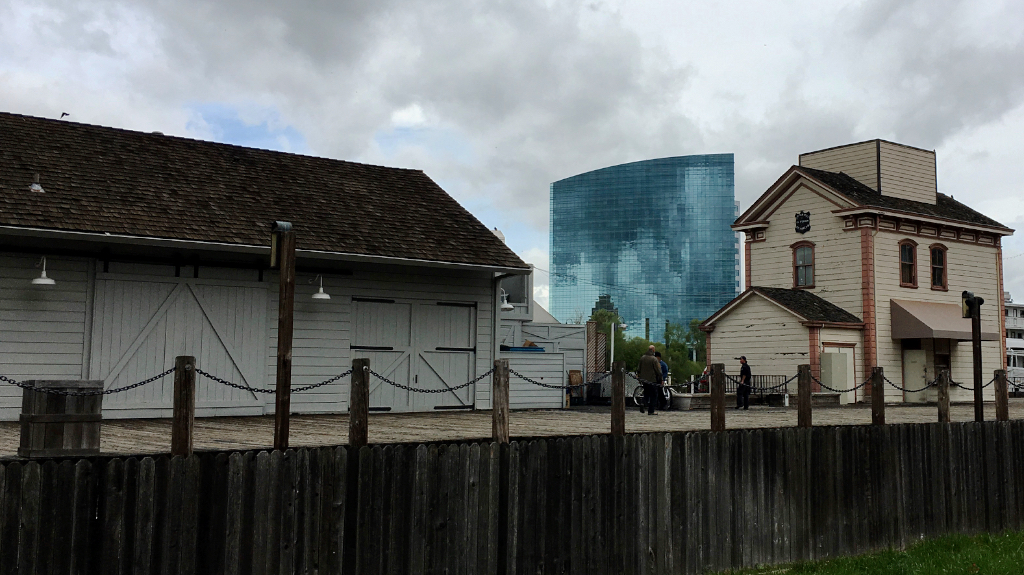 Old and new. �The old riverboat dock has been restored across the river from modern office buildings.

Old Sac reminded us of many other American cities where, sometime in the 1960's, civic leaders figured out that the town's original buildings, then run down and ramshackle, shouldn't be razed, but refurbished and repurposed. Today that early western history of shops and riverboats sparkles anew and is certainly more well kept and clean than the pungent, mud-spattered, horse and wagon days. 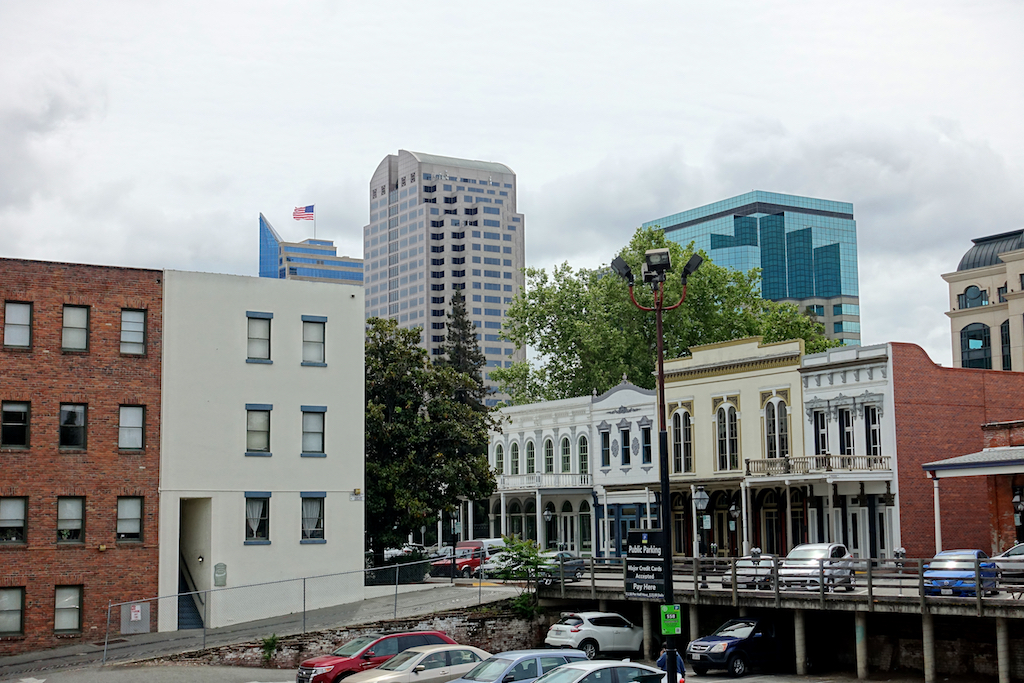 Storefronts that a century and a half earlier purveyed picks, shovels, and hard tack, now offer standard tourist essentials from candy and t-shirts to boutique gifts and restaurants.

Walking south along a long divided boulevard toward the capital we felt a relaxed sense of quiet with a slowly building swell of people wandering out from the various government buildings to find a park bench or nearby restaurant for lunch. We chose a modern, glassed-in restaurant for an at-the-bar light lunch and observed a mixture of patrons, with permanent name tags or employee badges, at tables fully engaged in a variety of conversations. It felt very similar to lunch crowds in Washington D.C., but with the more laid back dress and vibe of the west coast.

Like most government buildings the Capitol is open to the public. And, as is the practice these days, a full security check is required before entering. We were struck by the friendliness and welcoming attitude of the security staff which was a nice way to begin our own self-directed wanderings through the building. As we walked down a couple of hallways to the main rotunda, we passed by windowed exhibits from all of California's fifty-eight counties. Smaller counties created their dioramic displays clearly as a school project. Bigger ones, like Los Angeles, must have hired an ad agency. Viewing all these displays reminds one of how many Californias there are. 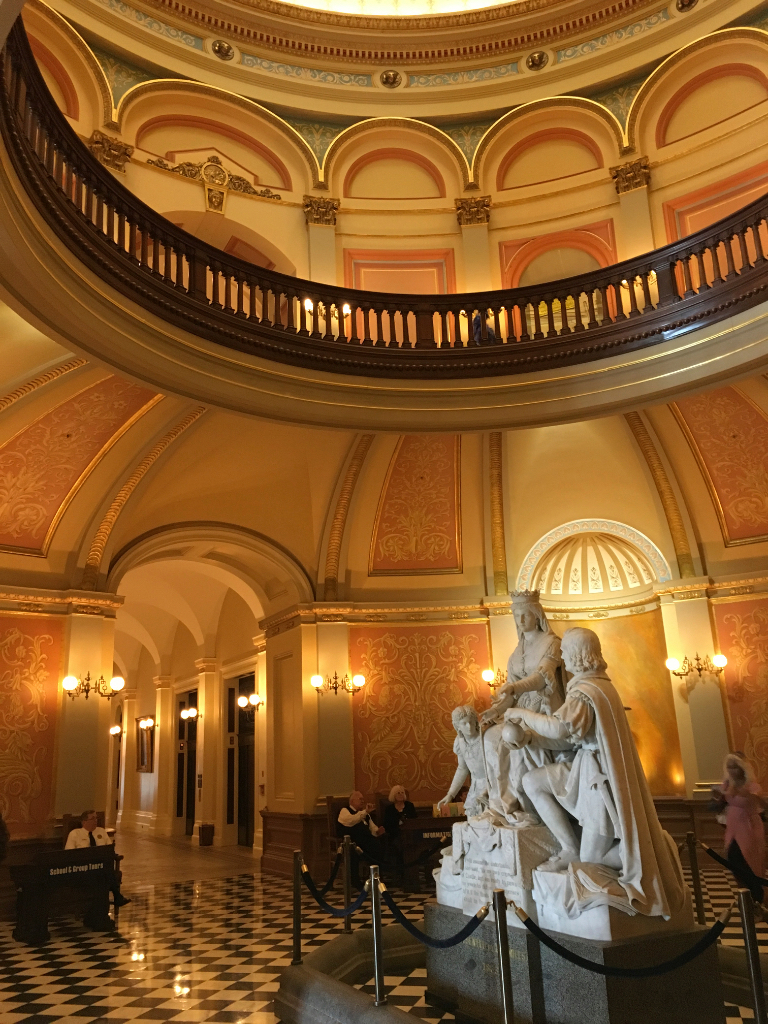 In the center of the rotunda sits a surprising classical statue of Queen Isabella of Spain giving Columbus his travel assignment. A state-paid docent happily explained the origin of the statue (short form: it was a thank you gift from a generous businessman) and answered some of our other questions like, "where's the Governor's office?" 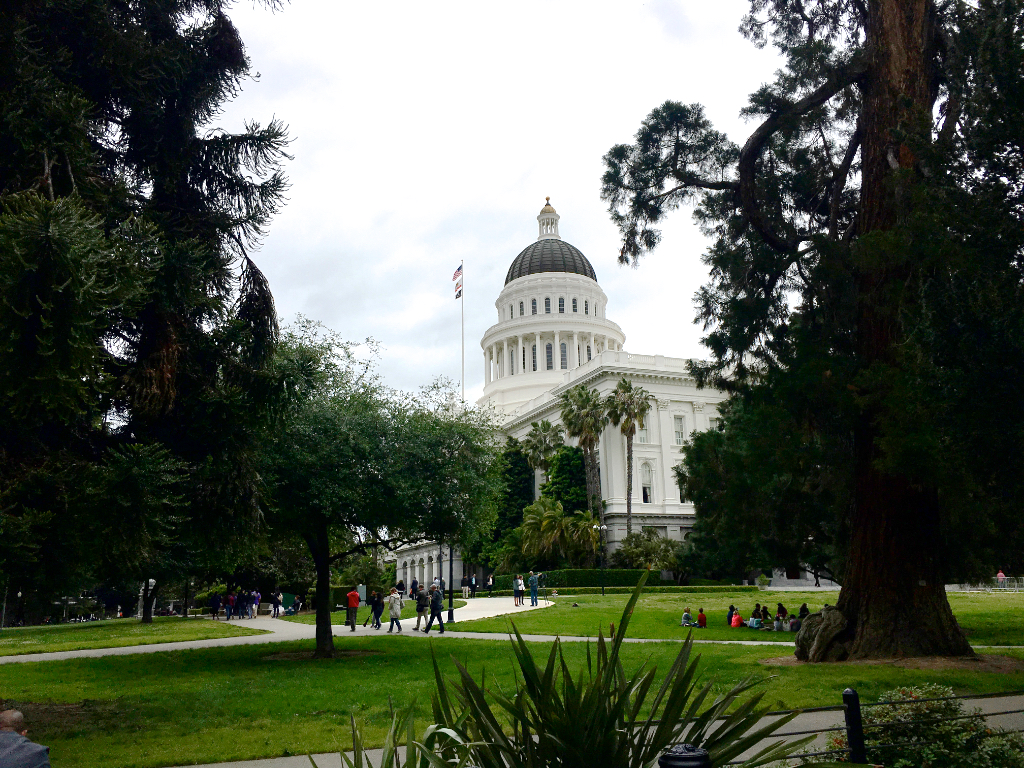 School groups, tourists, lobbyists and legislators are all in and around California's classically designed Capitol building.

As we walked out of the Capitol and around the richly landscaped surrounding park areas it was interesting to see both pine and palm trees side by side. Continuing back to Old Sac the wide, quiet streets, lower office buildings, and apartments gave the Capitol area the feel of a comfortable college campus. 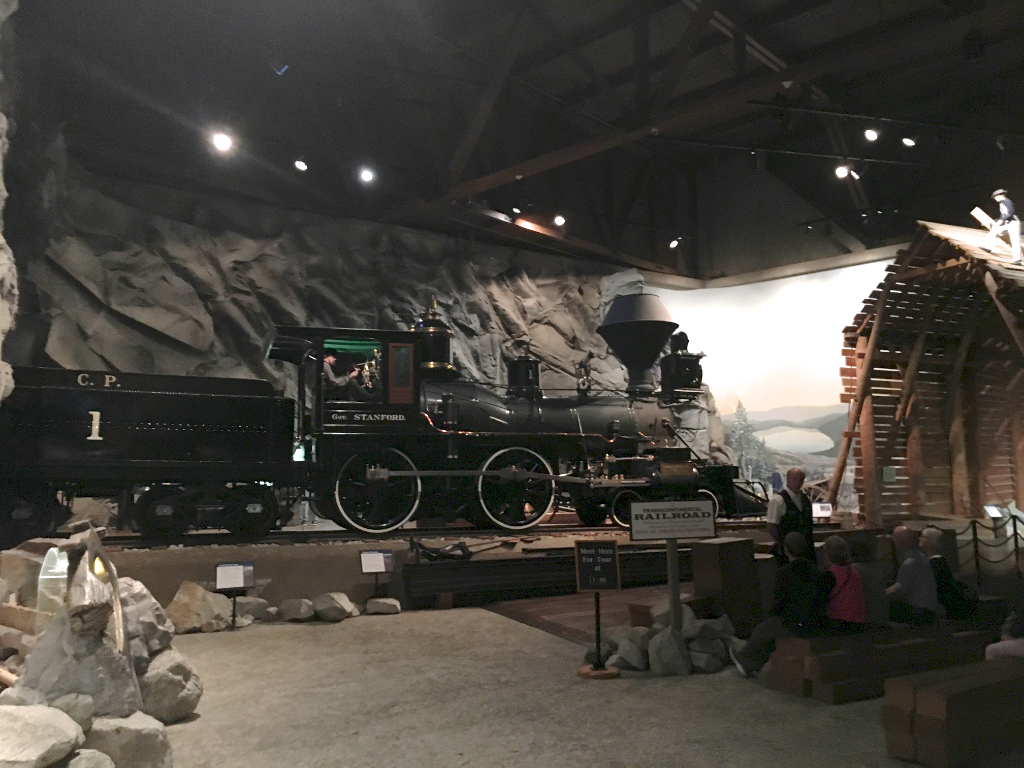 Above the Donner Summit. �Our tour guide explains the monumental engineering it took to get a railroad through the Sierra Nevada range.

Our final tour stop of the day was the California State Railroad Museum. This is definitely one to put on your itinerary. Nothing, absolutely nothing, united an adolescent America like the transcontinental railroad. The Union Pacific had it relatively easy pushing tracks to the west. The Central Pacific had to deal with the Sierras. It's an impressive collection of trains and the fascinating role they played in opening up the vast resources of California. 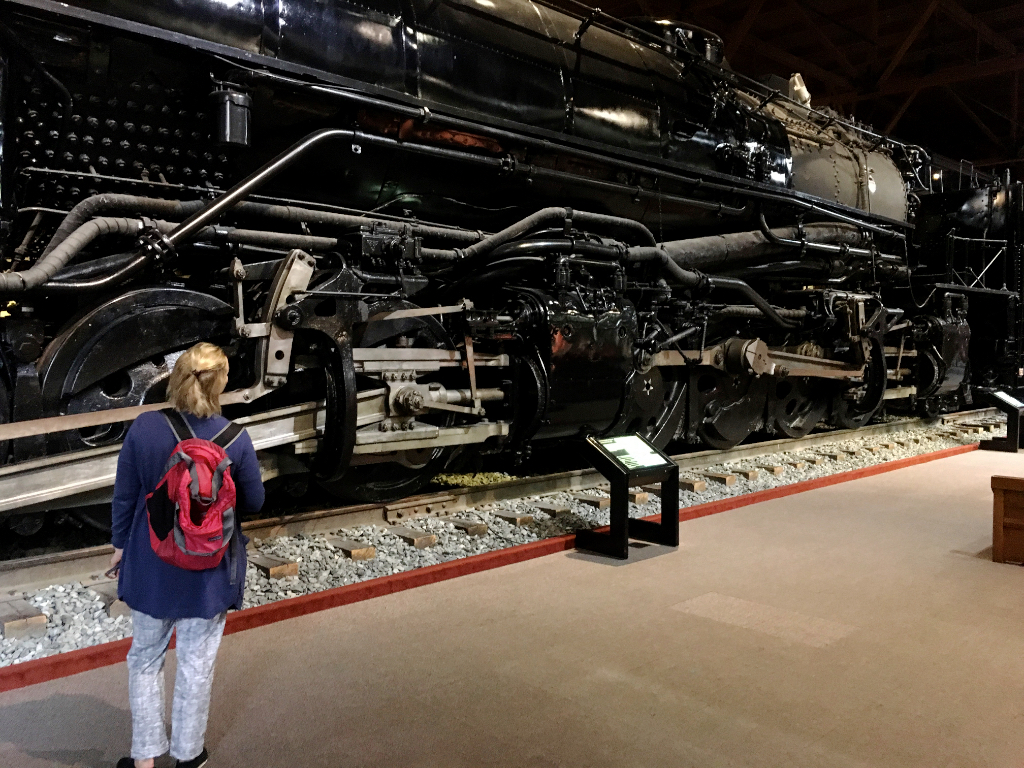 That's one HUGE steam engine. �One of the largest ever built before the advent of diesel-electric power. 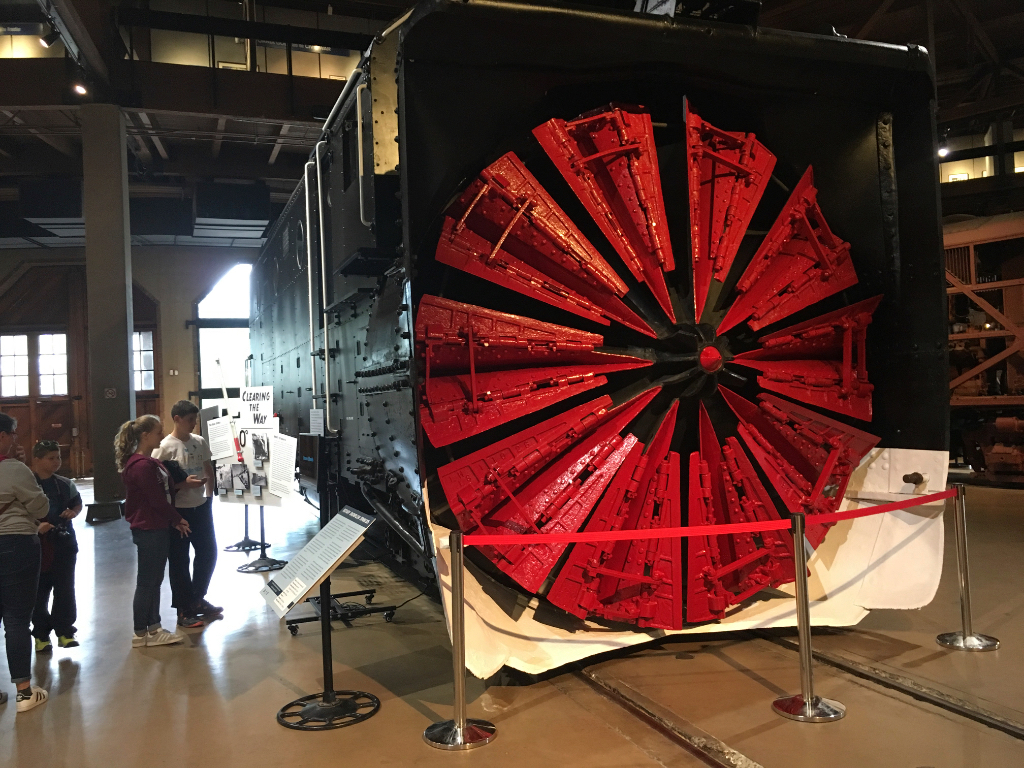 How to drill through Sierra snow. �The old spinning plow kicked up quite the snow plume. 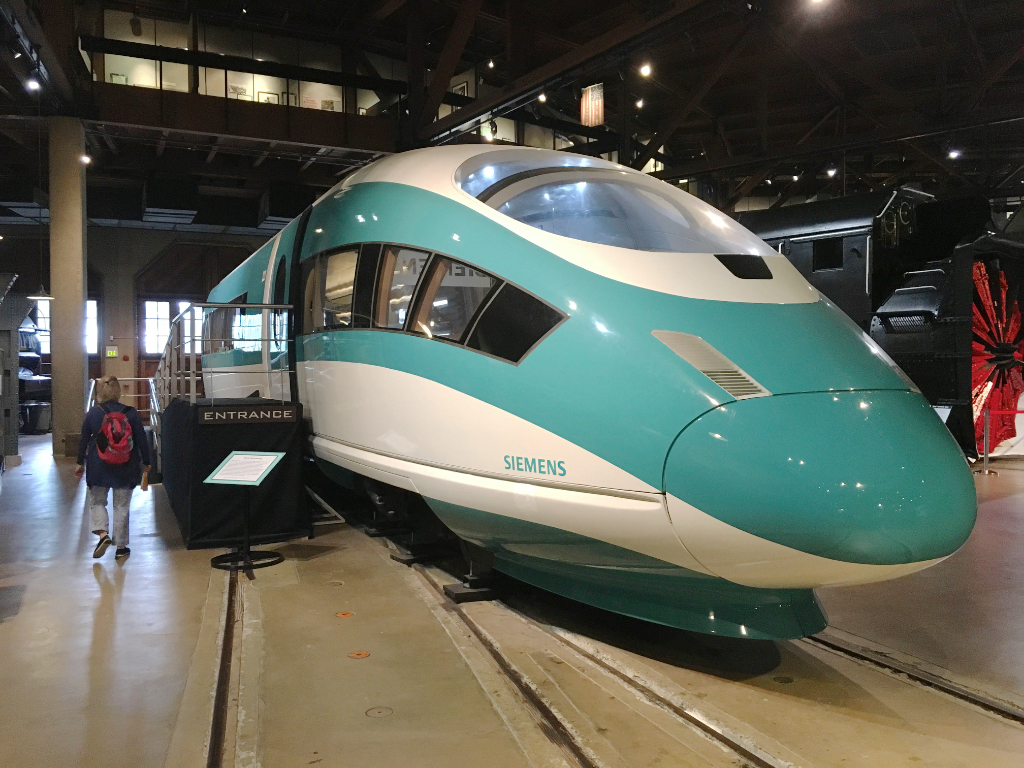 A vision of the future? �In a good PR move, the museum features a high-speed rail train. It'll cost billions and is very politically uncertain.

Today, we're well familiar with modern day tech titans with names like Hewlett, Packard, Jobs, and Zuckerberg. Their equivalents in early California history started as farmers and merchants and four of them (Huntington, Hopkins, Stanford, and Crocker) became railroad tycoons and much of that wealth is still evident in the museums and schools bearing their names.

This "local" history of California had an outsized impact on the larger American parade and as we cruised back home in the Navion across I-80 we kept looking to the right for the old railroad grades that cut through pines and rock and carved out a place in middle school history books.

California's political scientists, pundits, and many of its residents think the state should be two or three Californias. And from a visitor's standpoint, it already is. No matter where boundary lines may someday be drawn, that huge expanse of real estate from the Nevada desert to the Pacific coast is one endlessly fascinating place to visit.