Stepping Into the Unknown

To say that Peter and I like climbing mountains would be quite an understatement. For the past twenty years we have bagged more peaks than I can remember. Sometimes a stellar rock or ice climb to the summit was the allure, other times we sought out remoteness and solitude, but often it was simply a curiosity to see the world from a different vantage point that was the inspiration to drag ourselves, often clad in heavy backpacks loaded with gear, up endless rugged terrain until we reached the top. When our duo became a trio, we couldn't wait to introduce Abby to the Colorado Fourteeners (the 54 mountains in Colorado that stretch up over 14,000 feet in elevation). We had visions of her being the youngest person to climb all 54, but her first trip up Mount Bierstadt left Abby with other plans - hiking four miles uphill while battling an altitude headache at age seven was not on her list of things worth repeating. So we headed to the valleys instead and focused our attention on whitewater kayaking (which she LOVED). Our peak-bagger proclivity reared it's ugly head once again this winter the moment we looked across the barren desert of West Texas and spotted Guadalupe Mountains National Park - a majestic limestone monolith soaring over three thousand feet above the surrounding desert floor. As if drawn in by an invisible tractor beam, Winnie the View practically drove herself straight into the park. And once we realized that Guadalupe Peak was the highest point in Texas, even Abby conceded that we had to stand on the top of the Texas sized summit. Although Abby is a self-proclaimed bottom dweller who prefers to spend her time in the rivers below, but the majesty of Guadalupe Peak was enough to entice her out of retirement and tackle the Texas sized summit.

We set out early for the eight and a half mile trek, armed with water, food and rain gear intent on avoiding any afternoon storms and made quick work of the switchbacks up the arid, cactus infused landscape. Although it was January, the weather was warm and we quickly stripped down to t-shirts and basked in the morning sunlight. About a mile and a half up the trail we rounded a bend onto a north facing slope and within a few steps felt as if we had stepped onto another planet. The landscape morphed almost instantaneously from spiny succulents to towering fir and pine trees and the rocky, dusty trail was suddenly draped in snow that the many footsteps before ours had trampled into an icy shield that left us skidding about like cartoon characters in a sea of banana peels. 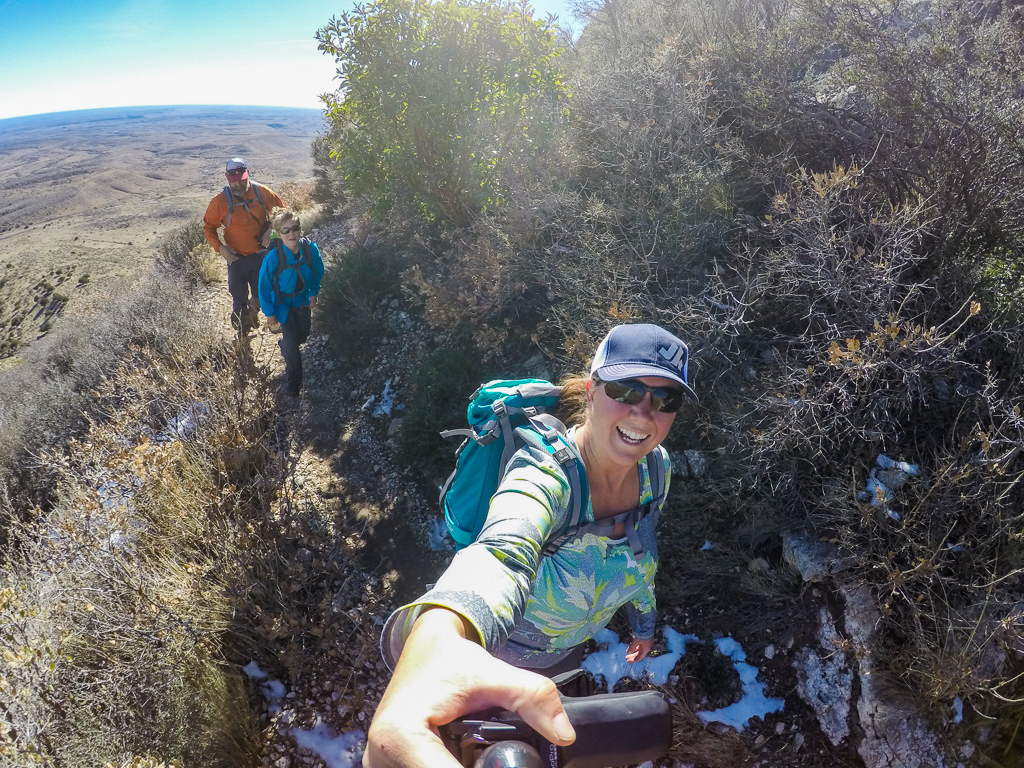 Kathy basks in the sun, completely unaware of the treacherous trail conditions just ahead. 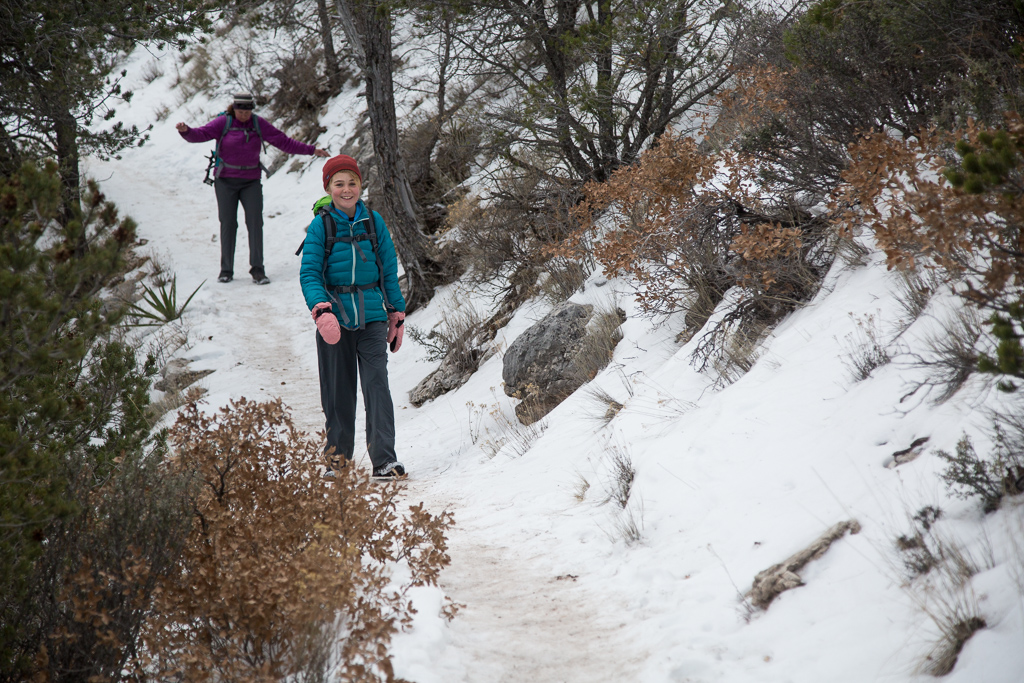 With one bend in the trail, the landscape morphed from spiny succulents to snow covered conifers.

However, the warmth of the mid-day sun had softened the ice on the trail enough that we could maintain some semblance of traction. While my feet marched rhythmically forward on autopilot (two steps forward one slip back, two steps forward...), my head sent out a persistent alarm that cooler afternoon temperatures would refreeze the trail, making our descent significantly more treacherous. However the allure of a new summit overrode the nagging warning in my brain and we pressed on. Midway up the trail, we crossed paths with a ranger, who warned of an icy bridge ahead spanning a deep chasm with dire consequences for any mis-step. His scolding tone coupled with the worsening trail conditions had me seriously considering an about face, but with only a mile to go, and the ever present optimism that the trail conditions would eventually improve, the allure of the summit overpowered my reservations. The park rangers scolding tone sent tremors of terror up my spine. What a relief to find a hand rail guarding us against the oblivion below. 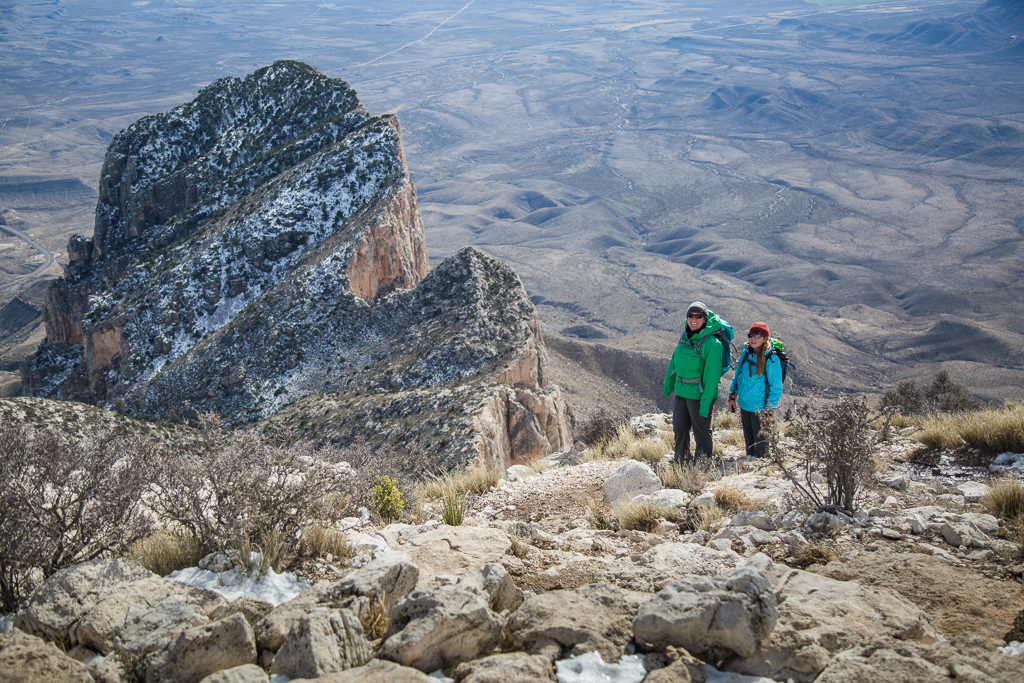 Once we shifted back to the southern face of the mountain, the snowy conditions eased and the views improved.

We made it across the perilous bridge without incident, and traversed across a steep hillside to the south facing aspect of the mountain, where we were drenched in the glorious warmth of the sun and on blissfully dry ground for the last quarter mile scramble to the summit. The last stretch was steep, scrambly, and buffeted with gale force winds, but OH, THE VIEW! I swear, you could almost see the ocean from the summit. The desert floor below just stretched on and on and on in every direction. It was breathtaking! Peter takes in the spectacular view from the summit. Kathy is overjoyed to have reached the top of Guadalupe Peak.

We wolfed down a quick lunch on the summit hunkered down beside a low slung rocky ledge in an effort to escape the wind, before heading back toward Winnie the View. With over four miles of icy trail to navigate on the return trip and plummeting temperatures, we made quick work of the south facing slope and before we knew it were back into the dark, dense coniferous forrest encrusted in snow. While Abby and Peter slid as effortlessly down the icy trail on their boots as if they would have on skis, my descent was neither confident nor graceful. Each of my hesitant steps either splayed me into the splits or sent me careening to the next tree branch where I clung for dear life until I could regroup and gather my courage to try again. To say that my progress down the mountain was excruciatingly slow would be grossly understated. To make matters worse, through my tears of terror I look up and see Abby and Peter rolling on the ground in laughter at my spastic and panicked attempts of retaining control as I careened down the ice covered trail. Eventually I realized that the snow on the outer edge of the trail (and often above a very steep precipice) was softer and if I stomped my boot, I could manage some semblance of traction as I teetered precariously close to the abyss below. Kathy claws her way down the never-ending icy descent.

Completely exhausted after hours of stomp and slide progress, we made it back to the sunbaked dry desert trail and I was able to pull myself together and enjoy the last mile and a half of our winter ascent of Guadalupe Peak. Had I known the trail was covered in ice, I would have thrown crampons in my backpack and would have trotted up and down the trail with confidence that each step would stay where it landed. Or if we had arrived a week later, the snow would have already melted leaving us with an easy, dry trail to the summit. But then, Guadalupe peak would have been filed away, deep in my memory bank as just another nondescript slog up a mountain. Instead, it is steeped in fiery emotion from the the joy of the summit, the (certainly over-exaggerated) terror of the descent, the indignation of being laughed at while watching Abby and Peter revel in the less than ideal conditions, and the love of spending time outside together as a family. 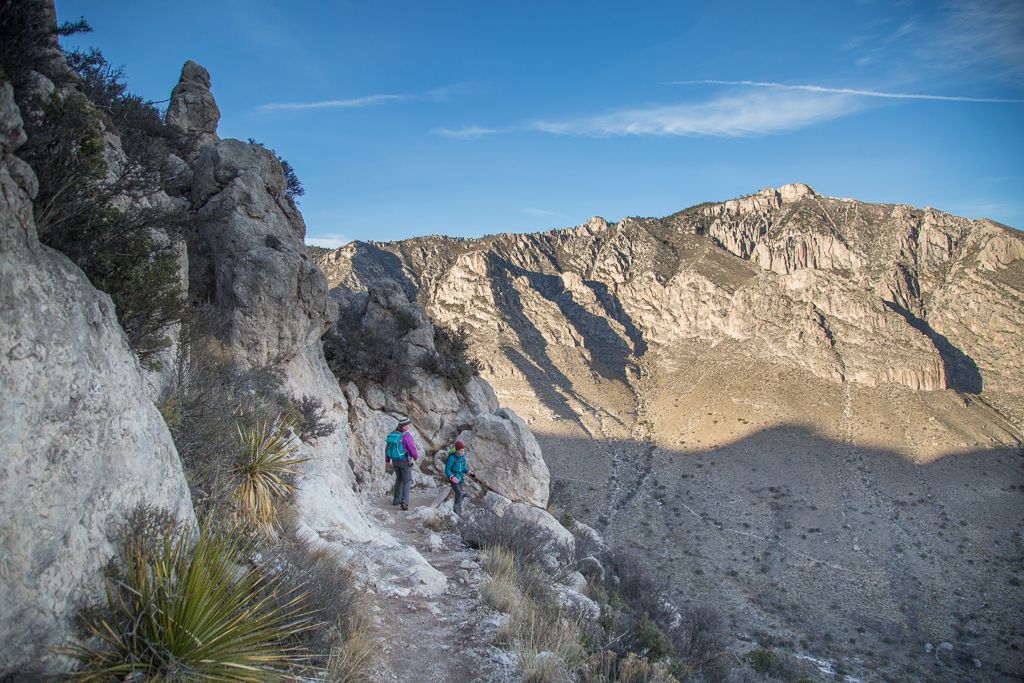 Once again on the south side of the mountain the ice disappeared, Kathy and Abby relax and take in the beautiful surroundings.

For me, the best adventures are as challenging mentally as they are physically. Pushing into the unknown is my very favorite uncomfortable place; an introspective arena where you see the battle rage between who you are and who you can become. Watching that battle of character teach and transform Abby is the best part of every adventure. I can see the lessons of the wild shine bright within her as she charges into the world with confidence, tenacity, flexibility, optimism and joy. This is our inspiration to forge ahead and continue to explore the wonderful and wild unknown. 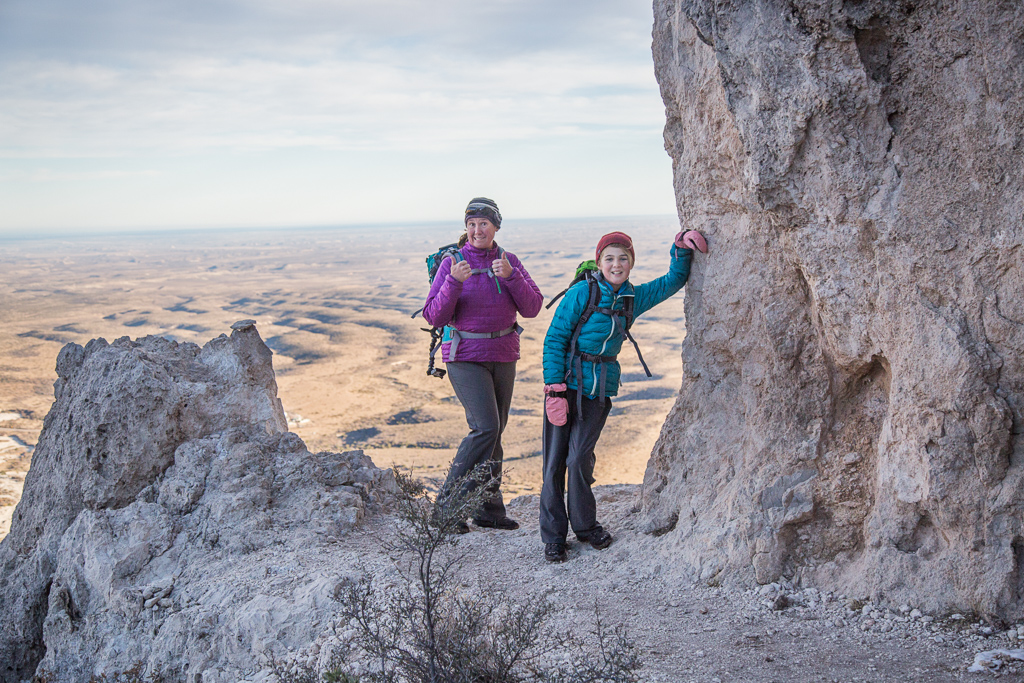 Another incredible adventure for the memory books.