Our first destination in Alaska was Valdez, and was purely exploratory in nature - in fact the only thing I actually knew about Valdez was that there was a massive oil spill there when I was in elementary school. Other than that, we had no idea what to expect. But backed with the iron-clad promise of a friend who guaranteed that it would be a favorite stop on our Alaskan tour, we headed south to see what adventures awaited us in Valdez. En route, we perused our 2016 edition of The Milepost, and found there was a great pullout for camping about 7 miles outside of town at the junction of Dayville Road. This particular junction turned out to be the gateway to the notorious Allison Point - famous for salmon fishing and grizzly bears. With that irresistible combination so close, we took a detour before settling in for the night to see what we might discover.

It was here that we caught our first glimpse of the ocean. It was overcast and rainy with glassy smooth water stretching across the bay. I rolled down the windows to take in the familiar salty scent of the sea, that always brings back fond memories of some of my earliest adventures with my dad. Instead of the nostalgic trip down memory lane that I was anticipating, I was jolted back to reality by the putrid stench of decaying flesh. I scanned the roadside to identify the culprit and noticed a writhing, churning disturbance in the tidal pool running alongside the road. The water was akin to river rapids, except there wasn't enough current to justify the turbulence that disrupted the otherwise calm pool of water. 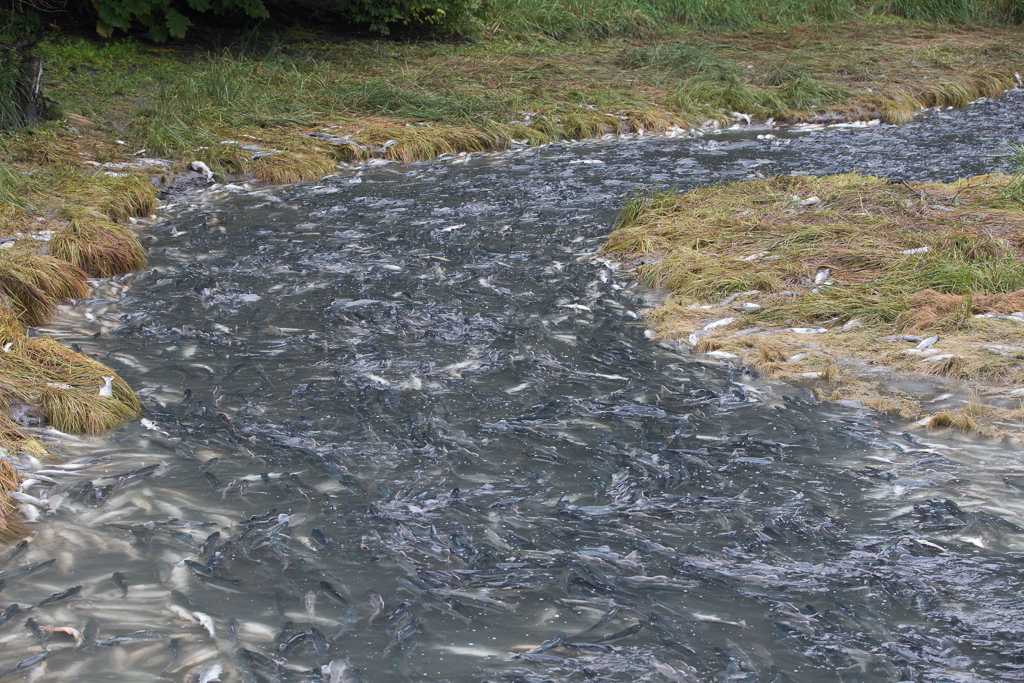 The source of the stench - a river of salmon stretching off into the distance as far as the eye can see.

It was then that I heard Peter whispered under his breath "SALMON!" It wasn't rapids at all that I was witnessing, rather millions of salmon clamoring their way upstream to the headwaters of their homeland. The shear magnitude of the biomass of salmon that ran for miles along the waterfront was incomprehensibly vast. As we continued further down the road, we discovered the source of all the commotion - a fish hatchery positioned at the outlet of a small creek that flowed into the bay. Adjacent to the hatchery was a weir (a metal sieve of sorts) that blocked the entrance into the freshwater creek and impeded the salmon's ability to return to their birthplace. Instead it funneled them into an artificial fish ladder leading into a series of concrete pools where they would eventually deposit their eggs as their final act on this earth. 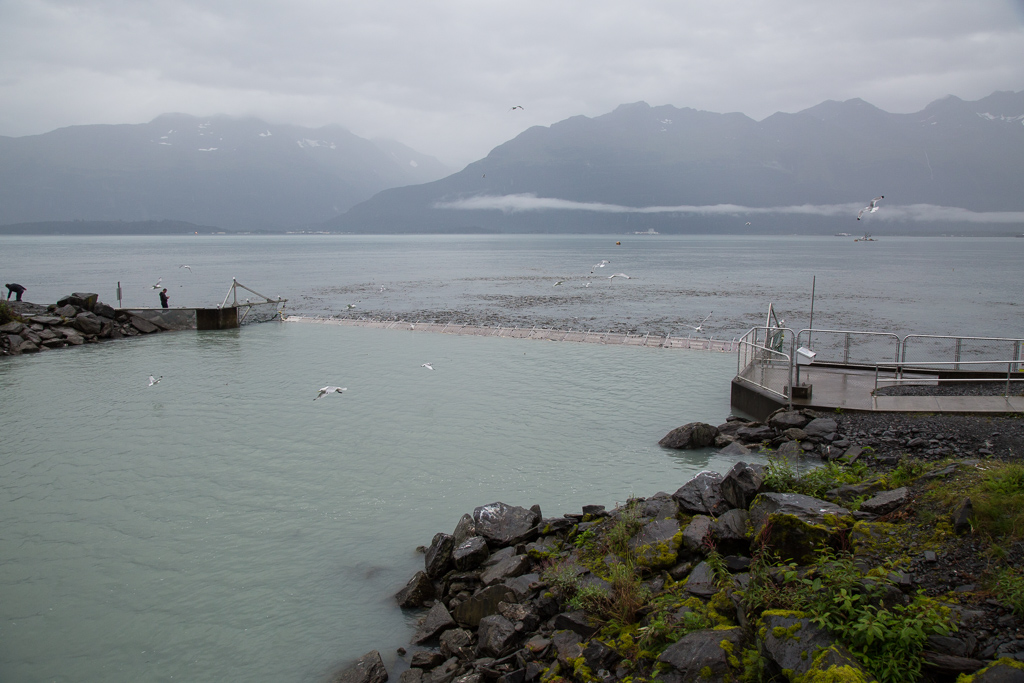 The weir that funneled the salmon into the adjacent fish ladder and up into the hatchery pools.

While we explored the happenings at the fish hatchery, we couldn't help but notice the increasing presence of fisherman that punctuated the rocky shoreline on either side of the weir. We watched in awe as they reeled in one hefty salmon after another. With the allure of an seemingly guaranteed fresh salmon feast, we headed into Valdez to purchase the required fishing license before testing our own prowess in the salty waters of the Prince William Sound. In no time we were back at Allison Point with a bagful of new tackle hopeful to land our first ever Alaskan salmon. Using the hot pink spoon recommended by the local tackle shop, I was pleasantly surprised when I experienced a firm tug on my line on my third cast. After a short but exciting fight I landed my first salmon - silver, with a hump on it's back reminiscent of a camel and a sinister and somewhat threatening jawline. It was what the locals identified as a "humpy" or pink salmon. An instant later, Abby was yelling "FISH-ON!!" from a short distance up the bank, and Peter followed suit moments later. After an exhilarating afternoon of catch and release fishing, we kept a beautiful pink that had not yet transitioned from it's ocean phase to it's spawning phase. A ocean phase pink salmon is beautiful and sleek with a bluish-green back and big oval shaped spots running along it's entire length. It was a perfect specimen for dinner. We filleted it and threw in on the grill drenched in lemon butter and dill, thrilled to be eating fresh Alaskan salmon right out of the water. Unfortunately, the pink salmon's flesh turned and unappetizing shade of grey when we cooked it. I'm not sure if it was the color or the actual taste of the fish, but our much anticipated meal wasn't exactly the culinary delight we were expecting. (NOTE: A few days later we learned that pink salmon are best canned and the locals turn their noses up at the thought of eating them - another Alaskan lesson learned the hard way.) 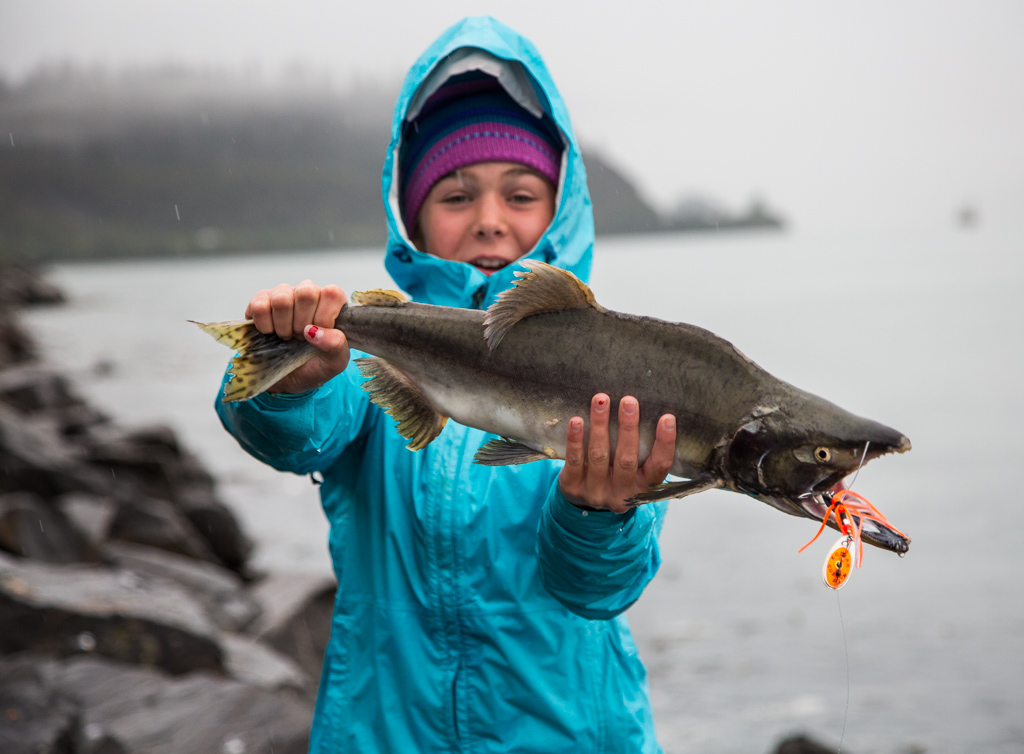 As we finished up the dishes that night, we witnessed an unlikely scenario unfold right outside our windows. A young couple pulled up next to our RV. The man hoped out first and quickly suited up in waders before readying his fly rod. The woman who followed was dressed as if she had just left the office - clad in a skirt, tights and a nice sweater. I couldn't help but giggle as I watched her don a bright orange rubber rain coat over her work clothes and swap out her high heels for rubber boots. The final accessory to her eclectic ensemble was the shotgun she hoisted over her shoulder before joining her beau at the back of their pickup. It was an entertaining turn of events leaving us wondering what they were up to. They took off down the trail leading to a small creek that babbled alongside our pullout and returned 20 minutes later with a beautiful king salmon that was at least 30" long - clearly they had done this before. 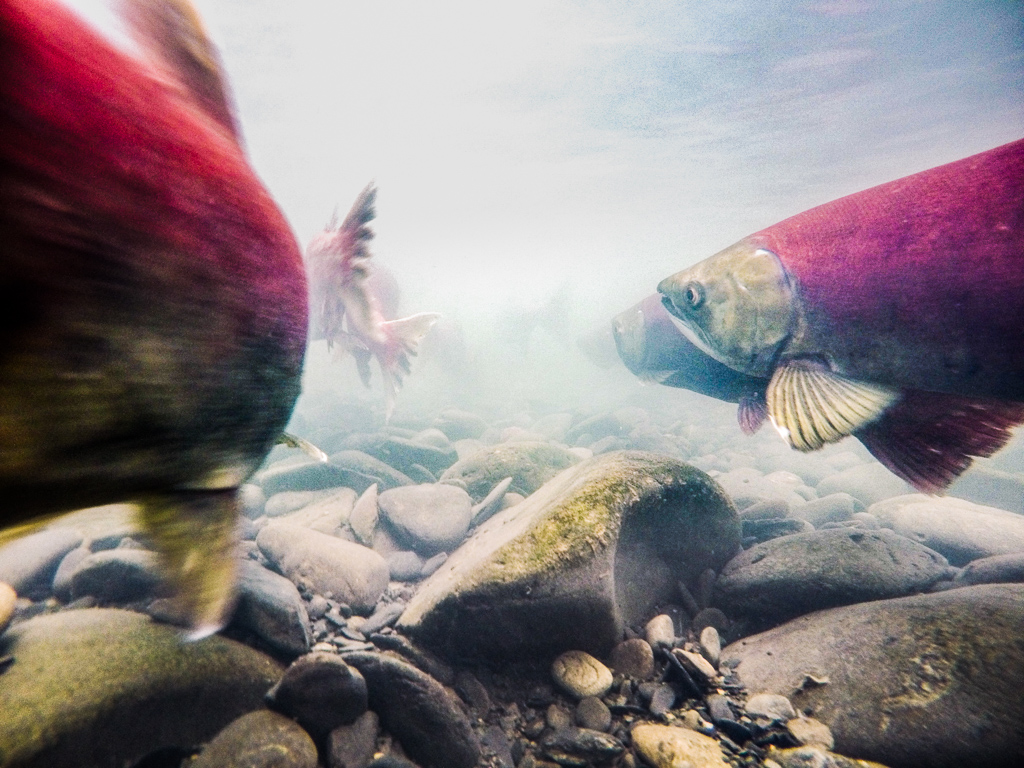 The crimson bodies of the sockeye salmon were unmistakable in milky blue glacial fed rivers.

Peter and I decided to follow suit and, emulating the locals, set out the next morning armed with fly-rods, firearms and a more selective salmon palate. As I crossed over the slightly raised berm that separated the pullout from the river, I followed a faint trail of sorts, lined with numerous shredded salmon remains, two large piles of scat and an abundance of very large bear tracks. I watched Peter tromp off downstream and standing by myself in the narrow creek, suddenly felt very alone and vulnerable. In an instant I understood the team fishing strategy of the couple from the night before - one to fish and one to stand guard against the bears. I inadvertently reached up to cling to the shoulder strap of my firearm as I scanned my surroundings - hyper aware of every crackle and rustle in the thick brush that lined the riverbed. After an extensive survey of the perimeter, I deemed myself relatively safe and settled into the familiar rhythm of fly fishing, with one notable exception. In lieu of silently stalking my sockeye prey, I opted for a less traditional and more raucous, bear-aware approach. Each time I moved to a new area of the river, I loudly serenaded the fish with a steady concerto of boisterous tunes that complimented the rhythm of my fly-rod. The idea was that a bear would hear my singing and run for the hills. Unfortunately the salmon seemed as unfazed by my fly as they were by my melodic approach. While I was fishing, hundreds of crimson bodied sockeyes made their way upstream, all around and through my legs, but after three hours of casting and wading through arctic water in the steady drizzle with nary a bite, I threw in the towel and headed back to the Winnie. An hour later, Peter returned cold and empty-handed as well, his only catch too far into it's spawning phase to be edible. At least the restaurant in Valdez had a salmon special on the menu. 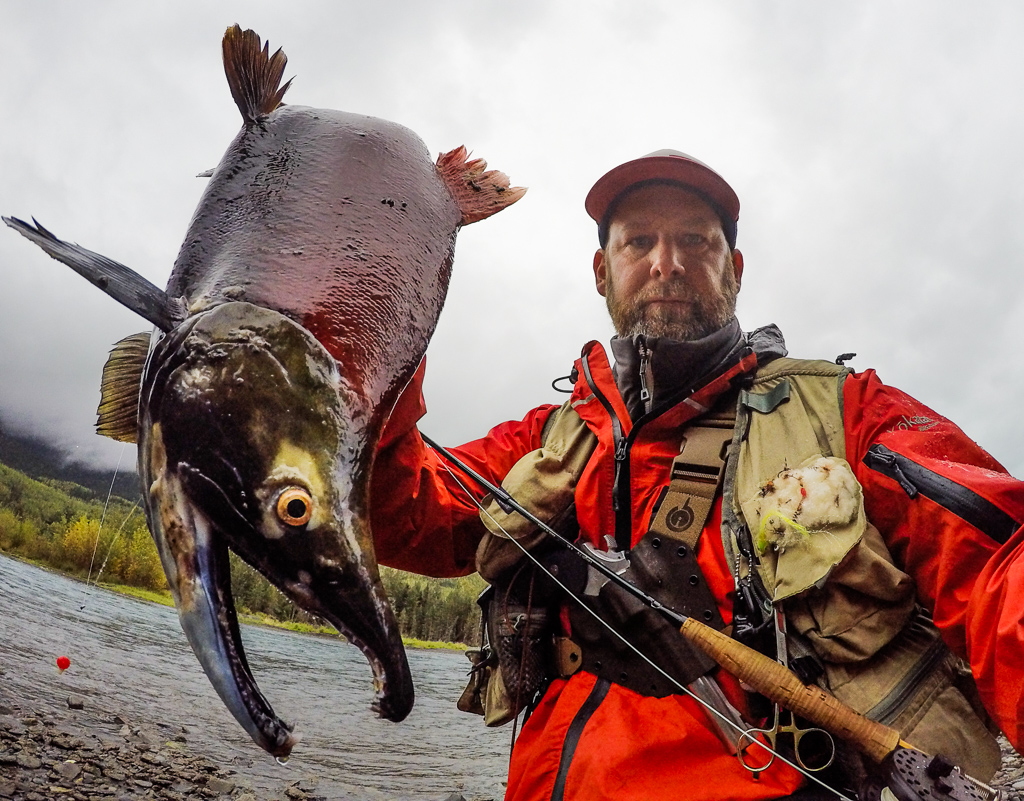 A discouraged Peter with a sockeye that was a bit too far into it's spawning phase.

Our first two rounds with the salmon were huge learning experiences, and for now, the sockeye have won. But as we head over to the Kenai Peninsula, we can't wait for another opportunity for a rematch. As we drive along the teal blue waters of the Kenai River, we are watching, searching for the illusive flash of red as the sockeye make their way upstream toward their native spawning grounds. We will return again with more knowledge and experience, ever hopeful that our next salmon feast will be one that we catch ourselves.