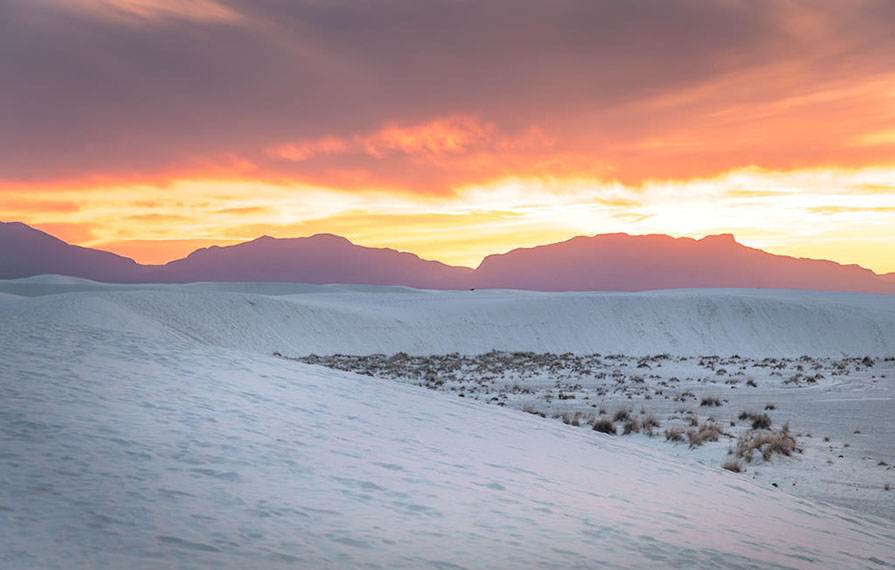 Who can really say what belongs on a bucket list?

Growing up near the glitz of Miami, we never fully understood the allure of RVs and national parks. RVing isn’t terribly popular in South Florida, and while we did take school trips to the Everglades, the idea of visiting other national parks just didn’t come up as often as say visiting Paris or New York City.

But, fast forward to today, and after RVing to 16 U.S. national parks and just over a quarter of Canada’s 48 national parks, we can now only nod in agreement when anyone shares that it’s their dream to tour the country by RV, stopping at as many national parks as possible.

Now we know that you can drive through the Martian landscape of Arches National Park, then sleep a few hours in the evening in your RV to recharge for a night hike under the Milky Way.

We know a day that dawns with us at Lake Louise, followed by napping with Takakkaw Falls out our Trend windows, and closes with us sitting in front of Moraine Lake in the evening is the most incredible kind of day.

Driving our Trend through Yellowstone, we learned a national park can be so vast you can go twice, not see Old Faithful, and still have to pick your jaw up off the road.

Among our most cherished stops is White Sands – and we dare say this surreal national park belongs on your RV bucket list.

For now, the national park designation may mean more visitors and a boost for the state of New Mexico. There’s some hope, with this success, that now Bandelier National Monument will bring New Mexico’s national park total to three (Carlsbad Caverns is the other national park –which we also recommend visiting) – the state already contains an impressive 15 National Park System sites!

Spring and fall bring comfortable temps and mild weather to White Sands. These are, without a doubt, the best time of year to visit.

We know, we know, what about the summer? If that’s the only time of year you can get away to New Mexico, White Sands will still be open. But, be sure to keep a few safety precautions in mind.

Summer at White Sands runs from May to August. These months see daytime temps climb to 100 F and lows hover at 65 F.

If this is your only available window, pack way more water and food than you think you need.

Remember, White Sands warns all visitors NOT to start any hike if the temperature is 85 F or higher. So, save any hiking for very early morning or late in the day. And while always true, be especially aware that the endless sea of powdery dunes, while beautiful, are deceivingly disorienting.

May and June are best out of the summer months because “monsoon season” (July-September) overlaps with the end of summer. Monsoon season brings lightning and thunderstorms to White Sands. Avoid going out into the park when storms are approaching by checking the weather radar.

No matter what month you visit, do not hike in the low visibility conditions of a windstorm.

Meanwhile, winter runs from November to February. Temps dip down below freezing at night and in the early morning. Daytime temps can range from a nice 60 F to a downright chilly 30 F.

We’ve visited White Sands several times – always in March. Mid-March specifically. A March visit means going through an array of layers throughout the day as the temperatures quickly shift. But the days have been mild and long enough to enjoy full visits with sunset in the seven o’clock hour.

Where to Stay in Your RV When Visiting White Sands

The only camping available at White Sands is backcountry tent camping. So, as an RVer, you’ll need to plan to stay outside the park. 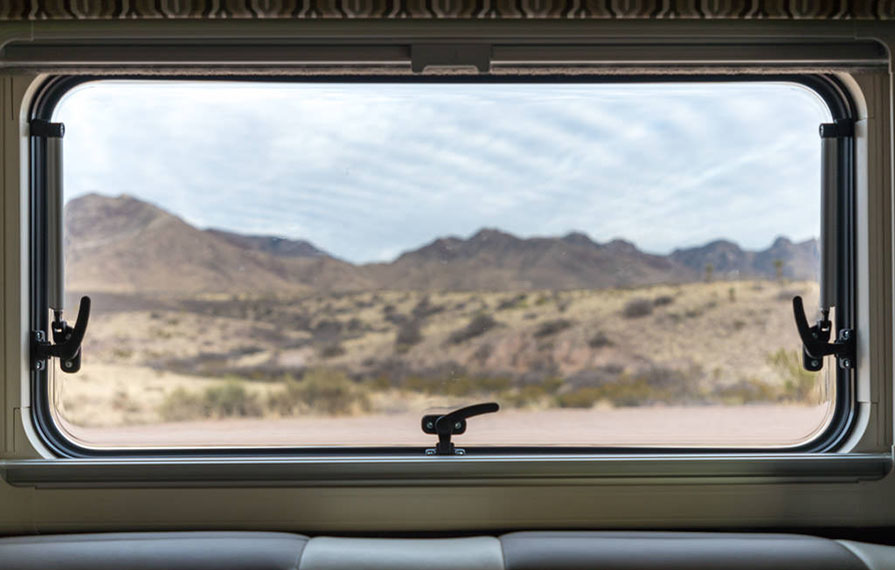 Looking at the Organ Mountains out of the window of our Trend.

Two nearby options are Las Cruces or the town of Alamogordo.

A stay at Alamogordo places you just 13 miles away from White Sands. You can book a stay at any of a number of private campgrounds. Or, we recommend a stay at Oliver Lee Memorial State Park. It’s technically just outside Alamogordo, but it’s pet-friendly and reservations are available online. They also have first-come-first-served sites. Water and electric sites are available with 30-amp or 50-amp hookups. Some sites available are developed, but have no hookups.

Our absolute favorite spot is a boondocking spot outside of Las Cruces. Las Cruces will put you about 30 miles from White Sands. But, wild camping on the Sierra Vista Trail nestles your RV between the city and the Organ Mountains-Desert Peaks National Monument. There’s nothing like morning coffee with mountain views from your RV window. Spots here are quite accessible for RVs, but only suitable for any RV type shorter than 30 feet. You have to be able to make a U-turn to head out. So, while accessible, it can be tight. 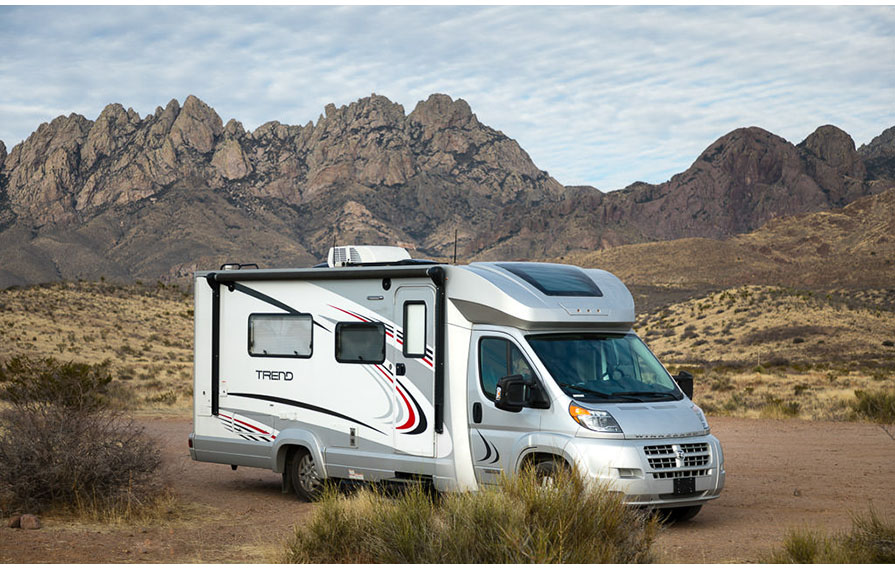 Why White Sands is So Special

White Sands is the world’s largest gypsum dune field! Even though temps can reach triple digits, the gleaming gypsum sand dunes remain cool to the touch year-round, at all times of the day.

If you’re lucky enough to actually spot any of the wildlife at White Sands, you might also notice that the wildlife here is a lighter color than their exact counterparts just outside the national park.

Not only do these natural characteristics make White Sands special, but it’s also a special place you can share with your pet. Furry companions are welcome at White Sands, in many parts of the park.

Most amazingly, the beauty of White Sands is extremely attainable. Some beautiful sights make you work! The payoff may lie at the end of a miles-long hike, or after aggressive elevation gains at other parks (Angel’s Landing, Delicate Arch, and Half Dome all come to mind!). But, at White Sands, you’re just steps from the dunes when you park along the park’s pullouts. And, eye-popping sunsets can be seen by all from nearly anywhere in the park.

What You Must Do While at White Sands

The most spectacular thing you’ll do at White Sands, in our opinion, is watch a blazing sunset surround you – yes, it almost completely surrounds you.

We returned a few days in a row just to experience the sunset again (and again). The sky will slowly light afire. Then, flecks of gold streaking across the sky like embers will draw your eyes to the west. But, behind you, the mountains to the east begin to glow as the sky to the north swirls with cotton candy blues and pinks. When twilight finally cools the sky, the San Andreas Mountains in the west remain outlined in highlighter pink as they lay silent and mysterious over the powdery bluish-white dunes. Blue hour reminds you to get back to your RV as the park is closing. 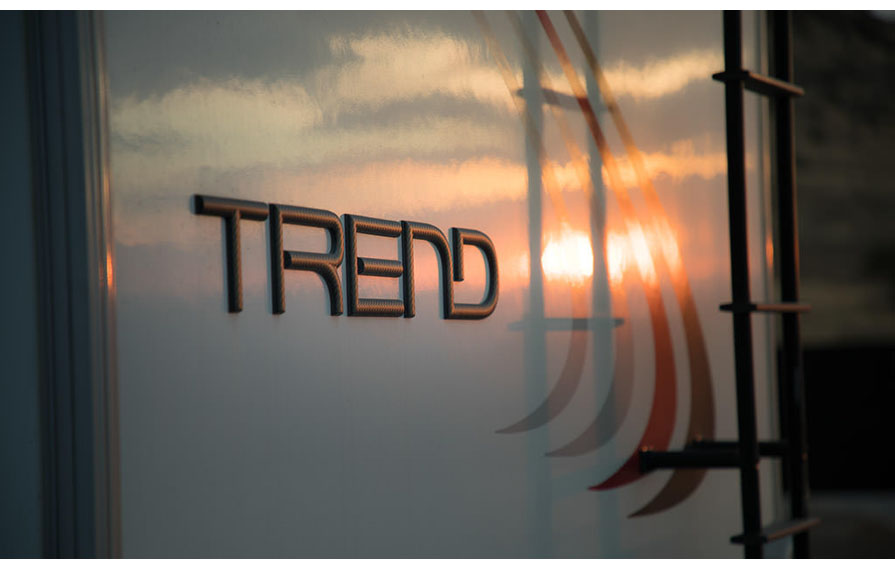 White Sands has a very large number of covered picnic shelters. Many of them even have their own parking spot for you to park right next to your table.

While longer and bigger rigs won’t fit (and there is no space for rigs to park at the visitor’s center either), you can easily drive up to a picnic spot with a towable like the Winnebago Hike, any Winnebago Class B, and Winnebago Class Cs like the View. We had no issue parking our Trend (24 ft) and a friend’s Jeep at our picnic spot. Smaller Class As, like the Adventurer 27N, would also fit.

An iconic thing to do at White Sands is sledding down the dunes. They make it very easy to rent sleds at the visitor’s center. You can rent a sled, go out, catch the sunset, and return the sled the next morning. (You would miss the sunset if you returned the sled before closing).

The longest trail in White Sands, Alkali Flat Trail, is only five miles round trip. For views of untouched rolling dunes, take a walk on Alkali Flat Trail. If you get a chance, catch one of the amazing sunsets from the trail as well. We just walked one mile into the trail to watch the sunset. That gave us enough time to head back before closing/dark.

There’s plenty of parking pull-outs along scenic, eight-mile Dunes Drive. This is the best way to take a tour of White Sands. We had no problem driving the road and parking at the pull outs in our Trend. You’re just steps from the dunes at all times, making it easy to hop out and explore. The road does have sections that are rather corrugated though.

After traveling more than 50,000 miles and counting in our trusty Trend we can say while beauty can be found anywhere, there’s no denying national parks hold some of the most breathtaking sights our country has to offer. Beautiful White Sands is a great national park to start taking in some of this beauty.

What national park will you RV to first?