Most folks across the country experience the brutal, inescapable cold and snow during the winter months and while we're not full-time snowbirds, we have found that a generous break from late winter cold allows us an earlier head start on spring.

This year we tried something different. We hitched our Navion to a southbound wagon train and signed up for a 10-day rally through Winnebago Outdoor Adventures. Frankly, this was completely unlike us. First of all, our travel style is generally much more independent than joining organized tours. Second, we generally stay in one place for just a few days and then move on. Third, we had our concerns about traveling into Mexico. 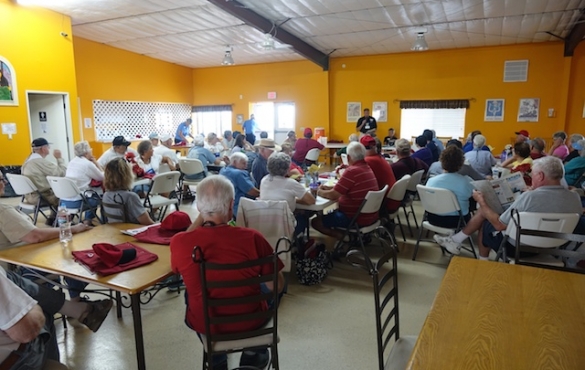 An almost universal characteristic of RVers is that they're outgoing, love to meet other people and, with barely a nudge, happy to share their life stories, best camping areas, or perfect floorplan wisdom. It's really unlike any other kind of travel culture we've encountered. As we sat in our first evening orientation in Gila Bend, Arizona, with the exception of two Colorado WIT Club members that we knew, I saw the faces of happy strangers. By day three, at least half of them were now happy friends. 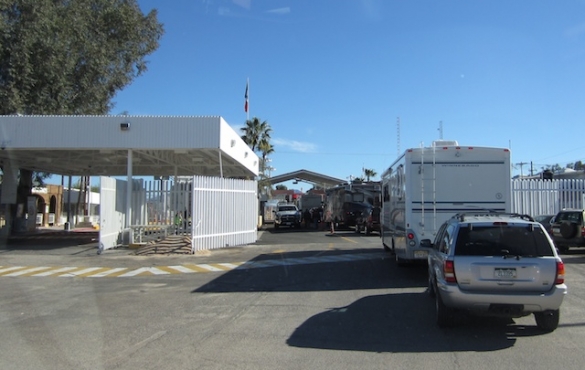 It took the better part of a day to caravan into Mexico, clear customs, and pull into our site at the Playa Bonita RV Park. The trip would have been faster but there were a few unplanned "speed bumps" including an actual speed bump that launched a small golf cart off the back of one rig's hitch and onto the road right after crossing into Mexico. Another rig developed a fuel line problem that was causing a loss of power. By traveling as a group, having two couples as event hosts, and all being connected with CB radios, what could have turned into bigger problems was nothing more than a short delay and everyone arrived as planned. 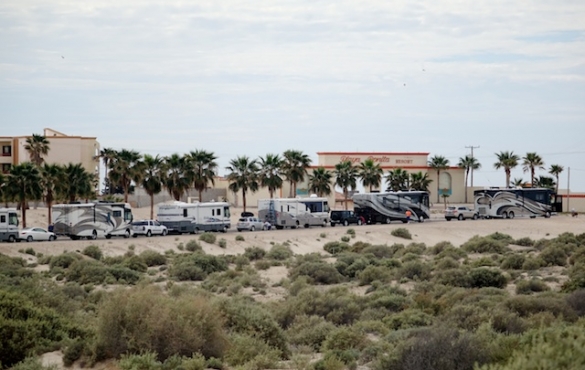 The WOA planned tour has been expertly designed and perfected to provide a perfect mix of safety, comfort, and as little or as much social interaction as you want. Neither my wife nor I were sure we could chill out for ten days, but to our surprise we did. I think what contributed to that was striking up quick friendships at happy hour, carpooling to in-town adventures, and simply hanging out in other coaches. Folks would come by our rig to chat, borrow a spare iPad charger, and plan joint dinners. This is a very, very different style of travel and it's one that I think that non-RV travelers don't understand, let alone appreciate. It mixes the best of being in a close-knit community neighborhood with more exotic adventures that come with a seaside resort. 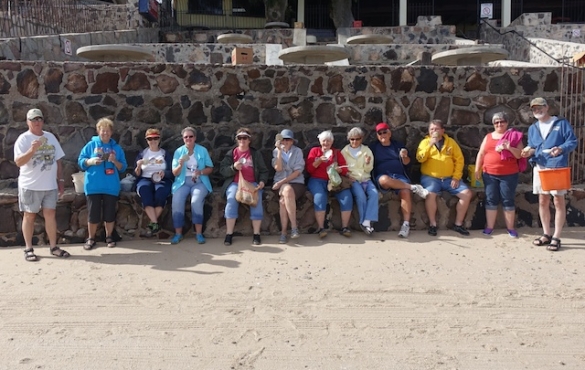 As much as it was fun to explore the small town of Puerto Penasco, it was great to learn about our fellow travelers. The air traffic controller, police chief, school teachers, federal prosecutor, chiropractor, airline pilot, B-52 navigator, research director, welder, assistant town manager, limo driver, naval engineer, public health nurse, plus a few entrepreneurs. Some traveled in top-of-the-line motor coaches, others, like us, in smaller rigs, and a few towed trailers. Age and income didn't matter, but attitude did. And that friendly, here to share -- here to care attitude is what surprised us most. From wondering before the trip if we'd be able to head home early if we got bored, to coming to think that our time was ending all too soon, our expectation and outlook changed dramatically. Why? 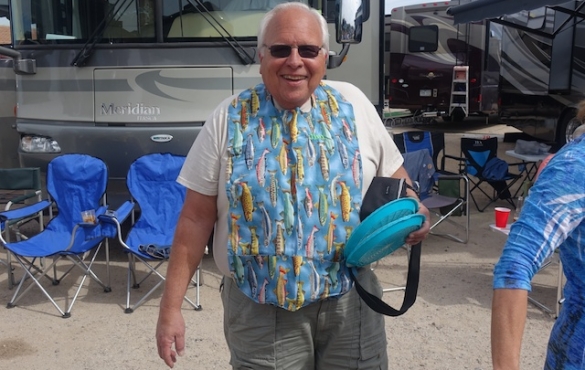 It comes back to the welcoming vibe of being part of a travel community. Long after the details of the shops and restaurants fade, the vivid memories of the people we met will remain bright. The spirit of adventure may attract you the first time, but it's the friendships that will bring you back again. First-timers have little stars on their name badges and, in some small way, that signals extra attention from the seasoned rally travelers.

Puerto Penasco is located near the top of the Gulf of Baja (also known as the Sea of Cortez). The story goes that the beaches are the sand that the Colorado River scoured out of the Grand Canyon millions of years ago. Geographically, this is an area where the desert meets the sea and it's a very arid and pleasantly low-humidity climate. In late February the days are in the mid-70's and the evenings cool off into the low 60's. 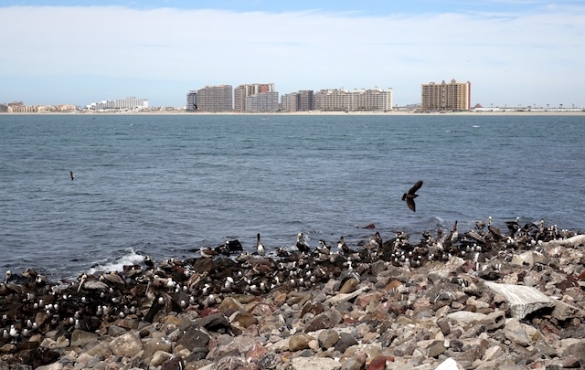 The town is also called Rocky Point which refers to the outcropping of land adjacent to the small fishing port. What the town has going for it is that it's only 60 miles from the US Border and an easy 1/2 day drive from either Phoenix or Tucson. It's often referred to as "Arizona's beach." 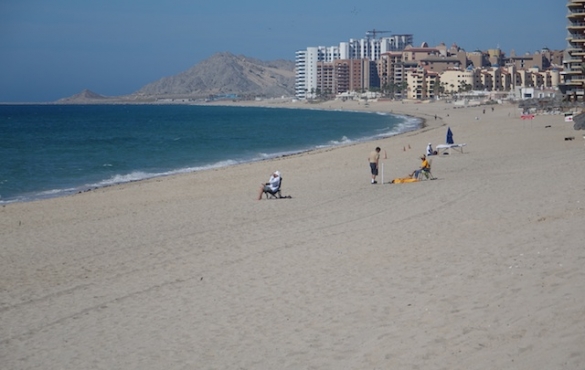 That close proximity to the US has driven development for condos and hotels to the north of the town and along the beach. Currently, civil construction is underway to build a large breakwater and create a port for cruise ships in the next couple of years. 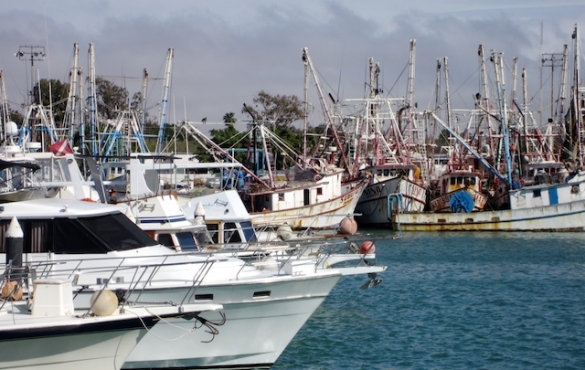 Though originally a fishing village, it's clear that tourism is the main economic driver. And locals are used to and genuinely welcome US visitors and, conveniently enough, are happy to take dollars, though your change may come back in pesos. The Malecon is a major street that loops through the heart of the town. Not surprisingly there are plenty of restaurants, seafood vendors and gift shops concentrated in this area. And while you wouldn't describe it as old-world charm, there's a fun bazaar atmosphere to it. 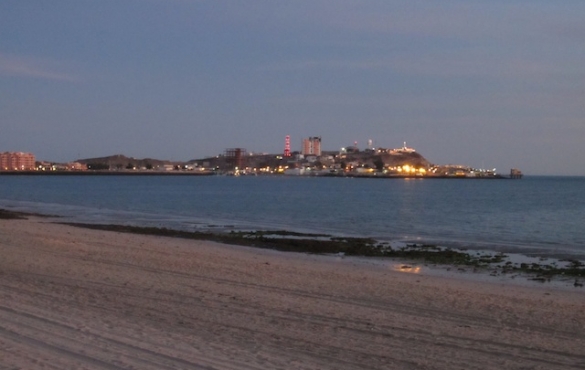 There are far more culturally rich and historic towns in Mexico, but on the positive side of the ledger, Puerto Penasco offers visitors easy access from the US, temperate winter weather, and a long and pleasant beach all within a safe and tourist-friendly small community. If you have a satellite TV system you'll get all the US channels (hint: call your provider to change your point of service to an address in Gila Bend, Phoenix or Tucson). Your cell phone will work but, make sure your buy international minutes and turn off your data service. Fortunately, within the park and the restaurant, free and decent wi-fi service is available (just don't plan on streaming your favorite Netflix series).

The Puerto Penasco trip lasted for ten days. While Winnebago Outdoor Adventures writes up a very good trip description, there's a lot of "between the lines" effort that I observed.

These trips aren't simply thrown together. The RV park, restaurant, and activities have all been carefully evaluated. Throughout the trip, I paid close attention to our trip hosts, Liz and Doug and Sue and Jerry. While unfailingly genial, they ran a tight ship and that was deeply appreciated starting with our first night's orientation in Gila Bend, Arizona. They walked us through the entire process of crossing the border in precise detail. They answered questions about road rules, map directions (just in case somebody got separated from the herd), and arrival protocol (unclipping your tow vehicle, being escorted to your site). That simple, yet critically important act was a big confidence builder for all the first-timers. 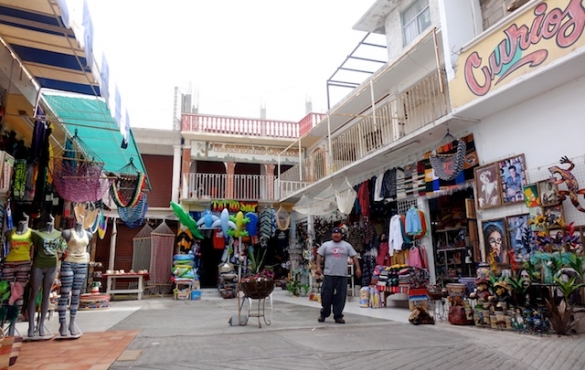 On our second day, two waves of town tours were arranged. Jerry and Sue led off in their car, followed by two other cars (we shared a ride with another couple). Everyone had little FRS walkie-talkies and we followed Jerry and Sue as they drove through Puerto Penasco using the walkie-talkies to point out shops, restaurants, the grocery store, medical clinic, etc. Even though we have a GPS in our car, the driving tour was enormously helpful when it was our turn to solo. It was part tour part cultural orientation. They pointed out some of the highly variable stop signs to help us avoid having an unplanned meeting with the local policia. They showed us which stores had good pricing and might even offer Winnebago travelers a discount.

The impressive depth of their knowledge is best illustrated by one example: the hot dog stand. We were on a side street, just a few blocks off the main drag, where Jerry pointed out a small hot dog cart with a couple of tables under a small awning. It was on his "don't miss" list. If we had seen this cart on its own we never, ever would have considered stopping. But, armed with insider knowledge, we went back a couple of days later and, for a buck-fifty, had a really great (no kidding) hot dog. I especially liked the guacamole cream sauce garnish. 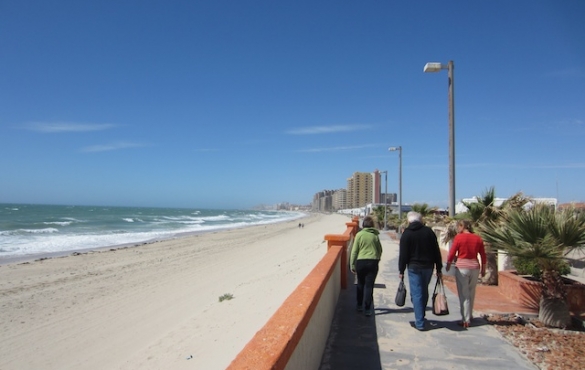 Adjacent to the RV park was the Playa Bonita Resort which also included a full-service restaurant. It was here that every day at 4 PM happy hour started along with very reasonably priced drinks and good chips and salsa. The tour package included four dinners and one-weekend breakfast. On one evening we were asked to choose a playing card and, based on our selection ate at that card's table. It was a simple (and successful) technique that mixed us up to meet different couples. And despite my apprehensions, none of the group mixers ever felt forced or contrived. 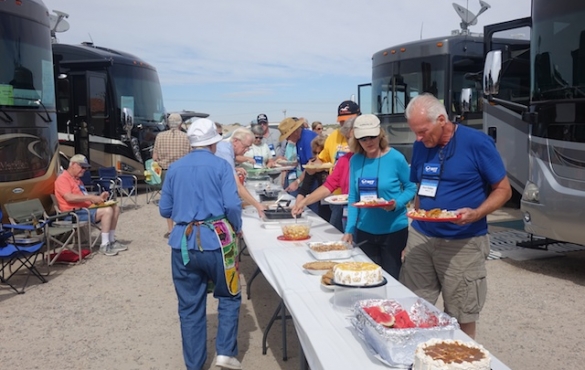 Our four hosts organized a shrimp boil where they provided the great (and large) local shrimp and the rest of us brought salads or deserts. A long line of portable camping tables was extended with a white plastic table cloth (fully anticipated by our hosts) which was stretched over 25 feet and bedecked with a great selection of homemade and, in a few cases, home (in-rig) baked items. 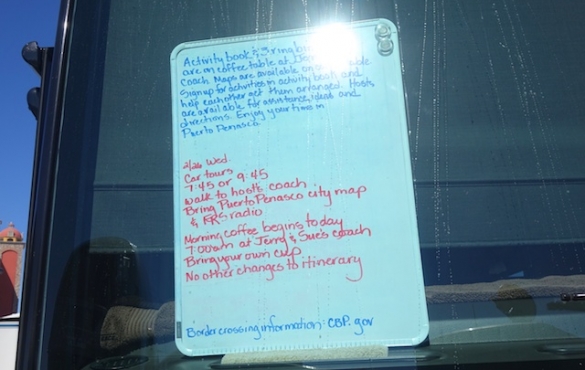 Outside of our host's Liz and Doug's coach were two three-ringed binders. One held sign-up/meet-up sheets for people interested in deep sea fishing, golf, sand dollar hunting and other similar activities. The other binder was a collection of menus, brochures, and information on Puerto Penasco. In the front window of their coach, there was a white board with messages and updates. A big commercial coffee urn was set up each morning to dispense a cup of joe for the early birds. 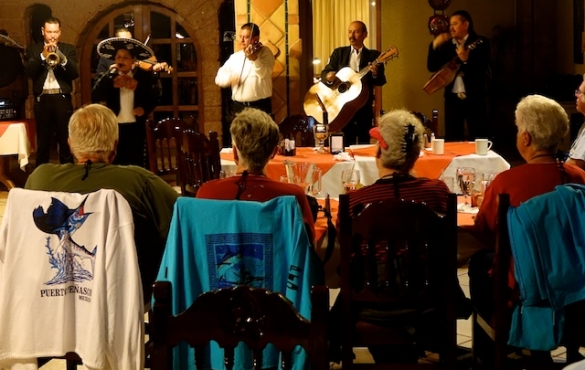 From our first night's orientation to waving goodbye to us as we crossed back into the US, Liz, Doug, Sue and Jerry worked very hard, though as in the case of any kind of pro, it never really looked like it. Always curious, I had several conversations with all of them about how they came to be trip hosts, what kind of pre-planning is required, and what were some of their challenges. Their answers all pointed back to how important pre-trip planning is. On the reverse side, I asked some of our fellow travelers if they'd gone on rallies or tours managed by other companies how Winnebago Outdoor Adventures compared. Their answers were consistent: the WOA rallies and tours are a significant cut above the rest. I'd sum the WOA success formula up as follows: people + planning = a great travel experience.