Return to the White River

After a fun day with the Fisheads of the San Juan, Cory was dropping me back at the Travato in Cottonwood Campground, and it was time for us to be on our way. The journey was entering 'make time mode', meaning time to cover some ground. Driving all evening brought us to a night in Eastern New Mexico on I-40. A long day across TX and OK, and we were once again pulling into a familiar campground -- Bull Shoals at White River State Park in Arkansas. 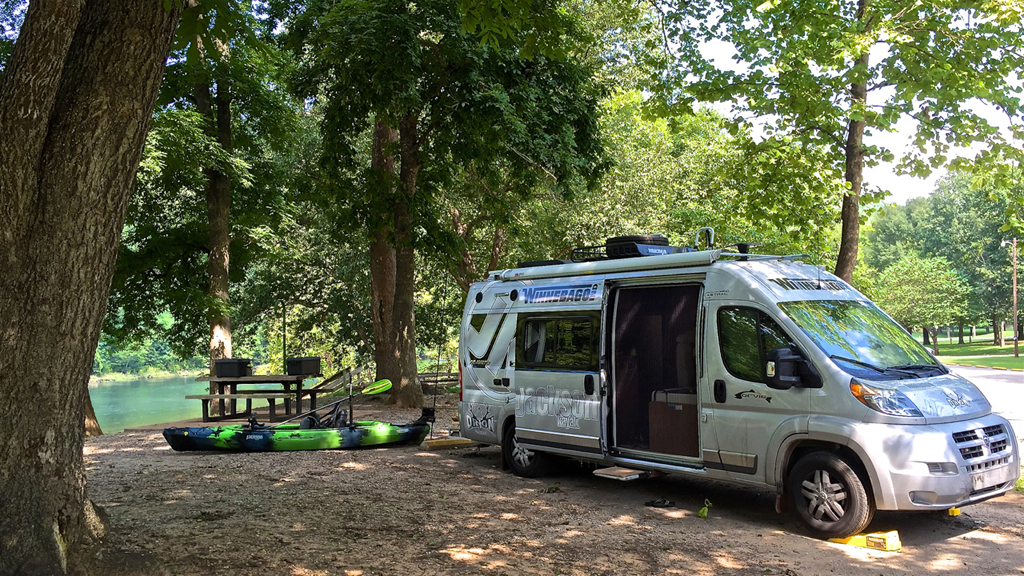 If you've followed our Winnebago Life adventures, you may recall a rookie weekend here was our very First Travato trip.

We're a little more seasoned now and used to the Travato, so my mind was on one thing, kayak fishing for big brown trout. This is really an ideal location for trout kayak fishing. Even though it's mid-August and hot, this is tailwater fishery, meaning constant cold water coming out from the dam upstream, creating ideal trout habitat year-round. You can get campsites right on the riverbank, so getting your own kayak to and from the river is easy. If you don't have a kayak, you can rent them from the trout dock. 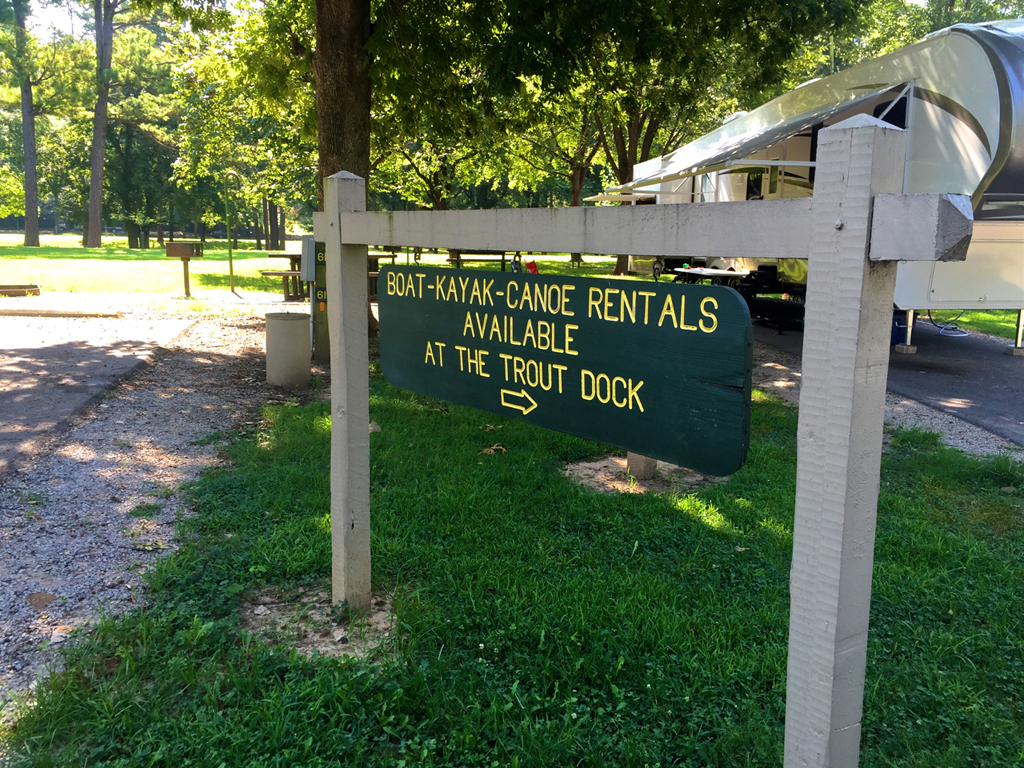 Once parked at your site, you don't have to drive anywhere to go kayak fishing, but can if you want to. There's section you float and run shuttle, but after just one trip there, I already preferred just putting it right at the campsite (or using a kayak cart to get to the trout dock beach), paddling upstream all the way to the dam, and floating and fishing back to the campsite. That's a 'trophy' catch and release only section, and while there are boats motoring from downstream and doing that same stretch, it's not a traffic heavy as sections downstream that let you keep fish. 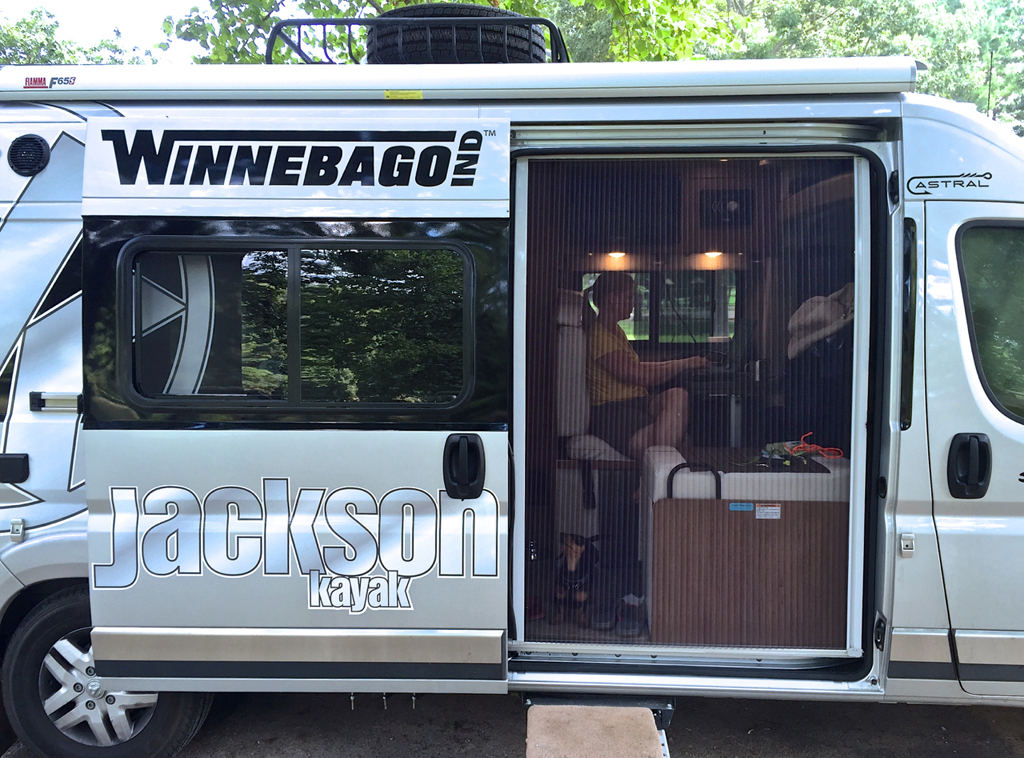 With Ashley and Tripper enjoying some open-air time at her office, it was time for me to hit the water. I had learned a little about the trout habits here on our first visit, and was eager to try some new strategies. I'm a thinker. Observant thinkers tend to make good fly fisherman -- learning to read the clues around you and use them to your advantage to solve the puzzle is what fly fishing is all about.

The problem I was facing on this day was how to get a big brown trout, which are extremely spooky, and tend to feed at night, to eat a fly on bright sunny day, from a kayak. Step one in the puzzle was to paddle my Jackson Kayak Kilroy upstream, against the current, without spooking fish that I wanted to fish for.

This river sees a lot of traffic, and fish are used to it, but I don't care where you fish, relaxed, undisturbed fish are easier to fool and get to eat. The boat traffic here tends to hold the middle of the river. The current there is however too strong to paddle up, so I have to hug the banks and use calm eddy's there to get up there. Relaxed fish tend to also be where I need to paddle though, so that means memorizing each seam and pool as I go upstream, look for fish from a distance, and try to fish zones I didn't disturb on my way up, on my way back down.

That strategy worked pretty well on my way to the dam, and I saw some fish I wanted to target, and the plan was working out nicely. Then the horns went off. Horns that mean the dam is opening up, and water is rising, quickly. Within a half hour the river was a couple feet higher, and twice the volume. All those features I was trying to use to my advantage were gone. New plan time.

Big changes in river flows move fish. They stir food up, eddy's of calm water where fish like to rest change locations, etc. They also make swimming in deeper water harder, so larger predatory fish can have a tendency to shift into holding lies in the shallows, waiting for easy food to pass by.

When the White River rises that high, most boat traffic leaves, and certainly don't move to the newly formed shallows of grass mats that could clog motor props. I decided to use that to my advantage, knowing big fish would also likely be moving there.

New plan was to slowly drift down the bank along the flooded grass mats, look for fish in the clear water, find them, and catch them. Simple enough. Luckily I have a secret weapon on the back of my Kilroy for this -- the Power-Pole Micro Anchor. The system is a wireless, battery powered remote spike, and with the push of a button on my life jacket, that spike will drive down underwater and into the riverbottom, stopping me in place, like an anchor. Only like an anchor that is push-button on demand, quiet, doesn't splash, and doesn't make a big debris cloud as it scours the river bottom. It's pretty slick.

So, as I floated back to camp, I stopped on every shallow grass mat, driving the Power-Pole into the grass where it would be quiet, and would stop and look for trout hiding in the grass. The undercuts where grass transitions to sandy, gravely river bottom makes great hiding places for trout, and as I scanned one, that's where I saw it. It being the unmistakable spotted golden back of a brown trout, and a big, beautiful one.

Brown trout spotted. First big part of the puzzle solved. Now on to part two, getting him to eat. He was close to the kayak, maybe only 15 feet to my right as I faced downstream. He was under an overhanging tree on the river bank, complicating a cast, but I had great luck, and while I could see the back half of his body, his head and eyes were tucked up under a grass mat out of view. So I could see him, but he couldn't see me. Normally a trout that close would easily see motion when you cast at it in crystal clear water, but not today.

I began making casts from my Orvis 5WT Recon, in water clear enough for me to see the fly for most of it's drift. I began casting, and the fish wouldn't move. I figured I only had a few chances before the game was up and he'd be onto me. Any snag of a branch, or grass, and I'd be busted. After about a half dozen sidearm casts under the overhanging branches, right about when the fly should have been near him, I saw his back move about an inch to the side. He ate.

There's nothing like seeing a big brown bust out of his hiding spot and race into the main current. I watched line scream off my Orvis CFO reel and go into my backing. He was on a mission. I released the Power-Pole with the touch of a button, and followed him downstream.

He was on just 5X tippet, and ate tiny, size 20 zebra midge, so I knew this had to be a delicate fight or he'd break my line or bend the fly and come off. Kayaks are great in this scenario though, acting like a buffer to help ease the shock of sudden runs on your drag, and pulling a kayak tires a big fish out quickly. 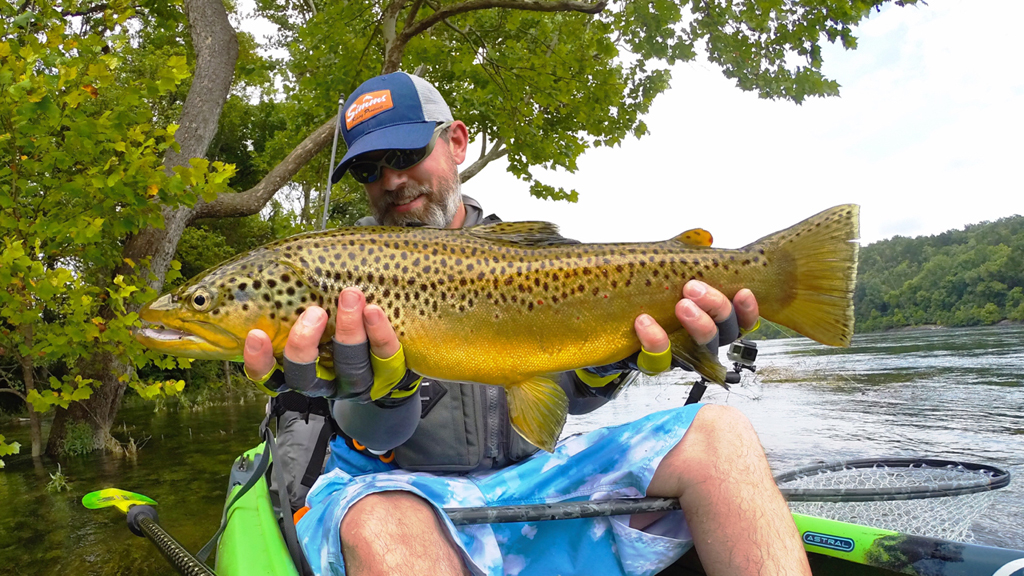 It was a great fight, with a few close encounters only to have him run, some more-than-comfortable fighting that risked breaking the tippet, but was necessary to turn his head and keep him from running into and around submerged logs, etc. 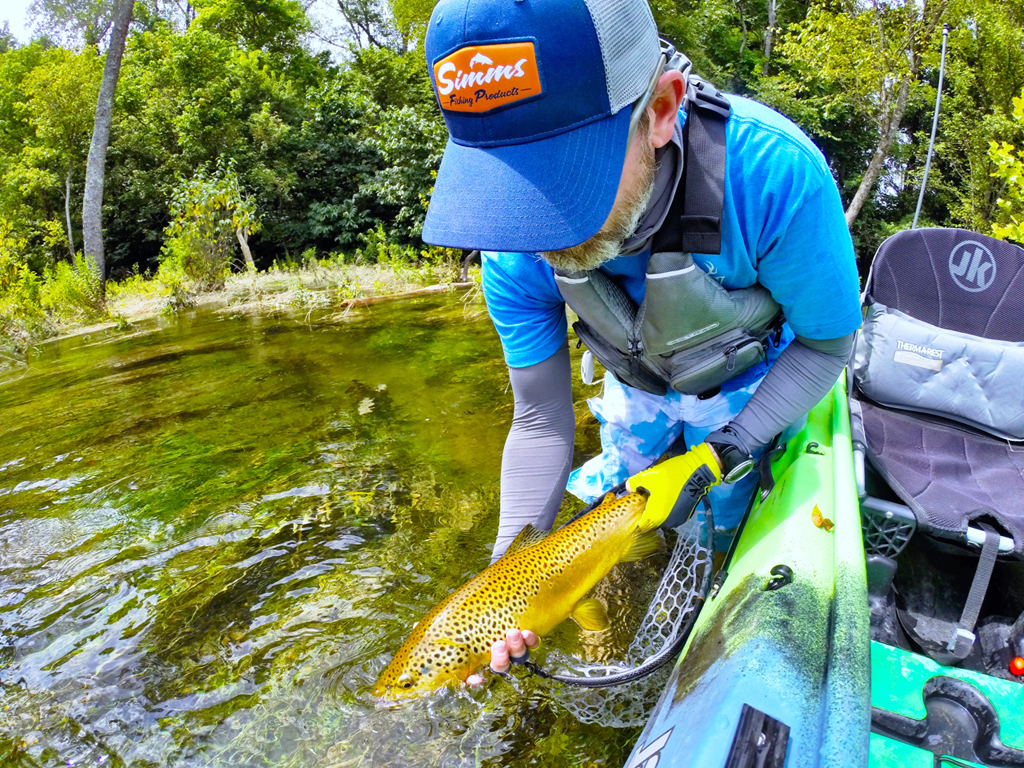 Eventually, enough was enough, and he came to rest in my Fishpond net. I Power-Poled down on the nearest grass mat, and with GoPro's rolling, stepped out, enjoyed feeling the power of his tail in my hand for a while, thanked him and and let him go. 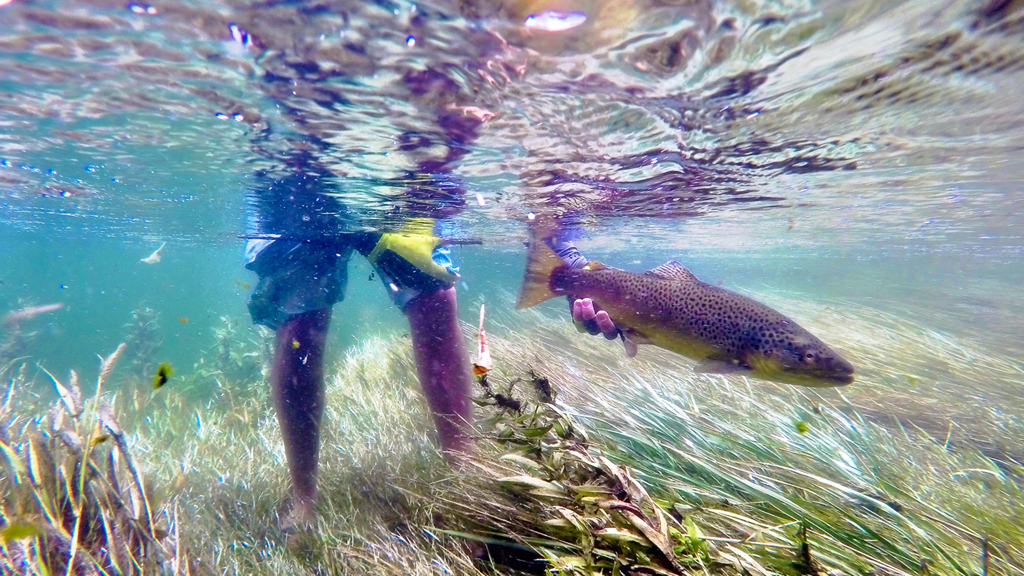 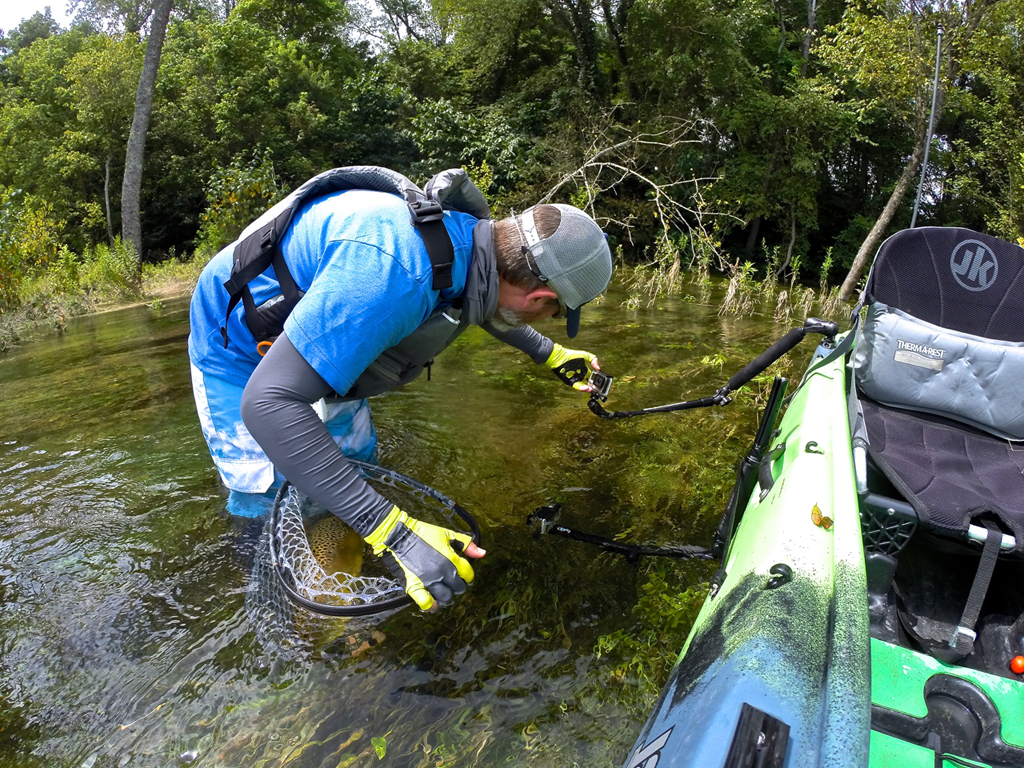 A lot of people ask me where the photographer is for my photos. In all of my stories, he is me. Taking images by myself has taken some practice and learned techniques, but having the right tool for the job is crucial. Almost all of the images in this article were taken on GoPro cameras. Their quality and versatility is unmatched. By strategically mounting them on the kayak using RAM Mounting Systems arms on standard kayak features, they're available and rolling without me having to do much. I can deal with the fish quickly and humanely, keeping it safely in the water, while the cameras do their work. I sort the images out later. 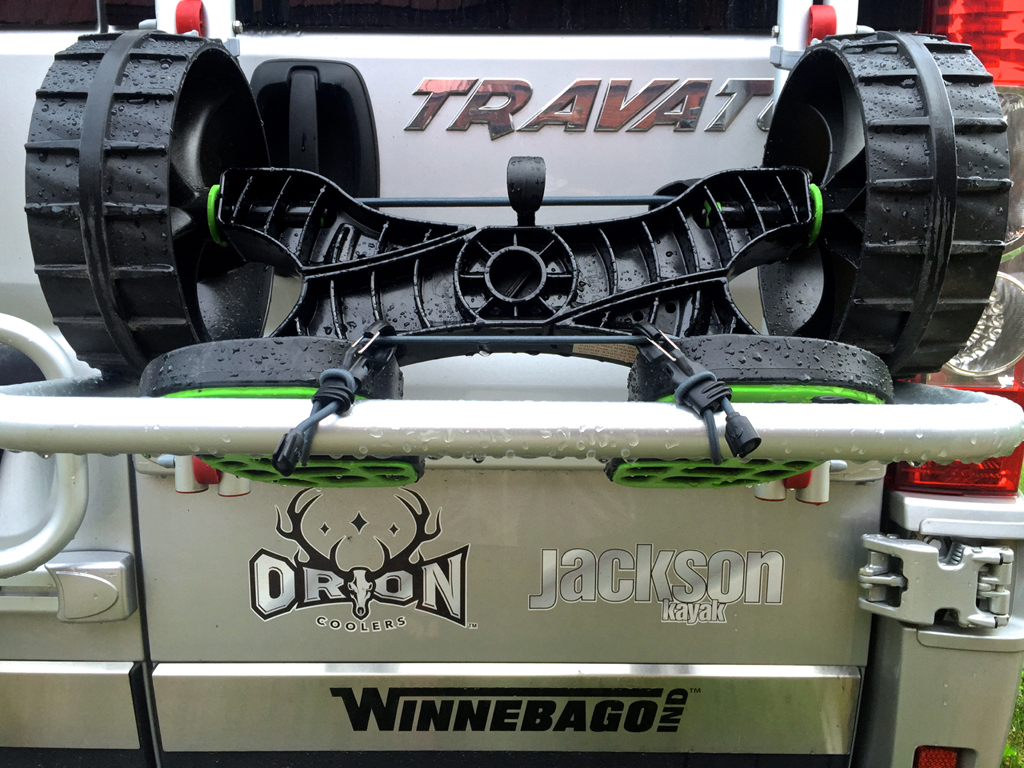 Fishing kayaks can get heavy when loaded down with all of your gear. While an easy two man job to carry, moving alone can be challenging. Rather than bother Ashley and interfere with her telecommuting time, I'll often just use a kayak cart to help me get to and from a campsite. I keep it strapped to the back of the Travato with Nite-Ize Knotbone adjustable bungees so no sand or other debris from the wheels gets inside. 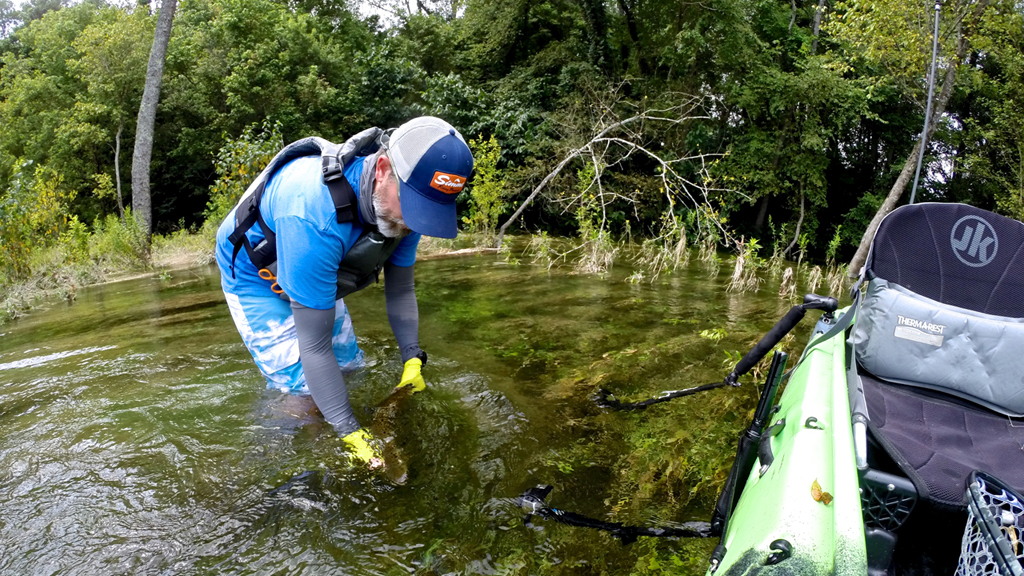 Kayak fishing can mean long days in the sun. The longer you stay comfortable and protected, the better. Tailwaters are great as since they remain cold, even on very hot days you can get into the freezing water to cool off. My favorite kayak fishing shorts are Simms Surf Shorts. They have great pockets, cut, and dry quickly if you decide to take a swim or hold a trout in the water. Long days in the sun means lots of harmful UV rays too, so you'll often see me covered up with products from 12WT. I'll pull a mask up over my ears, nose and face, gloves protect my hands and offer great grip on the kayak paddle, and their sun sleeves compliment a t-shirt nicely to cover your lower arms. All are made from highly breathable and comfortable material, and it's quite soothing to dunk them under water and get them wet -- it's like blowing fresh air conditioning on your skin.