Paddling with Whales: The Gulf of St. Lawrence

Every year the McBeath family joins us for an incredible paddling adventure. This year we had our sights set on an up close encounter with whales in the Gulf of St. Lawrence.

Each year we spend a week with our Canadian friends the McBeath family, and take the kids on an incredible North American river adventure. This year as we were discussing possible destinations, James suggested we take the kids kayaking with whales later in the summer. I was definitely all in for an experience I had dreamed about for most of my adult life. Peter and Abby, on the other hand, were a little less excited about intentionally paddling up close to something so colossal. But with a little coaxing on my part, we found ourselves driving northeast of Quebec city to the small fishing village of Tadoussac, where the Saguenay River converges with the St. Lawrence. This confluence provides an optimal environment for plankton to flourish and therefore a late summer mecca for a variety of species of whales including: blue, sperm, beluga, minke and occasionally an orca or two. 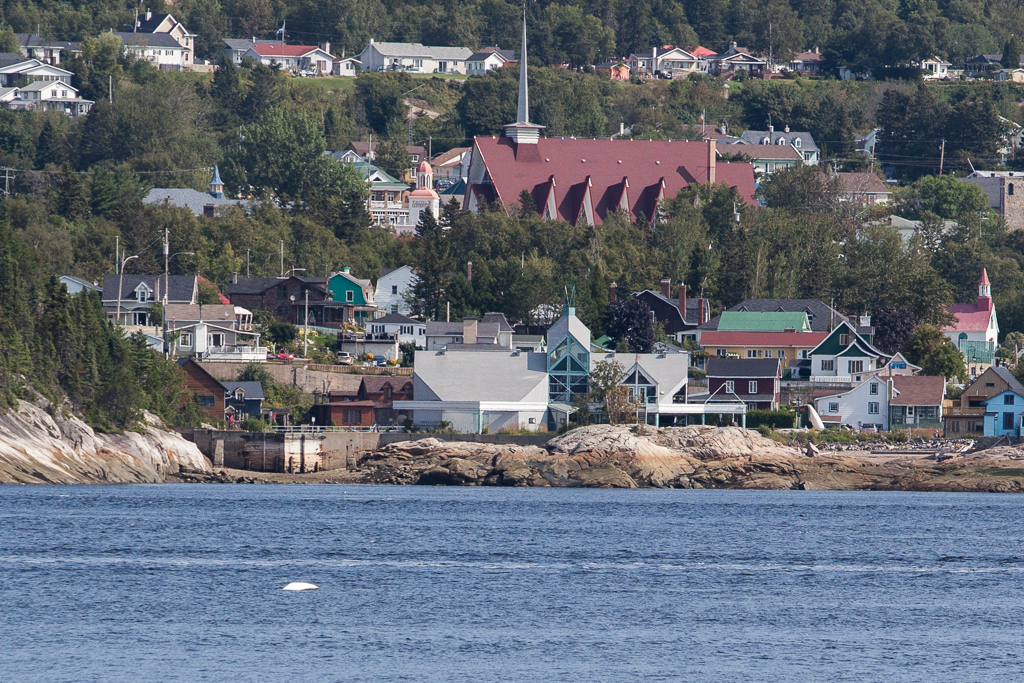 Spirits were high as we spotted the stark white back of a rare beluga whale while crossing the Saguenay River on the ferry.

While I was wildly excited by the possibility of a close encounter with a whale at water level, I was also skeptical if we would actually see any whales, and also a bit anxious about what an up close experience would be like with a creature so large, where my presence is completely inconsequential. As we neared the ferry terminal to cross the Saguenay river, the road climbed up a hill giving us a birdseye view the St. Lawrence river and almost immediately, we caught our first, split second glimpse of a inky black, arcing whale back slicing through the silvery surface of the glassy river. And then another, and another. My doubts of searching endlessly for whales were obviously completely unfounded - the whales were there! As we waited for the ferry to shuttle us across, we spotted what appeared to be small icebergs bobbing at the surface of the river, but what turned out to be a pod of endangered beluga whales glinting brilliantly white on the horizone, a stark contrast to the dark blue water of the river. With multiple whale sightings under our belt, I could hardly contain my excitement, and the remaining twenty minute drive to Mer et Monde Campground in Grand Bergeronnes, Quebec seemed to take an eternity. Even after a five hour drive with little food, not a soul in our group suggested that we do anything but unload the kayaks and hit the water when we arrived at camp. We worked together to unload boats and locate gear and quickly headed down the boat launch. As we were carrying boats to the water's edge, a sleek black shadow slowly arose out of the water not thirty feet from where we stood. We watched with our mouths gaping for the entire five seconds it took for the massive length of the whale to complete it's arching trajectory across the surface of the river. 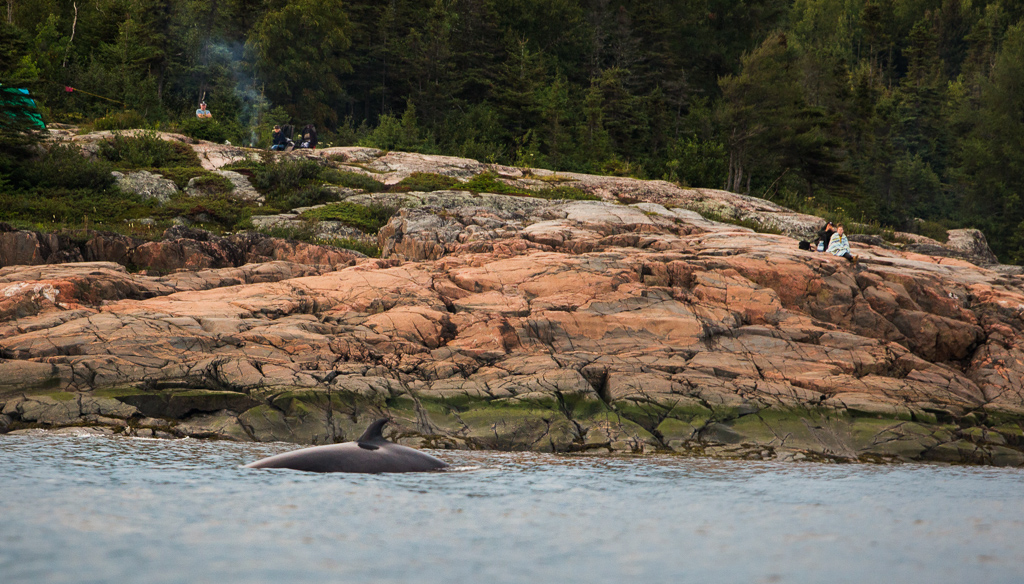 A minke whale welcomes us to Mer et Monde as we prepare to launch for the first time.

We quickly donned our paddling gear and slid our boats into the water just as the sun dipped below the horizon. We stealthily paddled out toward the center of the river, confident that our stars were properly aligned for an epic whale extravaganza. And surely enough we spotted the familiar stark white dorsal fins bobbing, way out in the distance near the horizon. We paddled tirelessly as the sun sun dipped below the horizon, oscillating between the two horizons in a frantic scramble toward one distant sighting and the next seemingly never quite close enough to get a good look. It was a sly game of cat and mouse, and we were certainly the silly cartoon cat chasing endlessly down dead end paths until it was too dark. Tired, hungry, and disappointed, we drug back to camp, vowing to try again at dawn.

Well before sunrise, we were up, fed and at the boat ramp for round two with the whales. Unfortunately, it was a windy, rainy morning and the chop on the water made it incredibly difficult to see much of anything. After three hours battling the elements, we surrendered back to Winnie the View seeking refuge and comfort. We tried again later that evening to no avail - not a single whale sighting all day. 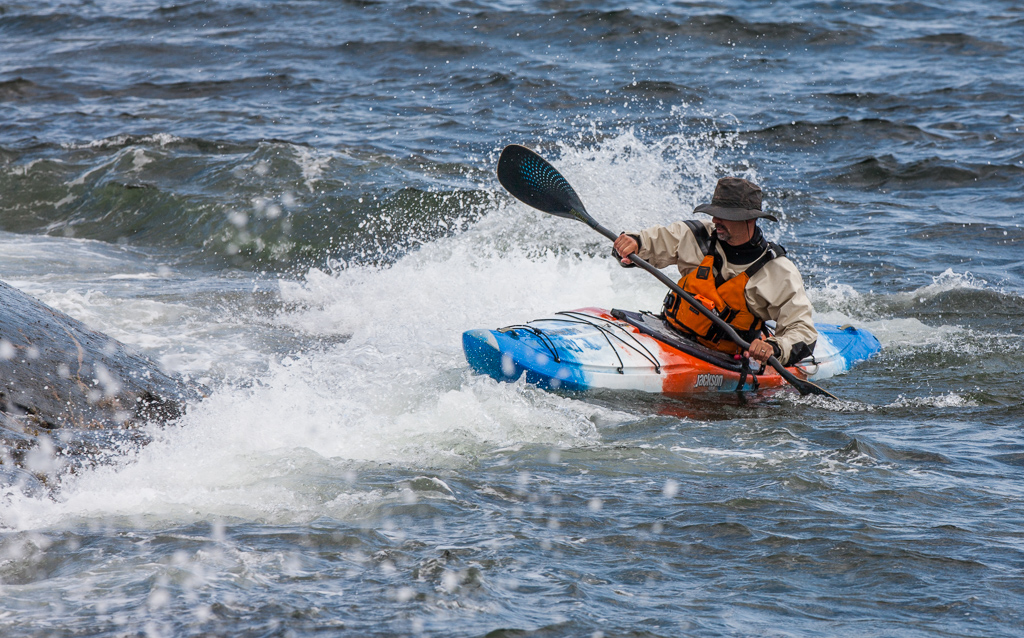 James returning to shore after a rough morning on the water.

The next morning we were up again determined that we WOULD see a whale before we left. The weather finally gave us a brief reprieve from the dreary drizzle and we set out again. We were graced with a private performance of a large pod of porpoises who danced playfully all around us. A seal would periodically pause, with head lifted out of the water, keeping a watchful eye on our whereabouts. At last, just as were were about to return to camp, a single dorsal fin surfaced less than a quarter of a mile away. I turned my boat and charged toward the fin, hopeful that at last I would experience kayaking with a whale. The fin lingered at the surface and I quickly closed half of the gap between us, and then another half. I was within fifty yards of the massive fin that seemed to hover right at the surface of the river. This was an unusually prolonged surfacing compared to what we had seen in the distance previously. So long in fact, that something seemed wrong. I stopped paddling and watched, trying to understand the frantic alarms going off in my head. 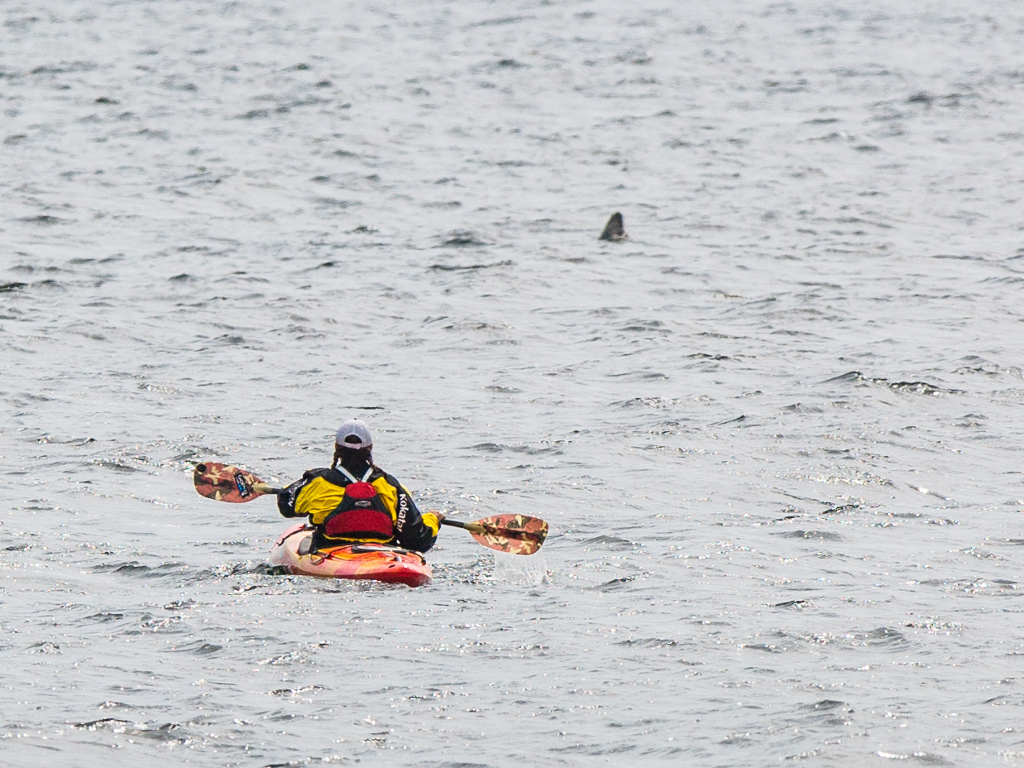 Then alarms came from behind me. James was screaming at me, "Not a whale!!...NOT A WHALE!!...IT'S A...SHARK!!!" Immediately the adrenaline kicked in, but I was torn as to what to do. Everything in my body screamed to paddle hard in the opposite direction. My brain said maybe frantic paddle strokes might not be a good idea. The power of reason prevailed and I slowly and smoothly started paddling backward. I watched in horror as the fin changed course, now heading directly toward me, and then slowly dipped below the surface of the river. I froze, agonizingly still, awaiting my fate...and waiting...and waiting...and waiting. Two seconds went by, then ten, and I finally exhaled realizing that perhaps the shark was not coming to eat me. After another intolerably long pause, I slowly turned around to see the rest of the group staring at me in disbelief at what had just happened. After that, with frazzled nerves, we headed back to camp. 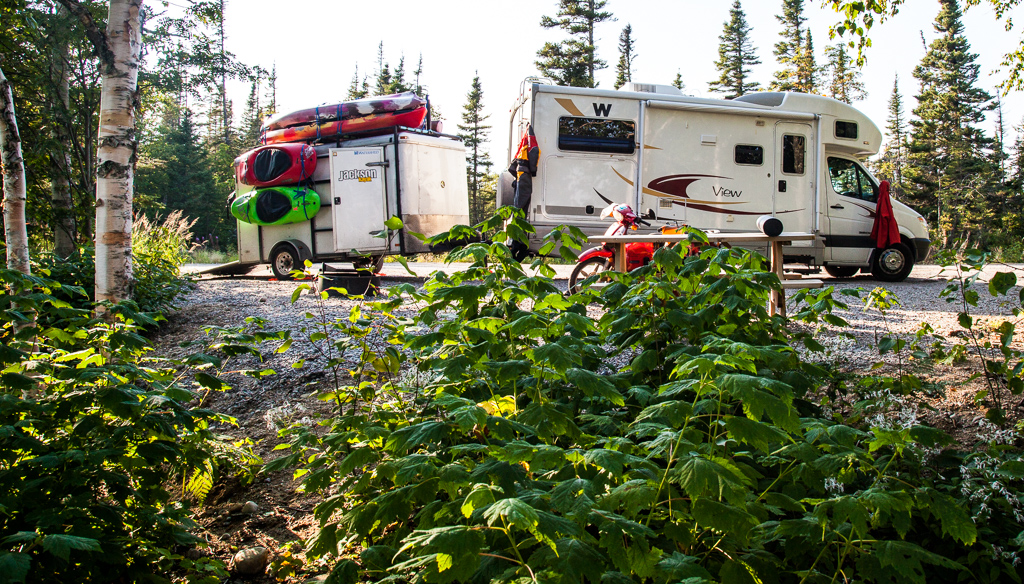 The a few minutes of refuge in the View was just what the doctor ordered to regroup after my close encounter with the shark. 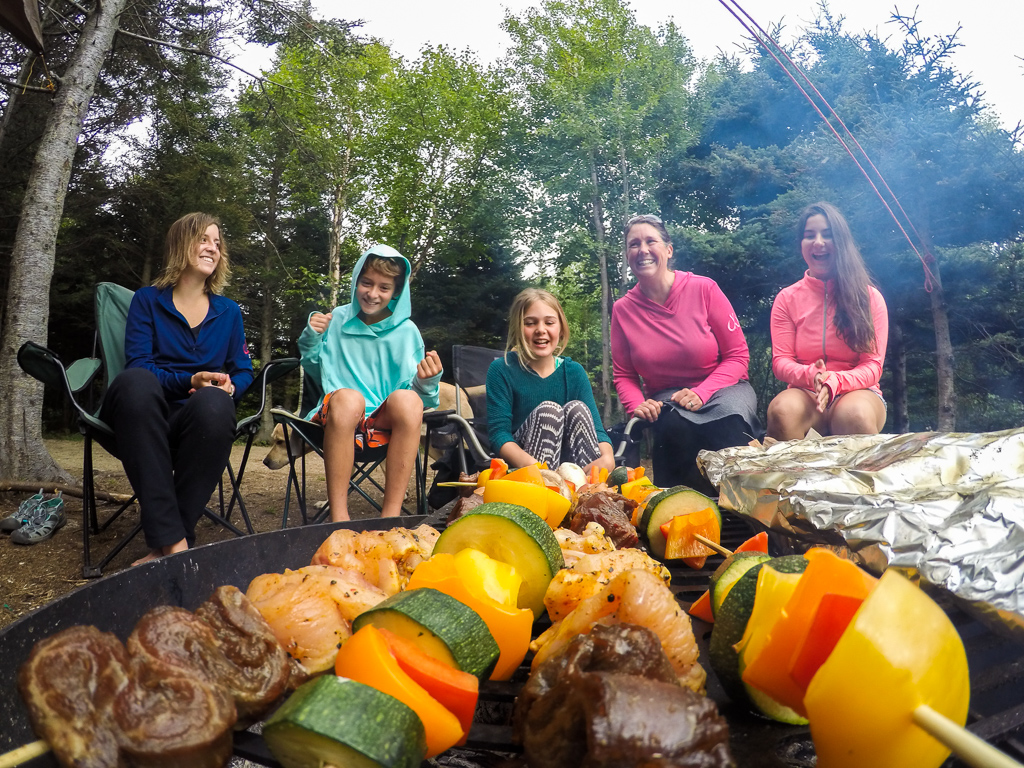 Dinner around the campfire reinvigorated us for our final effort to kayak up close with a whale.

That evening, with renewed vigor we headed out once again for our final paddle in the St. Lawrence. We were greeted again by the seal and dolphins and sat back, taking in a glorious sunset. There were beluga whales off in the distance, and we were completely content as our whale watching adventure drew to a close. As we turned to paddle back in for the last time, we noticed a sleek black fin arcing through the water and headed in our direction. We paused, waiting to see if it would continue on its trajectory toward us. It surfaced only fifty feet away, dove beneath us, and continued on it's course. As we sat together reflecting on what had just happened, we were thrilled to finally have our up close whale encounter. A minute later, we heard a loud breath behind us. The whale had turned and was headed in our direction once again. It dove right before it reached us and we searched frantically in every direction trying to anticipate where it would surface. We didn't have to wait long before it rose from the depths not 10 feet away. Abby and her friend Sam were the closest and squealed with an equal mix of terror and exhilaration as the thirty foot minke whale cruised right beside their kayaks. It was without question the experience of a lifetime, and one we continue to share as a favorite from this wonderful life on the road. 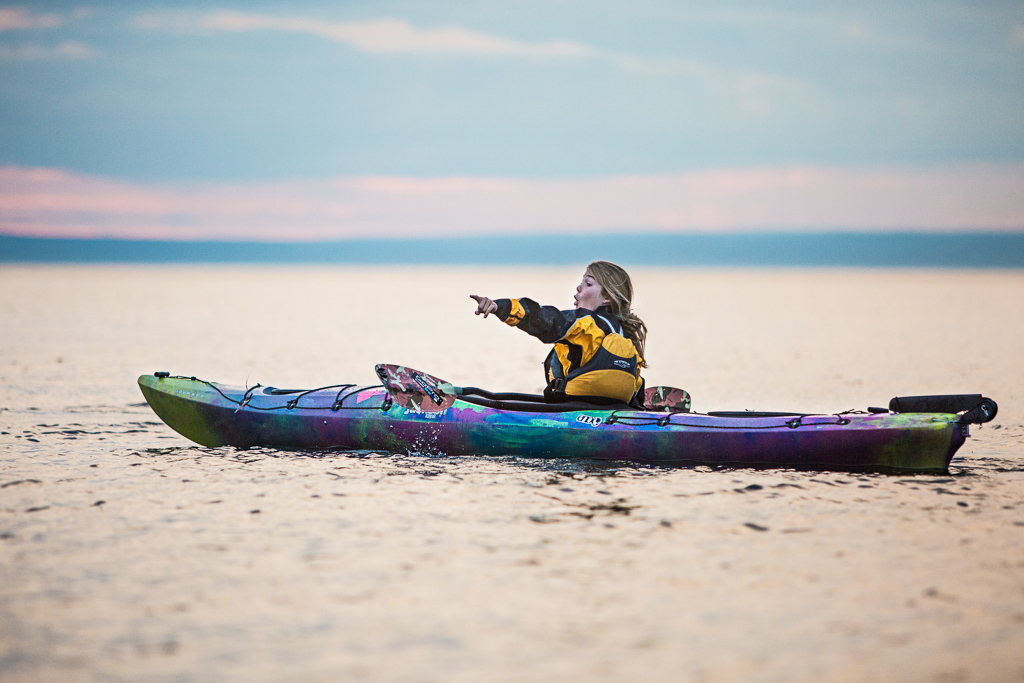 Abby spots a whale, three times the length of here kayak, headed directly toward her. 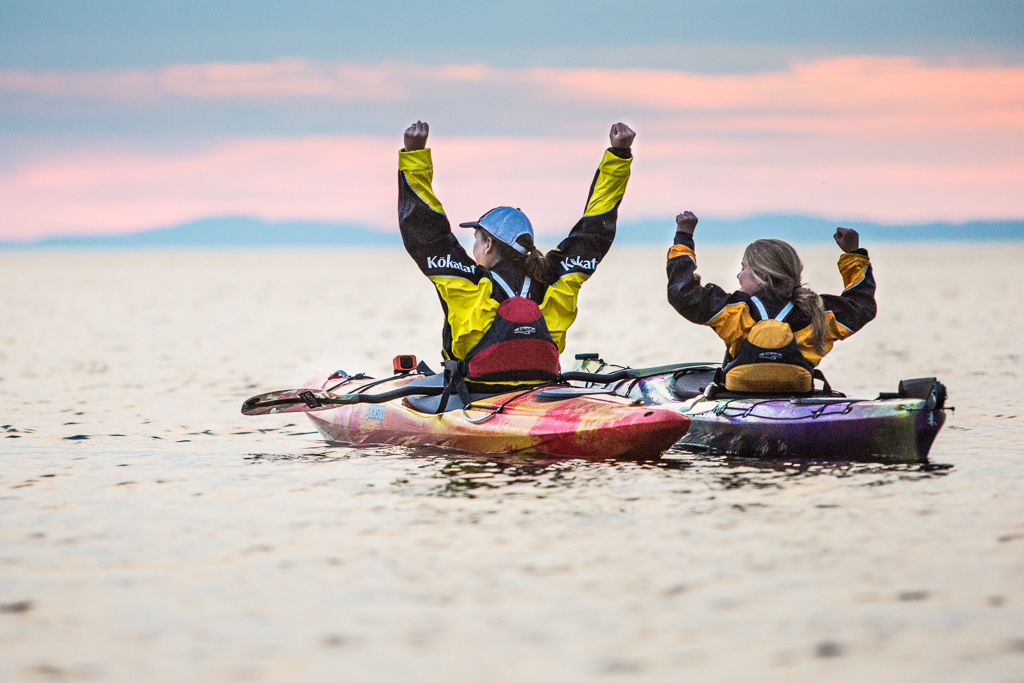 It was without question the experience of a lifetime.