While touring the Newhalem Visitor Center in Washington's North Cascades National Park, I learned of a town on the southern edge of the park, Stehekin, only accessible by hiking, float plane, or boat ride up Lake Chelan. I was instantly intrigued by the thought of such a remote village with a population of less than 100, situated at the end of a fifty mile long lake amid a glacially carved mountain range so rugged, no roads have ever been built there. 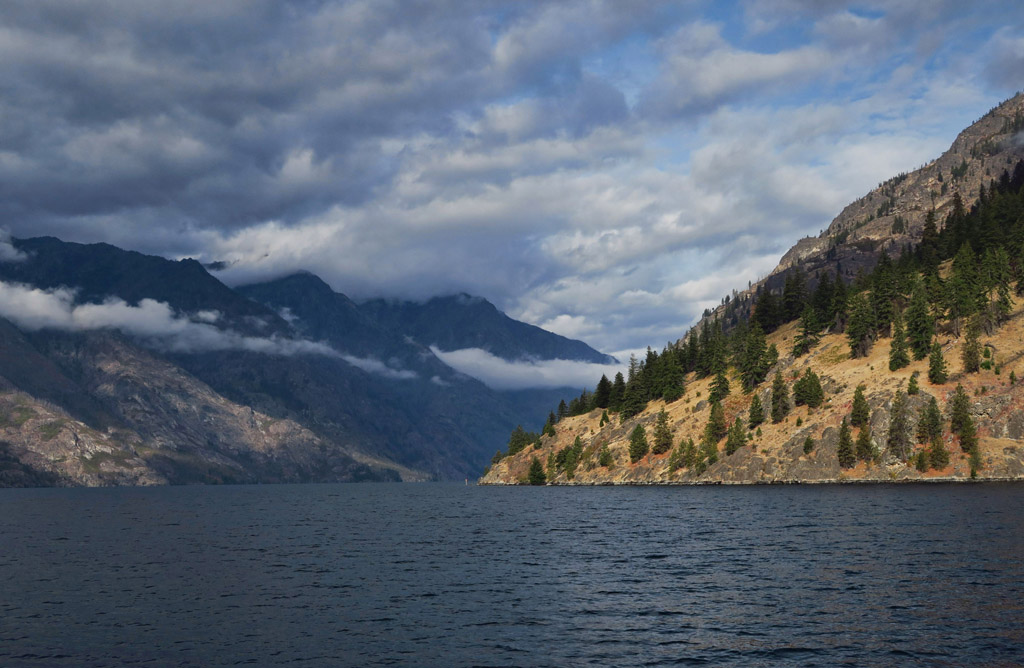 If one is to hike in, it's a 30 mile hike beginning at Cascades Pass near Marblemount, WA on the western side of the National Park. There is no type of hiker shuttle service, so this would require a good bit of coordination and more than one vehicle. It would also require considerable planning, as a minimum of two overnights would be required to reach Stehekin by foot. 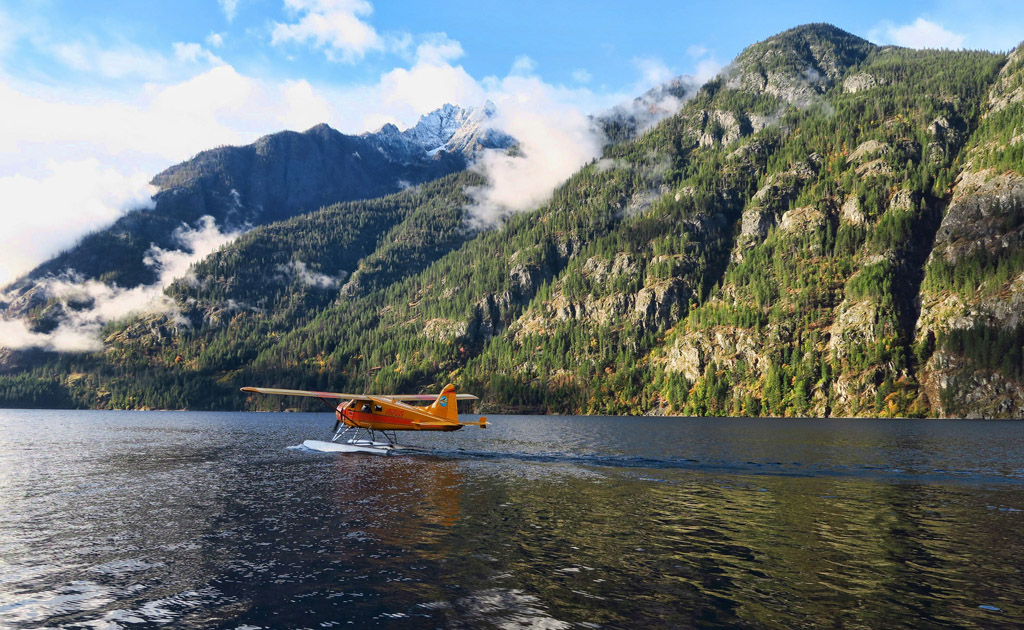 Float plane would be a fun adventure, but $79 each way makes it a bit pricey for such a short hop. Besides, I want the experience of cruising along the scenic shores fifty miles up the deepest lake in the nation, Lake Chelan.

To reach Lake Chelan, the launch point for the Lady of the Lake boat trip, one must leave the North Cascades National Park and drive through the Methow Valley around to Chelan, WA. Although Stehekin is only 30 miles from Marblemount "as the hiker hikes," it requires a 180 mile drive around to reach the mouth of the lake. During my last visit to the Pacific Northwest in 2014, this route was experiencing some intermittent road closures due to forest fires, so I had to abandon my plan to visit for fear of being trapped in Chelan, unable to fulfill my work commitments. So Stehekin was one of my "don't miss" stops during my return visit to the Pacific Northwest. 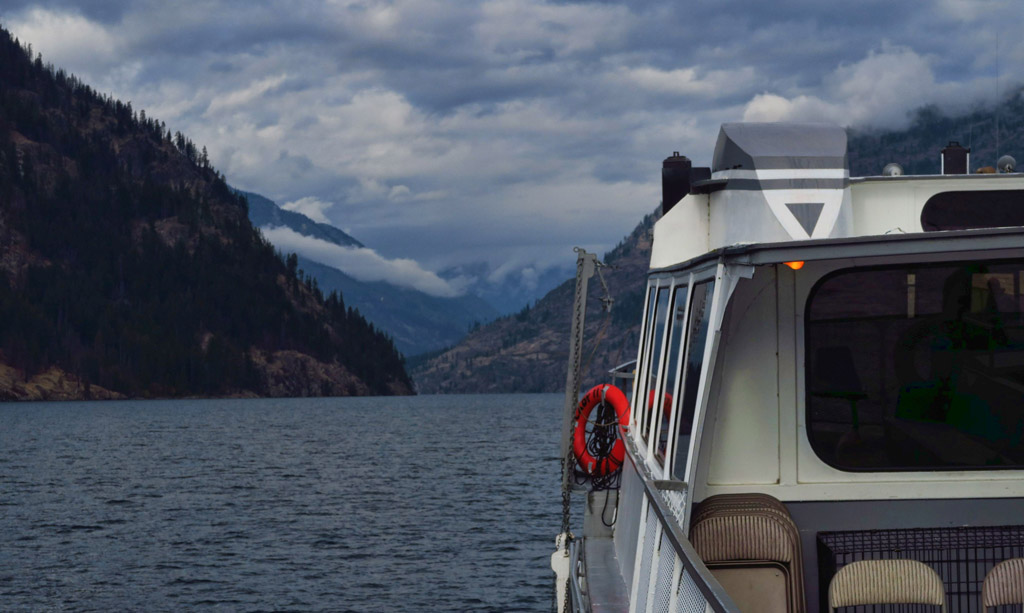 During peak season, there are two boats plying the lake, which makes it possible to have a three hour stopover in Stehekin. But now that fewer people are visiting in the Fall, only one trip per day is operating, limiting the time in Stehekin to a short 90 minutes. In order to have more time to experience the area apart from the daytrippers, it will require an overnight stay. After a lot of research, I finally decide that the North Cascades Lodge will offer the best access for the buck.

I leave the Winnie View parked in the lovely BeeBe Bridge RV Park right alongside the Columbia River. Operated by the Public Utility District, (PUD) Beebe Bridge is one of the nicest county parks I have visited. They offer an off season senior rate for only $15, with water and electric hookups. So I have no hesitation in leaving my rolling home alone for a night.

The Lady of the Lake II, launched in 1976, is the largest of the fleet plying Lake Chelan and the only boat operating this late in the year. She is 100 ft long and holds 285 passengers, but thankfully today the boat is only about twenty percent full. Cruising speed is 15 mph up the lake. During peak season a second faster option, The Lady Express, cruises at 28 mph with 150 passengers.

We board at 8:00am, which means an early wake-up call for this night owl. There are snacks on the boat, but I bring along my own Starbucks for what I fear will be a long ride. Turns out, the four hours passes in the blink of an eye as the scenery morphs from the vineyard rows of the arid lower Lake Chelan valley through the increasingly green lush foothills, gradually probing deep into the stark Cascade Mountain Range. It's easy to see why no roads have been built due to the rugged terrain.

The Lady of the Lake boat ride is narrated, but not so much as to be intrusive. We learn that we will be cruising through the deepest gorge in North America and the third largest lake, surpassed only by Crater Lake and Lake Tahoe. But Crater and Lake Tahoe are 5 and 10 miles across respectively. Lake Chelan reaches this depth at only a mile wide, and at one point, narrowing down to one quarter mile across. The lake dips to 386 ft below sea level, making it the deepest gorge in North America at 8,631 ft. 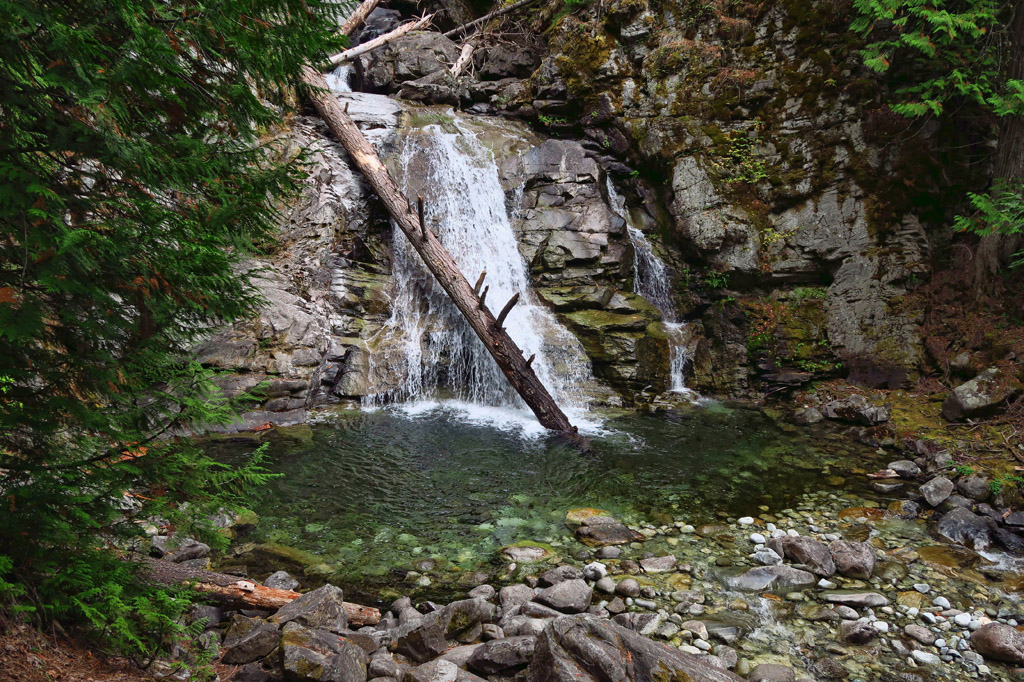 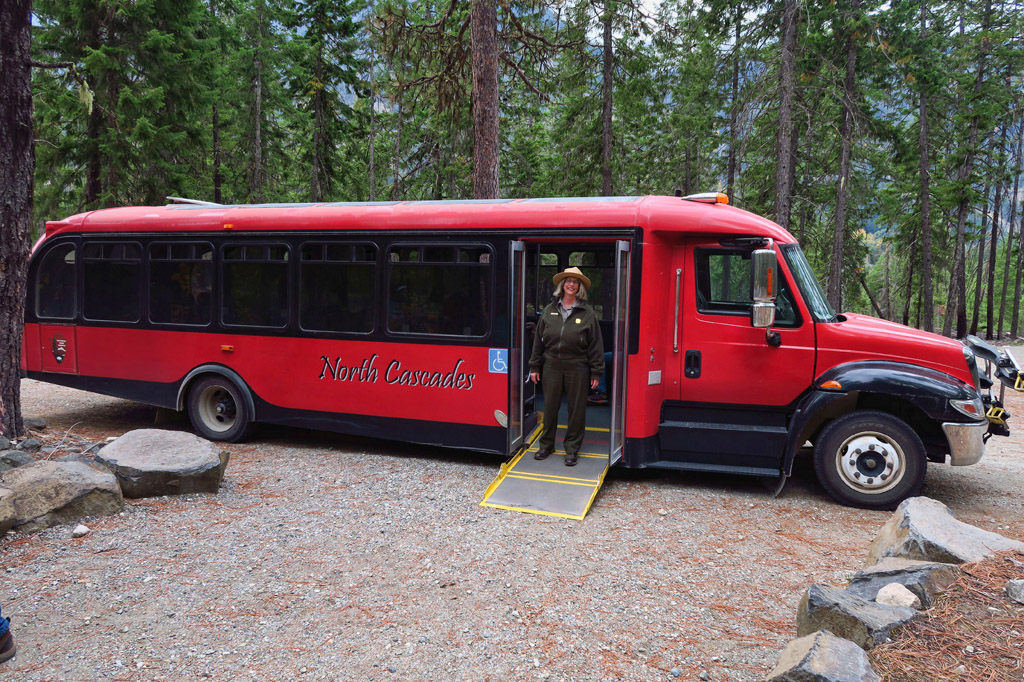 Upon arrival at the boat dock in Stehekin, we are greeted by a National Park Ranger standing beside a big red heritage-style bus with ceiling windows. North Cascades National Park provides optional tours for $9 per person three miles up the only road to Rainbow Falls, a 312 ft waterfall. Stops along the way include the one room Stehekin Schoolhouse, in operation from 1921 to 1988. Following the construction of a new schoolhouse which educates grades kindergarten through eighth grade, the old school has been turned into a museum. 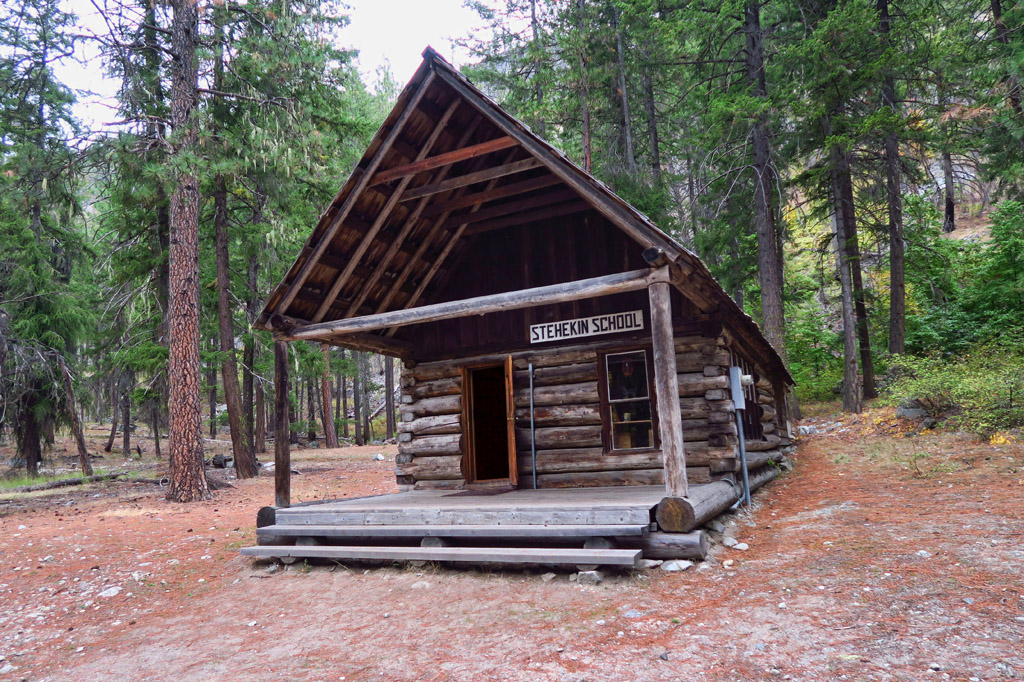 No trip to Stehekin is complete without a stop at the famous Stehekin Pastry Company, in business since 1989. Yet another quaint bakery in a place that by odds, should not be able to support such a plethora of "from scratch" baked goods in a town of this size, regardless of the daytrippers.

The National Parks tour returns to the dock just in time for the daytrippers to meet the returning boat down lake to Chelan. An immediate unwinding is felt as the crowd, albeit small, boards back on the boat, leaving only a handful of residents and those of us staying overnight. 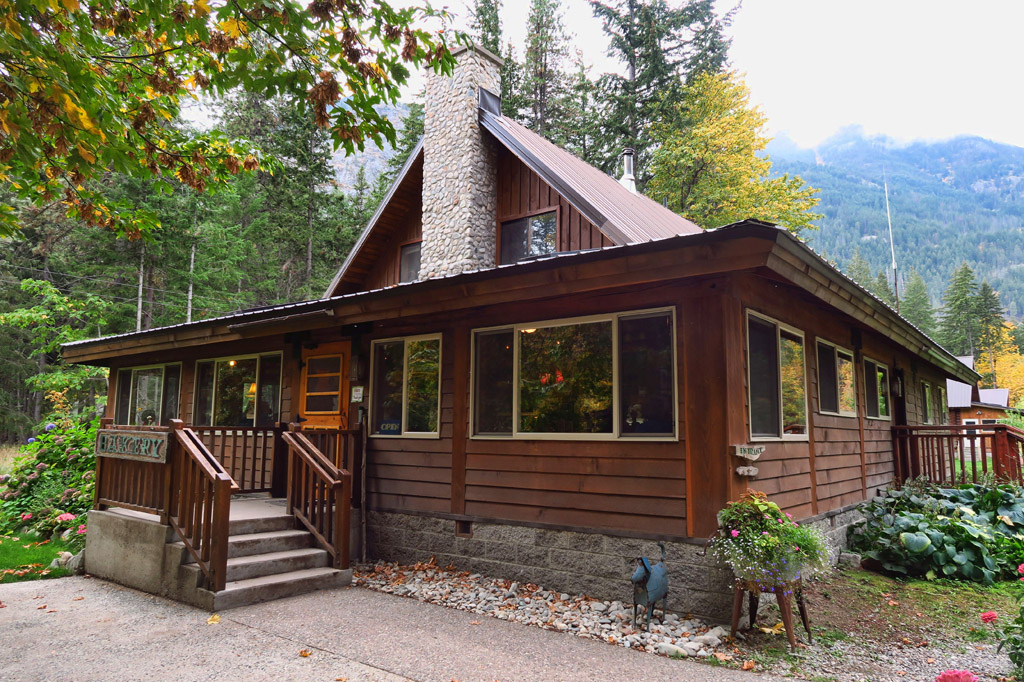 There are many overnight options in Stehekin ranging from the luxurious cabins at the Silver Bay Inn to "glamping" in tented camps at the Stehekin Ranch 20 minutes away from the boat launch. There are also a few privately-owned log cabin options which include a van as transportation, but these are all beyond my budget constraints. The National Park Lodge seems to be the "Goldilocks" of accommodations, offering the convenience of being within walking distance of the boat dock, the Golden West Visitor Center, the Lodge General Store and Lodge Restaurant. Hard to believe it's still the most economical option outside of camping at $134 per night, but when you consider that everything must be shipped in by barge, one can rationalize the cost. 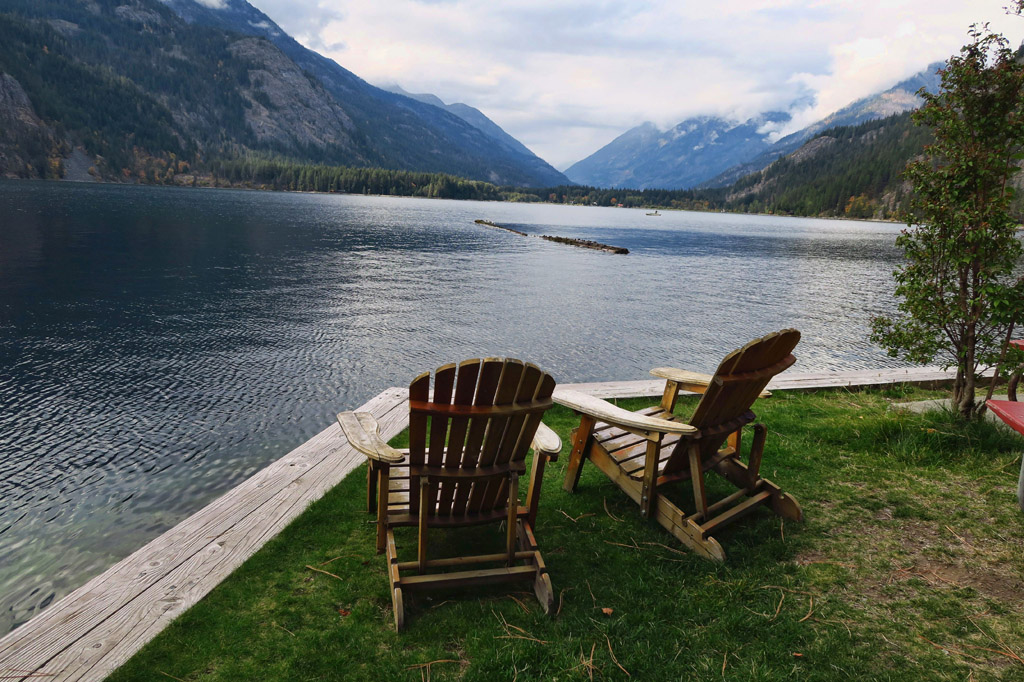 The lodge offers the option of a restaurant serving nightly specials and specialties, one such being Bacon-wrapped Meatloaf over Garlic Mashed Potatoes. Wine is available, but unfortunately this night, "the hikers have drank all the beer." We must await the next shipment...such is life by boat delivery. The evening is rounded out by an excellent talk by the Ranger on "Fire and Ice," the impact of climate change on the glaciers and forest fires of North Cascades National Park. 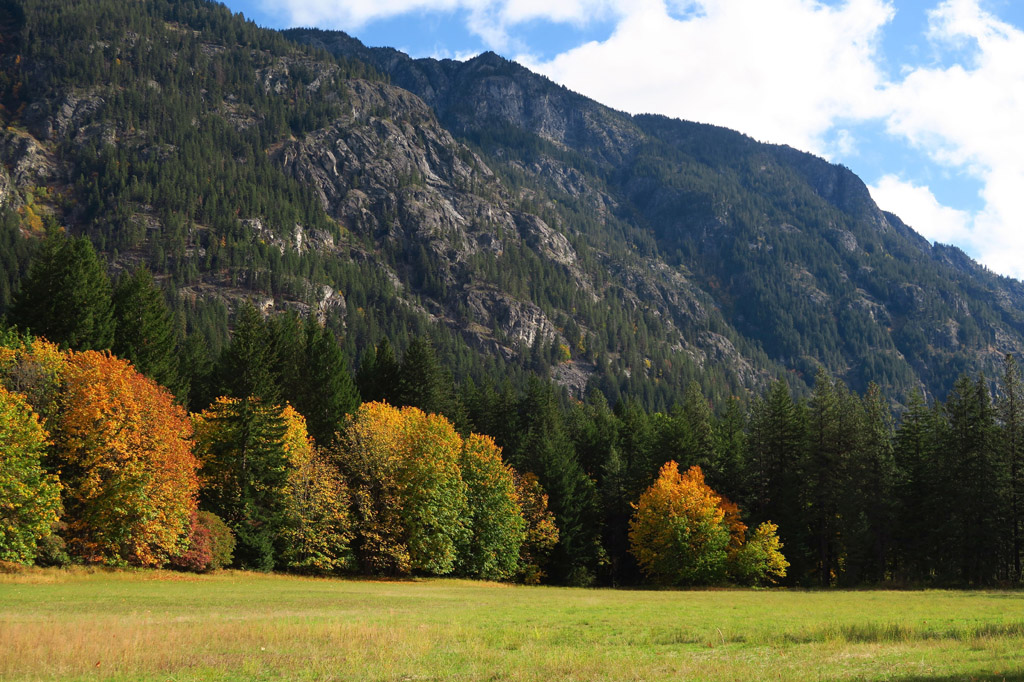 Rain is in the forecast for the second day of my visit to Stehekin, but what a pleasant surprise to not only awake to blue skies, but also a dusting of snow on the Cascades! The morning air is brisk and breathtaking, cold enough to feel like fall, but still warm with sunshine on my shoulders as I sit and watch the clouds part over the rugged mountaintops. 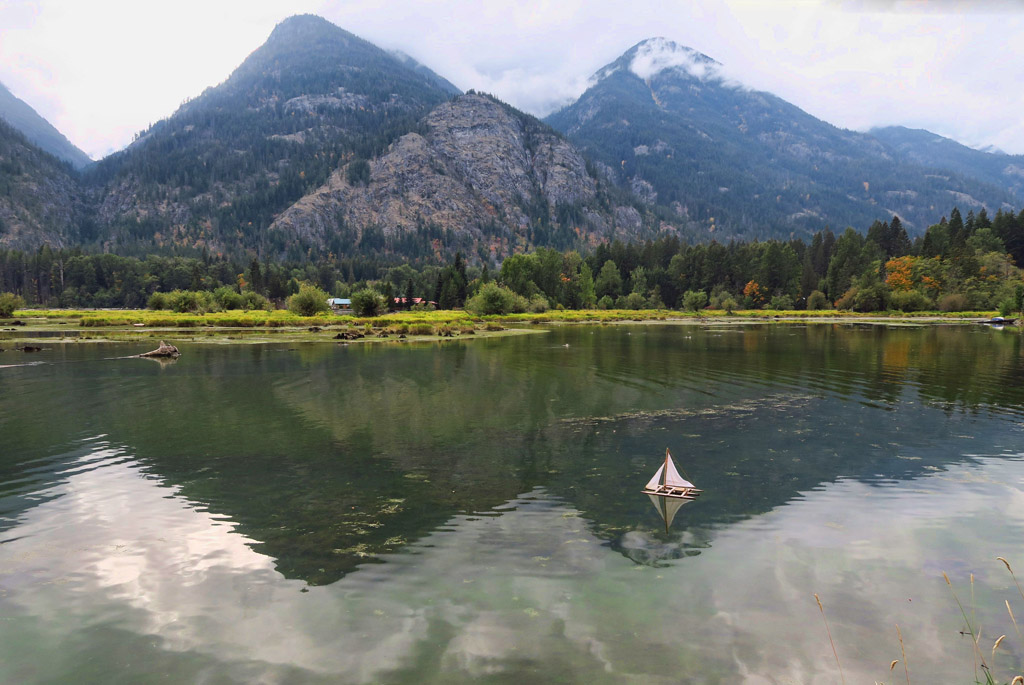 Stehekin is a hiker's paradise with easy, scenic trails leaving right from the Golden West Visitor Center. For the more adventurous hikers, arrangements can be made for the boat to stop on the return and pick up hikers at Moore Point, affording a 7 mile hike from the Lodge. A protruding plank extends from the bow of the boat to accommodate shoreline boarding.

The National Park Service also offers twice-per day shuttle to the end of the paved road, with a turnaround at High Bridge. This scenic stop marks the boundary of North Cascades National Park, and intersects the Pacific Crest Trail. Stehekin is a popular re-supply stop for PCT thru-hikers. I get a chance to meet several of these trail-weathered adventurers, now within less than 100 miles of completion of their incredible 2,650 mile journey begun back in mid-May, they tell entertaining stories of memorable moments on this border to border trail. 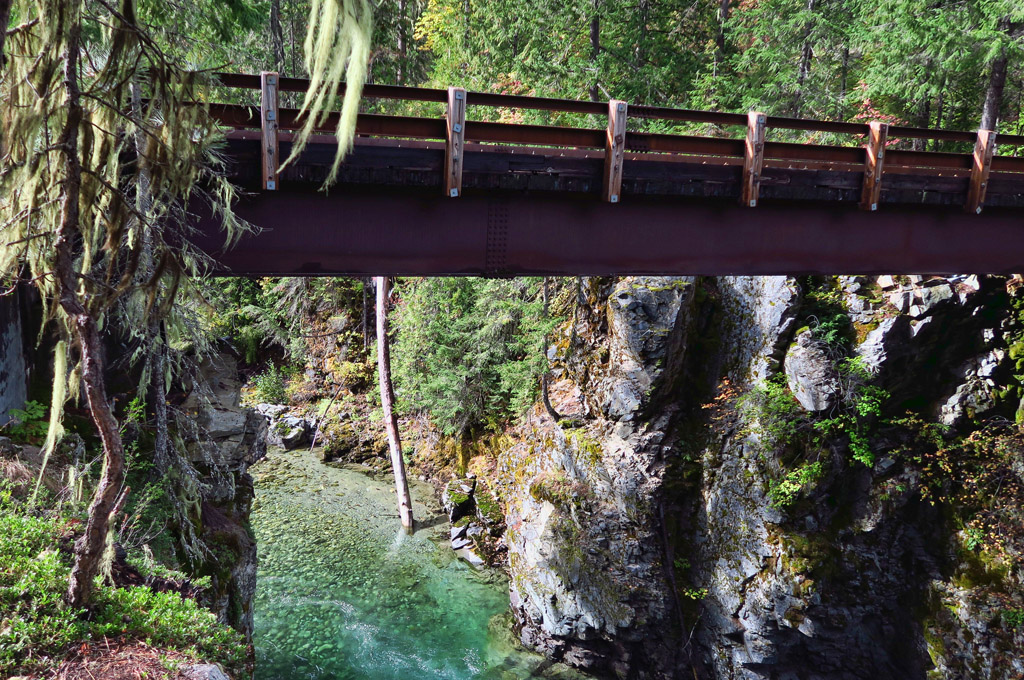 High Bridge spans the wild and scenic Stehekin River, where Kokanee salmon are spawning in the shallow eddies right beneath the bridge. The information kiosk alongside the river reads, "Unrestrained by dams, largely unpolluted, little marked by human development and secluded by high mountains, the Stehekin remains one of America's prime wild rivers. Born of trickling meltwater from snowfields and glaciers above, and from the abundant rainfall the mountains draw from eastbound clouds, the icy emerald waters tumble and turn 23 miles from the heart of the North Cascades to Lake Chelan."

The ride back down lake to Chelan is downwind all the way with the sun lighting up the snow-sprinkled Cascade mountains. As the ride continues, those mountains give way to the vineyard-covered foothills, now cast with long, end of day shadows as we near the boat dock in Chelan. The only thing that could have made the trip any better would to stay longer next time!