Returning to a favorite place is always bitter sweet for me. No matter how hard you try, you can never have that same magical first experience that accompanies discovering something extraordinary. Not to say that subsequent visits won't be just as remarkable as that inaugural experience - simply different. As the approaching cold of winter relentlessly pushed us down the Eastern Seaboard, Dry Tortugas National Park in Florida began to call to us, like sirens to a sailor. And we found ourselves once again at the ferry terminal in Key West, FL about to board the Yankee Freedom for the 90 mile voyage to Fort Jefferson. 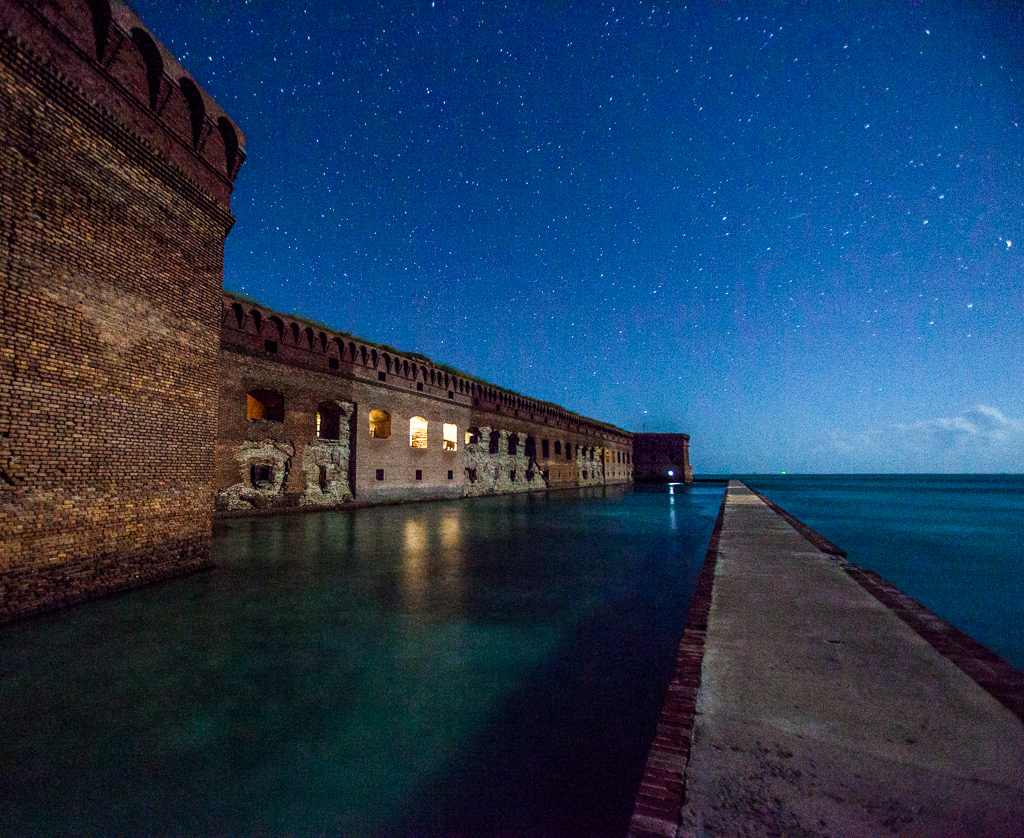 Night time at Fort Jefferson is the best time to be there. The island is almost completely deserted giving the impression of a private island paradise.

Weather reports on the morning of our departure called for high winds and rain for the entire duration of our stay, but we forged ahead hopeful for a break in a very bleak forecast. We were buffeted with rain the entire three hour trip to the island, and were beginning to question our decision to press on, but as we approached the 150 year old fort, the sun appeared and the winds abated. As soon as we arrived, we set up camp and hit the beach, taking full advantage of the window of beautiful weather. 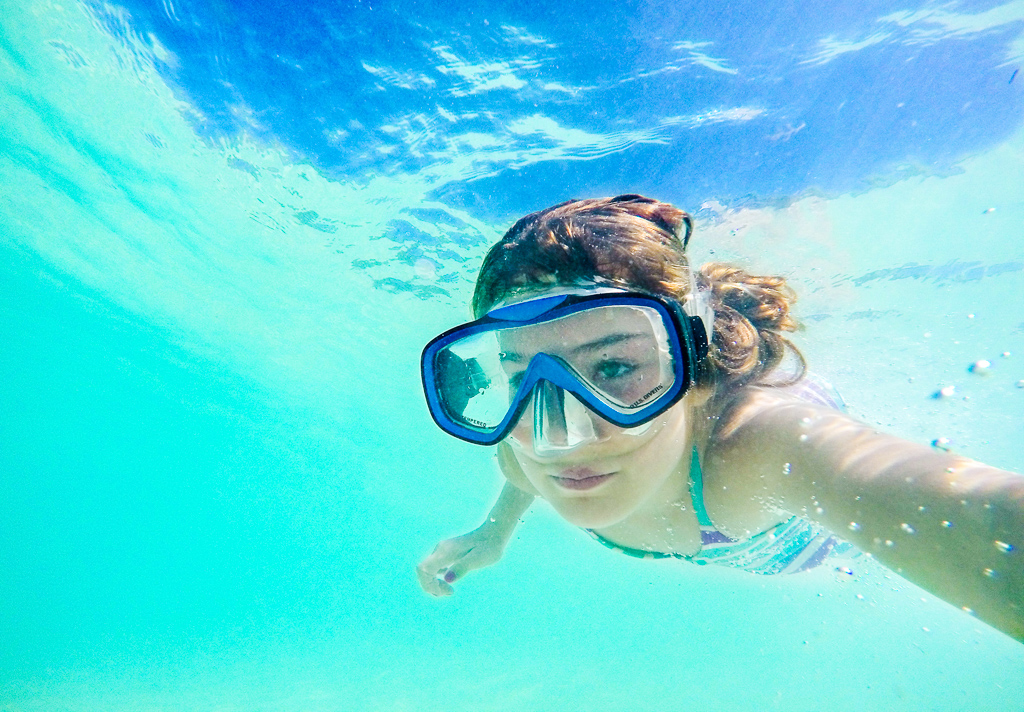 Before long the wind drove us off of the beach and into our mask and fins for a snorkeling tour around the perimeter of the island. Flanking the harbor on either side, lie the remains of two old piers. All that is left are the pilings - a grid of metal beams that once served as a safe haven for ships and now provides refuge for a wide variety of sea life ranging from sponges and coral to barracuda and colorful reef fish. Although there were strong currents that pushed and pulled us through the labyrinth of debris, it quickly became my favorite snorkeling playground. 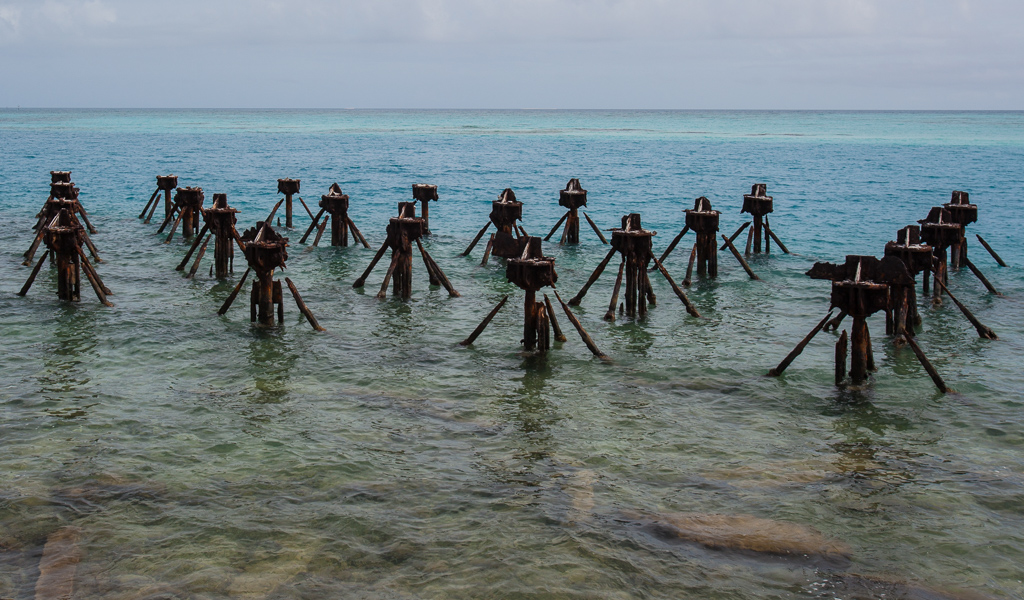 The dilapidated pilings that flanked the fort provide a wonderful habitat for a wide variety of marine life.

That afternoon, as we waved goodbye to the ferry and it's 250 occupants, the almost vacant island became our own with only a few park service employees and a handful of campers remaining. We took up positions on the dock intently focused on it's resident school of snapper, and within hours caught enough fresh fish to feed our hungry party of ten. As evening gave way to night, the kids entertained themselves with hermit crab races, while the rest of us shared stories of adventures past and admired the multitude of stars, both shooting and stationary, that blanketed the night sky. 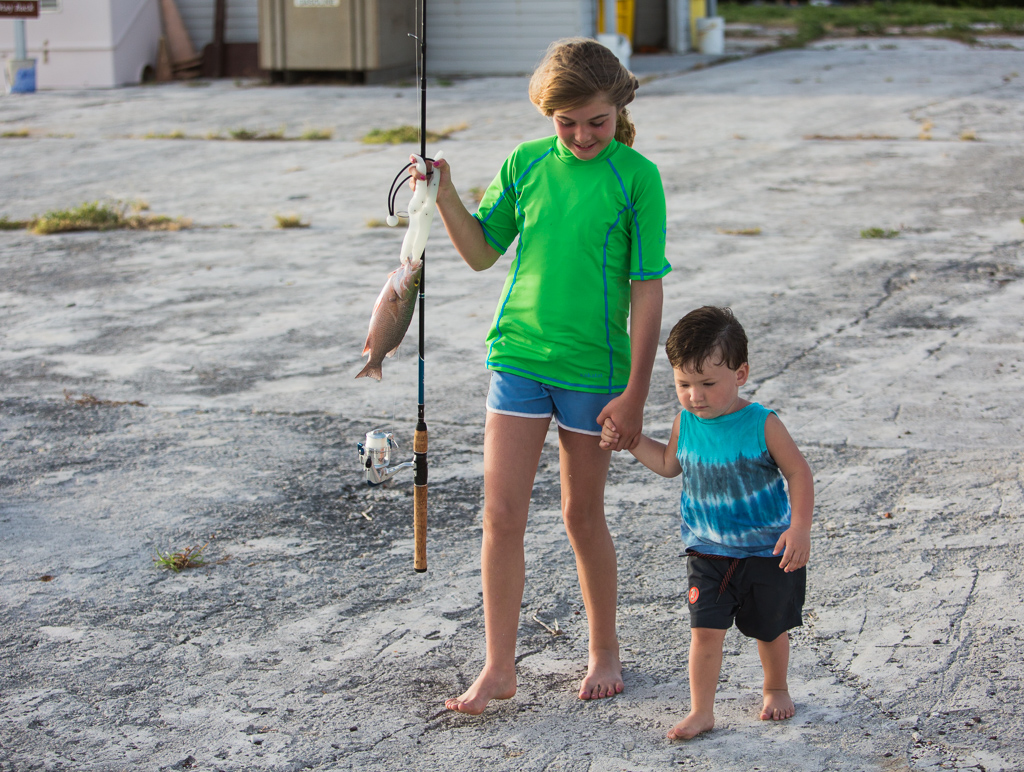 Abby and Tucker bring home their dinner after a successful afternoon of fishing. 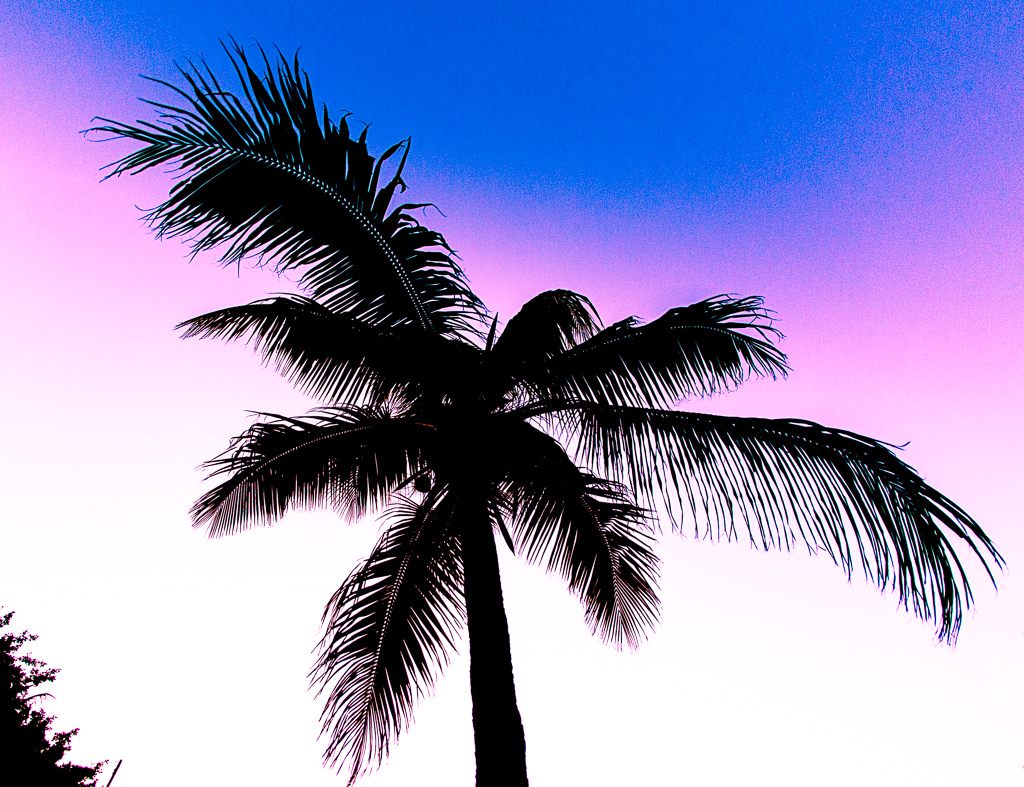 A few minutes before the sun dips below the horizon, the a new color palette transforms the view from our campsite into a breathtaking vista.

The next day we befriended one of the rangers who lived on the island. He shared stories and an insider perspective of the island that kept us entertained us for hours. He taught us how to harvest a coconut for the delicious water hiding deep within the thick husk, and told tales of the colorful inhabitants of Fort Jefferson from long ago. But the stories that had the most profound impact on me, were his personal accounts of Cuban refugees seeking asylum on one of the many islands located within the Park. 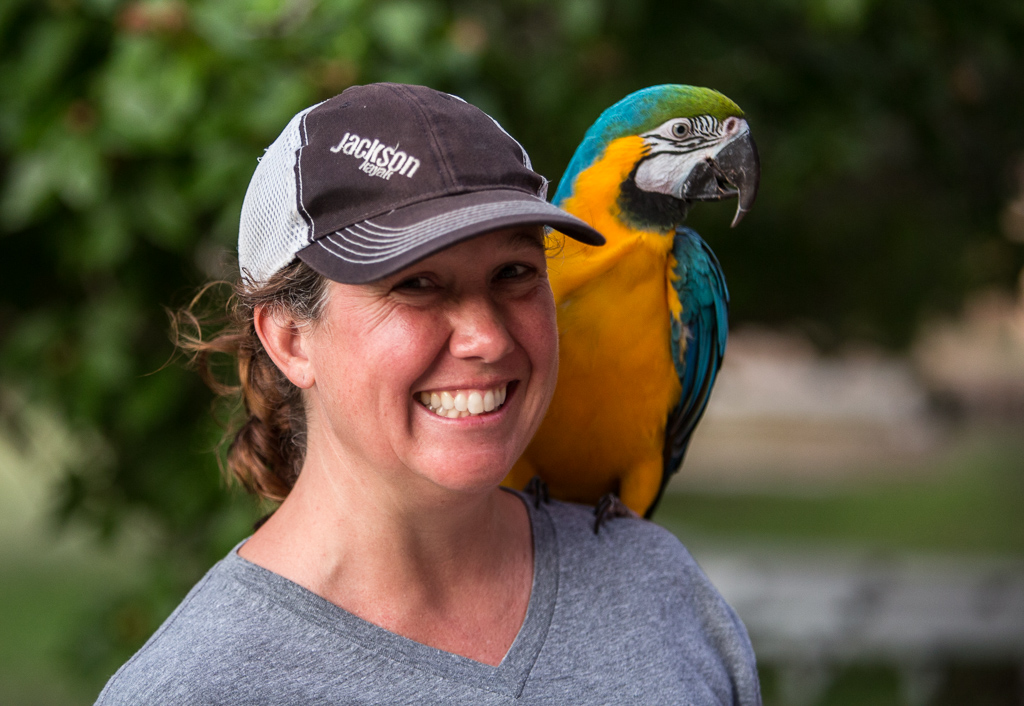 Kathy hanging out with the resident macaw, Jack. 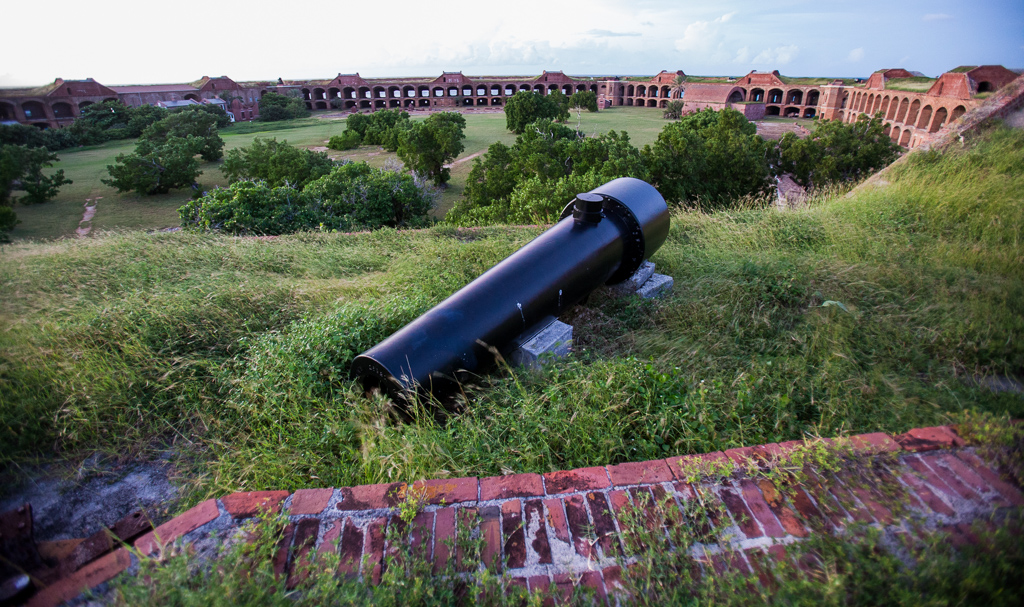 The courtyard that lies within Fort Jefferson is great place to get lost on a lazy afternoon.

His accounts were of vessels composed of bolted together sheet metal with a single, homemade propeller, and powered by a sputtering and often failing motor, typically salvaged from a car built in the 1950s, assembled in secrecy, and arriving in the Park under a veil of darkness. These marginally seaworthy vessels often transported 30 or more people over a hundred miles before landing (or sinking) within the park boundaries. 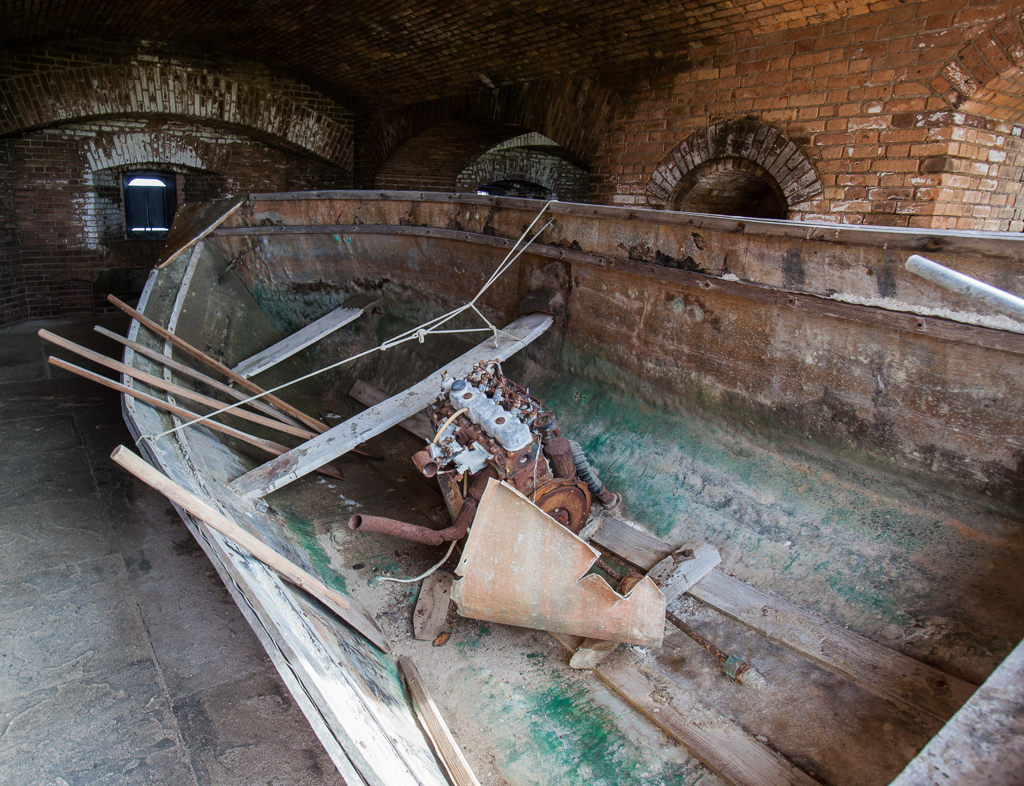 When we arrived at the park, there was a Park Service ship that was resupplying the island and removing six Cuban chug boats that had recently landed on Garden Key. This particular boat was on display within the wall of Fort Jefferson as an important component of the recent history of the island.

In 2015 there were almost 600 landings in Dry Tortugas National Park, and when we arrived, it had been four days since the arrival of the last group of refugees. The ranger cautioned that based on the dramatic increase in the number of refugees targeting the Park, we would likely witness a landing during our four day stint on the island. We were instructed to notify him immediately upon their arrival as they would likely be nearly drowning, and suffering from chemical burns and severe dehydration. 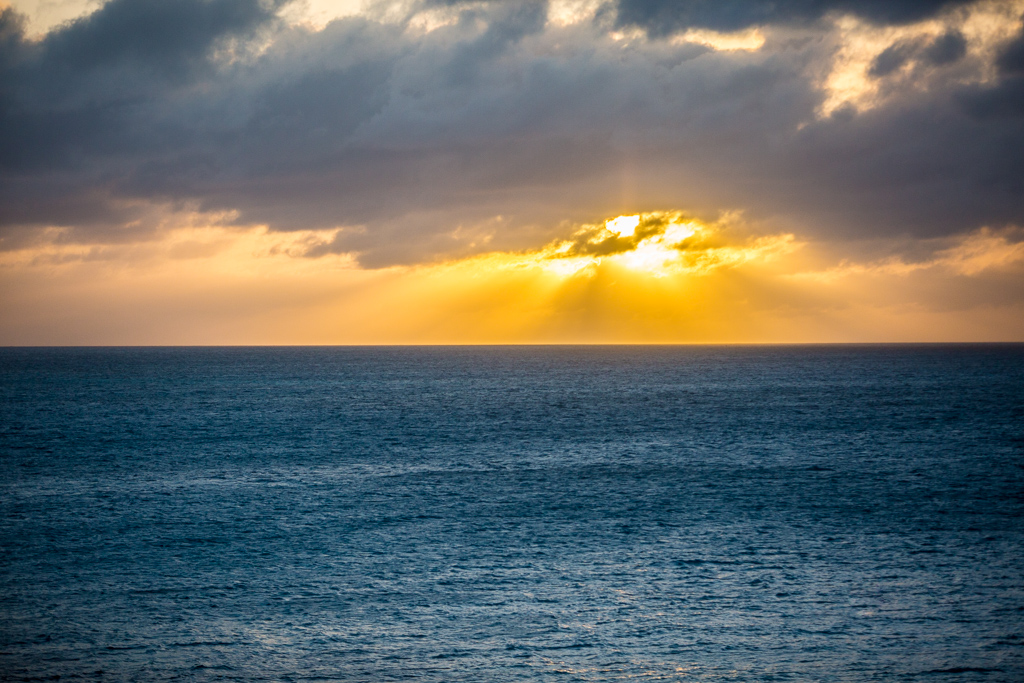 As the sun set over Fort Jefferson, we looked out to sea trying to imagine if there was another family out there looking back at us, ever hopeful to make it to U.S. soil and start as new life.

The responsibility of the Park Service is strictly humanitarian in nature: to provide essential food, water, clothing and basic medical care. After that the refugees are turned over to the U.S. Coast Guard where one of two things will happen: those that step foot on US soil will be transported to Miami where they will be given work permits and financial aid for food and housing. After a year they will automatically be granted permanent residency. Those who do not make it to dry land will be returned to Cuba, often facing retribution for their attempted escape. This is based on a law set by Kennedy known as the Cuban Adjustment Act in 1962 and revised to the "Wet Feet, Dry Feet" policy under Clinton in 1995. With the change in relations with Cuba, it is likely that there will be another revision to the Act in the very near future - thus the recent dramatic increase in the number of Cubans seeking asylum. 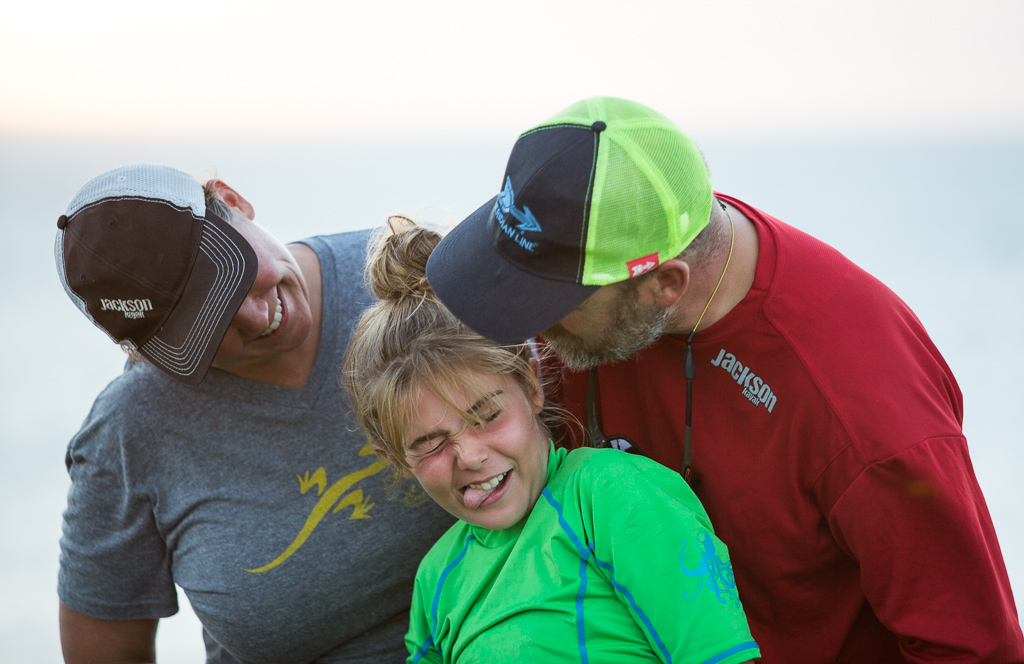 Our weekend escape to an island paradise was a wonderful break from the fast pace of everyday life. Unplugging for a few days brings us closer together as a family.

For the remainder of our four day vacation, I couldn't escape the irony that one family's getaway to a secluded island paradise is the same destination as another family's gateway to a completely new life full of endless possibilities. Both families travel 100 miles across the open sea. While we enjoyed the safety and comfort of the Yankee Freedom ferry boat and spent our days lounging on the beach, fishing, snorkeling and enjoying the leisurely pace of island life, there is another family out there planning an escape of an entirely different nature - willing to risk their lives for the opportunity to live the same hectic lifestyle that we are so eager to escape. 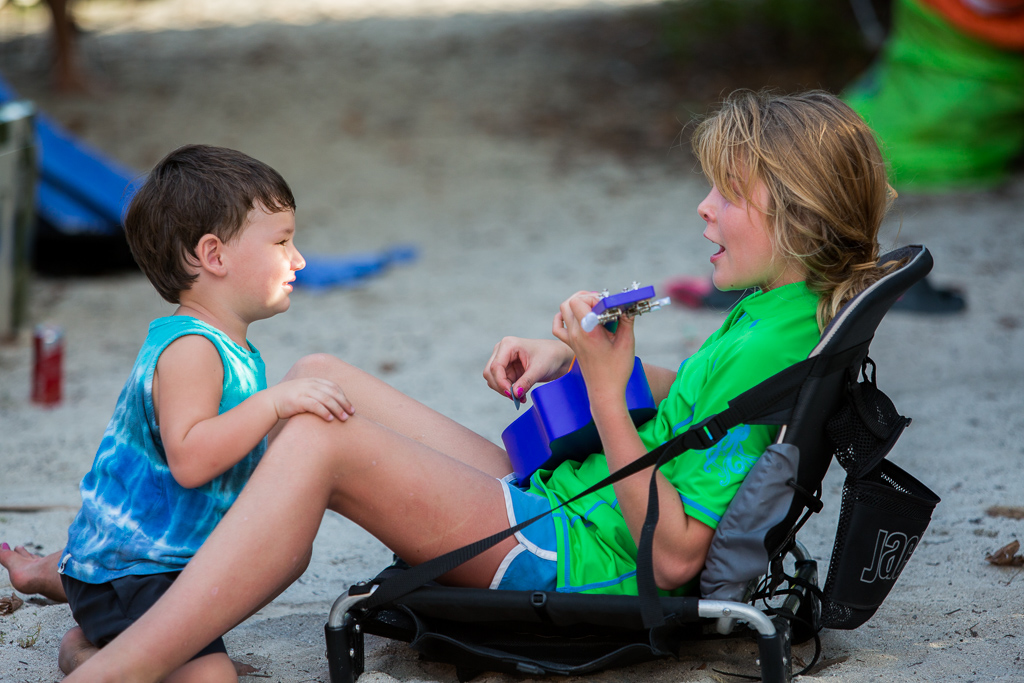 Abby serenades us on our last night on the island.

One of my favorite aspects of travel is the continuous immersion in new environments and new cultures. Regardless of where we go or what we do, we are forever learning about the different circumstances of the people who live there. Because of our return visit to Dry Tortugas National Park, we have gained a new perspective and a greater understanding of life outside of our own personal universe. That, among countless other experiences is what keeps us pushing forward on this grand adventure of life on the road. 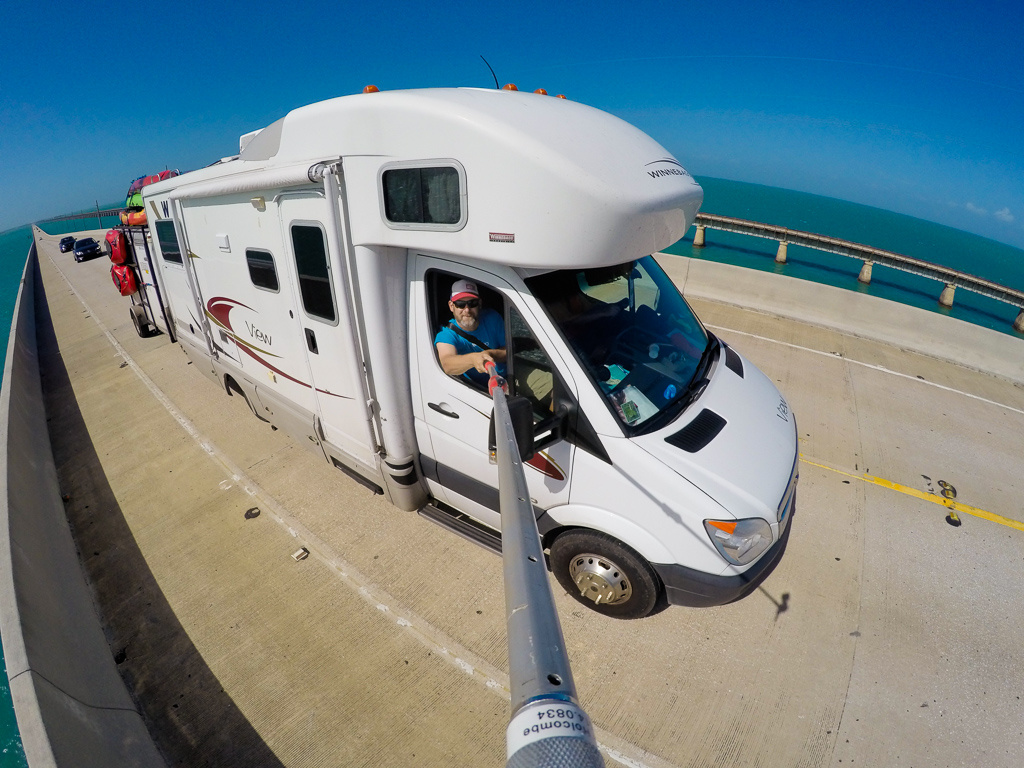 Want to see more? Click here for a short video of our Dry Tortugas adventure.