"We'll meet you at 1 PM Navajo time," said Adam Teller. He was referring to meeting his father for a down-in-the-canyon tour of Canyon De Chelly. (Pronounced: dih-shay) Though primarily in Arizona, with a land mass covering over 27,000 square miles, the Navajo Nation prefers to follow all the other mountain states in switching to daylight savings time, instead of the state Arizona, which still refuses to.

Feel the magic of Canyon De Chelly in this 3 minute companion video.

It's a small detail that reveals the unique character of the Navajo and the special status this nation within a nation holds. The Navajo were fortunate that, perhaps because of their generally pacifistic lifestyle, their native lands were returned to them after the Indian wars, unlike most other native tribes who were forced to resettle in other territories. Yet as we learned, that "return" did not come for five anguishing years after many of the Navajo surrendered to Kit Carson in 1863 and were forced to walk 300 miles east to a resettlement area. In 1868, the Navajo leader Barboncito signed a treaty with the U.S. Government and they were allowed to return to their native land.

The Navajo Nation is the largest sovereign nation within the United States with it's own language, government, and law enforcement. And while at first glance the Navajo town of Chinle, Arizona looks just like any other small southwestern town, the automatic on-the-pump sound commercial at the Shell station starts off with a Navajo language jingle! 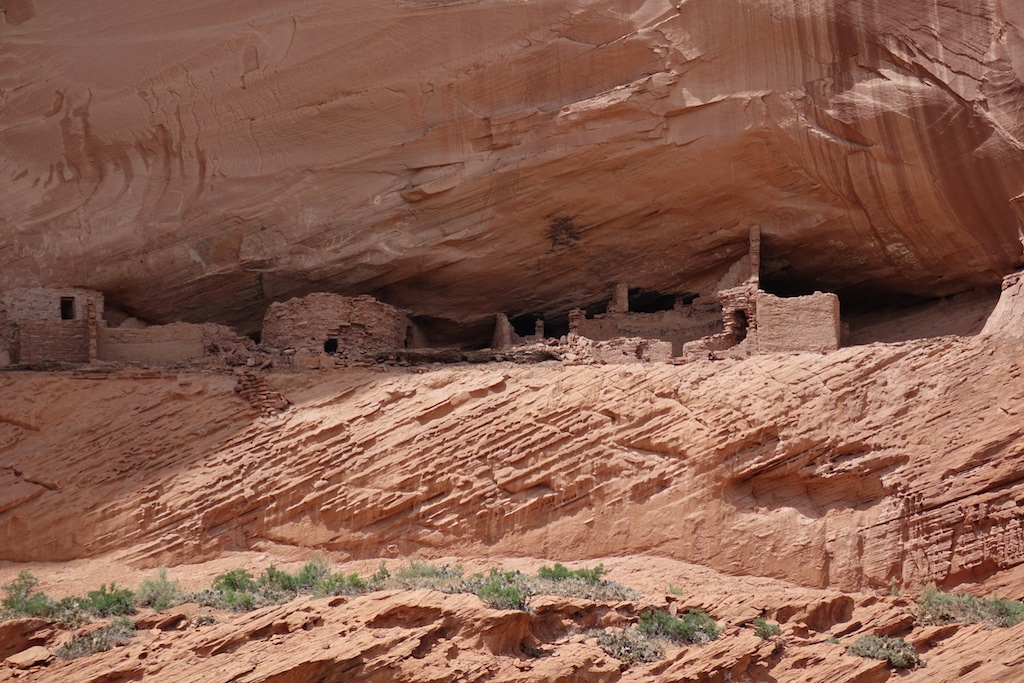 On the check-off list of great southwestern parks and monuments Canyon De Chelly always fell to the second tier of must-sees. As we've visited, on several occasions, it's far more notable neighboring attractions it was finally time to elevate it to the top of the list for a spring trip.

Though the Monument is managed by the National Park Service, visitors are restricted to viewing the canyons from the scenic drives above the rim. If you want to see the canyon floor you have to hire a Navajo guide to tour by foot, horse, or four-wheel drive. 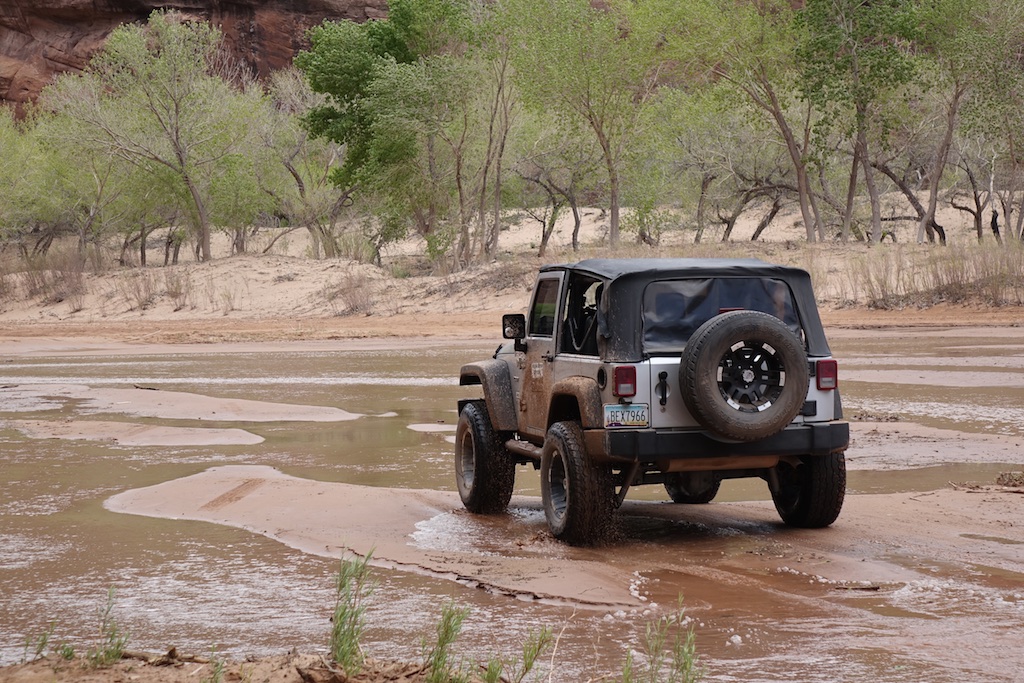 We opted for a four-wheel drive tour and Adam Teller's father, Ben, rolled up to our RVs precisely at 1 PM -- Navajo time. The four hour tour would take us several miles up the canyon for a little over three hours and worked out to about $60 dollars per person. Credit cards are accepted, but cash is definitely preferred. 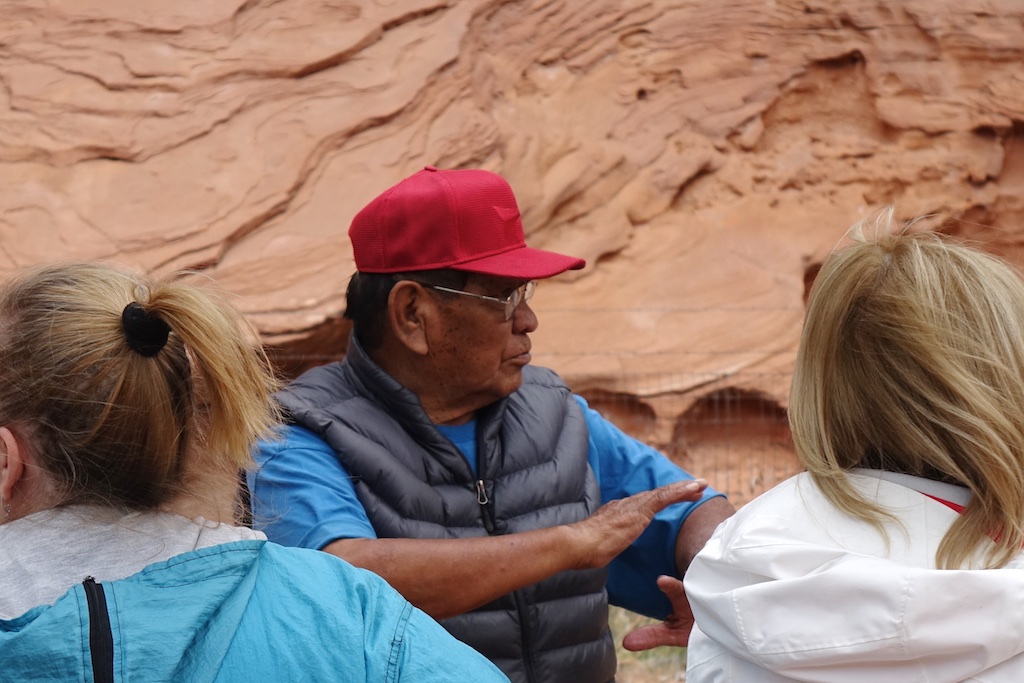 Ben Teller speaks from generations of handed down knowledge about the canyon.

The four of us filled out the 1993 Chevy Suburban which already had three other guests. The roadway sometimes is the stream bed and the tour immediately took on a air of novel adventure as the Suburban rolled across rivulets of water a few inches deep. 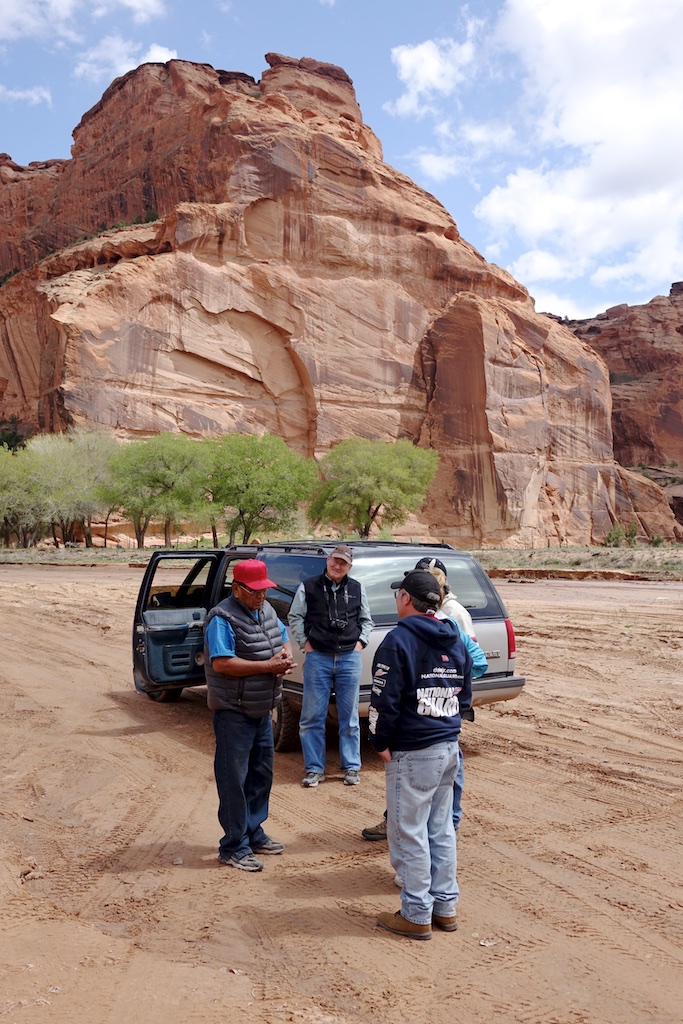 Out of the Suburban for a photo op and a history lesson.

Along the way Ben would stop, kill the engine, and we'd all step out onto the sandy ground. There he would tell us a mixture of history, legend, childhood reminiscences, and occasional dig at "those people in Washington." At 76 Ben clearly has been giving tours for a long time and still very much enjoys it. 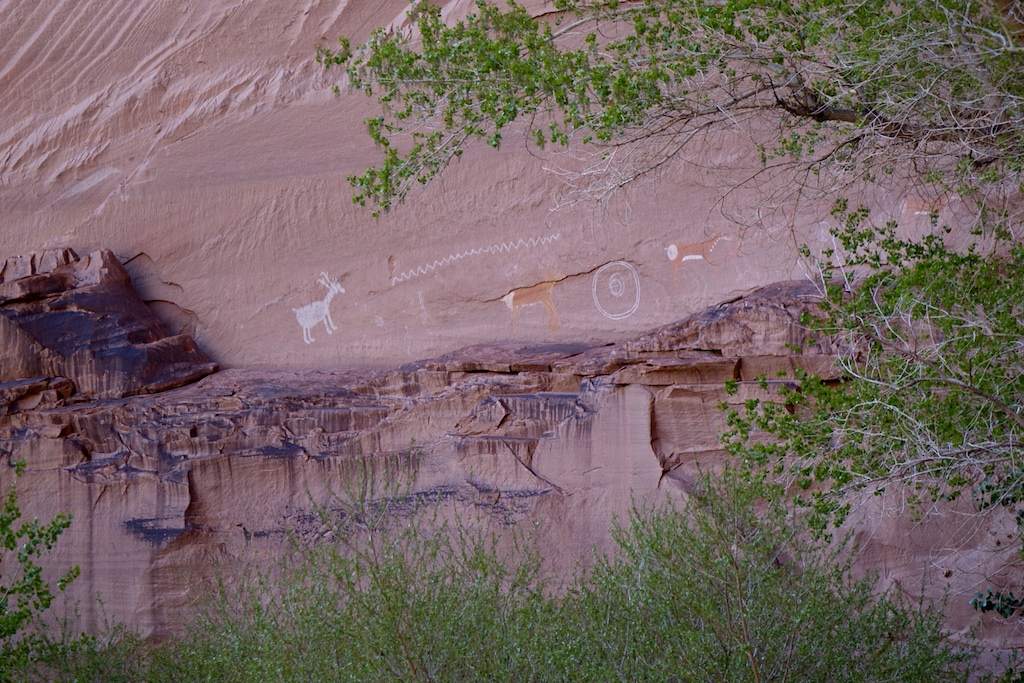 Ancient advertising: the inspiration for the family business name.

The family company, Antelope House Tours, takes it's name from the ancient painted antelope on the sandstone walls above the family's ancestral (and prime) farmland in the canyon. You might call it a vertically integrated business with Ben's son Adam managing the day to day operations including their website, and his daughter and granddaughters staffing the refreshment and native pottery booths on their property deep in the canyon.

As is true of most southwestern Native American cultures, land is owned by the women and passed down over the generations. And this would help explain the family's prime land holding deep in the canyon. For, you see, Ben's great-great grandfather was the Navajo chief Barboncito. 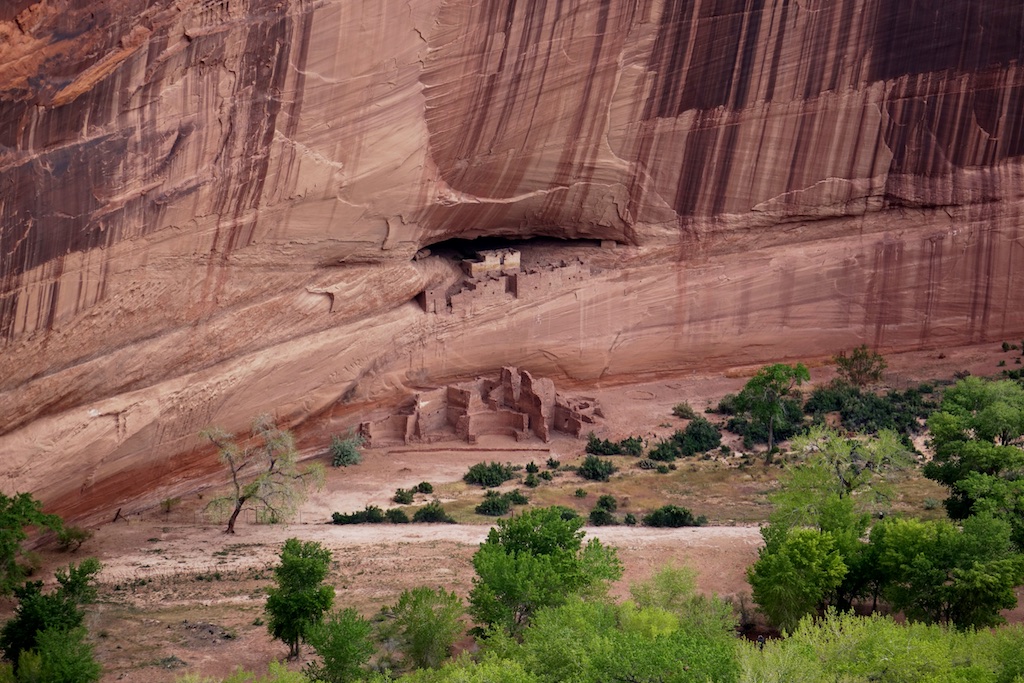 Dotted throughout the canyon were small Puebloan structures built into natural shelfs and overhangs of the sandstone walls. Pueblo culture existed from 1,300 years before Christ, and another 1,300 years after. Little is known about that civilization's decline, but clearly they were the progenitors of today's modern tribes sprinkled throughout the four corners area. According to Ben's retelling of a story, it was a Navajo tribal leader who brought the members together to invent a name for the long disappeared people and this is where the term Anasazi -- the ancient ones -- comes from.

The Suburban returned us back to our coaches at the campground and later that evening we all concurred that while we very much enjoyed the tour and the beauty of the canyon, none of us had gotten the big "wow." 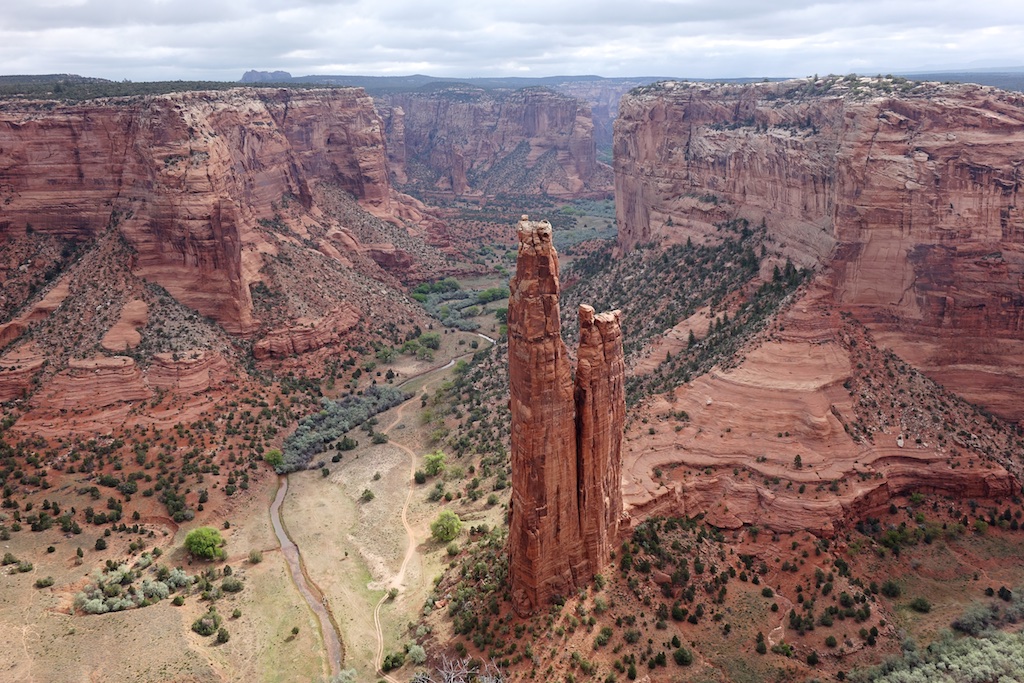 The BIG WOW looking at the Spider Tower rising above the canyon floor.

The next morning we spent a half day driving the canyon rim roads and stopping at several overlooks. When we got to the Spider Rock overlook and walked the quarter mile or so down to the prime viewing spot, then we got the big, "WOW." It was at that point that, in my own mind, I pushed Canyon De Chelly from tier two up to tier one. By any measure, the beauty of the canyons are impressive. And it made me feel happy for the Navajos that this ancestral home of inspiring cliffs, with water and fertile fields that was once lost, was regained by the people it nurtured and protected, who now stand as both its celebrants and guardians.

RV Travel Tips: Though remote, Canyon De Chelly is easily accessible by good highways. There are a couple of commercial parks with hookups in the areas, but for proximity and nice surroundings the National Park Service Cottonwood campground is the best bet. There's water, but no hook-ups and you can run a generator until mid-evening. Many of the sites are pull-throughs that can accommodate big rigs and fifth-wheels. The canyon rim roads are all navigable with motorhomes and there looped drives into the parking areas.

The park is about four miles east of the town of Chinle and there's decent grocery shopping and several gas stations who also have diesel. We found fuel prices to be competitive to larger towns. Our AT&T hotspot did a pretty reasonable job for e-mail and web surfing.

Finally, for travel planning, Canyon De Chelly is within 2-3 hours of a wonderful collection of natural and historical sites including, Mesa Verde, Monument Valley, Canyonlands and Arches. Widening the circle just a bit will encompass Lake Powell, Zion and Bryce.