In an air-conditioned RV, outfitted with satellite radio and a GPS screen, we twisted up from Lake City over Slumgullion Pass (11,530') on the way to Creede, Colorado. How different the journey was 120 years ago. Then it would take days of kidney bruising stagecoach travel to arrive at this hardscrabble mountain camp where miners blasted, scraped and milled ore for a silver fortune that burned at super nova intensity until the great panic of 1893.

During those years, it's quite possible that the fortune seeking visitors to Creede thought less of it's beautiful mountain surroundings than today's summer tourists. Creede is a town that has been ravaged by fire, flood and economic implosion, but curiously, unlike many other western ghost towns, it has refused to yield to the slow reclamation of sun blanched timbers and roof collapses under the winter weight of snow.

It is near here that Kit Carson's brother-in-law homesteaded nearby in the 1840's, where Bat Masterson (a lawman, infrequent gun fighter, gambler, and New York sports columnist!) ran a social club, and Robert Ford (Jesse James' killer) met his own violent end in his own makeshift tent saloon.

At its peak in 1891, Creede's population was over 10,000. Today the census says it's 290. But, that number increases significantly when summer arrives at 8,800' feet bringing with it seasonal cabin owners, tourists from across the globe, and a steady contingent of RVers. Today's silver is found in the flashing shadows of trout rising in the headwaters of the Rio Grande river and gold from the late September turn of the aspens.

Of all of Colorado's picturesque mining towns, Creede is one of several (including Lake City and Telluride) that takes a little extra effort to get to, but the time (5+ hours from Denver) and distance will absolutely reward the patient traveler. The most dramatic way to drive to Creede is to go south from Gunnison to Lake City and over Slumgullion Pass. While it's an easy drive in a touring coach or Class C RV, the winding, five mile, 10% grade climb up to the pass is doable with a large Class A and 5th wheeler, but may require some drivers to consider a white knuckle, post-traumatic relaxing exercise with hands slowly unwrapping around a stiff drink.

If you're not comfortable with narrow paved roads or don't have the torque or air brakes for hard mountain driving, the southern entry to town from US 160 along the Rio Grande is an equally scenic and stress free drive. 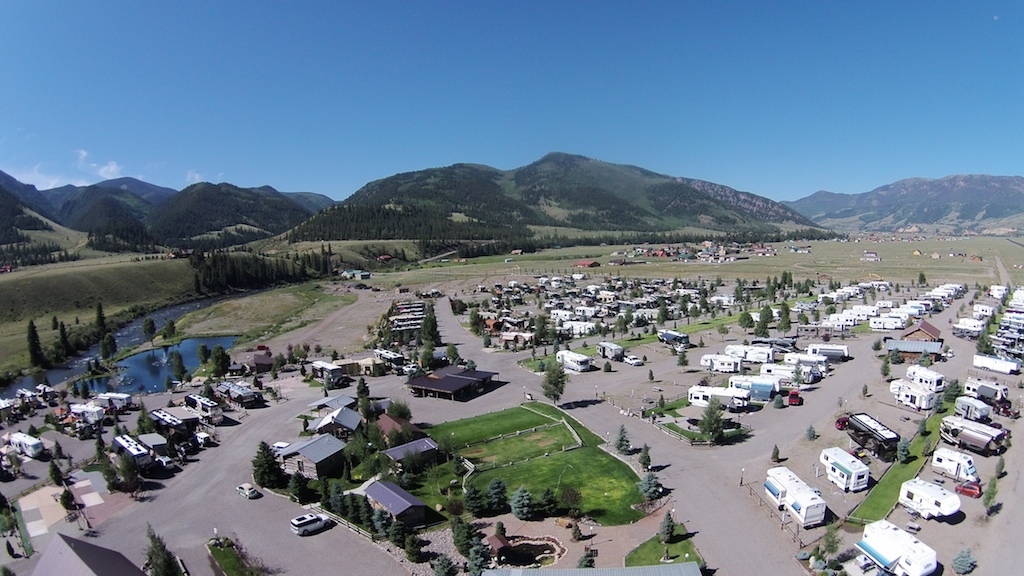 There are many good camping choices in the area from unimproved Forest Service campgrounds to several full-service RV parks. We stayed at the Mountain Views RV Park which is just a little more than a mile south of town. You can walk, pedal or ride along an ATV path from the park into town which makes this a convenient location for RVers who aren't towing a car.

Creede can serve as a great base headquarters for outdoor exploration that includes hiking, backpacking, alpine climbing, day car trips, off-roading, fishing and various festivals and community events. In the fall, it's a great place for hunting and, though much quieter in the winter, there's snowmobiling, snowshoeing, and nordic ski touring.

There's one special civic asset that separates Creede from it's mining town cousins -- the Creede Repertory Theater, which will celebrate it's 50th anniversary in 2015. Mind you, this is not some well intentioned and reasonably rehearsed community theater group. Miraculously, the theater company has grown into a full-blown, actors equity theater troupe with an impressive range and always surprising level of polish and creativity. It's two theaters are intimate and comfortable and their programming choices always highly entertaining.

The CRT is the big economic engine that draws visitors across the country to this tiny town and brings in $2 million dollars of tourism. First-time visitors are usually pretty shocked at the quality and entertainment value of the productions. "In such a small town, who knew?!"

At the end of every performance the actors scurry from the last curtain call to the front entrance of the theater. Here, in the crisp, clean mountain air, they animatedly receive the evening's patrons as they spill out onto a now quiet main street that once brimmed with the wagon dust of 19th century commerce, filled with the glow of lanterns, commotion of saloons, and stinging pungency of livestock. It's an endearing and winning ending for an evening of artistic delight in the most unlikely of places.