Polson, MT. At the intersection of Clear View Drive and Memory Lane sits a museum. It's one of those roadside stops that's announced by a small billboard on the outskirts of town that always looks rather touristy -- someplace with a small collection of something and maybe some local crafts and t-shirts for sale. And the name, "Miracle of America Museum" is more puzzling than it is enticing. 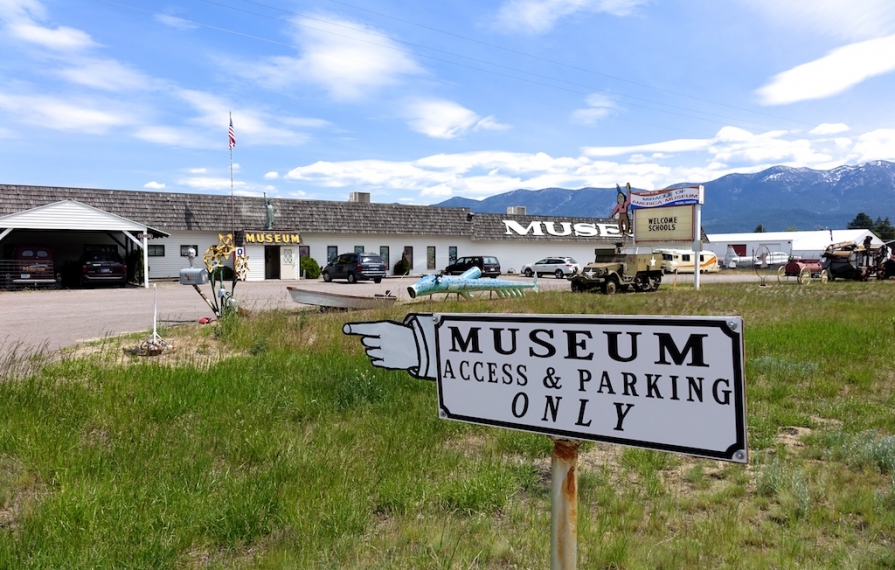 It probably wouldn't warrant a stop, but the name was curious enough to prompt a quick web search. "We spent hours there." "It's fascinating." "Take your grandparents, they'll love it." The praise on Yelp and Trip Advisor was effusive.

Apparently, there really might be something worth checking out so the next morning we rode our bikes up the street from the Eagle Nest RV Park, up a short, but steep hill to the Walmart and then about another 500 yards to the corner of Clear View Drive and Memory Lane to the Museum.

Right inside the plain wood door entrance there sat Verna, an older affable woman who when asked, "is there a rate for seniors?" didn't miss a beat in her reply, "we charge double because they stay here longer." Chuckling, we happily ponied up the $6 dollar per person charge and were handed a returnable two sided photocopied pencil sketch of the museum in a clear vinyl menu holder. Verna suggested we follow the arrows in the main building and then, rather matter-of-factly, said, "and there's 40 buildings out back, too."

"Does anyone get lost?" I asked.

"No, but I have locked some people in. We could tell because they left their map behind right where they climbed the fence to get out," she said with a wide smile. 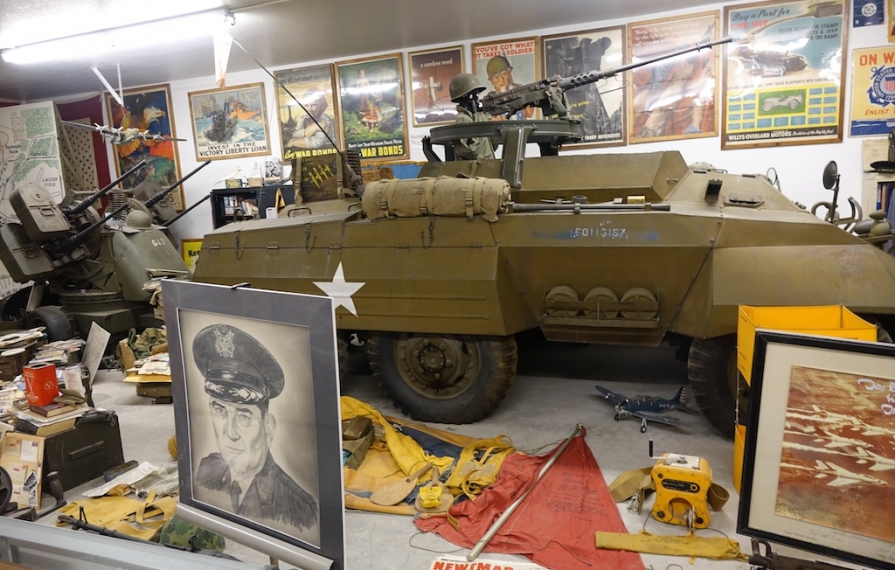 Just looking down the row of American Indian artifacts, right across the aisle with a wall of framed sheet music about songs of Montana, and further beyond to some military exhibits, the words of web posters came back to mind. . ."you'll spend hours there."

As I lingered over a dusty glass and wood wall display case holding World War I artifacts, including the top of mess kits that were clearly field engraved by their Expeditionary Force doughboys, I turned and made eye contact with a woman who had the same sense of awe and bemusement with this rambling jumble of fascinations. A few others acknowledged our chuckles with similar smiles of stunned wonderment.

I worked my way around cases of well worn toys, mostly of the first half of the 20th century, walked by a surprisingly pristine 1950's soda fountain counter, and opened the back door out onto the rest of the property dotted with buildings and artifacts. An old gas pump here, a helicopter there, a Renault 10 from the 70's, and a free standing tiny barbershop complete with rotating barber pole. It was Jed Clampett meets the Smithsonian. 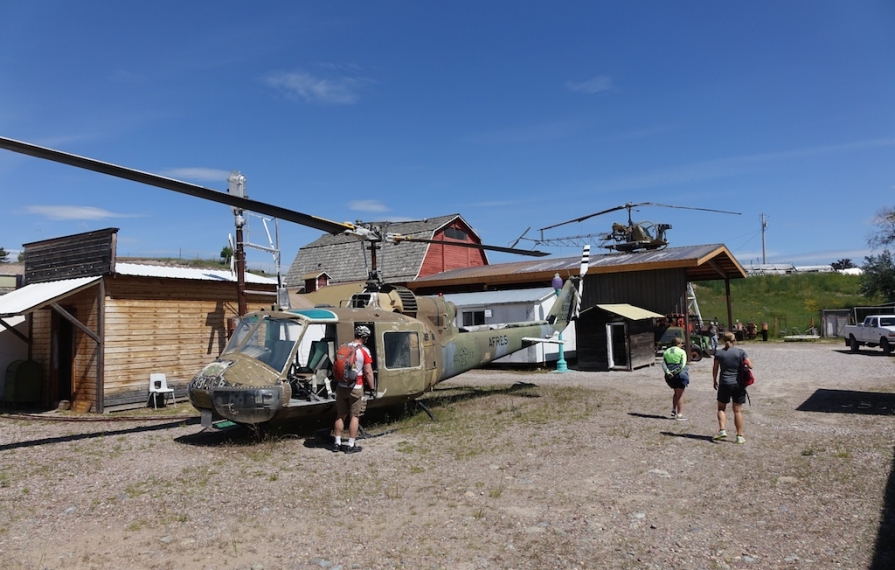 A giant forklift was firing up around the corner of a barn-like building and an older man stood by watching its operator with a supervisory eye. Though older, the man was sturdily built, wearing a floppy brimmed hat sitting atop thinning gray hair, and sporting thin framed glasses with large lenses similar to an aviator style. In front of me was Gil Mangels. The president and founder of the museum.

As he directed the forklift back to the covered shed he eagerly turned his attention to us. "Have you seen the cars yet?" he asked with the enthusiasm of a young boy eager to give you a tour of his bedroom. "I'm working on restoring an Indian (one of America's oldest and iconic motorcycles), you want to see it?

"Sure would, Gil, but first we've got to know how. . . how in the world did you collect all this stuff?"

In the warm sun of a bright Montana June morning we stood, in a dirt yard, surrounded by rusted metal and weathered wood. "I get some artists who come here just to shoot the patterns of rust," Gill said with a smile. "Let's go look at that Indian."

As we ambled towards a large maintenance type of garage, a family with two young children walked in front of us. Gil stopped the kids, hunched slightly over and kindly asked, "What's been the most favorite thing you've seen today?"

"The school," one of the two sisters shyly replied. "I liked the school."

Gil patted her and off they skipped with their parents on their heels. 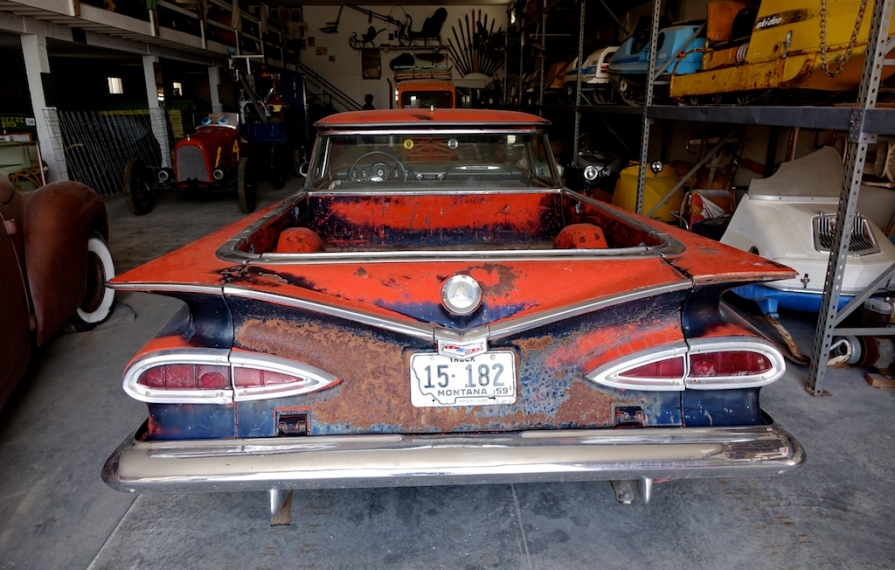 In a huge old barn there was an old wood and iron mechanical thresher the size of a small school bus. Next to it were a couple of beautifully restored steam engines of nearly equal size. High up on a wall were posters and one picture in particular (I can't recall any walls that didn't have something tacked to or hung from them).

"That's a picture of my grandparents who homesteaded here in 1911," said Gil.

Seventy-one years ago, Gil Mangels entered the world, in the same place, here in the remote Flathead Lake valley. It was a world away from the darkest days of World War II in 1943, when the tide of war was still a worrying uncertainty.

It's clear Gil has told this story many times, but there's not a trace of repetitive weariness in his voice. He was three and a half when he found his first arrowhead and was encouraged to look for others. As he grew up he kept on collecting, just about anything that piqued his fancy. As a young adult he worked on the family farm, but that didn't interest him as much, so he went to a technical school in Butte and learned machine and welding skills. And there was military service which took him to Germany. 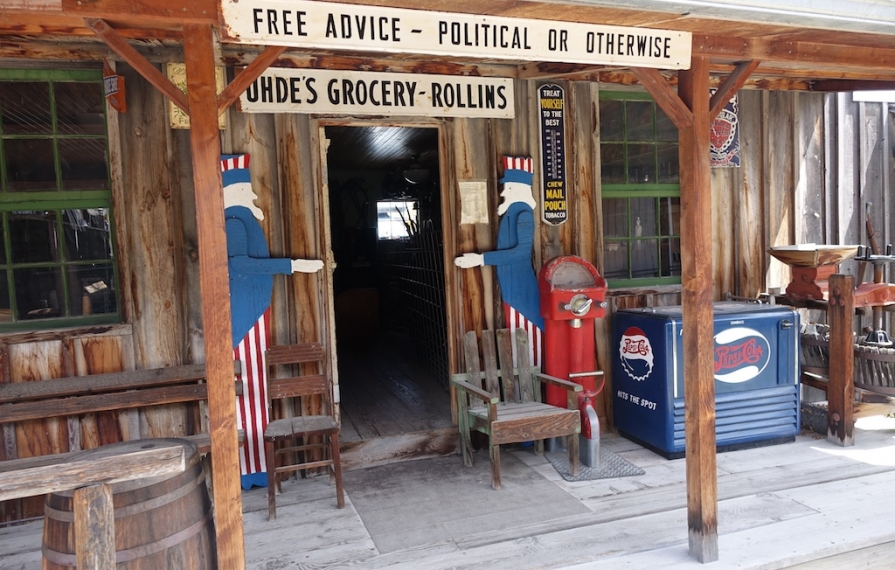 "I've been to Checkpoint Charlie in Berlin and saw how rough it was for those folks on the communist side," Gil explains. A few moments later he asks, "Did you see the displays on America? That's pretty important to me." And indeed it is. Gil's world view, shaped by post-war culture, takes a deep pride in what is aptly named the "American Miracle."

Gil's wife, Joanne, died a few years ago, but clearly supported and shared Gil's passion to acquire this kaleidoscopic compendium of American culture. "We'd take a lot of trips and made sure we never came home empty handed. We never had a lot of money so I got pretty good about simply asking people if they'd give us their stuff." Certainly it gives meaning to the old adage that "one man's trash is another man's treasure." But, in this case, there truly are some sparkling gems among the dross.

Together Gil and Joanne raised three children and formed the non-profit museum in 1981. His children no longer live in the area, but he's hoping that a grandson might return one day and, "when he's finished raising a family," continue the legacy. He's already helped with the web site. 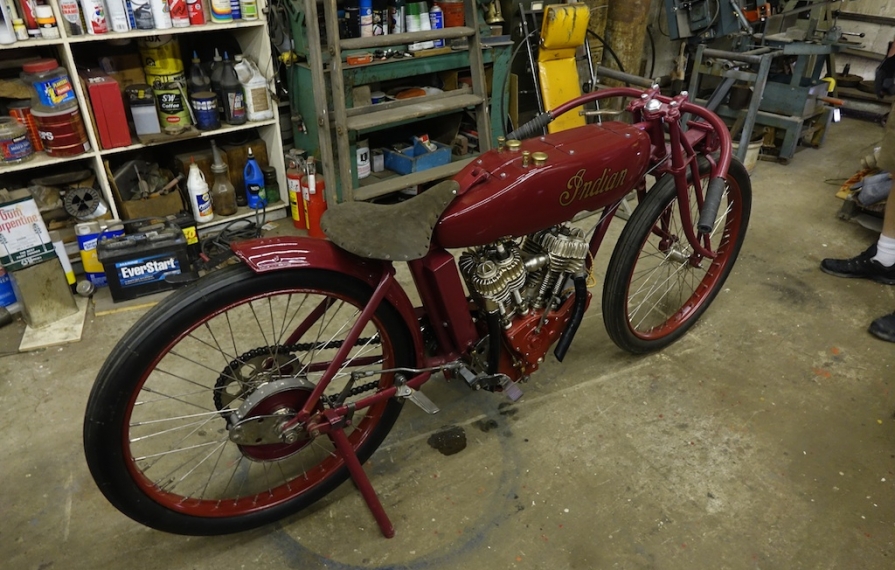 We're now far back in the machine shop which, as a non-display area, rises to an even higher level of dishevelment. Almost theatrically, as if in a mechanical forest clearing surrounded by thickets of wrenches and dusty drill presses, the Indian sits. It's been nearly restored to its original form and even in the dim fluorescent light seems to burn a warm red. Gil clearly wants to show his latest prize off and takes a couple of hard pushes at the rear wheel in an attempt to bring the bike to life. It almost catches, but his sore rotator cuffs limit his ability to get the dully polished engine to fire.

Gil looks at his watch and tells us it's about time for him to relieve Verna at the front desk. As we shake goodbye the last impression I get is of Gil's massive and thick hands. They were much smaller when that first arrowhead was picked up, and perhaps much smoother before a life of farming and mechanical work.

As Gil walked back to the museum's front desk I felt almost dumbstruck. In the space of a couple hours I had taken a journey from bemused cynicism to deep admiration. By his own admission Gil Mangels has never been rich, but that's only one measurement of wealth. Around this genial son of the Montana soil grew a singularly unique view of the American story. And, through one man's eyes, gets a fascinating telling. It is from a deeply driven love of country, family and God that Gil Mangels has built his Miracle of America Museum, and true to the spirit of American inventiveness, that, in and of itself, is miraculous.