Hiking with Kayaks in Alaska

Staring out at the early morning flurry of activity moving about in the harbor in Homer, AK, I couldn't help but reflect on the strange series of events that had led us to this moment. Just two days ago, a curly headed stranger bounded up to us in a laundry mat in Homer and introduced himself as a fellow kayaker and asked if we wanted to accompany him on a remote and somewhat obscure adventure. After a brief conversation, some online research about the logistics of our planned route, and a few followup emails, we agreed to accompany our new acquaintance, Randy, into the wilds of Alaska. 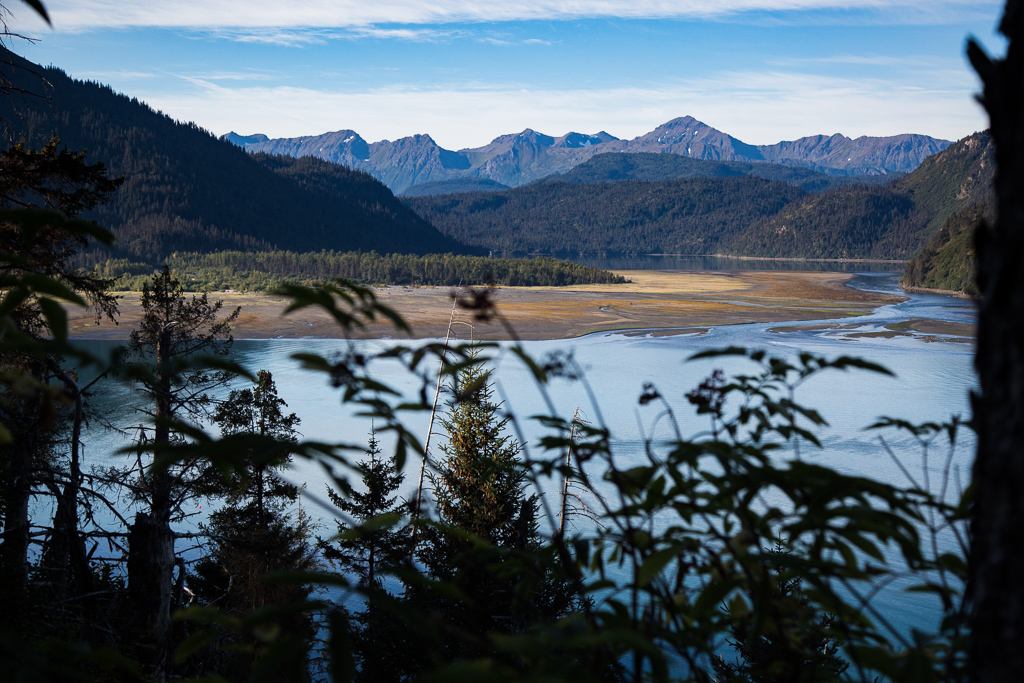 The view above Halibut Cove was worth the journey in it's own right, but was just the launching point of our adventure.

Two days later, just as the sun peeked over the horizon, we found ourselves in Randy's company once again as we loaded our kayaks and gear onto a water taxi, a small cargo boat, that would take us across Katchemak Bay to the starting point of our adventure. Before the sun even cleared the horizon we were all aboard and moving through the maze of boats lining the harbor docks. We passed by vessels of all shapes and sizes, mostly working boats for fishing or cargo transport. The crab boats (from the TV show Deadliest Catch) and Coast Guard ships stood sentry at the mouth of the harbor and marked our transition from the comforts of Homer into the wild that awaited us on the far side of Katchemak Bay. 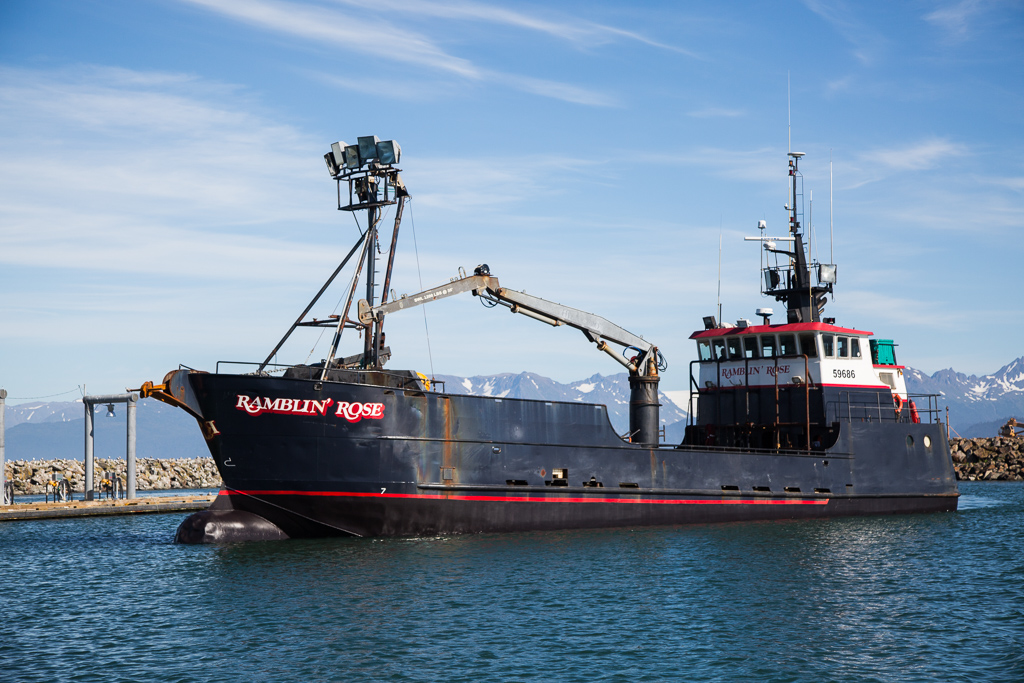 The Ramblin' Rose, one of the crab boats in the Discovery Channel's Deadliest Catch, stands sentry at the mouth of the harbor in Homer, AK.

As we left the safety of the harbor, the water sparkled like diamonds in the early morning light, and we frequently spotted the water spouts of humpback whales rising in the distance. The crisp morning air, while brisk, wasn't enough to keep us quarantined inside the cabin of the boat. Instead we rode on the front deck alongside our kayaks, the cold morning air air tinting our cheeks a rosy shade of red. After about 45 minutes, we arrived in Halibut Cove where our captain skillfully ran us aground on the sandy beach, pausing only long enough for us to scramble ashore and offload our gear before returning to the harbor to pick up another load of cargo. As I watched our lifeline to civilization disappear over the horizon, I realized that ready or not, we had just been deposited smack into the middle of yet another incredible adventure. 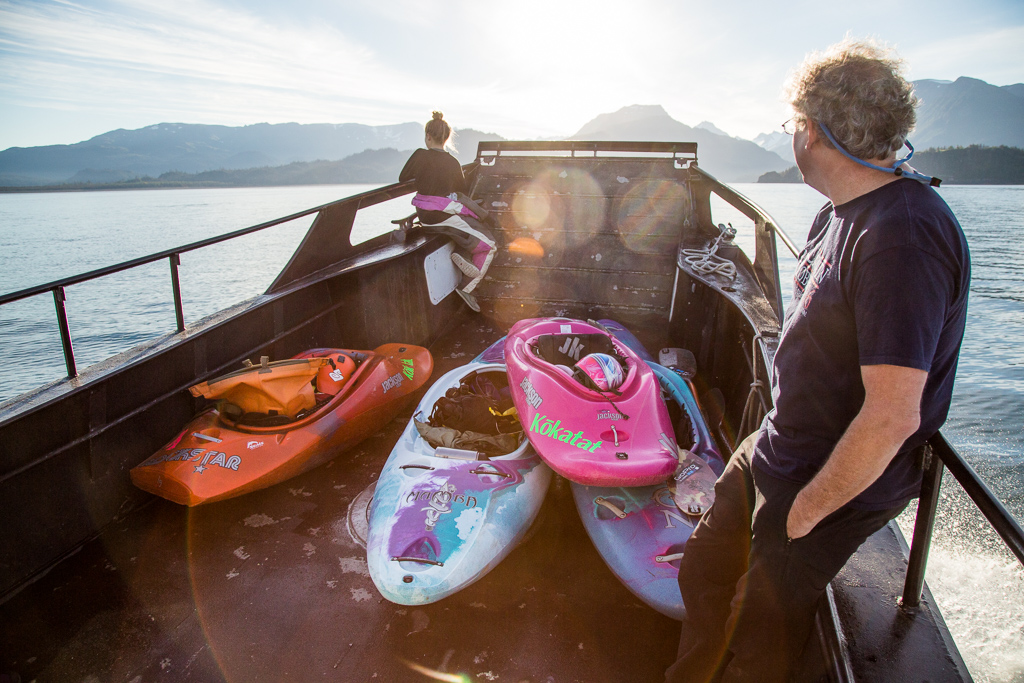 Abby and Randy enjoying the brisk morning air as we cross the Katchemak Bay en route to Halibut Cove.

The initial leg of our journey was simple enough: a two mile hike, with kayaks in tow, up a rough trail with an 800 foot gain in elevation. We exited the beach by climbing several flights of stairs that led to a steep trail up seemingly endless switchbacks. We picked our way over and around gnarled roots that twisted across the trail and at times forced us through the thick underbrush that lined our path. Randy kept us entertained with one fascinating story after another of his incredible experiences as a guide in the arctic tundra in Alaska. After hearing a tale of a close encounter with a bear, I kept a watchful eye on the dense thickets of blackberry bushes that lined the trail. After a steady mile and a half uphill we made it to the apex of the trail and began our descent into a valley filled with the golden foliage of fall. We clambered another half mile over a broad, rocky trail to the edge of a glacial fed lake and the second phase of our adventure. 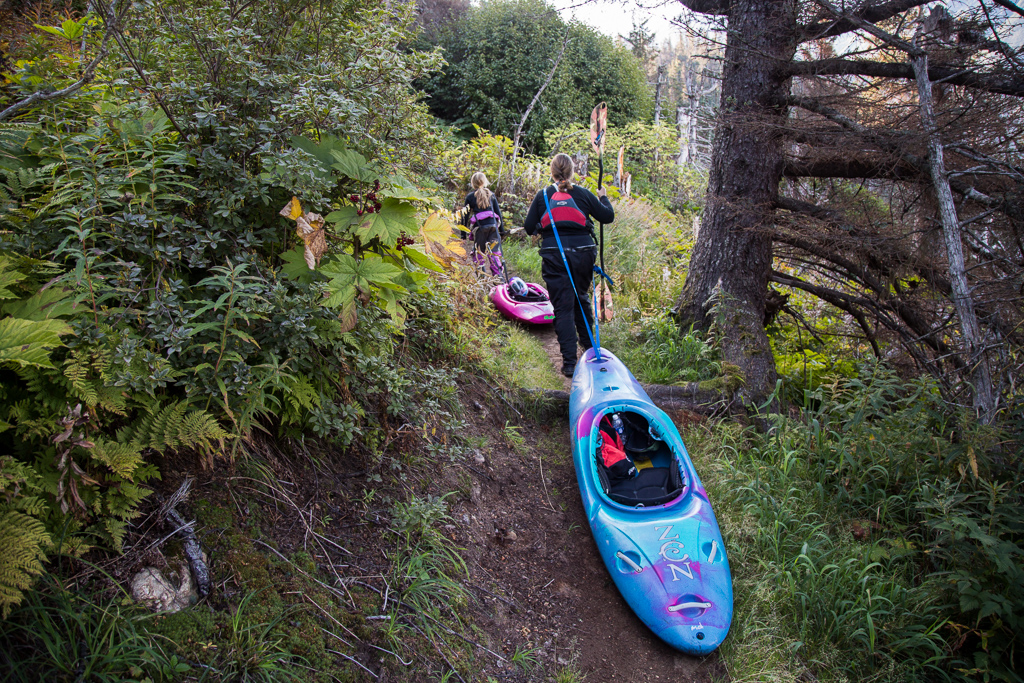 The trail was rugged and steep, but we persevered over two miles and up 800 feet of elevation gain to reach Grewingk Glacier Lake.

With a quick wardrobe change, we morphed from hikers to kayakers and set out into the arctic waters of the Grewingk Glacier Lake. While the paddling was familiar, weaving through icebergs strewn across the lake by a calving glacier, was a first. We proceeded with caution, giving the larger ice sculptures a wide berth, but couldn't resist nudging the smaller ones with our kayaks. We estimated it would take about 20 minutes to traverse the lake and reach the toe of the Grewingk Glacier, but after an hour and a half of paddling we realized we had grossly underestimated the magnitude of our surroundings. We picked up the pace and eventually made it to the massive river of ice, cascading down from the mountains above. We had finally reached the source of our adventure: the headwaters of Grewingk Creek. Although we were tired from trudging uphill carrying our kayaks, and the battle against the wind and current as we crossed the lake, we had only covered 1/3 of our planned route. After taking in the intricate detail of the glacier as it spilled into the lake, we retraced our route back through the icebergs across the lake, carefully scanning the perimeter on the right shoreline for a small break in the the trees that marked the entrance to the final phase of our adventure, a six mile stretch of whitewater that would lead us all the way back down to the saline waters of the Katchemak Bay. 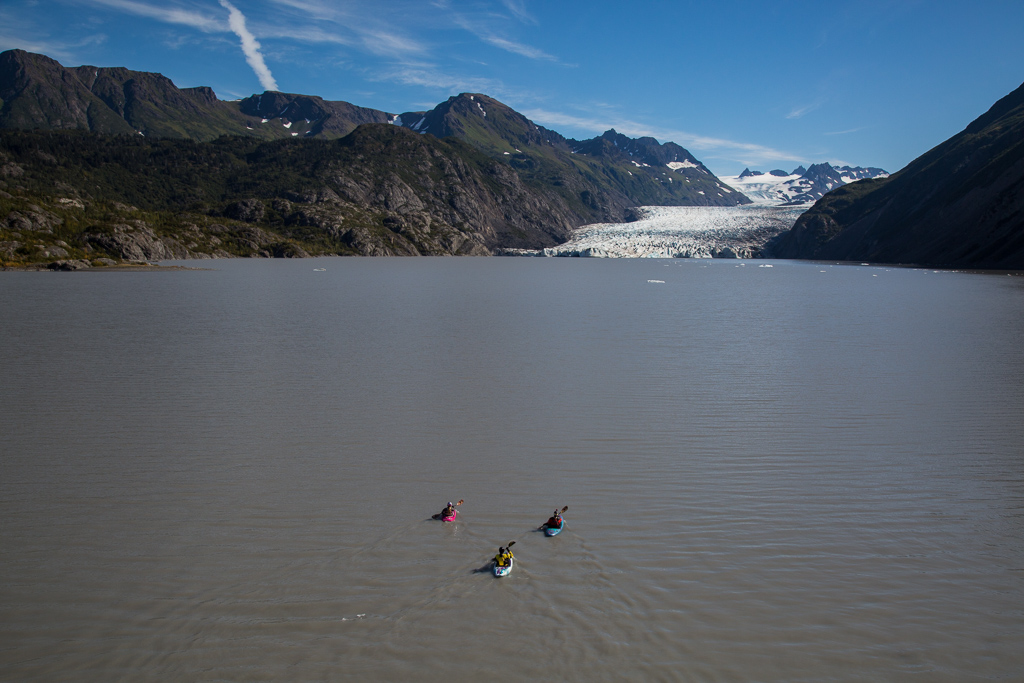 Setting out on the lake, we never imagined that it would take over an hour and a half to reach the glacier.

Although it was well camouflaged by the golden foliage lining the shore, the tiny gap in the trees became more and more pronounced as we approached the outlet of the lake. Amid whoops of joy, we transitioned from flat to flow, dropping into the roller coaster of whitewater that would lead us back to civilization. We leapfrogged our way down the frothy ribbon of pewter colored water, splashing and laughing our way around rocks and waves. Long before we were ready, the character of the water transitioned from a raucous flume into a meandering delta signifying the end of our adventure. As we paddled out into the bay, sea otters served as pilot ships leading us to the location where we were scheduled to rendezvous with our water taxi. We arrived with almost a half hour to spare and set about exploring the abundant sea life that inhabited the tidal pools at our extraction point. 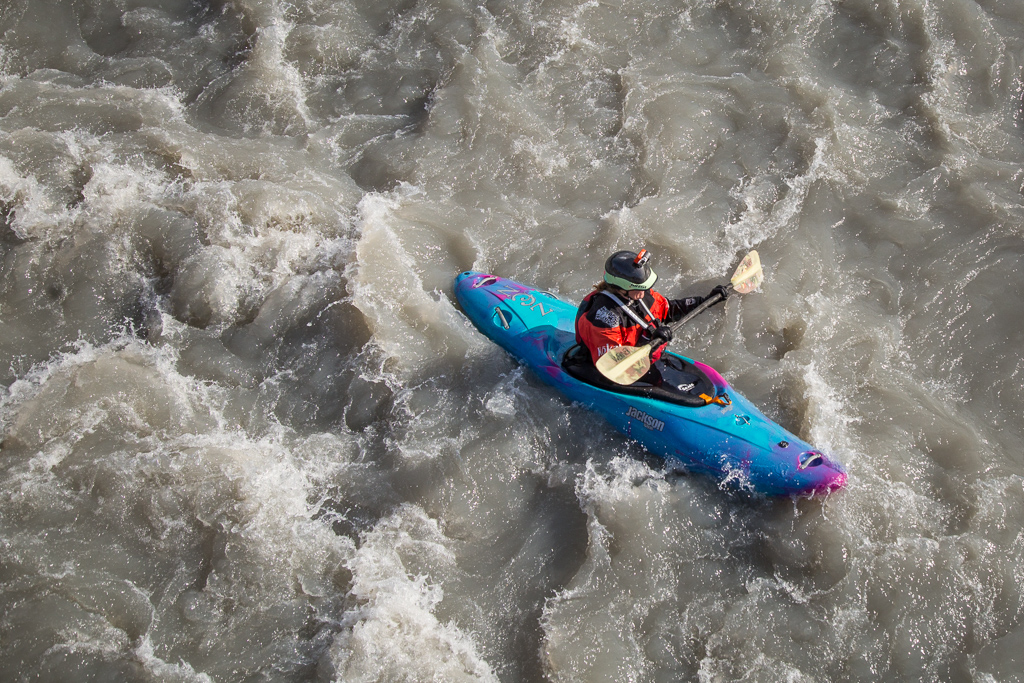 The water was filled with glacial till giving it the appearance of molten pewter streaming down the riverbed.

Out of the fog that had settled across the Homer Spit, our water taxi emerged: first as a tiny black speck in an endless sea of gray but growing larger by the minute. As the boat approached our beach, the adrenaline of adventure was replaced with the fatigue that often accompanies a long day well-spent in the wild. We scrambled aboard the small boat and once again took our positions in the open air of the cargo hold. This time instead of the excited chatter of anticipation echoing above the roar of the engine, a silent blanket of contentment enveloped us. We each sat in silence reflecting on our day and all the marvels we had experienced. 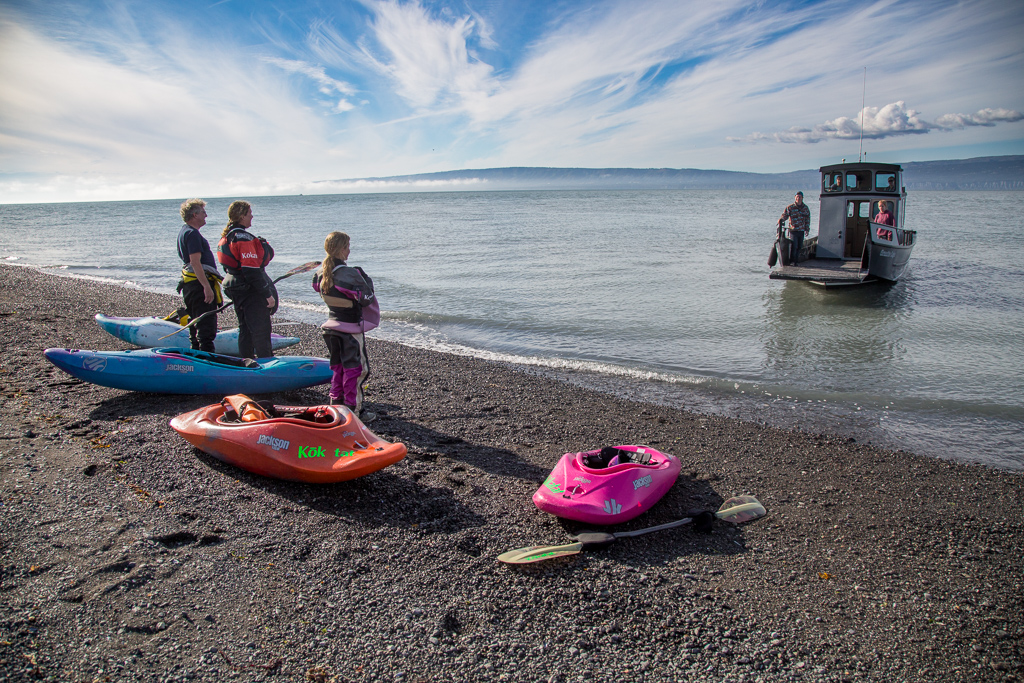 The Homer harbor was blanketed with a thick fog leaving us wondering if our water taxi would make it out to pick us up. Thankfully our chariot arrived right on time.

As we unloaded our kayaks onto the docks of the harbor, I couldn't help but think about all the changes we had experienced over the past 48 hours: the dramatic shift of environments as we moved from one ecosystem to the next; the diversity of experiences we encountered along the trail, the river and the sea; and in our increased confidence and comfort in the backcountry of Alaska. As for the curly headed stranger that wandered into our lives and inspired us to set out on this incredible adventure, well that is my favorite part of our life on the road. The transition from acquaintance to friend that has happened so frequently along our journey as road warriors, becomes yet another critical fiber that when woven together over time creates the brilliant tapestry of our lives.