America is a land of invention, but also reinvention. We relocate and borrow and celebrate. Case in point--the tiny U.S. hamlets that borrow their names from grandiose global metropolises. Such was the focus of my travel memoir Small World. I passed through various tiny towns named after famed international cities--London (Wisconsin) and Paris (Kentucky), Athens (New York) and Rome (Oregon), Cairo (Illinois) and Jerusalem (Arkansas).

In some of these, you'd be hard-pressed to find evidence of the culture that spawned the name. Calcutta (West Virginia) is a little Appalachian holler filled with a couple-dozen residents, most of them from the same family. And Mecca (California) is populated mostly by the families of migrant workers from Mexico. In addition, many of the names have been... Americanized. If, for instance, you follow a lonely South Dakota highway into the town of Vienna, you won't be in "Vee-yenna." You'll be in "Vah-yenna." Which conjures up an image of Sigmund Freud in overalls. Then again, what do you expect from a country that borrowed football from the rest of the world and called it "soccer?"

Still, there are a good many big-named small towns that offer something special--and usually something entirely unrelated to the name. Here are eight small world wonders:

Not all roads lead to Rome. But Oregon Route 95 does, slicing through the southeastern corner of the state, a part of Oregon that began in the 1890s as an encampment of Basque sheepherders. Today, it is dominated by sprawling cattle ranches, meaning folks are neighbors only in the relative sense of the word. But just after the sign for "Rome" along the empty road is another sign, a lesson in either relativity or sarcasm. It says simply, "Congestion." There are barely two-dozen residents.

One river leads to Rome, too. The Owyhee River has been called the loneliest river in America due to its isolated, back-of-beyond location. Although it is a whitewater destination in springtime, it is a relatively undiscovered jewel, a wonderland of hot springs, petrified trees, towering spires and sheer-walled canyons. In four hundred miles from the Owyhee's headwaters in northern Nevada to its confluence with the Snake River on the Oregon-Idaho border, Rome is the only community it passes. Where the lonely river and the remote road intersect, there sits Rome Station, a tiny cafe (and occasional RV campground) that serves as the only commercial establishment in this hiccup of a hamlet.

So how did Rome get its name? From the 100-foot-high, fossil-bearing, clay formations just 1.5 miles west of Rome Station. These strange white bluffs reminded some of ancient ruins. So they are the Rome Cliffs--otherwise known as the "Pillars of Rome." 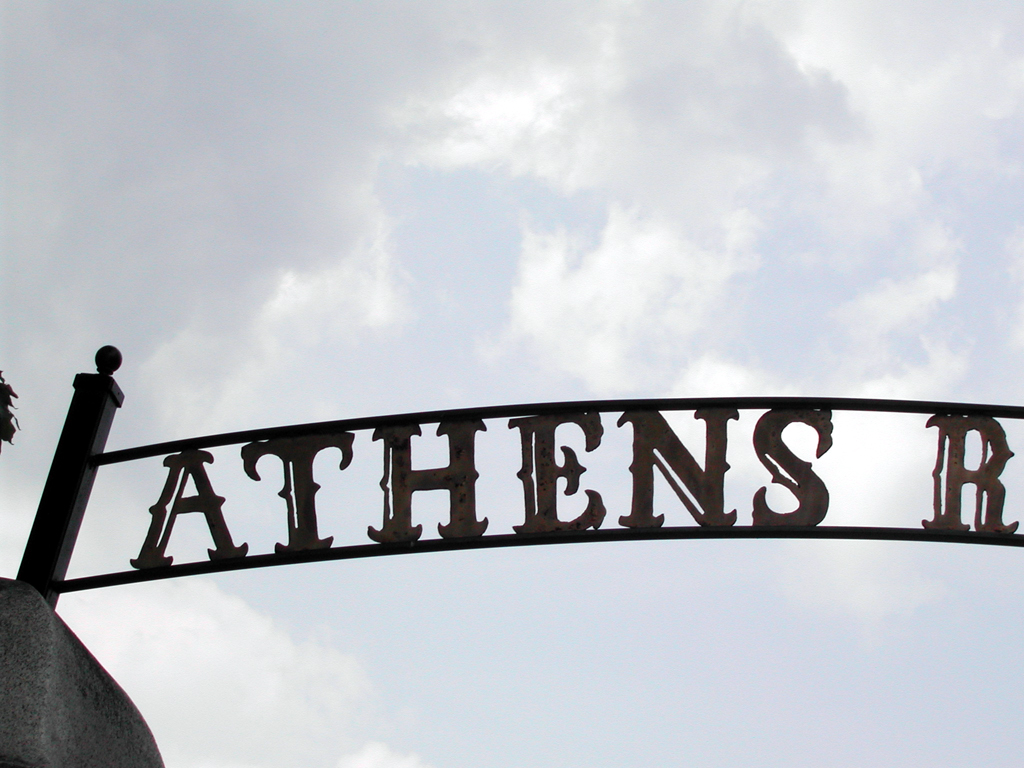 In War of the Worlds, the 2005 Spielberg-and-Cruise action flick, Athens--a town of about 4,000 on the West Bank of the Hudson River--is shown being destroyed by Martian tripods. A flaming train passes by. A ferry overturns. The visitors from outer space win.

Then again, anyone wins by visiting the real-life Hudson Valley. In fact, people make pilgrimages to celebrate the landscape. What ancient Athens was to philosophers and epic poets, the Athens area in New York was--and is--to painters. Just across the river from Athens sits Olana, a villa set on a 250-acre estate that was once the home of Fredric Church, one of the most successful American artists of the 19th century. He was the most illustrious pupil of Thomas Cole, who camped in the valley for several days in 1825 and sketched the scenery. Generations of artists followed suit, drawn by the grandeur of the sweeping river valley backed by the Catskill Mountains, and they formed the first native painting movement in America, which came to be called the Hudson River School. It represented the first great appreciation of American beauty and the notion that a reverent sense of place can be enlightening. Which sounds a lot like a good road trip. 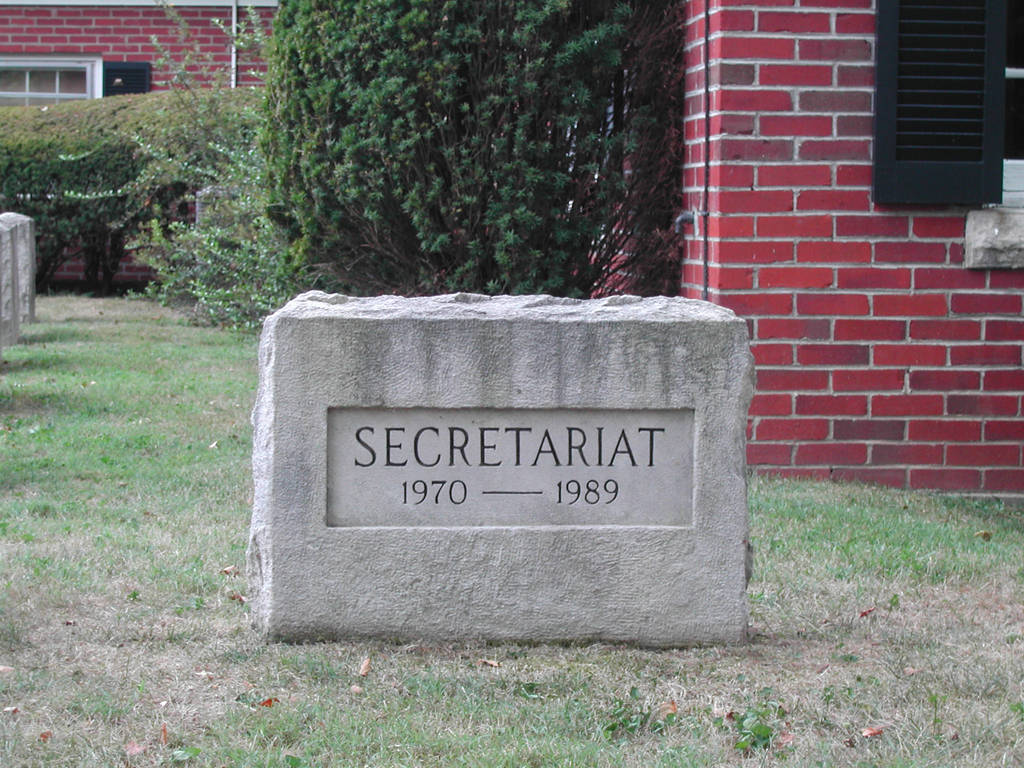 Kentucky's Paris (the seat of Bourbon County) and France's Paris have more in common than you might think. One Paris has the River Seine; the other is set along the Licking River. Paris, France, has heaps of history, of course. But so does Paris, Kentucky. George Washington actually did sleep at the Duncan Tavern, which was the first building in the state constructed of stone--back in the 18th century. Kentucky's version of the Cathedral of Notre Dame--the Cane Ridge Meeting House--is a 30-by-50-foot church constructed from blue ash logs and now enclosed inside a limestone superstructure for protection. It is a place of both religious significance (dating back to the Great Revival of 1801) and architectural awe (touted as "the largest one-room log structure in the United States").

Like the streets radiating from the Arc de Triomphe, quiet roads fan out in all directions from Paris, winding their way through the countryside, past stately trees and verdant pastures. What one notices most, however, are the fences, miles and miles of them, made of wood or stone, undulating with the hills. These are the world famous horse farms of the Bluegrass, and none is more renowned than the 3,000-acre spread a mile south of town, just past the local version of the Eiffel Tower (a giant water tower that shouts "Paris"). Claiborne Farm, where half of history's 12 Triple Crown horses have been sired, has been called a living Hall of Fame. 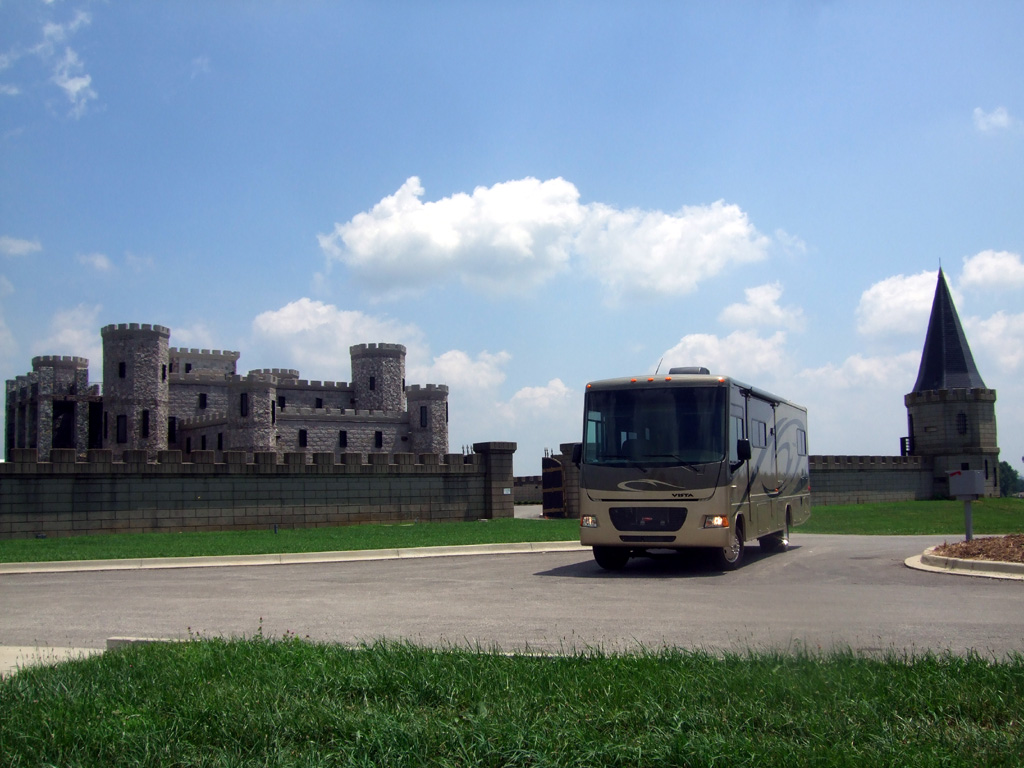 Located less than 30 miles from the city of Paris (each of them resting on either side of Lexington, amid Kentucky's beautiful Bluegrass region), Versailles is the seat of Woodford County. It is a bustling little city of some 9,000 people, and it is, indeed, named after the French Versailles. In fact, there is a palace of sorts in Kentucky's version, too--more of a castle, actually.

It appears atop a hill along busy U.S. 60. A dozen turrets. Four corner towers. Twelve-foot walls. Apparently, a coal magnate built it for his wife in the early 1970s -- a 32-room, 10,400-square-foot residence inside the stone walls. But they divorced before it was complete. Palace intrigue, one supposes. For many years, it was vacant, a mysterious honest-to-goodness castle in the Bluegrass. But today it serves as the setting for CastlePost--a luxury inn featuring ten stately guest rooms, a ballroom, tennis courts, basketball courts, and a billiard room.

Still, castle or not, the locals pronounce the town "Ver-sales." 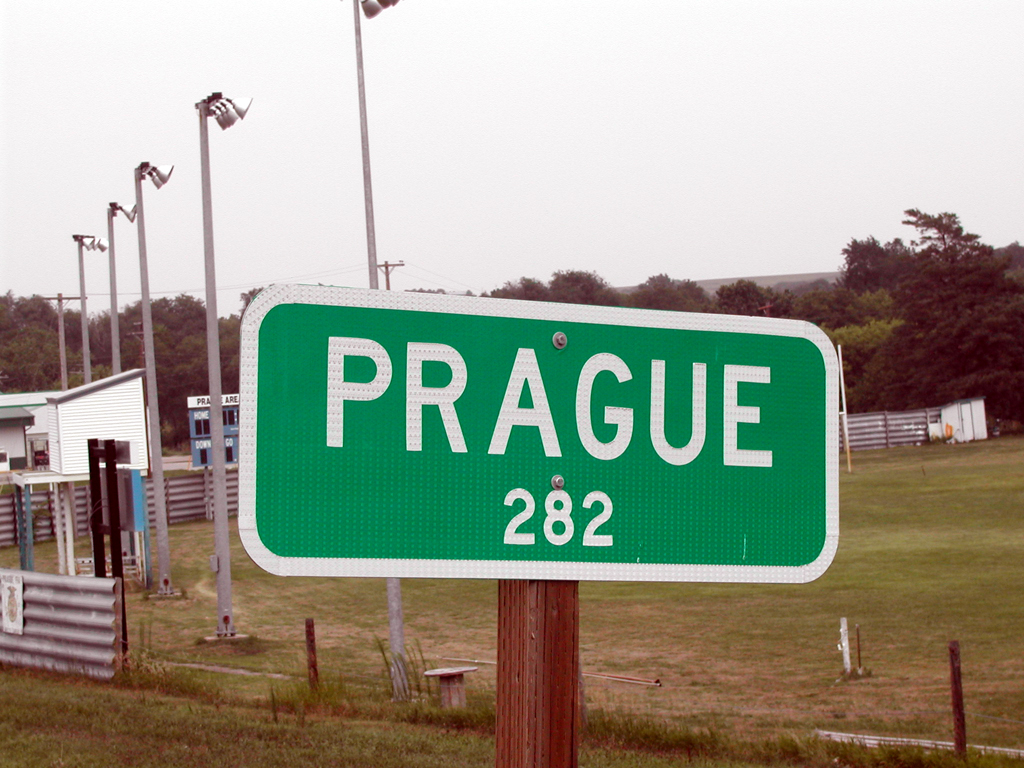 In the 1880s, thousands of immigrants arrived in eastern Nebraska, most of them from the Czech province of Bohemia. The region became known, perhaps with a wry grin, as the Bohemian Alps.

Head into eastern Nebraska, a stone's throw from the city of Wahoo. There you'll find Prague (population 303), a Czech-American community, although the folks there pronounce their town to rhyme with "vague."

Wander through town, and you'll find streets with names like Elba, Waldstein, Lusatia, Danube. You might spot posters touting a polka dance or the Prague Czech Brass Band. At the Kolac Korner Cafe, you can order the Czech pastry from which it took its name. But don't order the large. This town knows large. In 1987, during Prague's centennial, the townsfolk trucked in 250 gallons of cherry pie filling and 700 pounds of dough and constructed a giant pastry measuring nearly fifteen feet in diameter and weighing more than 2,600 pounds. When the folks at the Guinness Book of World Records informed them that, unfortunately, there was nothing with which to compare the feat, they simply cooked up another, slightly larger one five years later. So now the sign on the outskirts of town says, "WELCOME TO PRAGUE: HOME OF THE WORLD'S LARGEST KOLACH." 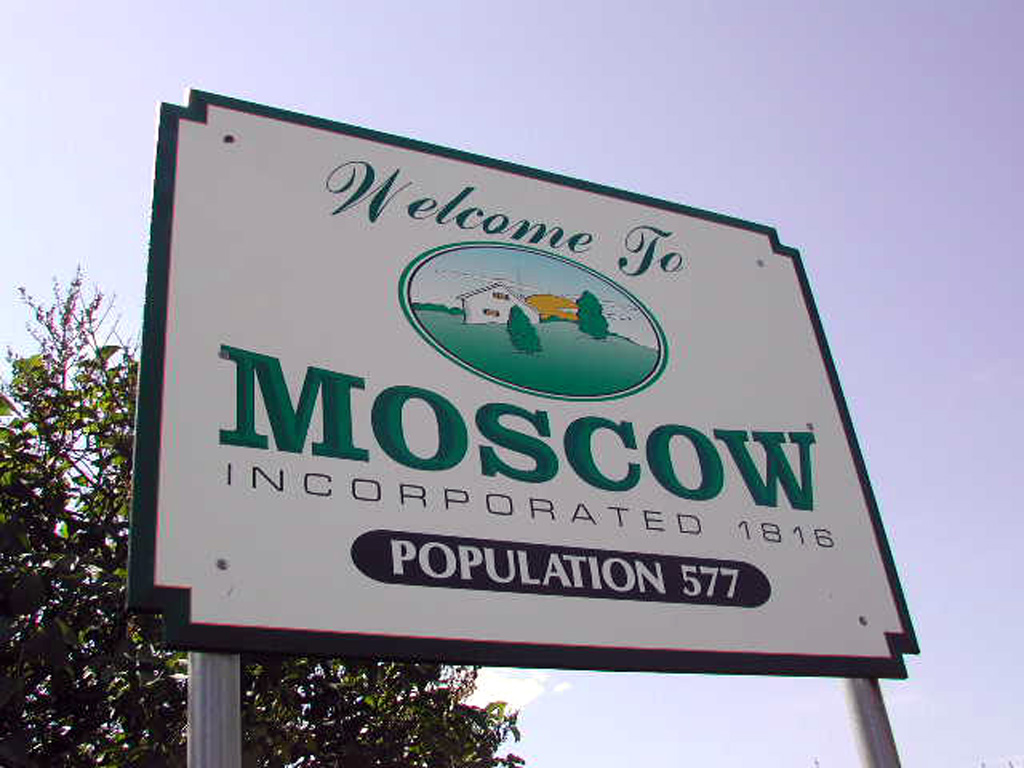 This little Maine hamlet of barely 600 residents celebrates its bicentennial in January 2016. Its 200th birthday bash is scheduled to include antique displays, a time capsule, a "Taste of the Past" dinner buffet, a community chorus performance, and an official Miss Moscow Contest. Oh, and cake and ice cream to top it off. So yes, a place called Moscow will be oozing Americana.

Moscow is bounded by the Kennebec River and Wyman Lake, which was formed by Wyman Dam, constructed not long after the town's centennial. The top of the dam is nearly 3,000 feet long, and the artificial lake that it created is twelve miles long. But the long and short of it is this: Moscow proudly owns one of the finest of all town slogans: "Best Town by a Dam Site." 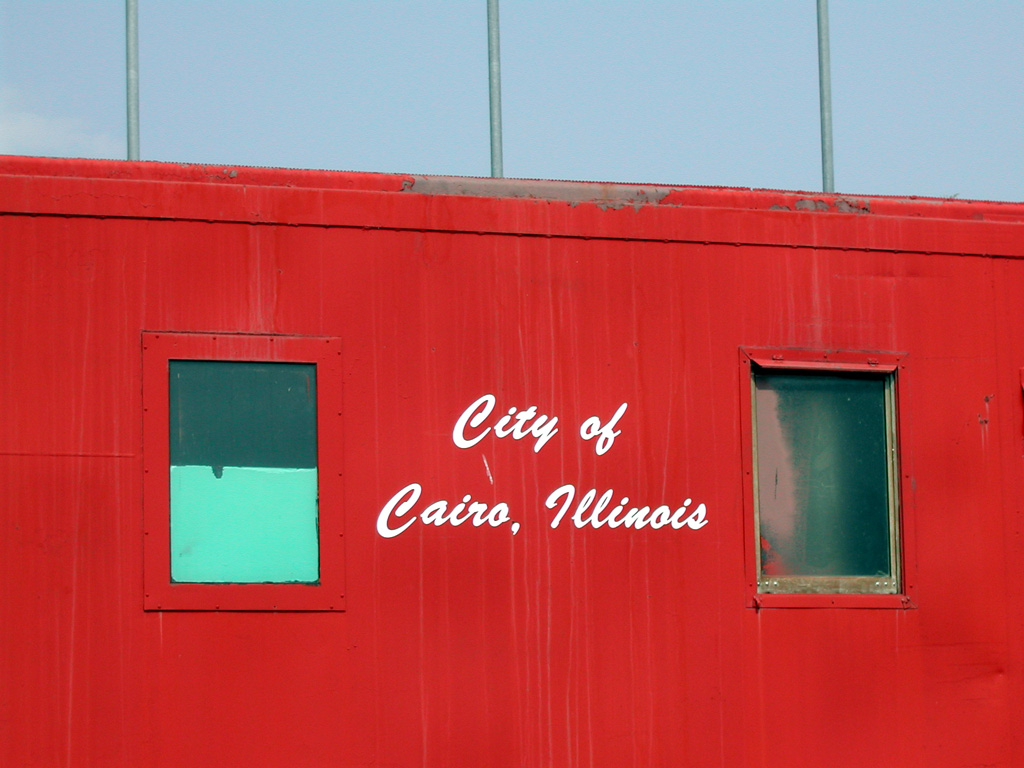 Travel toward the southern tip of Illinois, through a region known as Little Egypt, to a place where a couple of Nile-like rivers (the Mississippi and the Ohio) join waters. What you'll find there is a cautionary tale. Cairo, Illinois, was essentially killed by racial conflict--what The New York Times described, in 1973, as "persistent, systematic, stubborn racial violence." The conflict essentially resulted in "white flight," and the city's population dwindled from a high of 15,000-plus to below 3,000. Thus the center of town is dominated by abandoned buildings and empty storefronts.

But there is a great natural metaphor at the southern tip of Cairo -- that is, at the southern tip of the southernmost point in Illinois. At Fort Defiance Park, where once there were cannons, there now stands a two-story tower, the Boatmen's Memorial, dedicated to those who lost their lives on the water. The top floor offers a terrific view of the confluence of those two great rivers.

By this point, the blue Ohio River, having emphatically separated the Midwest from the South, has traveled nearly one thousand miles from Pittsburgh. The muddy brown Mississippi, in the process of cleaving the nation in two, has journeyed nearly the same distance from Minnesota's Lake Itasca. For about a half-mile or so, the two rivers struggle to merge, commingling in ebbs and flows. But eventually, the two become one, and the river continues its journey. Of course, there's still a long way to go. 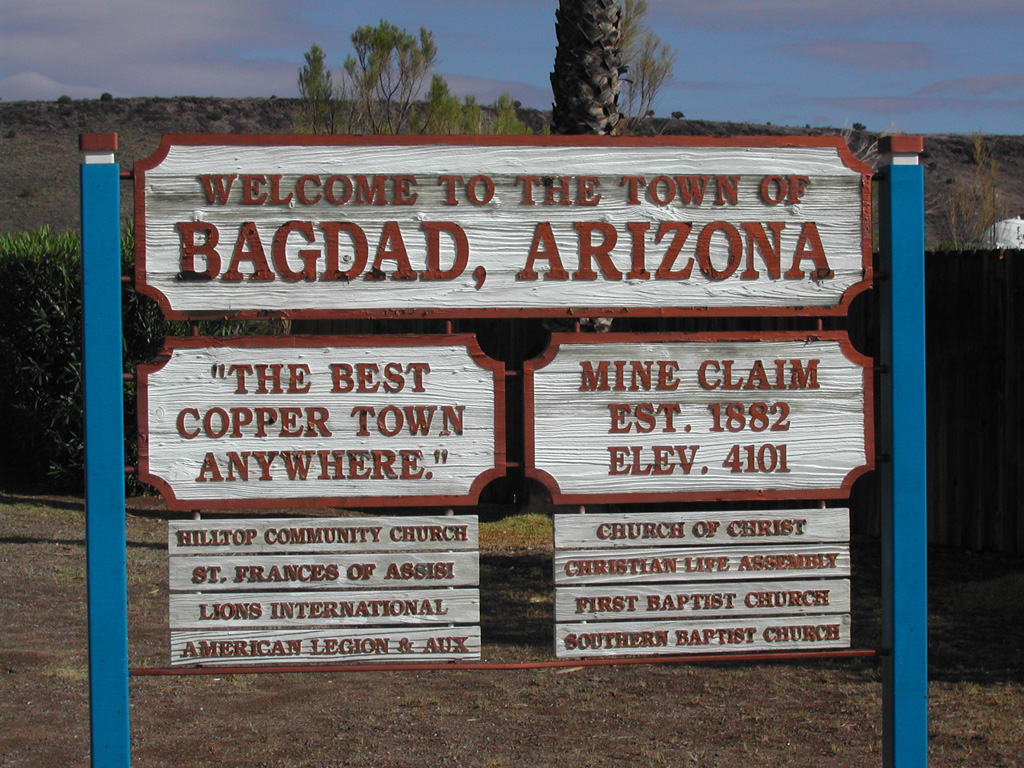 Travelers don't just happen upon Bagdad, which is roughly equidistant from Kingman, Flagstaff and Phoenix. The residents joke that other towns have through traffic, but Bagdad has to traffic. The highway into town continues as Main Street for about a mile, but then it dead-ends abruptly at Bagdad's most significant feature--the copper mine. The town's other principal road, Lindahl Road, runs perpendicular to Main Street and past a few miles of brush-covered hills, but it, too, ends at the copper mine, an immense open pit, measuring one mile across by half a mile wide, carved into giant narrowing concentric circles, each just wide enough to carry a truckload of treasure.

There is a copper star on the state flag of Arizona, which has been the nation's leading producer of the mineral since the 1880s. Bagdad's existence dates back to 1882, when a couple of men located the first claims on the banks of Copper Creek. The following year, a fellow named John Lawler bought the claims and named the town, so say the legends, because his brother loved to read tales of the Arabian Nights. A less plausible story suggests that a father and son were mining in the area, and the son said, "Pass me another bag, Dad." Of course, that would explain the spelling.