A key element to any road trip is choosing the right soundtrack to bolster the scenery, whether it's Willie Nelson's high-pitched twang, Bruce Springsteen's gravelly narrative or the free-and-easy harmony of the Eagles. The sounds enhance the sights, but let's not forget that inspiration goes both ways. That is, the American landscape--and the act of traveling through it--has been the inspiration for countless classic songs. In fact, other than perhaps love found and love lost, the road trip may be the most common theme in music, regardless of the genre.

There are countless songs to choose from--by everyone from the Allman Brothers and the Doobie Brothers to the Beach Boys and the Indigo Girls. There are no-brainer classics like Willie Nelson's "On the Road Again" and Steppenwolf's "Born to be Wild" and John Denver's "Take Me Home, Country Roads." There are songs in which the singer knows an exact destination (Lynyrd Skynyrd's "Sweet Home Alabama") and none at all (Chuck Berry's "No Particular Place to Go"). And there are tunes that conjure up immediate images of iconic road trips. Can you listen to "Movin' Right Along" without picturing Kermit and Fozzie Bear? Or "Holiday Road" without seeing Chevy Chase and family cruising down the highway in a station wagon?

So the options are many. But you certainly can't go wrong with these eight among your playlist:

Me and Bobby McGee (Janis Joplin) 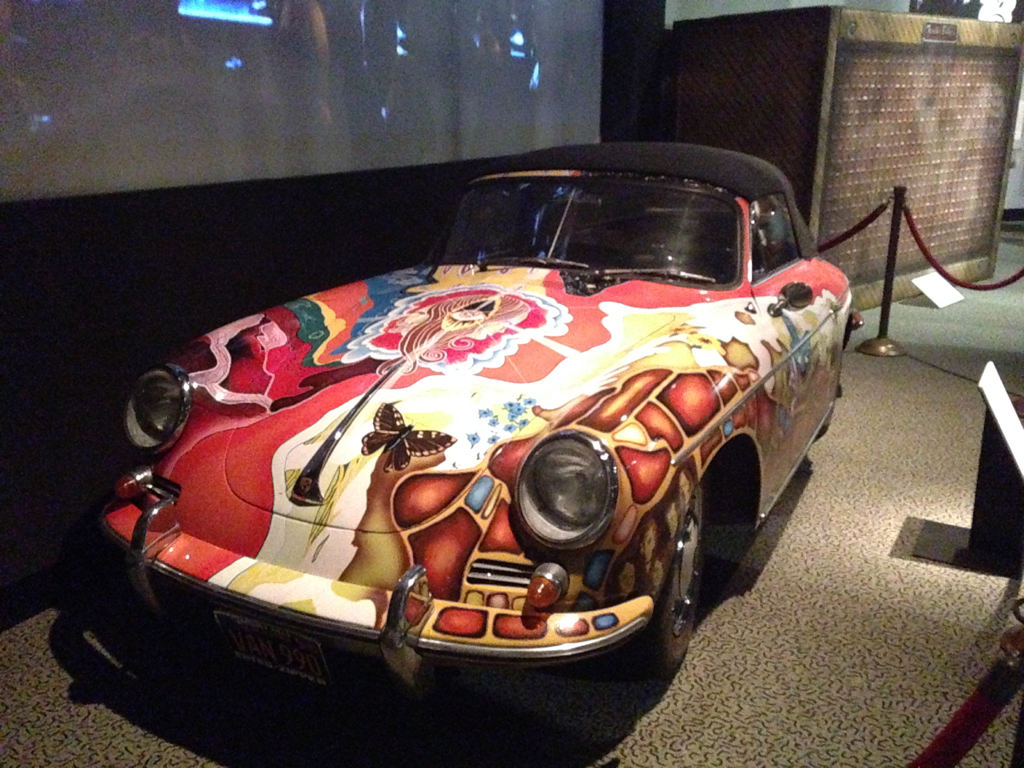 The above photo shows Janis Joplin's Porsche on display at Cleveland's Rock and Roll Hall of Fame. One might say that she did to "Me and Bobby McGee" what she did to her beloved car--turned it into a work of art. Kris Krisofferson wrote the song, and you can YouTube his fine duet with Sheryl Crow. Artists like Pink have sung the song often--and often remarkably. And if you want to find a really cool and unusual version, check out Jerry Lee Lewis's epic piano stylings. But there's something about Janis's version--about her road trip from Baton Rouge, Louisiana, to Salinas, California, with a now-lost lover--that resonates.

The song is both intimate and epic at the same time. Intimate in that it the lyrics so beautifully capture the little moments that become lasting memories ("Windshield wipers slapping time... I was holding Bobby's hand in mine... We sang every song that driver knew..."). And epic in the sense that "Me and Bobby McGee" celebrates the big-picture--the reasons why people hit the road and the epiphanies gathered along the way ("Freedom's just another word for nothing left to lose").

Up Around the Bend (Creedence Clearwater Revival) 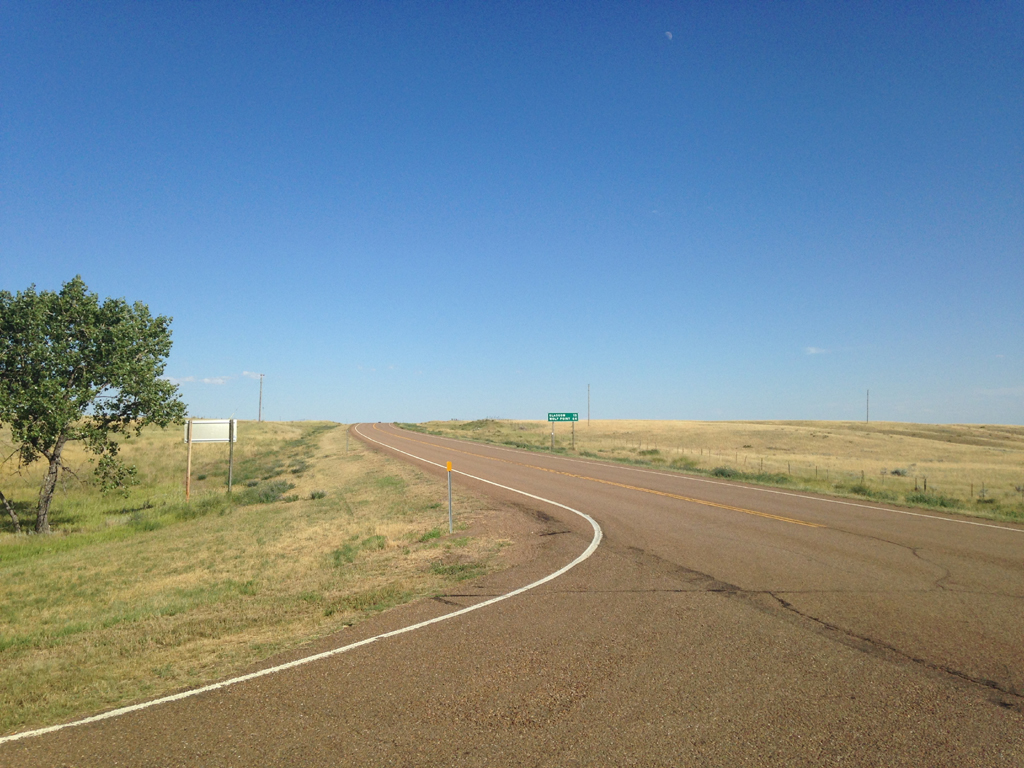 Technically, the singer of this song is walking ("Catch a ride to the end of the highway... and we'll meet by the big red tree... There's a place up ahead and I'm goin'... Come along, come along with me.") But what "Up Around the Bend" does so well is convey the not necessarily competing notions that the road allows you to both live in the moment yet muse while you move, to lose yourself in your thoughts yet share those thoughts with your companion ("You can ponder perpetual motion... fix your mind on a crystal day... Always time for a good conversation... there's an ear for what you say.").

Mostly, John Fogerty's lyrics capture the spirit of possibility. Bob Seger's classic "Turn the Page" is actually about the same old, same old of a road trip (or at least a rock star's road trip). But this catchy tune is really about travel as an open book, a page-turner, and you don't really know how it's going to end. ("Come on the risin' wind... We're going up around the bend...") 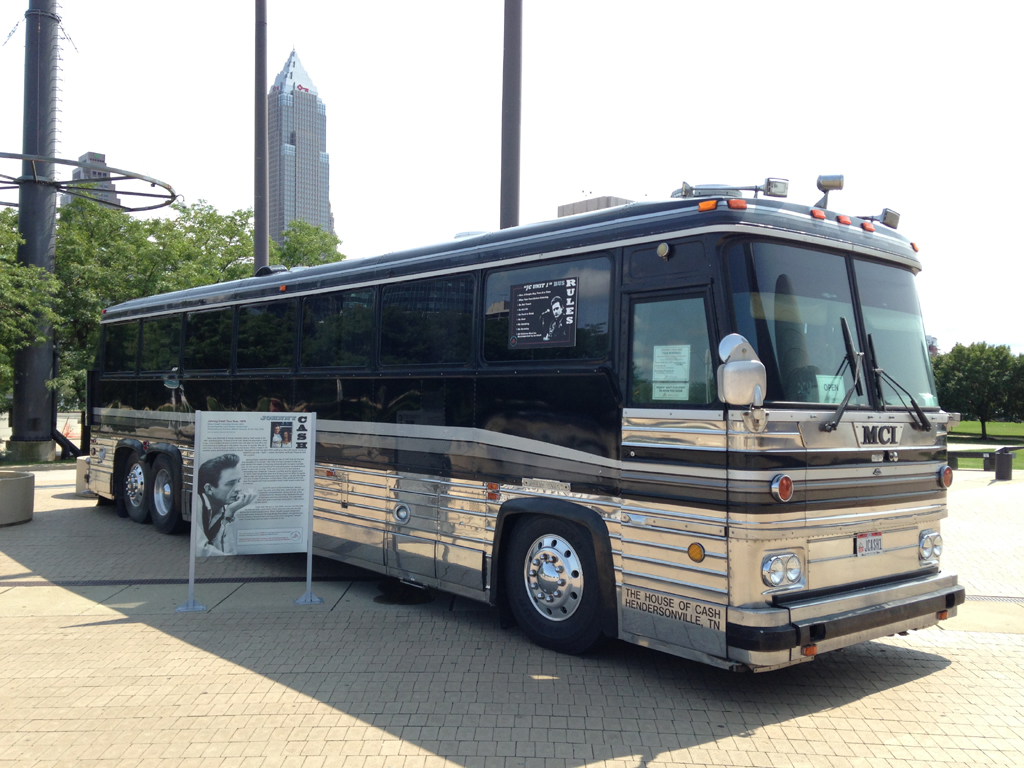 The bus above is Johnny Cash's tour bush when it was on display at the Rock and Roll Hall of Fame. When the Man in Black says, "I've traveled every road in this here land!"... well, you believe him. When he croons, "I've been everywhere, man... Crossed the deserts bare, man... I've breathed the mountain air, man"... you hear the been-there-done-that in his voice.

And then he starts ticking off the places he's been. "Reno... Chicago... Fargo... Minnesota... Buffalo... Toronto... Winslow... Sarasota." And maybe you think, Hey, so have I! But Johnny Cash's road never really ends. He starts mentioning places like Chicopee and Fond du Lac and Waterville and Jellico and Mattawa and Oskaloosa... and you realize you still have a long way to go. In fact, at the website johnnycashhasbeeneverywhere.com, a fellow named Iain has created a video that drops a pin on a map for every place Cash mentions in the song, a handful of them even well beyond the U.S. borders. He estimates that, if you follow Cash's itinerary in order, you'll travel 189,150 kilometers--or roughly 118,000 miles. 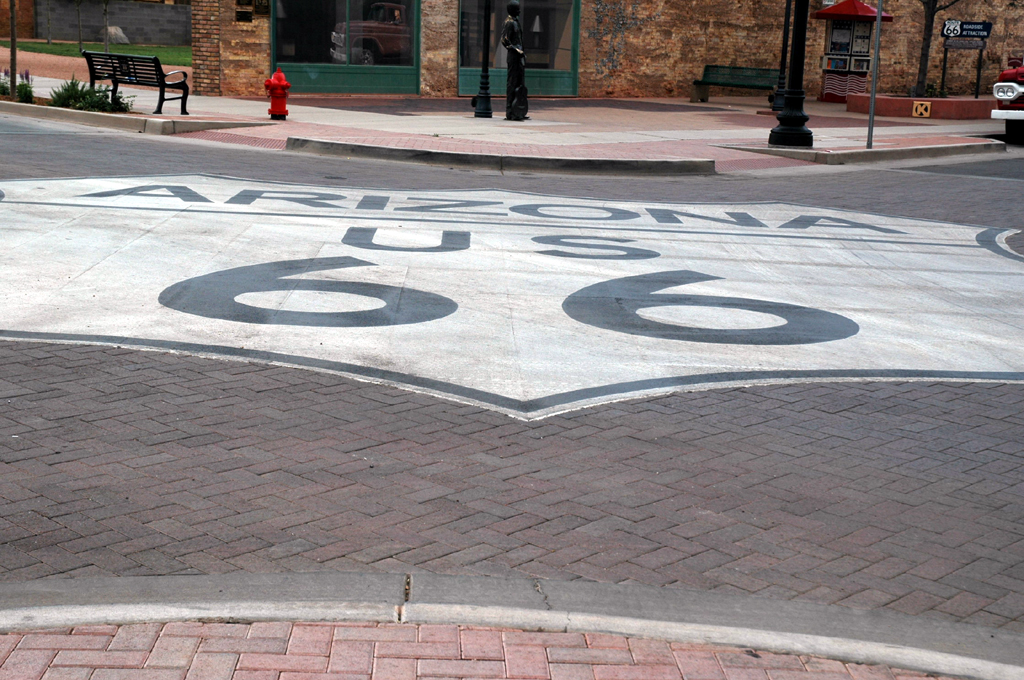 Yes, the original song-lyric city-lister wasn't Cash. This rhythm and blues standard, composed in 1946 by Bobby Troup and turned into a hit by Nat King Cole that same year, actually was the product of a genuine road trip. The story goes that Troup and his wife were headed toward Hollywood on a cross-country drive, most of it along Highway 40 and old Route 66. Hmmm, Highway 40, Troup thought. Maybe I'll write a song about that. Until his wife suggested a title: "Get Your Kicks on Route 66." The song was complete by the time the trip was over.

"Won't you get hip to this timely tip... When you make that California trip... Get your kicks on Route 66."

The song, which has been covered by everyone from Bing Crosby to Chuck Berry to the Rolling Stones to John Mayer to Depeche Mode, is a mini-travelogue, almost all of it in geographic order--from St. Louis and Joplin to Oklahoma City and Amarillo to Gallup and Flagstaff to Kingman, Barstow and San Bernardino. Only one town is out of sequence ("Don't forget Winona"). And only one state along the route isn't mentioned--Kansas. Of course, Route 66 only spent 11 miles there.

Take It Easy (The Eagles) 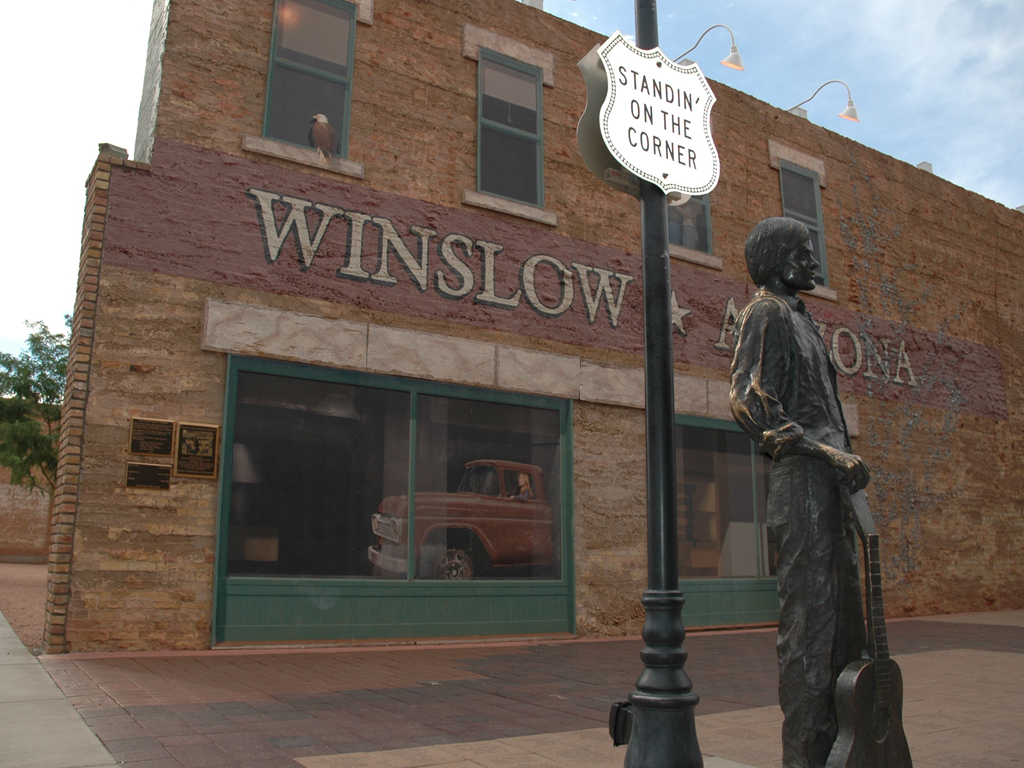 Speaking of Route 66, along that old route, now Highway 40 in Arizona, sits a town called Winslow. Yes, Winslow, Arizona. Ring a bell? "Take It Easy" is a song that just about everyone likes--a great driving song, in fact. Play it, and you can't possibly, as the song goes, "let the sound of your own wheels drive you crazy." And anyone who knows the song is familiar with the iconic lyrics about halfway through it: "Well, I'm a-standing on a corner in Winslow, Arizona... and such a fine sight to see... It's a girl, my Lord, in a flatbed Ford... slowin' down to take a look at me."

So the temptation, of course, is to make a special stop in Winslow just to goofily stand on any random corner. In fact, I know a fellow who wrote a screenplay about a cross-country trip in which he purposely had his characters stop in Winslow so that he could inject that scene into his movie. Brilliant. But you know what? Winslow has made it easy. You see, there's an actual Standin' on the Corner Park there. It features a mural depicting the whole scene. There's a statue of a guitar player actually standing on the corner. Heck, there's even a red flatbed Ford parked there. And there's an annual Standin' on the Corner Festival in a town that desperately needs a reason to re-attract tourists. So while a town inspires a song, in this case, one of those songs has inspired a town. 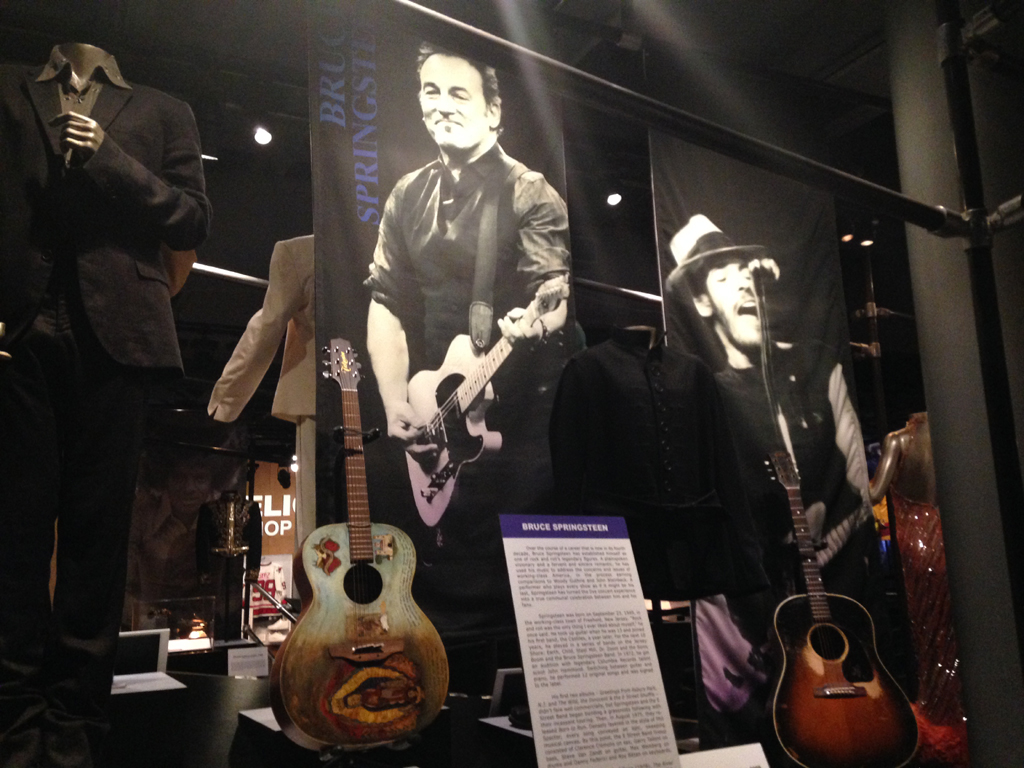 Jon Stewart once deckared, as he was celebrating Bruce Springsteen during the Kennedy Center Honors, "I believe Bob Dylan and James Brown... had a baby." But Springsteen might also be described as a combination of Walt Whitman (the poet of the open road) and Homer (he of the epic tales), because a Springsteen tune has the ability to both immerse a listener in a sense of place and take them on an epic journey. His most famous song, "Born to Run," features a highway "jammed with broken heroes on a last chance power drive." In "Rosalita," he says, "together we're gonna go out tonight and make that highway run." He has written "Jersey Girl" and "Cadillac Ranch" and "Darlington County." He has sun about returning to "Kingstown again" and being "here darlin' in Youngstown" and knowing "a little place in southern California down San Diego way." And heck, he named a whole album Nebraska.

But "Thunder Road," a masterful exhortation to hit the road, a call to ride out tonight "to case the Promised Land." It's the best of Bruce. The ultimate road trip lyric? How about: "Hey, what else can we do now, except roll down the window and let the wind blow back your hair. Well the night's busting open. These two lanes will take us anywhere."

Several years ago, The New Yorker magazine printed a cartoon that showed a car speeding along a lonely highway, very much in the so-called Middle of Nowhere. On the side of the road was a sign offering this piece of whimsy: YOUR OWN TEDIOUS THOUGHTS NEXT 200 MILES. Clever? Yes. But tedious? No. When you can see forever, your thoughts expand to fill the surroundings. You feel very much alive in the moment, as if all of the clutter and traffic and obstructions of the crowded world have fallen away, leaving only revelations.

The term "Middle of Nowhere" seems to be a city dweller's implication that anything without a string of Starbucks and sushi bars is somehow unworthy of exploration. But there are nuggets hidden in the tiny hamlets that dot the country--and in the spaces between those dots. So the "Road to Nowhere" can be an adventure.

King of the Road (Roger Miller) 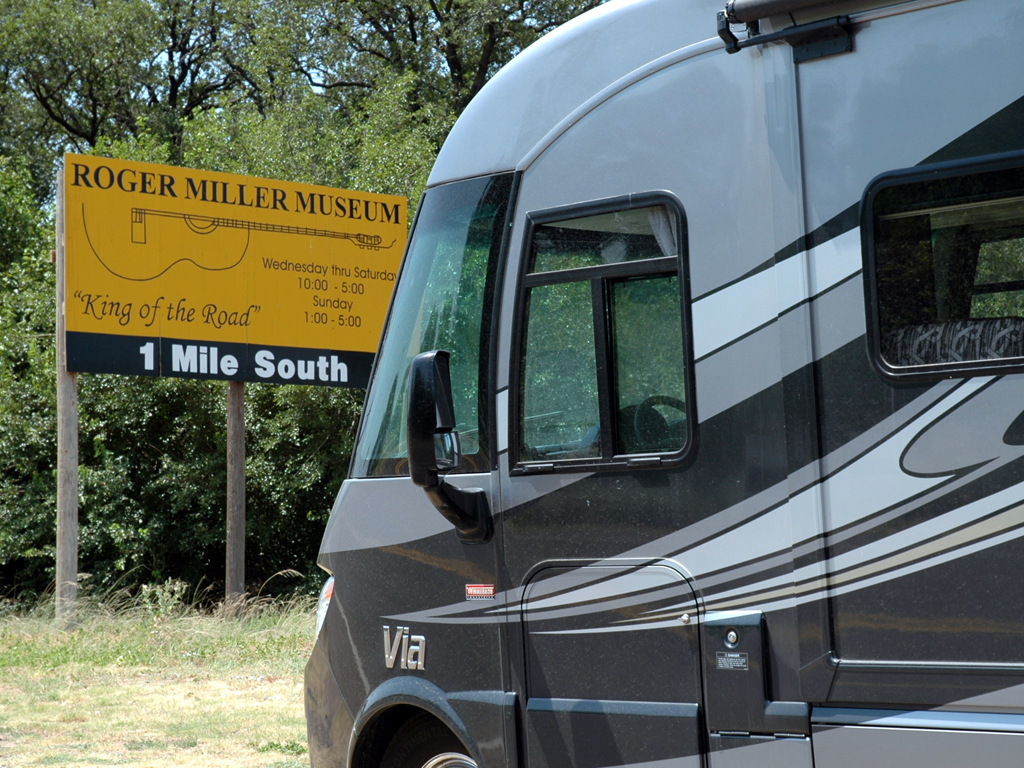 There is a Roger Miller Museum in Erick, Oklahoma. Appropriately, it's along Route 66--because the man who crooned an iconic travel song should be celebrated along an iconic roadway. Appropriately, too, the museum is located in a nearly 80-year-old building that was once a drugstore and cafe--because "King of the Road" is a throwback song. It's the musical version of "Chew Mail Pouch Tobacco" advertisements and Burma Shave signs. I mean, c'mon, "rooms to let: 50 cents."

It took Miller months to write what would become the biggest hit of his recording career. But he was inspired by two fleeting encounters--a sign in Chicago that offered "Trailers for Sale or Rent" and a hobo that he met in Boise. And of course, the song resonates because any traveler knows that the most priceless experiences are the free ones--sunlight filtering through California redwoods or endless fields of Kansas sunflowers or Key West sunsets.