To travel is to explore, and often that means exploring the feats of... well, famed explorers, whether than means the trail blazed by Lewis and Clark or the accomplishments of Neil Armstrong and Buzz Aldrin. And to travel is also to blaze your own trail, to investigate places you might not otherwise have considered, places so exotic that they're almost otherworldly. Yes, a road trip can allow you to explore worlds beyond your own. This could mean a small-town tour of the solar system--hamlets like Mercury (Nevada), Venus (Florida), Mars (Pennsylvania), Jupiter (North Carolina) and Neptune (New Jersey). Or Moon (Kentucky). Or North Star (Michigan). Or even Cosmos (Minnesota).

Or you can really explore the final frontier by visiting these eight spacey places: 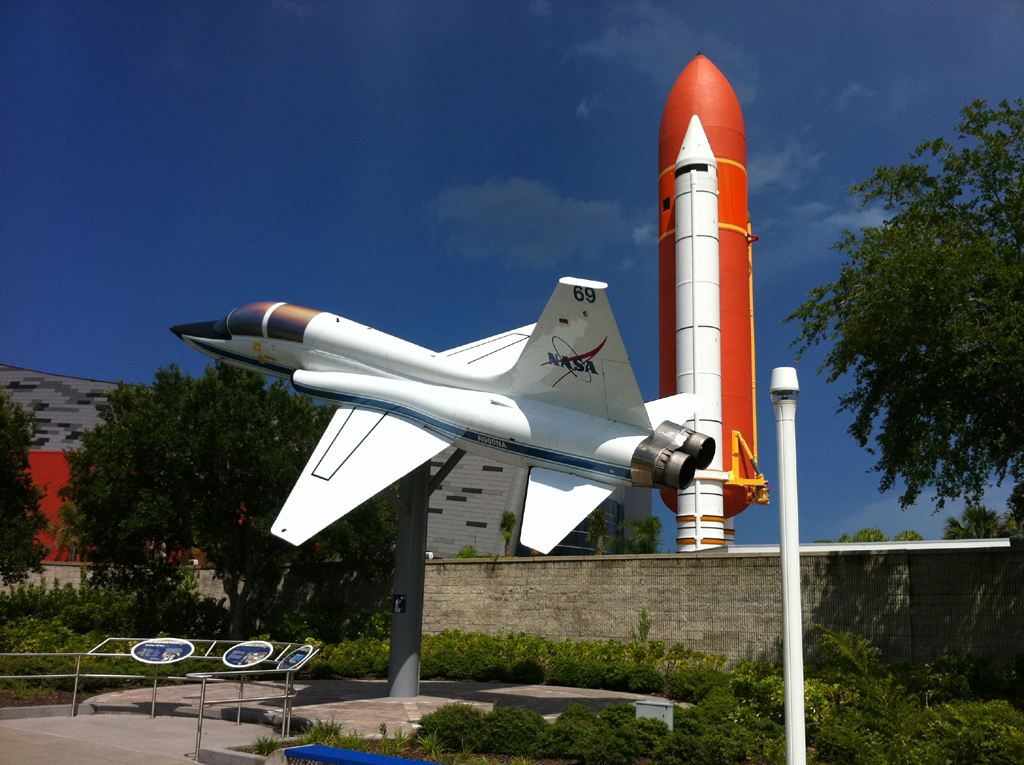 It's just 45 minutes east of Orlando, Florida, but if you're a space nerd Kennedy Space Center may be the happiest place on Earth. Kids love attractions like the Children's Playdome and IMAX movies about the Hubble telescope and deep space exploration and, on most days, meeting a real-live astronaut in "Astronaut Encounter." But this is also very much an adult playground. A stroll through the Rocket Garden (featuring Redstone and Atlas rockets and Gemini and Apollo capsules) is a bit like walking through a redwood forest of mechanical and technological marvels. And the Astronaut Memorial, which honors fallen explorers, is a reminder that those marvels are fueled by no small amount of courage.

Perhaps the most remarkable attraction at Kennedy Space Center is one of the newest ones. "Space Shuttle Atlantis" tells the story of NASA's 30-year space shuttle program. It is an epic experience. You walk into a large building beneath life-size replicas of the space shuttle's huge rocket boosters and orange external tank. Sure, it looks like a massive hotdog being sent into space, but the size of it conveys just how much power was necessary to send a shuttle into the stratosphere.

After watching a fictionalized film about the space shuttle's oft-delayed development, you move into an anteroom of sorts where you're mesmerized by another film, this one playing on screens in front of you, beside you and above you. You feel like you're on the shuttle itself. But the coolest part--the way coolest part--is when the film ends, and the walls part, and there is the actual Space Shuttle Atlantis, tilted at an angle as if flying one of its 33 missions, its payload doors open, surrounded by two floors of exhibits and simulations. You'll likely hear an audible gasp, and it might come from you. 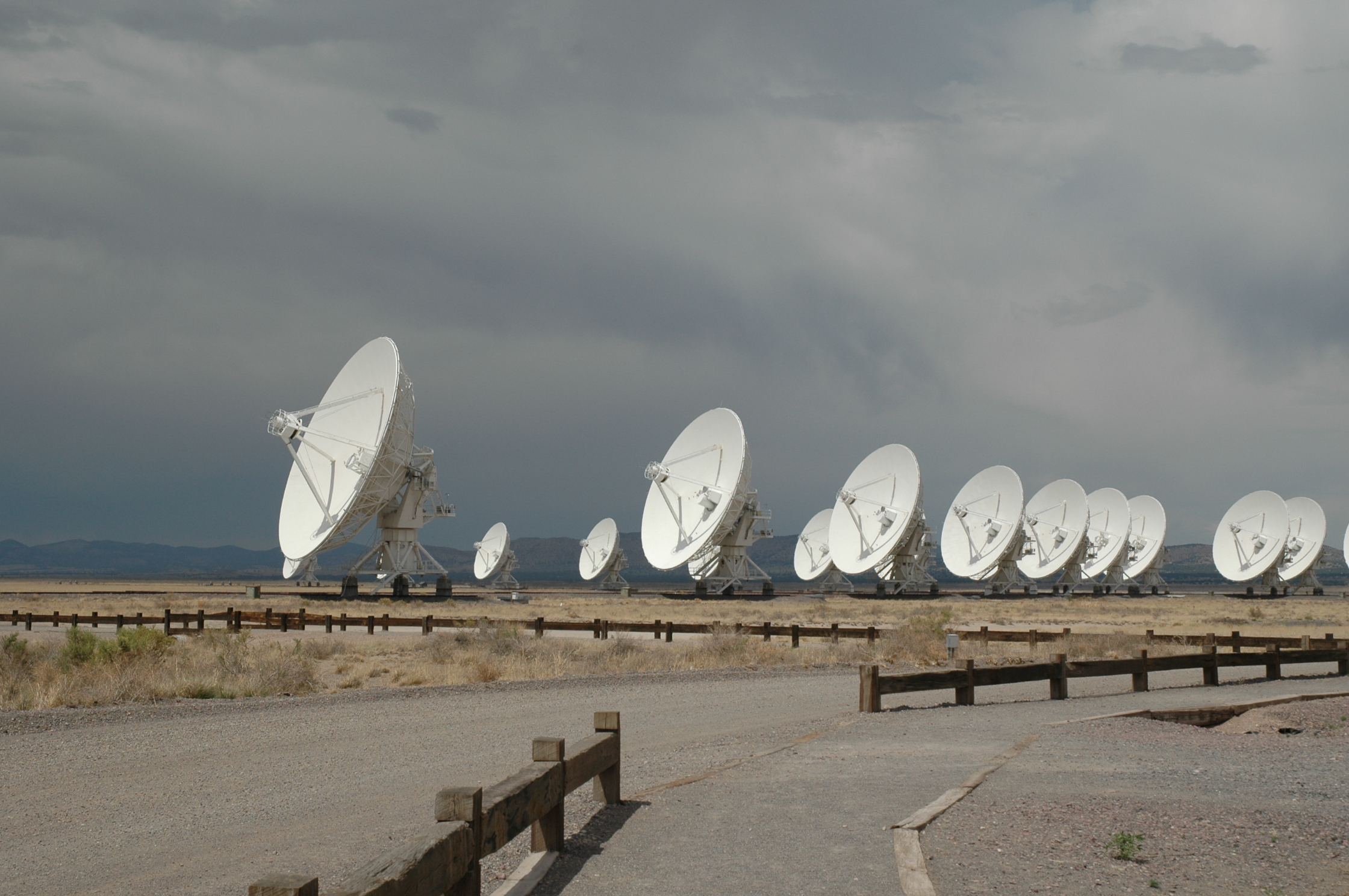 If you've ever seen the Jodie Foster film Contact, you've seen the National Radio Astronomy Observatory's Very Large Array, the massive radio telescope seeking stuff WAY out there--not just intelligent life, but also everything from pulsars to black holes. And, in terms of a road trip, it's a bit way out there, too--along Highway 60 in rural New Mexico. Then again, as the VLA shows, sometimes the most amazing wonders are hard to find.

The VLA consists of 27 separate satellite dishes connected electronically to act as one. A short film--sans Jodie Foster--and a brief exhibit describe the history and achievements of the observatory, then visitors are invited to take a self-guided walking tour of the property. You can amble right up alongside one of the enormous dishes, each about the size of a baseball diamond and weighing some 230 tons.

Each dish moves along a set of tracks, so that the examination of incoming radio waves can be as concentrated as necessary. You might arrive at a time when the dishes are rather close together, though still spanning perhaps a square half mile. On other days, they can cover an area about the size of Washington, D.C. Really. That's why they don't just call it The Array. 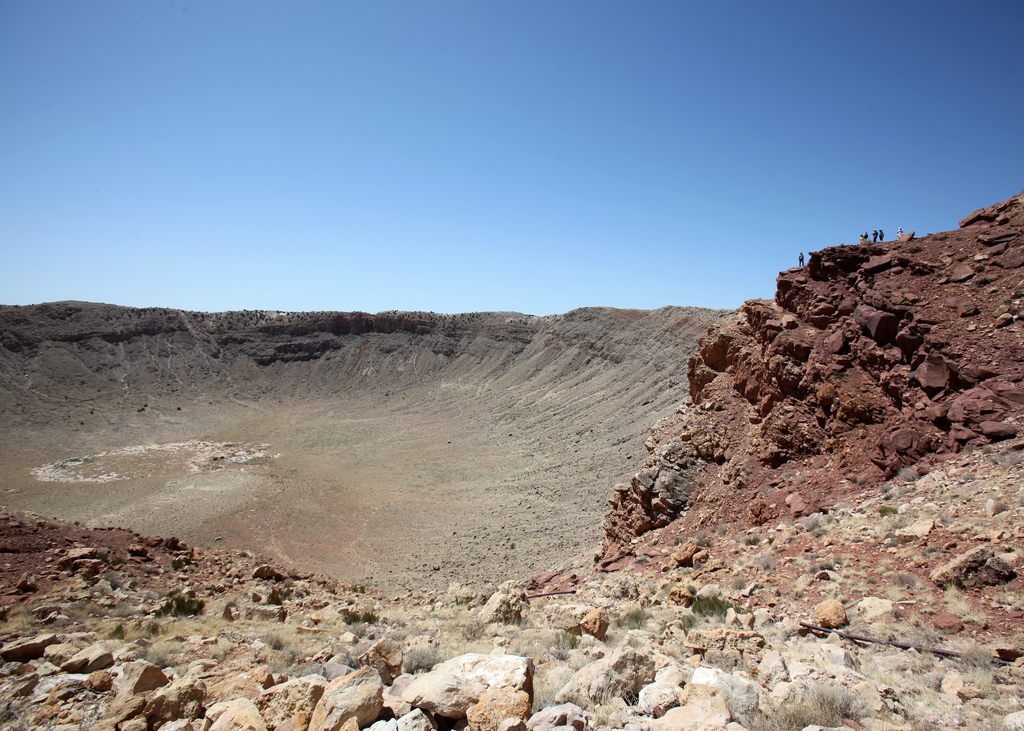 The world's best preserved meteor impact site sits just a few minutes from Interstate 40 and about an hour east of Flagstaff, Arizona. About 50,000 years ago, a piece of an asteroid (probably measuring about 150 feet in diameter, traveling at nearly 26,000 miles per hour and weighing several hundred thousand tons) crashed into Earth and left a crater more than 550 feet deep and one mile across. It pales in comparison to the Grand Canyon, which is only a couple of hours away, but while the canyon is the product of a river's relentlessness, the crater is the result of one big boom. Apparently, it exploded with a force greater than 20 million tons of TNT.

The on-site Interactive Discovery Center examines the meteor and the crater--including a display of the Holsinger Meteorite, the largest fragment of the 150-foot meteor ever found. But it also offers visitors a broader perspective of the, well, impact of impacts. What's the difference between an asteroid and a meteor and a meteorite? What are the major impact sites on the moon? What was the deal with that fireball that streaked across the Siberian sky in 1908, its impact heard 600 miles away? For that matter, how about the ones that struck Germany in 1492 and Croatia in 1751? Did a giant meteor lead to the extinction of the dinosaurs? And, perhaps most important, how can we track and predict such close collisions? When you take a good look at Meteor Crater, that last question will loom large. 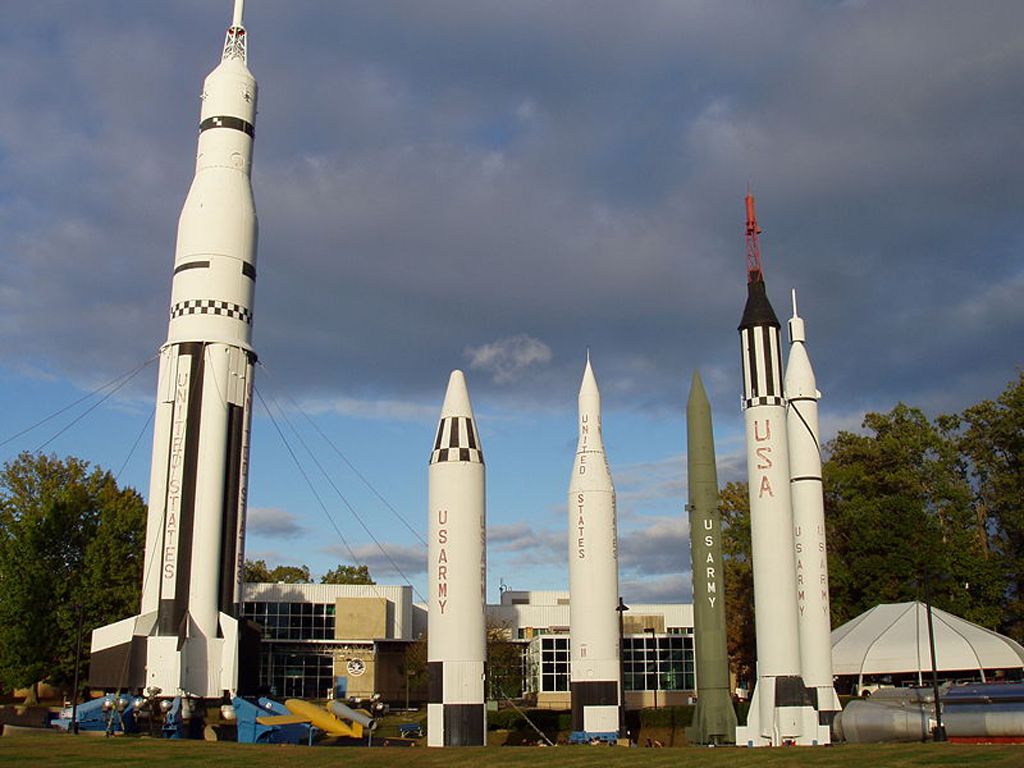 When famed NASA pioneer Wernher von Braun arrived in Huntsville in the 1950s, the little city touted itself as the Watercress Capital of the World. Then Braun and his colleagues used the locale as a base to develop the rockets and propulsion systems and modules that made space exploration possible. Now the U.S. Space and Rocket Center, an affiliate of the Smithsonian Institution, draws hundreds of thousands of visitors annually.

The goal is immersion. This means seeing the 27 missiles and rockets in Rocket Park, the Saturn V Moon Rocket, the Apollo 16 Command Module, the Skylab solar array, and a moon rock grabbed by the Apollo 12 astronauts. This means choosing from 3D IMAX films about everything from airplanes to the exploration of Mars. And this means playful simulations--from a Mars Climbing Wall to a G-Force Accelerator.

The U.S. Space and Rocket Center is also the headquarters of Space Camp, where kids (and families and adults) can approximate astronaut training. Think of it as a stratospheric dude ranch, a way to play space cowboy, a zero-gravity, cutting-edge rodeo. And some of Space Camp's more than 600,000 trainees over the years have actually become astronauts. 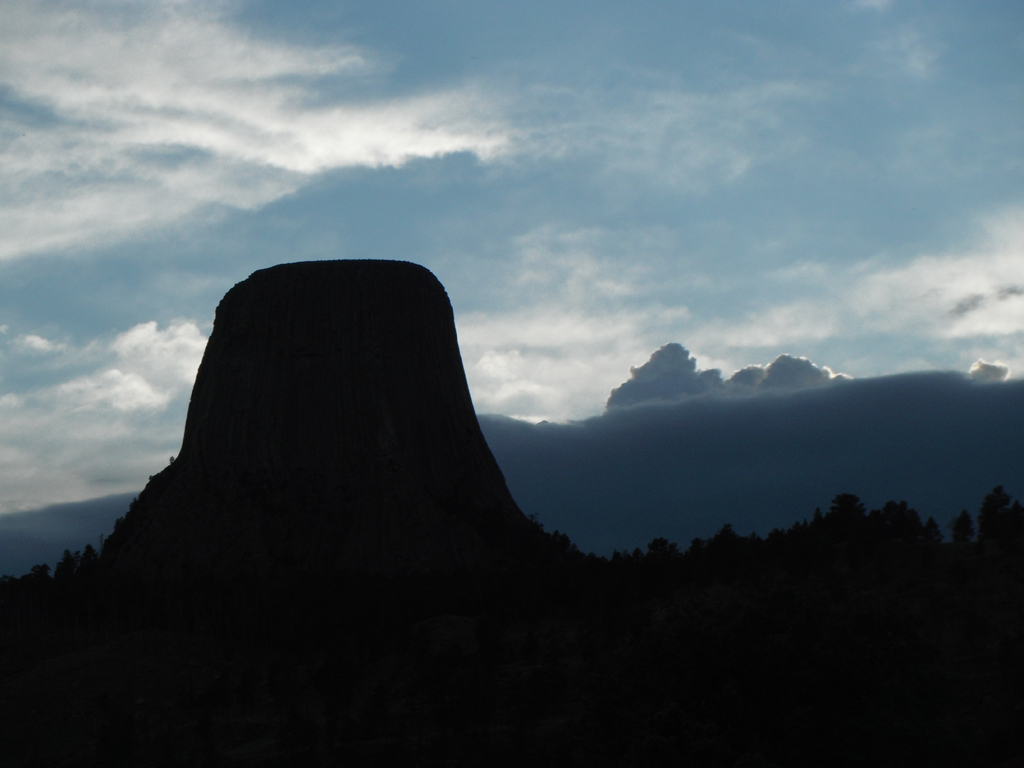 If you remember the 1977 film Close Encounters of the Third Kind, various UFO sightings and encounters around the world culminate in a first contact scene in which an alien mothership lands at Devils Tower in northeastern Wyoming. Throughout the movie, a couple of characters who had experienced the UFO encounters found themselves gravitating to a certain shape, which turned out to be that distinctive shape of Devils Tower. What a perfect image for the concept. Would any other natural American locale have been so recognizable? Devils Tower has the shape, the dangerous name, the far-out location. It was as well-cast as Richard Dreyfuss.

Named America's very first national monument in 1906, it is an 867-foot-tall, 60-million-year-old fountain of magma that cooled and fractured into long columns. An easy mile-and-a-quarter hike around its circumference allows you to see it from all angles as the sun outlines its remarkable columns and the boulders at its base that once clung to the side of the formation. You might also see climbers trying to summit the thing--a four or five-hour exercise. And then, when you've seen Devils Tower from all perspectives, you can try one more--Devils Tower as alien landing sight. Just spend the night at the KOA Kampground three miles away and park yourself in front of the nightly showing of Close Encounters. 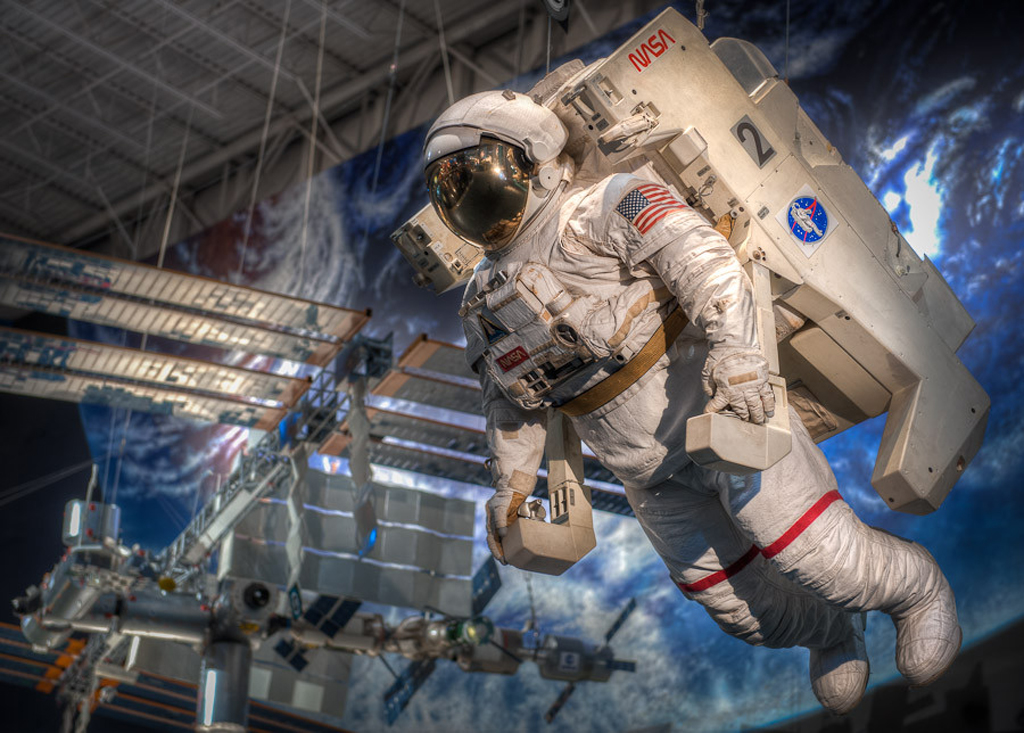 If you want to offer your kids--and perhaps yourself--a hefty education disguised as hands-on entertainment, then Houston, we have a solution. Space Center Houston, located just south of the city, is the official visitor center of NASA's 1,600-acre Johnson Space Center, where astronauts are trained, where the space program is managed, and where scientists and engineers work to further the boundaries of technology and discovery. Guided tram tours of Johnson Space Center are available, departing every 40 minutes for places like the Historic Mission Control Center and the Space Vehicle Mock-up Facility.

But especially if you have little ones in tow, Space Center Houston is a science center masquerading as a children's play paradise. Countdown? How about this:

10... Take a spin in a centrifuge that you power like a bicycle... 9... Drive a lunar rover and power a robotic arm in the "Be the Astronaut" attraction... 8... Participate in an interactional presentation about life in the International Space Stations... 7... Design an outpost on Mars... 6... Watch "Rad Rhonda's" Stellar Science Show... 5... Satisfy your Trekkie desires at the life-sized Galileo Shuttlecraft... 4... Have lunch with a NASA astronaut... 3... Explore the world's most comprehensive selection of space suits... 2... Gawk at the world's only shuttle mounted on a shuttle carrier aircraft--at brand new Independence Plaza.... 1... Explore the sensation of a launch--in the Blast-Off! Theater. 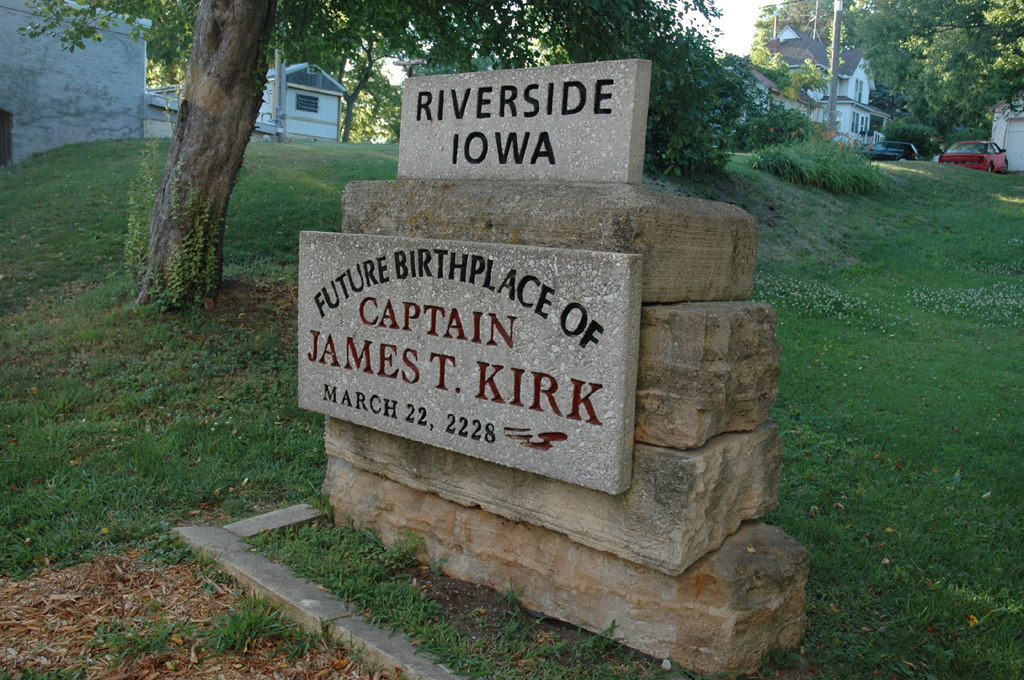 Lots of American small-towns trumpet the glories of past residents. Tupelo, Mississippi, is "Home of Elvis Presley." Yukon, Oklahoma, is "Home of Garth Brooks." Strasburg, North Dakota, is "Home of Lawrence Welk." But the town of Riverside, about 15 miles south of I-80 in southeastern Iowa, sings a different tune. Here, it's all about the future. Says the plaque located behind a former barbershop, "Future Birthplace of Captain James T. Kirk."

Apparently, "Star Trek" historians have deduced that Captain James Tiberius Kirk will be born on March 22, 2228. Sure, that's two centuries away, but Riverside is doing its best to cash in contemporarily. Along with (strangely) what looks like a faux tombstone in honor of Kirk's birth, there's a scale model of a starship they call U.S.S. Riverside parked in front of a tiny attraction called the Voyage Home Museum. There's an annual celebration of Kirk's birthday at Murphy's Bar & Grill. And whereas Riverside once celebrated an annual "Riverfest," now it's a "TrekFest" in late June. Along with the usual pet show and talent show and demolition derby, festivities generally included a "Star Trek" trivia contest, "Star Trek" screenings in the town's Red Barn, a parade and a sci-fi swap meet.

So a trip to Riverside can feel like an exploration of quirky Americana, or perhaps a journey into the future, or maybe simply, in the words of Kirk himself, a mission "to explore strange new worlds, to seek out new life and new civilizations, to boldly go where no one has gone before..." 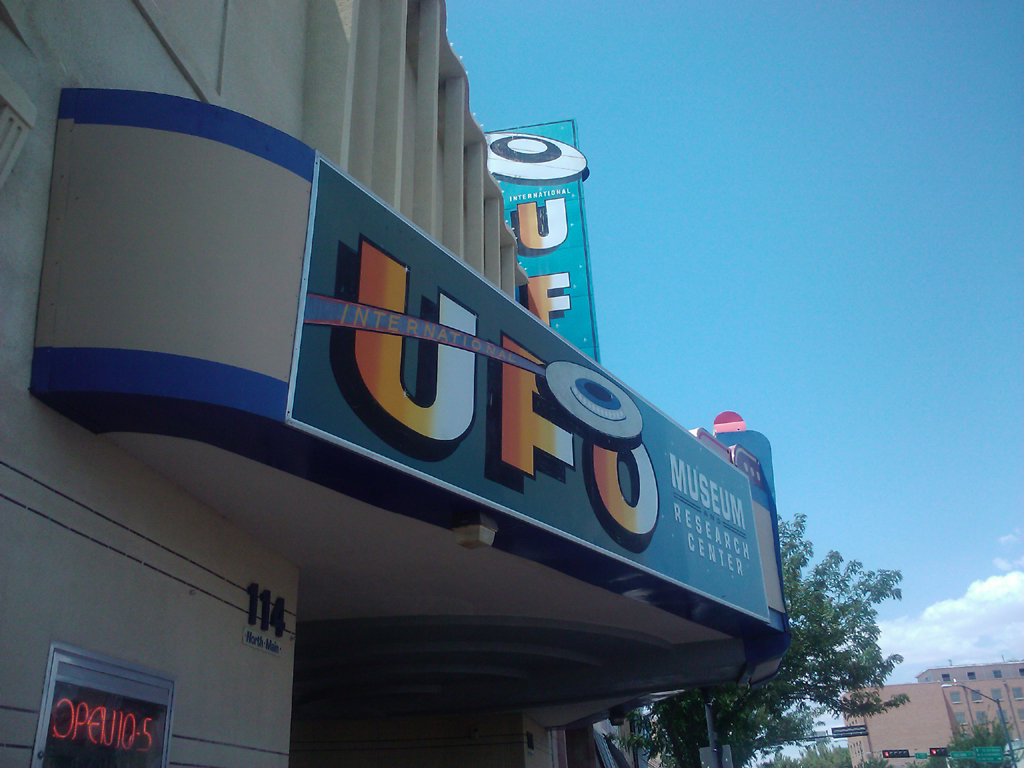 Roughly 48,000 people live in the eastern New Mexico city of Roswell--that is, if you don't count the aliens. Some seven decades ago, in 1947, an object crashed in the general vicinity of Roswell. Was it a weather balloon, or was it an extraterrestrial spacecraft? Were its occupants captured, as conspiracy theorists insist? And, as they further contend, was the whole affair covered up? Roswell has built a whole tourist trade around the notion.

The International UFO Museum explores the Roswell Incident and UFO sightings in general. It is a Martian-believer's Mecca. Tantalizing Area 51 information? Check? Titillating alien abduction stories? Yup. Curious crop circles? You bet. And if you're interest extends further, there's a whole research library available. And, of course, each year in the days surrounding Independence Day, Roswell hosts a UFO Festival, so now the strange and curious are drawn to Roswell's strange and curious. Among the events is an alien costume contest, which--if an unsuspecting witness happened to pass by--is just the kind of thing that might have sparked the otherworldly theories in the first place.