Arnold Palmer once said, "What others may find in poetry or art museums, I find in the flight of a good drive." He was talking about golf, of course. But let's re-word that, shall we? Let's say this: There is poetry in a great museum. And, in house-on-wheels terms, here are eight museums that are very much worth the drive: 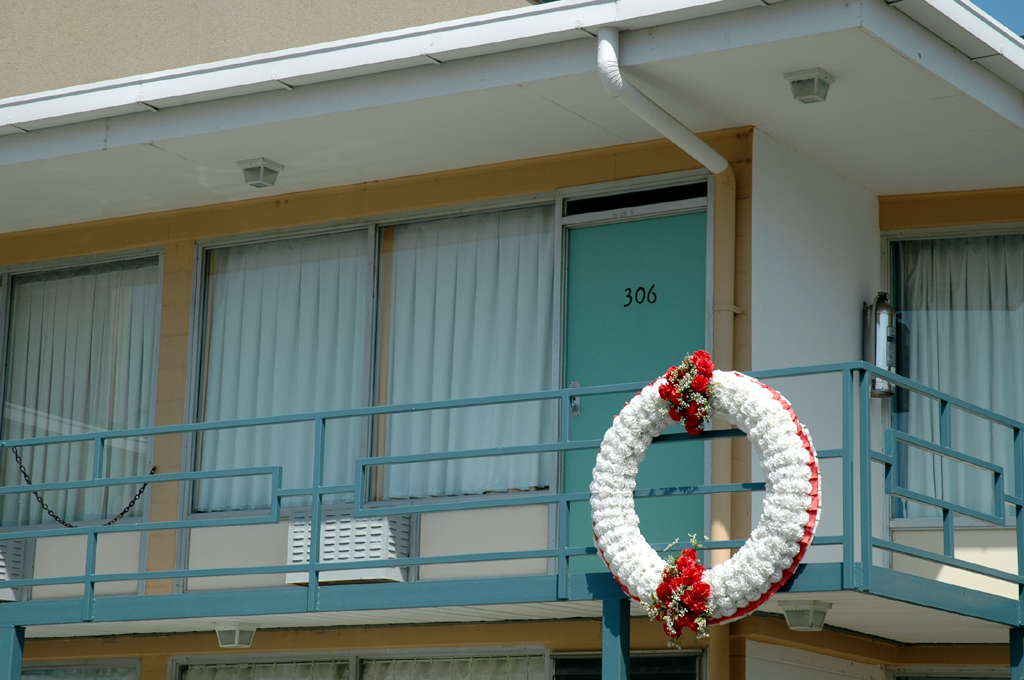 The facade of the Loraine Motel is still there, and there are even cars from the era parked in front. There, too, is Dr. Martin Luther King's Room 306, his last respite on that fateful day of his assassination in April 1968. But the rest of the motel has been reborn as a museum, a place for people to explore the tragedies and triumphs of the civil rights movement.

You walk into the building, and you're first invited to sit for a ten-minute introductory film. Then you're led on a chronological journey through the people, places and events that became touchstones of the cause. Harriet Tubman. Sojourner Truth. Frederick Douglas. Montgomery. Greensboro. Birmingham. Selma. Boycotts. Sit-ins. Marches. Emmett Till. Medgar Evers. Schwerner, Chaney and Goodman. Epithets. Fire hoses. Nooses. Jackie Robinson. Thurgood Marshall. Rosa Parks.

Finally, you make your way to 1968, to Memphis, to the Loraine Motel--which is when you arrive at Room 306. And somehow, despite the weight of the loss of a great man at that very spot, you still feel rather buoyed by a sense of all that he and his colleagues managed to accomplish. 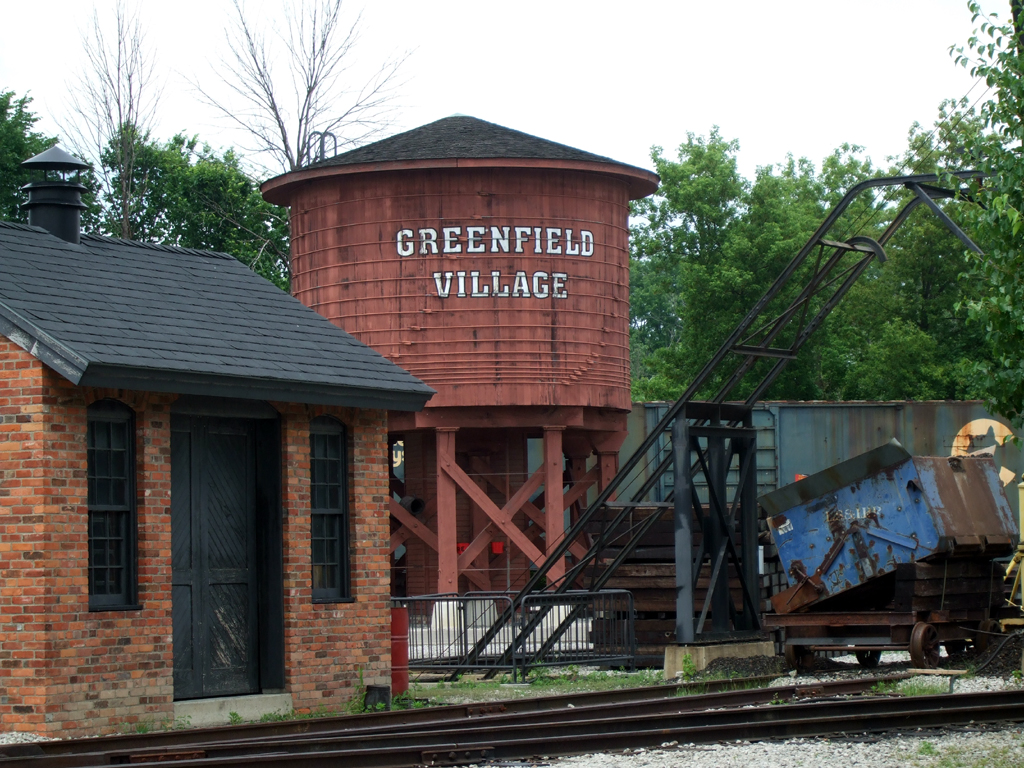 The Henry Ford Museum and adjacent Greenfield Village represent a flag-waving and era-harkening experience. Ford was a collector, amassing countless artifacts and dozens of buildings in an attempt to capture the breadth and wonder of the American experience. Billed as "America's Greatest History Attraction," it just may be.

Ford's thinking was that people can learn history a lot better if they see it instead of reading it in a book, so Greenfield Village spans more than 300 years of history over 90 acres. You can ride an 1880 steam locomotive, cruise aboard a paddle-wheel steamboat, ride in a vintage Model-T, get dizzy on a 1913 carousel, check out the Wright brothers' cycle shop, see Robert Frost's home, or watch costumed potters, printers, weavers and glassblowers.

The museum? It is even more history-brimming, offering everything from old Burma Shave signs to a 1939 Soap Box Derby car and an 1896 electric bicycle. Indeed, amid the hundreds of vehicles inside the massive complex are these American icons: the bus that Rosa Parks made famous, a 1952 version of the famed Oscar Mayer Weinermobile, the rocket-like Goldenrod that set a land speed record at the Bonneville Salt Flats, Charles Kuralt's "On the Road" motorhome, Teddy Roosevelt's horse-drawn carriage, the presidential limo in which JFK rode on the day of his assassination, the first working helicopter, and a replica of Charles Lindbergh's Spirit of St. Louis. It's a heck of a place to visit in a 21st-century Winnebago. 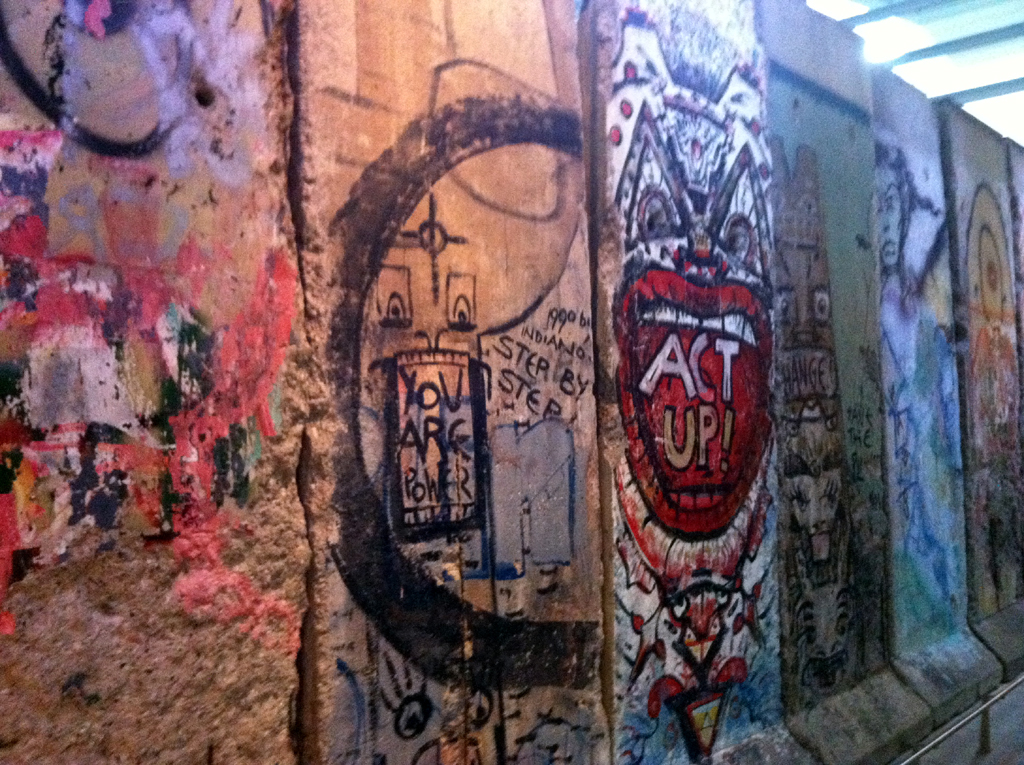 What makes the Newseum remarkable, aside from the fact that your entrance fee allows next-day entry as well (because there's that much to see), is this: It consists of seven floors of exhibits devoted to 45 words--the five freedoms of the First Amendment. It is about the power of protest and the press.

Imagery? In the Berlin Wall Gallery, you can actually stand alongside a section of that iconic wall, which symbolized modern oppression. The 9/11 Gallery includes a section of a mangled antenna from the North Tower at the World Trade Center, along with a wall featuring dozens of front pages from around the world--from September 12, 2001. A two-story, glass Journalists Memorial bears the names of members of the media who died in the line of duty. The Bloomberg Internet, TV and Radio Gallery is a massive series of walls covered with televisions that show clips and trace the evolution of electronic news. And the Pulitzer Prize Photographs Gallery displays every winner of the award (warning: most of the images are not pleasant, but undeniably profound).

History? The News History Gallery, the largest gallery in the place, was brimming with material about the history of news gathering over five centuries, including more than 300 historic front pages. And the Cox First Amendment Gallery explores those famous 45 words through the stories of people who used the power of the amendment to express themselves and change the world. 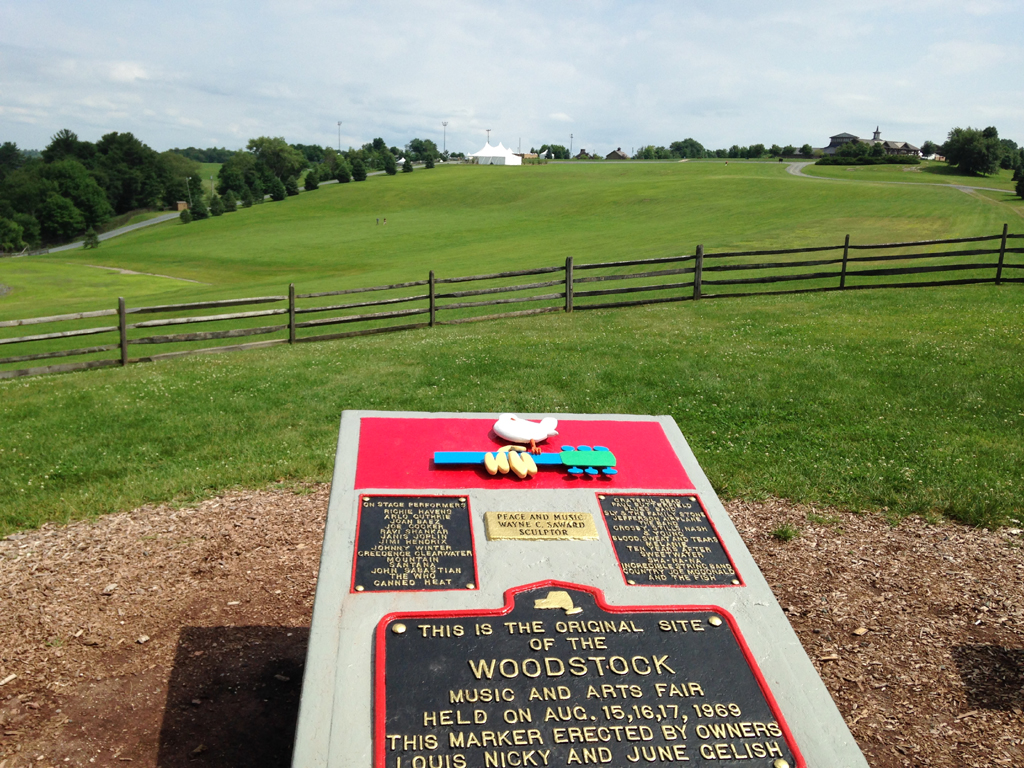 It may be most appropriate to travel here on a whim, just like hundreds of thousands of folks did back in August 1969--to Bethel, New York, and the site of the Woodstock Music Festival. It is now known as the Bethel Woods Center for the Arts, and it hosts year-round contemporary performances in various musical genres. But it remains a sort of counterculture nirvana, like a tie-dyed trip back in time.

Who said museums have to be stuffy? This one, which opened its doors in 2008, tells the story of the Woodstock festival--the hurdles that had to be overcome about where to have it, whom to book, the traffic, the weather. But it examines the free concert within a larger context--the cultural and political upheaval of the 1960s. Flower power. Acid tests. Pschedelic buses. Civil rights struggles. Generational confrontations. The Age of Aquarius.

You can top off your museum visit by plopping yourself onto a beanbag chair and watching an up-close film about the concert--so close, in fact, that you feel like you've had front row seats to history. Then, when you've been sufficiently immersed in the Sixties, you can walk the actual grounds, stand where the stage once stood, look out over the endlessly green countryside, and pretend you're Jimi Hendrix or Joe Cocker enthralling half a million rain-soaked renegades. 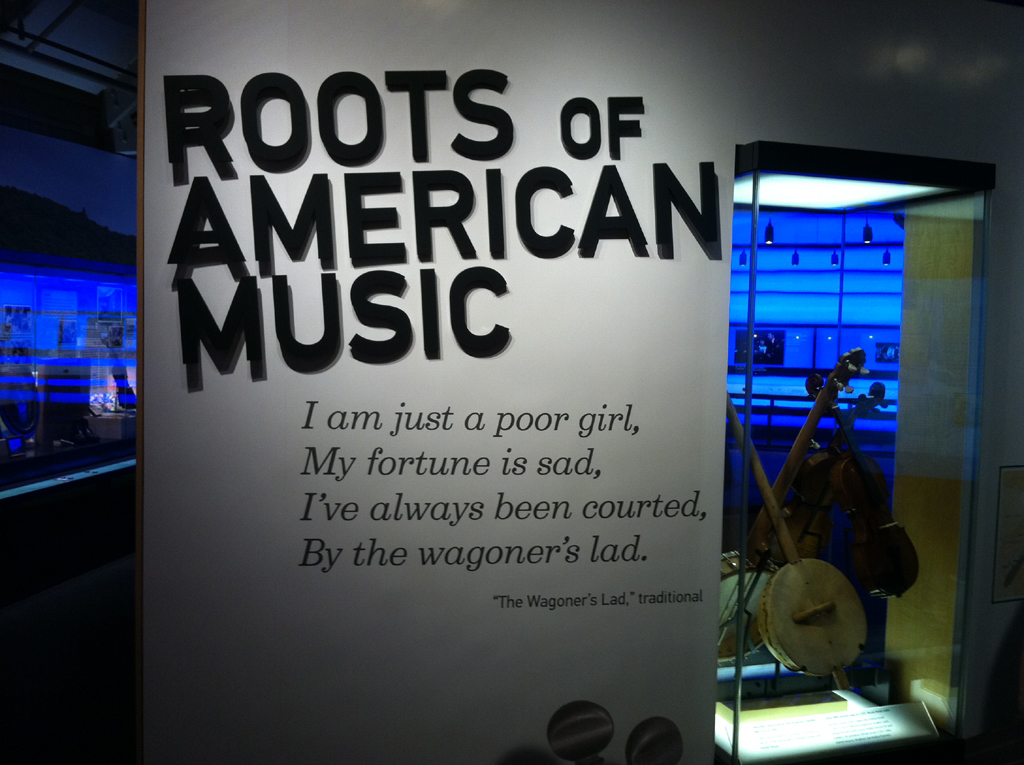 Of course, American music comes in many forms, as does cultural enlightenment. Like, for instance, a visit to the Blue Ridge Music Center at Milepost 213 along the Blue Ridge Parkway. Technically, Roots of American Music is an exhibition and not a full-fledged museum. But don't let semantics diminish the sentiment.

The museum/exhibition is a trip through the sources (from African banjos to European violins), instruments (fiddles, dulcimers), styles (everything from mountain gospel to bluegrass), and songs ("Foggy Mountain Top" and "Old Joe Clark" and "Darling Cora") that constitute Appalachia's unique mountain music. One exhibit describes the music as "sounds that have profoundly influenced the development of American popular music" and the hollows of the Blue Ridge Mountains as "some of the most musical places on earth."

The fact that that the Blue Ridge Music Center hosts a Midday Mountain Music series--you can listen to, say, Bill Anderson on the guitar while his wife Maggie plays the dulcimer--and a Summer Concert Series, well that just means the education is complemented by relevant entertainment. 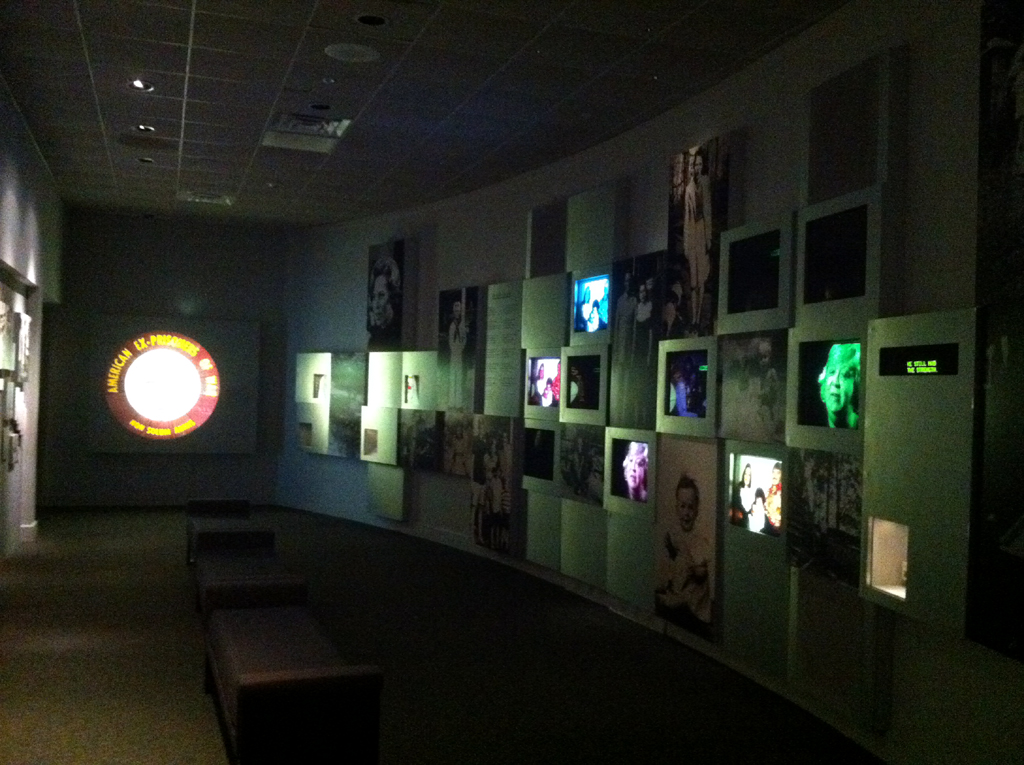 About ten miles up the road from Americus, Georgia, sits Andersonville National Historic Site. Built as a stockade a year-and-a-half before the war ended, Andersonville Prison existed for only 14 months, but housed more than 45,000 wounded, starving, ill, captured Union soldiers. Nearly 13,000 of them died there. Today, the historic site consists of three parts--Camp Sumter military prison, Andersonville National Cemetery and the National Prisoner of War Museum.

A tour of the 26.5-acre prison site allows visitors to shudder at a sense of place, and the cemetery (which still holds some 150 veteran burials annually) does, too. But the National Prisoner of War Museum offers a sense of Andersonville's place in history. In fact, it powerfully examines the American prisoner of war throughout history--through artifacts, letters, videos, artistic interpretation, and re-creations (of a Vietnamese cell known as a "tiger cage," for instance).

It's not necessarily a fun experience, per se, but education is enlightenment, which should be a goal of most every road trip. Besides, when you wander the exhibit halls, each gallery dedicated to a different aspect of the war prisoner experience--capture, living conditions, communications, privation, morale, escape--it gives you an even greater appreciation for what the open road offers: Freedom. 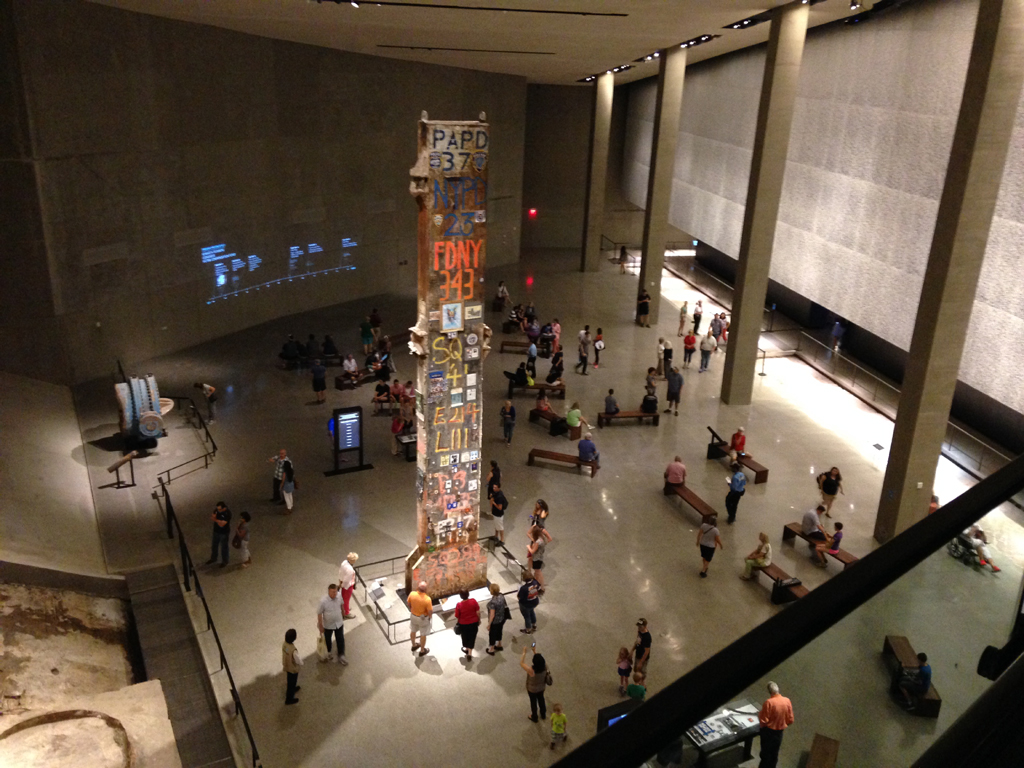 Sometimes you know you HAVE to visit a particular place, even if it promises to be a difficult experience. The Memorial Plaza consists of twin reflecting pools sitting in the shadow of the newly-constructed Freedom Tower and in the footprints of the former towers (and featuring the largest manmade waterfalls in North America). The names of all of the nearly 3,000 victims have been stencil-cut into the parapets. It is a classy and consecrated space.

The 9/11 Museum's 110,000-square-foot exhibition space is located beneath those reflecting pools--at bedrock, several stories below ground in the basement of the World Trade Center. One's first descent into the museum takes you into Foundation Hall--a subterranean exhibit space that includes massive objects with even larger symbolic meaning. Like the 58-ton steel girder--the Last Column removed from the wreckage--that was covered with messages from rescue workers. And the Vesey Street stairs, where hundreds of people escaped before the towers fell. And the wreckage of a fire truck from Ladder Company 3.

The heart of the museum is the historical part--the story of that fateful day. The narrative begins with the construction of the Twin Towers. The "before" photos and memories seem particularly chilling. Then there is the "during"--the news accounts and bystander reactions and fire company communications and stunning images that shocked all of us. And finally, there is the "after"--the search for the missing, the search for the perpetrators, the search for answers.

You'll find the experience to be crowded, yet quiet, each visitor wandering through the story of September 11th and roaming through their own personal memories at the same time. 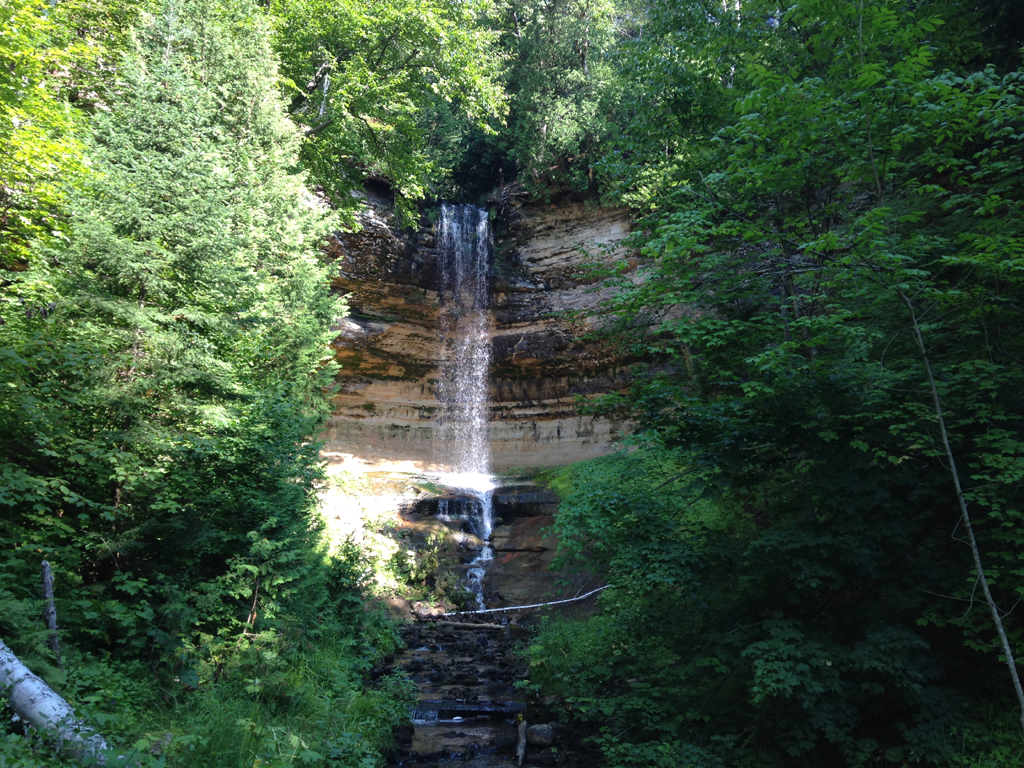 "Peanuts" comic strips evoke an indescribable feeling of purity, of incorruptible childhood. When you come across a drawing of Snoopy and Charlie Brown, their necks craned toward the heavens and their smiles wide, as they dance like nobody's watching, how can you not grin? Same goes for the Charles M. Schulz Museum in Santa Rosa, the seat of California's Sonoma County. You'll know it by the Charlie Brown statue in front. And the courtyard containing both a birdbath (hello, Woodstock!) and a kite-eating tree. And the "Psychatric Help 5 Cents" booth once you walk in.

On the upper floor, you can stroll through the life of "Sparky," as everyone called Schulz. There's a replication of his studio, a nursery wall that he painted for his daughter in 1951, a timeline of his life, and an exhibition of the comics that influenced him as a child. On the main floor, you can find classic "Peanuts" strips, storyboards, and animation cells.

Two artistic creations in the Great Hall, both designed by Yoshiteru Otani, are particular delights. One is Morphing Snoopy, a relief wood sculpture that shows the evolution of Charlie Brown's pooch over the years (hint: He started out much more traditionally dog-like). The other is a mural composed of 3,598 ceramic tiles re-creating about ten years worth of "Peanuts" comic strips. Combined, they form a large image: Lucy holding a football for Charlie Brown.