This story is by Abby Holcombe -- daughter of Winnebago ambassadors Peter & Kathy, road-schooled teen, and amazingly talented kayaker. Wondering what a life of full-time RVing and travel adventure can look like for a kid? Check out this exciting example.

The Magpie River is a remote section of river that twists and turns through the Northern Quebec wilderness and is full of big waves, holes, and outstanding waterfalls that we portage our kayaks and gear around. This river isn't super popular and is floated by few since it requires a helicopter or float plane just to get to the put-in at Lac Magpie. I honestly hadn't heard of the Magpie until Jez Jezz emailed me about his company, Explore Expeditions, which was leading a trip down the secluded Magpie River. 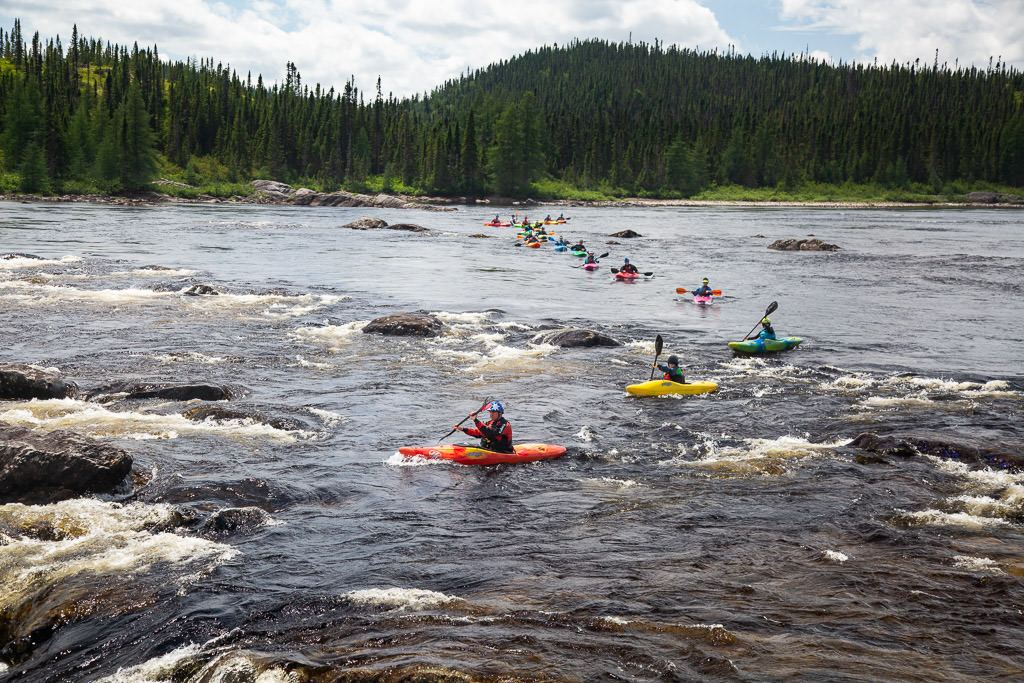 For the next six months, the Magpie River was all my parents heard about and I eagerly counted down the days until my dad, Peter, and I would road trip from Cascade, Idaho, to Quebec City, Quebec, where we would meet with the rest of the crew! After months of anticipation, we finally hit the road and after 2,634 miles and 56 hours in the car, we eagerly arrived in Quebec City.

The group consisted of 15 boys ranging from 12-18 years old with varying kayaking abilities, two kayak guides; Jez Jezz and Tay Tay, two rafts guides; Ty and Julian, and my dad, Peter, who was in charge of photographing our adventure. I was the only girl on the trip, but was keen for this incredible opportunity of kayaking and meeting new kids who are equally as passionate as I am about paddling!

After introductions around a campfire, we all went back to our tents to rest up for the days to come. We awoke the next morning to eggs and bacon made by Julian, one of the guides. We feasted and got to know one another a little bit better as we all swapped stories in between bites. Shortly after breakfast, we had a quick chat about the chores we would need to rotate through during our trip. 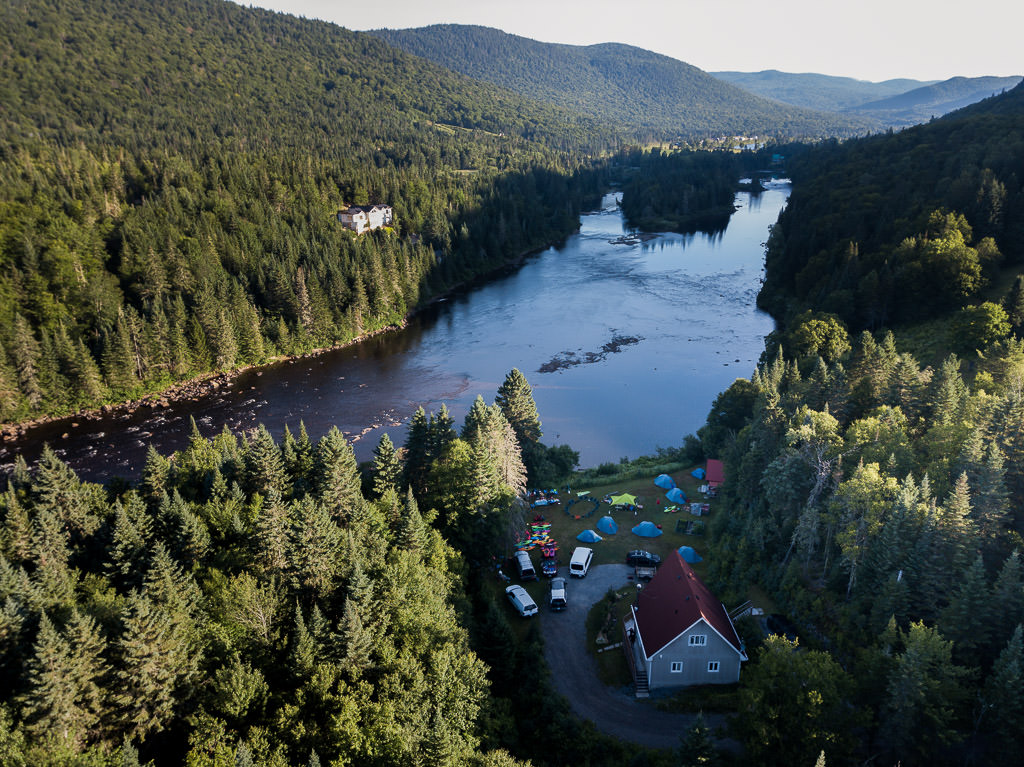 Since it was just Julian and Ty with our team of 18, the kids split into three teams where they would rotate through cooking, water, and toilet duties. After chores, we loaded into the van for a 12-hour drive up to Sept-les, Quebec, which took us the span of two days.

Before we could set up camp, we had a quick detour to weigh in our gear, personal bags, and body weights in order to calculate how many trips the helicopter would need to take to get all of us, and our gear, to Lac Magpie. After everyone and their personal belongings were weighed, we jumped back in the car for the remaining hour-long drive to the campground.

We were planning on waking up early the next morning and driving to meet the helicopter. But unfortunately, due to weather, the helicopter pilot felt uncomfortable flying in our weather conditions which meant that we got to kill time at the campground all day which was when the whole group really became close. In between naps in the van, exploring the beach, and lollygagging around the playground, we kept ourselves busy. 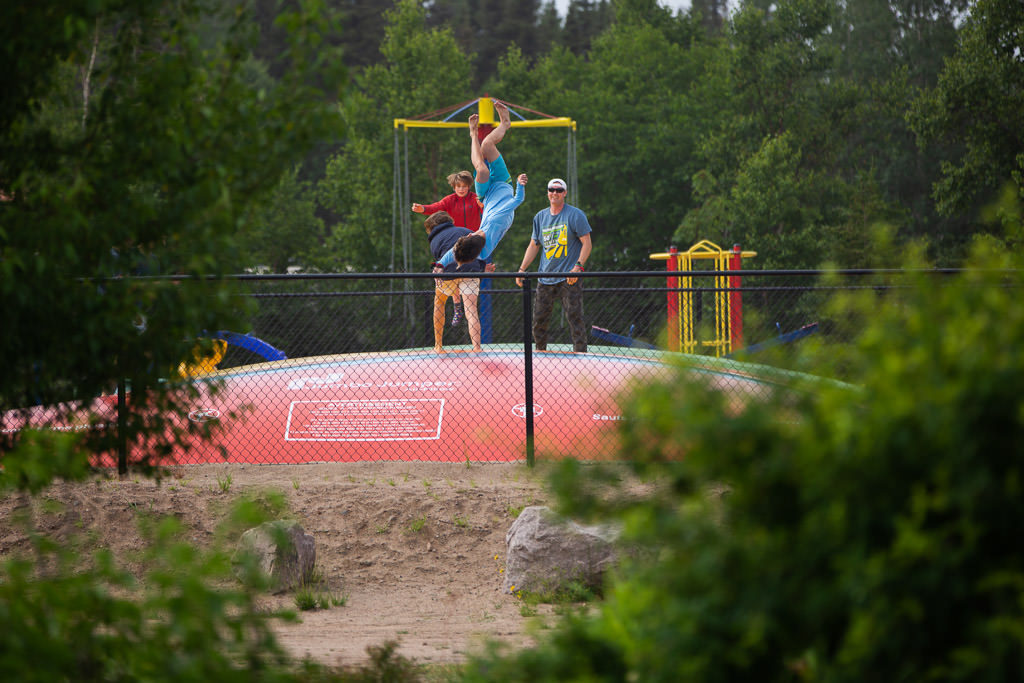 Getting on the Water

Luckily, the next morning we awoke early to clear skies and were able to fly out. I was incredibly nervous about the helicopter journey as I am really scared of commercial planes and wasn't quite sure how I felt about flying in a helicopter. The pilot told me to sit shotgun and after 30 seconds in the air, I fell in love. Unlike many of the other kids who were flown in earlier from further upstream, the five of us who were waiting at the takeout got an extended 20-minute flight over the Magpie River. 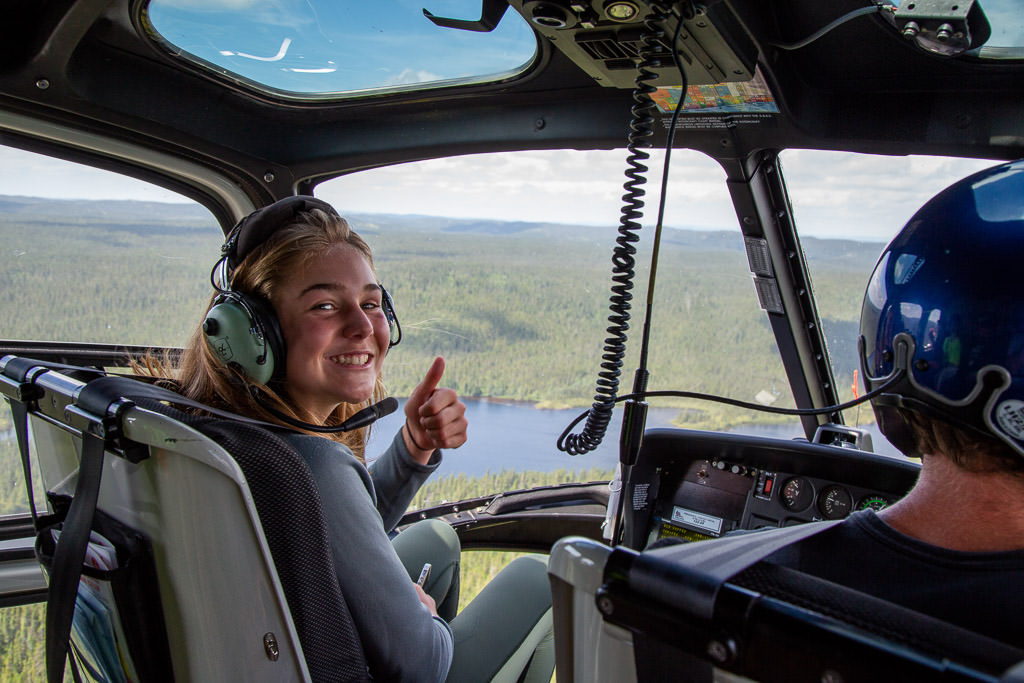 I had never experienced a river from the perspective that the helicopter provided, but I was in awe of the pure harmony of Magpie Falls, the extent of tremendous features of the Gorge, and all the other smaller rapids in between. In the blink of an eye, we were at Lac Magpie and could see the 19 kayaks lined up on shore as well as the two rafts over-flowing with our food and gear for the next five days of backcountry living. I looked down to see all the boys waving up at us eagerly waiting to share pictures and videos from their helicopter ride and to see our pictures and videos of Magpie Falls and the Gorge, two of the major portages we would have in the coming days. 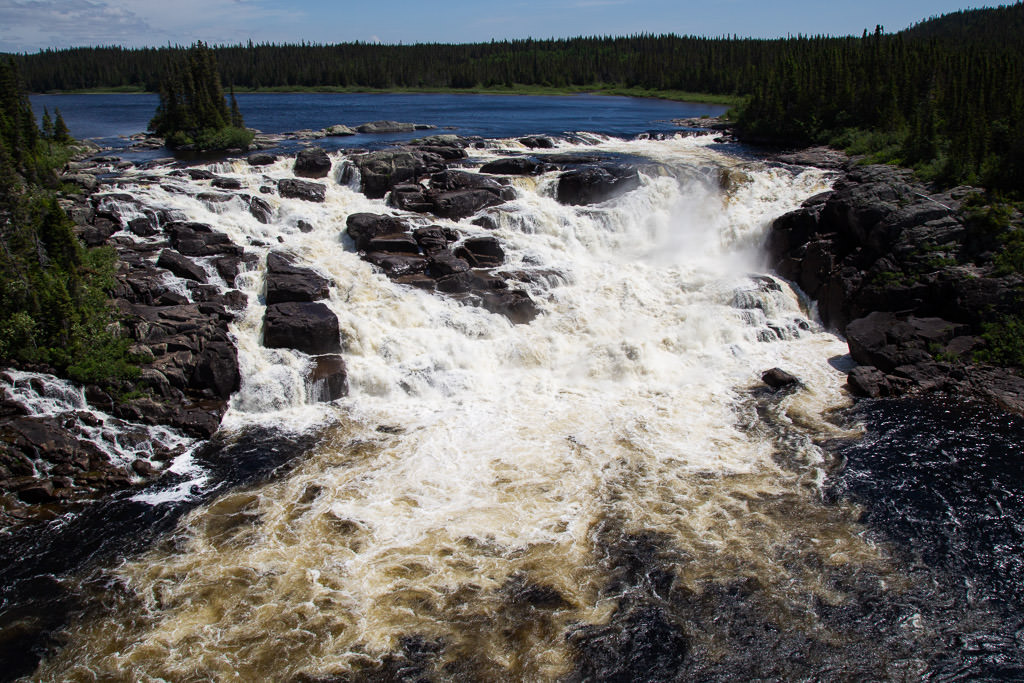 We all quietly watched the helicopter fly off into the distance and, at that moment, I realized how far away we actually were from civilization. There was this period of silence after that where I could tell everyone else was just as humbled by this as I was. To further demonstrate how isolated we were, in those couple seconds of silence you could no longer hear anything besides the occasional chirp of a bird, the wind sweeping the trees, or the faint roar from the rapids downstream. The moment of silence broke with Jez instructing everyone to gear up and start progressing downstream. 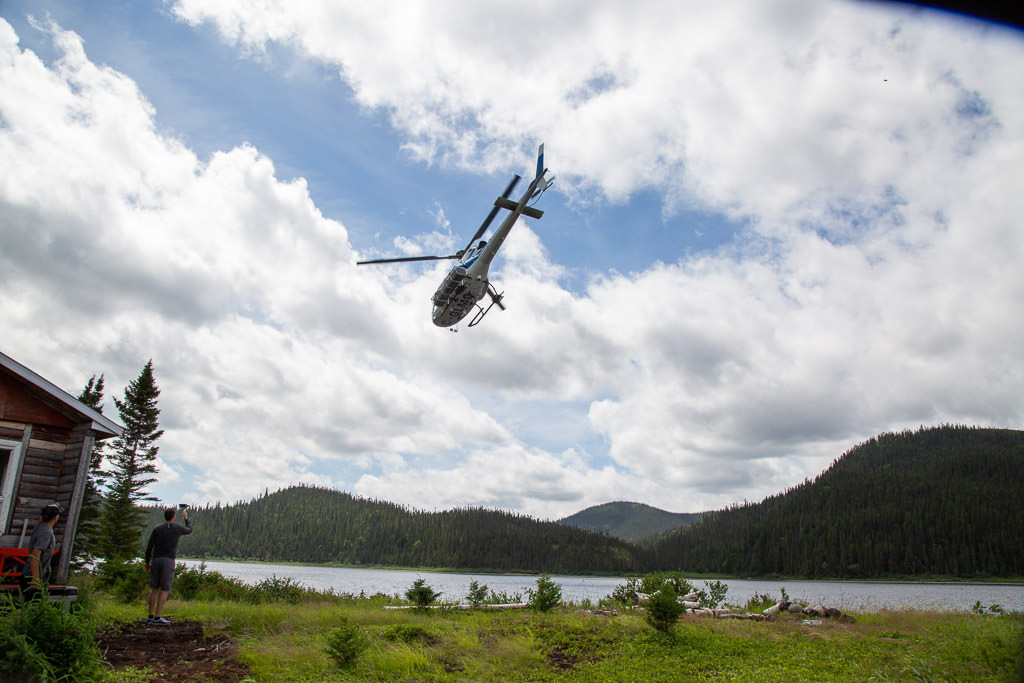 After a short paddle on Lac Magpie, we were finally progressing downstream and to our camp. After several class 3-4 rapids with big wave-trains, holes, and an endless surplus of surf waves and seam lines perfect for enders, squirts, and the occasional loop, we found ourselves at the last rapid before we eddied-out and set up camp. This was the biggest rapid yet, but still manageable with only a couple of holes to dodge. 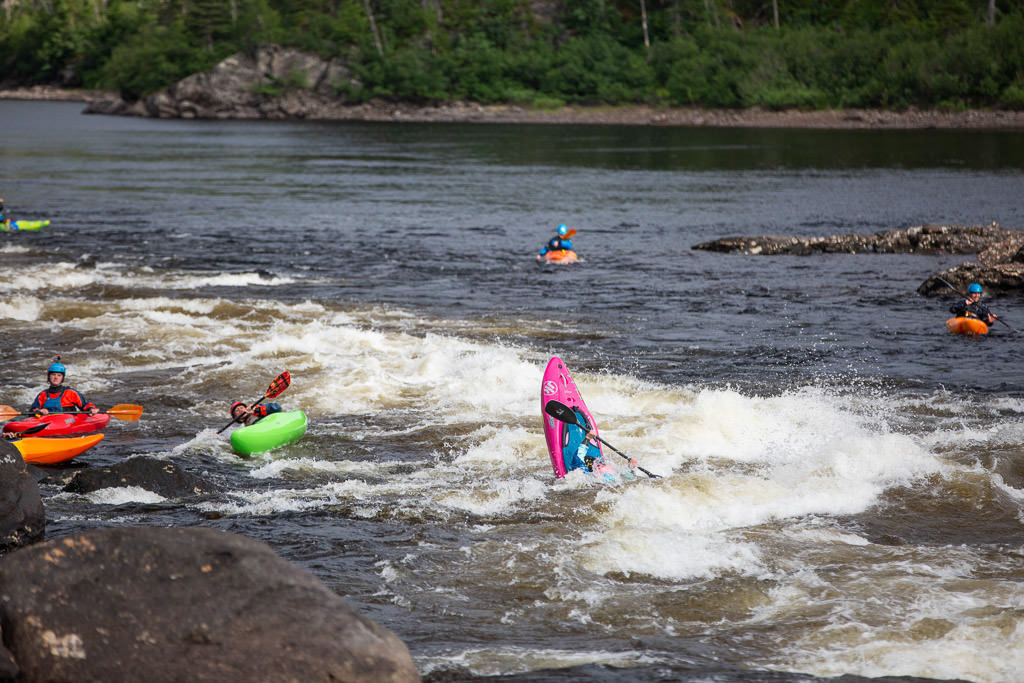 I had a blast navigating my way through the holes and into the immense wavetrain! I was one of the first of the group to run this rapid which meant I had lots of time to ferry and squirt while I waited for the rest of the group to make their way down. After an hour or so, we set up camp and enjoyed our first night on the river! 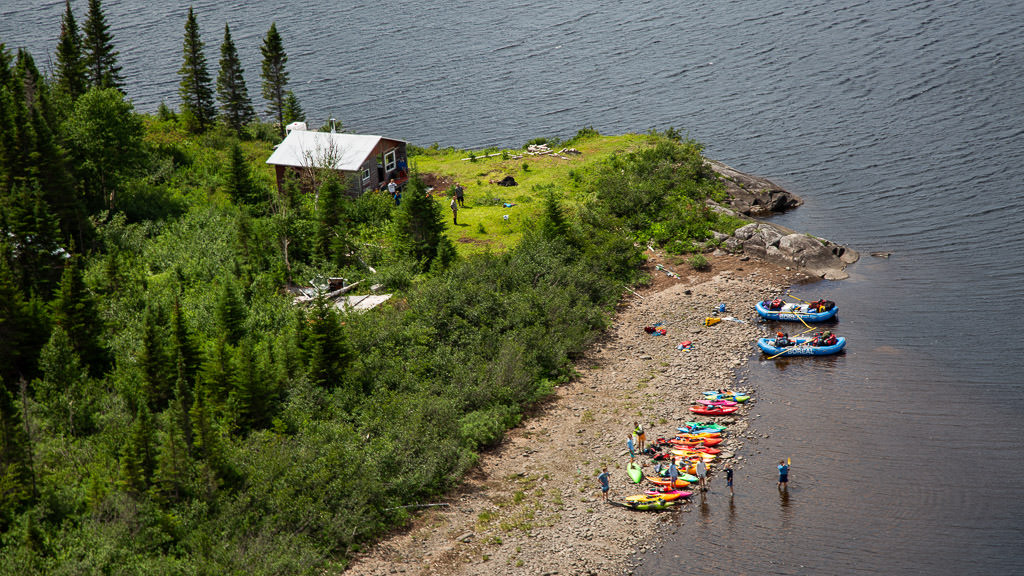 Life on the River

The next morning, we awoke to raindrops on our tarps as we made our way to breakfast. Quickly after breakfast, we took down our tents and hammocks and geared up for the river. Jez explained that a couple of miles downstream, we would have the first rapid where we would need to line the rafts down.

Many of the rapids on the Magpie are un-runnable due to large holes and decent-sized waterfalls and ledges that land on sharp and unyielding rocks. Luckily, we were able to line the rafts down many of these rapids which made it much easier than having to load and unload the rafts and carry the gear around. To line the rafts down, we would tie a rope to the bow and stern of the raft and pull it off the ledges and through big holes. With the bow and stern lines, we could control the raft and put it where we wanted it to go, so we could successfully maneuver it down the rapid. This particular rapid was a sweet one runnable by kayak, but dangerous in a raft. 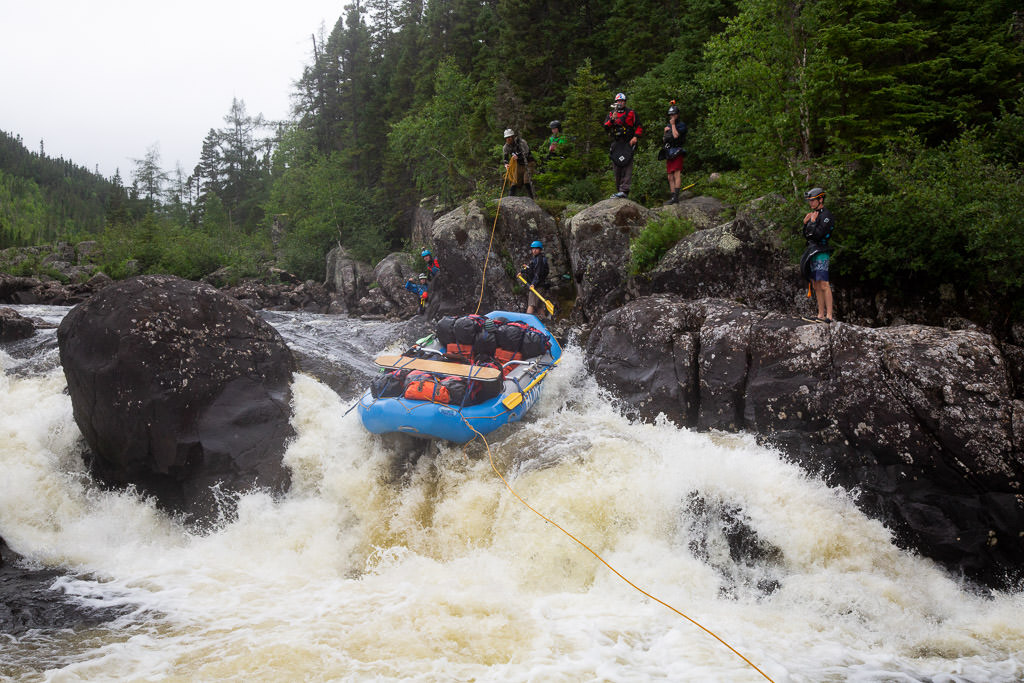 The following day, the river was painted with fog as we peacefully paddled across the smooth, glassy water that made up the flat stretch. After an hour or so full of talking, giggles, and singing, we arrived at Trust Falls. The guides instructed everyone to eddy out, however, instead of giving us the beta for the rapid they explained that we would be trusting our skills to read the river and paddle over this roaring horizon line known as Trust Falls. 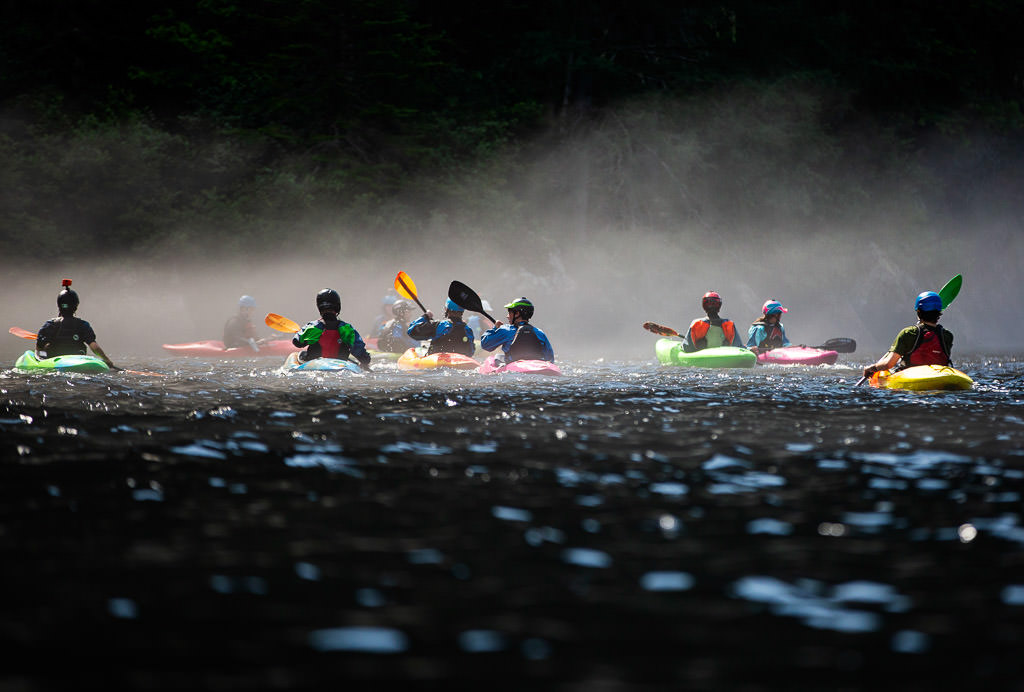 We were instructed to run this rapid one at a time. As we watched each kayaker drop below the horizon, we could see Jez hoot and holler and jump with joy watching every-one run the rapid. But we had no idea what to expect. Finally, it was my turn and with each paddle stroke I took, I became more curious about the rapid in front of me. When I finally caught sight of the rapid, I could see a gigantic lateral wave leading into a smaller wave train. While the rapid itself was a blast, my favorite part about Trust Falls was getting out on shore after the rapid and walking back up to see everyone else's reaction as they dropped into the beast. 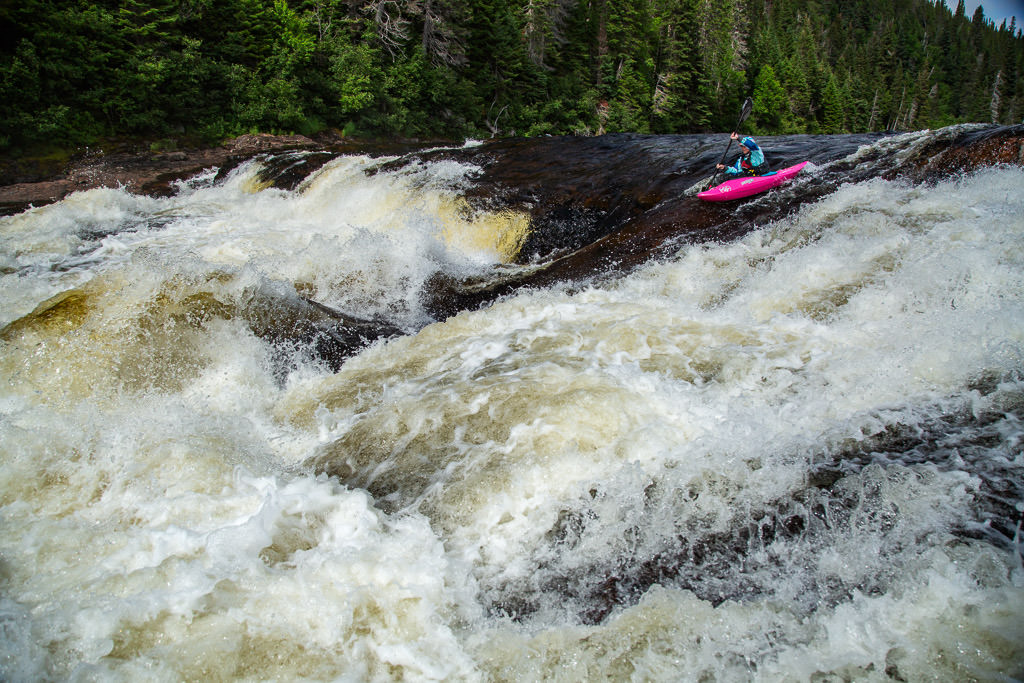 Once everyone made it through, we continued downstream to our final camp for the trip, the Gorge. The Gorge in an un-runnable section of whitewater filled with man-eating holes and house-sized waves. The gorge itself was half a mile long. We got out in a shoe-stealing mud bog that was knee high in places. From there we carried our boats a third of the way down balmy, mosquito-infested, mud-covered trails. We then walked back to unload the rafts and bring our gear bags and kitchen supplies to our camp for the night. 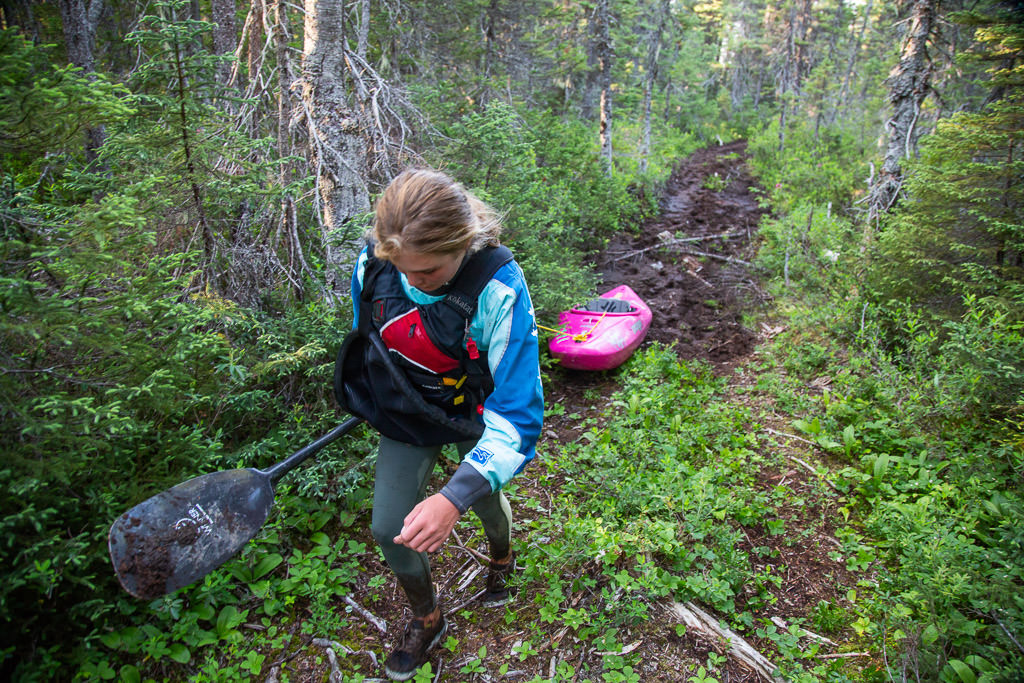 Next, we grabbed our boats and tromped our way back through the mud and bugs to the end of the portage where we had left our boats and kayak gear and headed back to set up camp. The Gorge was an amazing place to camp, especially because we were right on the edge overlooking two of the significant rapids within the Gorge. After dinner and brownies around a campfire, we all hit the sack. 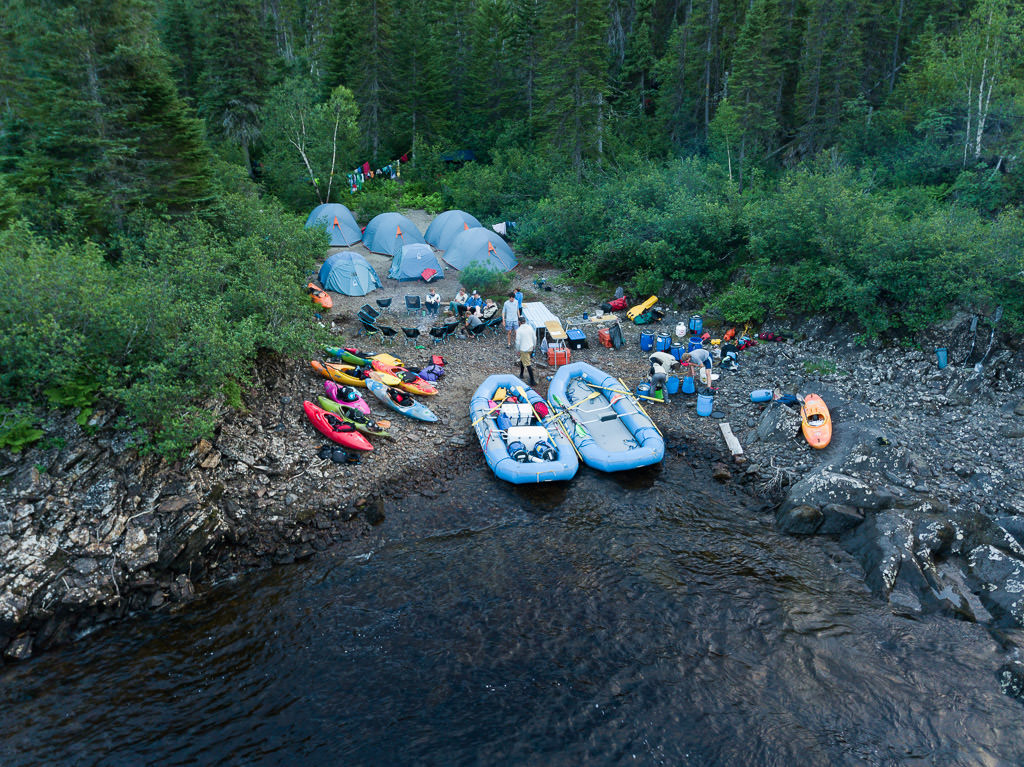 The next morning, we were surprised with the helicopter coming to pick up the two rafts and all of our camping and personal equipment which they brought to the takeout. Once the helicopter carried our stuff off into the distance, we walked down to our boats and put on for our last day on the Magpie River. 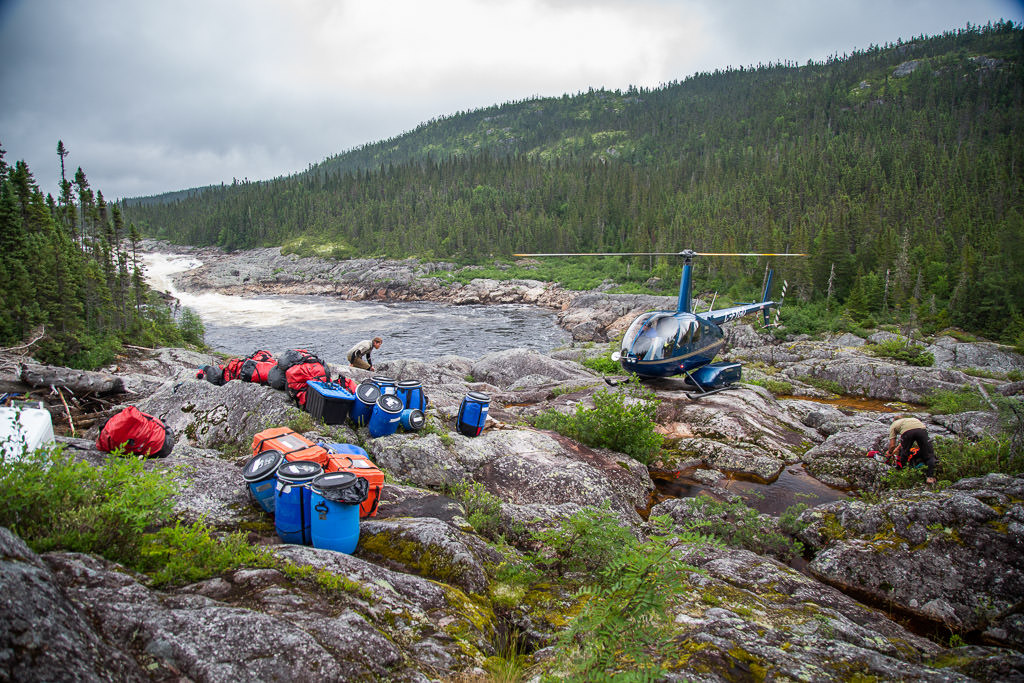 After a long flat stretch, we arrived at the majestic, yet deadly, Magpie Falls. This was the last portage for the group. Once the whole group made it to the end of the portage, we walked up the trail a bit to take in the spectacular views and snap a few pictures. Later on, we continued downstream and - before we knew it - all 19 of us were piling into the vans exhausted, smelling like the river, bug spray, and body odor, but with the biggest smiles ever. I am so thankful I got the incredible opportunity to experience the true beauty and power the Magpie River has to offer. 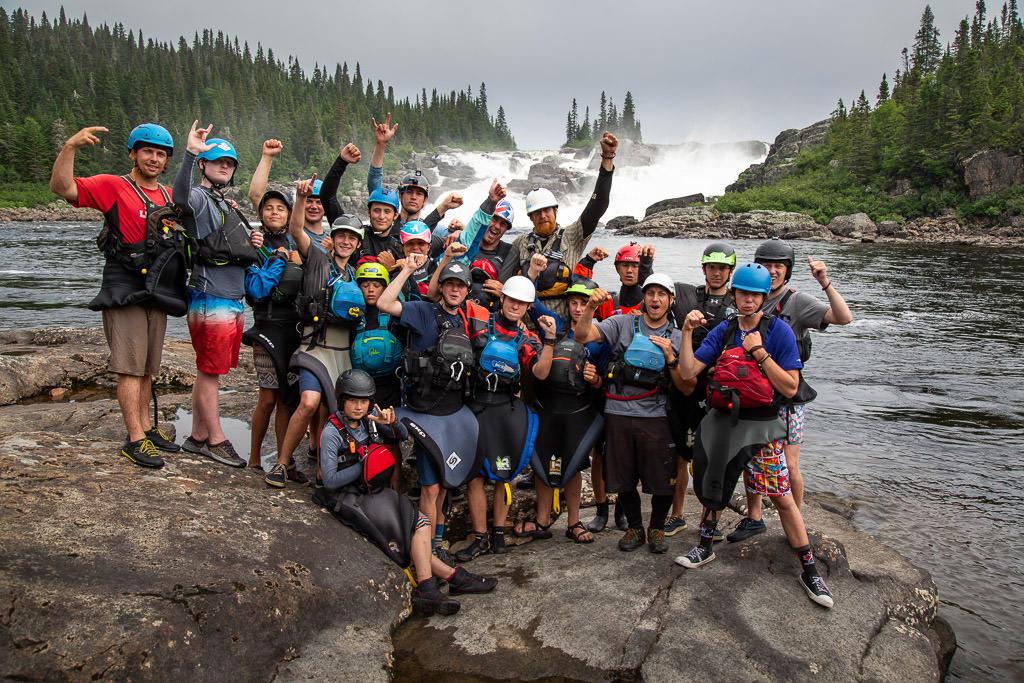