Our guide Ken said that in a TV interview in the 1950's, when Frank Lloyd Wright was asked what his favorite project was he answered, "The next one."

Today Wright's work is both revered and, in many ways, taken for granted. We tend to forget the period of uncertainty and discomfort when artists spring new ideas into the world. It takes time to come around. Art critic, Robert Hughes called it "The Shock of the New." Like great artists, Wright's vision developed over time. By the time the Kaufman family (who owned a large department store in Pittsburgh) asked Wright to design a vacation home in a wild and hilly valley about 90 minutes south of the city, Wright's reputation was solidified, but stalled.

In a narrow, densely forested drainage, called a "run" in that part of the country, Wright was handed an assignment that must have been like pouring lighter fluid on glowing creative coals. Wright was deeply motivated by the idea of organic architecture and what a gift to design a hillside home near a waterfall. Hell, why not build it right over the waterfall?

A few weeks earlier we had toured one of America's true palaces, the Vanderbilt Biltmore House in Asheville, North Carolina. Now, standing in front of the stacked linearity of Fallingwater in Mill Run, Pennsylvania which one would I pick to live in? I'll take Frank's place -- in a heartbeat.

And as we walked down the boardwalks and gravel path from the covered open air octagonal visitor's center to meet Ken the tour guide outside the house, the heartbeat did quicken at the sight of this stunning modernist sculpture, now seventy plus years old and yet brilliantly contemporary. It elicited a feeling of "Wow! we're really here." For getting to Fallingwater is a commitment that truly takes you off the beaten path. And I'm sure that's the seclusion the Kaufmans wanted. Unlike Vanderbilt who clearly decided to show off, I doubt the Kaufmans were ever looking for such visibility. But like Vanderbilt's relationship with his architect, Hunt, the Kaufman's partnership with Wright is one of the rare gifts artists get when their client allows them to stretch thinking beyond preconceived notion. 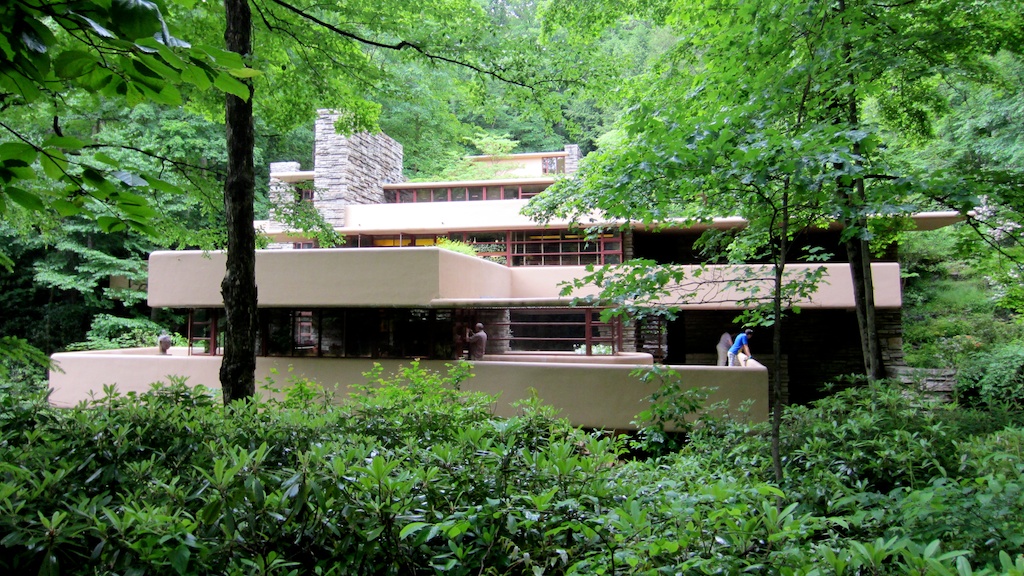 The signature quirks of Wright's design touches are quickly evident starting with the small single entry door, lower ceilings (the Kaufmans apparently were only average in height), horizontal windows, and built-in furniture. It's clear that Wright thought deeply about livability, flow, views and ventilation. Behind all this stylish design was some pretty novel engineering fusing steel reinforced concrete, wood and stone together. 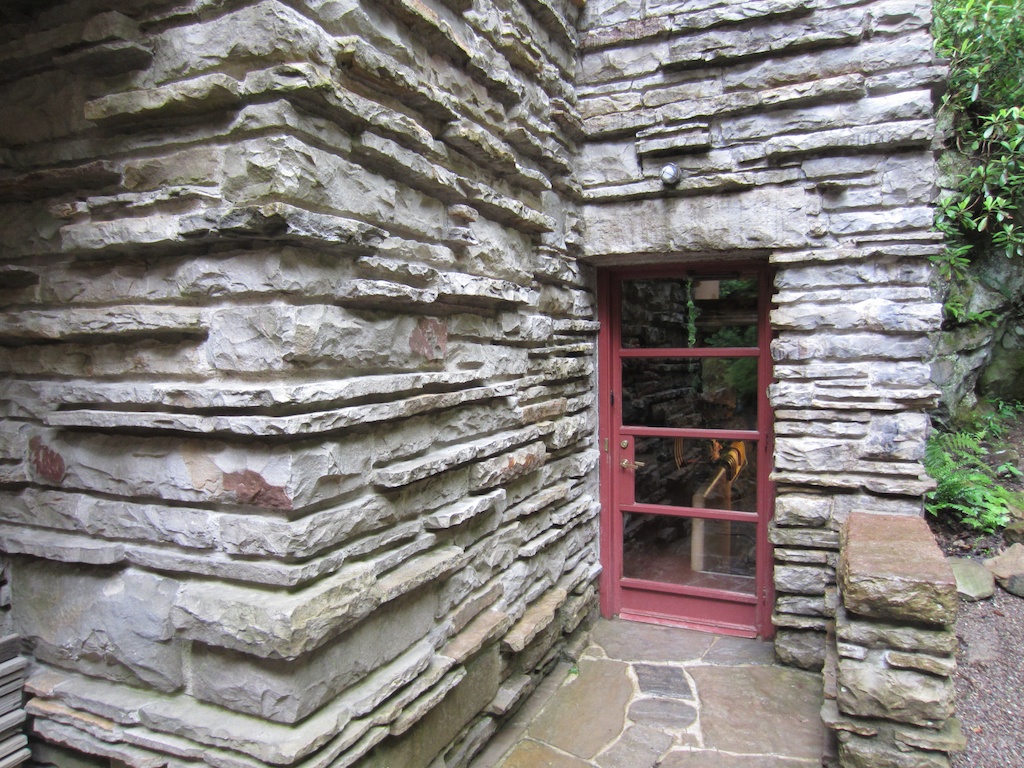 It was a rainy afternoon and clearly a familiar weather pattern as baskets of Fallingwater logoed umbrellas were strategically placed outside on the the home's various terraces for us to use. The guide pointed out that on days like today "there are two waterfalls -- the one the house is built over and the one pouring off the roof." The guide also wryly observed that, "Like many Wright houses, it also leaks." What struck me, as our group of ten toured all the hallways and stairs leading up to three different levels, was that I never thought about who might have walked these polished natural stone floors before me, but instead how cool it would be to live here. I guess that's the ultimate accolade.

From what Ken said it sounded like the house went seven times over the Kaufman's initial budget. And, in a much smaller, more personal way, we know that same "mission creep" experience as one thing tends to lead to another and suddenly you've spent two to three times more than you anticipated. Cutting edge architecture is much closer to art than it is to engineering and, having a reasonable degree of experience being in and around luxury homes, I could see the inevitable mix of well thought out livability solutions and errant design risks.

What I hadn't been prepared for was the deja vu feeling I had upon entering the home's small study. When I was in elementary school I loved going four blocks over to play at Pete Hornbein's home. I grew up in an 1,100 square foot two bedroom home that my parents bought after WW II. It was one of rows of little brick tract homes in east Denver. Pete's dad, Victor Hornbein, was an architect who designed and built two homes on unusually large lots. As a young boy of eight I didn't understand or care about lofty architectural principles, but something in the Hornbein's house felt marvelously different. The clerestory windows, expanses of exterior glass looking into landscaped courtyards, and an outside covered walkway to Victor's glass-wrapped home office -- something I pine for to this day -- are as vividly real to me fifty years later. The light would change throughout the day from bright to indirect and though I was only in that house perhaps a dozen times as a child I can close my eyes and still feel how I felt as I walked through it. THAT is what great residential architecture is. 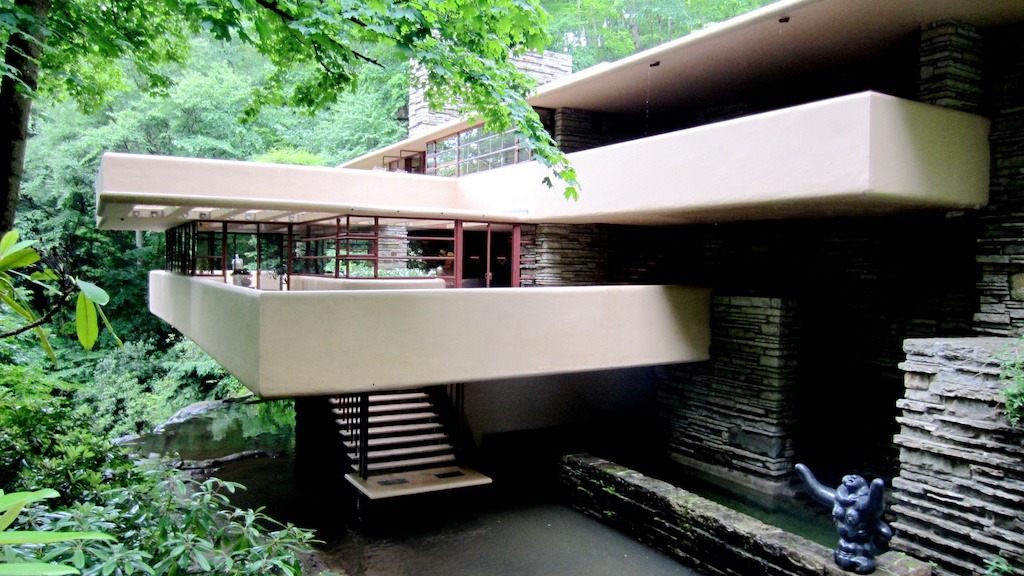 Standing inside that study in Fallingwater I could now see the deep effect that Wright had on architects, like Victor Hornbein, who came into the profession at the most persuasive point of Wright's career. And, among Hornbein's works, it's now his iconic design of the Denver Botanic Gardens that, like Wright's many buildings, continues to provide functional pleasure.

The tour concluded further up the hillside where a brilliant stair stepped arc covered an inclined walkway that led to the guest house. The guest house was added three years later and, while fully consistent with the design of the main house, it had a slightly different and, what I would describe, "better" feel. Not surprisingly, the addition was designed by Wright's associates who, as is often the case, soften the edges of a master's riskier creativity.

I have been very fortunate to visit and tour through many wonderful homes throughout America from, urban lofts to $20 million dollar mountain hideaways. But, as it should, Fallingwater belongs in it's own special category, for it is the rare achievement that provides both pleasure and inspiration to all who visit.

RV tip: Fallingwater is off of Pennsylvania 381 which is a scenic and winding two lane road, but manageable with a big rig. There is well marked parking for RVs and busses that's a short walk to the visitor's center. You can purchase tickets ahead of time and learn more about the tour and programs by clicking here.