Each year, the best whitewater kayakers converge in the Ottawa Valley near Forresters Falls, Ontario to train on the world class whitewater of the Ottawa River. The water is warm, the rapids are monstrous and the scenery is lush. For all these reasons, this fall we found ourselves crossing the border to train with the world's top paddlers, but what we found between the rapids of the Ottawa turned out to be the highlight of our foray into the Great White North. 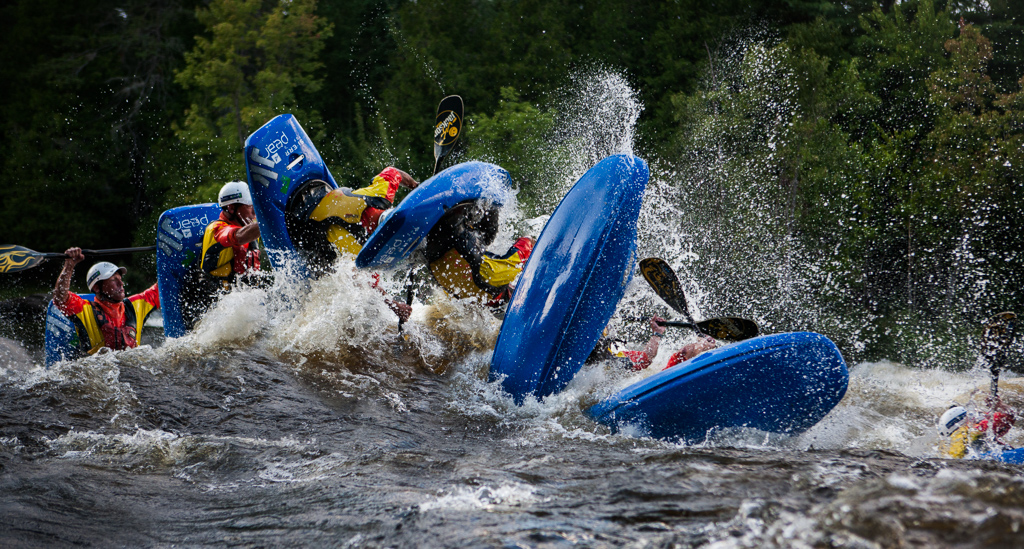 Our first adventure on the river was filled with long, lake-like sections punctuated periodically by gargantuan rapids. A typical whitewater section started with a muffled roar in the distance that grew in volume as we approached, until a line appeared on the horizon of the river where the water seemed to disappear into oblivion. As we inched closer to the impending drop, the calm green water morphed into a churning goliath of white chaos. For Abby and I, some of the rapids seemed impossible at first glance, but our friend and world champion freestyle kayaker, Emily Jackson, helped us find navigable paths through the turbulent chaos. Peter often chose his own line embracing the power and magnitude of the rapids. At the bottom, the river calmed again into a green pool, and we regrouped to share our individual experiences through the colossal whitewater. The Ottawa river proved to be a fantastic playground that challenged all three of us at very different ability levels. 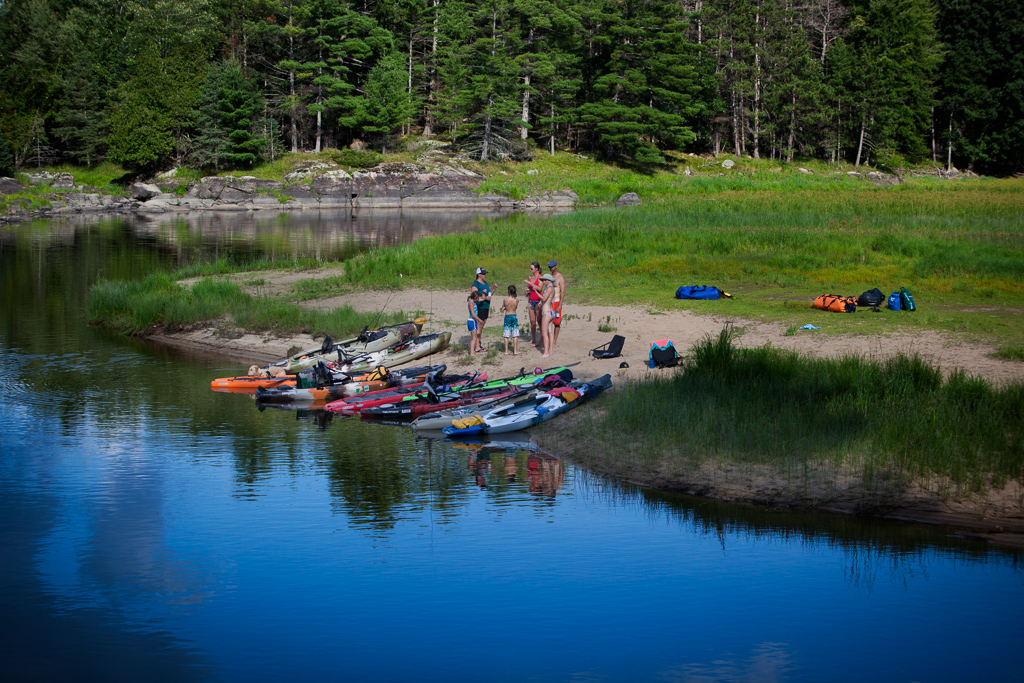 A few days later we met up with a local family of four, the McBeaths, for an entirely different Ottawa experience. We were surprised when they instructed us to ditch the whitewater boats and pack up our fishing kayaks for an overnight river adventure. We loaded up the sit on top boats with tents and sleeping bags, kids and dog and a small arsenal of fishing rods and set out again into the green water; this time focusing on the calm water between the rapids. At the onset of our journey and before we even had all the boats in the water, the youngest McBeath, Sam (age 11), shouts "Fish on!" and proceeds to land a 30 inch pike. This immediately increased our excitement and anticipation for what was to come over the next two days. 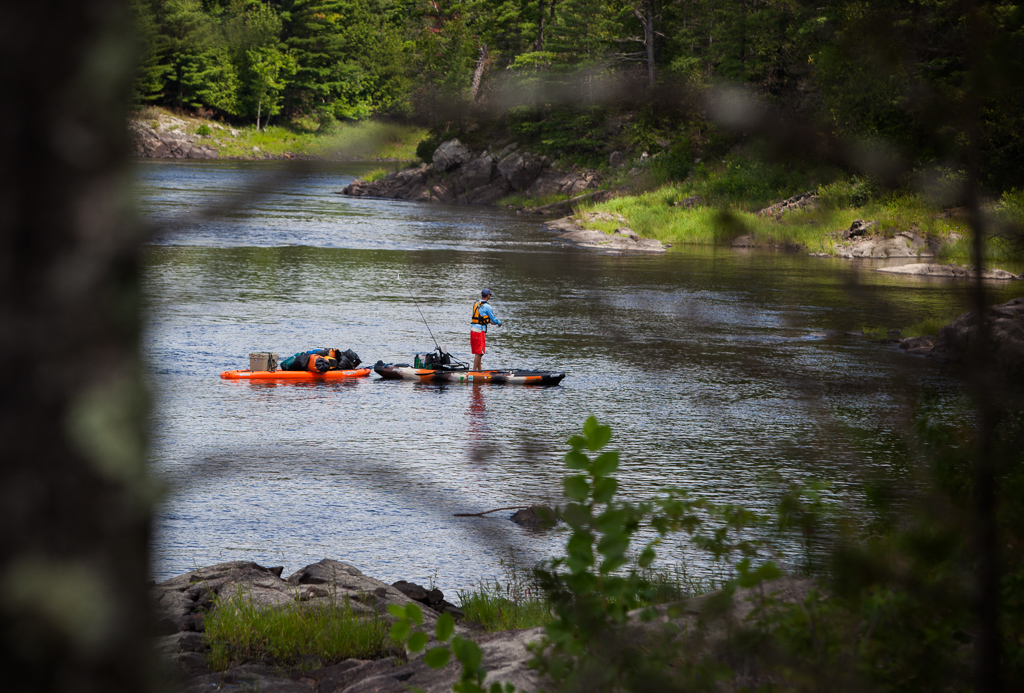 We took our time navigating previously overlooked, lake-like sections of the river intent on exploring every nook and cranny on a quest for pike, walleye and bass. Instead of relying on our ears to detect the roar of rapids in the distance, we focused our eyes on the shoreline scanning for the perfect, fishy spot to cast our line. Abby and Sam, the two youngest of our group often led the way down the river, at times disappearing into the distance leaving behind only the echo of their laughter and endless chatter as a clue to their whereabouts. The leisurely pace of our journey allowed us to intermittently drift apart and fish independently or paddle side by side swapping stories of adventures past. 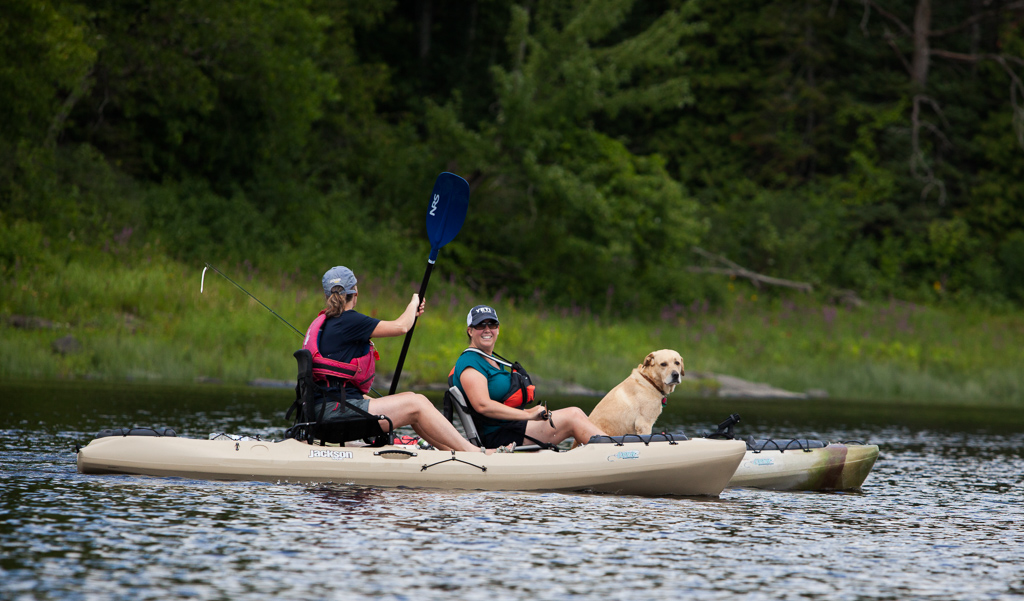 Sometime in the middle of the afternoon, James - the instigator of this adventure, led us into a bay that appeared to be a dead end, but upon further inspection turned out to end at a small land bridge hiding a seldom visited section of the river. We formed an assembly line of hands and shuttled boat after boat over the narrow strip of rock until we were all afloat again in a secret, land-locked lake, which turned out to be a fishing haven. We immediately scattered to the far ends of the lake connected to each other only through the steady cry of "fish on!" reverberating from every direction. After an hour of non-stop action, my arms ached from reeling in so many fish and I harnessed my rod and set out to find the rest of my family across the lake. I meandered through a narrow channel near the outlet of the lake, navigating house sized boulders with the sound of Abby and Peter talking in the distance as my guide. 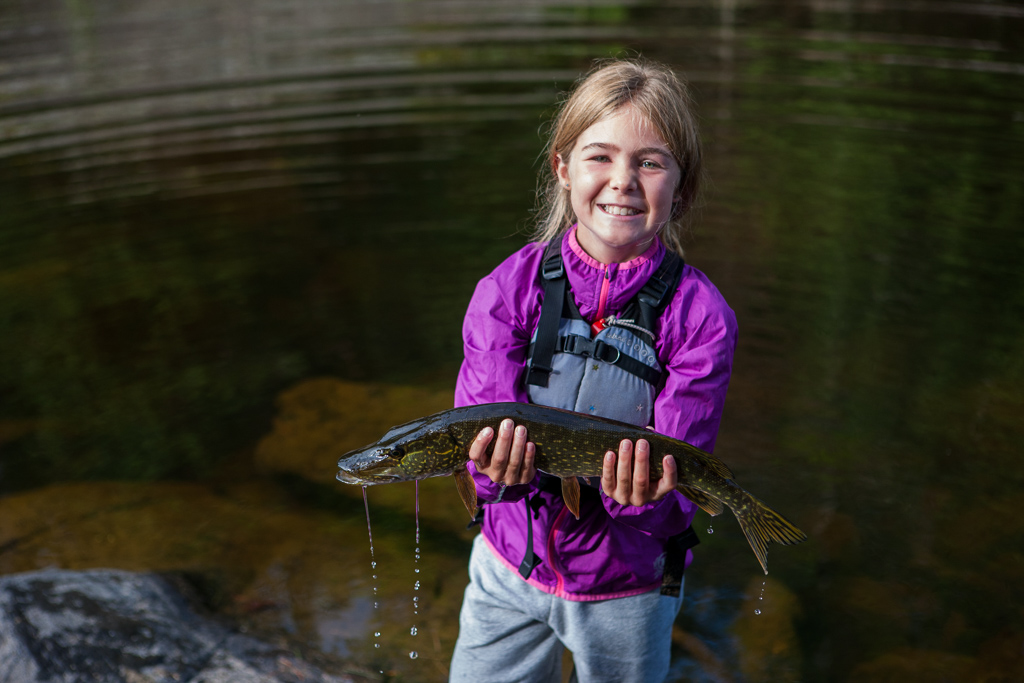 I rounded a corner to find their boats beached at the base of a small cliff, and scrambled to the top just in time to see Abby land a 24" pike. Her sparkle and excitement of reeling in and unhooking such a monster by herself is my favorite memory from our time on the Ottawa. After thoroughly admiring her catch, we returned to a small island in the middle of the lake to setup camp, cook dinner and enjoy an evening around the campfire. 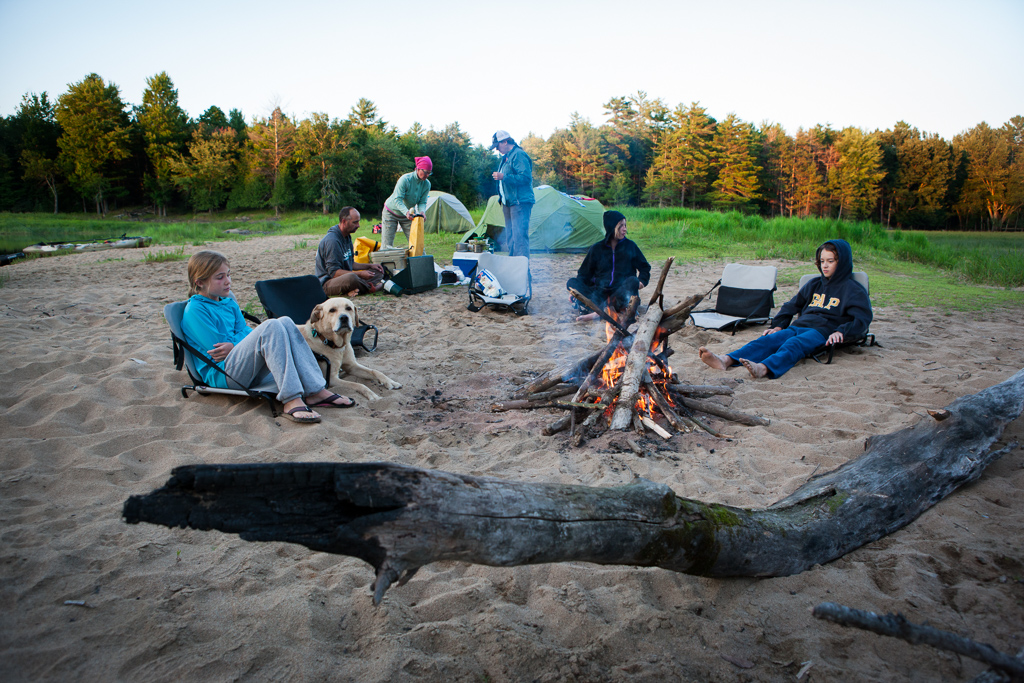 There is something magical about time spent around a campfire. I'm not sure if it is the hypnotic flames, the comfort of the warm embers protecting against the cold night, or simply the lingering pace of a lovely evening with great friends. But as all great things must end, the campfire eventually dwindled, the stars appeared in an impressive display, and with heavy eyes we finally drifted off to dreamland. 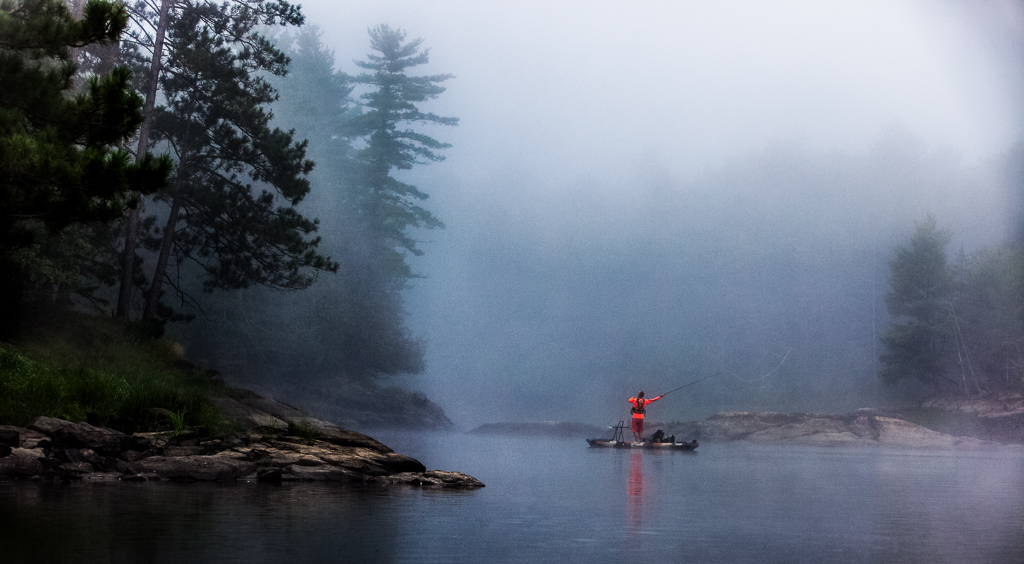 The next morning, I woke just before dawn with a plan to slip out before the others for the best fishing of the morning. I stepped out of the tent into a fog so thick that the lake, only twenty feet away, was completely concealed from view. But, before I even made it down to the water, I heard Peter and James racing to catch up with me - so much for being the early bird. We quietly slid the three kayaks into the glassy water and set out into the dense fog. My first cast was rewarded with a 20" pike and on subsequent casts landed a dozen more fish. Within what seemed mere minutes, we could hear the kids voices echoing across the lake as they paddled out to join us. Before long, and with rumbling stomachs, we returned to the beach for breakfast and to breakdown our camp. We made quick work of loading the boats and were en route back to the portage over the small strip of land that sheltered our secret lake by mid morning. 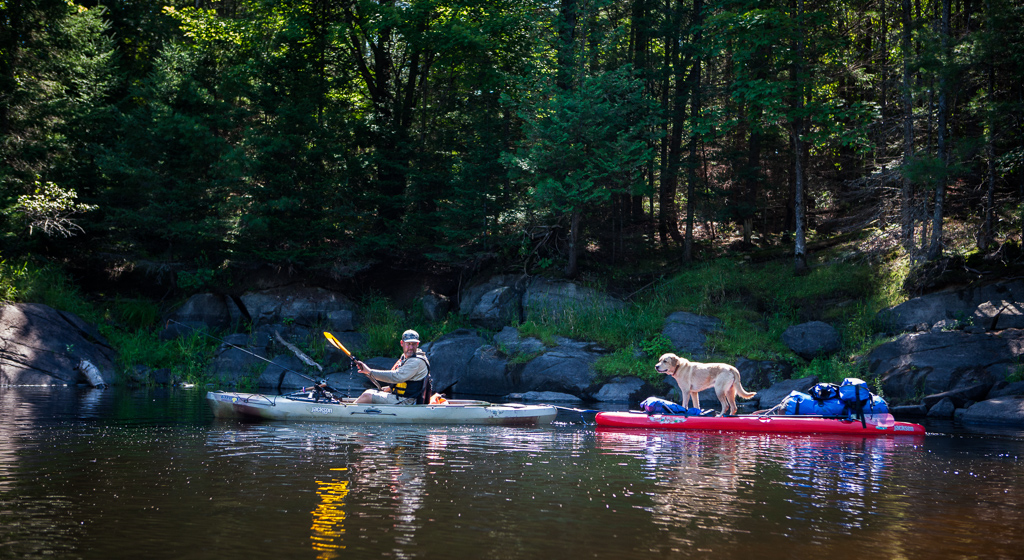 On our return trip we took our time, criss crossing paths and casting lines. The miles drifted by and before long we found ourselves back at our Winnebago: tired, hungry and happy. We had spent months dreaming about our time on the Ottawa River, envisioning what our experiences might be, but we never imagined that the time on the flatwater stretches of river between the rapids would be the source of our favorite memories. It's funny how sometimes it turns out that the best part of a journey turns out to be the unexpected; the moments between the planned and anticipated places and events. It's these experiences, the in-between places, that keep pushing us forward to continue this wonderful life on the road.