Exploring Family Roots in a Winnebago

Editor's Note: Our articles from the Edelmans are often written by Morey and photographed by Ruth. But this time, Ruth took over the keyboard to share a recent RV trip to explore her family's roots (while Morey took on the important role of driver).

With our RV travels across the country, we gain knowledge about geography, history, and cataclysmic events that shaped the landscape, but what about those things that shaped our own lives? As a first generation American, I grew up listening with fascination to the stories my parents told about their young lives in Russia, Germany, and the United States. We didn't travel much when I was a kid -- although when I was eight, we did take a long family trip to Oklahoma and the panhandle of Texas. I still remember our drive on route 66 with no air conditioning, and the occasional giant bug flying into the car, as we traveled with our windows down to catch some cooler air.

Now, many years later, with the perfect exploration vehicle of our own - our Winnebago motorhome, it was time to do some family research during our RV travels.

Finding the Familiar in Oklahoma

Our genealogy research started when we were traveling back home from hiking, biking and camping adventures in the west. I suggested we stop in Okeene, OK, where my mother first arrived after her journey across the Atlantic Ocean -- after all, it was only 104 miles "out of the way." I didn't know what we would find as we turned off the interstate, and I began to question my memory, as this was much hillier country than I remembered.

When we pulled into the heart of town, and the flat plains spread out before me, it all looked familiar. I looked for the buildings that would have been there when my mother came as a teen of 16 in 1928. I saw the name of the bank and recalled my mother had gotten a job for the banker's family and had stayed in contact long after she had married and moved away. 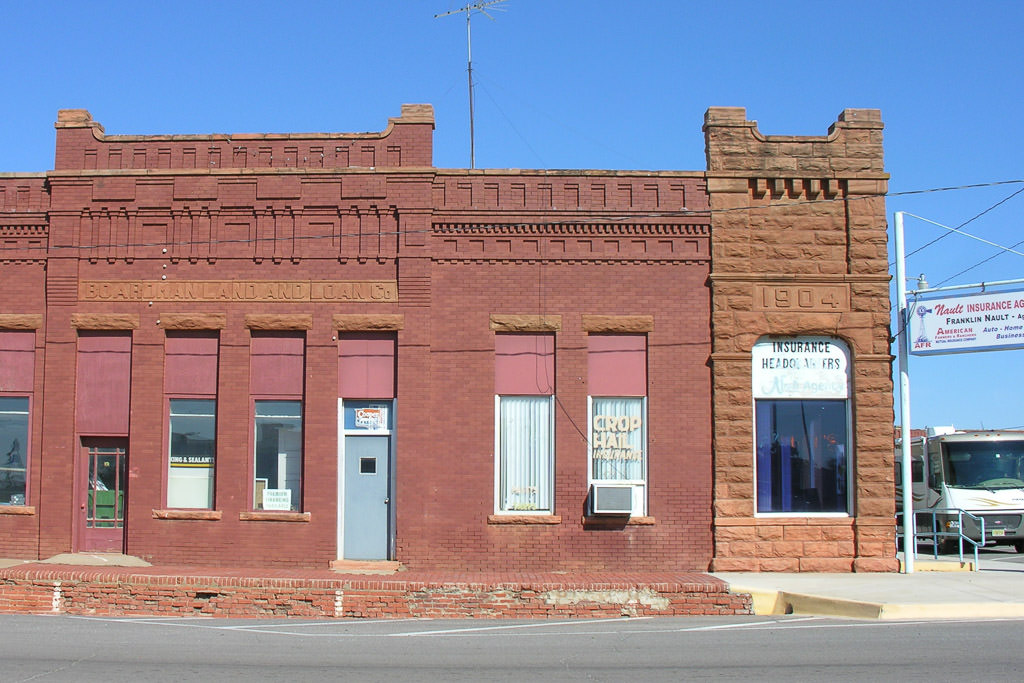 The picture postcards the banker's son used to send of him holding 6-foot-long rattlesnakes came into my mind, when I saw the sign for the Association of Rattlesnake Hunters. Yes, this is still snake country, and Okeene is the home of the oldest rattlesnake hunt in the country!

I wished I had located an address of where my mother had lived. Sadly, I didn't, and we wandered around the area surrounding the downtown with nothing triggering memories. Quite likely, the small wooden home where she lived is long gone.

We decided to head out of town to the cemetery, and there I located graves of an aunt and uncle, as well as names of people I recalled from my mothers' stories of her 18 years here, including the banker and his wife --a beautiful headstone, of course. Somehow, I felt reconnected to my family, and that visit so many years ago to a land unlike any I had ever known growing up in Michigan. 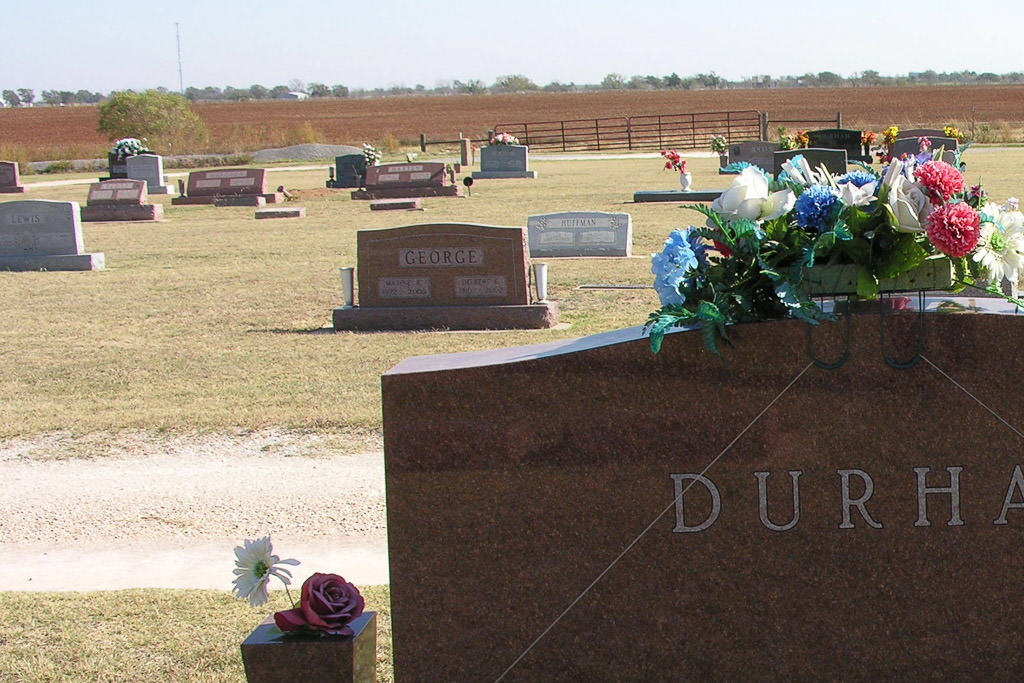 Memories of the 'Old Country' in Nebraska

The following fall, as we headed west again, I did some homework and decided to visit a small museum in Lincoln, NE. The American Historical Society of Germans Born in Russia, sits in a residential area of Lincoln, the city my father had come to right off the ship as a boy of 9, in 1906. The most famous descendant of a German born in Russia, singer/songwriter John Denver, is identified here. How thrilling to find out I shared a common background with the "Rocky Mountain High" singer.

The museum was built in 1998 in the neighborhood where many of the residents from the string of German settlements along the Volga River, had settled. Catherine the Great, Empress of Russia from 1762-1796, had invited the Germans to settle this area in Russia and the museum displayed many of the artifacts from the settlements. 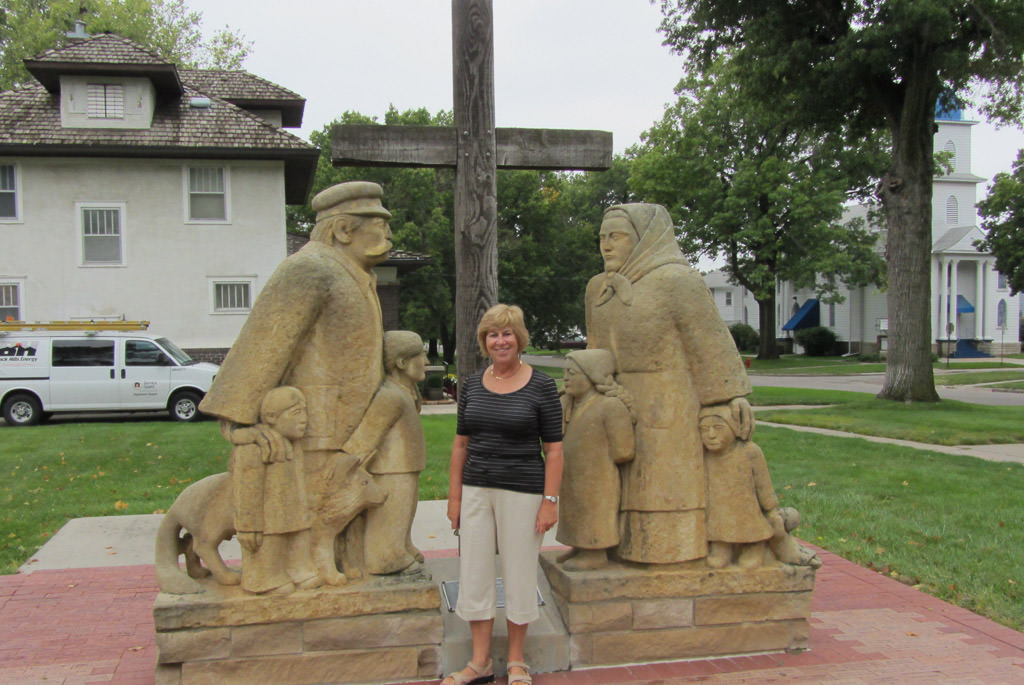 One room contained memoirs and published accounts written by the early settlers and their offspring. I knew the names of both my father's and my mother's villages and was able to open file drawers filled with memories that had been submitted by others. I reviewed some of the stories that were written and compared that to my own oral history.

In one display, there was a wooden spoon -- exactly the same as the one I still had, that had belonged to my father in the "old country." It had a large "bowl" to it and a carved handle. I recalled him telling me how his mother would make one big pot of soup and put it in the middle of the table, and each person would dip their spoon, and then slurp from the spoon until it was time to put in for more. 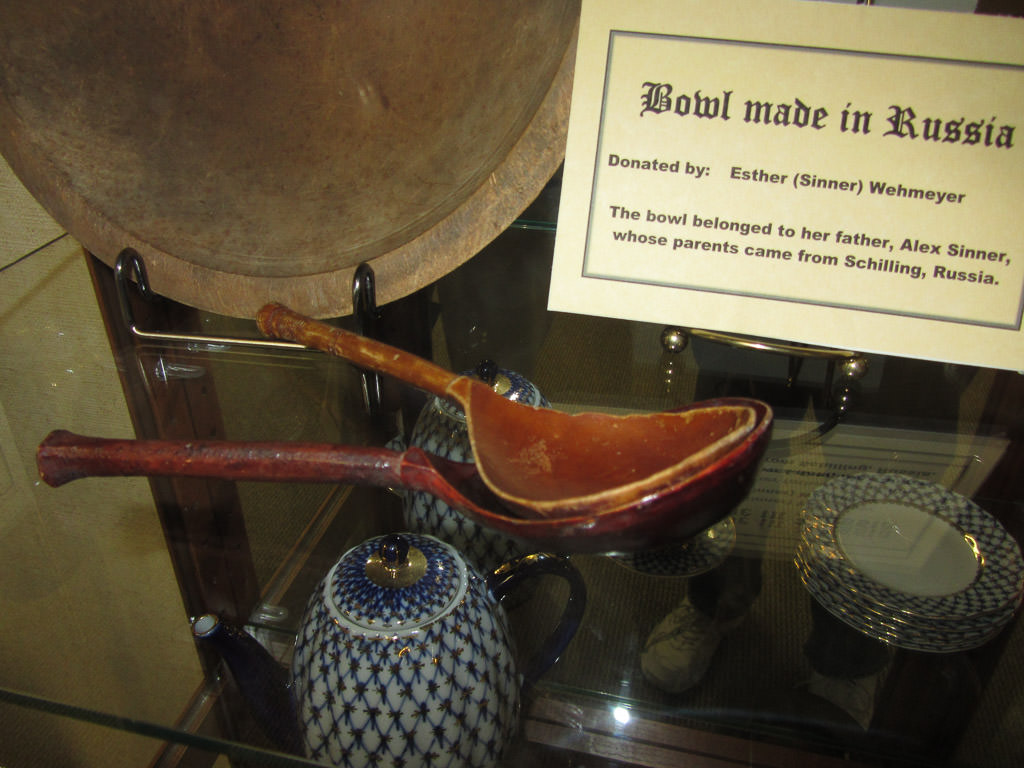 A cart used for picking sugar beets reminded me of my father's stories of his first "job:" hauling the nursing toddlers to the beet fields to their mothers, several times a day. A shawl from Russia, labeled as donated by someone with a familiar name: the wife of the pastor in our town when I was growing up! There was even a book about the settlements of these immigrants in Michigan, and a short history of my church. What a treasure. 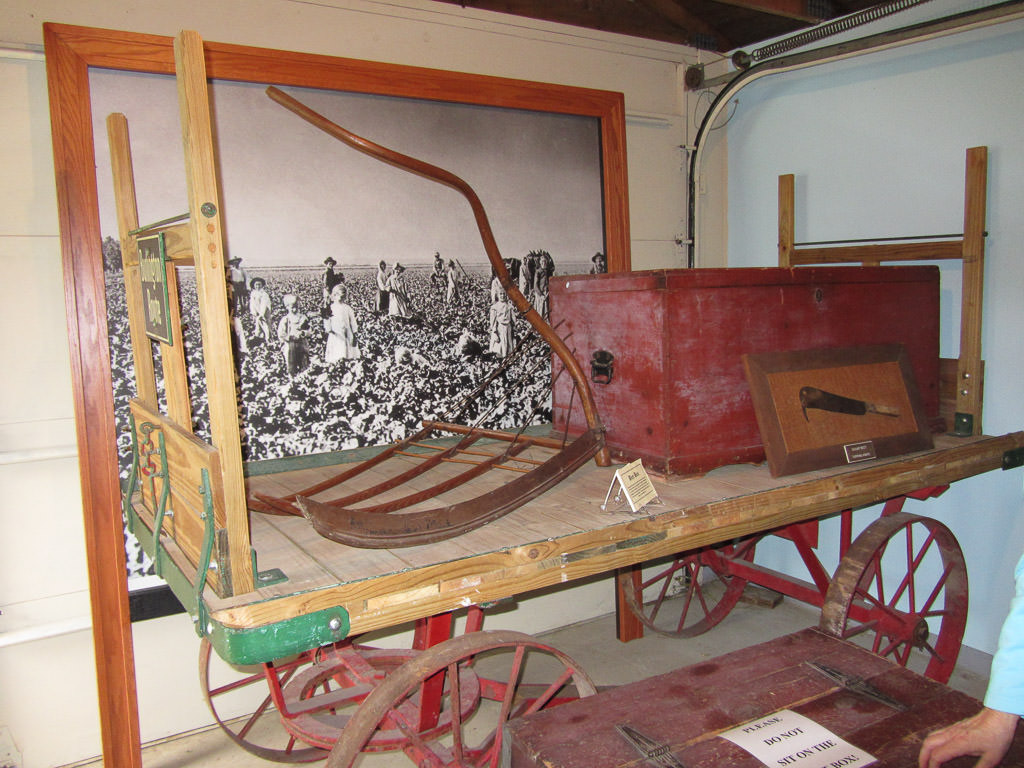 After watching a video, we toured a series of buildings on the property which had mostly been moved here from the surrounding neighborhood. A docent was our guide and we chatted about the foods from our culture that we shared, jars of sauerkraut, pickle making, and even pickled watermelons. We also stepped into St. Paul's Evangelical Lutheran Church, now part of the museum property, and were educated about the three religious groups that represented the Volga Germans: Lutheran, Catholic, and Mennonite.

After our tour, we did some research in files on the towns in Russia. There was much information on my father's village, but much less on my mother's. In fact, I saw that they wanted information submitted that they don't have, and realized I have something to contribute to my generation, and the future ones who may come here seeking to discover their family history.

As we camped alongside the lake at Pawnee State Recreation Area (just outside of Lincoln) that night, I sat watching the spectacular sunset and wondered if perhaps my love of RV life, and seeing new places and experiencing new things, grew out of my parents' stories of their moves both in the old world and the new. 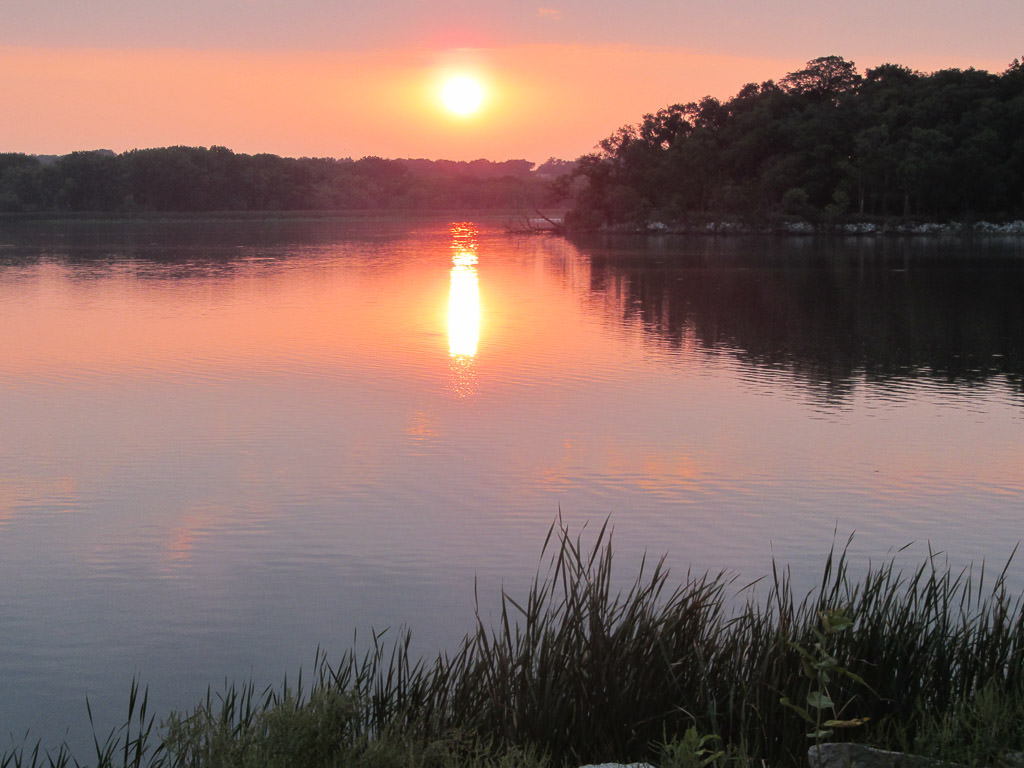 They traveled by boat and by train to their destinations, and then eventually by car. I have been fortunate, to travel by RV to some of the towns and cities where they came to love this country, and to try, just a little bit, to see it through their eyes.