Downpours and Flounder in Alaska 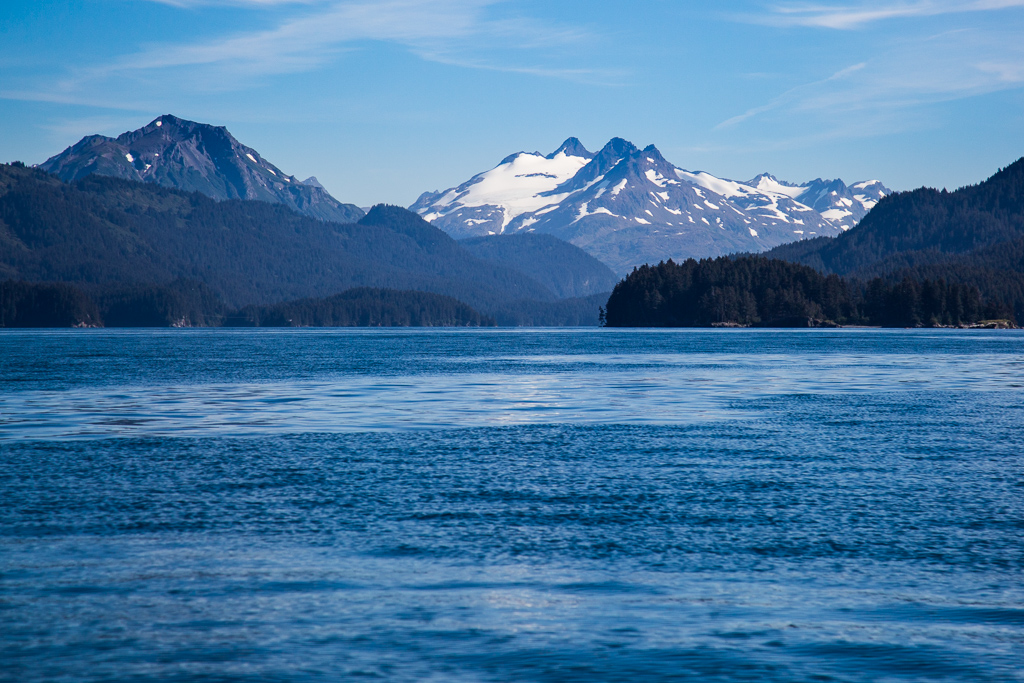 Homer definitely ranks in the top 5 places we visited in AK. The scenery is phenomenal and the ocean is an endless playground. From kayaking to fishing to watching the sunset from the beach, Homer has something for everyone.

After five days of record rainfall in Valdez, we finally reached our breaking point. In general, we are pretty hearty souls and a little rain doesn't usually phase us, but this was unlike any weather pattern I had ever experienced. During the peak of the deluge, you couldn't even open your eyes under the brim of a ball cap without a full scale, OSHA-approved eye flush. When the torrent abated, from the pounding pummel of a sizable waterfall to a mere deluge, we would venture out, completely clad in GoreTex and explore the incredible wilderness surrounding Valdez. I am certain that outside of the window of the perfect storm, Valdez would have been one of our favorite places in Alaska. However, after being cooped up inside the Winnie for what was surely the longest week of my life, patience was in short supply on the Famagogo homefront. I mean we just aren't used to being quarantined inside for that long of a stretch. But with the rainfall pattern holding steady in the forecast, we reeled in the awning, threw in the towel and set out in search of blue skies (or at least a downgrade to an intermittent drizzle). 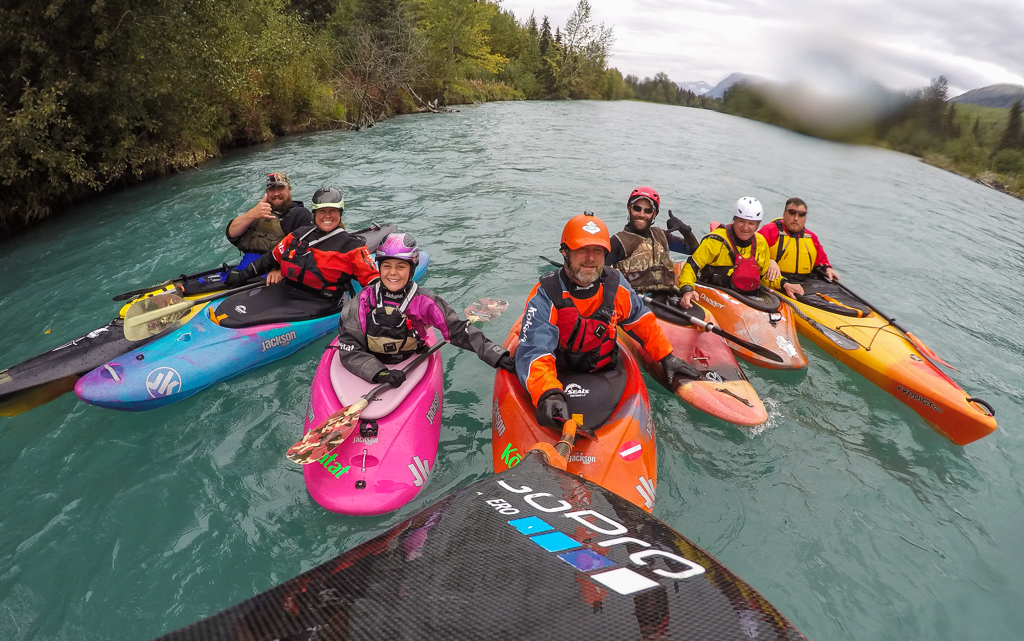 The turquoise waters of the Kenai river were reason enough to travel the Sterling Highway the entire length of the Kenai Peninsula. And of course, we had to spend a day kayaking on the Kenai!

We decided to head west down the Kenai Peninsula with nothing more on the agenda than to dry out and explore a new part of Alaska. We drove along the Sterling Highway that braided alongside the turquoise waters of the Kenai River through a deep valley lined with snow-capped peaks. As we reached the end of the road in Homer, the clouds parted scattering golden beams of sunlight across the narrow swath of land stretching out into Kachemak Bay. Like a beacon, the allure of the sun led us straight to the Mariner Park Campground at the mouth of the Homer Spit. We selected a site right on the waterfront and stepped out of Winnie the View into the glorious sunlight. And I can't be certain, but I think I heard a chorus of angels singing praises to the heavens as the blessed warmth of the sun shone down on us for the first time in over a week. 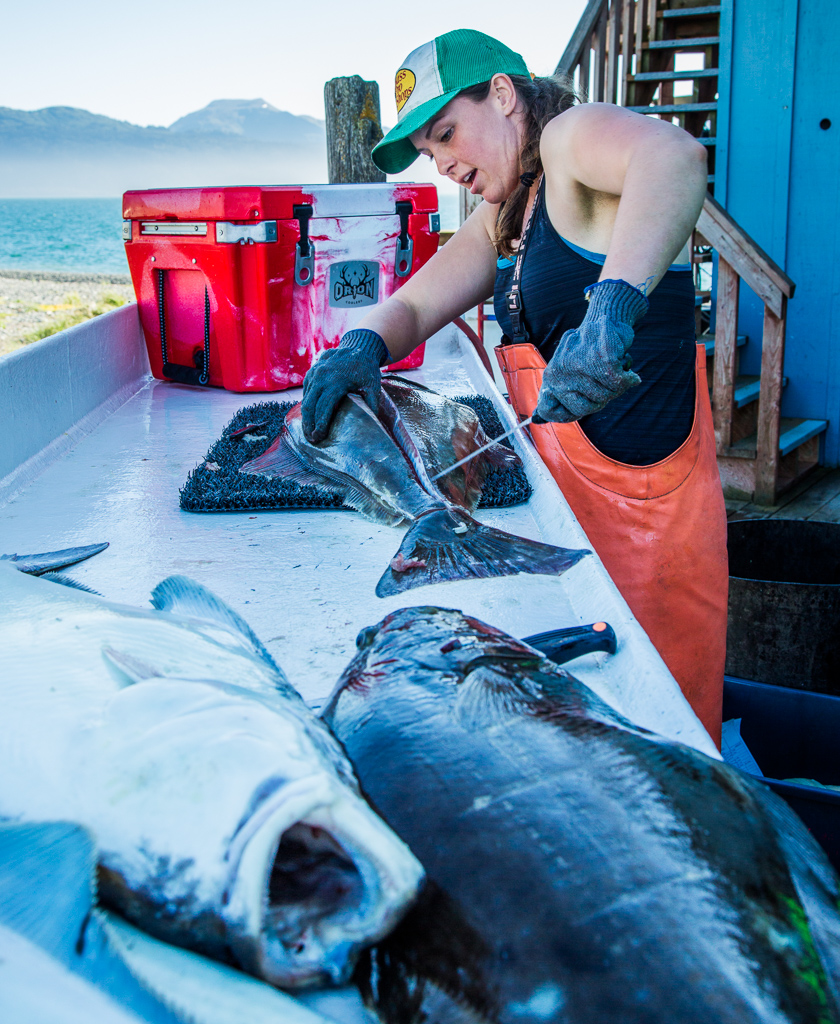 Anna can fillet a halibut in about a minute with the precision of a surgeon. It's an impressive sight to behold.

With a hankering for fresh air and exercise, we set out on foot to explore the Homer Spit. We discovered a boardwalk lined with souvenir shops, art galleries, and restaurants, but what ultimately caught my attention was the flurry of activity taking place right outside the unassuming headquarters of Central Charters and Tours. A fishing charter had just returned from a day at sea and the crew was busy filleting the eclectic harvest of halibut that were bigger than Abby, rock fish with their bulbous eyes and crimson flesh, sleek silvery salmon and a variety of other unidentifiable creatures of the deep. Instantaneously, a day of deep sea fishing shot straight to the top of my Alaskan bucket list. 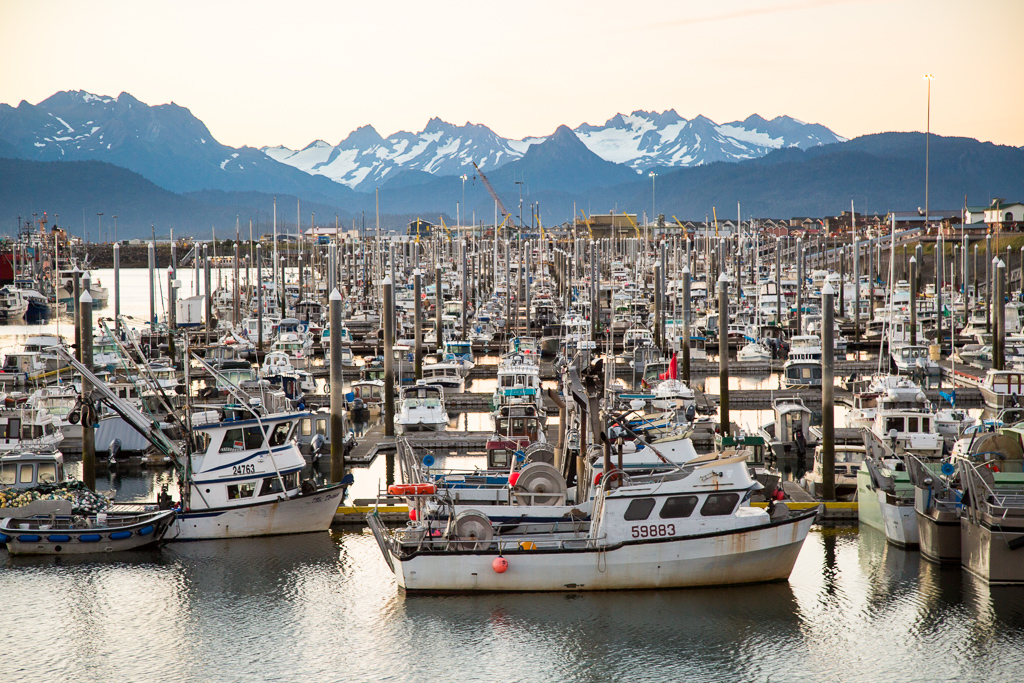 The Homer Harbor is an eclectic mix of watercraft. From the massive Coast Guard and Crab vessels to the water taxis and fishing boats, there is always something happening around the docks.

Two days later it was our turn to test our fishing prowess in the expansive waters of the Cook Inlet. We awoke well before dawn and headed to the harbor. As we descended the ramp leading to the docks, I spotted our boat, the Patriot, lit up in the early morning light and ready to depart. With a quick hello to our soft-spoken and down to business Captain, Drew, and our joyful first-mate, Anna, we hopped aboard and greeted a family from Rhode Island that would be joining us for our day at sea. We settled in and scarfed down our breakfast as we exited the harbor and headed out into the Kachemak Bay. Anna enthusiastically answered our ten million questions about fishing and life in Alaska and kept us entertained with incredible tales of huge fish and high seas adventures. Occasionally, our whale-whisperer captain would spot something in the distance and kill the engines, and as if on cue, a pod of whales would magically appear on the horizon heading straight for us. We sat mesmerized, as they drew closer, periodically punctuating the topaz surface with their water spouts until they were close enough that we could feel the mist of their breath on our faces. They would continueon, under and around us, their journey completely unfazed by our presence. As they disappeared in the distance, we would continue on our journey to the fishing grounds until we were interrupted once again by another magnificent species traversing the massive expanse of water. 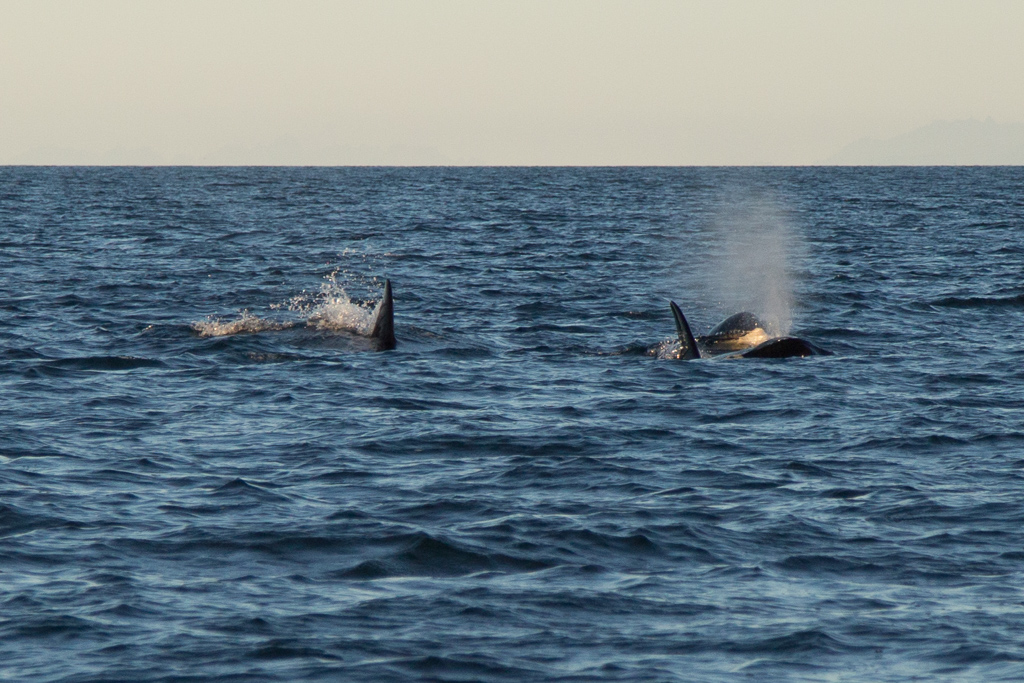 The pod of orca whales that Captain Drew spotted off in the distance, just as they resurfaced after passing under our boat.

Eventually, Drew silenced the engines and everyone set about the business of fishing. Anna led us to the back deck of the boat and showed us how to rig our lines with fresh cut baitfish and we slowly let our lines drift out behind the boat, one at a time until we felt the distinct bump of the bottom. I cranked my reel a couple of times to lift the bait of the bottom (about a foot) and then waited...for about a minute...until I felt a different kind of tug on the line. Seriously, a minute into my fishing, I had a bite. I reeled in the 300+ feet of line for what seemed like and eternity, my arm muscles screaming under the weight of my catch. After what seemed like five minutes, I caught sight of a flash of white through the inky blue water confirming that I indeed had a halibut on my line. It was by far the biggest fish I have ever caught - a whopping 45 lbs, and over three feet long. Anna helped me hoist it onto the deck and sequestered it into the hold of the boat. Meanwhile, Abby was in the midst of reeling in her first catch, a flounder that we returned to the sea, and then a shark... and so the day progressed, one fish after another until we had each caught our two halibut limit. 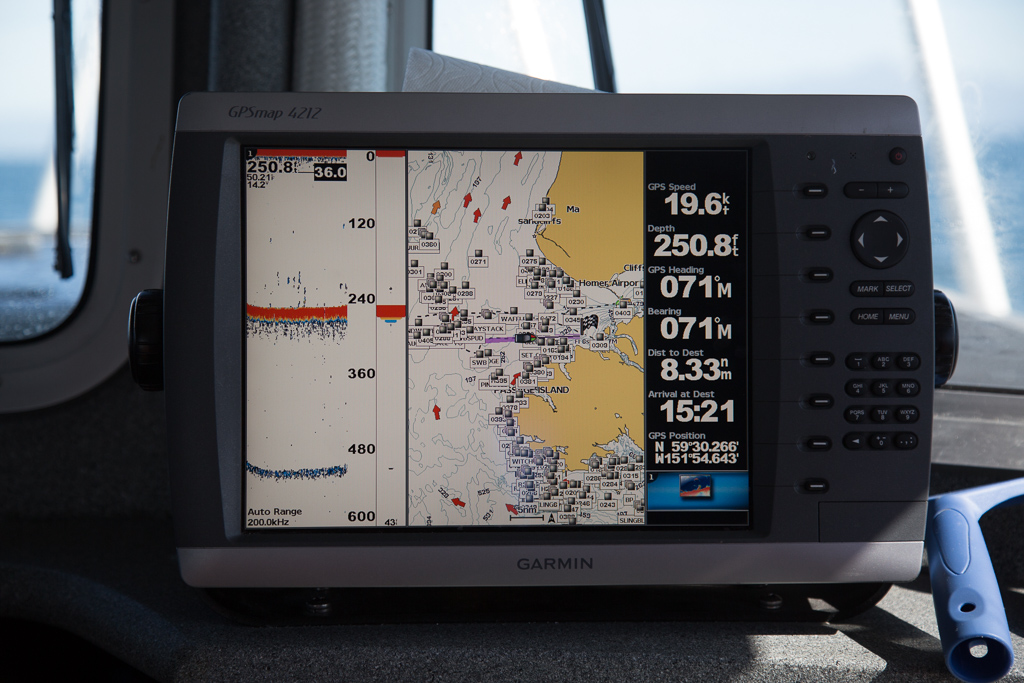 Captain Drew had literally 5000 fishing points marked on his GPS for any imaginable conditions. No wonder he landed us on great fishing within minutes! 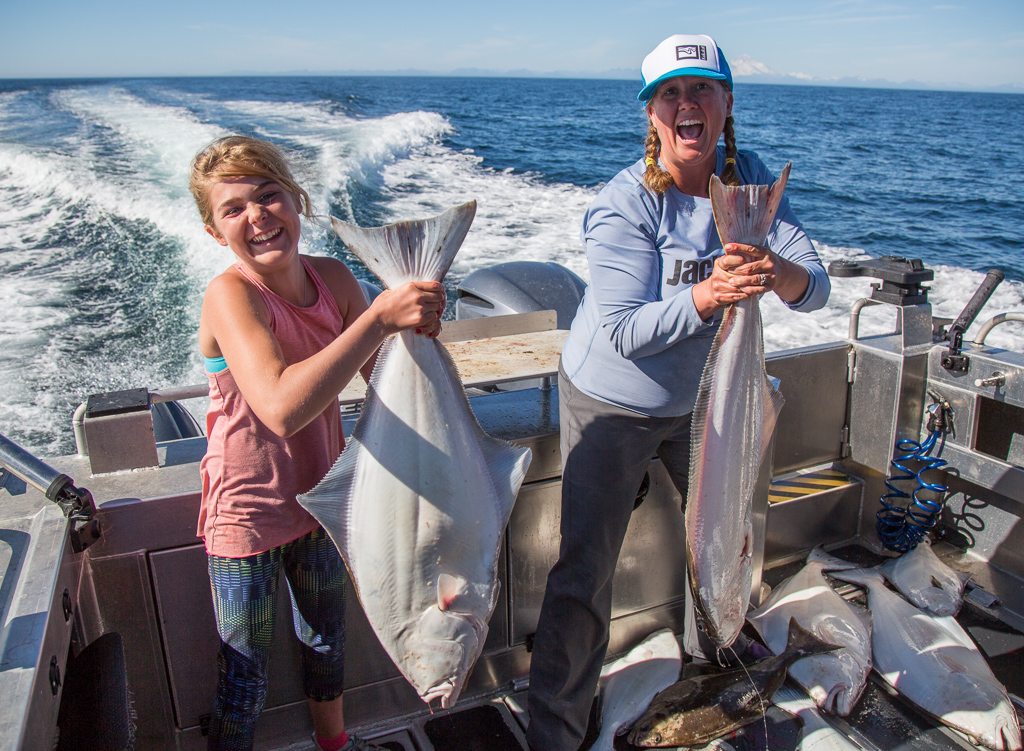 Abby and I had quite a time wrestling our massive halibut! 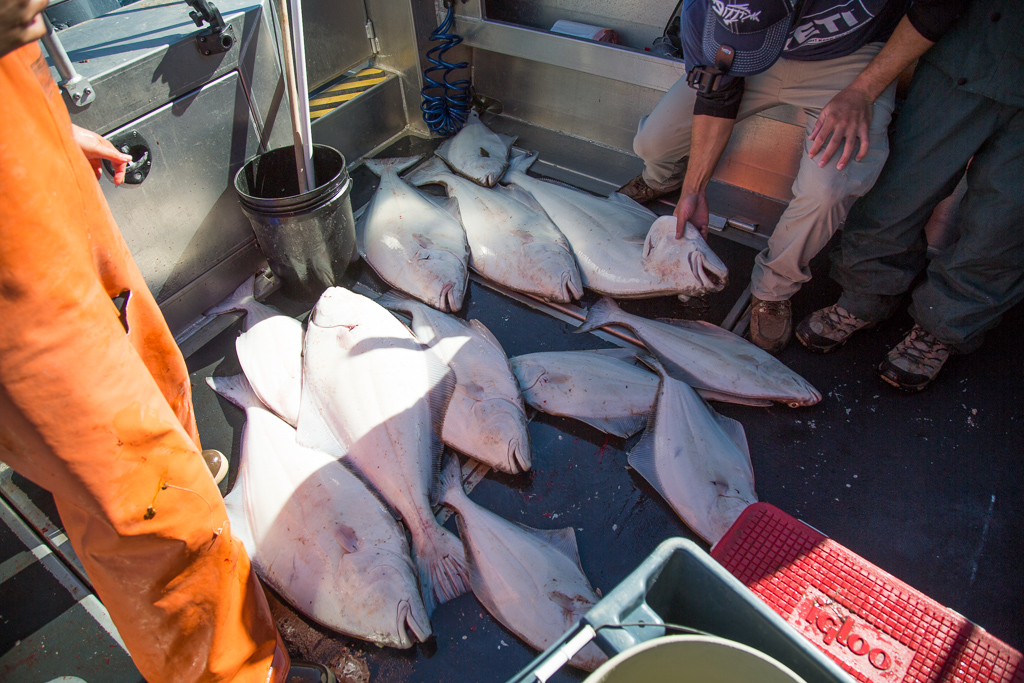 Halibut have an unusual anatomy. They are born with eyes on either side of their head, but as they grow, one eye migrates so that they are both on the same side, so that when they lie on their side on the ocean floor they can spot their prey better. Here, Peter shows us the side of the halibut with both eyes.

Completely content and exhausted after several hours of non-stop fishing, we came about and began our return trip to Homer. Captain Drew, never content with anything less than extraordinary, took us home through a spectacularly scenic side channel. He once again wielded his magnificent mammal location super powers, but this time, instead of a pod of whales, Drew pointed out a colony of sea otters. Abby squealed in delight as she discovered a multitude of pups interspersed throughout the group frolicking about and climbing up on their mother's bellies for a rest. Her excitement was amplified when she noticed the adults were holding hands, or rafting up, to stay in close proximity to each other. 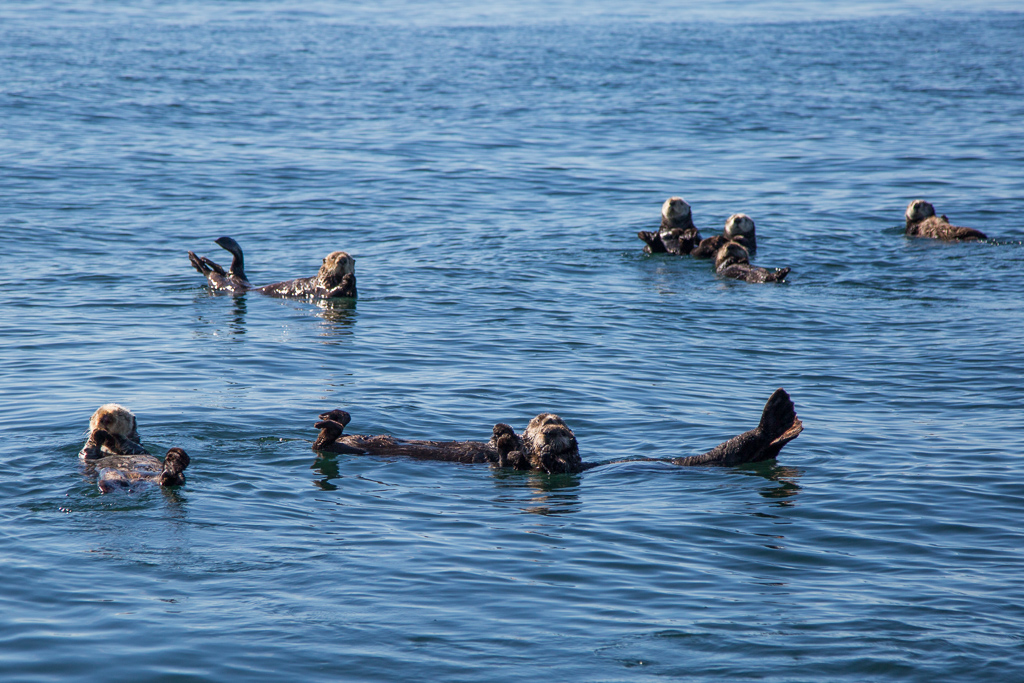 A raft of sea otters and their pups kept us endlessly entertained with their playful antics. Abby describes them holding hands as the cutest thing on earth!."

As we approached the mouth of the harbor, a somber silence enveloped us, knowing that our adventure was drawing to a close, each of us reflecting on all that had transpired over the past 10 hours. While we had expected a great day of fishing, we were completely surprised by the wonder of being surrounded by humpback and orca whales as they journeyed to destinations unknown, by the delight of spotting the often shy and elusive minke whale appearing right of the rail of the boat, and by the joyful exuberance that Abby expressed when watching the playful antics of the sea otters and their pups. Experiencing these remarkable creatures in their natural environment was an experience of a lifetime and one that will have a lasting impact on all of us. That, coupled with the sixty-five pounds of halibut we shipped back to the lower 48, made our time with Captain Drew aboard the Patriot, one of our favorite days of our entire Alaskan experience. With big hugs, we said our goodbyes to our fabulous crew and stepped back onto terra firma. We made our way back to the boardwalk on the Homer Spit and stood in front of Central Charters and Tours once again, but this time we stood to the side with pride as it was our catch that was on display.