Going to Disney World was never on our radar when we started our van life trip. We had originally intended on leaving from New Jersey to head west, hugging all the northern U.S. states until we got to the Pacific Ocean, only to head south to California for the winter. But after a series of unfortunate events and only having gotten as far as Minnesota when the blizzards and subfreezing temperatures started, we abandon our original plan and booked it south as fast as we could. We got chased all the way to Florida, which was still unseasonably cold to the point that lizards were falling out of trees.

Our trip to Disney World started off as a joke to see if there was any way that we could do it cheaply, or if it would be like lighting a pile of cash in a suitcase on fire. It was more of an exercise to see what the cheapest possible way to experience Disney was, while still having a good time, even if we didn't decide to go in the end. Obviously, I put together a complex spreadsheet with multiple scenarios. I enlisted the help of every Disney super fan I know (because we all have at least one). This turned out to be a HUGE help because I found out that two of my friends were Disney-bound the week we were attempting to go, and it also just happened to be Humberto's birthday. So, we were in a splurging mood. 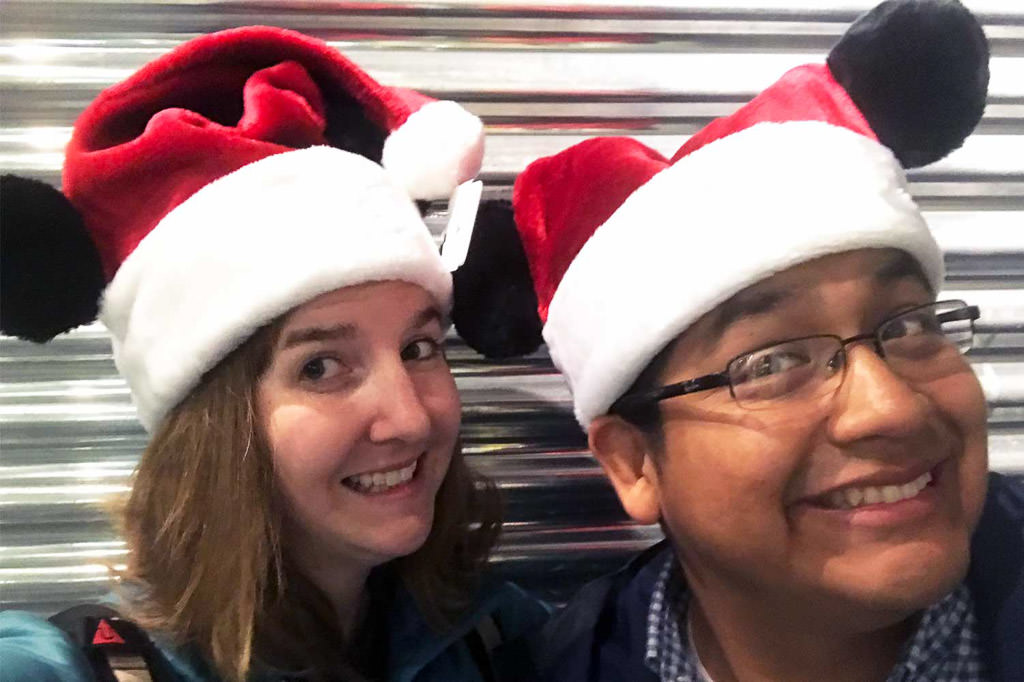 Festive head gear is a must!

But where to stay? With an RV and a dog, I looked into all the campground options in the area surrounding The Magic Kingdom and ultimately settled on Disney's Fort Wilderness. At $76/day + tax, it was a steal, considering we could leave the van at the site and use the free campground shuttle buses and/or boats to avoid the $20 parking fee at the parks.

We were also excited that they had a kennel right down the street from the campground. But since it was December, it was booked; so we had to look for other options. After calling about six places near the campground, we finally found Woof & Whisker's Resort, which had space for Lucy. It was about 35 minutes from the Magic Kingdom, but it was the closest option we had, and they only charged $136 for three nights and one full day of daycare. Plus, they upload photos of the dog playpen every day to their private Facebook group for helicopter pet parents such as ourselves.

Leaving Lucy behind is always heart wrenching for us (it's one of our main reasons we decided to RV). Especially when we dropped her off and heard her crying in her pen as we backed away slowly. (Don't worry she was fine.) Fort Wilderness does allow dogs as long as you have a climate-controlled vehicle and there is a nice large dog park for them. But we knew we would be at the parks for 12-14 hours a day, and it would not be fair to Lucy to have her sitting in the van all day. So, she got four days of dog playtime, and we got a 4-day, 3-park marathon-of-fun at Disney. Off to Fort Wilderness we went! 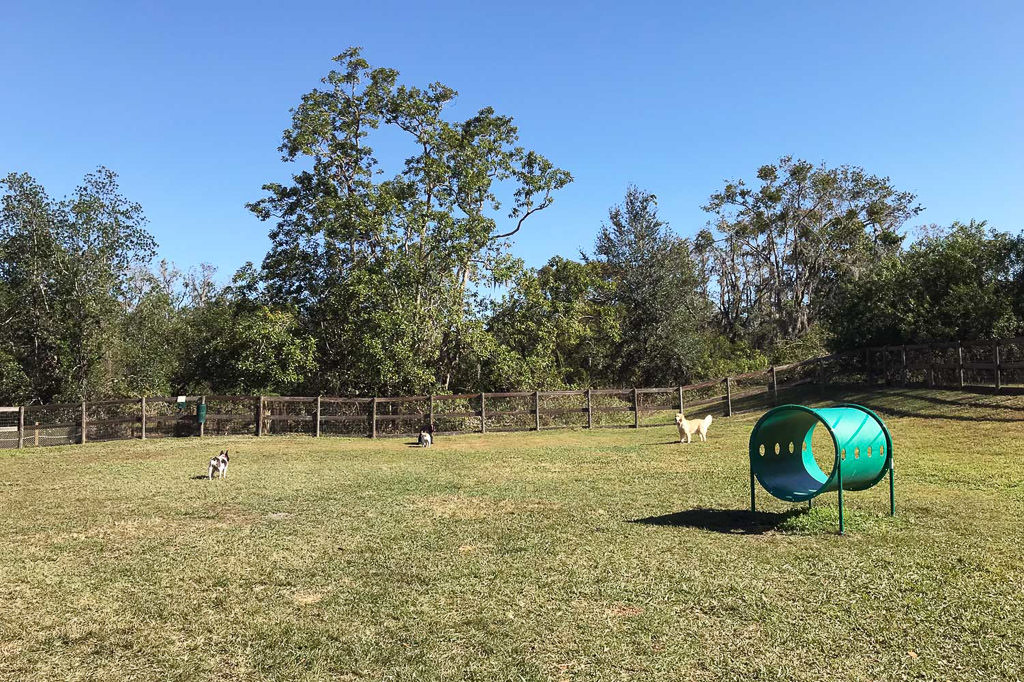 I have never been to Disney, so I was really worried about coordinating everything, having the right tickets, and making sure I left enough time to get to places and see all the things we wanted to see. I was immediately put at ease by the woman who checked us in at the campground. The check-in area resembles a multiple lane toll-booth that looks long, but moves quickly since everyone in line is in an RV. 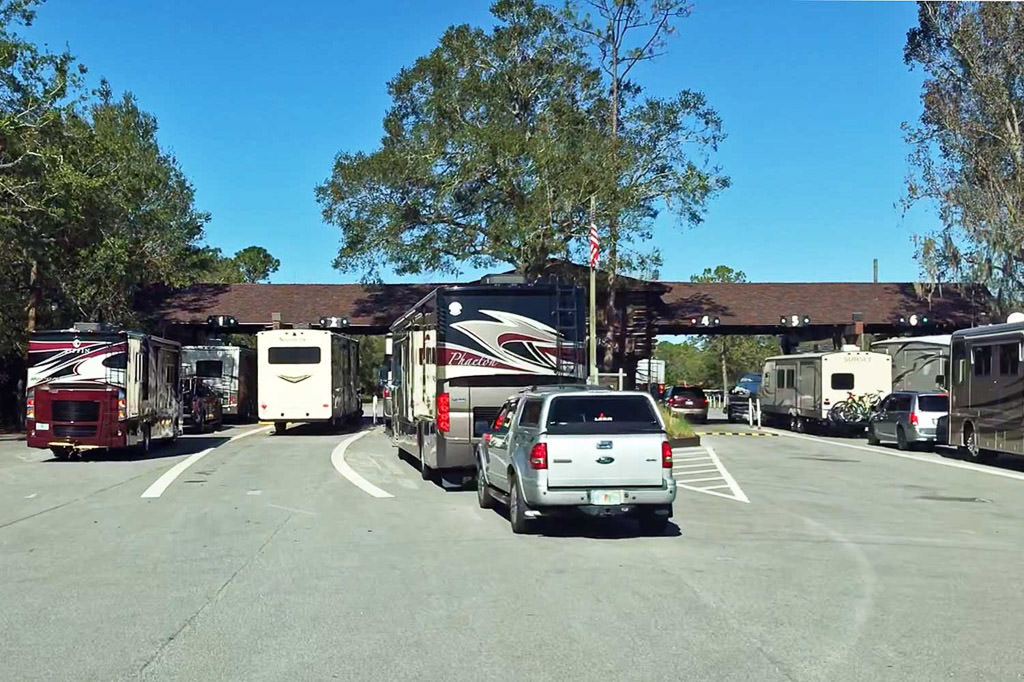 Luckily, it only took us about 10 minutes of waiting to get to the front, and the check-in woman spent at least 10 minutes to answer all my questions (and I had many). Plus, she prepared our Magic Bands and First-Time-Visitor/Birthday pins. All with a smile on her face, and a growing line of campers behind us.

I had no idea that the Magic Bands were already preloaded with our information, ie: pre-purchased park tickets and credit card information. Convenient, but dangerous since you can just scan it to purchase anything in the park or campground. Only people staying at Disney properties get Magic Bands, or you can purchase them in the park. It's not a necessity, but they were really nice to have to help you forget about how much money you're blowing on a giant turkey leg.

The campground is huge, but is broken into pods of campsites, each with their own Comfort Station, which include restrooms, showers, and laundry. We paid for a "tent" site, which came with a level pad, charcoal grill, picnic table, and water and electric hookups, but no dump station. 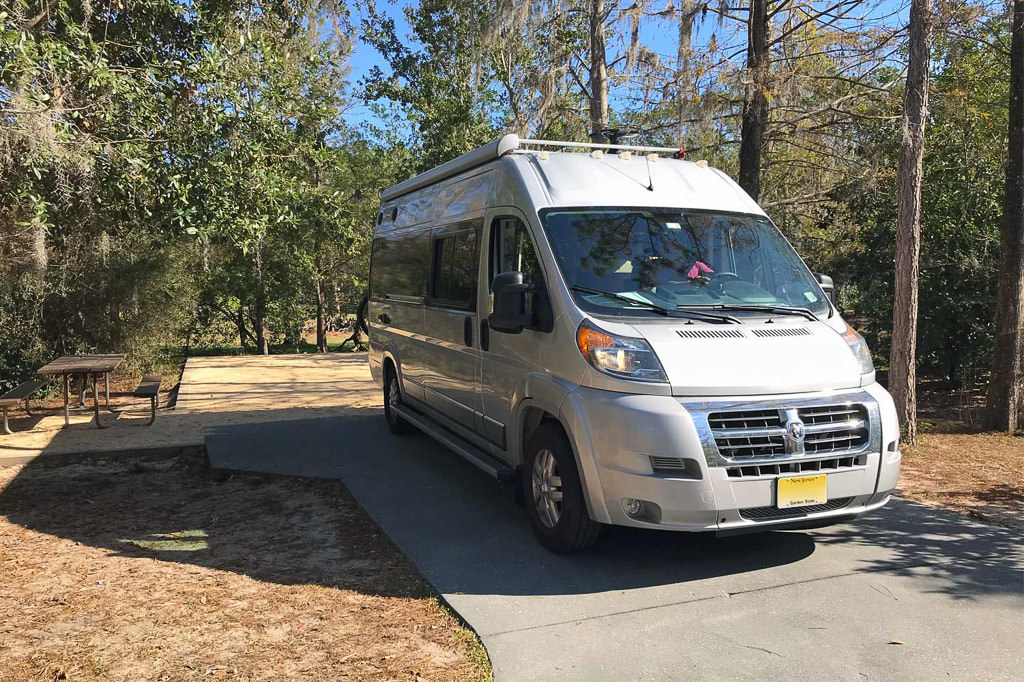 Our site, the power & water hookups are built into a faux-stump (not shown).

On our last day at the campground, we were able to call the front desk and have them direct us to an empty full-hookup campsite for dumping. If you do the same, make sure you call the actual front desk of the campground, and not the main Disney helpline, who does not work on site and hence has no idea what a dump station is.

The campground has its own shuttle system with multiple routes, which can get you to the off-site park shuttles or the various camp activities within 5-10 minutes from your site. Shuttle boats to the Magic Kingdom operate every 20 minutes from the campground marina and run for at least an hour after the park closes. The ride is smooth and only about 10 minutes long, but if you don't want to take the boat you can always take the shuttle buses to the parks. 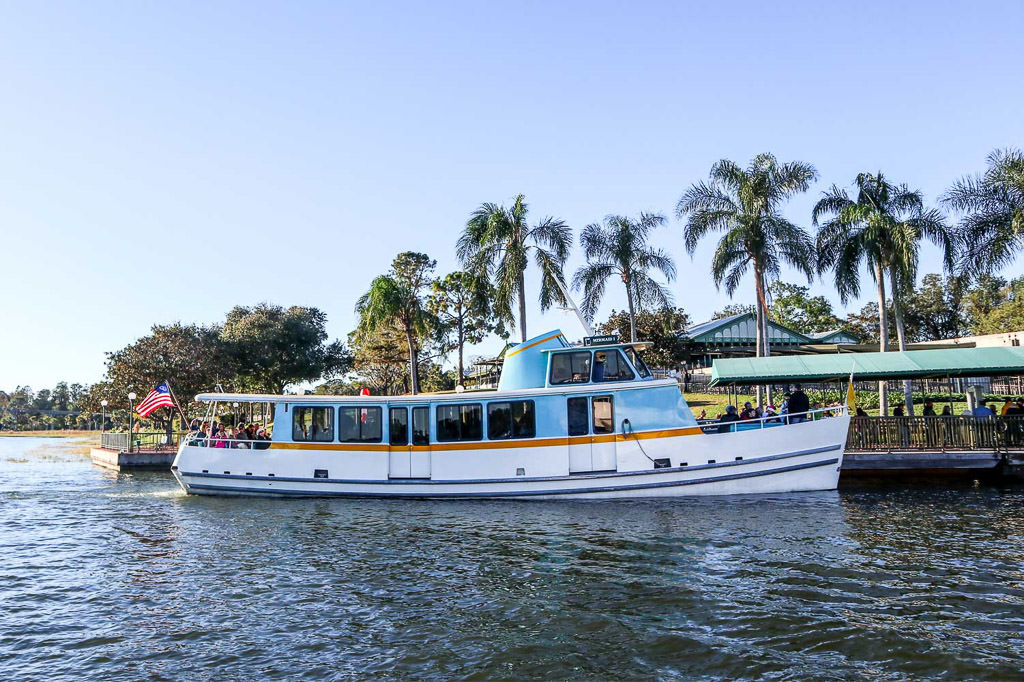 Taking the boat shuttle to the Magic Kingdom on the first night of our Disney trip was one of the campground highlights. We had tickets for Mickey's Very Merry Christmas Party, which is a night event, and saves you a little on park admission, since its only from 4pm-midnight. Since tickets are capped at a certain amount, there are a lot less people in the park than normal, especially after the day crowd leaves.

We were able to ride Space Mountain at 11:30 p.m. three times in a row before the park closed! Plus, there are TONS of free Christmas treats (to save on food costs), a Christmas parade, and the always magical Disney fireworks show that come with your ticket. After the park closed, we had the Fort Wilderness shuttle boat and campground shuttle bus almost all to ourselves. The bus driver even changed his route to take us directly to our campsite. Now that is good service! 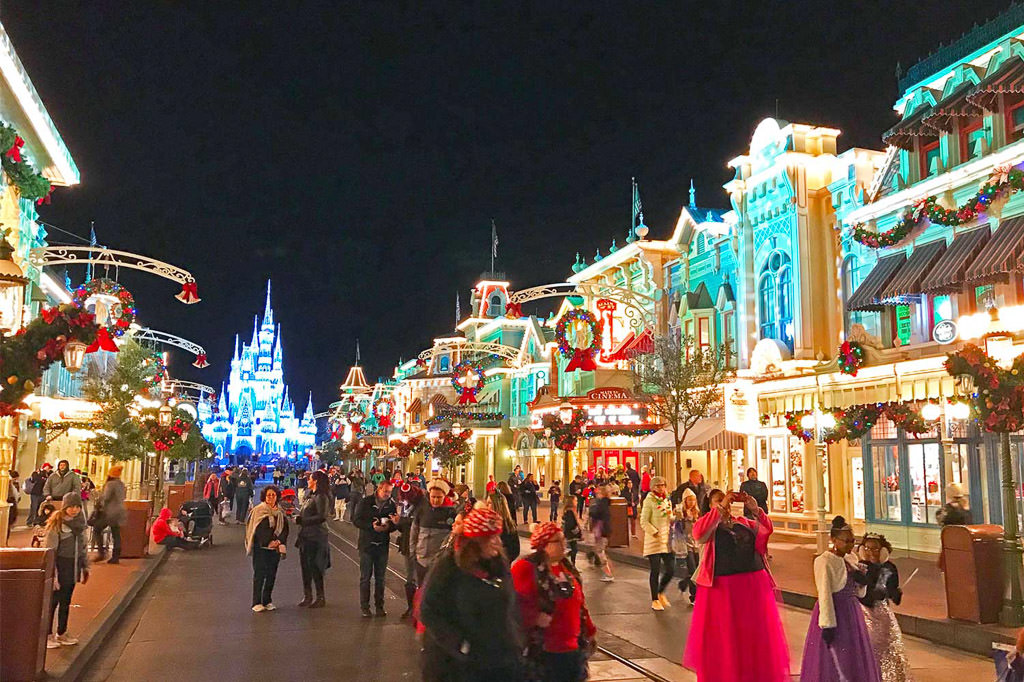 Disney World: The most magical (and crowded) place on earth!

We didn't spend a ton of time at the campground because we were at the parks the whole day, but if I were to go back to Disney, we would 100% stay at Fort Wilderness again. If the close proximity to the parks, the Magic Bands, and the whimsical Electrical Water Pageant you can watch from the campground marina are not enough reasons, the cost savings of not having to book a Disney hotel, but still enjoy all the Disney benefits are really worth it. 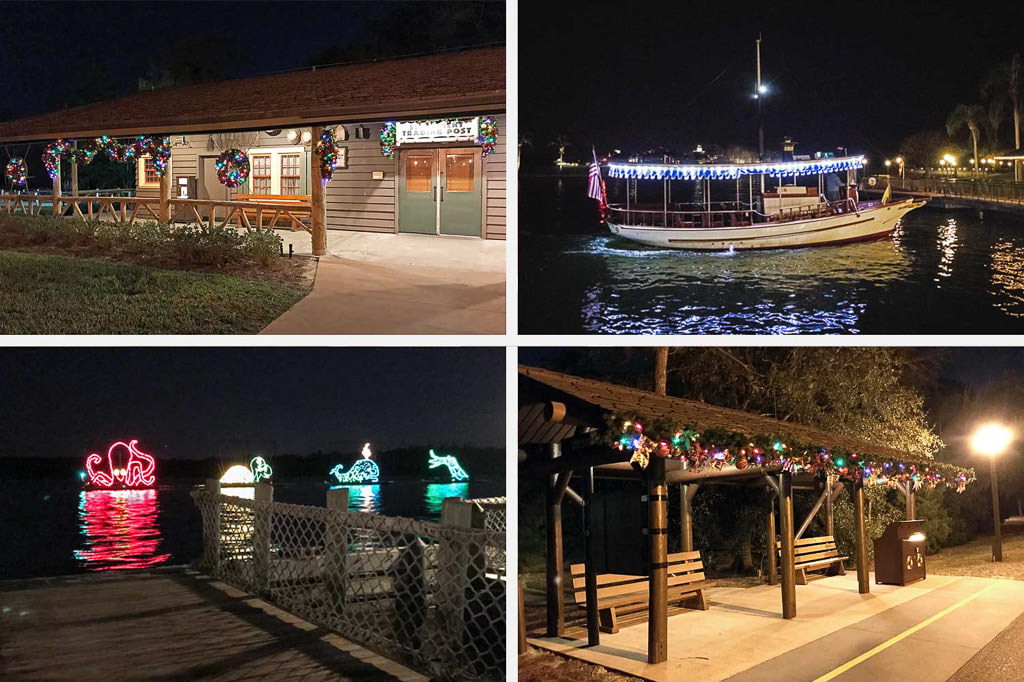 Fort Wilderness all decked out for Christmas, even the shuttle stops!

There are also tons of activities for people who don't use the parks, including: archery, swimming, boating, horseback riding, biking, movie nights, dinnertime shows, fishing, and tennis, and there is also a shuttle to Disney Springs, the Disney-themed entertainment and shopping complex. One night we had some down-time and took the shuttle boat to the Contemporary Hotel just across the lake and had drinks at the California Grill which overlooks the Magic Kingdom. It's a great spot to see the nightly fireworks from a different perspective.

Overall, Fort Wilderness was one of the cleanest, most festive campgrounds we have ever been to. Even the bus stops were decorated, and some campers went all-out to spread the holiday cheer at their individual sites. The customer service from everyone we encountered at the campground, from the 1 a.m. shuttle drivers to the maintenance crew went above and beyond to make everyone's experience enjoyable and it was a worthwhile splurge. Disney will definitely be on our radar next time we even come close to Orlando.

Tips for getting the most out of your Disney tickets

I find that the more expensive an outing is, the more we have to plan it out beforehand to get our money's-worth. Luckily, our friends already had a game plan to get the most out of the expensive Disney Park tickets. I also enlisted the help of undercovertourist.com to figure out what events were going on each day in each park, and which days would be the least crowded, therefore, most optimal to visit. They have itineraries based on how much time you have in each park, with color-coded maps on which rides to hit up first! We also downloaded the "My Disney Experience" app to our phones so we could see real-time park maps and ride times and obtain fast passes for certain rides.