Walmart founder Sam Walton's daughter had a dream. It was to bring art to the company's native town of Bentonville, Arkansas. Unlike William Randolph Hearst who used the profits from his publishing empire to shovel European antiquities willy nilly into the rooms of his castle, Alice Walton's vision of creating a museum of American Art makes the case that to be impressive, you don't have to be excessive.

Now that's not to say the Crystal Bridges Museum of American Art isn't a bit overwhelming, but it overwhelms in such an audacious and tastefully elegant way that no matter what one thinks about America's largest mass market retailer, you can't argue with the big heartedness of Alice and the Walton family to give their hometown, America, and all the world, a dazzling thank you gift that celebrates the success of their retail empire. 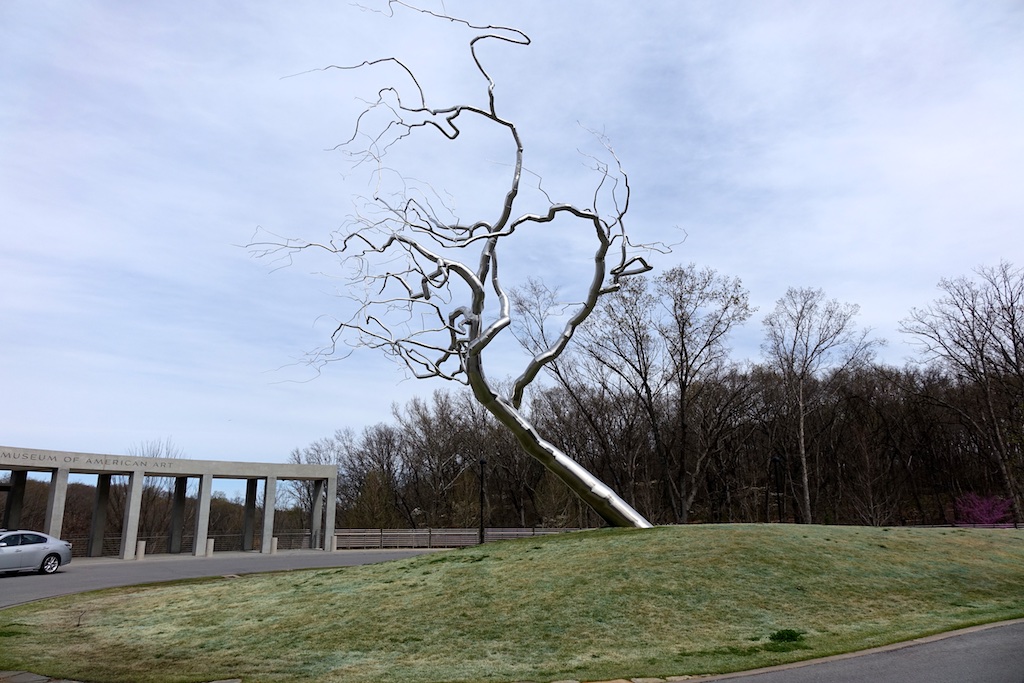 Almost there. The museum's high entrance is marked by a silver tree sculpture as you then descend by elevator to the main entrance.

As a reference point, let me start by explaining that, over the years, my wife Terry and I have sought out and toured through some of our country's and the world's impressive museums that include the Getty, Guggenheim (NY and Venice), Art Institute of Chicago, Metropolitan Museum of Art, Louvre, Musee d'Orsay, Frick, and the National Gallery along with dozens of international, regional and local museums. Seemingly overnight Crystal Bridges has planted itself firmly in this elite class. 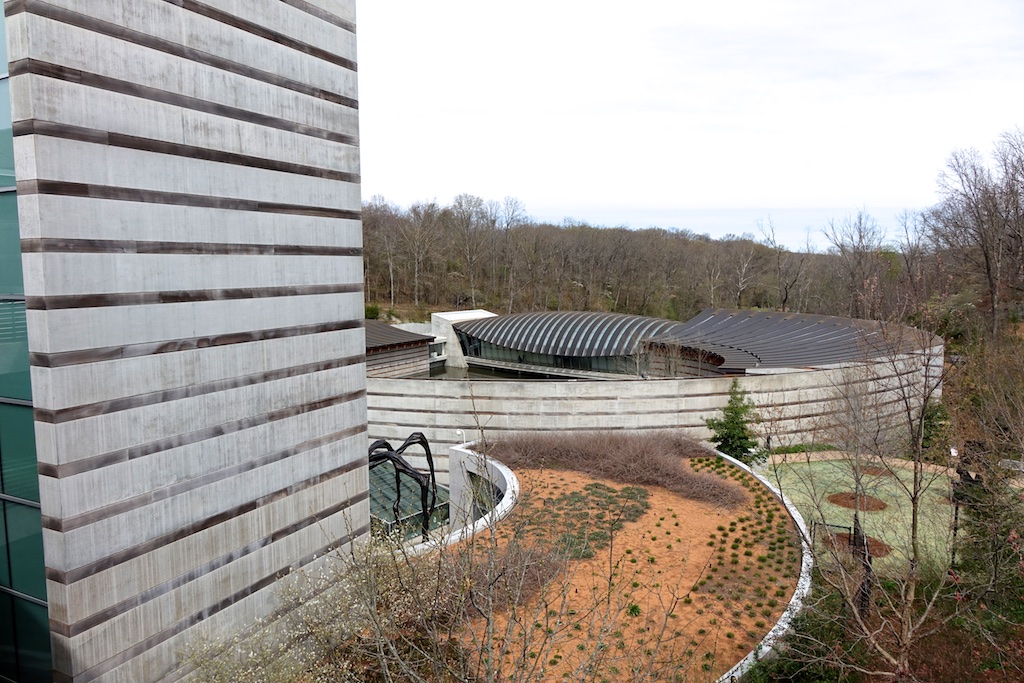 A glimpse of what's to come looking down at the main art wing.

It struck me that some of the Walmart DNA has worked its way into high art as upon entering the museum we were welcomed by two greeters (no, not in red vests) who directed us to the main desk. Admission to the permanent collection of the museum is free (another tip of the hat to Ms. Walton), but there was a charge for a temporary exhibit, "The Open Road: Photography and the American Road Trip" that definitely piqued our Winnebago wandering interests.

This "glad to have you" feel continued throughout the galleries that, unlike other museums we've been to, the docents in each gallery were happy to approach you to answer any questions and further explain the pieces. It was a gentleman in the first gallery that told me it's believed that Ms. Walton has now spent upwards of $2 billion dollars on acquisitions. And boy, does it show. 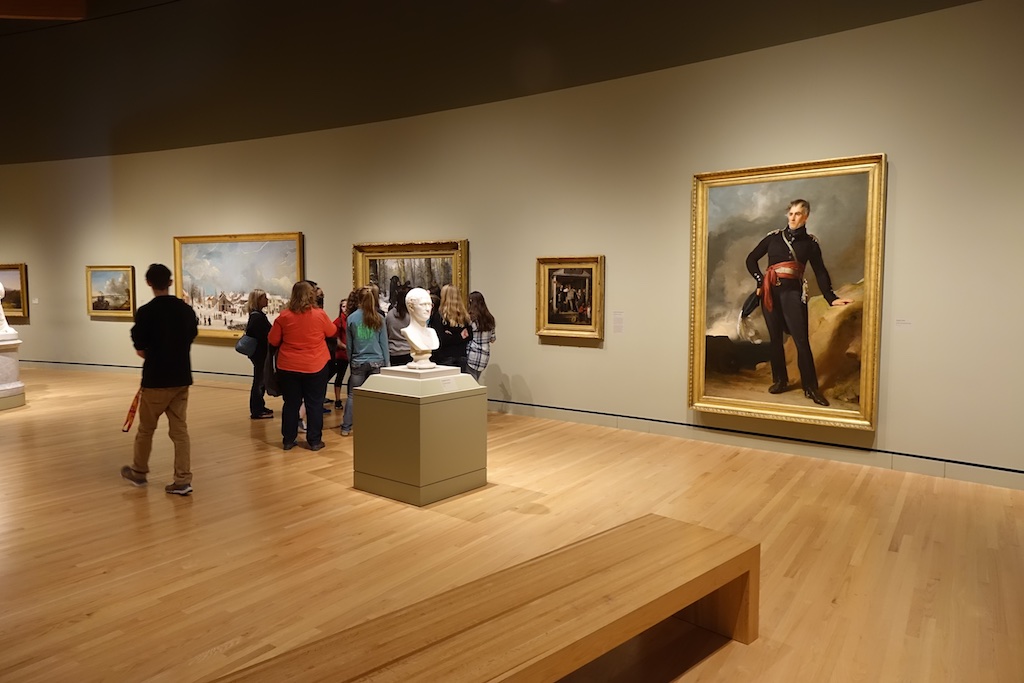 An artistic walk through time, beginning with the art at America's birth.

The interconnected galleries follow a timeline of art from America's revolutionary period up through today's most celebrated modern artists. It truly is a who's who of American art. And what's hanging on the wall or displayed on a pedestal, aren't the dusty leftovers found at an old estate sale. Nope, these are uniformly some of the top works of the artists. For example, there's a painting I remembered seeing in a book as a child called "Kindred Spirits." It was painted in 1849 by Asher Brown Durand who was a member of the Hudson River School of painters. It depicts the painter Thomas Cole and the poet William Cullen Bryant. It is astonishingly rich in detail and sense of place. And it's price tag for Ms. Walton was pretty astonishing too - $35 million. We're talking real money here. And how well spent it is. 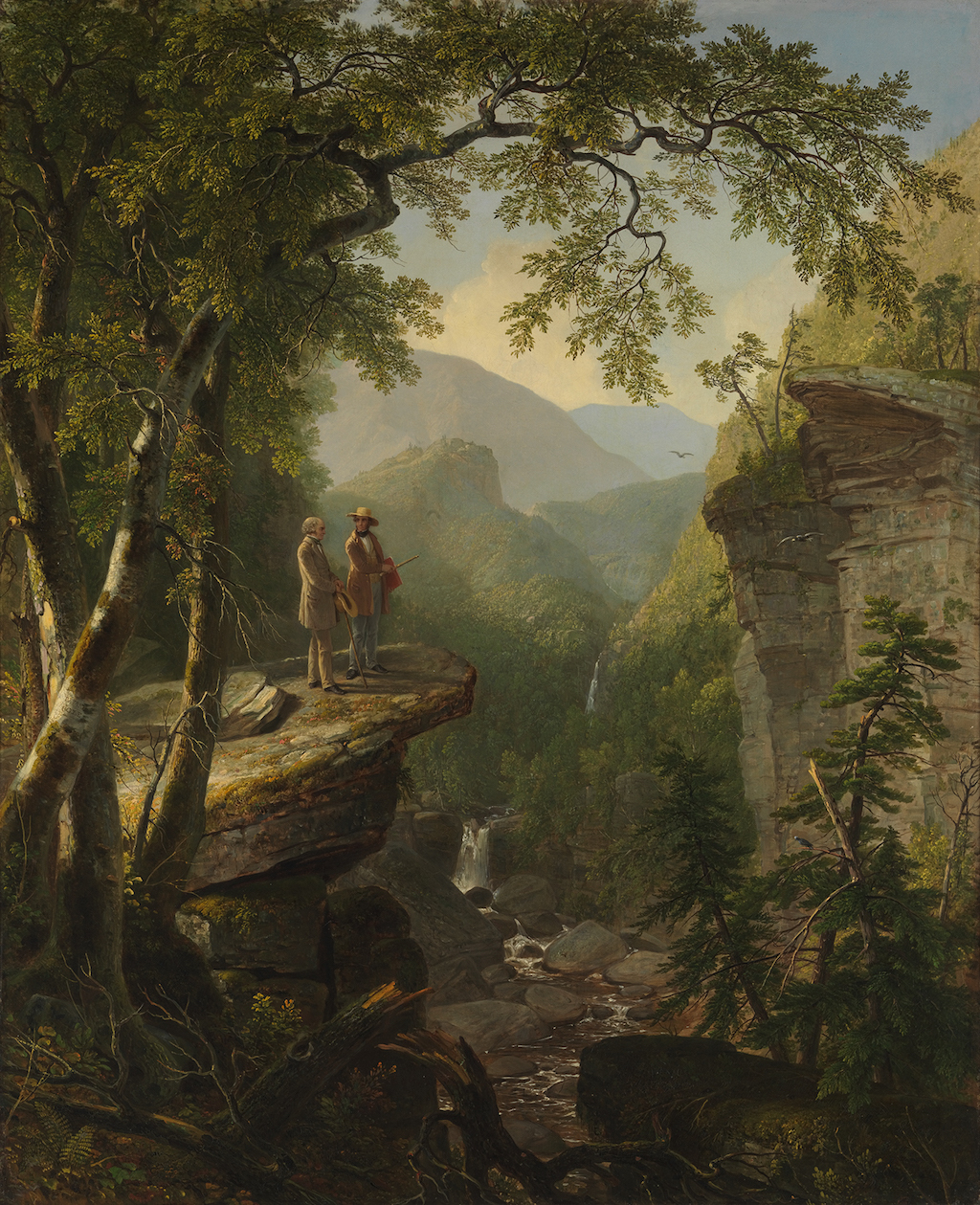 What struck me about the collection was how incredibly well curated all the pieces were. Sure there's a few omissions here and there, but that may have been because the collection is much larger than what's on display. Yet with every curve in the wall, turn into the side galleries, and transition between wings, there was continual surprise, delight, and a sense of discovery, all without letdown. Truly this is one of the most accessible collections we've encountered that fuses both art and architecture and, dare I say it, makes for one of the most "user friendly" museums we've ever visited. 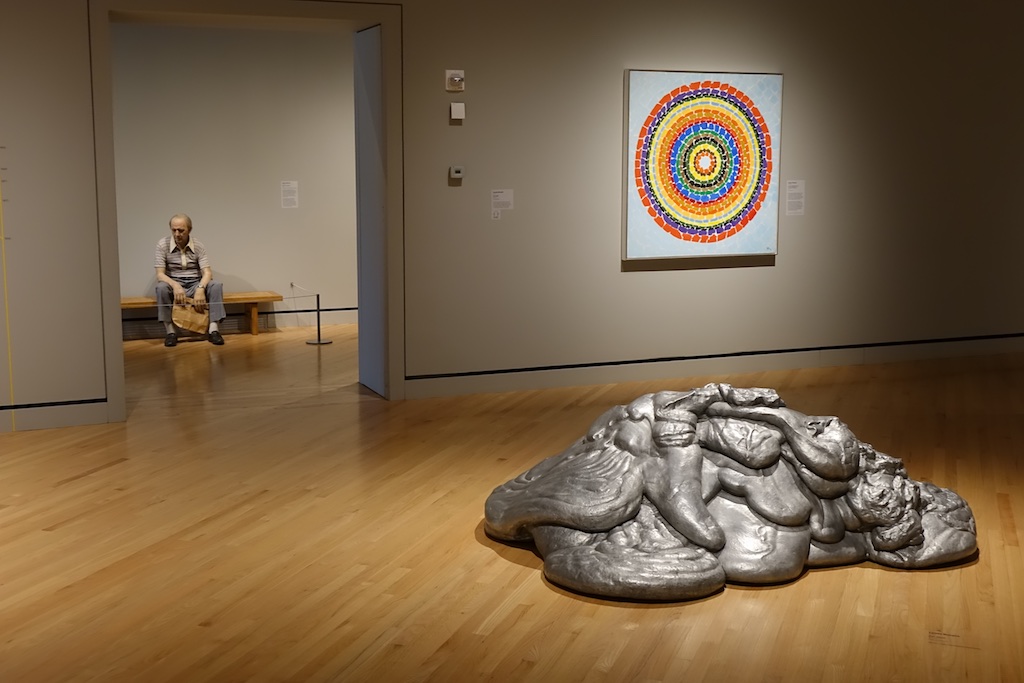 Modernism that fascinates and amuses. And yes, that's a sculpture in the background.

But don't let this lead you to believe that Crystal Bridges is "art for the masses." While brilliantly accessible, there is a great deal of historical, intellectual, and aesthetic sensibility behind the collection and presentation. Perhaps some of this is the benefit of starting with a clean sheet of paper to design a museum from scratch and then have the extraordinary financial ability to populate it with exquisite, carefully considered pieces. 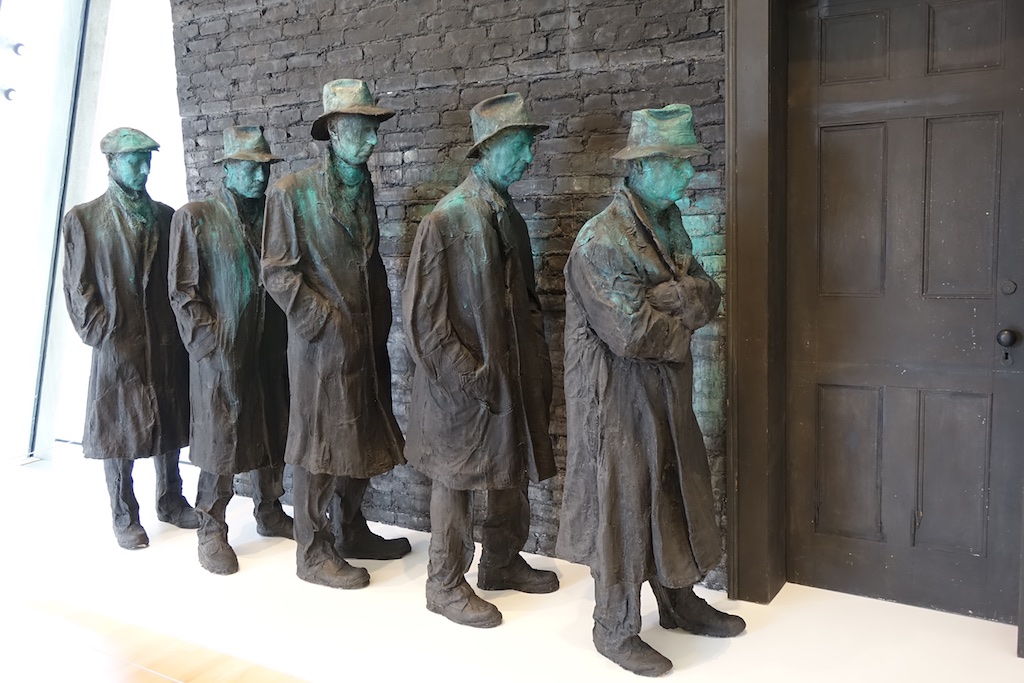 The site of the museum is in a wooded ravine of land the Waltons owned. From the upper parking areas and the entrance, the mass of the interconnected wings is nearly hidden and the breadth of the design does not fully reveal itself until you descend four floors down to the main level. Israeli born architect Moshe Safdie's long and distinguished career started with a bang when, just a few years out of architectural school he designed Montreal's iconic Habitat 67 for the World's Fair.

With many other signature buildings in his portfolio, as angled and efficient as his Habitat design was nearly fifty years ago, the Crystal Bridges arcs and flows in synchronization with the sloping landforms of the tiny valley it sits in the center of. 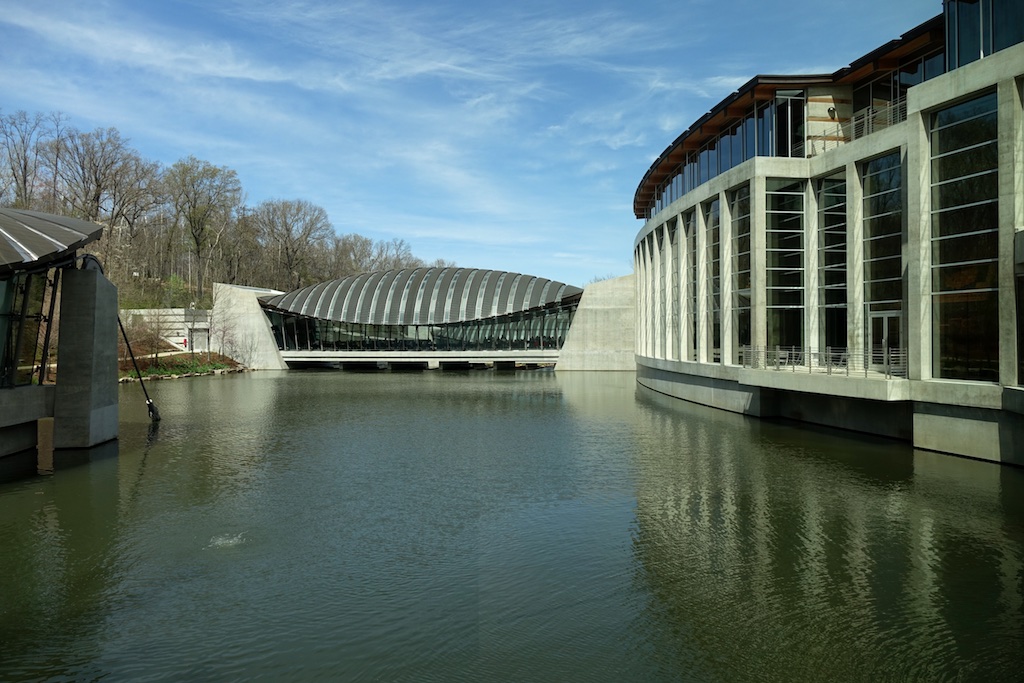 In the span of nearly a half century, Safdie's eye for functional design has continued to evolve. The main dining hall is one of two bridges connecting the museum complex.

And it is here where Safie's architectural vision becomes transcendent. Buildings on both sides of the central pond's banks are connected by two "bridges" one of which serves as the continuation of the gallery and the other as a large dining hall. The design showcases three distinctly different aesthetic aspirations. The first is the primary goal of providing airy, yet comfortably scaled gallery spaces. The second is an architecturally graceful atmosphere of upwardly sweeping beams rising over quiet oak floors. And the third opens the building to it's natural surroundings with skylights slicing between the beams and suspended floor to ceiling glass that appears to be nearly invisible. 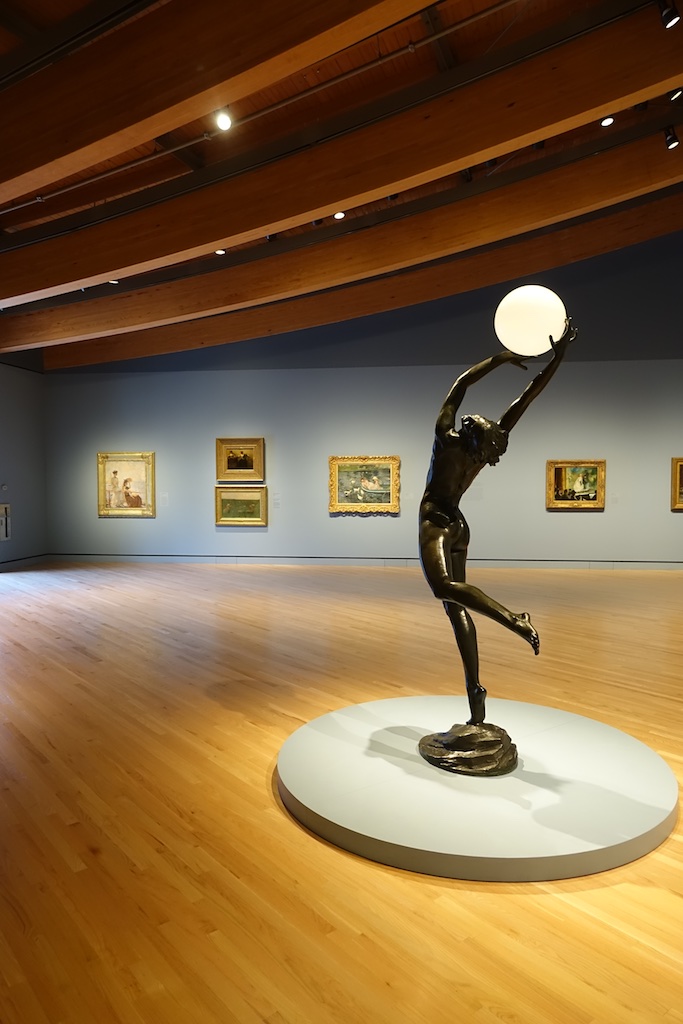 Architecture and lighting bring a superior collection to life. 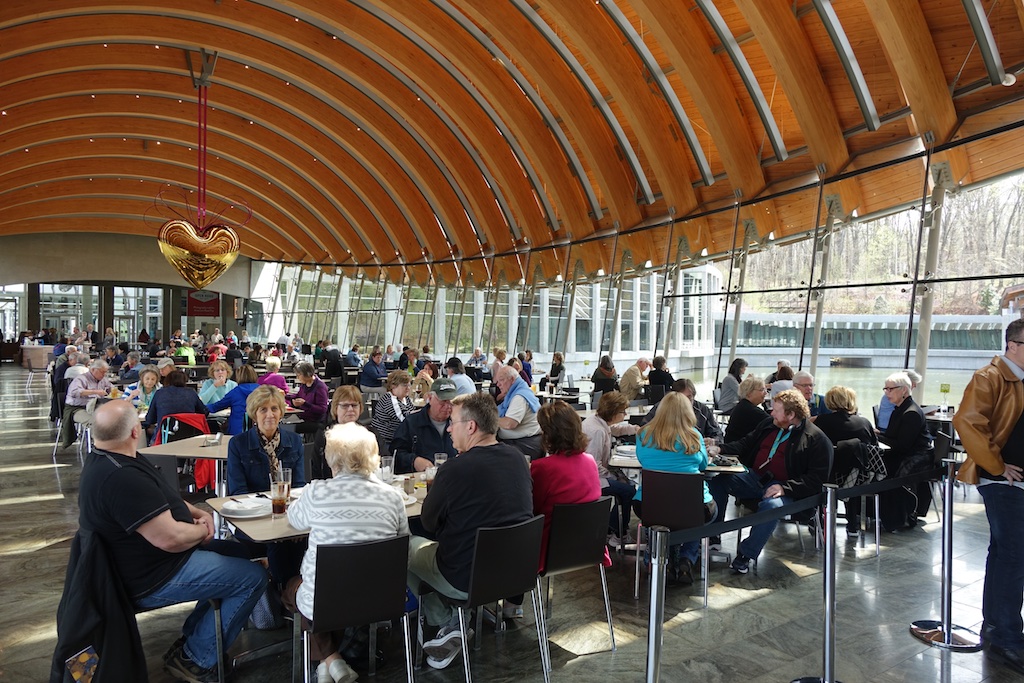 The museum cafe's excellent menu is served on a skylight lit bridge right off of the entrance in the background. 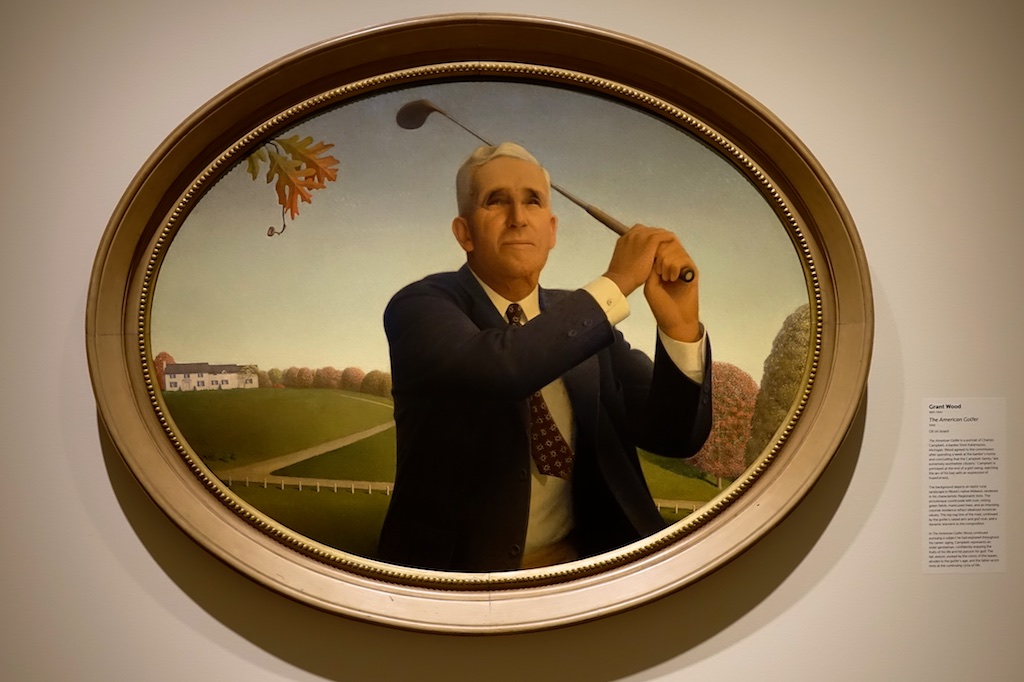 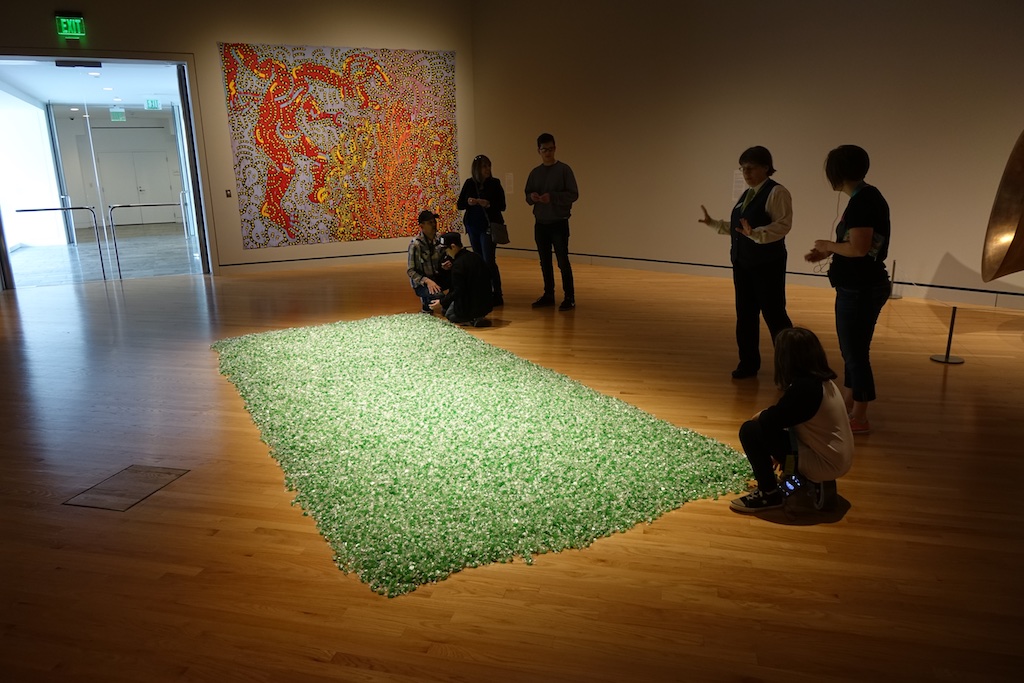 Good enough to eat. This installation is made of candy and the docents encourage you to take one.

It is impossible to decide which is more impressive, the museum itself, or the luminous collection it holds. Combined, they make for several hours of fully satisfying gallery touring as you could ever wish for. And thanks to Alice Walton's deep generosity and ambitious vision, the Crystal Bridges Museum of American Art soars beyond simply being a roadside attraction to an absolute must-see destination.

Visiting in your RV? The museum is fairly easy to get to off of I-49 and not far from the center of Bentonville. There is an outlying lot that is big rig friendly and we had no problems navigating in and out of it with our Navion and tow car. From the lot it's a few hundred yards along a lovely paved path to the entrance and there's also a recirculating shuttle bus. On the western edge of the Ozarks, there's plenty of rolling, forested mountain scenery to enjoy and a few commercial RV parks both north and south of town. Of course, there is also free ask-to-park overnight parking at several of the full-sized Walmarts in the area.